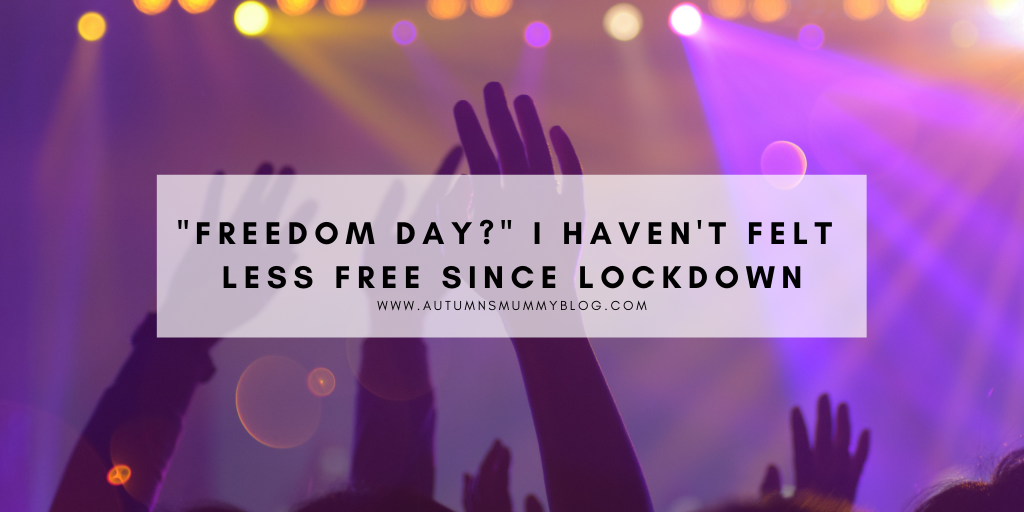 A month after it was initially supposed to happen, “freedom day” has finally arrived in England. So why is it that I actually feel a lot less free than I have in months?

Well, I think part of the problem is that SO MANY people around me have had to isolate or had Covid-19 recently. I haven’t been surrounded by so many cases since Christmas when we were going into the second peak in the UK. A child at Autumn’s nursery and a close relative have recently had it. Meanwhile, a teacher friend and several staff at local schools have been in isolation over the last fortnight. We were meant to have a man round to repair our windows today. However, he needs an assistant as he’s suffering from long Covid. This was going to be his son, but he was working on a site last Thursday with someone who has since tested positive for Covid-19. All I’ve seen scrolling down my Facebook feed today is restaurants and businesses unable to open as so many of their staff are in isolation.

Windows can wait, but it’s so upsetting that Autumn can’t finish her final week at nursery. Once again, life has snatched away special moments for her. She’s now missing out on her last days there with her best friend who is going to a different school in September. She’s also going to miss her end of year party. For weeks she’s been talking about wearing a party dress and been so excited for it. Now that’s off the table too. I just feel so sorry for her.

I love the idea of going out without a mask on. Especially on days like today when it is absolutely boiling and it feels like I’m melting anyway, without having layers of material over my mouth and nose. Over the last few months, I’ve noticed less and less parents wearing masks in the school grounds. While I’m sure that some of them genuinely can’t wear them, I’m certain that there can’t be that many people who are flouting them for medical reasons.

From today, even less people will be wearing masks. The expectation of social distancing that was already beginning to wear off is now gone.

I have to admit I’ve felt less comfortable going places in the last few weeks with cases rising once again. It had been really lovely around late April and early May to finally feel comfortable going to shops and browsing. Last year I pretty much shielded as I was pregnant with our rainbow baby. Of course, when he was born in January we were in lockdown. However, for months afterwards I still kept us quite isolated as I had nightmares about having such a young baby in ICU again. My husband and I were the only ones to hold him for months.

Obviously I didn’t feel free in lockdown – and with today’s “freedom” I feel I have become less free once more. I’m sure many others can relate in feeling like they want to become something of a recluse again, especially those who are particularly vulnerable. I know that if I ventured into a shop tomorrow, several people would get far nearer to me than I was comfortable with and would not be wearing a mask. Perhaps I’ll feel a bit better when I have my second jab next month, but at the moment I certainly don’t want to take the risk.

Unfortunately there is such a lack of respect from many people in our society today. If it wasn’t glaringly obvious enough before Covid-19, this has emphasised it even more. As long as they’re okay they simply don’t care about anyone else. For many of us who have lost people we care about in the last 18 months and who are related to or friends with vulnerable people, there is still much concern.

On that note, I’m just going to leave this wisely worded tweet here.