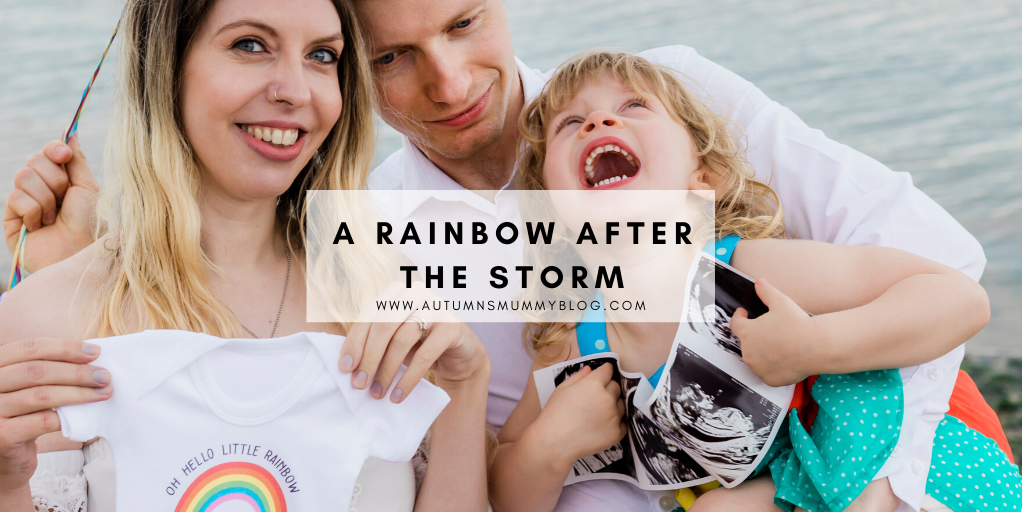 Trigger Warning: Miscarriage¦ This has been a crazy year for everyone, I know. I don’t think any of us have had quite the 2020 we envisioned! If you’ve been reading my blog for a while, you’ll know that I suffered a miscarriage in early December 2019. A shell of myself, I managed to throw myself into Christmas which helped for some time. However, with festivities out of the way, after my birthday in January, my mood started to fall again. I started having counselling which really helped…and now a rainbow baby has emerged after the storm!

My husband and I got to a place in our lives last summer where we felt it was finally the right time to start trying for another baby again. The first time I’d come off of birth control, Autumn had come into fruition really quickly. This time, months passed. Sometimes early pregnancy symptoms taunted me, only to be signs of yet another period. Then in November, I took a pregnancy test as I’d been doing each month. I was expecting another negative, especially as I hadn’t noticed any symptoms. To my surprise, it was a positive and I let out a little scream before running to let my husband know.

Even in my first pregnancy I was worried about miscarriage. This time round, I was even more concerned. Maybe something inside me knew? I’d supported several women in the miscarriage community on Twitter and it just seemed so dreadful. I couldn’t even fathom how I’d cope if it happened to me. Nevertheless, I tried to remain positive. Then in early December at 6 weeks on the dot, I had some discomfort, then bleeding. I knew exactly what was happening.

Wishing for a rainbow

I started counselling in January and slowly began to heal. We continued trying, but months passed still. I googled and saw that lots of women had trouble conceiving a second time round, even if it had been quick and easy the first time. Although I’d had scans after the miscarriage, I still worried that there was something wrong with me. I felt pressure. I discussed this with my amazing counsellor, Naomi, and we decided that that month I’d just relax and kind of take a month off in a way. No worrying about where I was in my cycle and ovulation tests to the extent I had for the previous 9 months or so. Still, at night when I couldn’t sleep, I lay in bed staring at the ceiling wishing for a rainbow to come after the storm.

My cycle was weird that month and then it was taking a really long time for my period to come. How we didn’t realise what was happening sooner, I don’t know. It was only after noticing a couple of changes in how my body physically looked that my husband suggested taking a test. I wasn’t really sure what I expected this time. I wanted a positive, but I almost didn’t dare hope that it would be. Of course, it was.

Almost instantly, I was riddled by sickness. Morning sickness? Yeah right, it was there all day and I was throwing up in the early hours of the morning. When that finally passed, migraines and headaches hit every day. In fact, that’s where I still am now.

I’ve taken things slowly, cautiously, daring to be positive but trying to prepare for the worst again. Experiencing miscarriage makes you so much more anxious. Every cramp and pain is a possible sign that this little miracle rainbow baby is not here to stay. It’s taking a lot of work mentally to remind myself that it is probably actually my body stretching and growing to accommodate this little one. I’ve had a few private scans with a fantastic local company for reassurance and every week feels such a milestone.

Of course, support is one of the most helpful things you can have in a pregnancy. Particularly one that’s tough or one after loss, I think. This little rainbow baby has had me needing support for both, as I’ve been so ill. I was never this poorly in my first pregnancy with Autumn. However, family have been so lovely and helpful. Autumn has been so understanding for a 3 year old, too! She’s been making me pretend drinks and food in her play kitchen. She’s put a blanket over me and told me to have a nap. Autumn has even been holding my hand to make me feel supported when I’ve felt dizzy.

As for my husband, he has also been absolutely amazing. I couldn’t have got through any of this without him.

So, onwards and upwards! We’re so excited about the joy this rainbow baby will bring to our family. I’m just hoping, firstly, that this little  one does make it earthside. However, I’m also hoping as it’s due in January that it doesn’t arrive too early. I want my Christmas dinner!!!!

Thank you to Robert Marriott Photography for taking these wonderful photos and more, too. I had ideas in my head, you had ideas too, and it all came together just as I’d imagined it 🙂

Dave and I will cherish these forever, I just love how the joy and hope radiates from every one of them.

4 thoughts on “A rainbow after the storm”