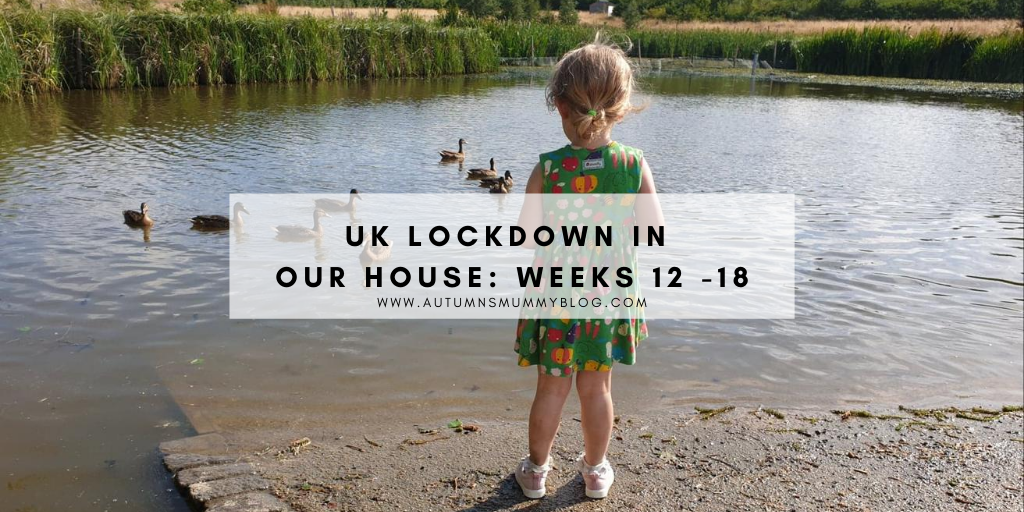 Is this still lockdown? I’m not sure anybody knows quite what it is anymore! I mean, most things are back open, but in another respect things still aren’t ‘normal’. Although, what is normal, anyway? It’s looking pretty likely that things won’t ever be quite the same again, or at least not for a long time. In many respects, we are still acting like we’re mostly in lockdown. This is largely down to the fact that I recently found out I’m pregnant! (This is also the reason my lockdown updates have been abysmal!!) In spite of mostly being at home still, we’ve actually done a lot over the last 6 weeks!

One of the positive things about lockdown has been that it’s given me a lot more time to spend in the garden. Autumn and Maisie have also been enjoying it, spending a lot of time as my gardening buddies! Autumn has loved helping and I’ve been teaching her a lot of basic gardening skills. She loves seeing the results! 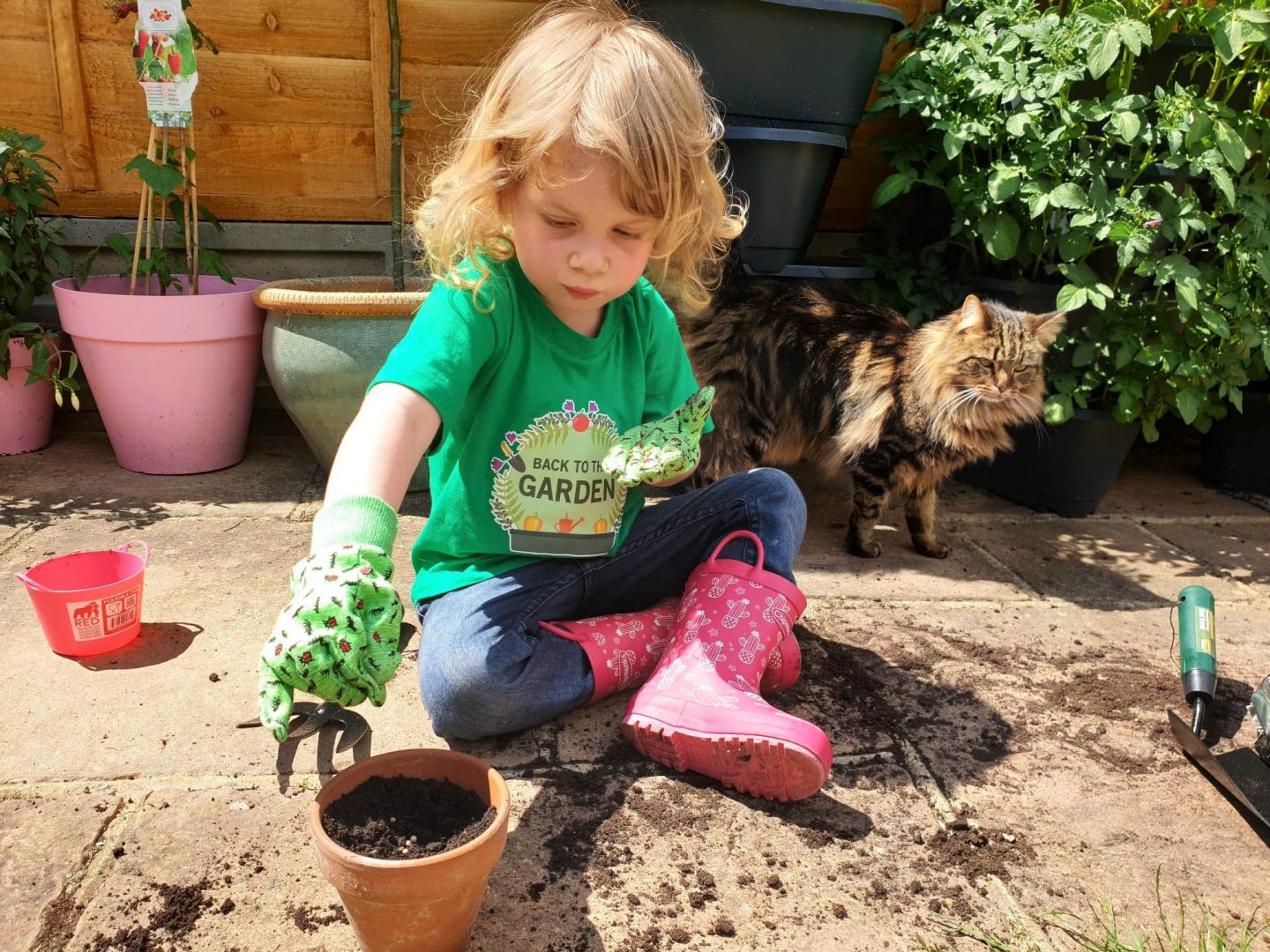 So far we’ve eaten strawberries and raspberries from our garden. We’ve also just harvested a couple of figs which I’m going to attempt to turn into fig rolls! I’m currently drying them out in the oven. I’m hoping even just this stage will be a success! 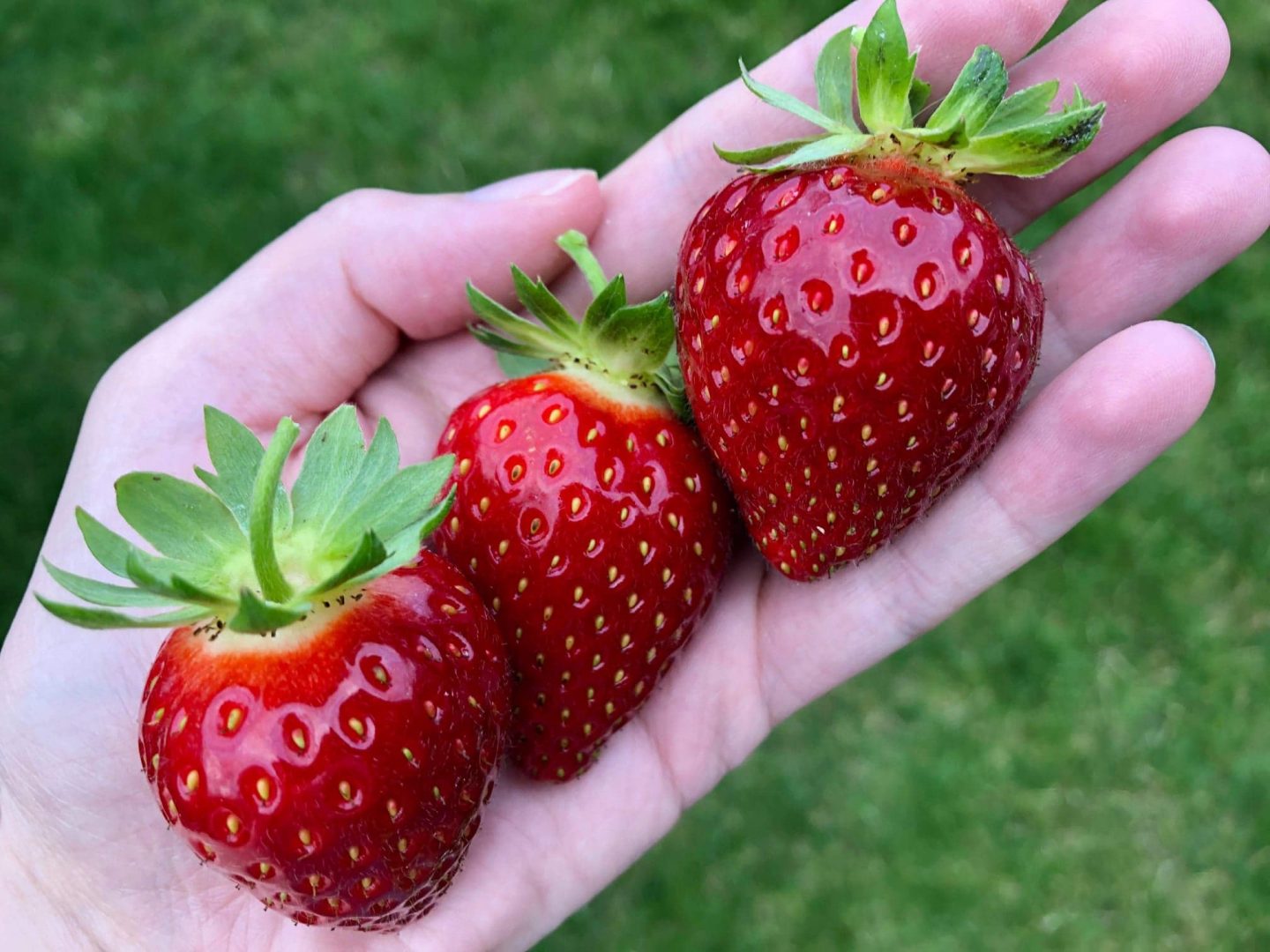 Hopefully the rhubarb, potatoes and carrots will all do well too. One of the best things about growing your own fruit and vegetables is that not only do they taste better, children are more likely to eat them too! Autumn gets so excited when I tell her something else she’s grown is ready to pick and eat.

I’m hoping the same will apply to the herbs we planted last week. She usually rejects anything green saying that she doesn’t like it, even if it’s a food she’s never tried before! 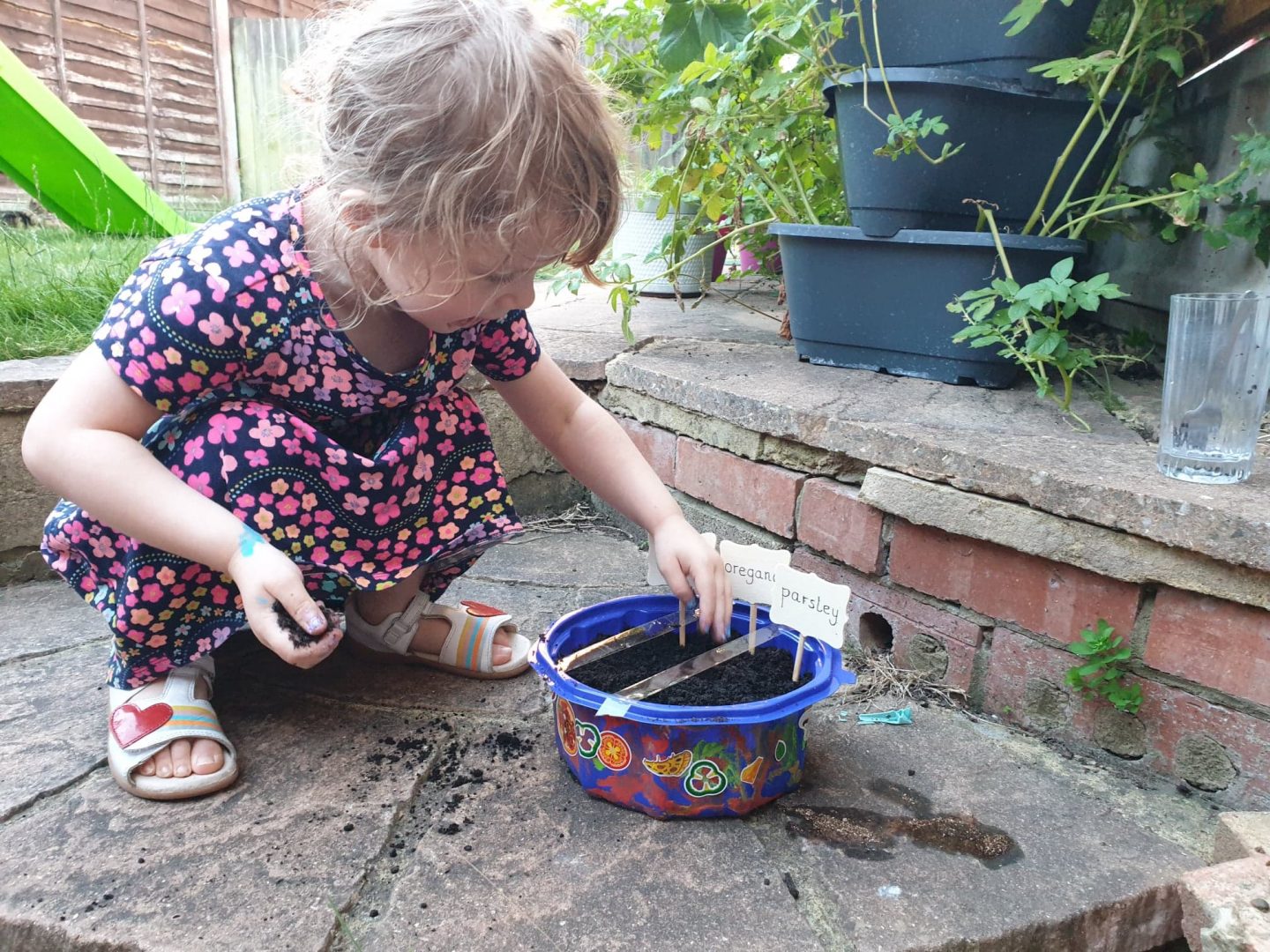 In my last lockdown update post, I mentioned that we were selling our house. Well, we managed to sell it! We also managed to find a house within our budget with an additional bedroom for our upcoming arrival. It needs quite a bit of decorating work, but I’m pretty excited to be starting from a blank canvas again. Hopefully all will go smoothly and we can move at the end of next month or beginning of October. This should give us enough time to settle in before the baby arrives.

Since we bought our house 8 years ago, we have accumulated a lot of junk. We don’t want the pressure of sorting it all out at the last moment. As such, we’ve been sorting through the loft over the last few weeks. It has been quite fun most of the time. There has been a lot of reminiscing over Autumn being a baby whilst looking at her tiny clothes and delight over finding various childhood toys and memories of ours.

We had 3 celebrations over the last few weeks, the first of which was Father’s Day. It felt a bit odd having to keep a distance, but we still saw both our Dads thanks to relaxed lockdown rules. We even had a delicious barbecue.

Our 5th wedding anniversary we weren’t quite sure how to celebrate. In the end, we decided to go for a picnic on a hill in the middle of nowhere. We only saw one other person all afternoon and had a lovely time. Thankfully my energy levels weren’t too bad that day and I was able to eat during the day without nausea. Autumn had a great time running around, although she was annoyed that I kept shouting to her to avoid cow pats! 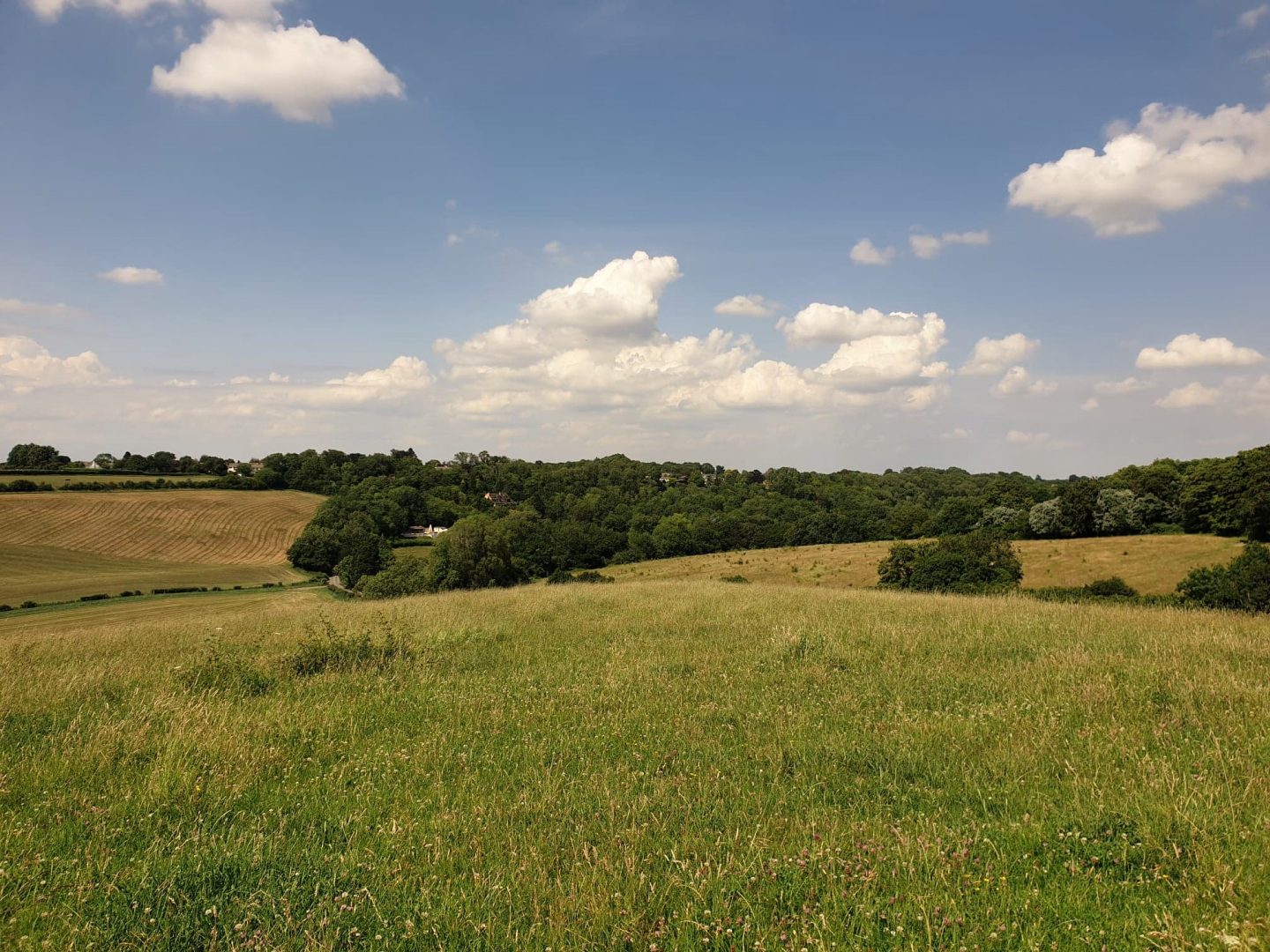 We also celebrated my Nan’s 80th birthday last month. That was probably the most challenging celebration of all. We would usually go out for a meal or something, but of course that wasn’t possible with rules at that time. We gave it our best efforts though and she had a lovely day! 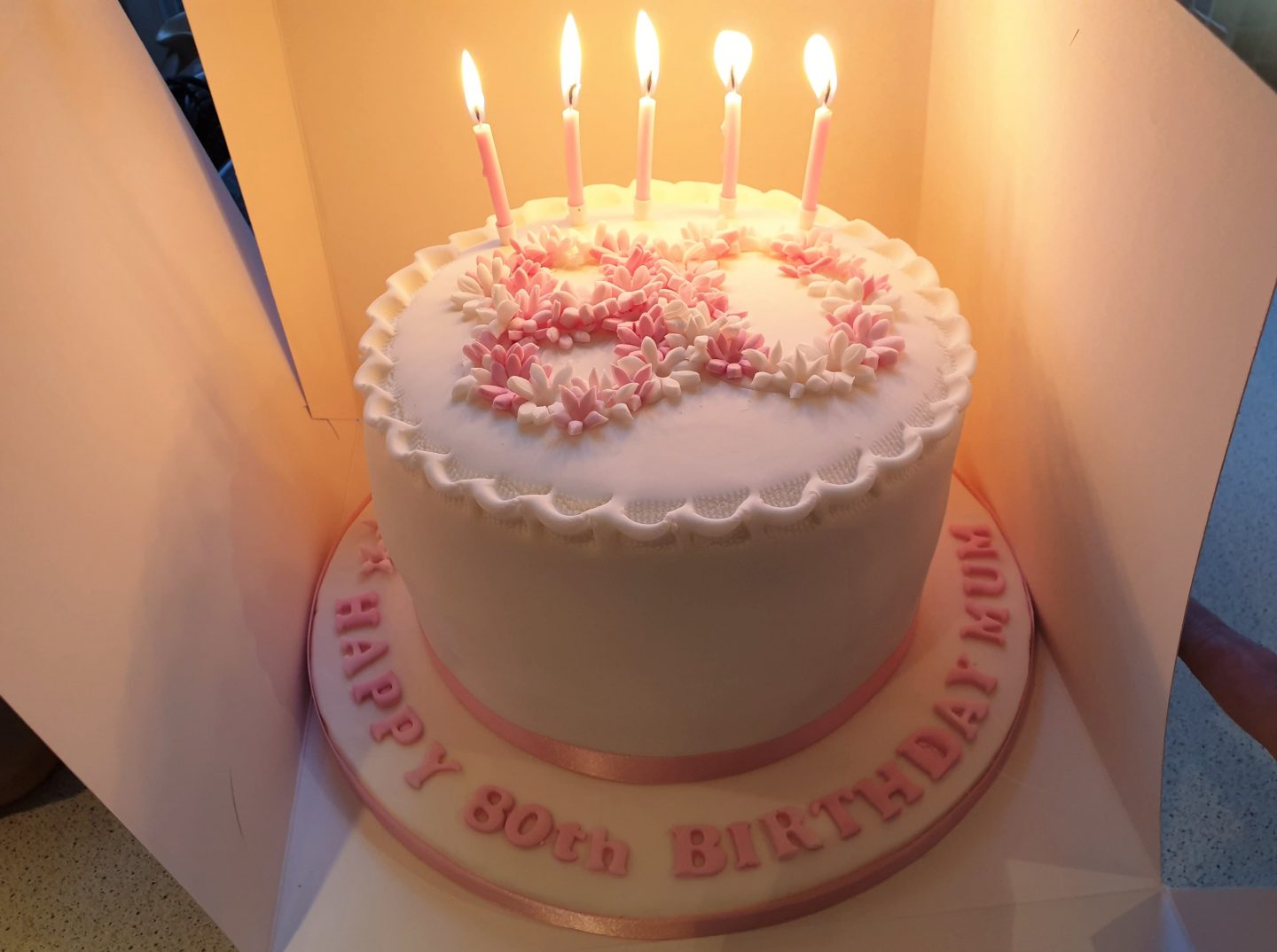 We’ve been going out for walks more than we would have pre-lockdown. In fact, we even went out on a really rainy day the week before last, which is out of character for us unless we’re on holiday in Wales! 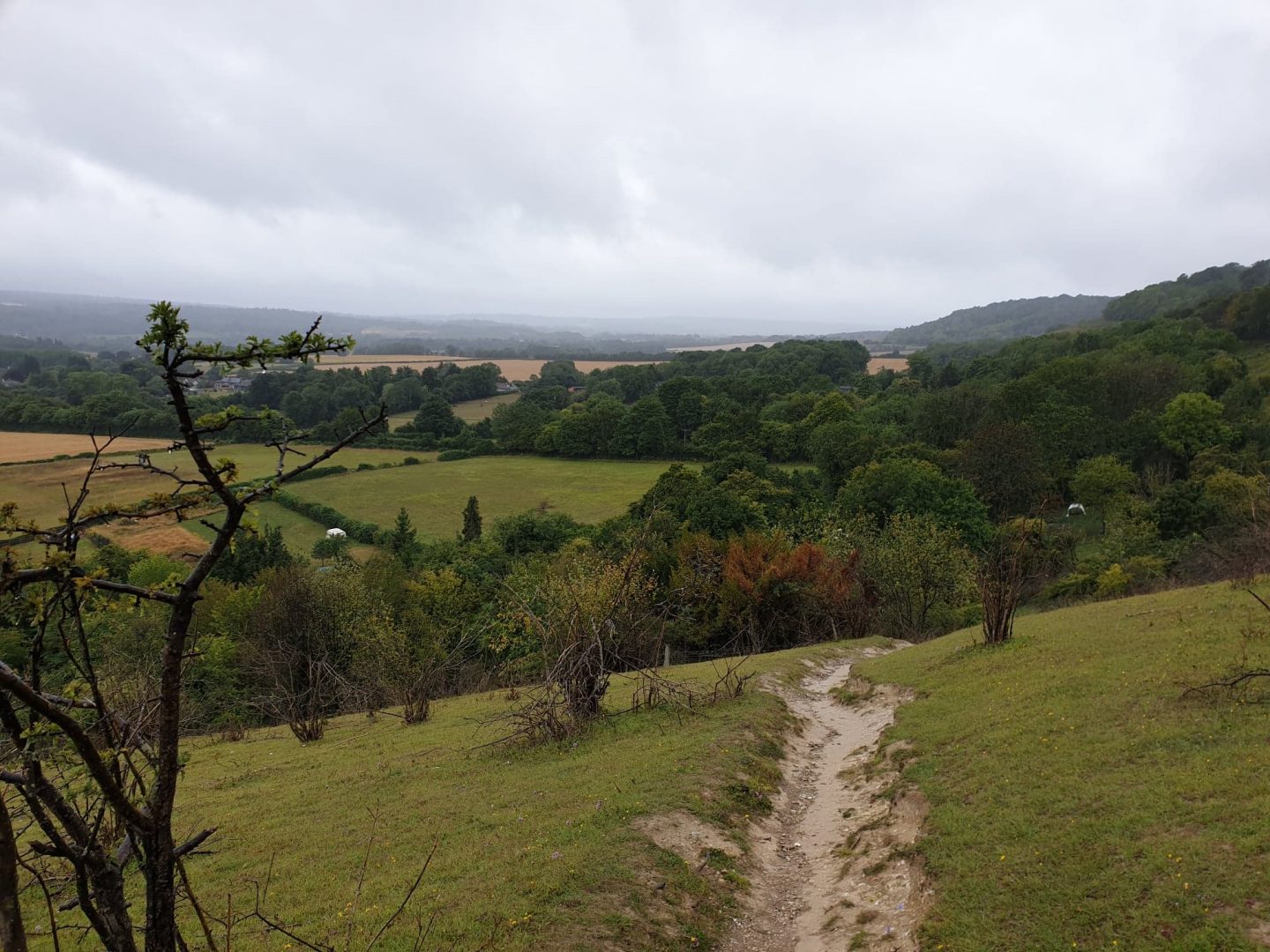 We’ve explored woodland we haven’t for years and had lovely evening walks on the marshes. 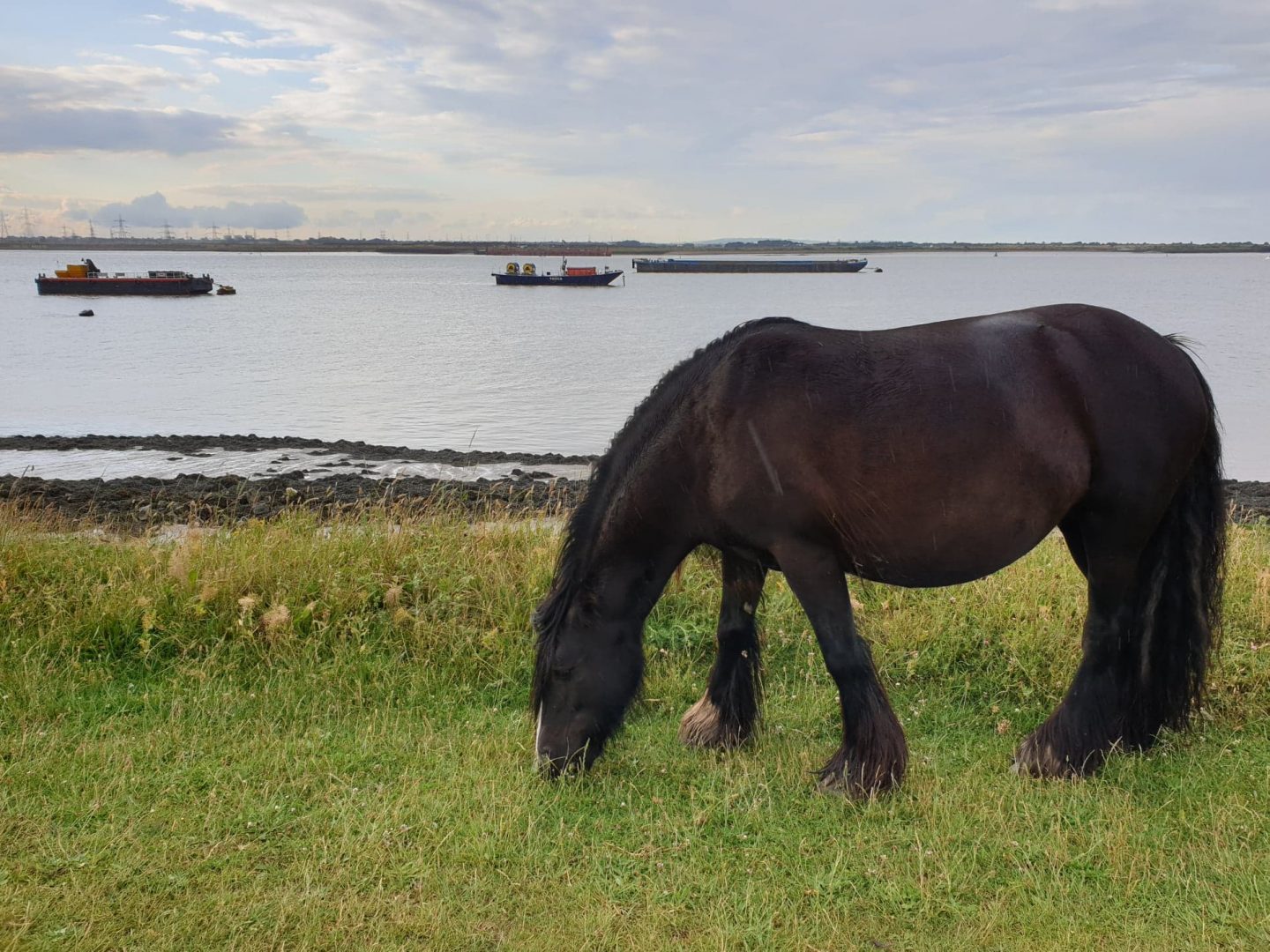 Due to me being high risk, we’re still being cautious about going to shops and other places that have reopened. I think as a result of this, we’ve been extra appreciative of these walks as they’re something we feel like we can do safely.

Over the last few weeks, I’ve seen my friends again which has been amazing! It’s always been outside on a sunny day whilst maintaining a distance, but it has just felt so lovely to finally see them after so many months. At the weekend, Autumn got to see one of her friends and play on their scooters. It was the first time she’s got to play with a child since her last day before nursery shut in March. She was so happy and it was wonderful to see such a big smile on her face.

I’ve really been worried about the impact not being able to play with other children has been having on her health and development. I really hope things continue well enough for schools to reopen in September as it would do her a world of good to go back to nursery. 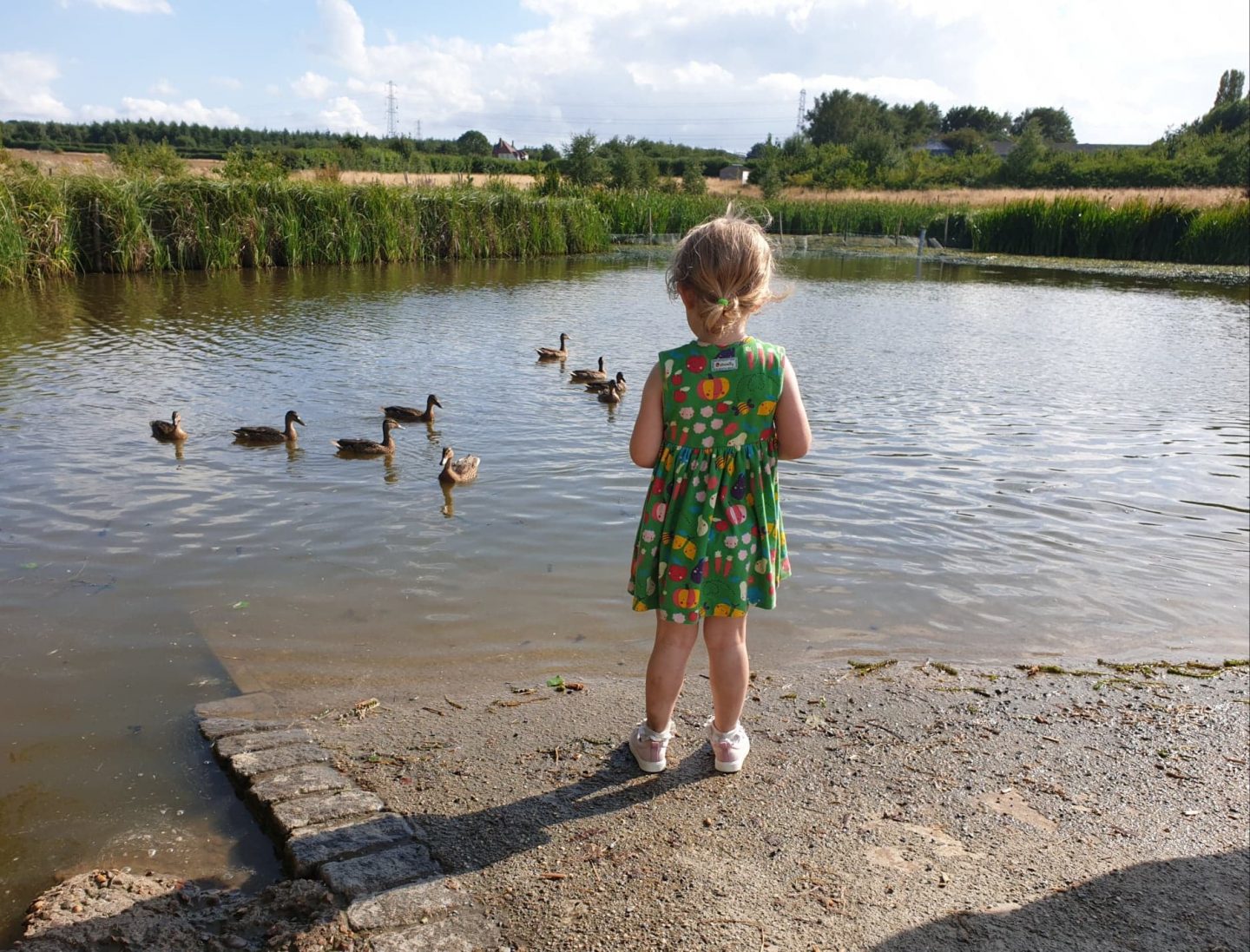 In the first few weeks of lockdown, I was so busy with getting my head around homeschooling Autumn and doing jobs around the house I’d been putting off for years. In the weeks that followed when I found out I was pregnant at the beginning of May, all I really did was  sleep and lollop around feeling sick. As such, I hadn’t got to start trying out any new hobbies like I’d planned to do. As I’ve improved in the last few weeks, I’ve finally been able to get to these!

I want Autumn to have a memory scrapbook of this time, so I’ve started work on that. I wish I’d been able to do it more as things were happening, rather than creating it mostly retrospectively. However, making it now is better than nothing at all and hopefully it’ll help me to organise it better anyway! 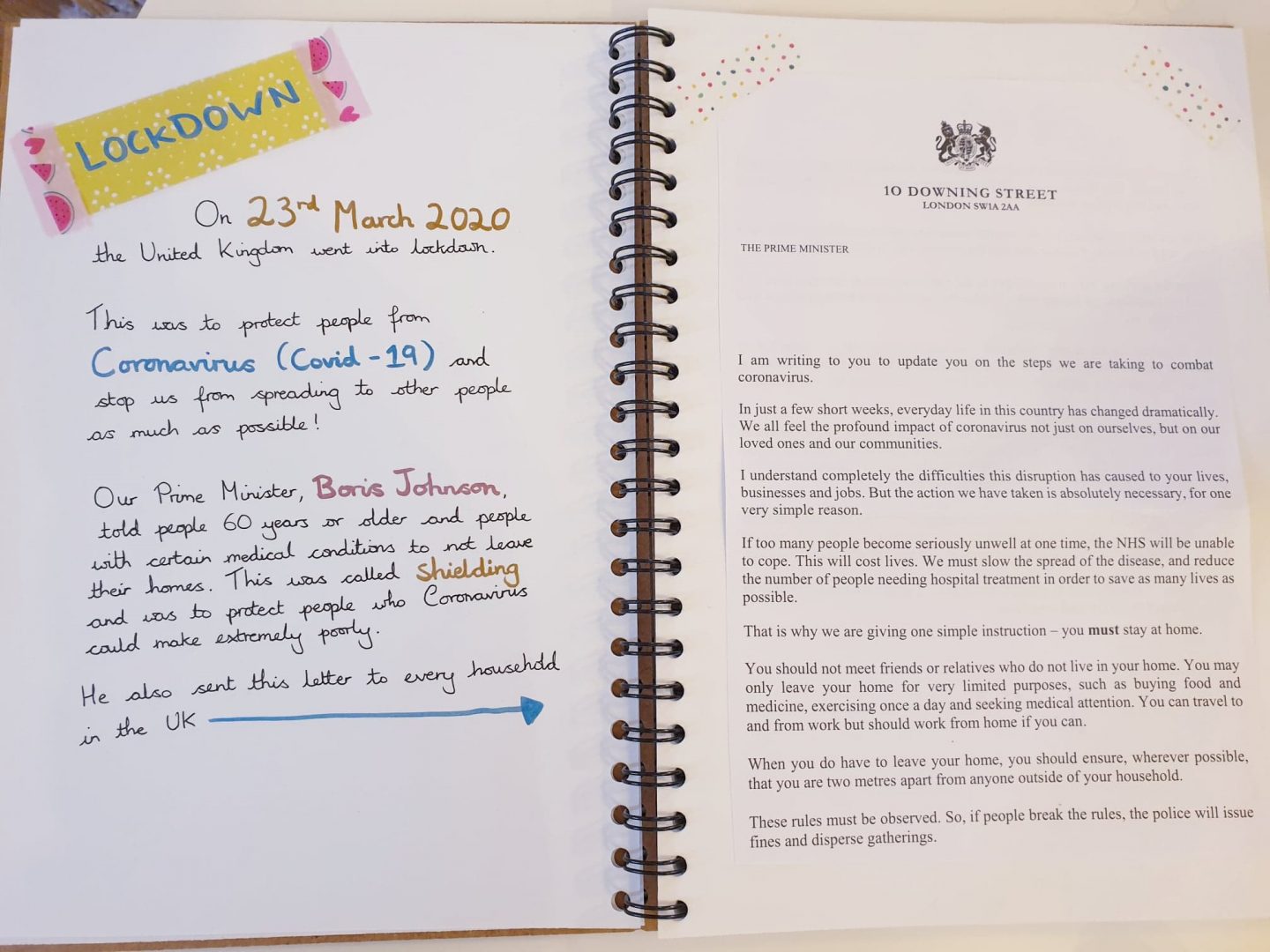 I’ve wanted to learn crochet for a very long time. Right near the beginning of lockdown, I decided that finally learning could be a project to keep me occupied. I ordered some wool and a crochet hook…but I’m disappointed to say that I’ve only actually sat there and done it for two evenings! I’m just not sure if I have the patience at the moment with my baby brain, but I’d like to try and get back into it again. Although frustrating at points, it was enjoyable seeing myself making progress. 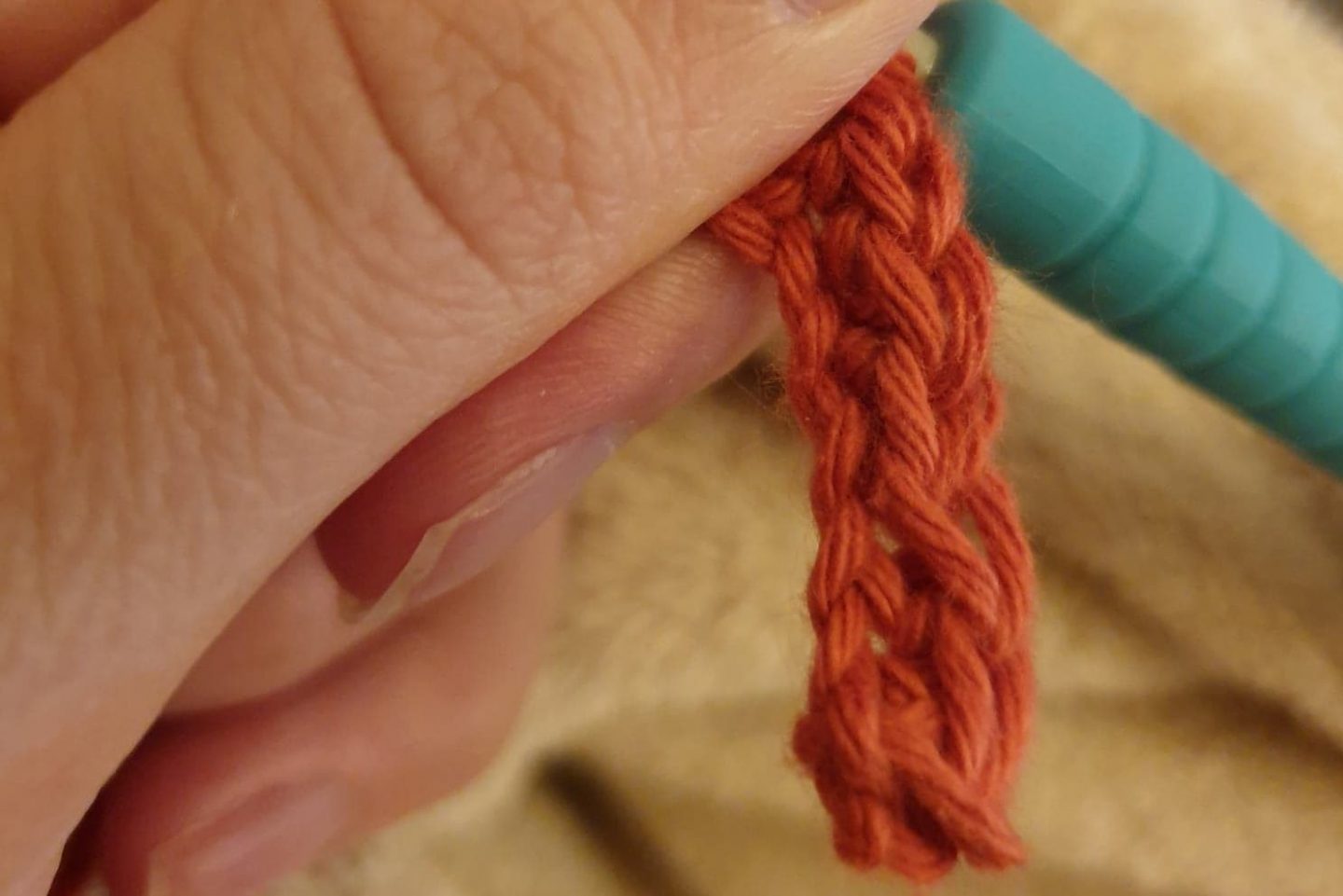 Last, but definitely not least, we finally announced my pregnancy in the last fortnight! I was cautious about announcing what I felt was ‘too early’ in my mind after my miscarriage in December. It was becoming harder and harder to keep under wraps, though. We had a socially distanced photoshoot to celebrate our little rainbow baby who all being well will be arriving in early January.

What have you been up to the last few weeks? Has your life almost returned to normal? I’d love to hear from you in the comments!