When I found out I was pregnant

I’ve really enjoyed my When I found out I was pregnant guest series over the last few weeks. We’ve had such a variety of stories! I’ve been asked whether I’m going to share my story, so I thought I would!

I hope you enjoy reading my story and please do check out some of the ladies’ stories too!

Dave and I were working from home, as we were having our bathroom redone and needed to be at home to make decisions and supervise what was going on. It’s fortunate really that we have a nice boss and the nature of our work allows us to work from home.

We had thought about having a baby for some time, but it was around November that I finally managed to lower my anxiety levels about the idea enough for us to do anything about it. I had beautiful visions of telling our families over Christmas, but when I took a pregnancy test a couple of days before Christmas it was negative. Either it wasn’t meant to be, or my hormones hadn’t normalised enough. “Yes!” I shouted, punching the air. Dave looked really upset. “Sorry”, I apologised. “I thought you wanted a baby too…” he said. “Well, I do, but I’m also worried about it. I’m celebrating another month that I’m not going to feel sick and anxious about pregnancy and labour!” I replied. He was still visibly hurt by my response, despite my apology.

As December continued, I felt sad about the fact that the result had been negative. In the first week of January, it was Dave’s Grandad’s birthday. I baked a cake for him, but I really didn’t feel good. I felt lethargic and felt quite sick. I tried not to smell the ingredients I was using; the vanilla pods made me feel especially unsettled. I didn’t go out for lunch with family and stayed at home instead, finishing the cake and napping. I felt a little brighter by the mid-afternoon and went down to spend some time with everyone and surprise Dave’s Grandad with the cake, which he loved! 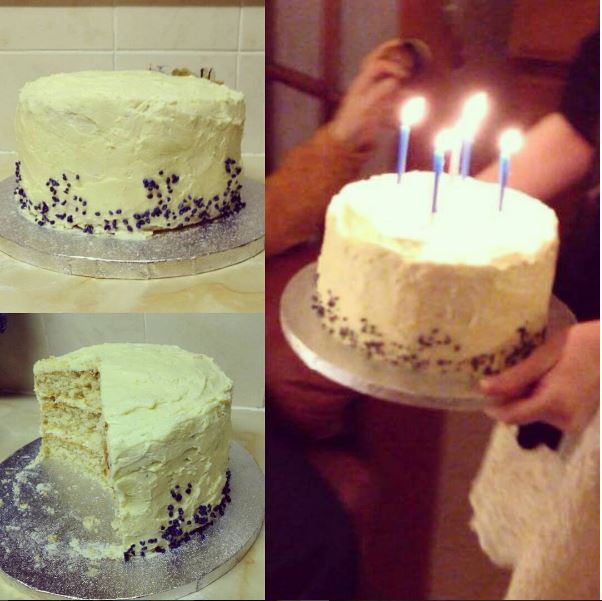 I didn’t really think anything of it at the time, but I think that was a very early sign of pregnancy! A couple of days later at work, I was talking to a colleague. Although I was sitting down I suddenly felt very dizzy and like I was going to faint for about half a minute. The following week, my boss was over from Canada and I had lots of training and meetings. I kept having to excuse myself to pee; the amount of toilet trips I needed to make was ridiculous! As well as that, I was also incredibly tired. I struggled to wake up and get ready for work. I was extremely tired by the end of the work day and wanted to sleep by the time I got home.

At the end of December, I’d bought some beautiful new bras from Boux Avenue in the sales. However, now my usual C cup bras didn’t fit me and I’d gone up to an E cup in a matter of weeks. My boobs also really hurt, if anything even gently knocked into them they were so painful. “Maybe I am pregnant”, I said to my husband one evening as I got undressed, wincing as they were so delicate.

However, my hopes of being pregnant were dashed that Friday when I was sitting in a meeting at work. I started having achey legs and hips and lower abdominal cramps. These were all signs that my period was starting. Okay, it was a day early, but I thought perhaps my hormones hadn’t settled down yet and my cycles were likely to be a little unpredictable.

The next day, Saturday, I thought I’d take a pregnancy test on the off-chance. I didn’t think I was pregnant. I took a test and it was negative. This time I was disappointed too and cuddled Dave. However, by mid-week, my period still hadn’t arrived.

On Thursday morning, I woke up and used the pregnancy test that Dave had put in the bathroom the night before for me. The bathroom was a wreck where it was being decorated. We literally only had the base of the toilet, no seat or cistern at the back. It had to be flushed manually, using a bowl of water! It was quite difficult, having just woken up, trying to balance there and use a test stick. However, I managed it.

I put the test on the floorboards in front of the toilet and once I’d washed my hands, I sat cross legged in front of it and waited. I’d told Dave to wait in our room in case I responded to it in an insensitive way again! Before long, the word “Pregnant” flashed up, but had a sand timer underneath it. I couldn’t believe it. I felt overwhelmed. I felt sick, terrified, in love and excited all at the same time. It seemed like the sand timer was there for an age. How long was it going to take to show me how far along I was?! I went back into our room with a neutral expression, asking Dave where the instructions were for the test. I got them and saw that it wouldn’t be much longer until I found out. I went back into the bathroom.

After a short amount of time, ‘2-3’ flashed up. I was 2-3 weeks pregnant and had a little life forming inside me. It was smaller than a sesame seed!

I’d wanted to do something cute to tell Dave, but I was such a mix of emotions that I couldn’t wait to tell him. I went in and said “Guess what? You’re going to be a Daddy!”, revealing the test to him. He looked like he was going to cry. We cuddled for a short while before we had to get up. I paced the room anxiously, not knowing quite what to do with myself. Most of the initial excitement had worn off and my anxiety was kicking in. I was going to have to face my fears of sickness and birth! I could take the route of abortion…but no sooner had it thought crossed my mind, it was out again. I honestly feel so bad for even thinking that for a moment, but it was just the anxiety talking. I loved this little baby more than anything already and I would do anything to grow it healthily. I wanted to meet it and over the course of my pregnancy I got more and more excited to meet him/her. When it came to birth, I actually handled it pretty well too! Ironically, I needn’t have worried. Autumn falling seriously ill and my severe anxiety shortly afterwards was far worse than the pregnancy and birth!

What are your memories of when you found out you were pregnant? Let me know in the comments, I’d love to hear from you!

When I found out I was pregnant – Tattooed Mummy

20 responses to “When I found out I was pregnant”