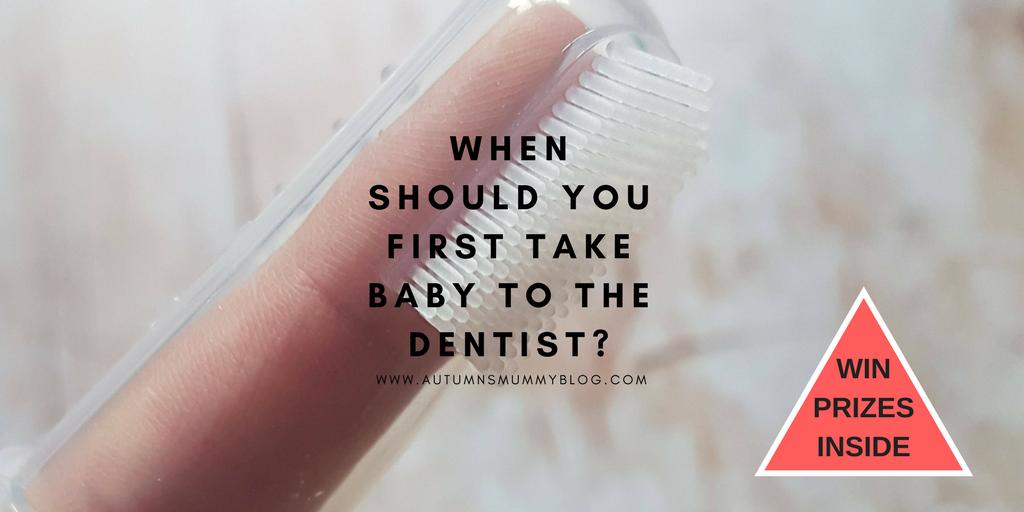 So, when should you take your child to the dentist for the first time? There seems to be a lot of misinformation around about when you should take your baby for their first check up. Shortly before Autumn turned 6 months old, I went to a class at one of our local Children’s Centres. As well as learning about weaning, we learnt about dental care too. It turns out that where I’m based in Medway there’s a scheme where babies are given a Medway Smiles passport. It’s encouraged that they first go to the dentist between 6 and 8 months old.

Here’s some more information how to look after your baby’s precious teeth as well as a giveaway! The prizes you’re in with a chance to win will help you to protect those pearly whites.

However, when I got to the dentists, they seemed to not know quite what to do with her. At 7 months old, she didn’t have any teeth. Typically, her first one came through about a week after our appointment! However, in the class I’d gone to, we were told it was important to have a dental check. We were told we needed to even if they DIDN’T have any teeth! They can still check gum health, which is incredibly important.

We probably spent about 2 minutes in the dentist’s room where the dentist had a little bit of a feel of Autumn’s gums. Then she acted like we were being a little over zealous, telling us that she would get teeth in the next few months (well, yes, I’d expect them! You don’t need to have a dental qualification to tell me that!)

I felt a little downbeat, but knew I’d done the right thing. After all, it was what was recommended! It seems as though a lot of parents don’t really know when they should take their children to the dentist for the first time though. I’ve heard people told that they don’t need to take their baby until they’ve got a tooth or several teeth. Believe it or not, someone told me that they were told their child didn’t need a dental check up until they had ALL their teeth. Yet another couple of people have told me they were told between the ages of 2 and 3!

Something needs to change! Many dentists don’t seem to know why babies are being brought to them or what to do. There’s also a lot of confusion for parents. More information is needed and that’s what I’m aiming to do in this post!

Following a recent conference, the #DCby1 DENTAL CHECK BY ONE campaign was launched. The British Society of Paediatric Dentistry’s 65th Annual Scientific Conference was held in Manchester from 19th-22nd September. It aims to educate parents on how important dental checks by the age of one are to children’s long term oral health.

The role that Health Visitors can play in that was also identified. It would seem that not all Health Visitors around the country are as aware of the necessity of early dental checks as the ones in Medway are.

There are scarily high levels of tooth decay in children, which is completely unnecessary. More education is needed so that parents know what they can do to keep their children’s teeth and mouths in good health, preventing unnecessary fillings and potentially orthodontic work in later life. 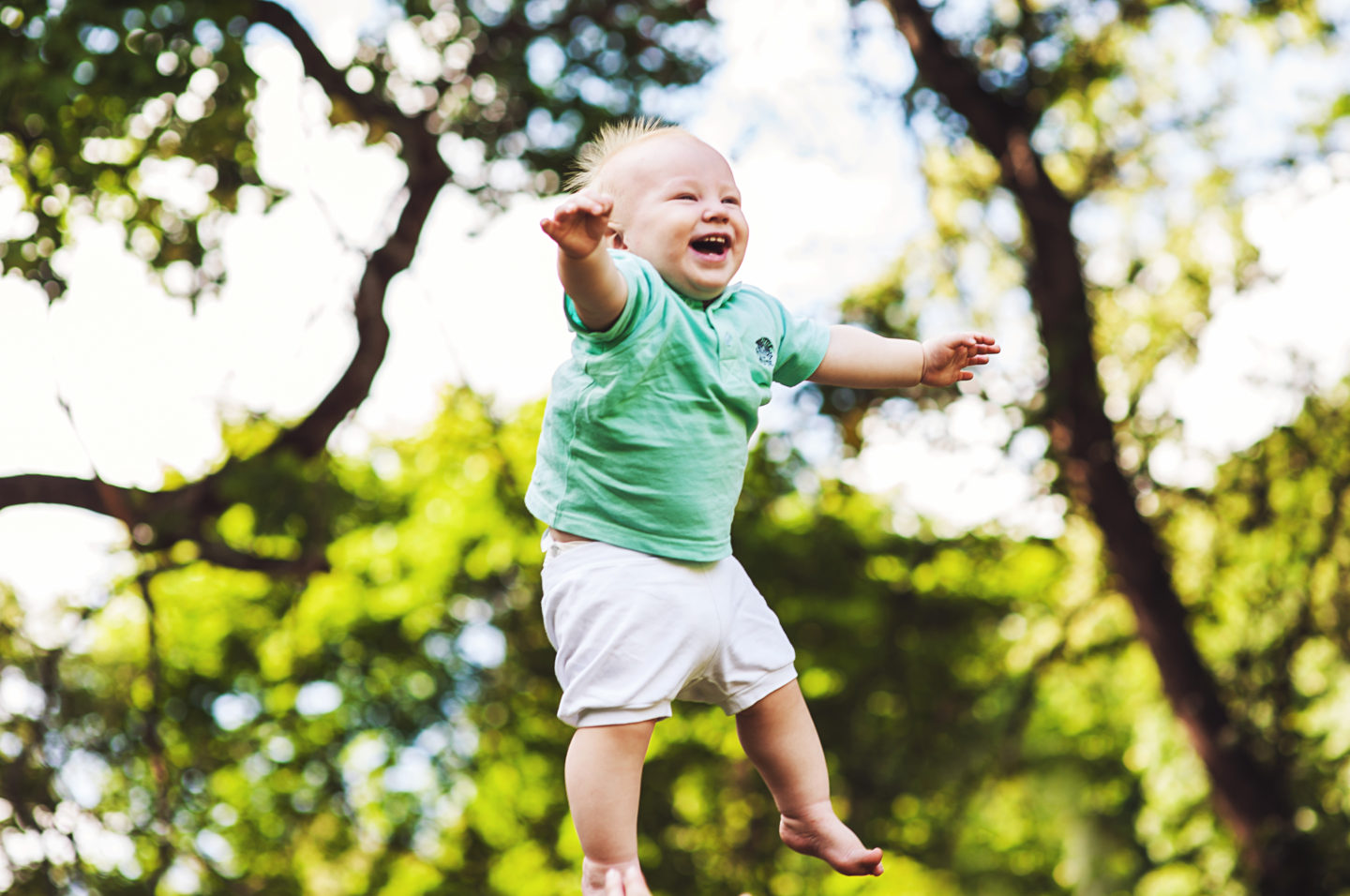 You may have heard of Bickiepegs – they’ve been around a long time! My mum used to give me their teething biscuits when I was a baby. 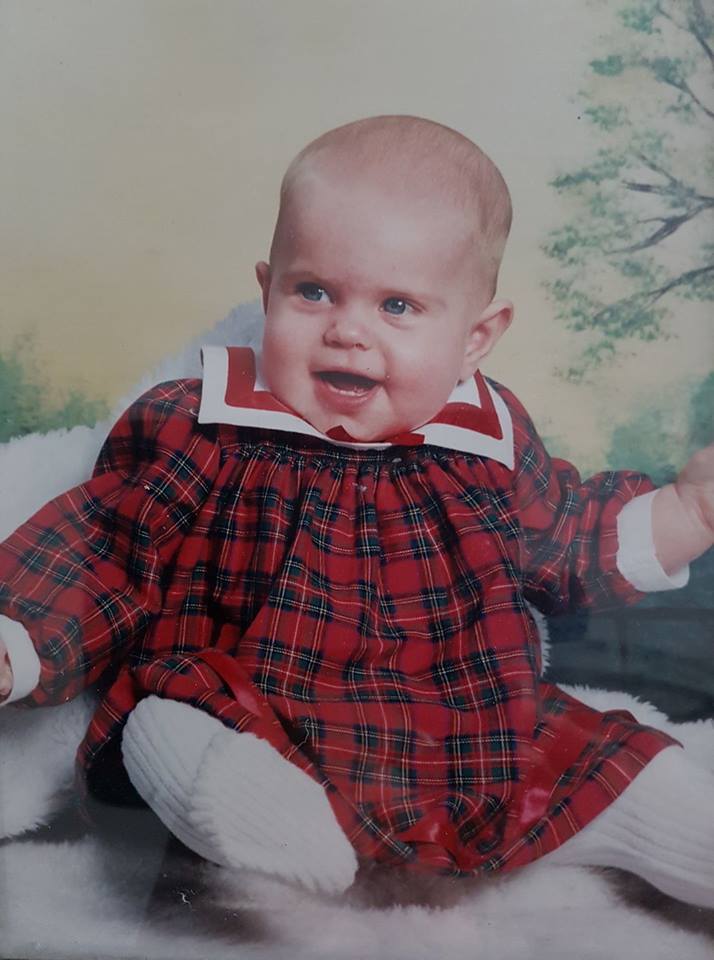 In light of the conference, they have launched an initiative in which Health Visitors will be given a free Bickiepeg Finger Toothbrush & Gum Massager as well as a Doidy Cup.

This toothbrush and gum massager fits nicely on the tip of your finger. It allows you to clean your baby’s first teeth and massage their gums. It’s a much more controlled and less invasive way than using a toothbrush. Just as with adults, it’s important that teeth are cleaned morning and night. It is important to clean teeth as soon as they come through. Meanwhile, making sure your baby’s gums are clean makes sure that their mouths are in good condition ready for new teeth! 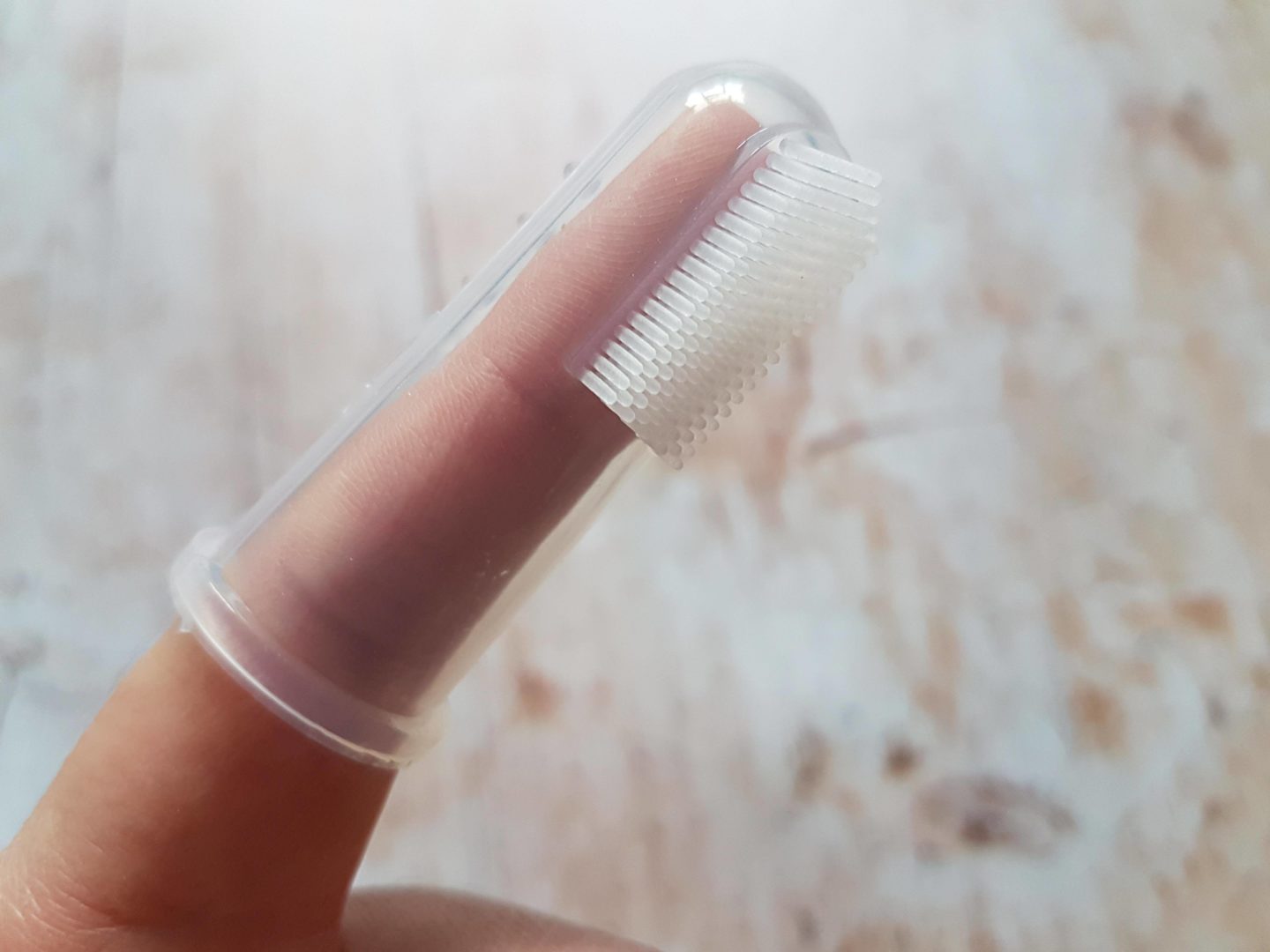 This brush is a good way to introduce babies to brushing in the early days. One side has soft bristles and the other side is slightly dimpled that allows you to give your child’s gums a soothing massage. 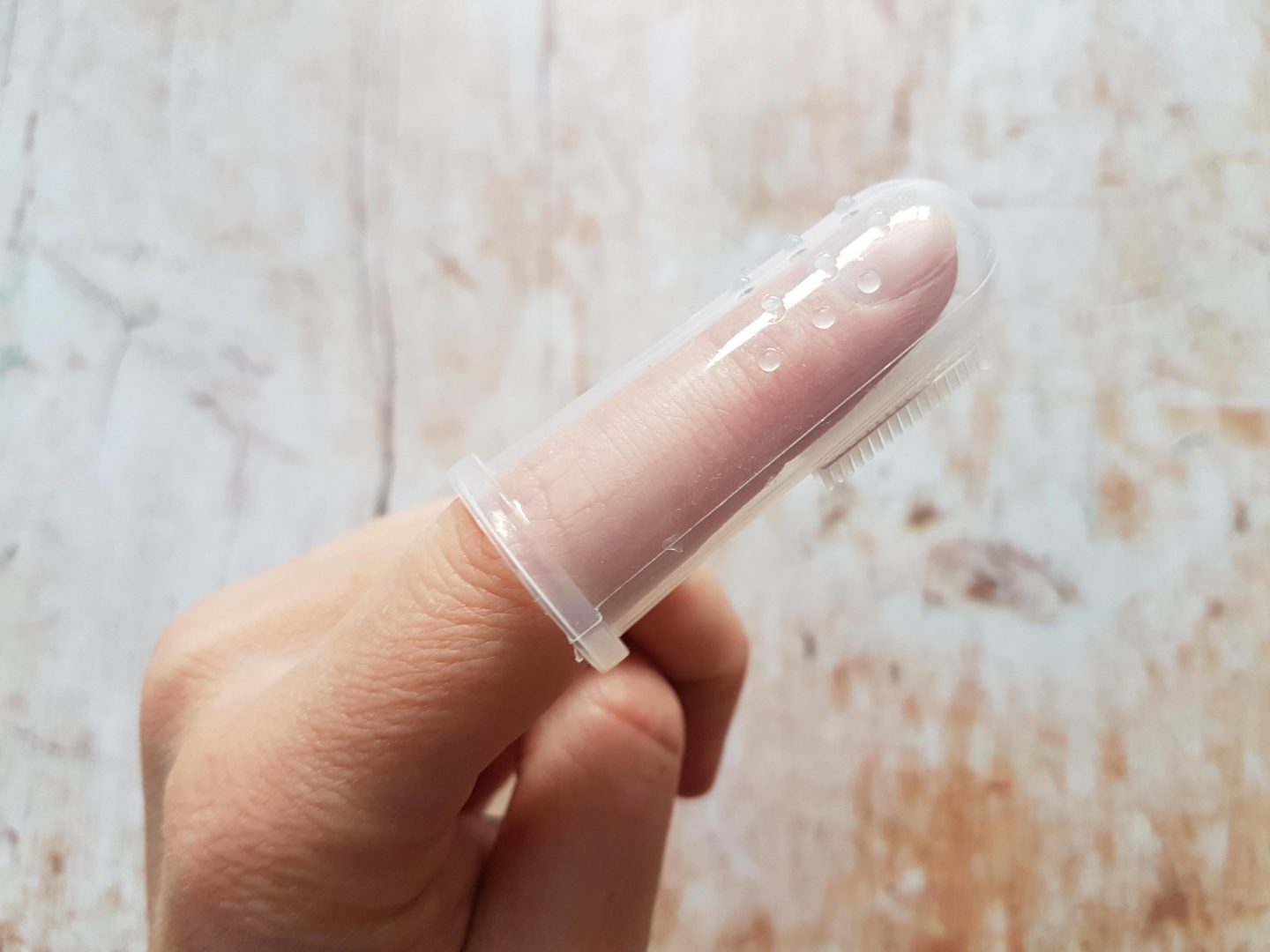 This product is suitable for babies between the age of 6 and 18 months. Autumn is coming up to the latter end of the age bracket and is very independently minded, so she keeps trying to do it herself if I use this to brush her teeth! However, I had something similar when she was 6 months and it worked very well for us when she was younger. I think it just depends on your child’s nature, as I expect many people will be able to use it up to 18 months.

You may have seen news stories about how beakers with spouts or teated bottles can damage teeth. This unique slanted cup helps to teach your child how to drink from the edge of an open cup. This has been shown to help prevent premature tooth decay, poor deefing techniques and delayed speech development. It helps to encourage good oral movements and helps to develop chewing skills through the use of the jaw, tongue and mouth muscles. They are suitable for both breastfed and bottle fed babies. 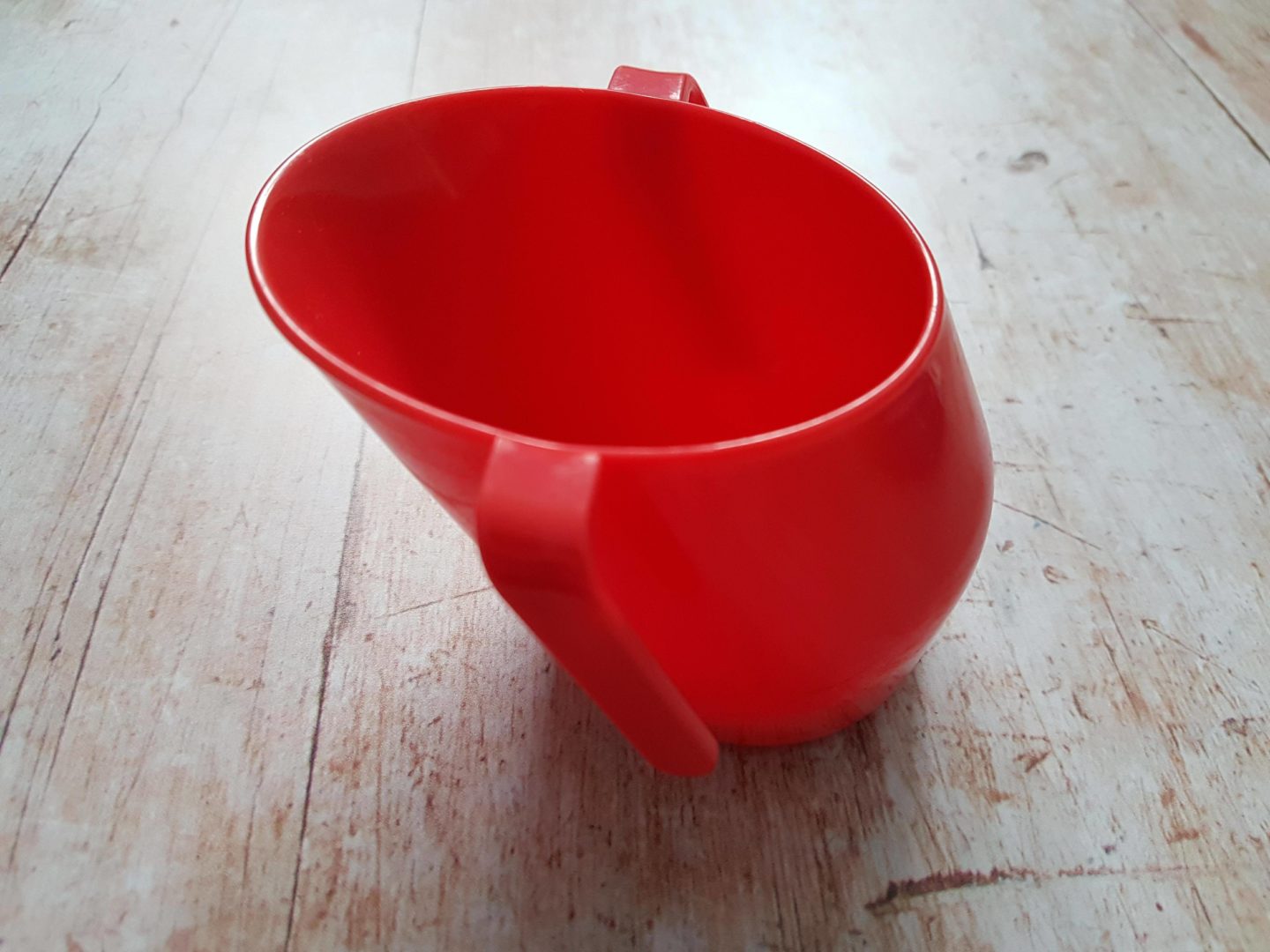 It takes a little getting used to, perhaps especially if your baby has been used to spouts or teats. However, when I hold it for Autumn, she seems to get on with it very well. She just needs to learn to watch the level of the water in her cup as she tilts it when she holds it independently. Currently, I’m not sure she does that, as she tends to drench herself! I think she is getting better though – practice makes perfect! By October, Bickiepegs had already reached out to 2500 Health Visitors, so you may be offered these products soon if you haven’t already! I also have 5 sets for you to win, as well as Bickiepegs natural teething biscuits!

Disclosure: This post was written in collaboration with Bickiepegs. I received a finger toothbrush & gum massager and doidy cup for the purpose of writing this article.

42 thoughts on “When should you first take baby to the dentist? (+WIN)”