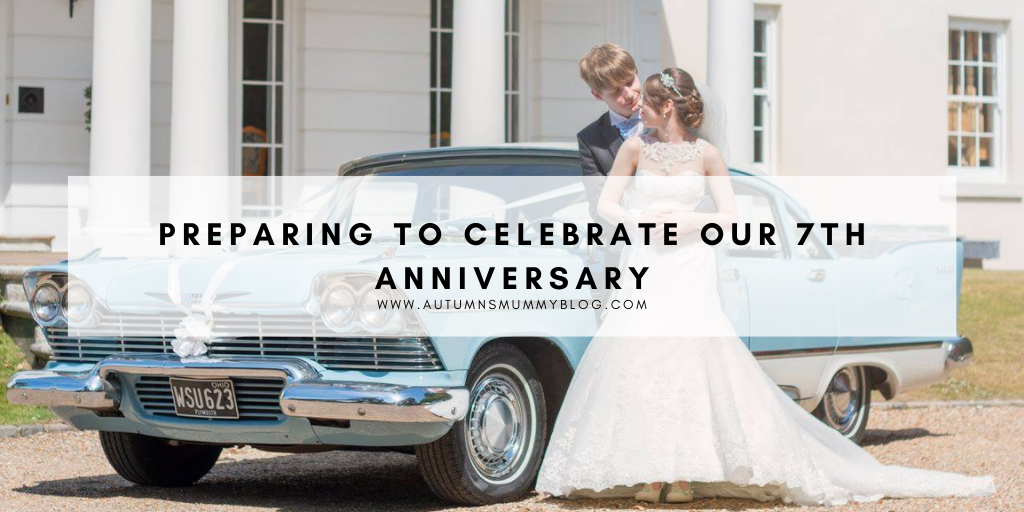 Collaborative Post¦ Unbelievably, this June will mark 14 years since my husband and I met. We’ve been inseparable ever since! In 2015, we finally tied the knot. It’s fortunate really, as I was close to running out of fiancé and boyfriend anniversary card options in the shops (if only Boomf was around then). Now, I’m thinking about how we’ve celebrated in previous years as we head into our 7th year of marriage.

Initially, we celebrated our ‘monthiversary’ on the 12th of each month. It’s slightly sad but sweet looking back on it. I was surprised the first month when Dave met me at school with an anniversary card. However, each month after I bought him a boyfriend anniversary card. We’d also buy each other a token gift.

We spent our first wedding anniversary on holiday in Wales where we’d spent our honeymoon! We had a wonderful day, walking by the sea in Solva. Like most of our anniversaries, we also celebrated with delicious food.

I don’t remember how we celebrated our 2nd wedding anniversary. We had a 9 month old and it was a Monday, so that would have made it tricky to do much!

Our third anniversary was spent on my favourite holiday so far in Wales! It was hot and the sun was shining and we took Autumn for a walk in Solva where we’d been on our first anniversary. We ended the day with campfire songs and food.

I worked on the morning of our fourth anniversary and then went shopping for my husband’s presents. Very last minute, oops! After sharing our gifts, he served up a vegetarian shepherd’s pie that he’d cooked. It’s my favourite meal but it takes so long that I only get it on special occasions!

Fortunately, Covid-19 rules were lessened in time for us to celebrate our 5th anniversary! It was hot, so we had a picnic in the countryside. I was expecting Reuben by this point and had a little bump. It was a perfect afternoon playing with Autumn – even my morning sickness gave me a break for a few hours!

Unfortunately, I had a migraine on our 6th anniversary. Still, we went for a walk by the river in the evening.

The days of standing in a shop looking for a boyfriend anniversary card are long gone. Yet, I still think it’s nice to celebrate each year and reflect on how far we’ve come. I wonder how we’ll celebrate this year?

1 thought on “Preparing to celebrate our 7th anniversary”