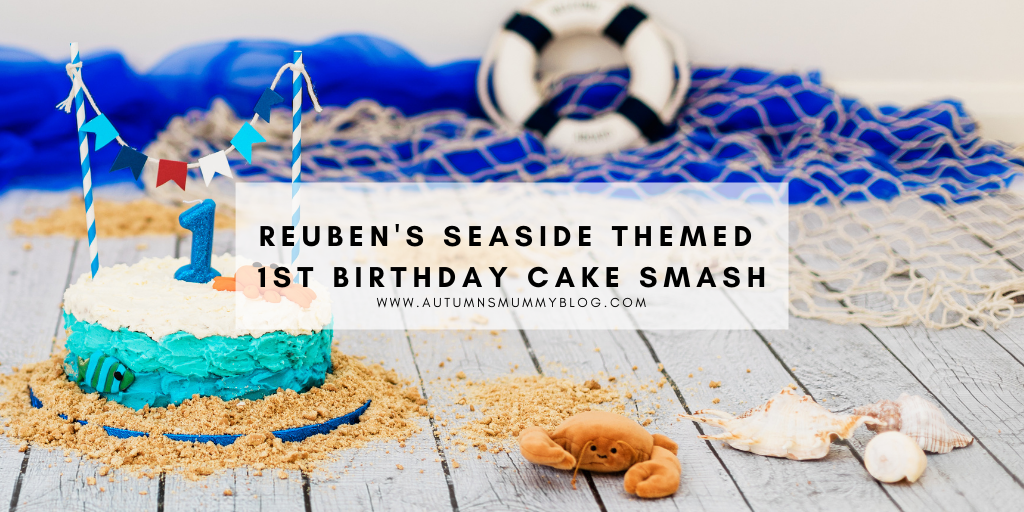 We’re still very much in the midst of renovating our house, but I want to decorate his nursery with a seaside theme. We recently got the photos back and once again Robert Marriott has helped make the ideas I pictured in my head a reality. The photos will look so gorgeous displayed in there!

I started off on Pinterest and Google, searching for inspiration for a seaside themed cake. Of course, I’m not a professional baker. Therefore, it had to be something I felt was achievable for me. I found a cake I liked for inspiration and made a mental note of it.

The morning before the cake smash, I baked a Victoria sponge. Of course, I put lashings of strawberry jam and buttercream inside. Once it had cooled down, I set about decorating it. I made a LOT of buttercream and used blue food colouring to make some darker waves. The application was a little stressful, with me using a couple of different shapes and sizes of pallet knives, trying to get the texture of waves. The next batch of buttercream had a little less blue this time to create a gradient effect. I applied this going up the cake, then continued with just white buttercream above it and on the top of the cake.

I bought some ready to roll icing in different colours for the crab and the fish. Luckily, my local Hobbycraft had some with short dates reduced! I had SO much fun making the little crab. As for the fish, he was actually inspired by one of the fish on my shower curtain!

I made the bunting using some paper straws, string, coloured card and a glue gun. The final touches were a blue ‘1’ candle and lots of digestive biscuits crushed to look like sand! Let me tell you, any stresses and frustrations I’d had baking and decorating the cake were bashed out with the rolling pin. Crushing biscuits is a great form of therapy.

I was pleased with the final result! 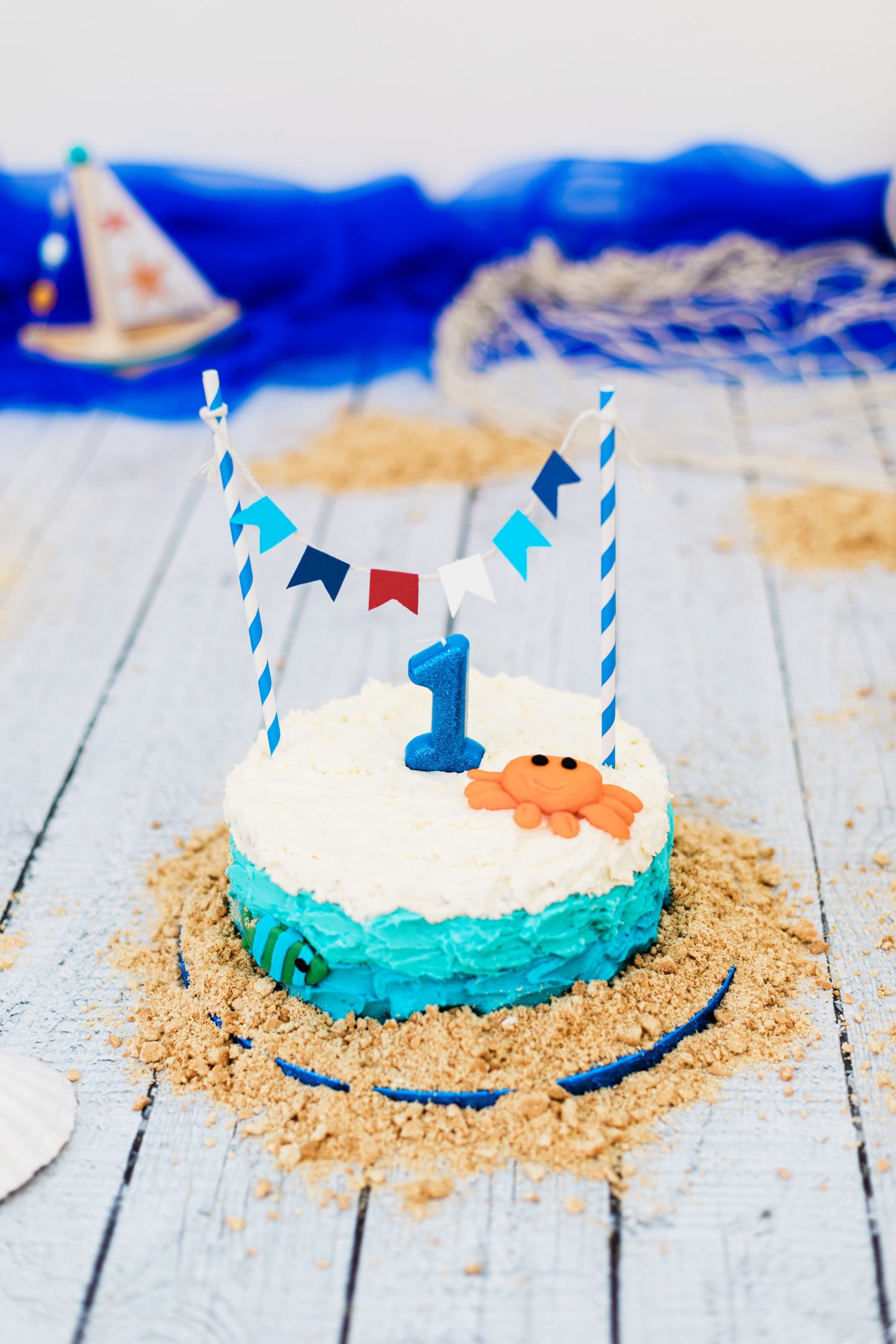 Before we started on the cake photos, we warmed up with some pictures in the boat Reuben got from my parents for his 1st birthday. I was pleased with how the blue scarves I bought mimicked the sea. The plain wall of my in-law’s kitchen was the perfect backdrop.  Unlike us, they don’t have lots of channelled out walls from rewiring! 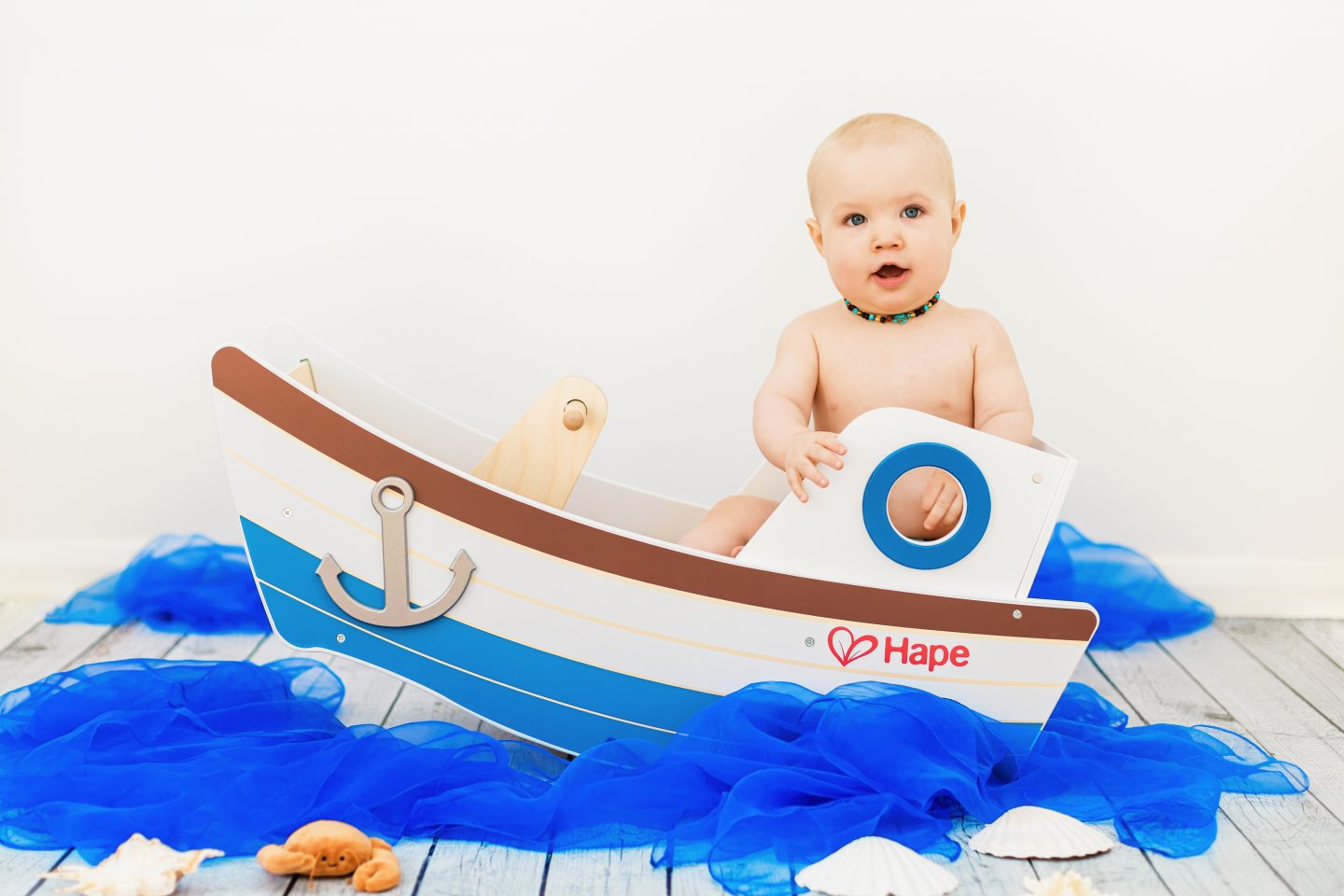 After a few photos in the boat, we moved onto the cake. I was apprehensive about seeing my hours of work literally destroyed, but also obviously very excited! 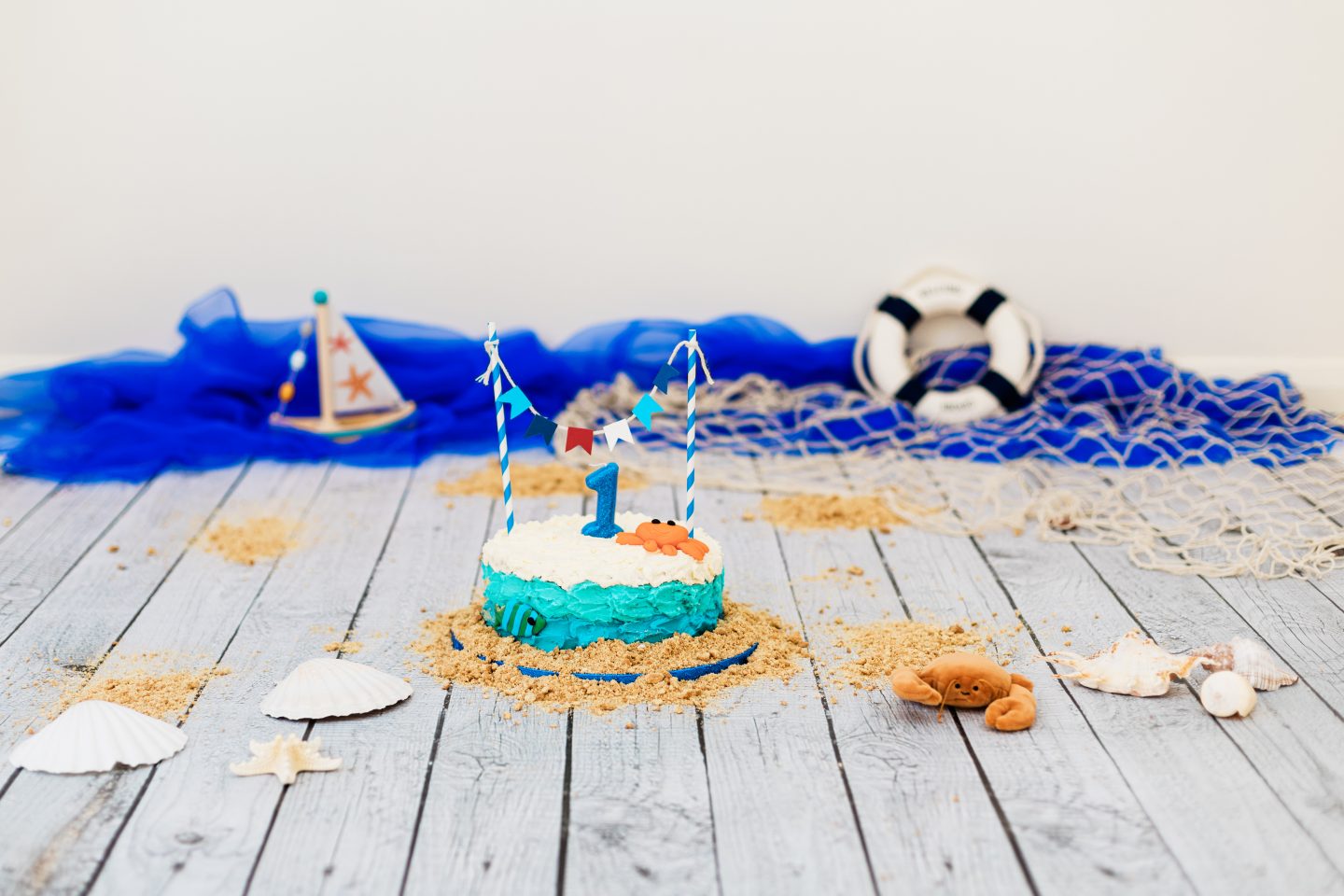 Reuben was very tentative and needed a little bit of encouragement. He didn’t really seem to know what to do. Usually, EVERYTHING goes into mouth. Yet bizarrely, he was just examining the cake on his fingers, not even attempting to eat any of the icing! 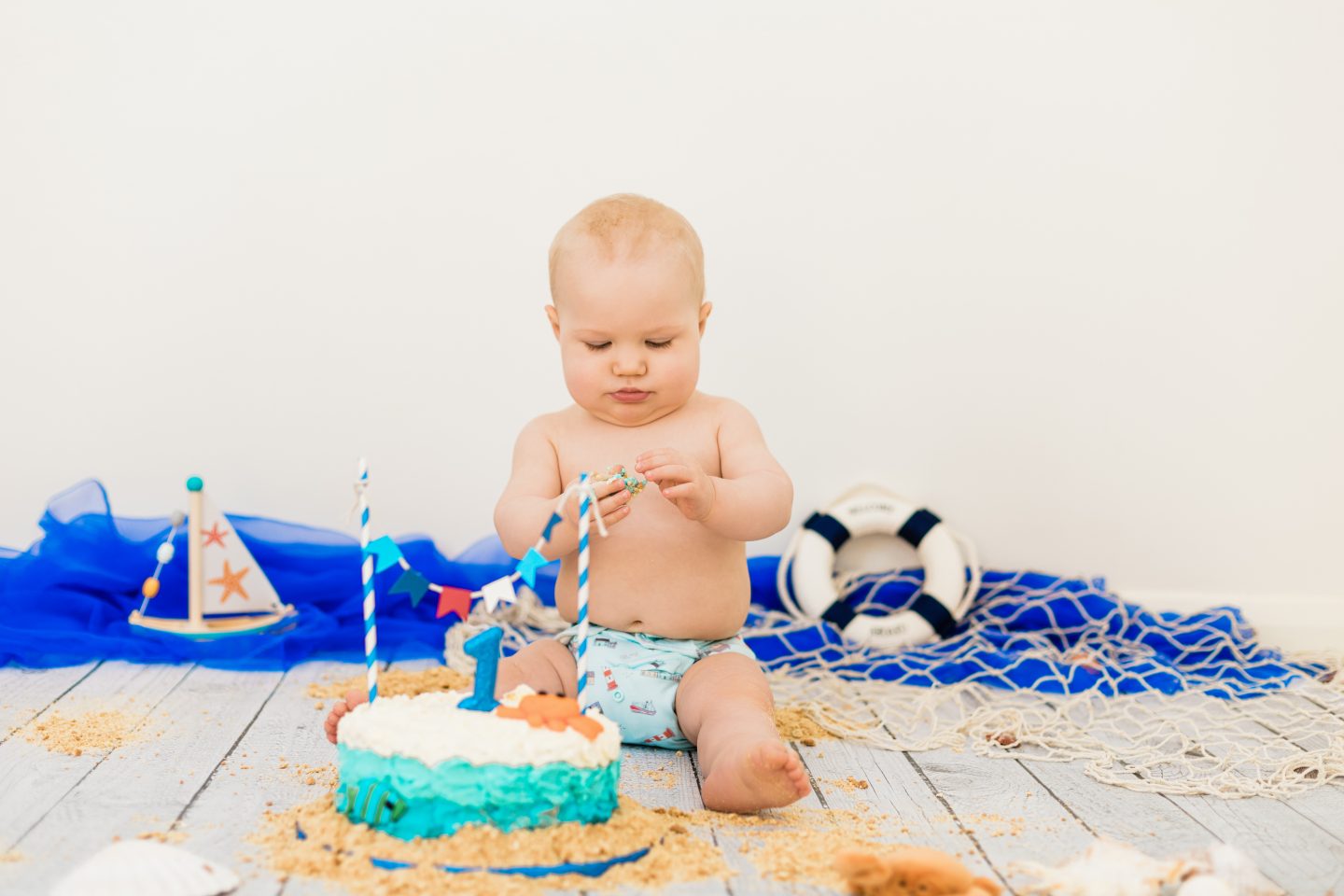 In fact, he seemed far more interested in the decorations on the cake than the cake itself! 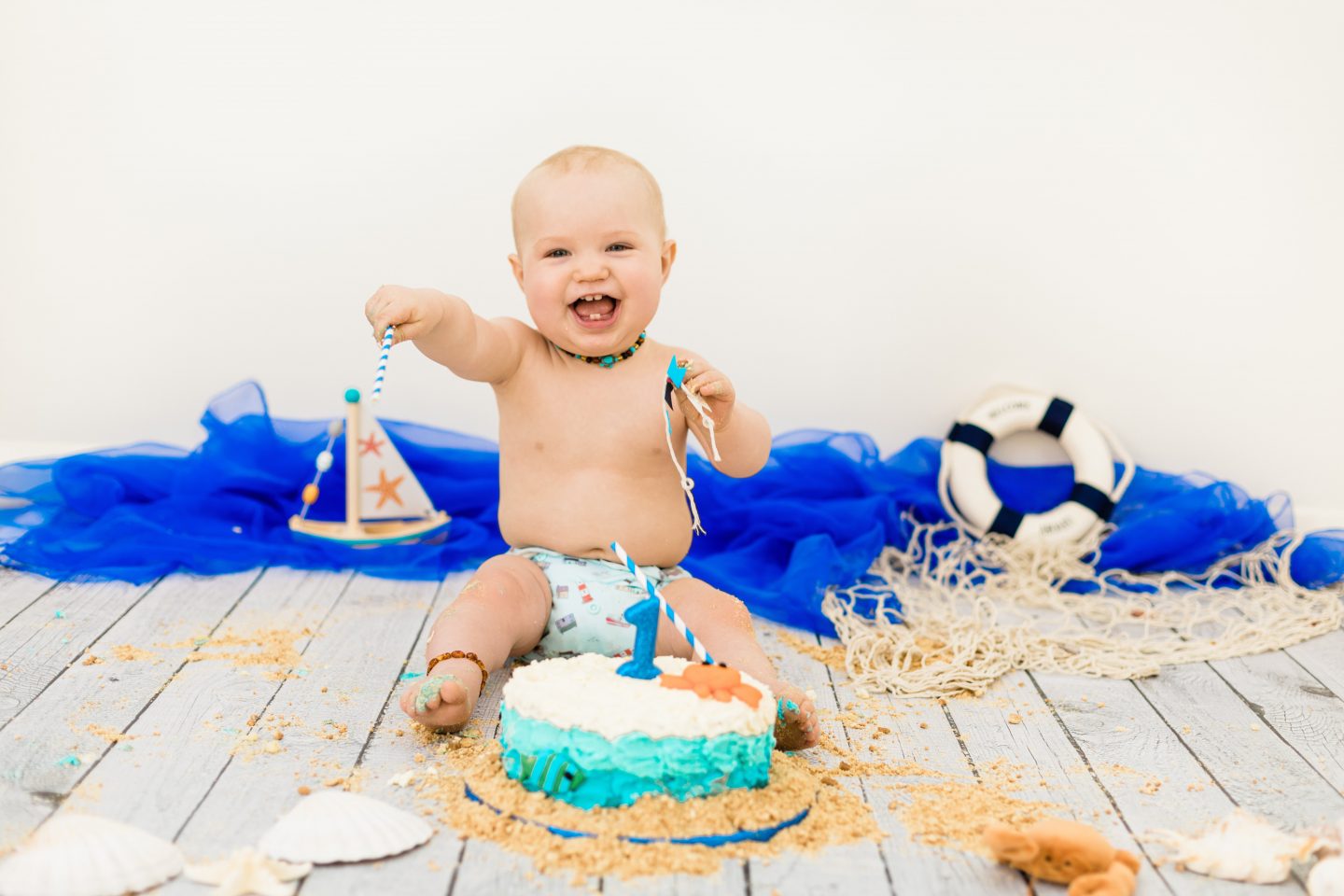 With a bit more encouragement, he did eventually decide to try a decent handful of cake! 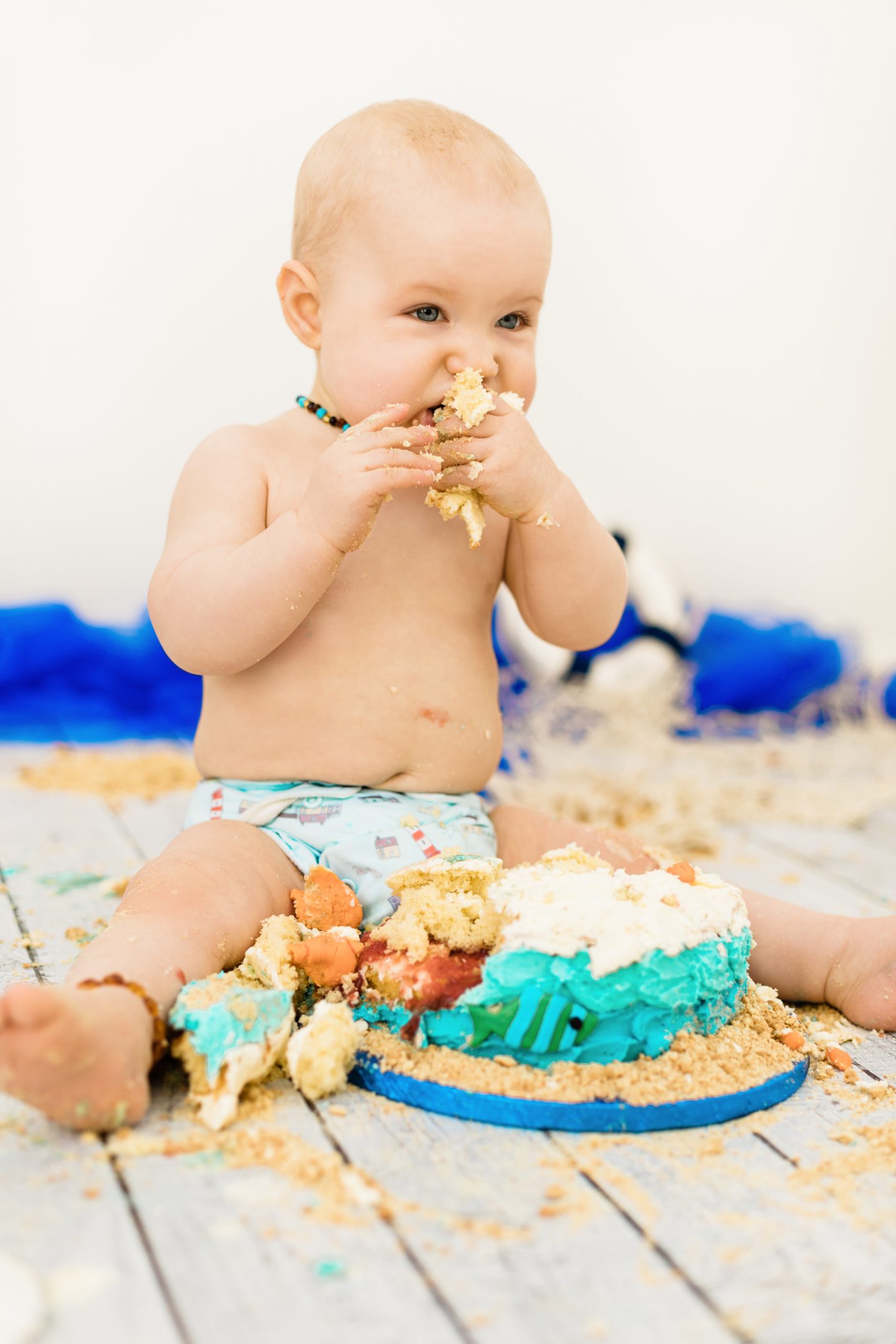 It finally looked like a cake smash had happened! He had jam on his tummy and his little toes were covered in blue icing. 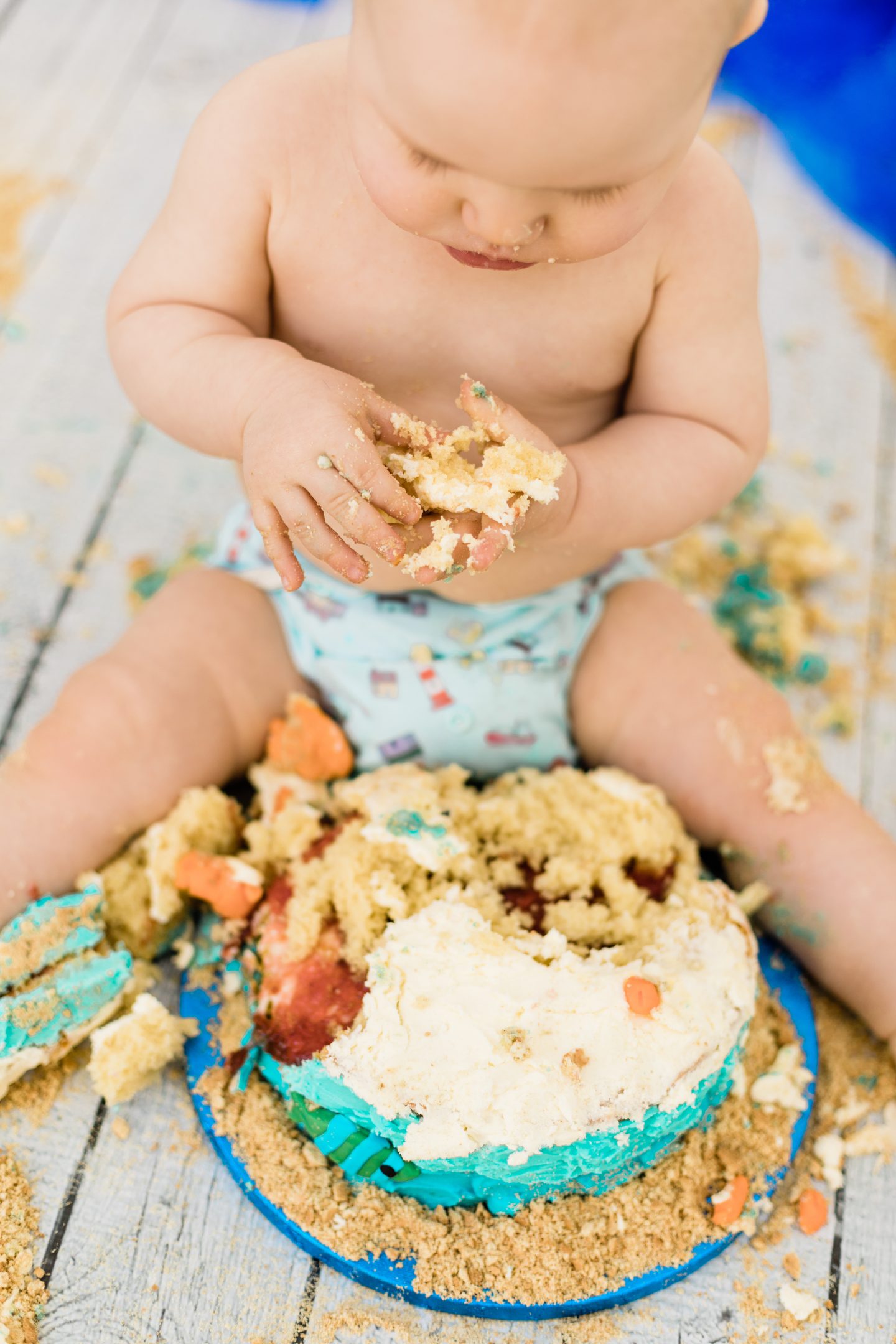 Fortunately for his sister, Autumn, there was enough unscathed for her to be able to enjoy a slice after school later in the day! After all the excitement, it was time for Reuben to have a cuddle and some milk from Mummy with the promise of a nap shortly afterwards (there was a lot of cleaning to be done first!)

With thanks to Robert Marriott for the photography in this post (this is not an AD). Please do not use these photos without our permission.