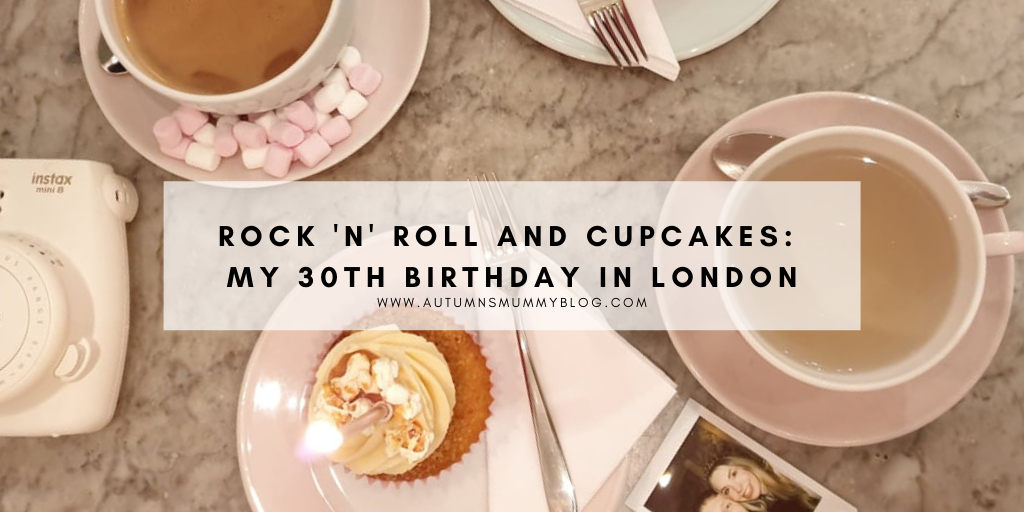 Happy New Year! I think you can still get away with saying that if it’s still within the first couple of weeks of the year? I’ve had an extended break from the blog since just before Christmas which has been quite reinvigorating! However, I’ve been keeping busy as I returned from maternity leave to my day job, celebrated Christmas and celebrated several relative’s and friend’s birthdays. This included my own birthday at the beginning of January, when I turned 30 (eek!) I celebrated with a trip to London, doing some things I’ve wanted to do for years!

Okay, I know it might sound boring to a lot of people. However, I’ve wanted to go to the Victoria & Albert Museum since I was in my early teens. I thought my birthday would be the perfect excuse to go there! After all, my husband can’t groan and act too bored if it’s my birthday. Right?!

I mostly wanted to look at the fashion and photography, but had also seen that there is currently a bag exhibition. It was really interesting and showed bags from a variety of cultures and their history, as well as more modern and creative ones. One of my favourites was a Dairy Milk clutch. Another was a simple black bag that had the words ‘MY BODY MY BUSINESS’ that lit up in neon blue every couple of seconds. 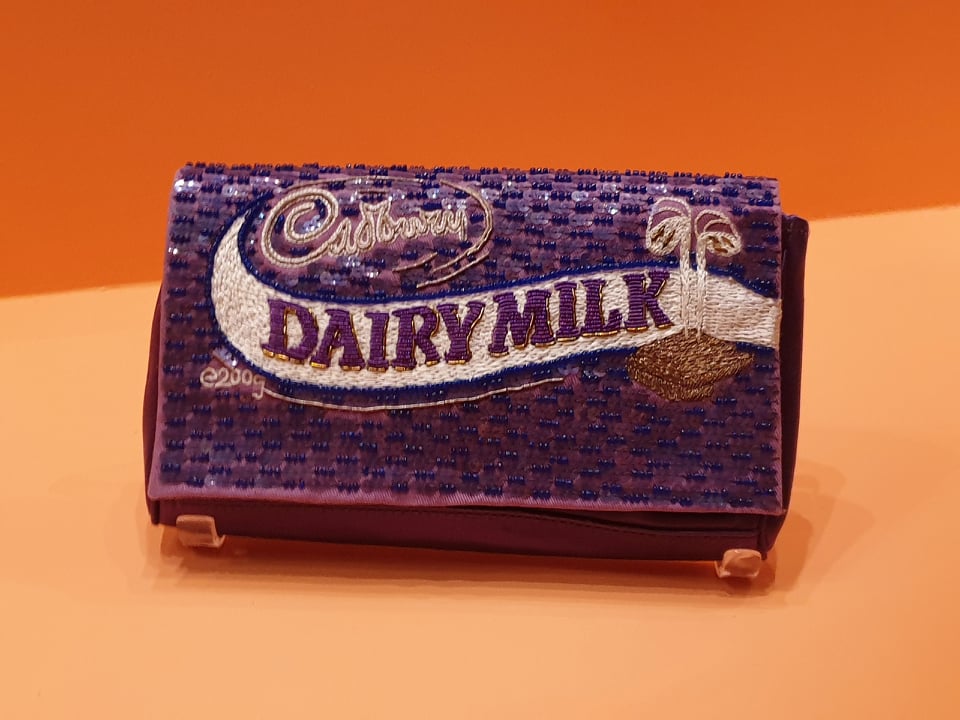 On the way to photography, we saw the jewellery sparkling and I couldn’t resist going to take a look at some of the beautiful designs. 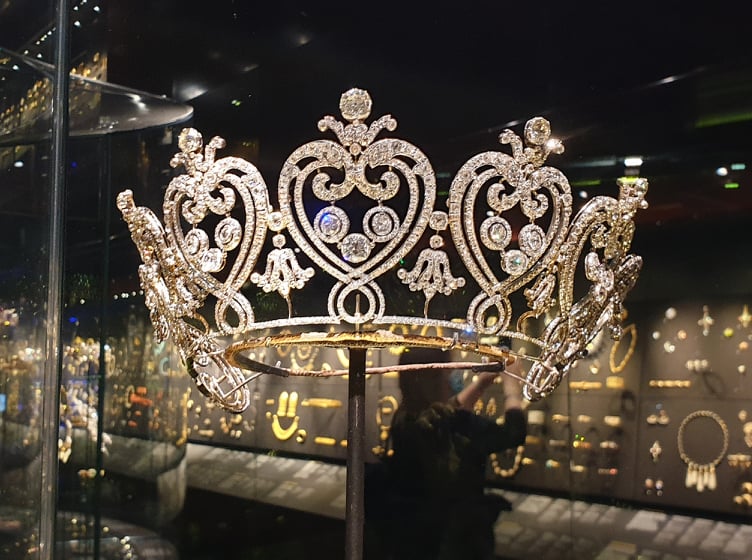 After we left the VA, we made our way to Hyde Park. On our way in, I spotted some amazing bee houses in the shape of some famous London landmarks! 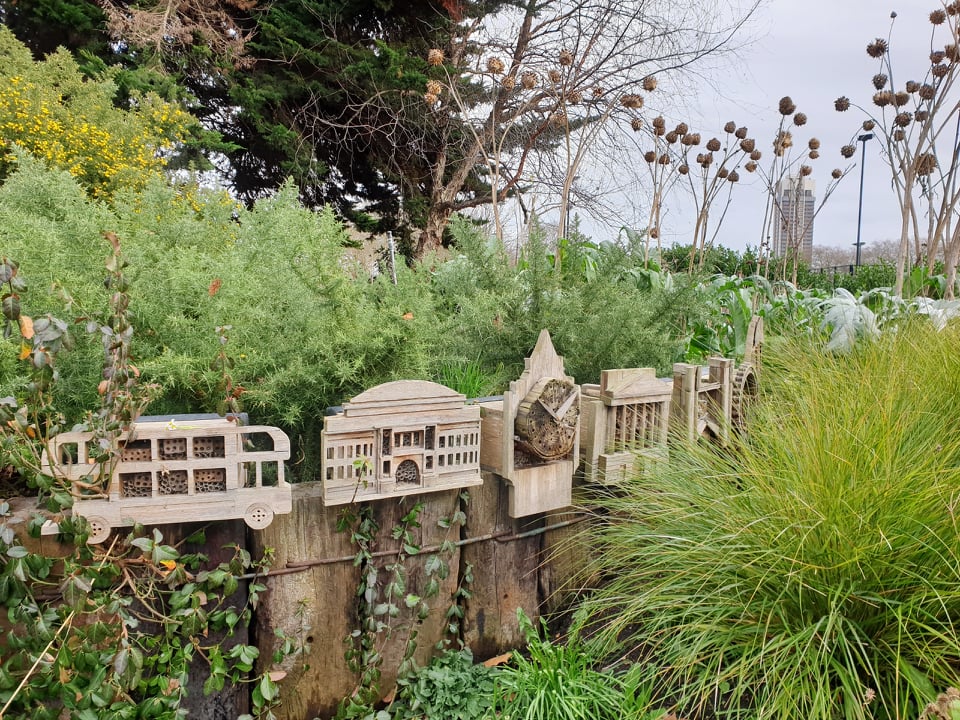 I think Hyde Park has to be one of my most favourite parks in London. I love strolling alongside The Serpentine and people watching. 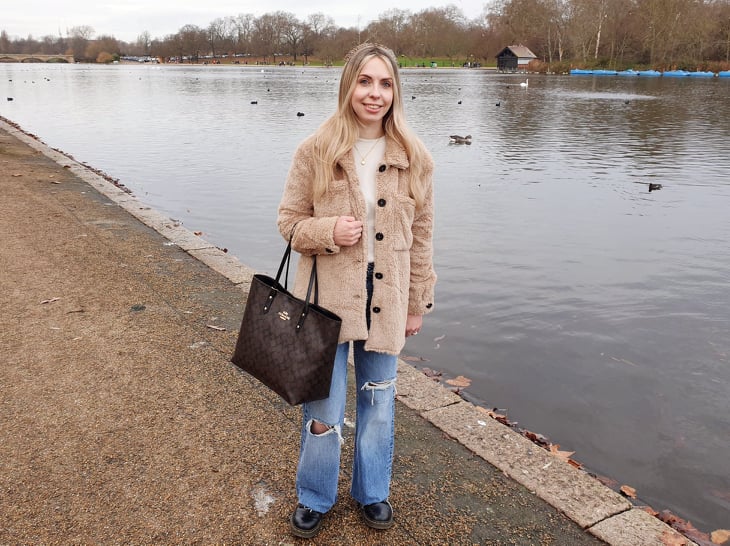 On my birthday, I was delighted to spot a marvellously dressed woman who stood out to me from afar. She was dressed in an expensive looking black and white cape, black boots, a black hat and large white Prada sunglasses and was feeding the swans on The Serpentine from a Harrod’s bag.

We didn’t have far to walk from Hyde Park to get to the Hard Rock Café for my birthday lunch. I’d been desperate to visit for years and my 30th birthday was the perfect occasion to finally justify going. Most people who know me know how much I love rock and metal, so the idea of having lunch where so many of the greats have been and displayed their guitars and stage outfits was just amazing.

Whenever I go out to a restaurant, they’re never usually playing my kind of music. Here, however, it was almost all to my taste and there were screens displaying the music videos on top of a pillar and above the bar next to me. I later found out that the waiters choose the music, or at least some of the time! Reuben was dancing away to Funkytown and some Michael Jackson songs that our server revealed were his choices.

Speaking of Reuben, I was a little worried about taking him to the Hard Rock Café. I needn’t have been at all. He enjoyed sharing Dave and I’s food and the staff were absolutely brilliant with him! Our waiter came over and started using straws to drum on the table, making Reuben laugh in delight. He interacted with him and made sure that he was happy as well as us. At another point during our visit, another waiter was shaking a salt shaker to the music and Reuben loved that too.

I had the delicious Moving Mountains (vegan) burger and chips with a refreshing strawberry and basil lemonade. It was quite a generous portion for me and unfortunately I couldn’t finish it. It was a real shame as it was perfectly cooked and sooo good. 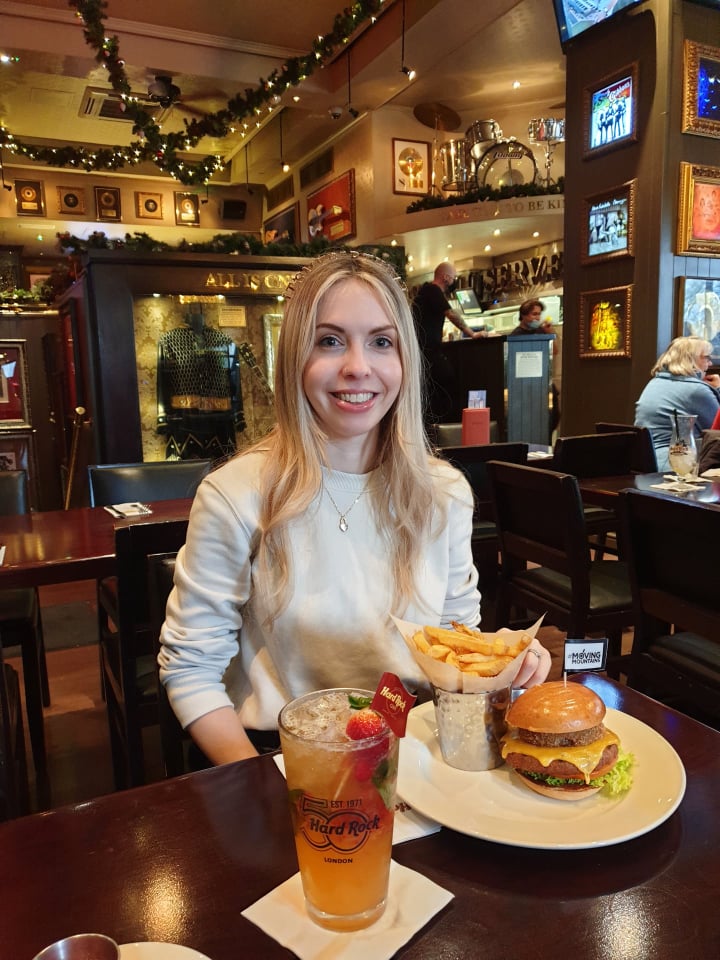 Just behind me you can see Jimi Hendrix’s coat and the neck of his guitar!

I’d already got a good look at as many things as I could from our table, but after lunch I popped on my mask so I could have a wander round and take in all the memorabilia the Hard Rock Café has to offer. One of my favourite parts was the Queen wall, including a coat of Brian May’s. 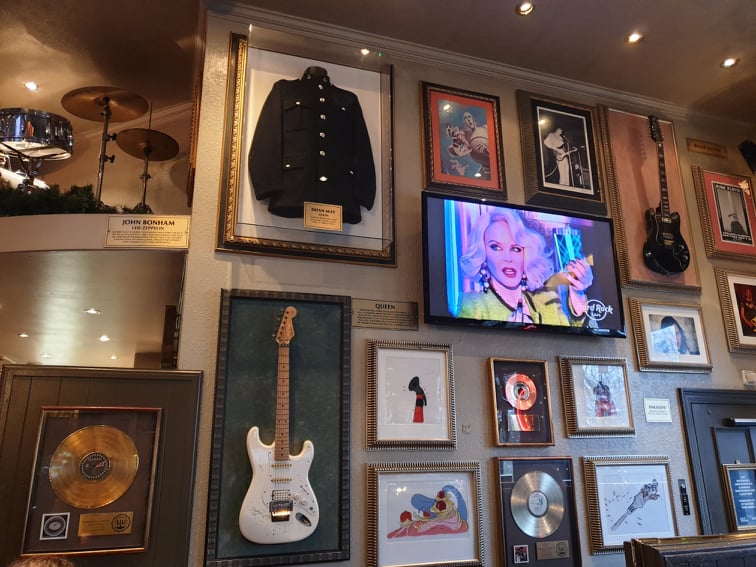 It was all just so cool, the staff were excellent and there was such a brilliant atmosphere that I struggle to find the right words to describe it.

Just next door is the Rock Shop; another amazing place to visit. As well as lots of awesome Hard Rock Café merchandise, there is The Vault.  This room is smaller than my lounge, yet there is so much music history crammed into it. A member of staff gave us a tour of the items in it, along with some interesting and humorous facts and anecdotes. Standing so close to an antique oriental chair owned by Freddie Mercury (donated by Mary Austin herself) and guitars owned by the likes of Jimi Hendrix, Keith Richards and David Bowie was just something else. 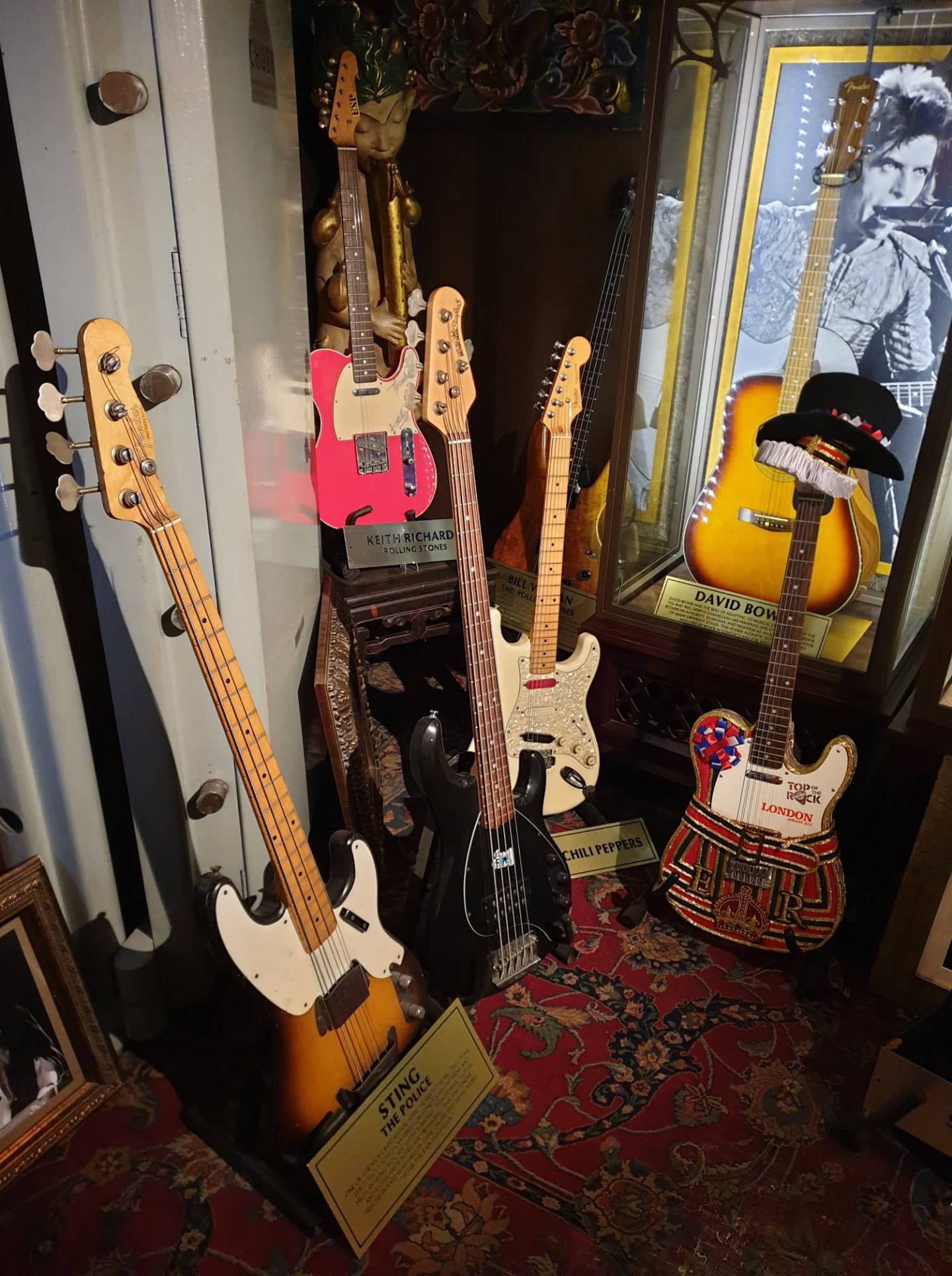 We even had our photo taken on The Vault’s iconic bench where so many famous people (some rockstars, some not) have been photographed. 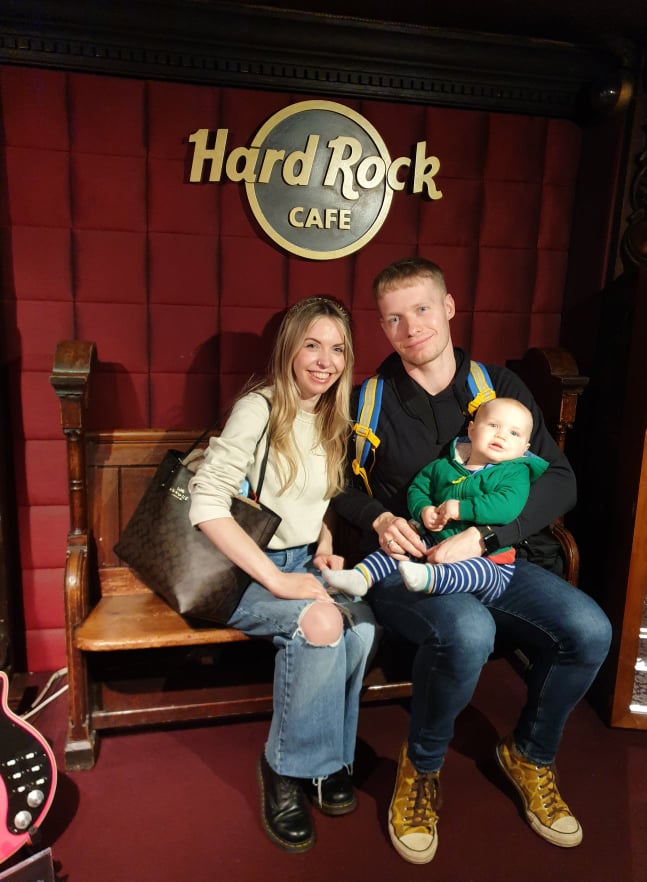 When Reuben is bigger, I’ll show him this picture and tell him about what a good education we gave him at such a young age!

Now that I was done eating burgers, I decided it was safe to put on my birthday manicure! Manicurist to the stars, Stephanie Staunton painted these amazing 90s baby nails for me! I can’t decide which is my favourite – but I think it might be the Furby!

Having a baby at the moment, it’s just not practical for me to have long nails, so the fact that these were press on was perfect. Our next stop was Peggy Porschen in Belgravia and I knew these would look so lovely with the pastel aesthetic there. 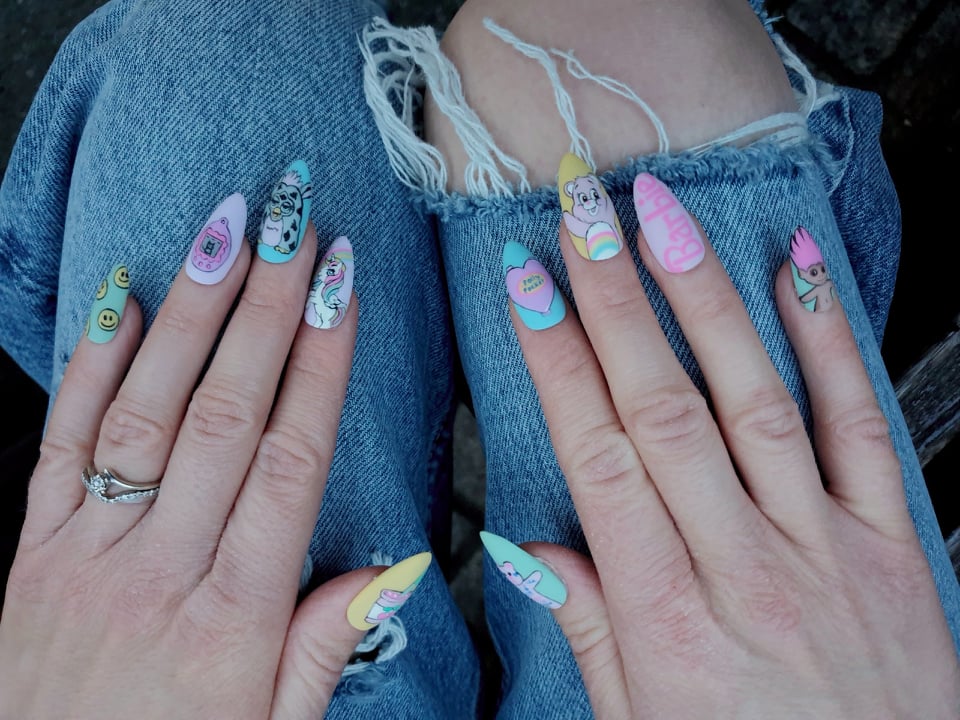 Peggy Porschen is insta-famous for its girly pink paintwork and beautiful seasonal decorations adorning the doorway and windows. I’ve been eyeing up the gorgeous cupcakes for years, not helped by one of my favourite bloggers SoInspo frequently taking gorgeous photos there on her Instagram. 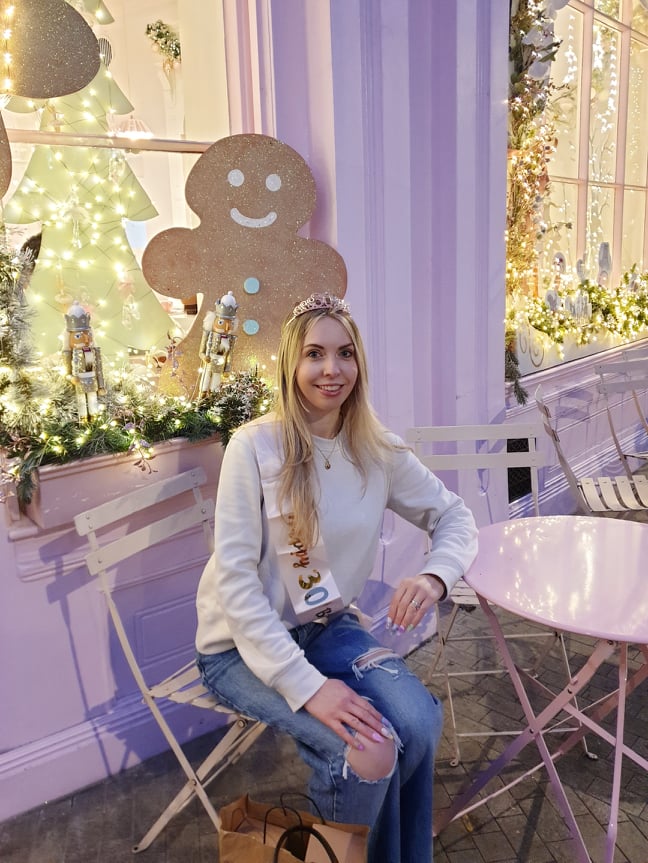 Seeing Peggy Porschen irl did not disappoint. It was just getting dark and the twinkling fairy lights looked magical! We each chose an amazing sounding cupcake, Dave ordered a hot chocolate and I chose a floral tea. 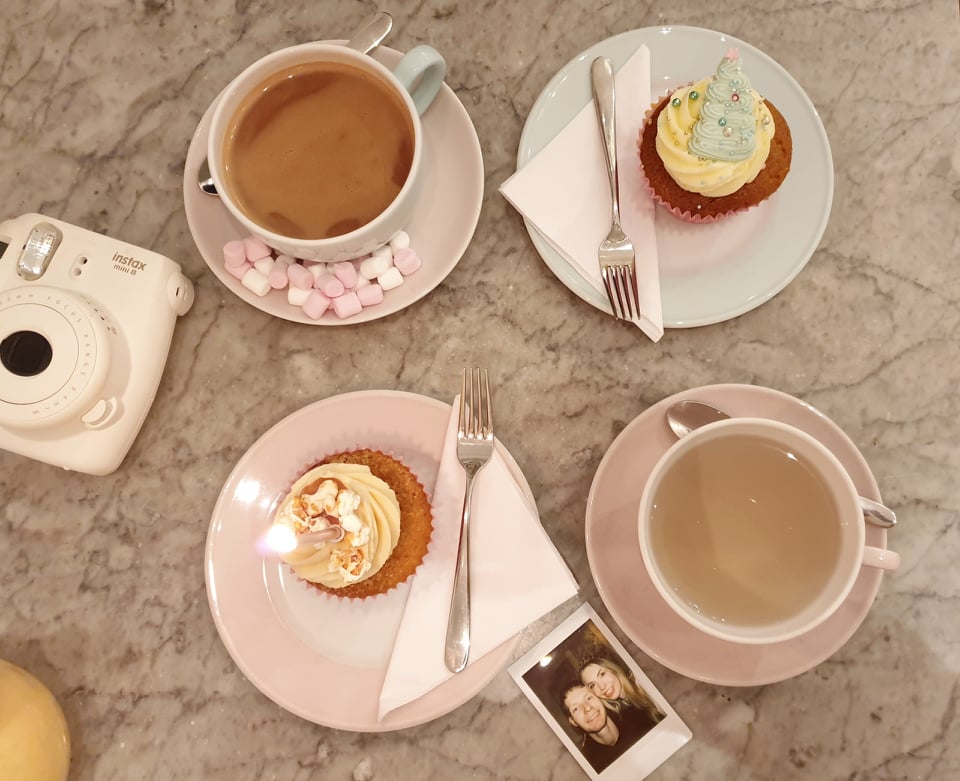 My salted caramel cupcake was amazing and the icing was so light and dreamy. If the perfect cupcake exists, in my opinion, this is it! It was even brought out with a candle on the top as it was my birthday. So cute!

The end of the day

We finished off the day with a stroll around Chelsea and stopped for a delicious hot chocolate before heading to the train station. I couldn’t resist a quick go on the swing outside King’s Cross before we set off home for cake and a takeaway with Autumn and the rest of my family.

4 thoughts on “Rock ‘n’ roll and cupcakes: My 30th Birthday in London”