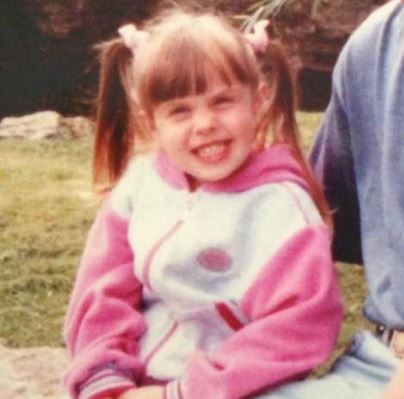 I was born right at the beginning of 1992, so looking back on things from the 90s is very nostalgic for me. I miss it in many ways, even though I often wonder what on earth my mum was dressing me in! “It was nice at the time”, she tells me. I have to admit, though, I did buy myself some sparkly silver jelly shoes in River Island the year before last when they came back into fashion!

I am a 90s kid through and through, so when I saw the 90s tag blog post by Jasmine at Thoughts From Jasmine I was so excited. Then I was asked to do it in this wonderful post over at The Bits and Bobs in my Brain.

Before we get started, here’s a picture of me in the 90s. LOL.

Please don’t hate me, but I’ve never been a huge Disney fan! I do like Disney films though! My favourites back in the 90’s were probably Lady and the Tramp and Mulan. I thought Mulan was such a strong woman and great role-model.

Are you kidding? The Spice Girls, of course! Wannabe was the first single I ever bought. I remember my parents buying it for me in 1996 from Asda’s when I was 4 and feeling so excited! I wasn’t allowed to have a Kinder Egg as well, but I wanted the tape more! I had all of their singles on tape in a basket next to my bed which I’d play on my Fisher Price tape player and sing along into the microphone attached to it. Sometimes I even stood on the top of the slide in the garden, performing their songs; mortifying, I know!

When they broke up, I cried.

Thinking back, I absolutely loved Rainbow Drops! I also liked Black Jacks, Fruit Salad, Sherbert Dips, Dib Dabs, Swizzle Sticks and those small fluorescent coloured tubes of sherbert you bought at school discos which were virtually impossible to get into. I can still remember the horrible feeling of the plastic against my teeth as I tried to rip them open! I also loved when Chupa Chups brought out Pokemon Chupa Chups which came with a Pokemon sticker!

I loved playing Frustration and Cluedo with my parents. Pop Up Pirate was a write-off after it popped up and hit me in the forehead. It hurt me and the shock made me cry! I also loved Elefun, jumping up to catch as many butterflies as I could in the net!

Beanie Babies were a staple 90s toy, so it was brilliant when they were in Happy Meals. I also loved when they did Hot Wheels cars and tracks (I’d always tell my parents to make sure they gave me the ‘boy’s toy’ when they were doing Hot Wheels). Betty Spaghettis were another good one. I think the small Pokemon toys were probably my favourite though and being the geek I am, I think I still have my Butterfree somewhere!

My favourite three authors were probably Enid Blyton and Roald Dahl. I didn’t discover Harry Potter or Jacqueline Wilson until just into the 2000s! I wanted to visit the Faraway Tree so badly, to visit the different lands, try the amazing sweets and go down the slippery-slip on a carefully selected cushion. Roald Dahl’s books are just so brilliant that I couldn’t even attempt to choose a favourite! The film adaptation of Matilda was great too, but scared me SO much. I loved Miss Honey though.

As a young teenager, I loved Tammy! However, I was 7 by the end of the 90s so I didn’t really have a favourite clothing store. I remember having a mustard jumper and dungarees that I loved from Mothercare. Once I begged my mum for some cheap jeans from Tesco to customise like I’d seen in Girl Talk magazine, but to no avail.

How am I supposed to choose just one? I loved Pokemon, Pb & J Otter, SM:TV Live, Fun House, Postman Pat, Noddy and Fireman Sam to name just a few. TV for kids was GREAT in the 90s! If I had to choose, I guess I’d say SM:TV Live. Every Saturday morning I’d watch it and my parents wouldn’t mind watching it either. From Cat the Dog, to Chums (their version of Friends), Wonky Donkey and Anty and Decky the garden goblins, it was all just pure brilliance! How they got away with things like ‘dizzy water’ and ‘Prozac’ the giggle fairy, I’ll never know!

9.    What show would you watch after school?

I remember watching Mona the Vampire, Arthur and Hey Arnold a lot after school! I also enjoyed How 2. I could never really get into Blue Peter.

Nope! I always wanted a Tamagotchi so badly, but my parents thought they were rubbish. I had a Furby though – actually, I had two!

11. Favourite video game and system to play on?

I didn’t have a video system until the early 2000s when I got a Playstation 2, a couple of years after its release (which was awesome, because it meant I got to have a much more modern looking silver one rather than a black one!) I did sometimes get to play with a friend’s Playstation though, which I loved.

Body glitter and skirts over trousers. I actually managed to talk my parents into getting me a grey skirt/trouser combo and I felt so cool at my primary school! As for body glitter…why, just why? I still remember the sickly sweet smell of mine that I’d put on before school discos where we’d dance to Oops Upside Your Head, Don’t Blame it on the Boogie, Vindaloo, Cotton Eyed Joe, YMCA and 5, 6, 7, 8.

I absolutely loved my Furbies, but I think my favourite toys were probably my Barbies and toy cars. I’d spend hours playing with the cars and doing fashion shows with the Barbies. In the summer, Ken would come outside with me in his swimming shorts and one of my Barbies who had a bikini.

I didn’t have cable or satellite TV until the early 2000s, so sadly I missed out on Nickelodeon programmes in the 90s! I later loved (and still enjoy) programmes such as Drake and Josh and Spongebob Squarepants though!

So, now I need to tag some other 90s kids to do this if they’d like to!

Kez at What Would Dory Do?

Tasha at It’s a Tasha Thing

Alicia at Alicia a la mode

If you do decide to do it, please send me the link as I’d love to reminisce with you!