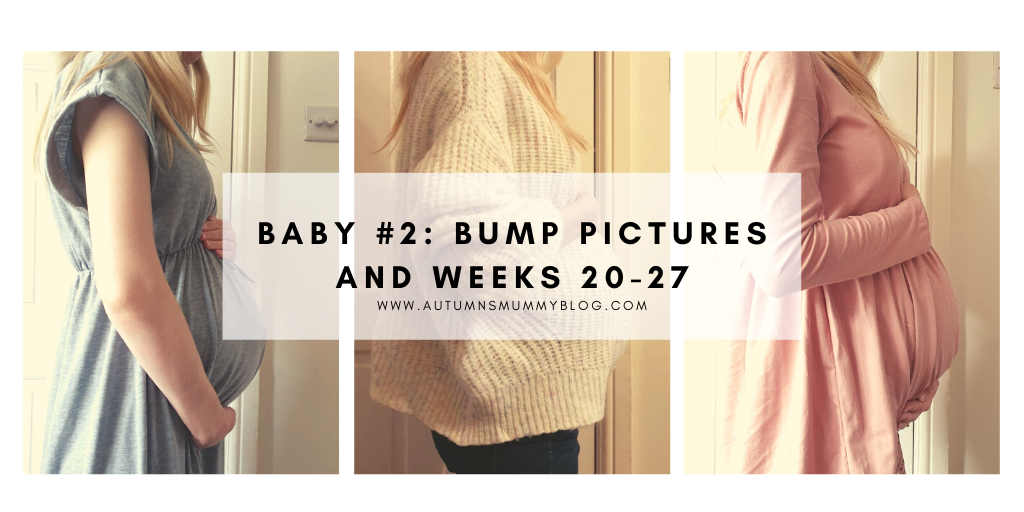 The first half of the second trimester of pregnancy flew, but I swear the second half flew even faster! Time seems to be going in a really odd way this year and I was shocked to hit 28 weeks and find I was at the third trimester already! That said, the last few weeks haven’t been without their problems.

I know others have it worse, but pregnancy is hard work! I haven’t exactly gone without pain and discomfort over the last few weeks. At around 19 or 20 weeks, I started to get pelvic girdle pain. In hindsight, I had this when I was pregnant with Autumn. Despite barely being able to walk or stand for long in the third trimester, I thought it was a normal part of pregnancy! It’s only since that I realised that’s what I had. Unfortunately, it started a lot earlier this time. Of course, it’s more inconvenient this time too, having a VERY energetic 4 year old to try and keep up with!

Then, at the beginning of September, Autumn went back to nursery. I knew it wouldn’t be long until she gave me a cold. Knowing that one of the lovely side effects of pregnancy is having a weaker immune system, it was more inevitable than ever. Somewhat predictably, just under 2 weeks into the term she woke up one day with a cough and her nose running like a tap. A couple of days later , of course, I came down with it. I suspect I would have got it anyway, but I’m fairly suspicious that I got it from her sneezing straight into my eyeballs! Now, stinking colds during pregnancy are no fun as you can’t really take anything that will help much. Still, I got through it with a combination of hot honey and lemon, hot Ribena, Sterimar and some pregnancy safe throat sweets.

I was still slightly suffering at the beginning of October, when I woke up one morning with The. Worst. Toothache. Ever. Apparently pregnancy can cause or speed up wisdom tooth problems. Anyway, before the day had passed, I was in agony. I couldn’t sleep, I couldn’t eat, I couldn’t talk. In fact, I couldn’t really concentrate on anything at all at my worst. All I could really do was sit there and cry, rocking in an attempt to soothe myself. My attempts at distraction didn’t work because the pain was just so intense and paracetamol did nothing. How I wished I could take ibuprofen or something a bit stronger!

I am in even worse agony today…feeling very sorry for myself. The dentist prescribed me amoxicillin, but nothing is helping the pain 😭😭😭

On my way there, I heard on the radio that people are evolving to not have wisdom teeth. Ffs, why couldn’t I be one of them? 😅 pic.twitter.com/DqIlJxvcHW

I think I might blog about this separately as it’s a long story, but thanks to my rubbish dentists, I ended up in loads of pain for almost 2 weeks…which would likely still be ongoing had I stuck with what they were telling me. Of course, I was in no fit state to really go anywhere over that fortnight or so. Therefore, by the time I started to feel better after having the tooth removed, I was going pretty stir crazy!

What I found was that in that time, the pelvic girdle pain had got a lot worse. Perhaps everything was a bit stiff as a result of my inactivity? Fortunately, I’d got in touch with my midwife at 24 weeks or so and she referred me to a physiotherapist who gave me an appointment very quickly. I have some daily exercises now which seem to be helping to ease things a little. My physiotherapist also recommended a maternity support belt and how I should wear it. Doing this when I know I’m going to be walking around for longer than 20 minutes or so takes some of the weight and pressure off, making the pain not quite so bad.

The other thing I’ve been dealing with is awful indigestion and heartburn. Ugh! I didn’t have much of a problem with this with Autumn, but it’s been pretty awful. Bed time has been the worst, with me having to sleep propped up.

Anyway, that’s enough complaining. There have been obviously been good things too! Unfortunately, I had to go to my 20 week scan at the hospital on my own. It was still a positive experience though. I felt more relaxed than at the 12 week scan and didn’t get told off for my breathing (as I did before, due to feeling anxious). To be honest, when I went for my 12 week scan I had only ever had bad experiences in that hospital. There was part of me expecting the worst – and that certainly didn’t help. However, everything seemed to be going well from what the sonographer could see. It was so lovely to watch the screen, I could have happily laid there all day. Although, I was not happy to learn that baby had a much larger than average head. Help!!

There is absolutely no way you could ever mistake me for not being pregnant anymore, unless you saw me from the back! Unfortunately, I was in too much pain with my wisdom tooth to pose for a picture for week 27.  I did get photos of the rest of the second trimester though. It’s great seeing how much baby and I are growing each week! 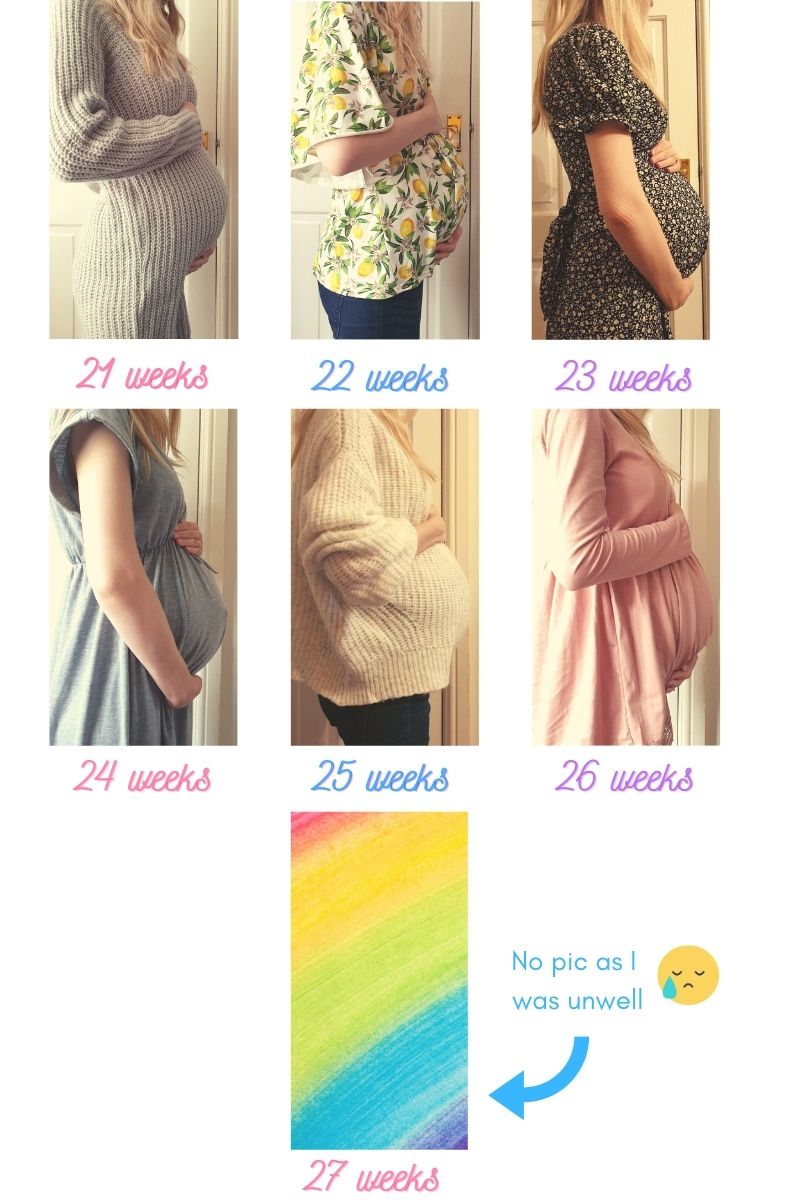 I feel like all I really did was complain in this post – probably largely down to my constant discomfort! However, it has been lovely feeling the baby move so much more and getting into the rhythmn of knowing when I can expect to feel kicks. I can even feel what some body parts are now when it happens, which is amazing! Baby especially loves to wiggle after a hot chocolate!

The second trimester has flown and I’m half expecting the third to as well. It’s all becoming more and more real and I’m so excited to meet him at the beginning of January!