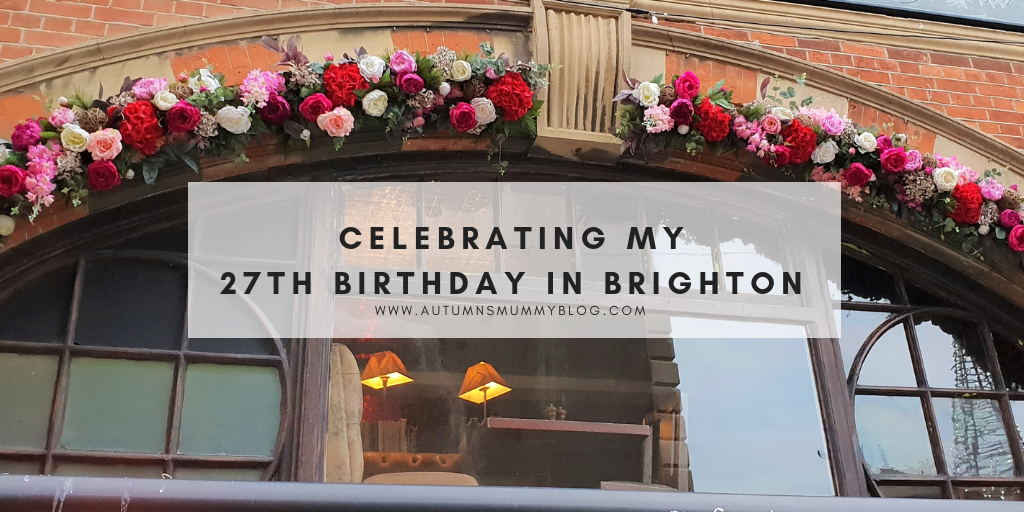 Happy New Year! It feels a little late to say it now, but I’ve only returned to blogging this week after Christmas. As it was my birthday on New Year’s Day and the first week of January is often quiet, I decided to take it off. If you’re interested, my first post of the new year was about how you can help wild birds this winter, which was published on Monday. I wasn’t sure if I was going to write a post about it. However, I had such a lovely time celebrating my birthday in Brighton that I wanted to relive it by writing about it here!

My birthday itself was pretty good! I brought in the New Year with my husband, parents, nan and brother. I went to bed at about 3am after they’d gone home. Dave took care of Autumn in the morning so that I could stay in bed as late as I wanted to. One of my best friends came round for a while in the afternoon, then my family came round later and we had pizza. I was lucky to receive lots of lovely cards and presents. Some of my favourites were a pair of shiny purple Dr Martens from my parents, a gorgeous basket of cruelty free beauty products that my mum thoughtfully put together and a personalised necklace from my husband.

One of the main problems with my birthday is that everywhere is closed and many people are hungover. As such, it’s difficult to go out and do anything! On the 2nd of January I was booked in to get my first tattoo, (watch this space for a blog post about it), so we decided to go and do something on January 3rd.

Celebrating my Birthday in Brighton

I chose to go to Brighton because I liked the idea of being by the sea, visiting the pier and checking out the shops. I’ve only been along the seafront at Brighton before and I felt that I was missing out.

On my previous couple of visits to Brighton, I’ve always felt some kind of vibe that appeals to me. I liked the pier and the style of buildings and railings when walking along the seafront. However, on this venture I found that there was so much in Brighton that I had indeed been missing out on!

We stepped out of the (very expensive) car park to see some street art and an old fashioned looking tattoo shop. As we ventured around the corner, I saw the Dr Martens shop which had a jukebox in the corner. Just along from it was this pretty restaurant and cocktail bar/nightclub called Bohemia. The flowers were beautiful and it looked very inviting. I’ve been reading up on some of their cocktails since, which look amazing! 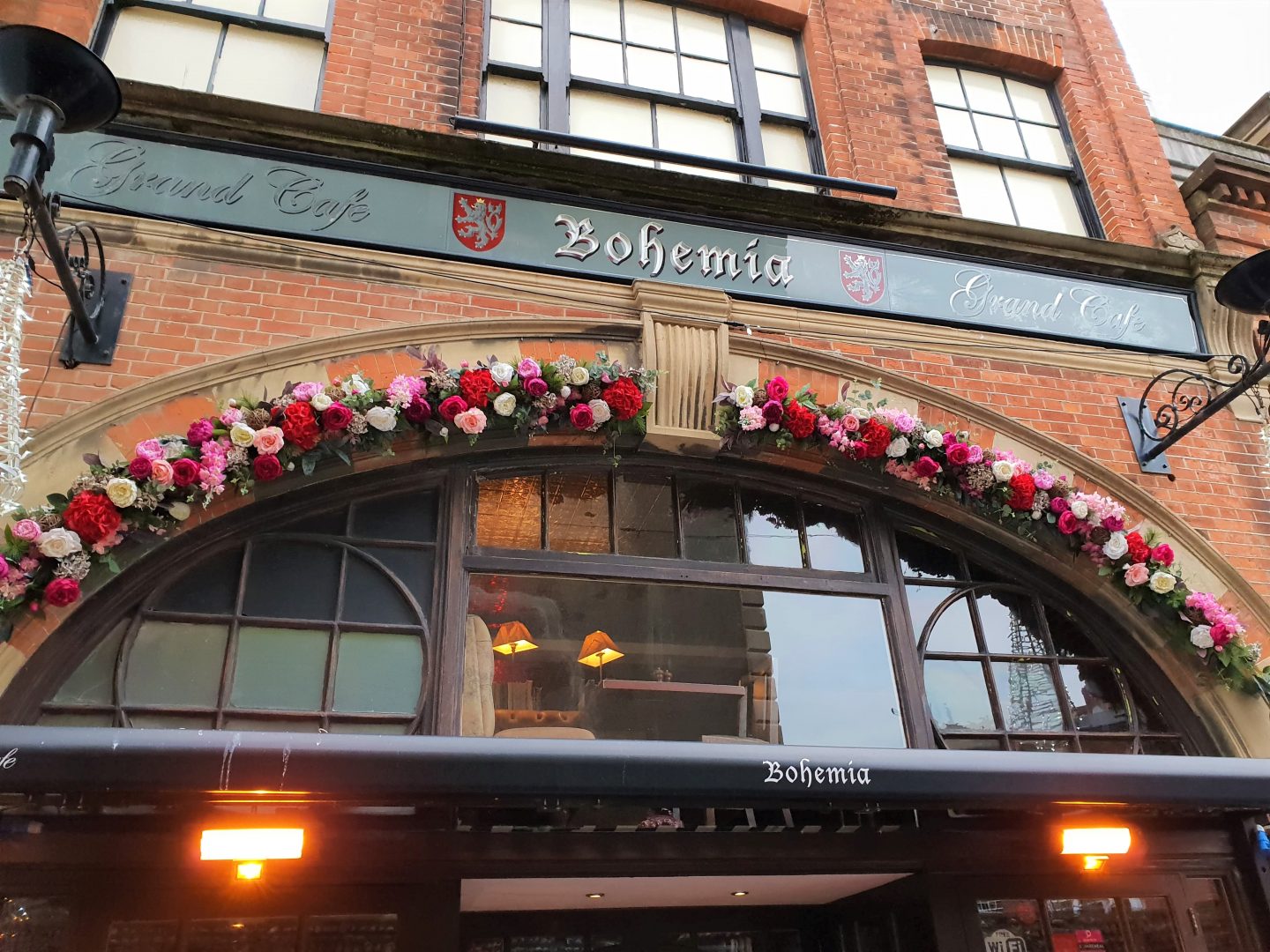 We didn’t need to walk far before we reached The Lanes, which has a number of unusual shops. The first we stumbled across was The Duck House. The window display was wonderful – just look at the duck nativity and the ferris wheel! I was amazed to peer in and see hundreds of rubber ducks! Unfortunately, we didn’t go in as there were already 3 pushchairs in there and I couldn’t have fitted in with Autumn’s too. 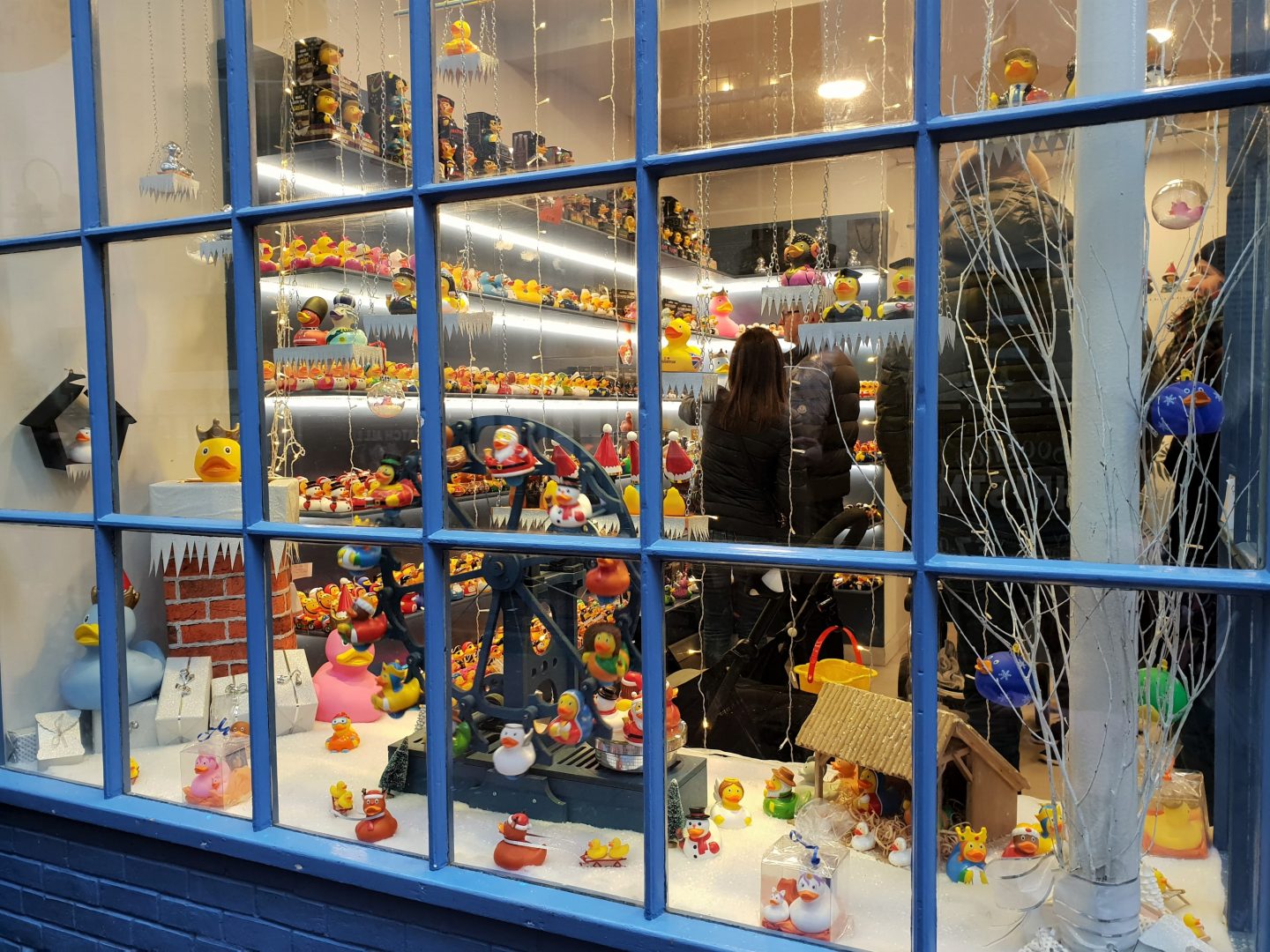 Walking along the narrow little lanes and quirky shops, it felt like being in Diagon Alley! A couple of minutes later, we found the famous Choccywoccydoodah. If you haven’t heard of them, they make amazing sculptures out of chocolate and the most out-of-this-world wedding cakes! Many celebrities, including Elton John and Tinie Tempah, have had things made by them.

The window display was stunning and as we walked in, the scent of chocolate was glorious. I wished we could have gone upstairs to the cafe, but we had Autumn in the pushchair. Perhaps we’ll be able to return to visit sometime whilst someone else looks after her for us. 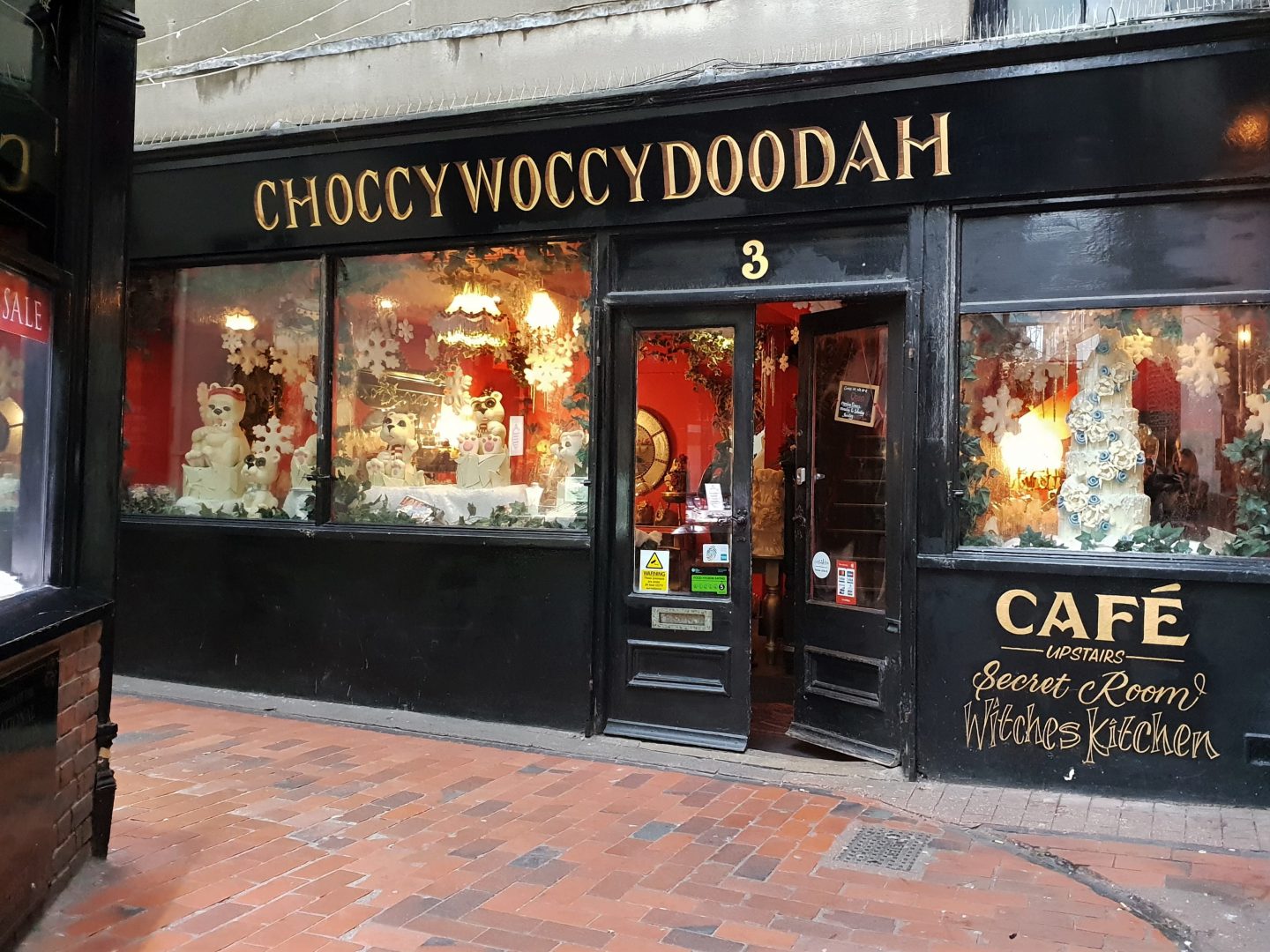 Other shops in Brighton

Away from The Lanes, I was excited to visit Irregular Choice. I’ve been a big fan of their shoe designs for 14 years or more now and wore one of their designs on my wedding day. I also got a pair for Christmas from my husband, much to my delight! 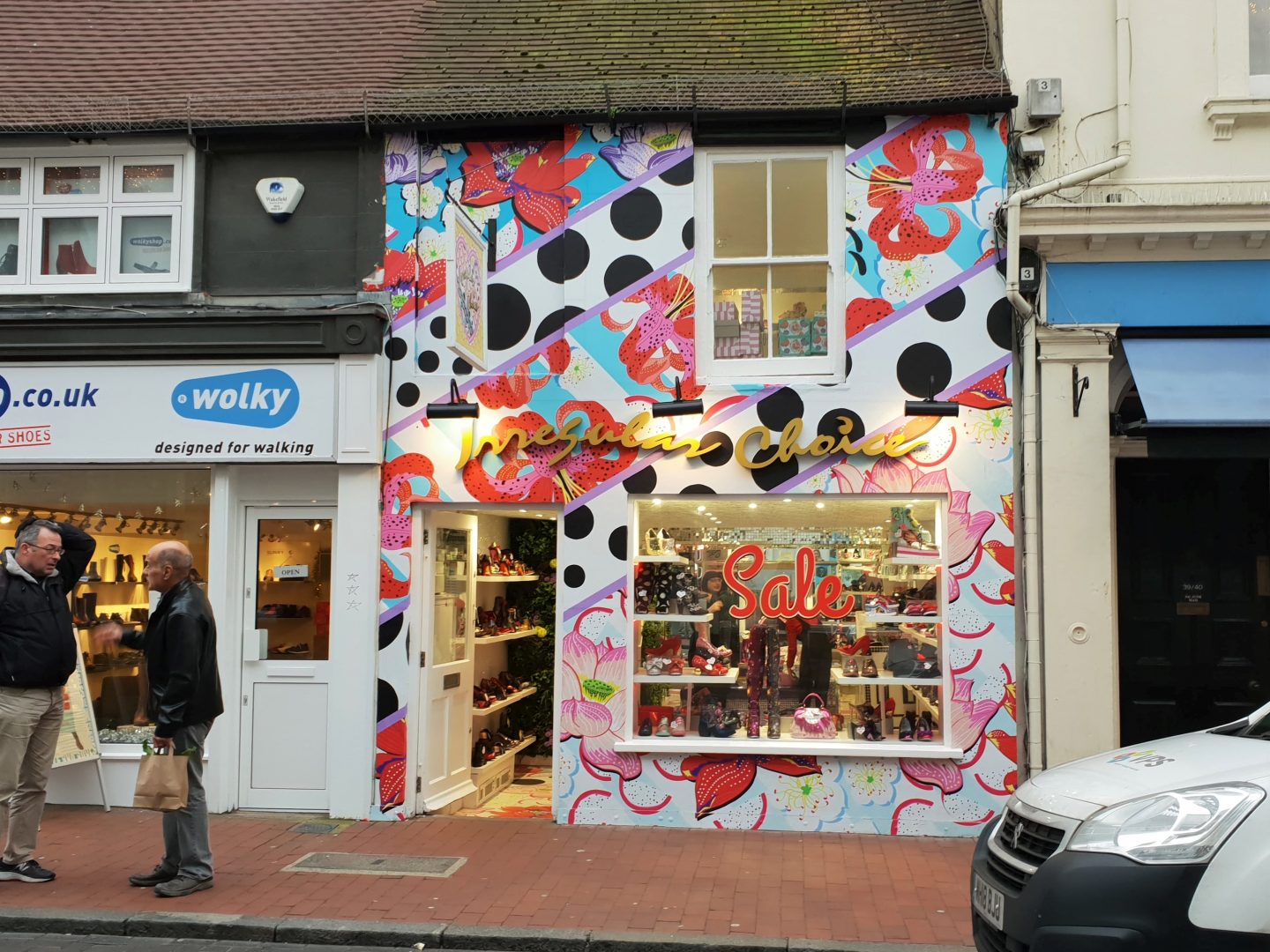 It was amazing seeing so many of the shoes I’ve coveted online in real life. However, I kept my purse strings tight and didn’t make any purchases until we got further along the road. I got Autumn a cute little dungaree dress and treated her to a puzzle in Toby Tiger. 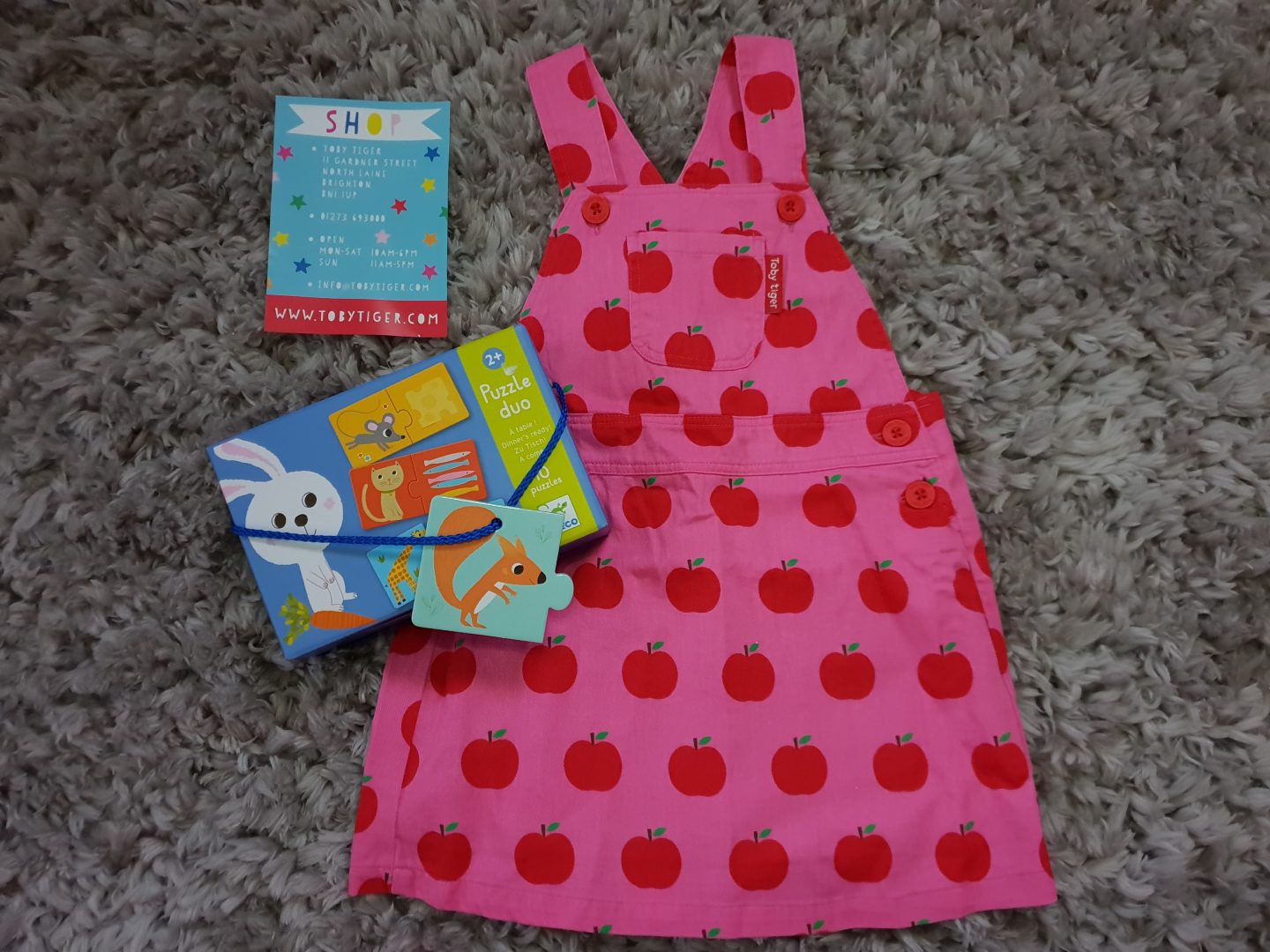 Then I spotted a Chinese supermarket called Yum Yum. It smelled SO GOOD in there. I got my pocky fix and loaded up on some other treats, as I always do when I come across similar shops. 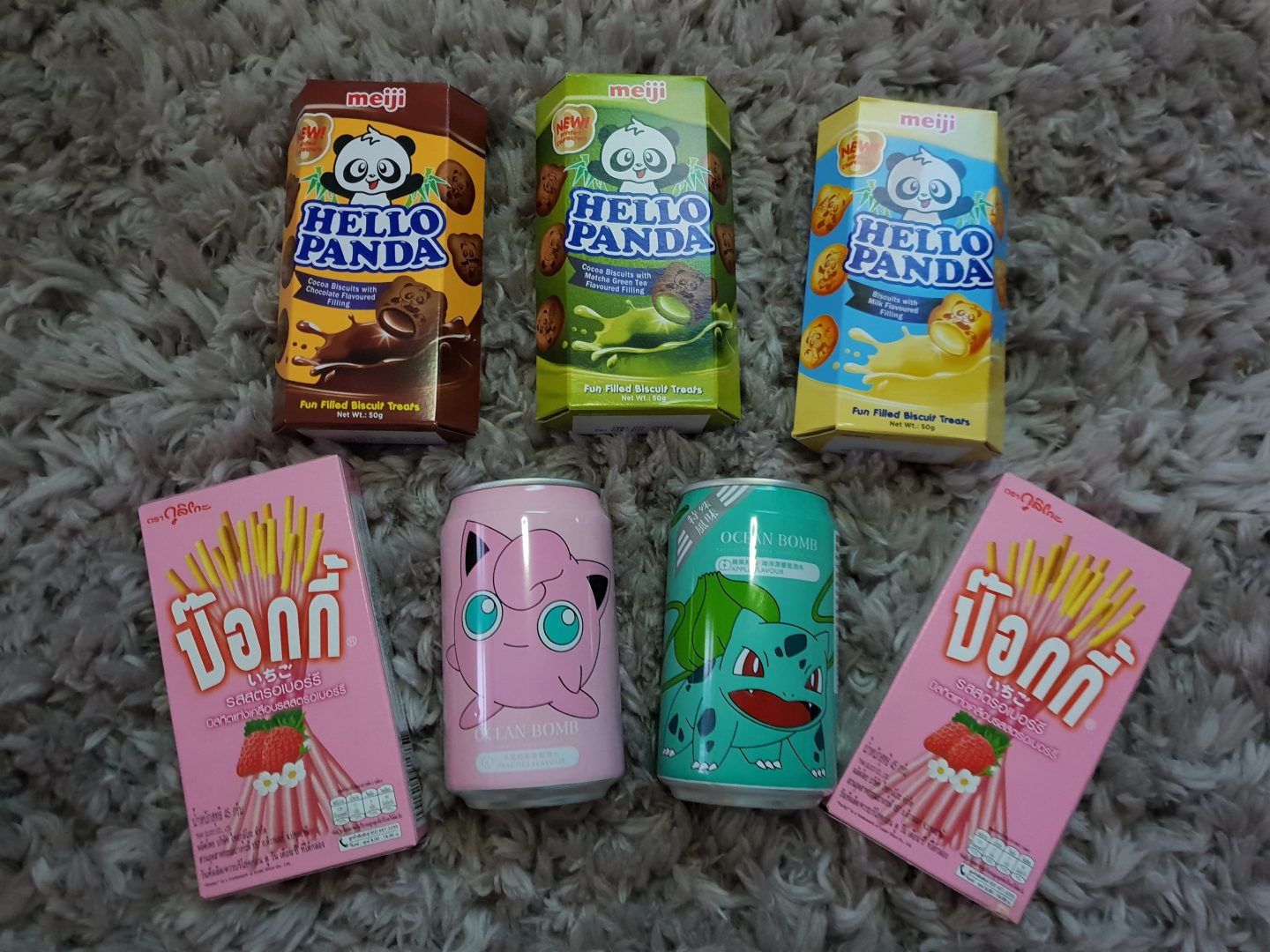 After that, we walked to Oliver’s, stopping for some of Roly’s Fudge on the way. It was the crumbliest fudge I’ve ever tasted and some of the best. It’s definitely worth a visit – I recommend the salted caramel flavour! Anyway, I digress. Oliver’s was a bit further out from everything else, but for a Harry Potter fan it is more than worth it! I’d found out about it on Facebook and I wasn’t left disappointed when I saw it in the flesh. It’s clear to see that an awful lot of thought and passion has been put into it. 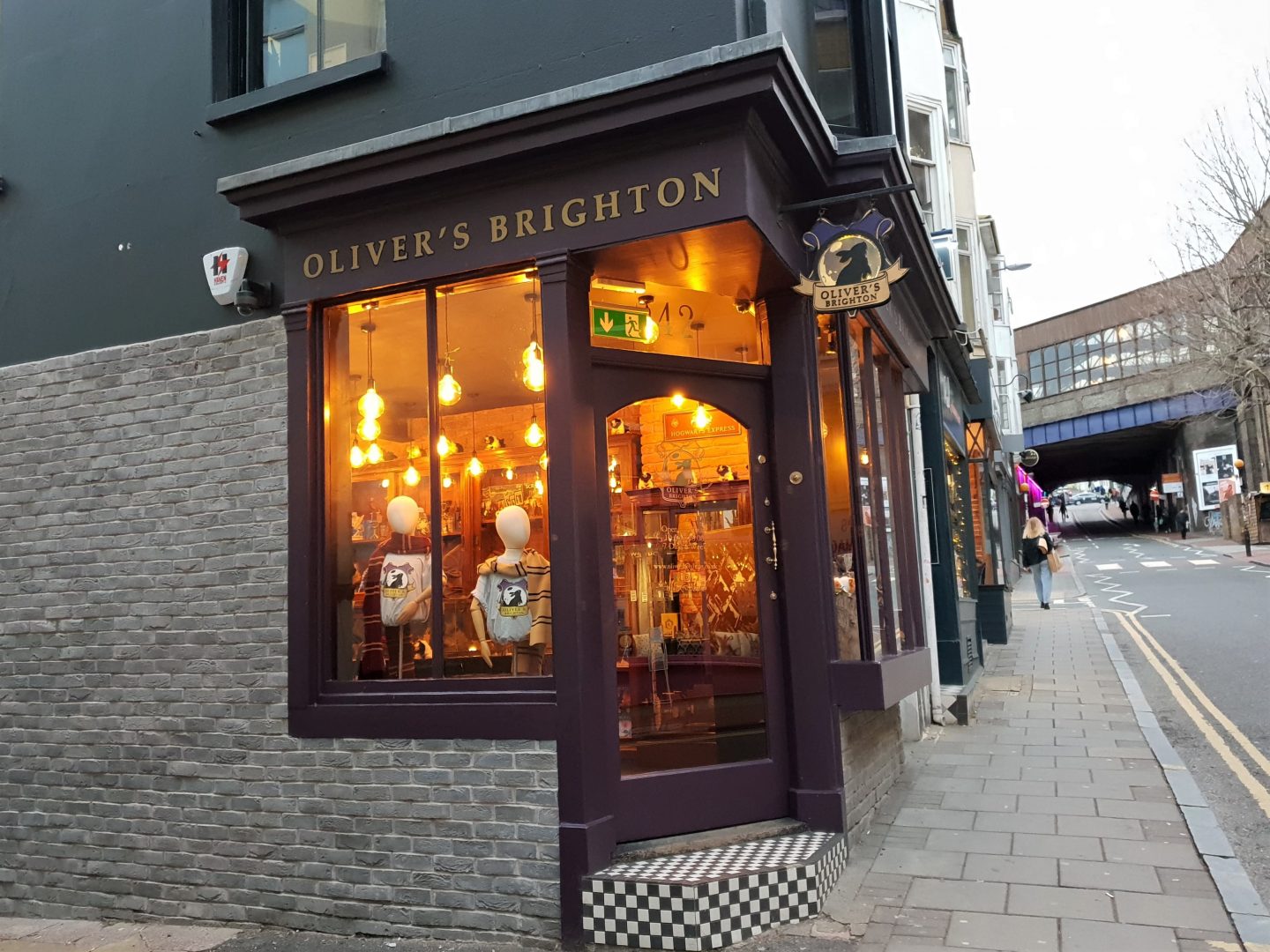 The shop is absolutely magical and so beautifully done. It feels like you really could be inside a shop on Diagon Alley (just imagine if it moved to The Lanes one day!)

Oliver seems such a nice guy too, we enjoyed talking to him. As you may have seen me tweet the other day, he also helped us out by lending us a screwdriver! Autumn had taken her Peppa Pig laptop with her, but the batteries started dying almost as soon as we set foot in Oliver’s and it would not shut up. It was somewhat ruining the aesthetic really and Autumn was getting annoyed. Once that was sorted out, we could browse much more happily.

We were in our element, browsing various Harry Potter gifts and memorabilia, some of which I’d never seen before. I left with a special stamp, some Ravenclaw goodies and some Butterscotch Beer. Oliver even gave me serving suggestions! I’m yet to try it out, but it’s in the fridge just waiting to be poured into my goblet. 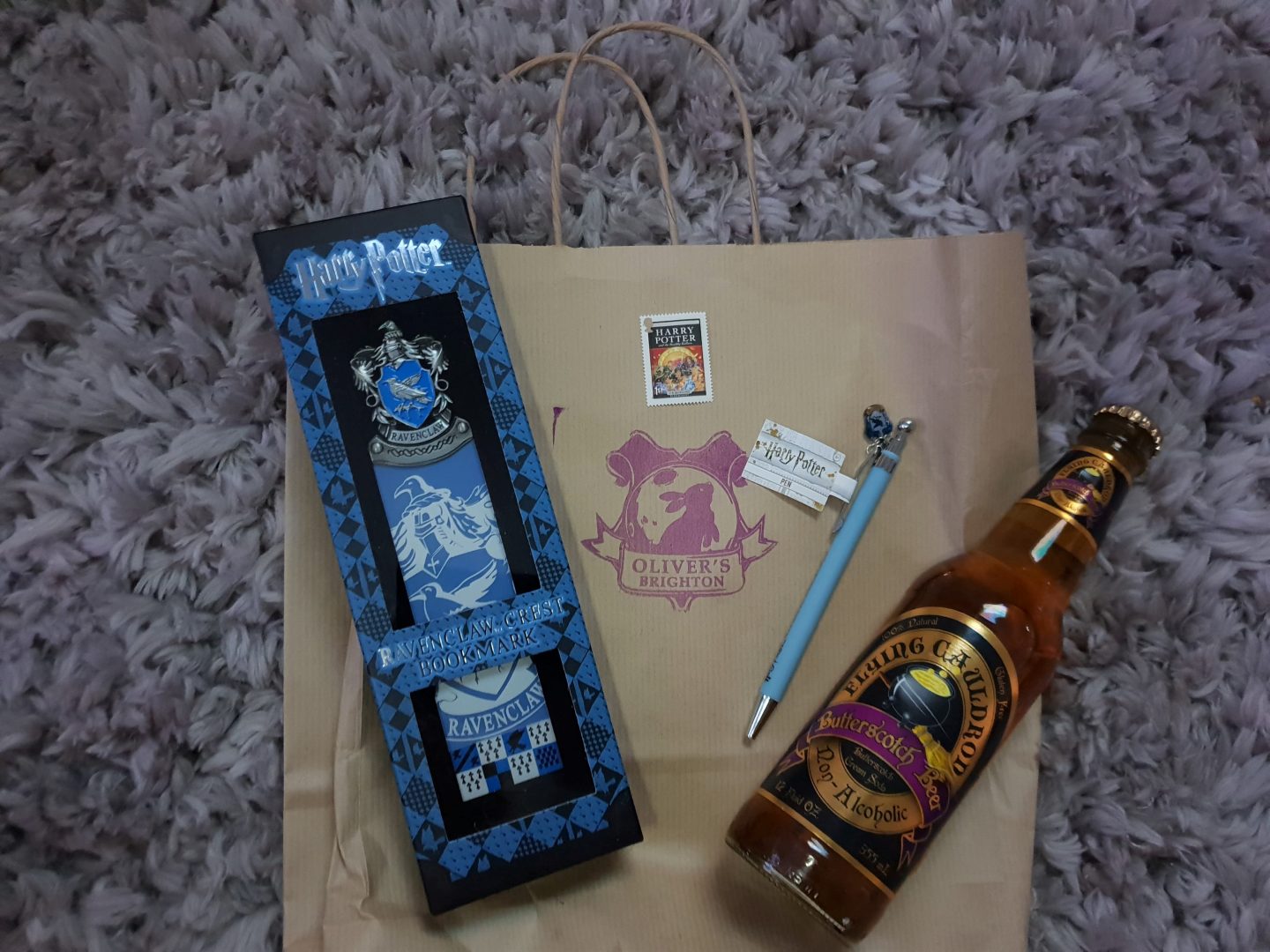 One of my most favourite things walking around Brighton was spotting all the street art. If only all graffiti were this artistic! In Trafalgar Lane, a few steps down the hill from Oliver’s, was some brilliant artwork. 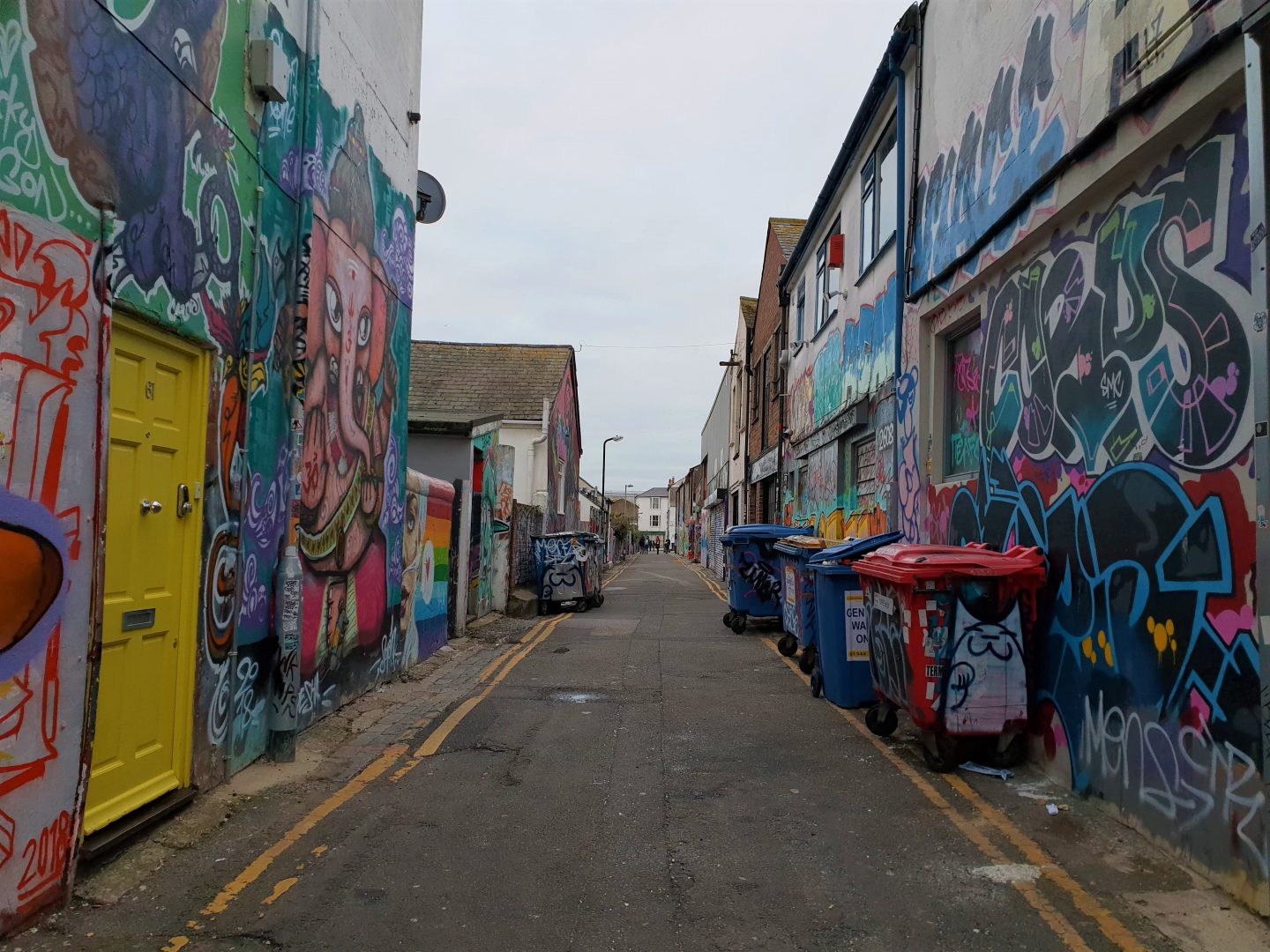 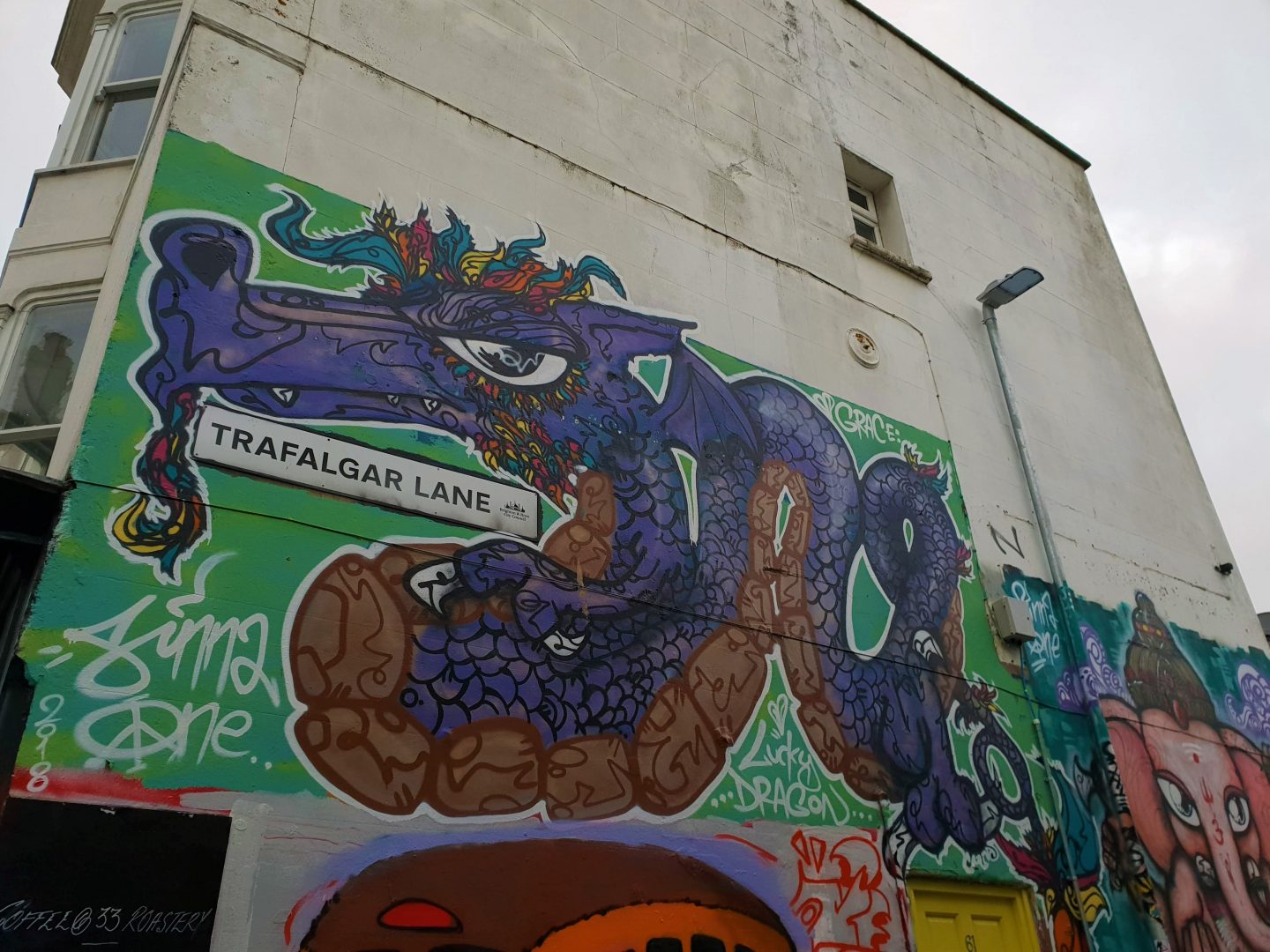 Walking around the main streets of Brighton, you could hardly turn a corner without seeing more art! 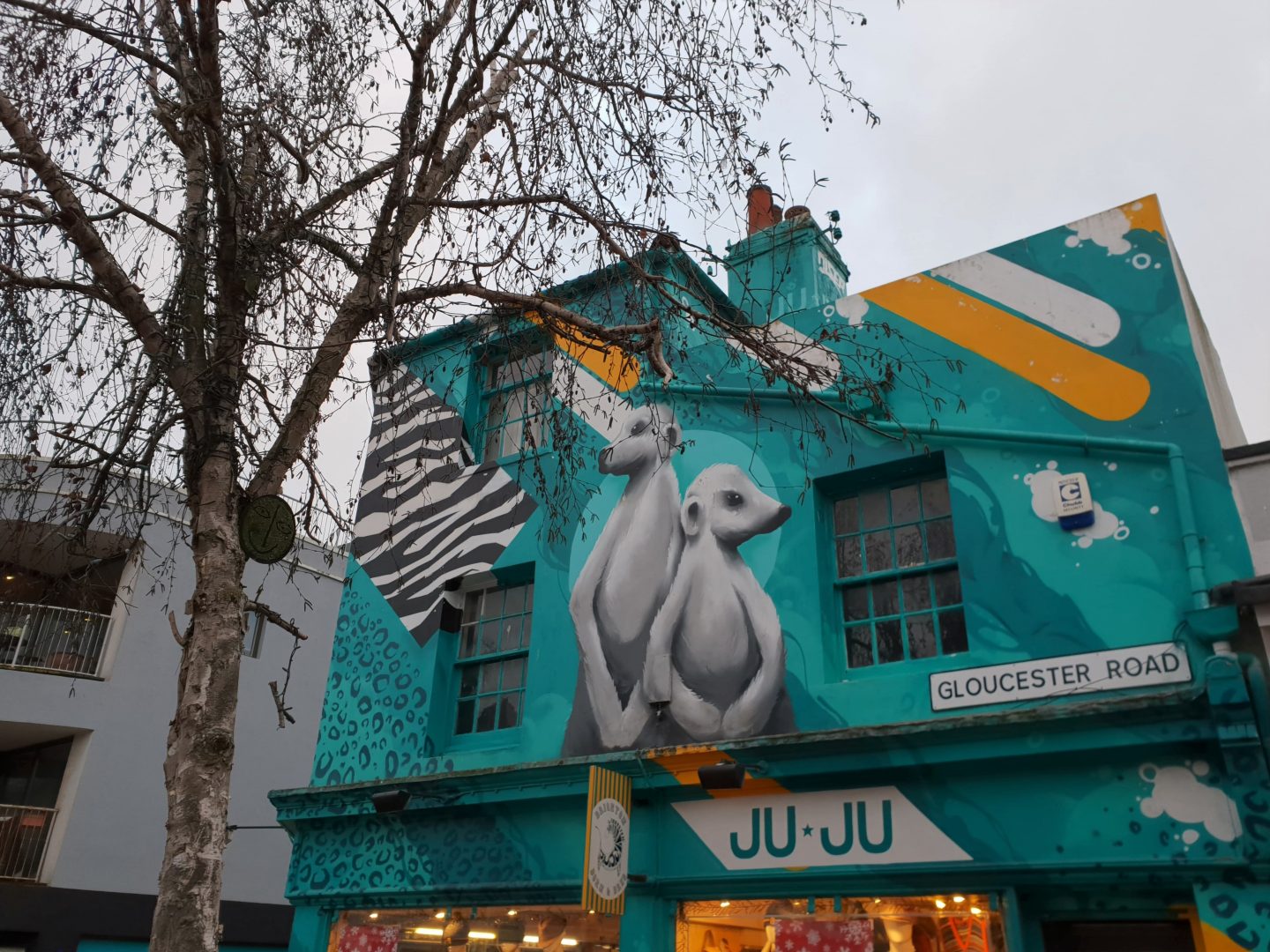 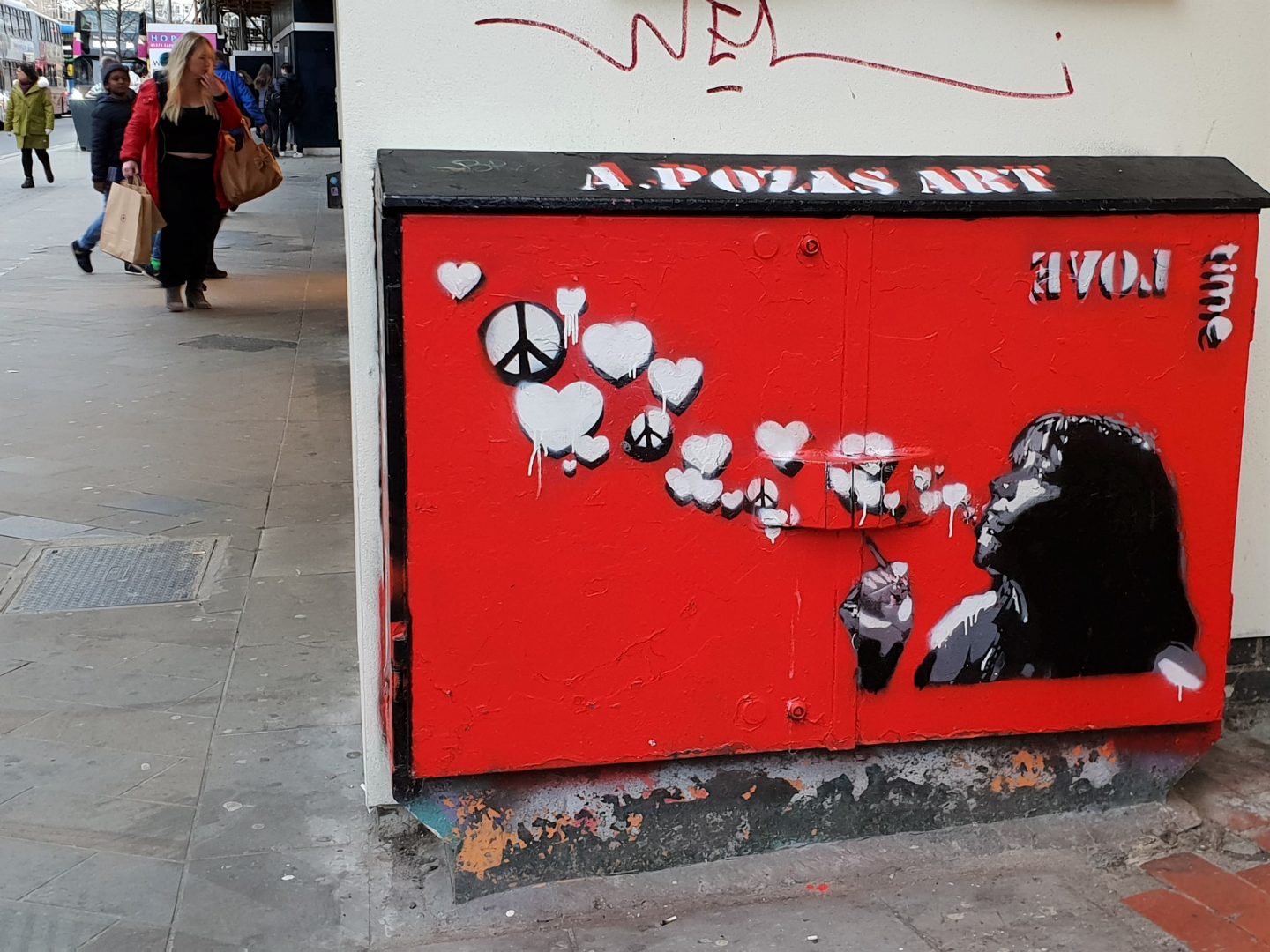 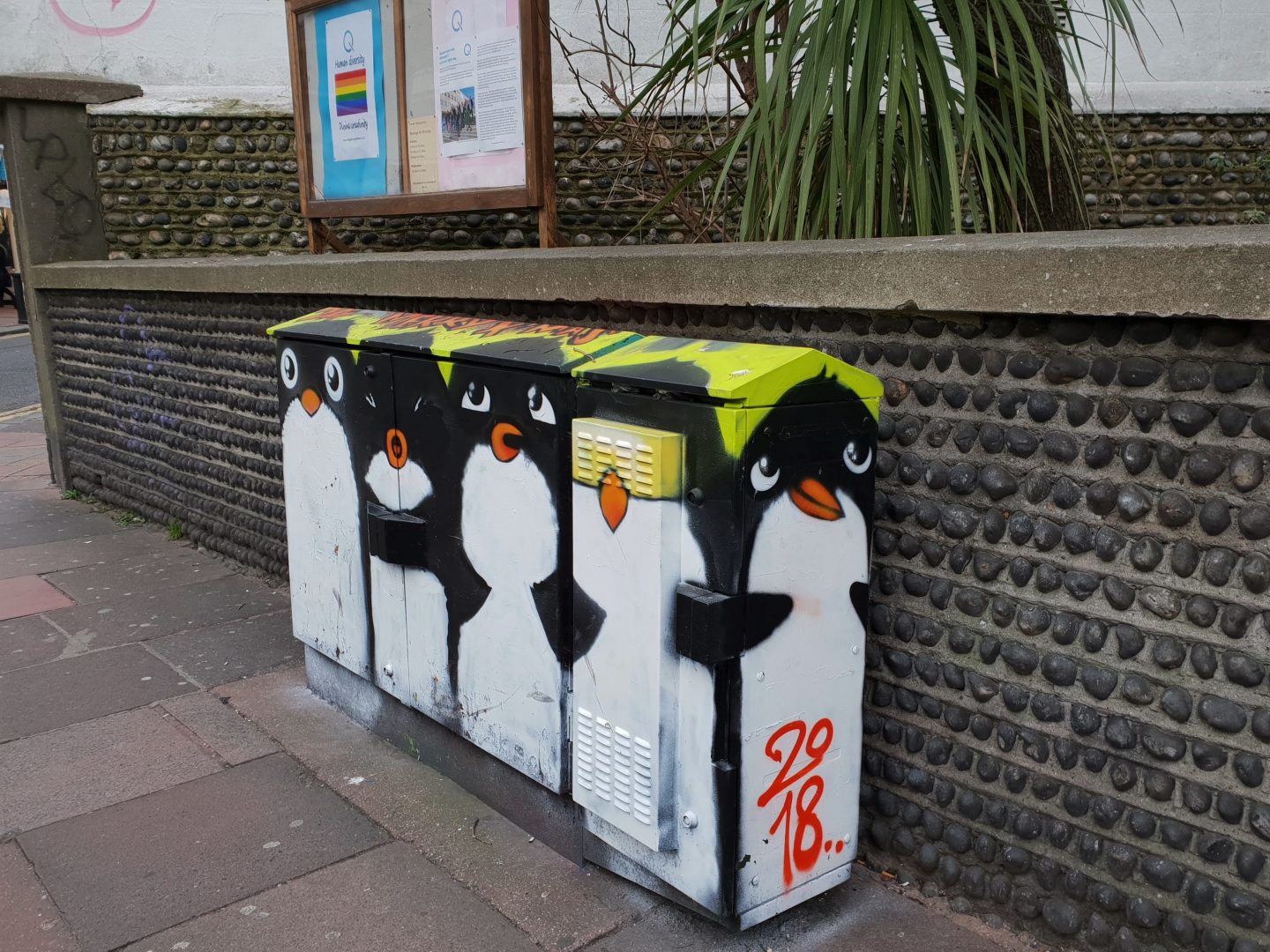 When we left Oliver’s, it was almost completely dark. We decided to make our way back towards the pier for the last part of our day out. We enjoyed a walk along it and were quite surprised by just how busy it was on a January weekday at rush hour! 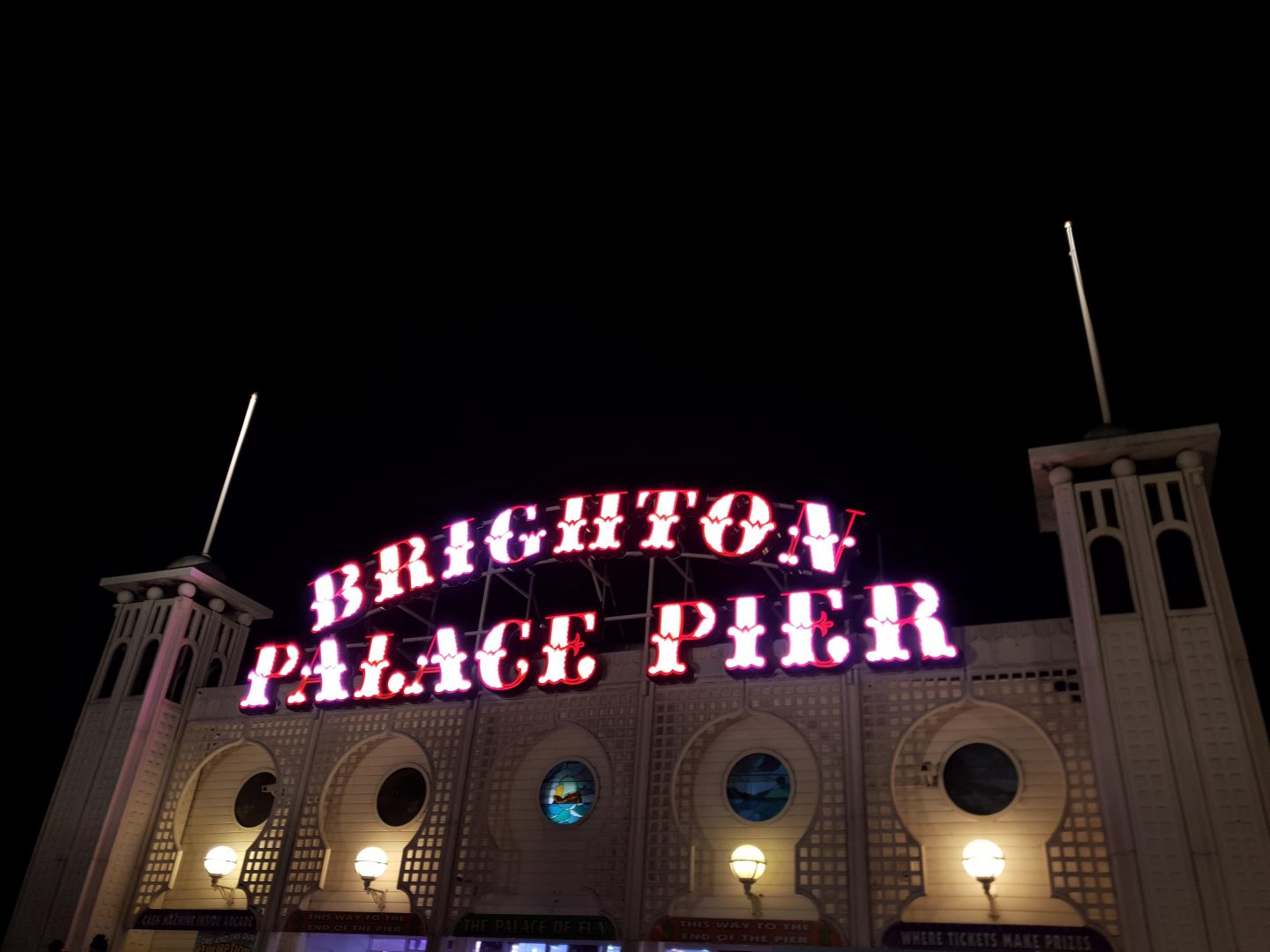 Autumn was fascinated by looking down through the slats, saying “Mummy! Water! Look Mummy, water!” At one point she even wanted me to help her into the water (which was obviously not going to happen!) It made walking along very slow though, as she kept stopping to look through. However, it was quite amusing! We spend so much of our time constantly rushing around onto the next thing and I started to almost rush her along even though I didn’t need to. I caught myself, reminded myself that there was no rush and just enjoyed her funny little 2 year old ways and fascination.

Before we left, she had a ride on the Hello Kitty car, which she adored. She hardly stopped smiling and waving, bless her. 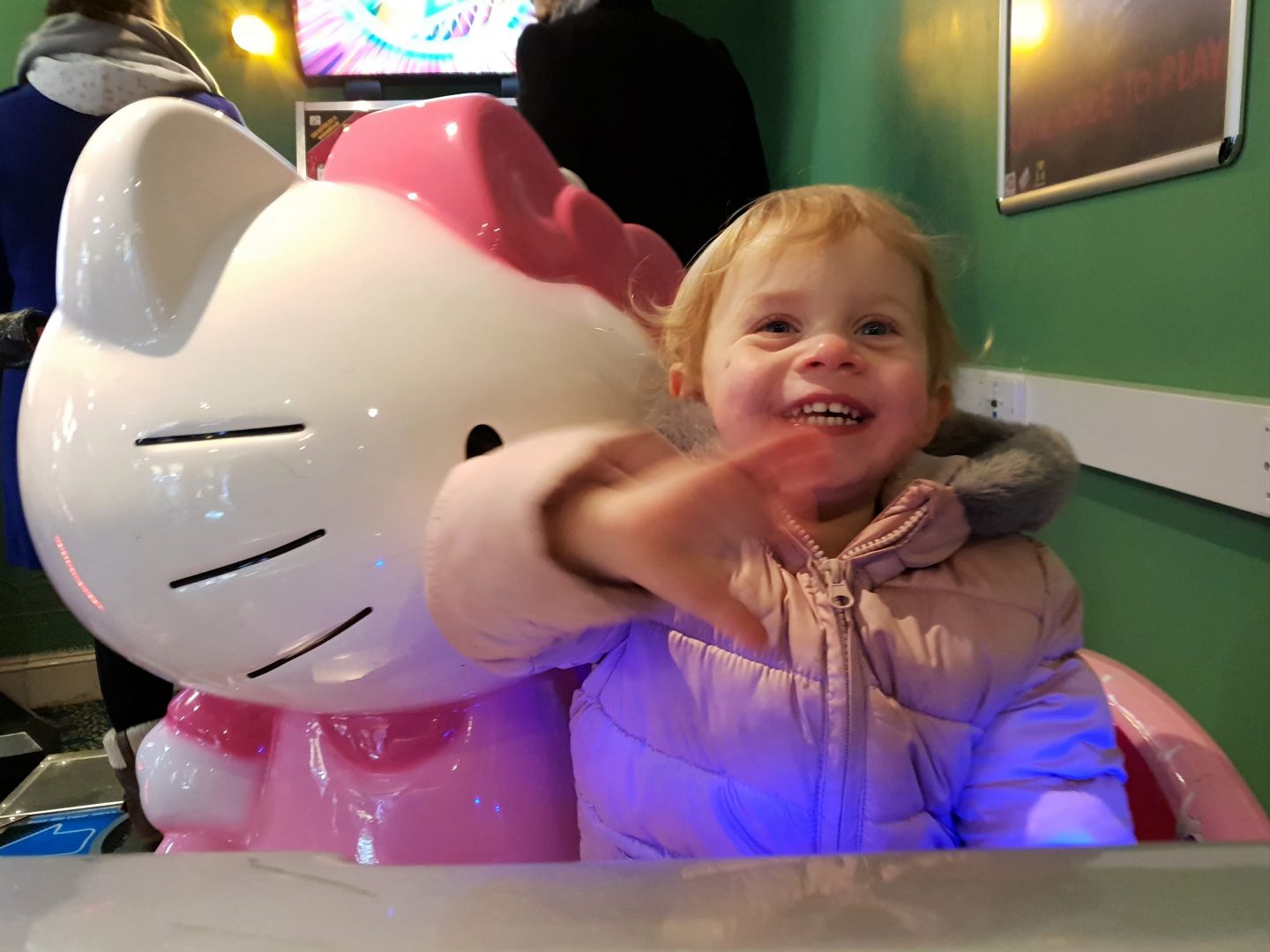 I had a lovely belated birthday day out – and it just goes to show that the seaside isn’t just for the summer!

Have you been to Brighton? If so, what were your highlights?

8 thoughts on “Celebrating my 27th Birthday in Brighton”