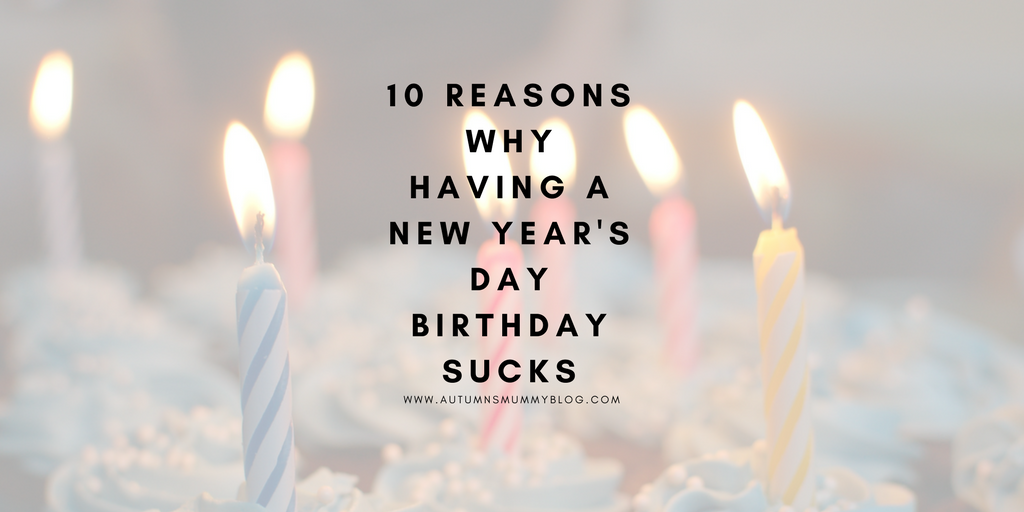 Happy New Year everyone, I hope it’s a prosperous and healthy one for you!

Today is my Birthday and I’m not always too happy about that. For many reasons, it actually kinda sucks, and here’s why:

1st January is exactly a week after Christmas. As such, everyone is tired of parties and spending time with people. It would appear that people generally just want to be a bit anti-social and focus on healthy eating or exercise for the first week of January.

Nobody has any money as they’re all skint from buying Christmas presents. This results in people not being able to celebrate with you. You also probably receive less for your birthday than people do if they were born at other times of the year. Speaking of which…

While many people take the opportunity to make New Year’s Resolutions, many people hate New Year. If you look at it pessimistically, you may wonder what bad things the year ahead will hold. If you feel like this your birthday will suck. Likewise, if you’re surrounded by people who feel like this, your birthday will suck. Let’s face it, you want people to be happy and celebrating with you. It sucks if you’re surrounded by miserable people!

I’ve been told so many times that I’m so lucky to have a New Year’s birthday. “Aww, you’re a New Year’s day baby?” I’ve heard so many times too. How is it lucky to be born on such a rubbish day of the year? Although, if you look back at old music videos amongst other things, you always know what age you were in a certain year as you were the same age all year!

Growing up, people the same age as me always thought I was a lot younger than them just because I was born in a different year. Being so petite probably didn’t help either! I remember going to the shop on my 18th birthday to buy some alcohol. Looking at my ID, the woman behind the counter refused me. I had to remind her that it was New Year’s day and to do the maths. “Oh yeah”, she giggled dopily.

This could be a good thing in the future, though! It doesn’t bother me as much now I’m getting older, but as a child it felt really irritating.

Because people have been celebrating New Year’s Eve the night before, everyone is hungover on your birthday. Nobody’s awake until late either, as they’ve stayed up so late. This makes it feel like your birthday is shorter.

On a side note, if people are not hungover, they might be ill as 1st January is in the middle of cold and flu season. I spent my 21st birthday feeling rubbish. My 17th birthday sucked because my boyfriend (now husband) got a sickness bug.

It’s difficult to arrange anything for your birthday, because nobody’s around. People are away on holiday or still elsewhere in the country with family. Either that, or they make up excuses because they have no money and can’t afford to go out somewhere with you, which leads me onto my next point…

It’s difficult to find anywhere to go and celebrate your birthday. Almost everywhere is closed and anywhere that isn’t is often packed. I considered going to a board game cafe for my birthday this year. Of course, it’s closed until the following day. That said, pubs are often almost completely empty as nobody can face the thought of alcohol again!

As if everything else wasn’t bad enough, it’s the middle of winter. As such, it’s always freezing, grey and raining. Yay.

So…I think I might reschedule my birthday to the summer next year!

P.s. It’s not your fault, Mum. I should have baked for another 3 weeks like I was supposed to!

PSST…check out this post for inspiration on how to celebrate your New Year’s Day birthday! 🙂