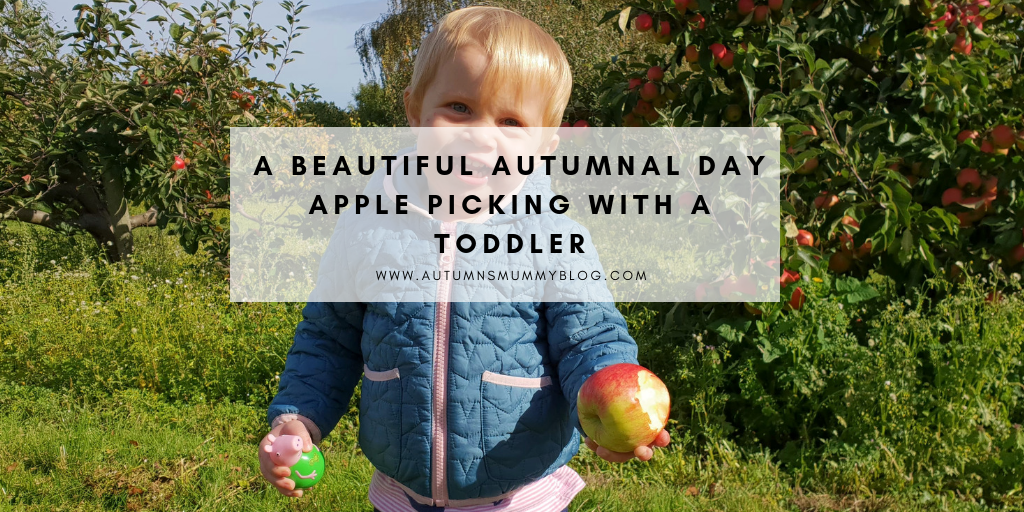 Now that we’re well into October, it won’t be long before the barrage of pumpkin patch photos start flooding social media. Our local pick your own opens tomorrow and I can’t wait. We’ll likely be making a visit, just as we did last year and the year before. However, last weekend we went out to pick something much sweeter! Autumn loves apples, so we thought we’d take her to an orchard to see where they’re grown and pick some too.

I apologise for the portrait pictures in this post, I know they look better in landscape on the blog! However, I wasn’t actually planning on writing about this day out. They were just going to be for my personal collection, but we had so much fun I just had to write about it! We’d never been apple picking before, but I would really recommend it as a lovely autumnal activity, especially on a sunny day.

Learning where apples come from

Arrival at the farm

When we got out of the car at Foxendown Fruit Farm in Meopham, Kent, the first thing Autumn spotted was the puddles! We’d had torrential rain the day before, so I was prepared and had fortunately put her in wellies. She loves jumping in puddles, just like her favourite TV character, Peppa Pig! If you’ve been following us on the blog or social media, you’ll probably know that Autumn is a bit obsessed with her at the moment. Her 2nd birthday party 3 weeks ago was Peppa Pig themed. You’ll notice from the photos in this post that she actually brought her George pig weeble out apple picking with us! Anyway, I digress…

After a minute or so of splashing, we spotted the owner of the farm who was sourcing some buckets for us. Autumn was a bit grumpy with me for taking her away from the puddle. However, her interested was piqued when I asked her “Shall we go and pick some apples from the trees?”

The importance of learning where food comes from

I’ve seen reports in the media in recent years that show a lot of today’s children don’t know where foods come from. I find this alarming and I don’t want Autumn to be one of those statistics. As such, I’m keen to teach her where different foods come from from an early age. As soon as we got to the trees, she recognised that there were apples growing on them. She was very excitable! She knew just what to do, too, choosing an apple and picking it straight away.

As soon as she’d picked her first apple, Autumn said “Apple!” and bit into it. “Yummy!” she declared, grinning. As we picked our first few apples, she insisted on taking a bite out of each one as she put them into the bucket. 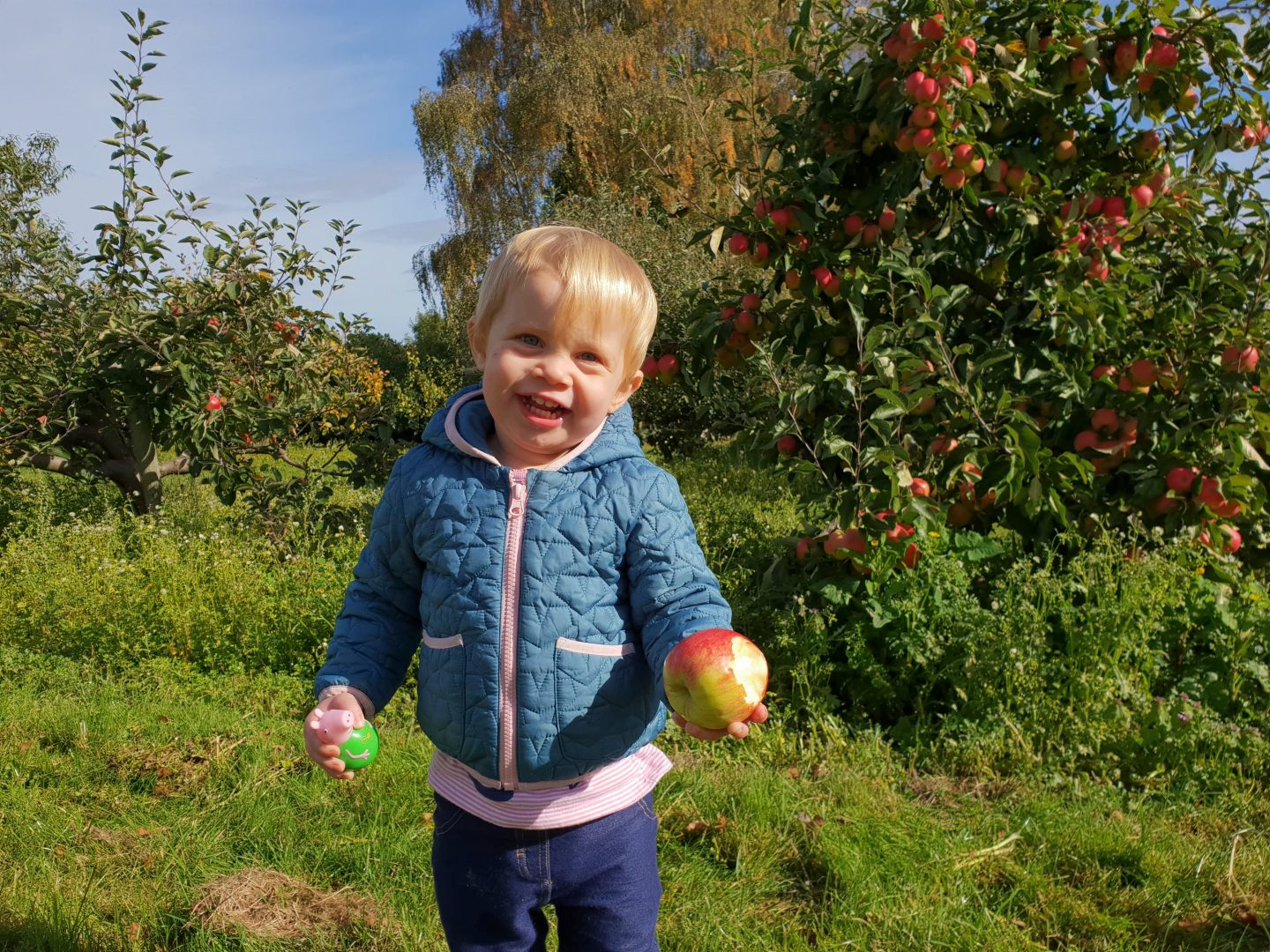 The first type of apple we picked was a variety called Falstaff. They’re sweet with a delicious tang and are lovely straight from the tree.

As you can see, Autumn was very excited about this! 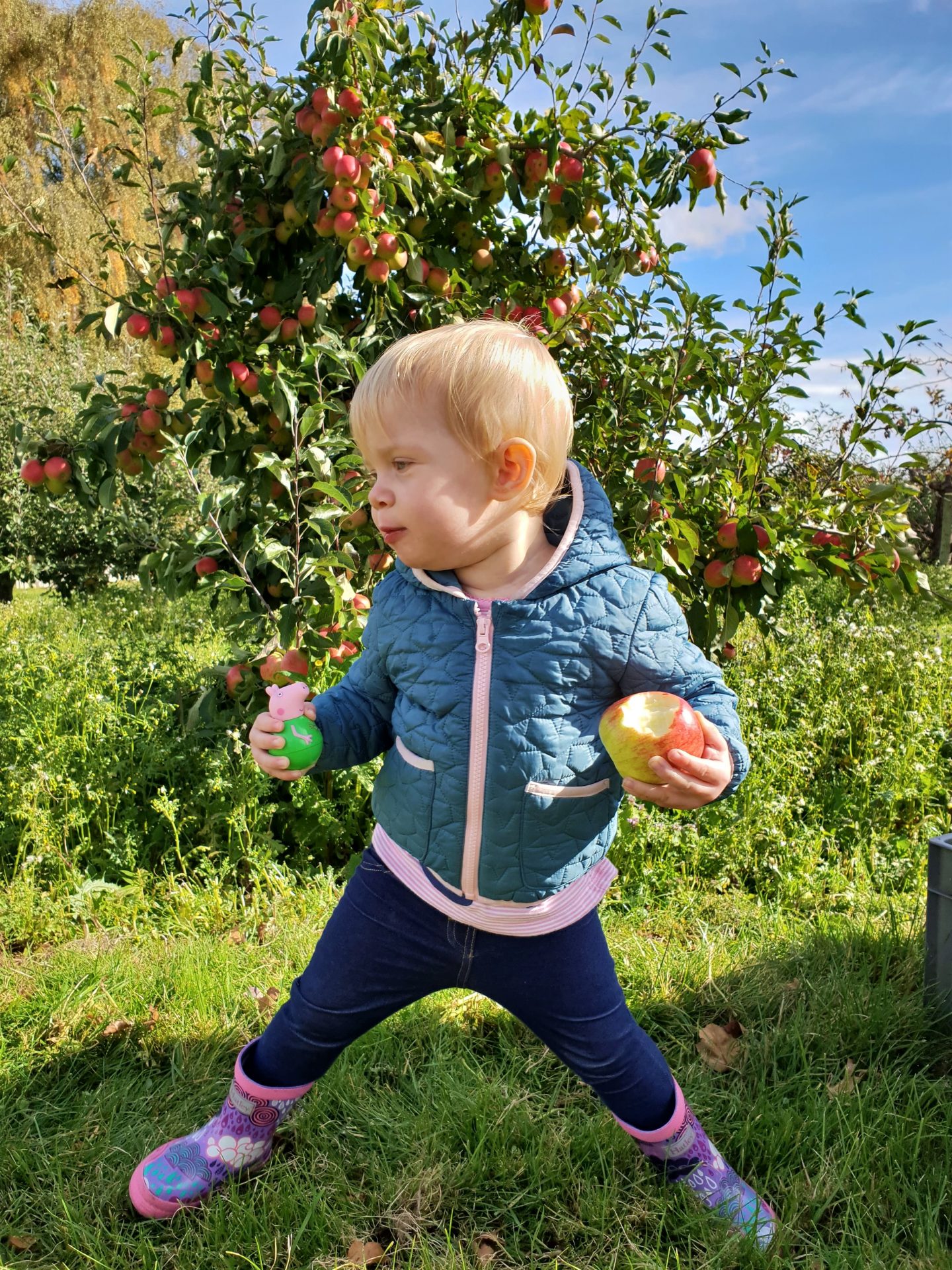 Before long, Autumn was really getting into helping my husband pick apples and putting them into the bucket. I decided to go across four rows to pick some Cox apples. When I got back they had picked absolutely loads of apples between them, despite it only being a couple of minutes! I was confused about why Dave had picked so many and wondering quite what to do with them all. We had to take them…it’s not like you can just put them back on the tree!

Autumn didn’t mind though. She was jumping around excitedly and randomly selecting apples for taste testing! 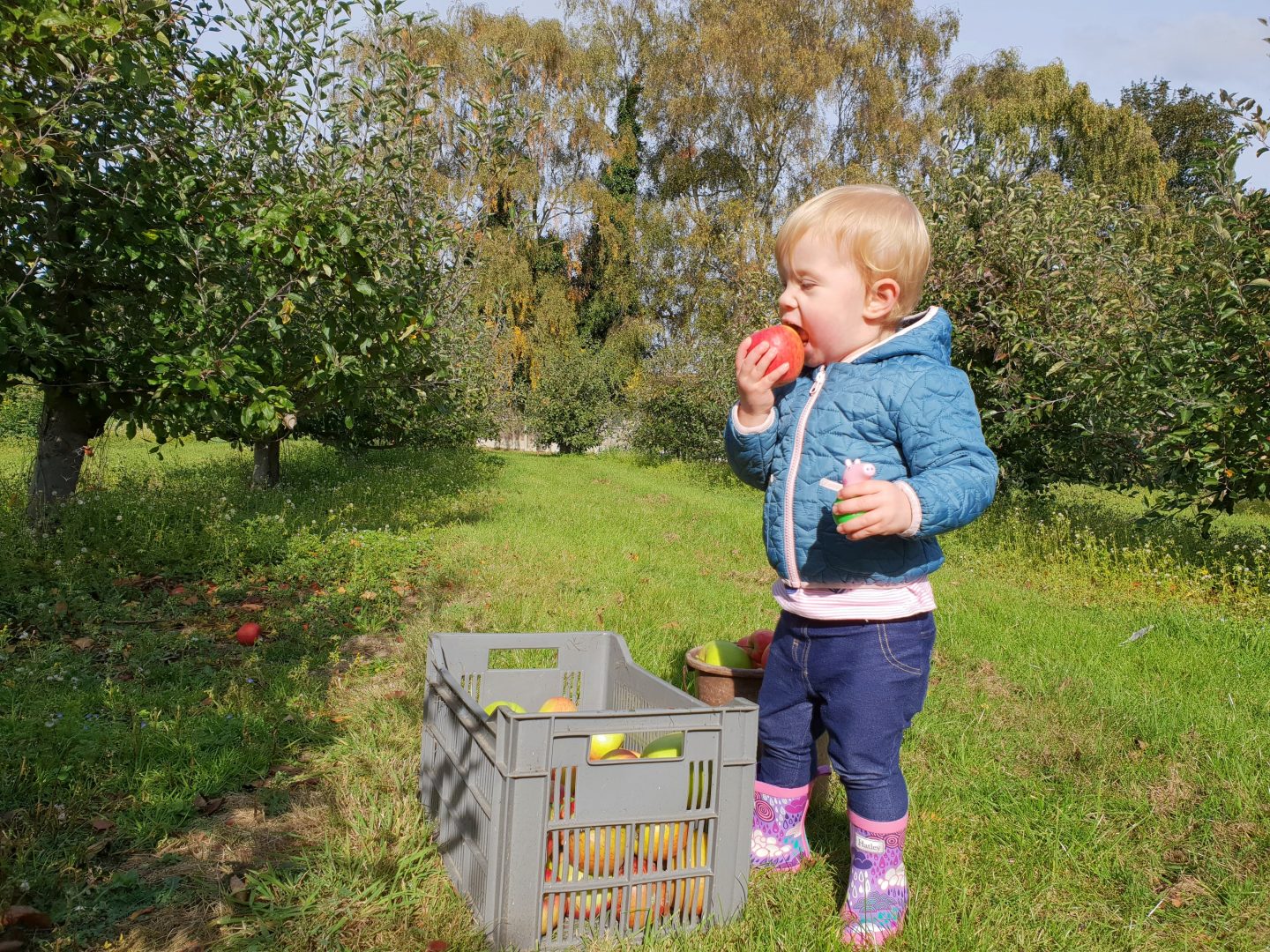 After selecting a few apples of other varieties, it was time to to to weigh and pay! Dave took the crate, while Autumn insisted on carrying or pulling the bucket. 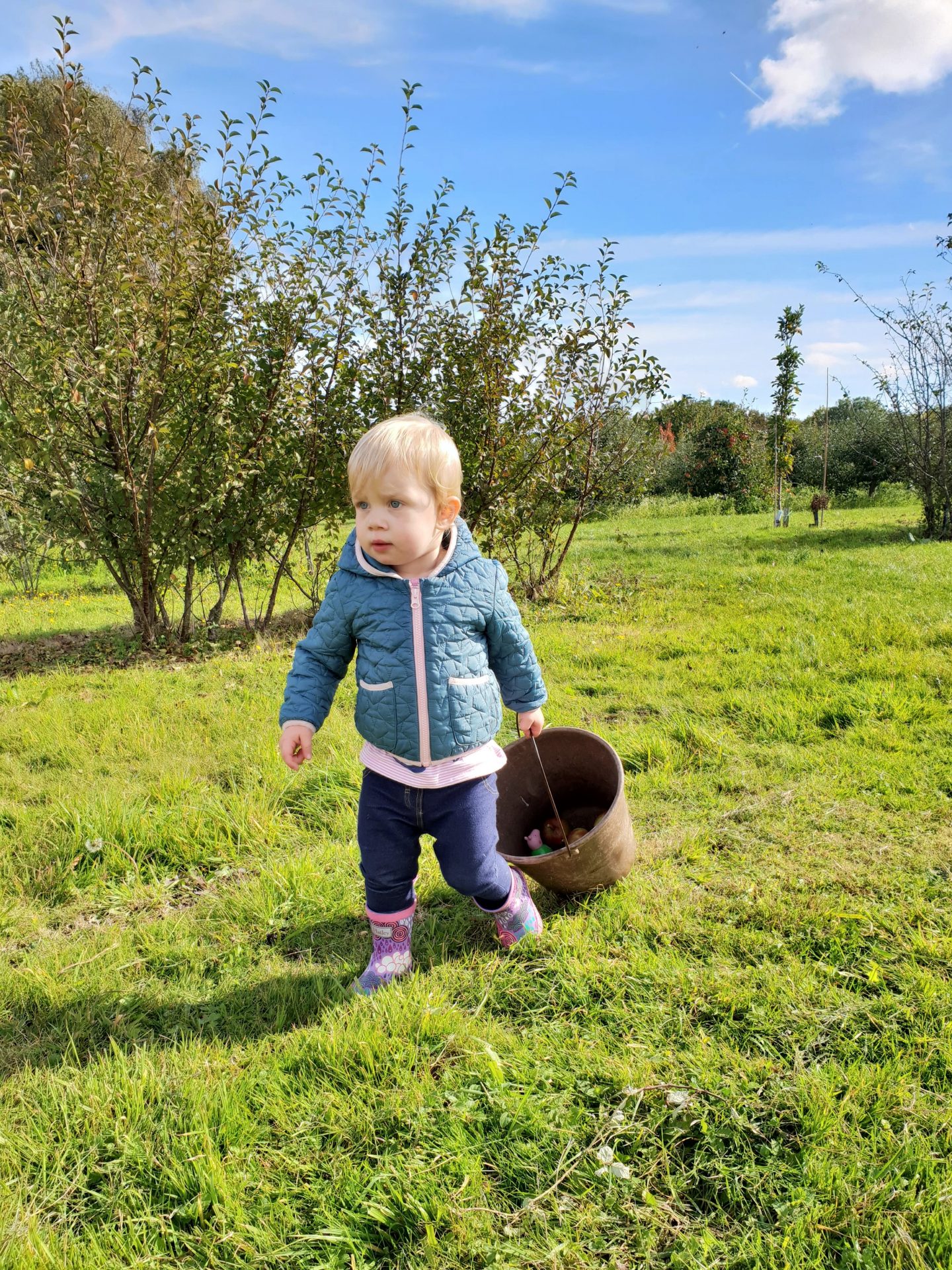 George pig even hitched a ride! 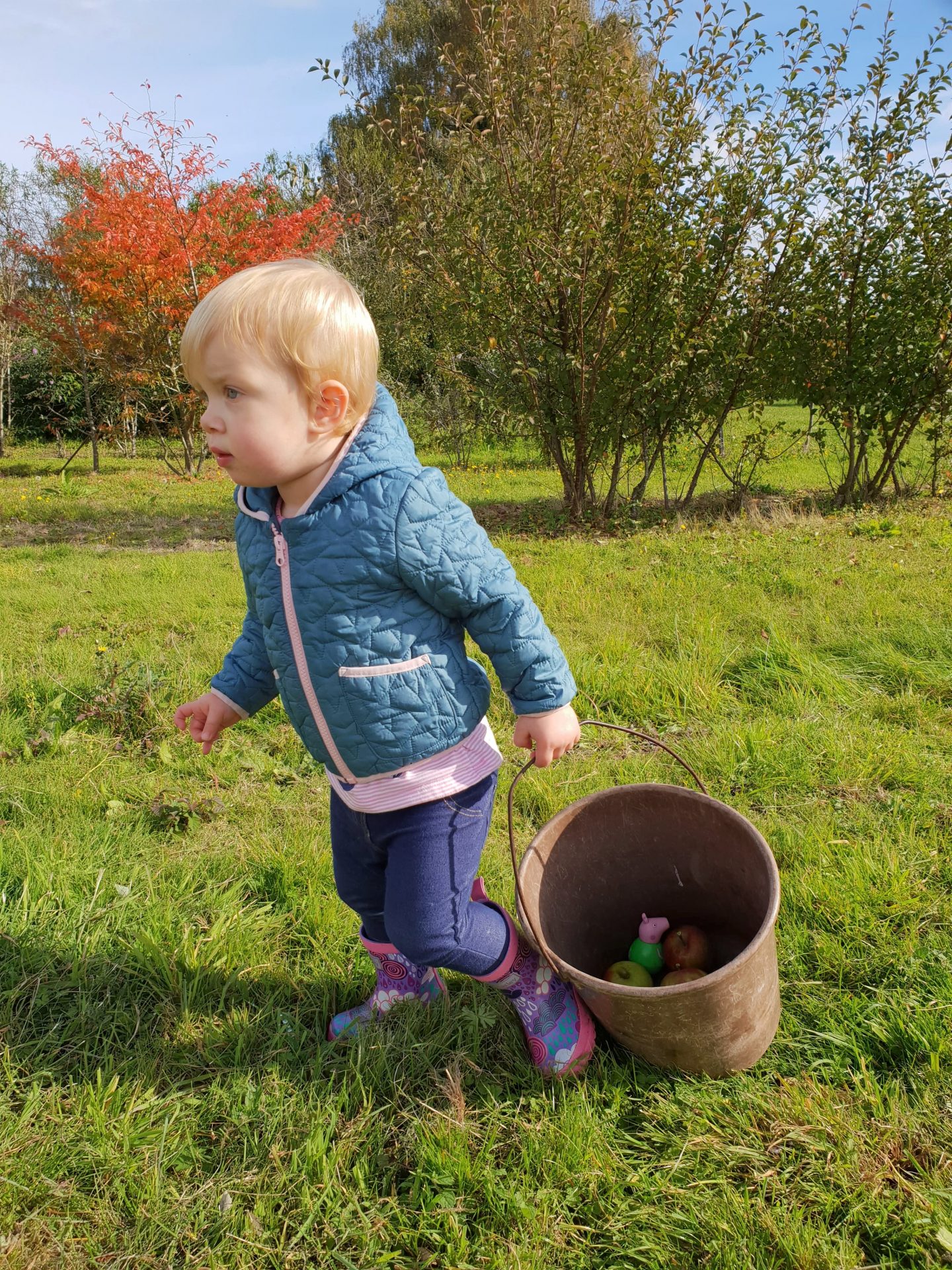 We also visited Broomfield Farm’s shop to see what vegetables they had. We picked up a butternut squash, which Autumn insisted was her baby! She cried when we took it off of her to put her in the car. 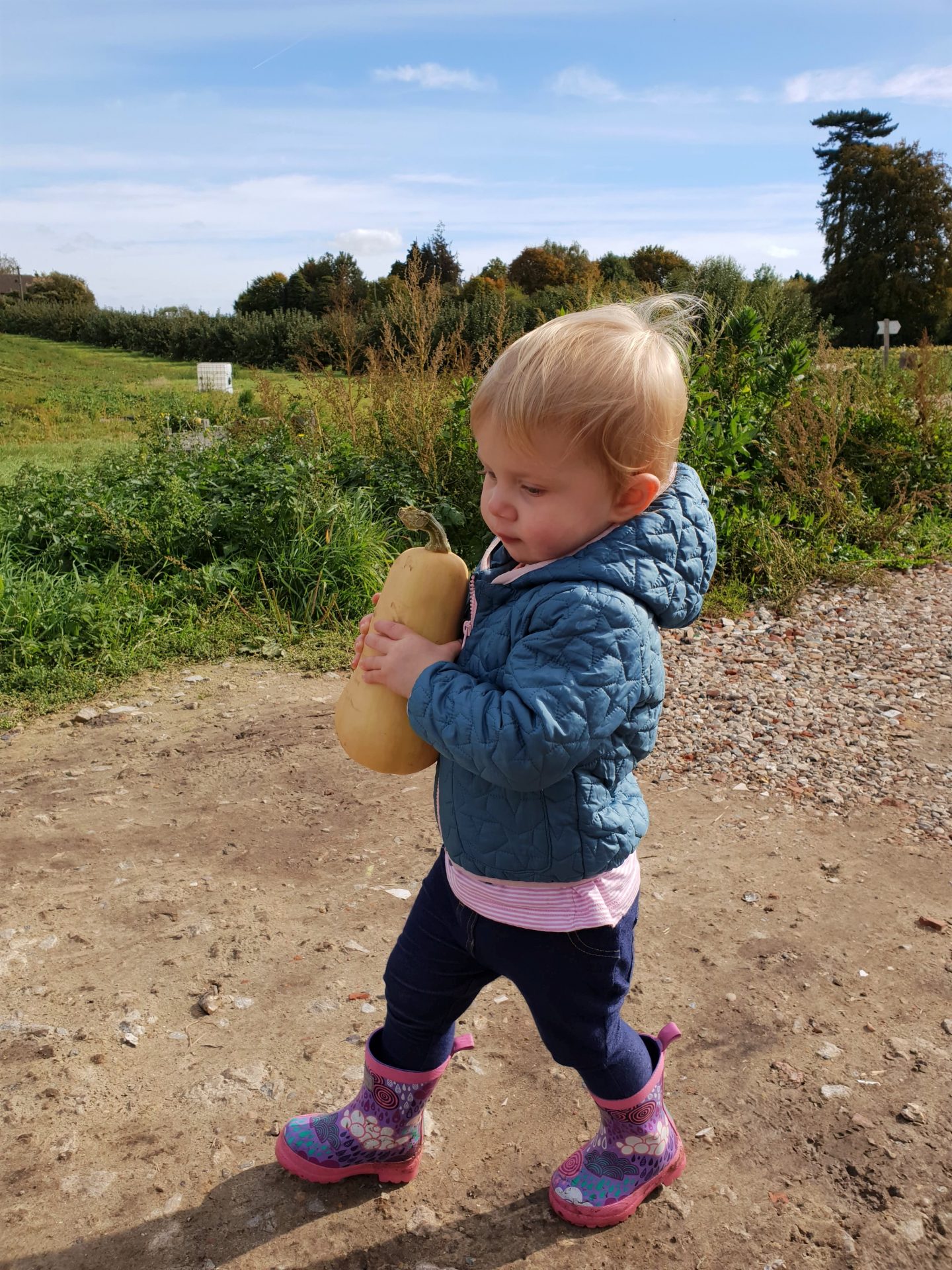 We had such a lovely time in the sunshine and Autumn really enjoyed it. We’ll definitely be going apple picking again in the years to come!