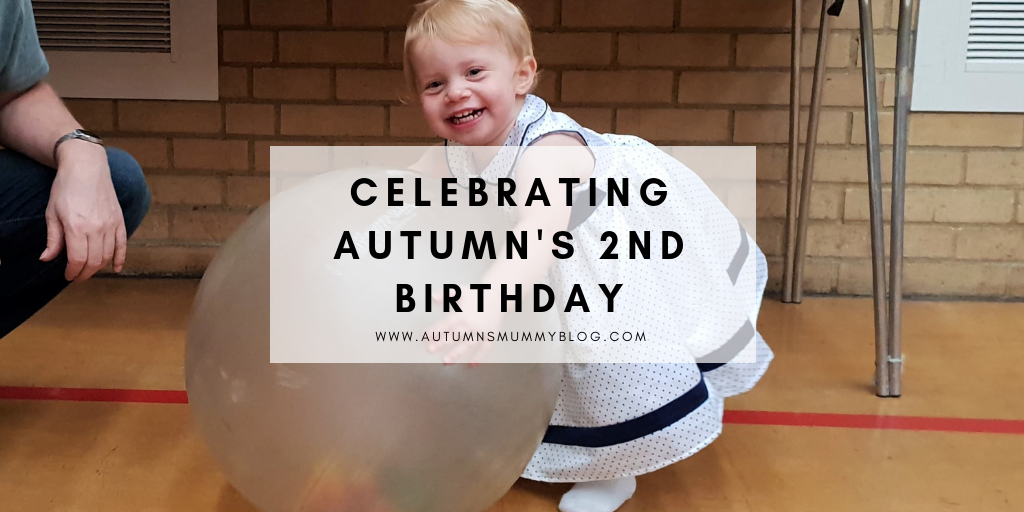 The weekend before last, Autumn turned 2 years old! We weren’t sure what to do for her birthday, but wanted to make it a special day to remember. We considered taking her to a zoo as she loves animals, but as we’ve been to Howletts, Drusillas Park and Folly Farm over the last few months we felt that we’d exhausted that avenue for a while! Pooling together ideas, we thought about what Autumn likes best: Family and friends, running around, Peppa Pig and soft play!

Autumn woke up as though it was any other day, asking to come out of her cot. Usually, she’d come straight downstairs with us for breakfast. However, as it was her birthday, we thought we’d start with some presents! As soon as she saw the Peppa Pig wrapping paper on her gifts she got incredibly excited and started shouting “PEPPA PIG!”

She was very good and played with each item after unwrapping it. Before long, it was time to have breakfast, get ready and put everything in the car ready to take to her birthday party!

As Autumn is so obsessed with Peppa Pig at the moment, it was really the only theme we could have chosen for her! I printed Peppa Pig party invitations off of the internet and filled them out before posting them to Autumn’s friends. Meanwhile, Dave found the banner, plates and napkins while we were in Manchester for Blog On Toys! 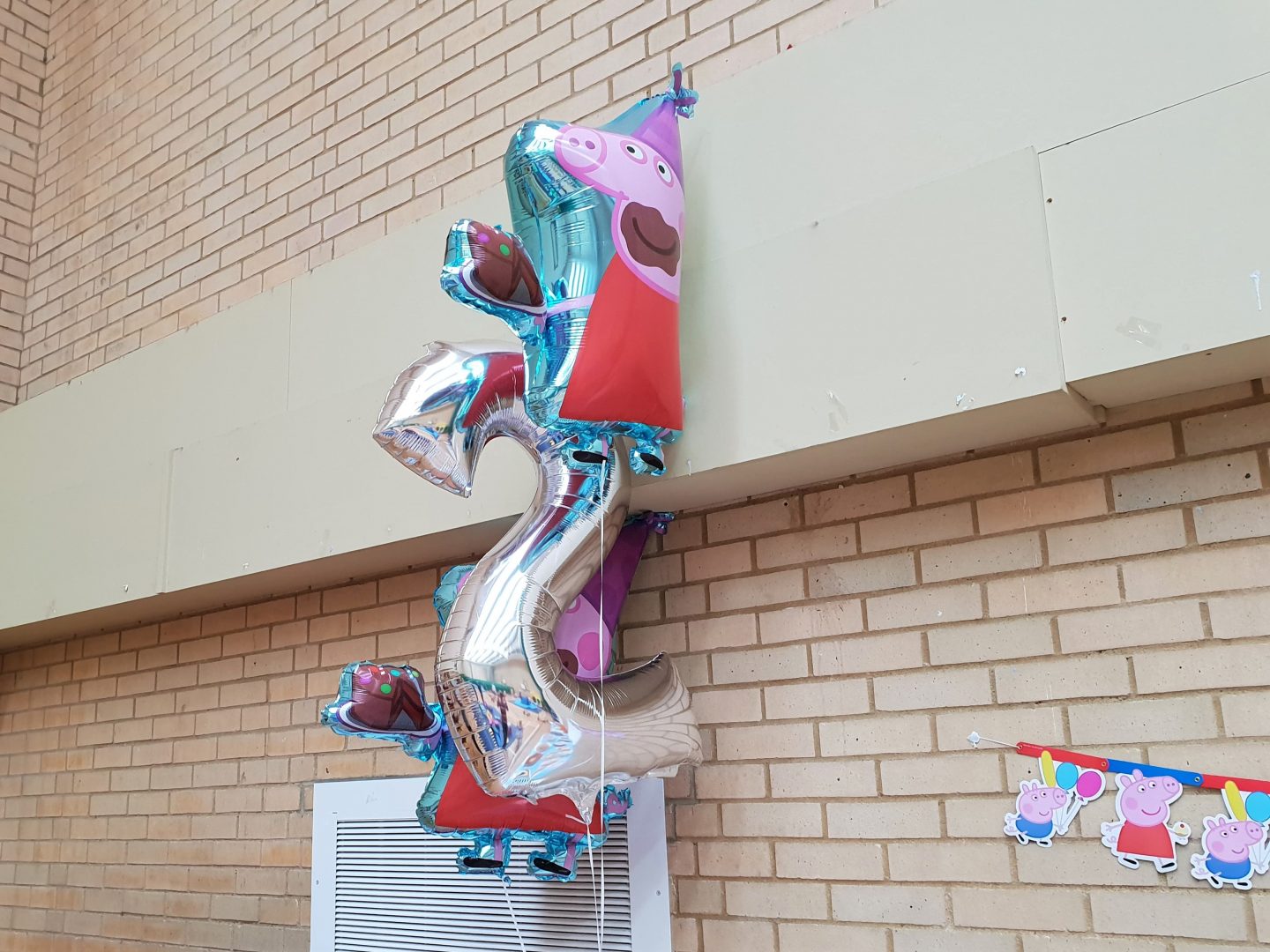 Unfortunately, I didn’t have time to make my own cake this year or the money to pay for someone to make one for me. As such, we bought a Peppa Pig cake from Sainsbury’s. Autumn didn’t know the difference, of course, and she absolutely loved it!

We hired half a hall at Strood Sports Centre for 2 hours, where they also provide soft play. If you’re local, I’d definitely recommend it for an under 5’s party. There was an assortment of soft play cushions, soft play steps, trikes and scooters, a slide, seesaws, balls and a bouncy castle! 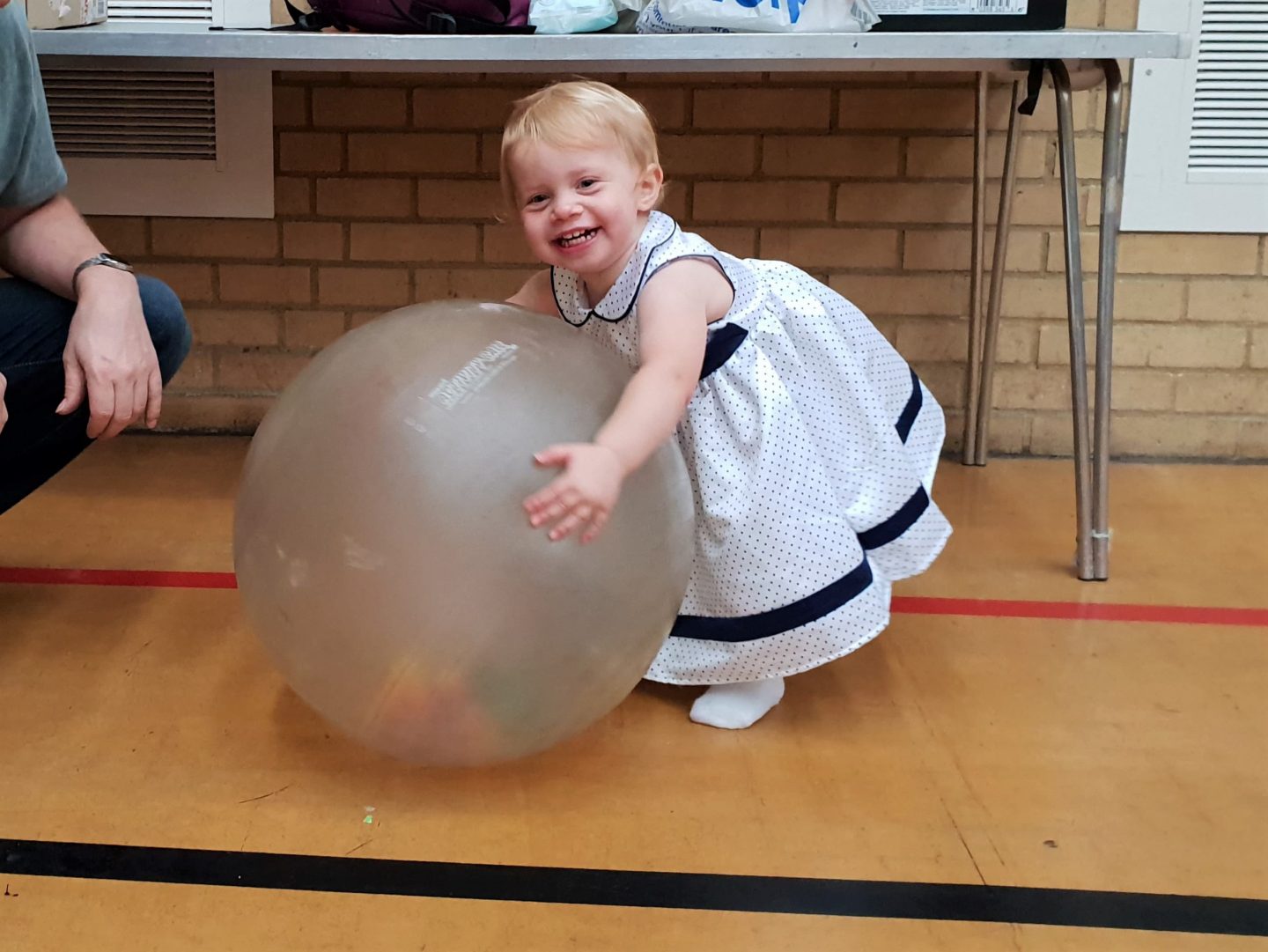 As such, there were more than enough things to keep the children entertained. 7 children attended in total, which was a nice number. As the children ranged from 10 months to 2 and a half years, it wasn’t too overwhelming for them. They all seemed to have a whale of a time! Autumn spent much of her time in the car 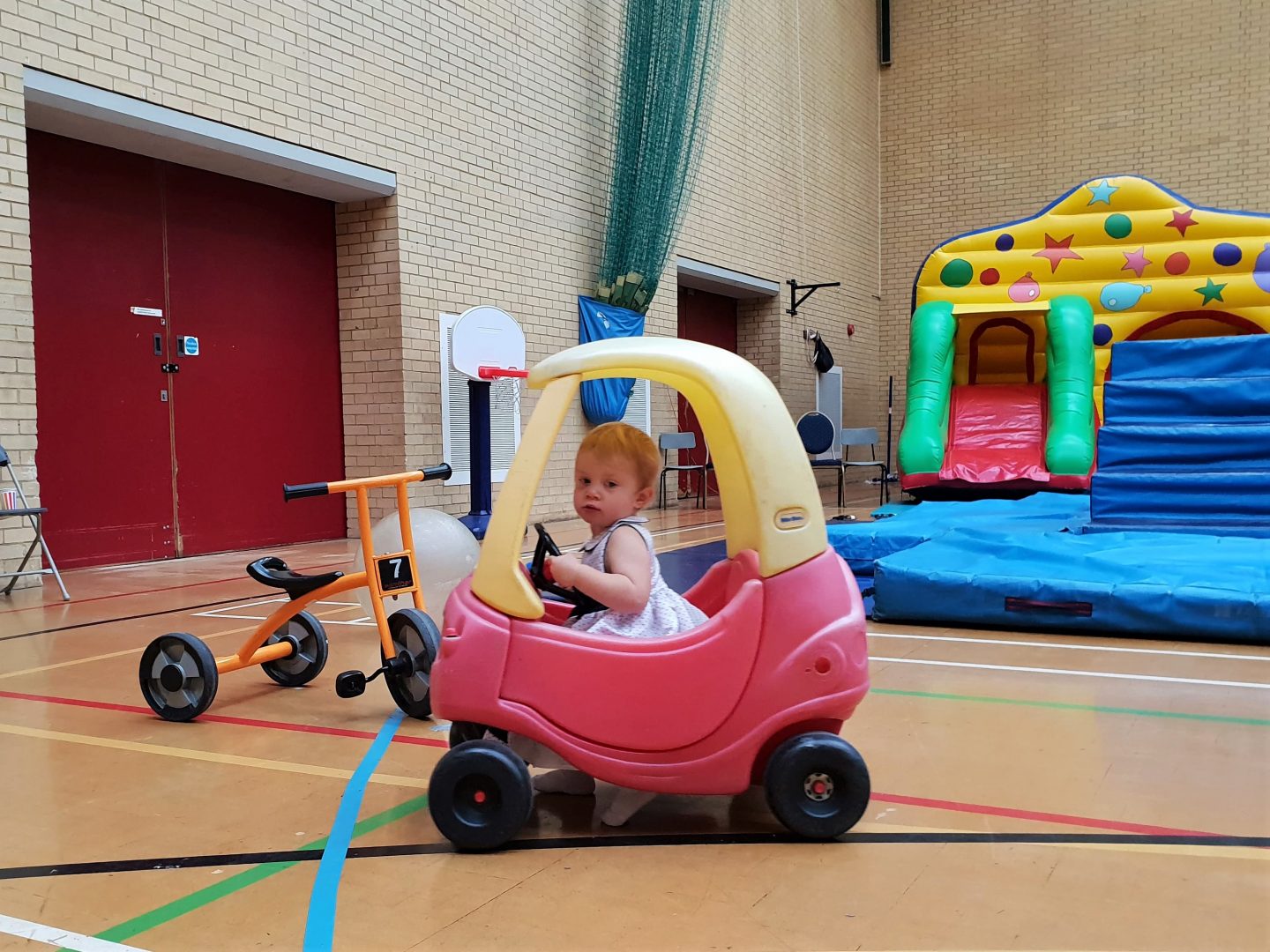 I put Autumn together a plate of food. She brought the car over excitedly and looked at the plate of food, carefully choosing a biscuit. After one little nibble it was discarded and she was off to play again! 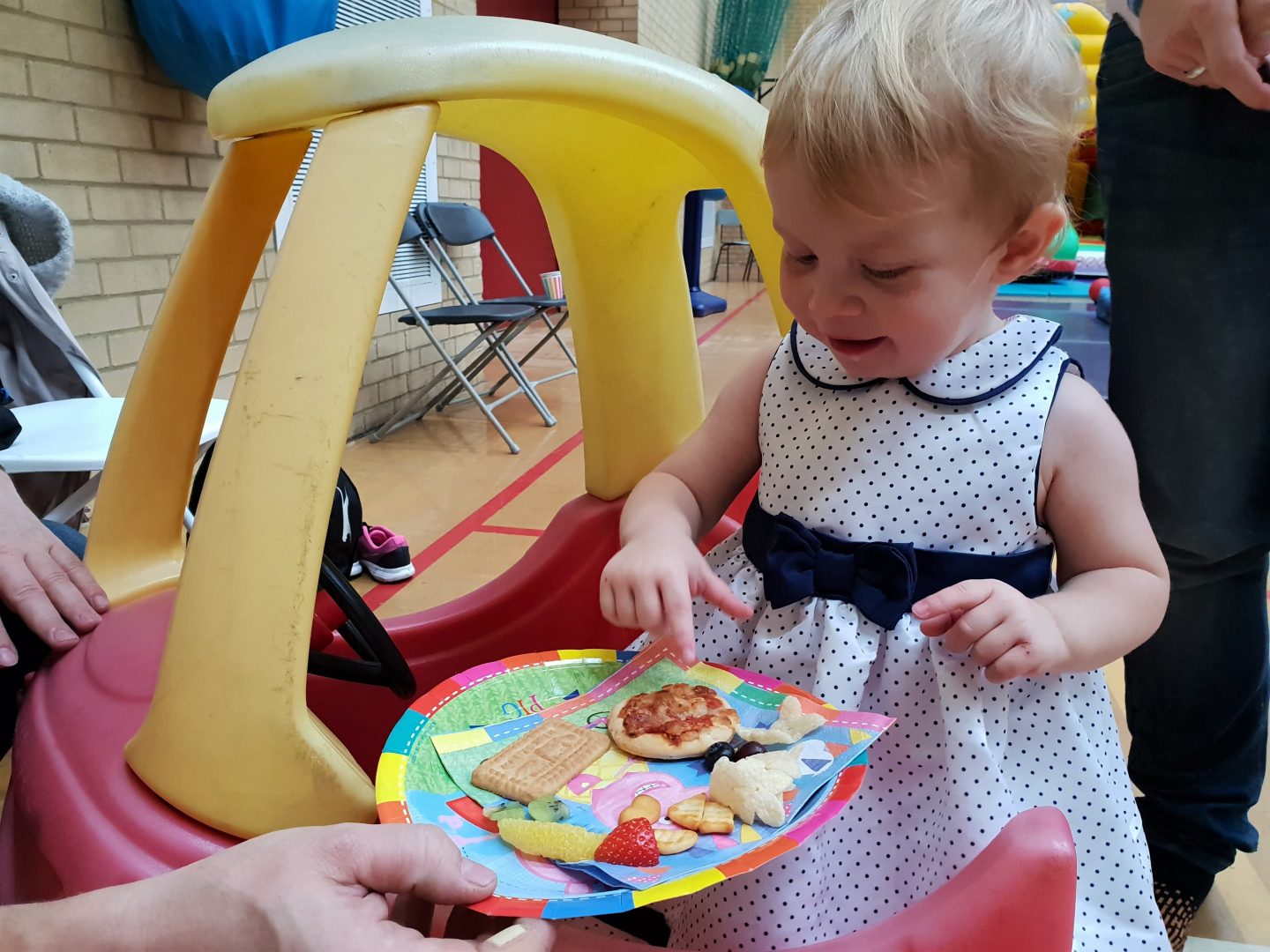 Speaking of food, we opted for the usual children-friendly party food, making sure there was enough for parents too! 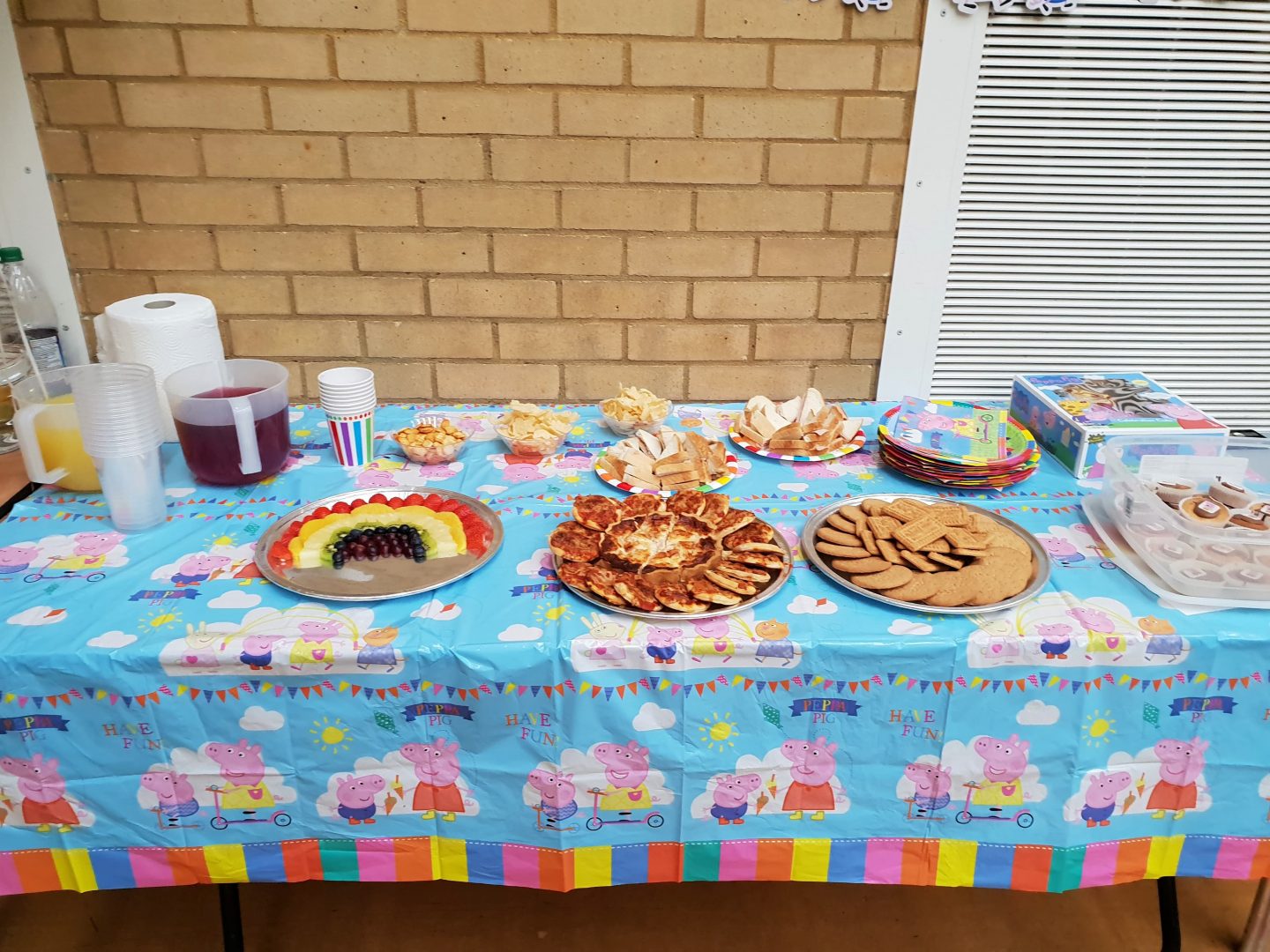 Keen to make sure there were healthy things available, I made a fruit rainbow. 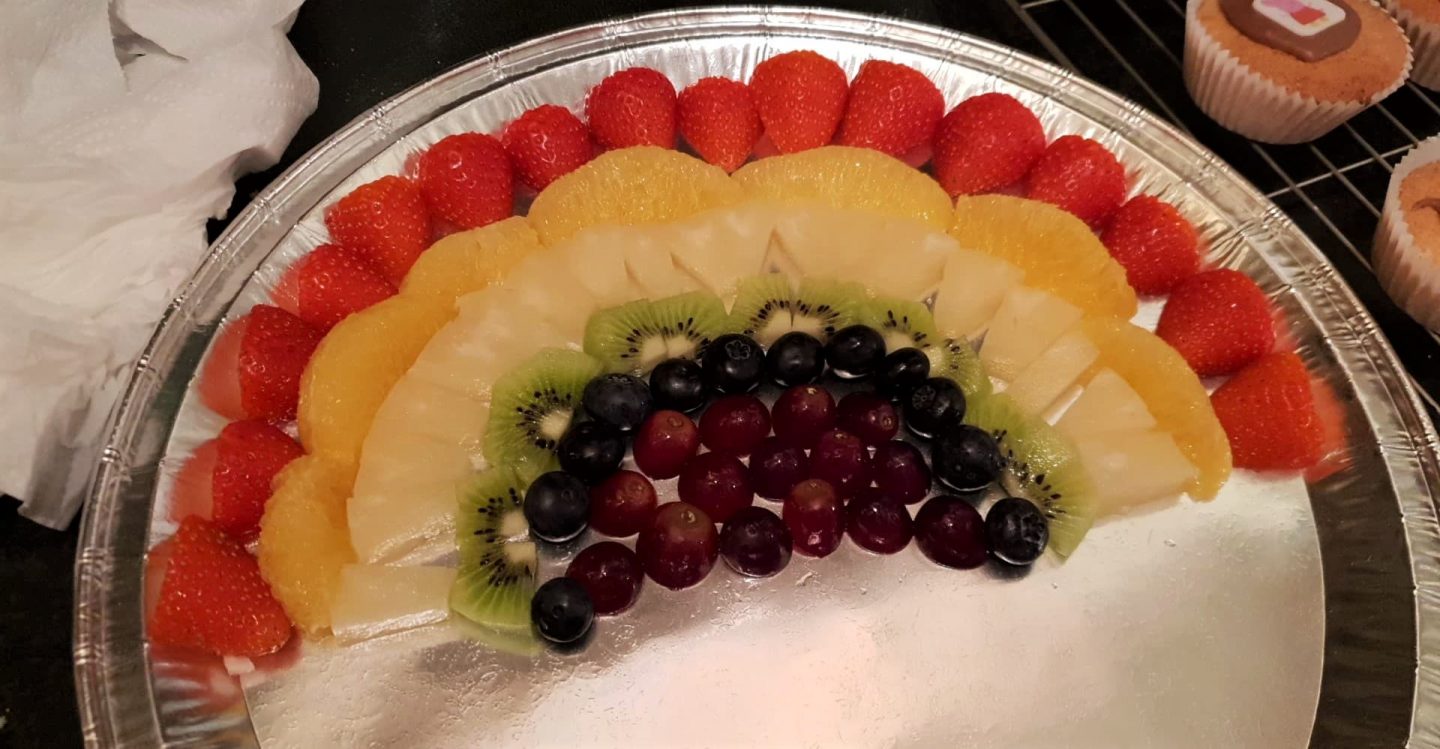 Autumn really must have been having so much fun, as she didn’t even stop for cheese savouries!

For the goody bags, I printed out some Peppa Pig pictures from online. I included crayons to colour them in, bubbles and a wooden toy pig. After we’d all sang happy birthday and Autumn had blown her candles out, (with a little help from me), I also popped in a slice of cake wrapped in a napkin.

All partied out, we took Autumn to my parents’ house where she opened many of her presents and played with them. One of her favourites was an ice cream stand from my brother! She grasped the concept very quickly, making ice creams for each of us. 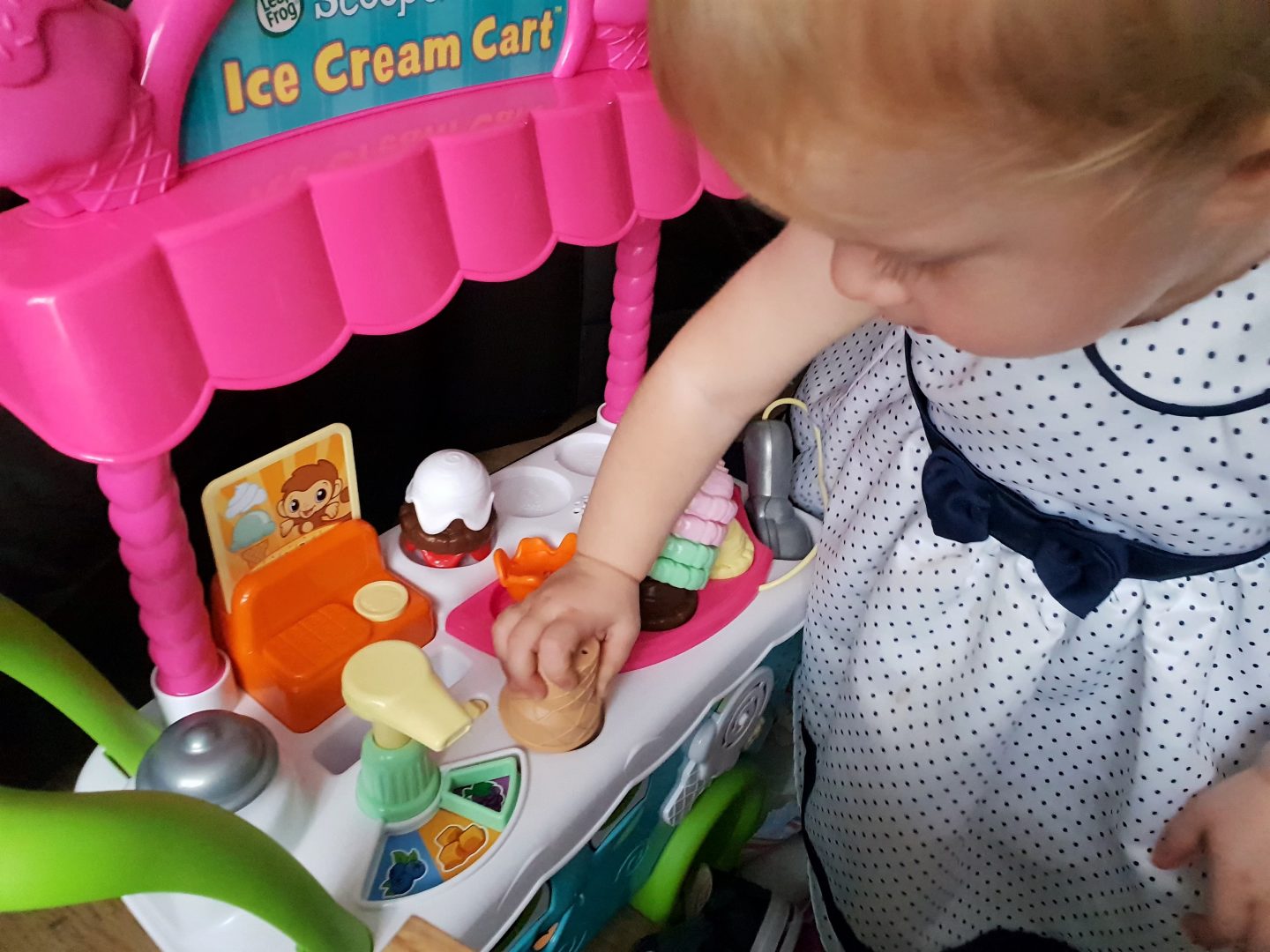 I’d sent a birthday card into CBeebies and they showed it, which was wonderful (although parts of it had fallen off in the post – oops!) I think Autumn understood it was for her when we got her to watch it. We had some more party food and ate some cake, before putting her down in the travel cot for a nap. Once she’d woken up, we also visited Autumn’s great uncle and great nana, then her other grandparents, auntie and uncle. The day ended with more presents, spaghetti bolognese and playing with her grandparents’ dogs! 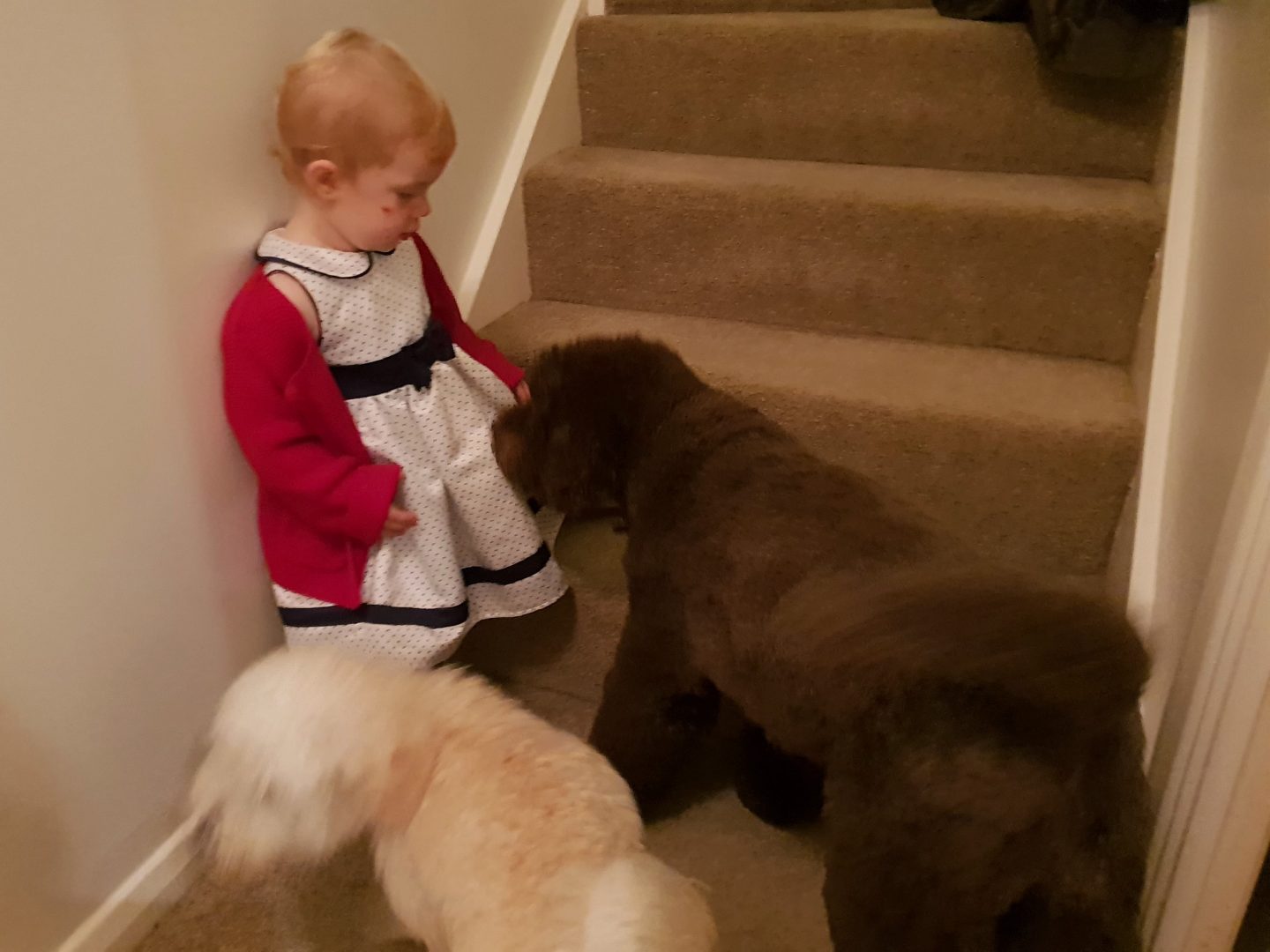 Although our plans were put together rather last-minute, I think Autumn had a brilliant day turning two! How did/are you planning on celebrating your little one’s second birthday?