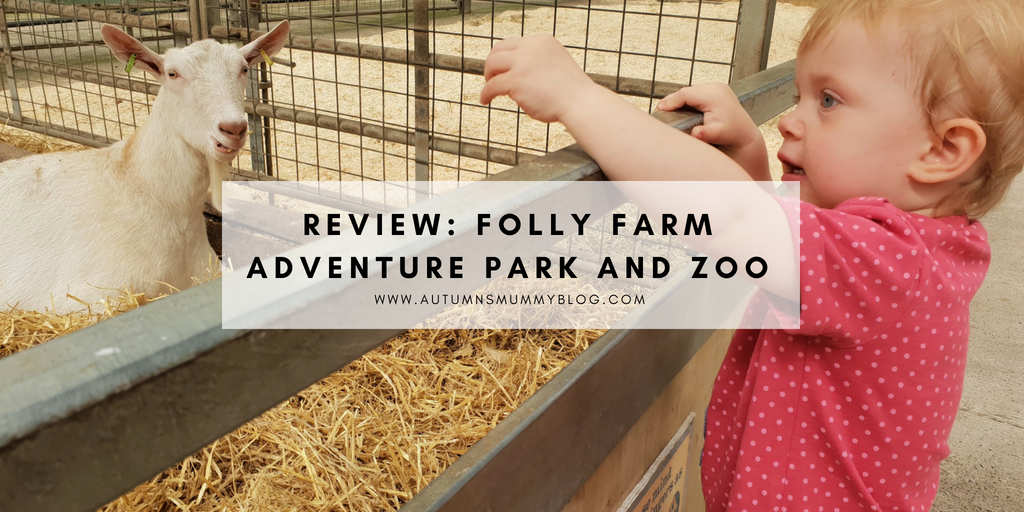 During our recent holiday to Pembrokeshire, we visited Folly Farm Adventure Park & Zoo near Tenby. We’d passed it several times on previous holidays and always been intrigued. However, when we visited with our toddler it managed to surpass our expectations! I didn’t realise just how much was there and how many animals they had.

The farm section of Folly Farm is undercover in a large barn and there are a wide range of animals. We started to work our way around clockwise, keen not to miss anything. There were ferrets, mice, cockroaches and turkeys. Autumn was mesmerised by the latter!

It wasn’t long before she wanted to get closer to the animals and run around, though. Folly Farm is a great place to burn off energy! I tried to show her some beautiful chickens, but she wouldn’t keep still for more than a couple of seconds at a time when she first got out of her pushchair. 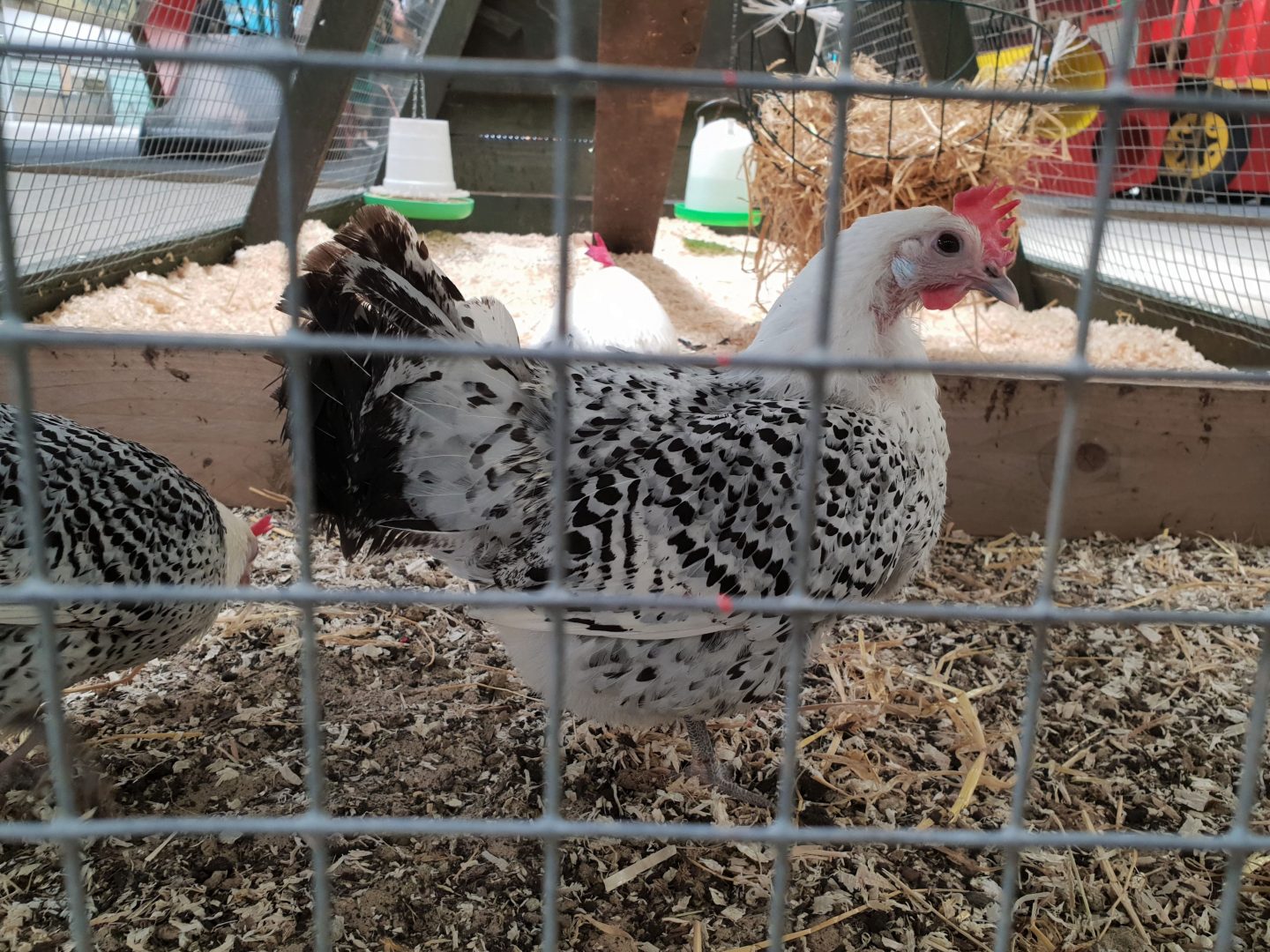 She did spot some activities in the barn and stop for them, though. There were lots of things for children to stop and look at; learning whilst having fun interacting. Although she’s only a year old and didn’t have a proper understanding of the “Whose baby?” activity, she did enjoy spinning the animals and making their noises! 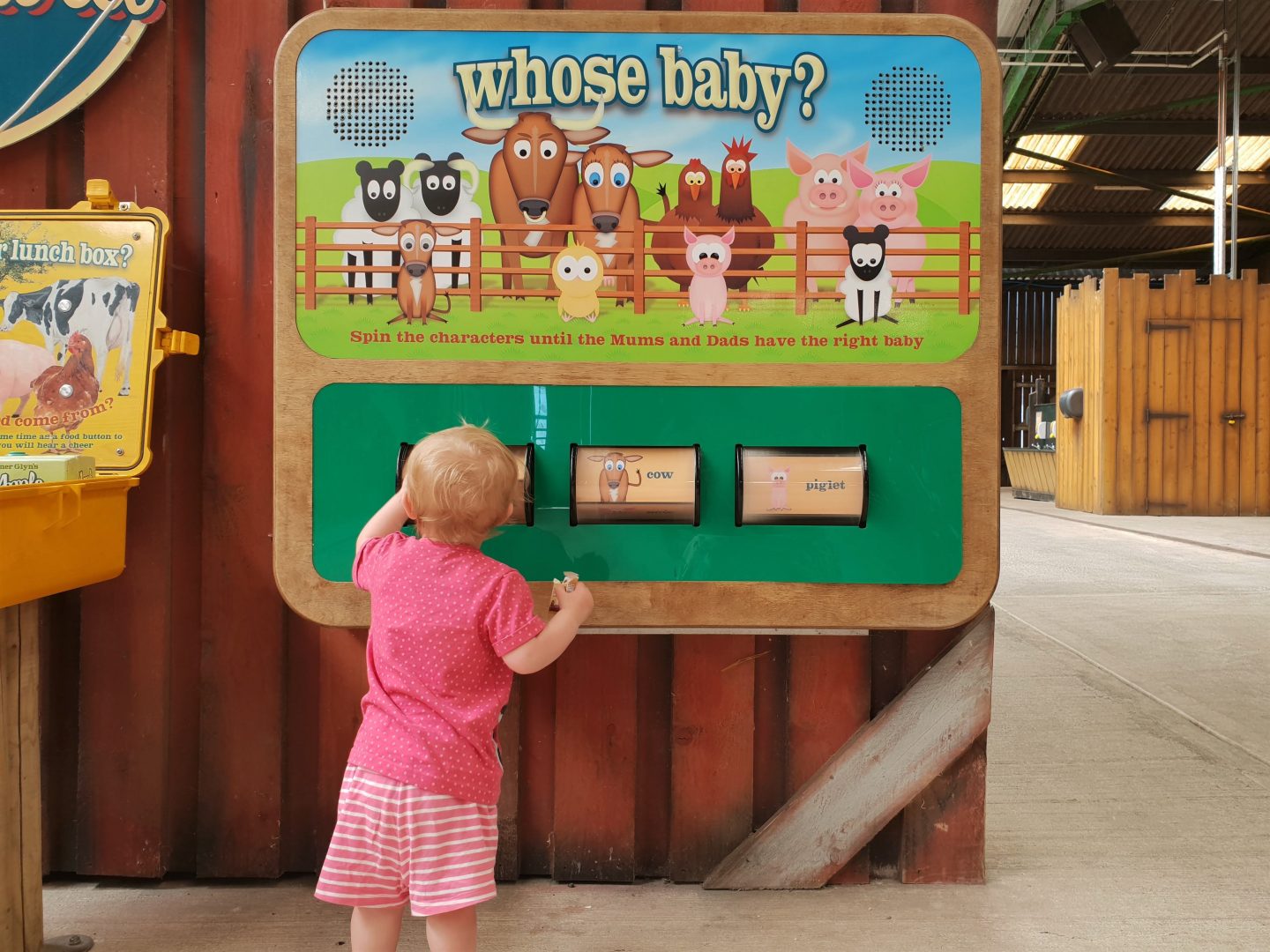 Finally, she began to slow down and enjoy looking at the animals. Autumn always enjoys animals and there were lots of smiles as she looked at the sweet little chicks that were only a week and a half old. 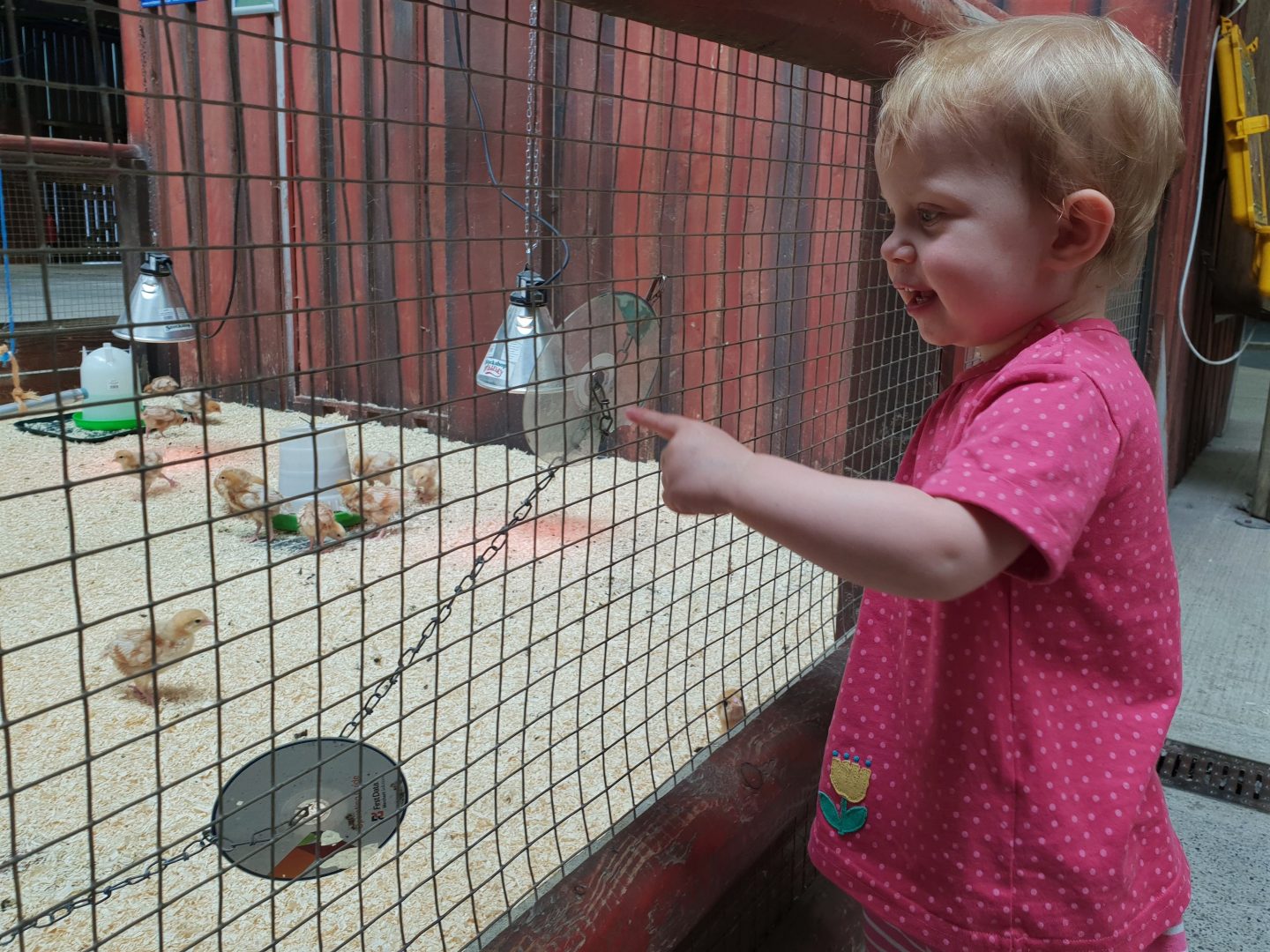 She also really enjoyed watching the rabbits, although she was sad she couldn’t have a cuddle! There are actually various times throughout the day where you can get up close and personal with the animals in the barn. While we were there, there was even a time you could go and help feed baby goats. We didn’t go to any of these, as Autumn starts off gentle but can make startling movements and noises when she gets excited! 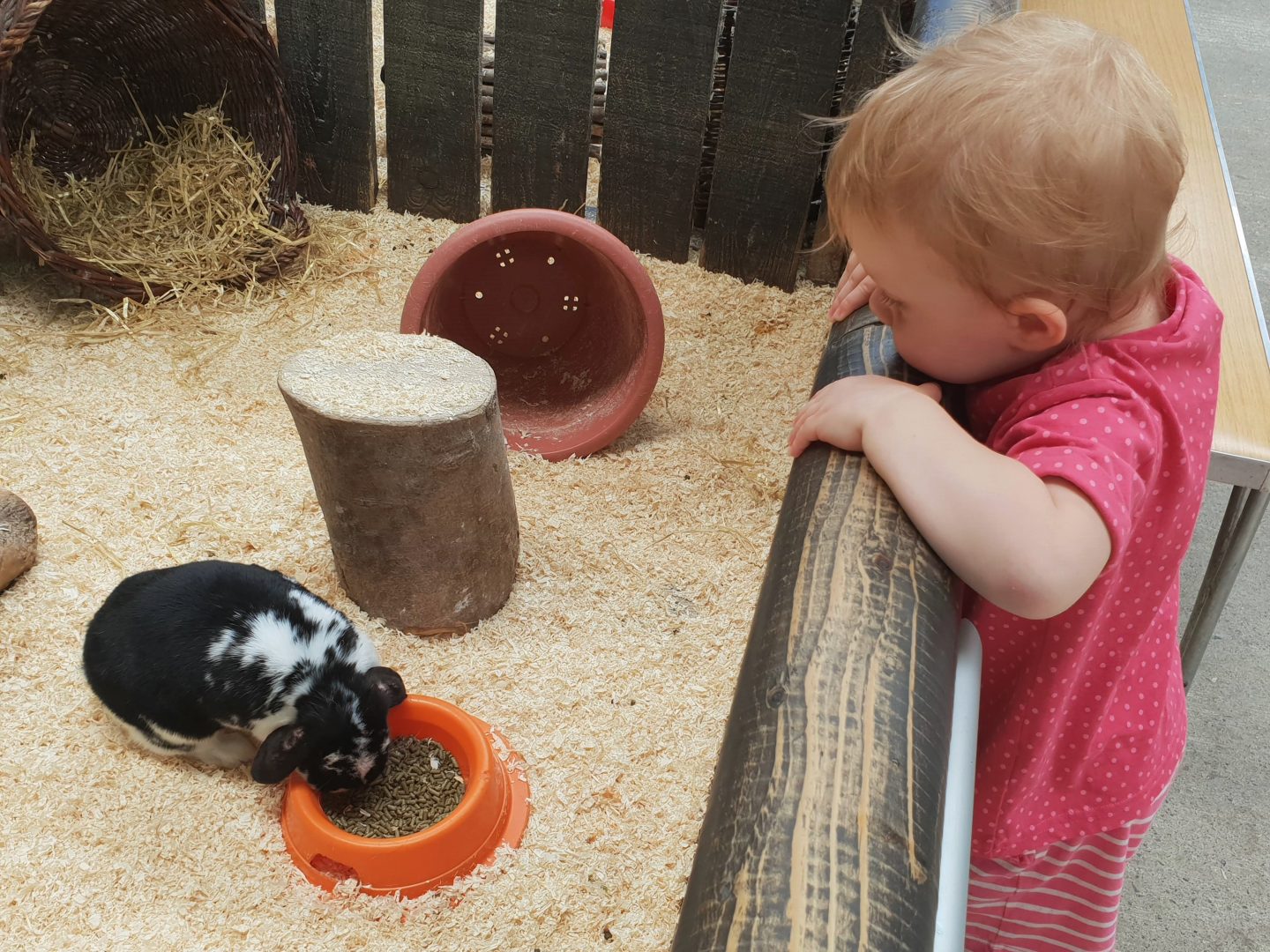 However, she did spot a bit of straw that had fallen on the floor and took great joy in posting it back to an onlooking goat. Don’t worry, we were careful of those precious little fingers to make sure they didn’t get bitten!

There is a playground inside the barn, which would be great for when there is inclement weather. However, Autumn was more content with walking along these blocks that you can rearrange to show the harvest process. 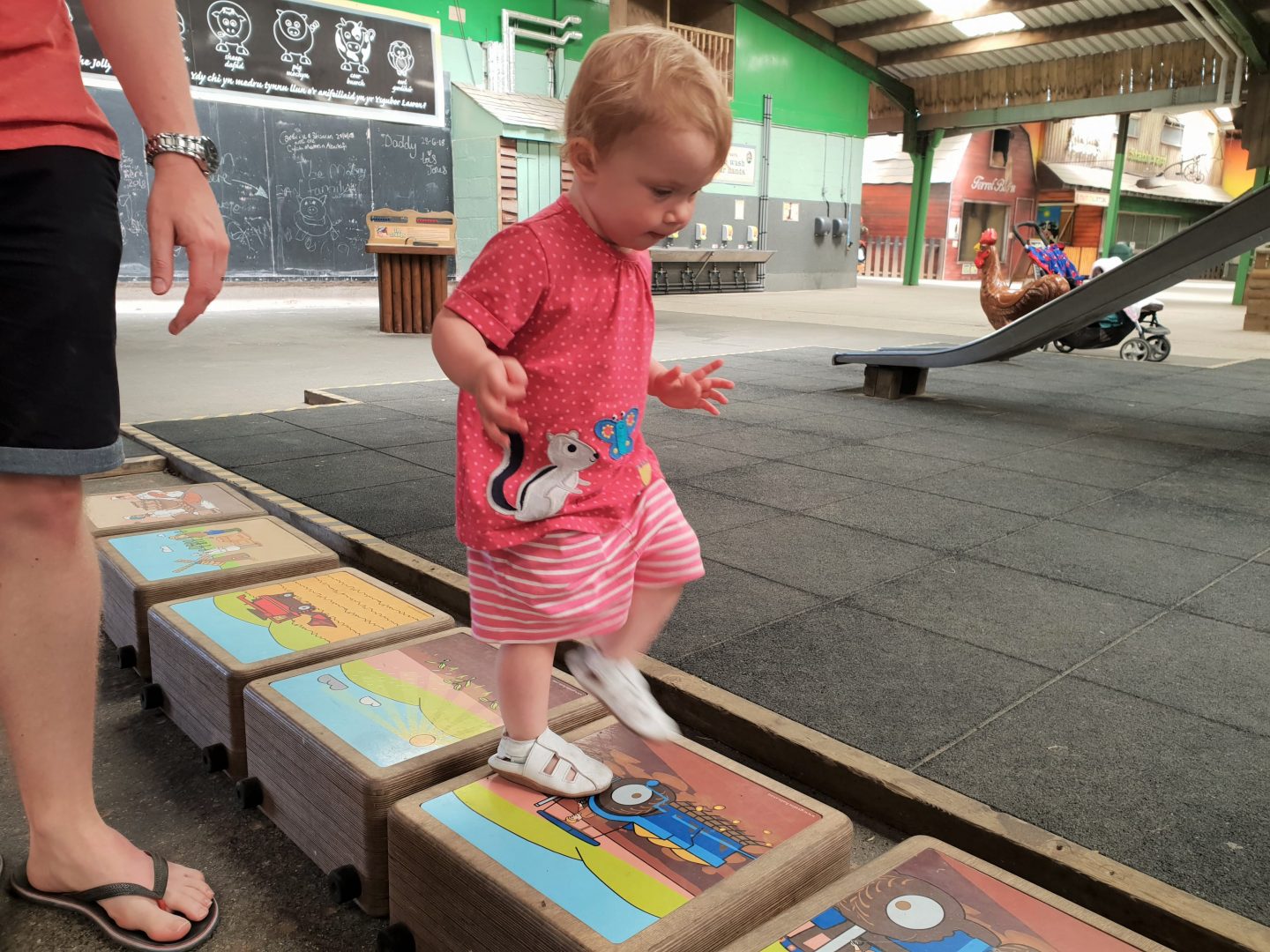 There was a land train ride due to start in a number of minutes, so we said hello to the donkeys and Shetland ponies before heading over to The Piggery to catch it. The donkeys were adorable and are amongst the many animals you can adopt at Folly Farm! 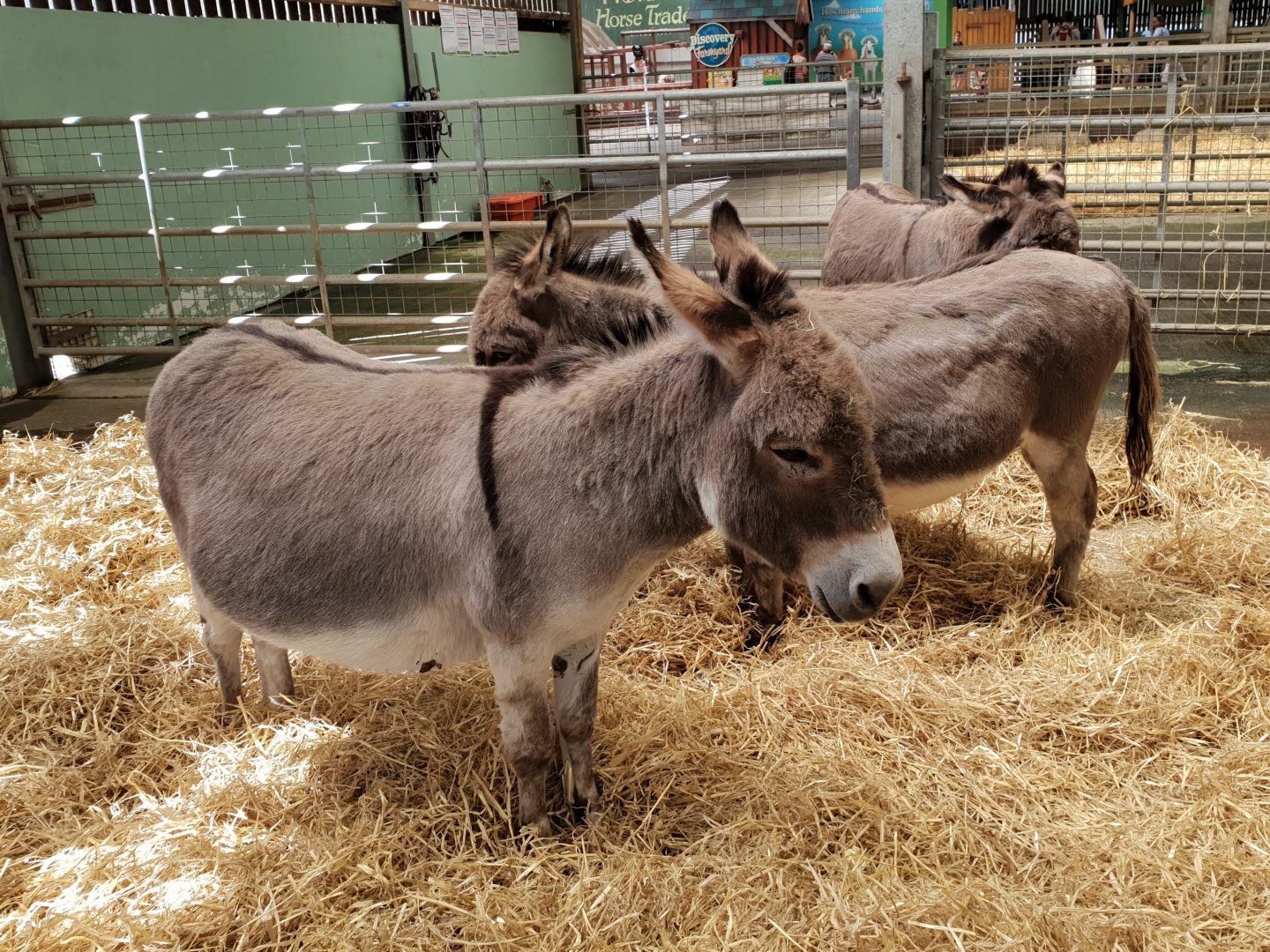 Autumn could barely contain her excitement while we waited for the land train. She kept saying “choo choo!” at it. We were a little worried if she’d get bored on it, as the ride takes around 15-20 minutes. However, she really enjoyed it! 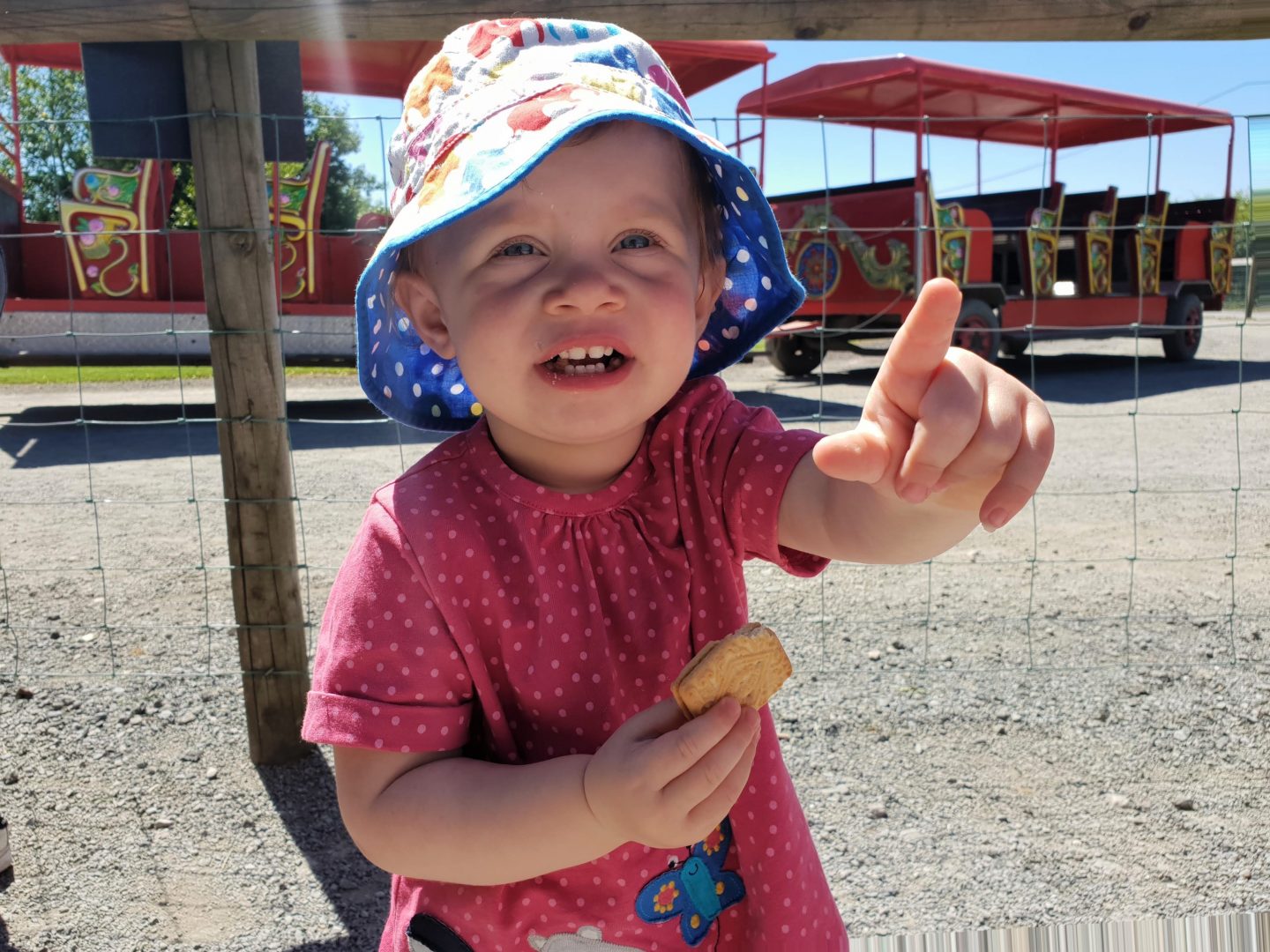 The land train took us on a lap of various animals including sheep, pigs, horses, llamas, alpacas and deer! 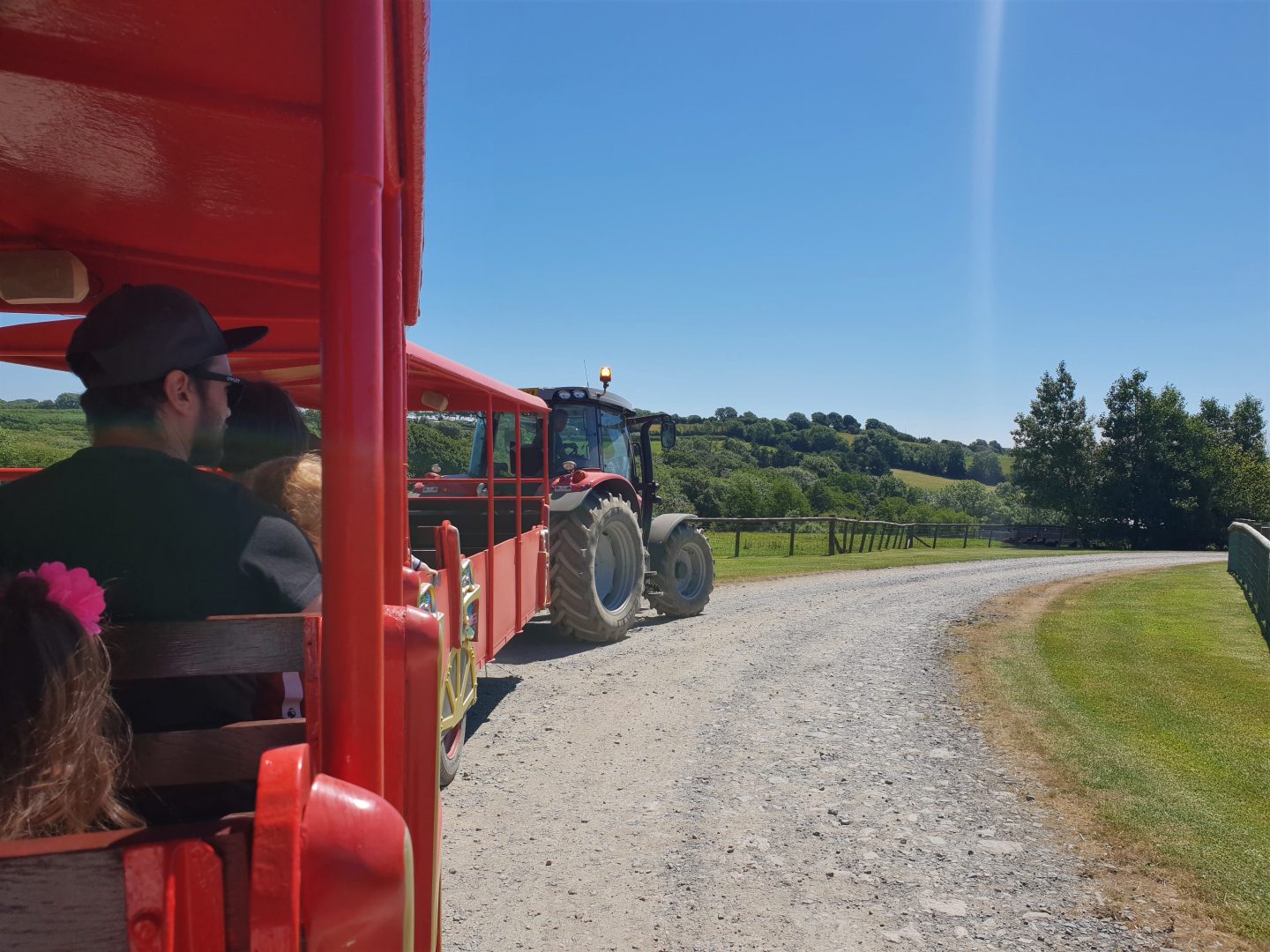 After the land train, it was lunch time and we were all pretty hungry! There are a couple of places where you can buy food and drink at Folly Farm. However, we took a packed lunch with us. There were plenty of picnic benches dotted around to choose from – just make sure you watch out for the seagulls!

Unlike the farm section, the zoo is mostly outside rather than undercover. I was delighted to see that Folly Farm have 3 giraffes! There is even a platform you can go onto to watch them from above their height and it was remarkable to watch one of them eating up so close. 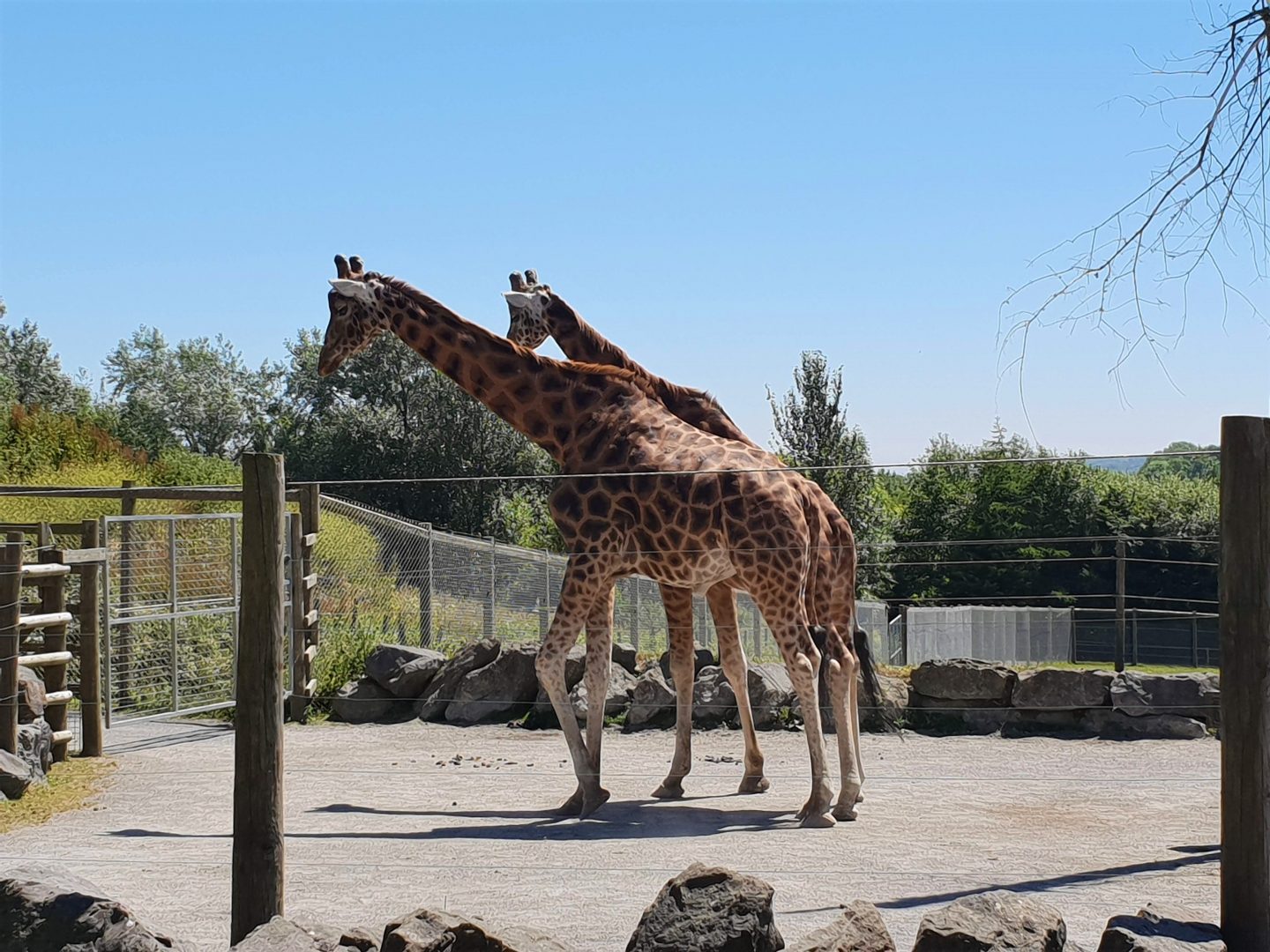 Autumn loved them too; she’d never seen a giraffe before. She was babbling away as she pointed at them. I’d love to know what she was trying to say! 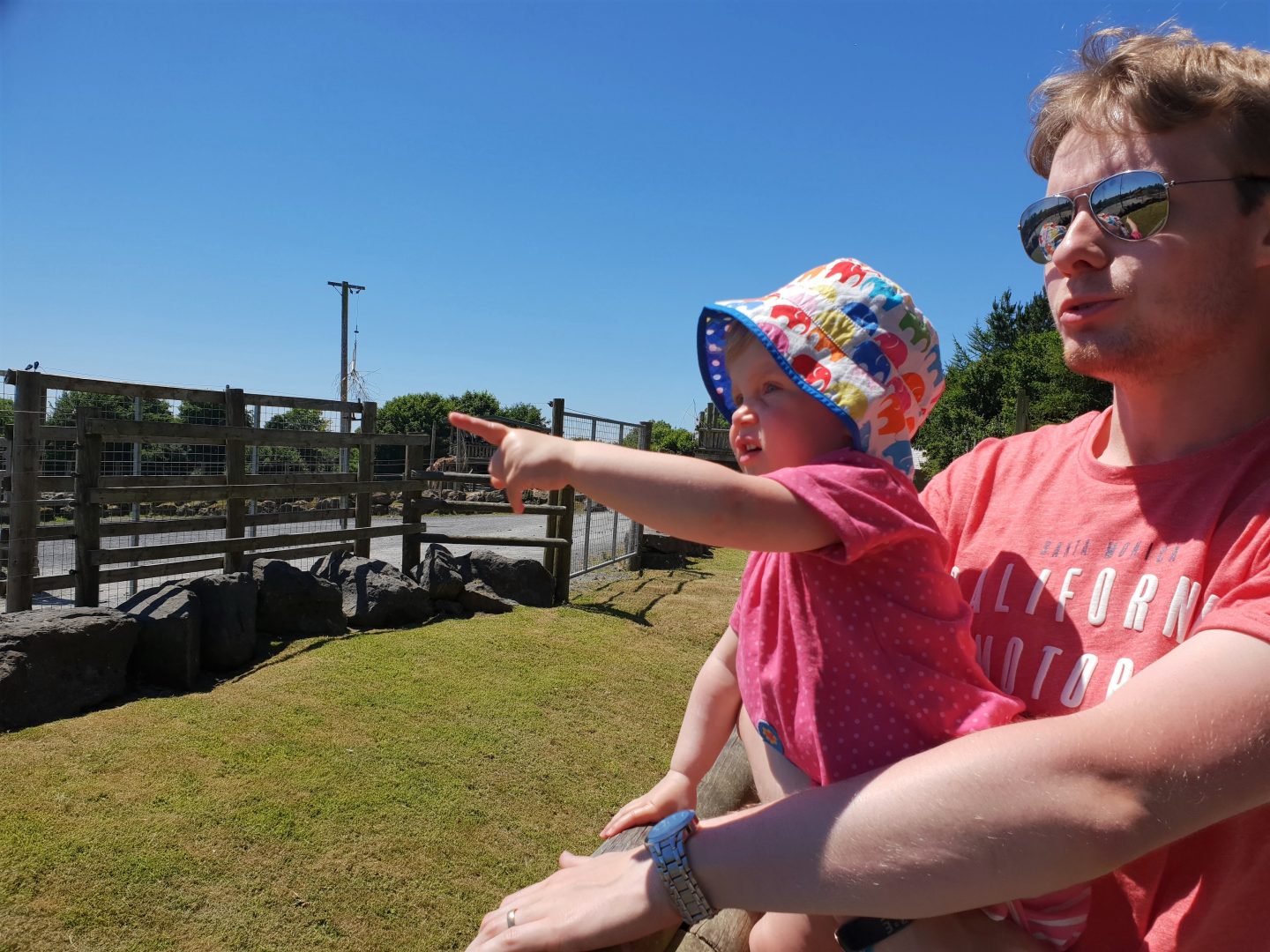 Folly Farm have a good selection of zoo animals, including rhinos, lions, lemurs, meerkats, camels and tapirs! I think my personal highlight of the trip was the penguins, though. I was mere inches from a couple of Macaroni Penguins at one point and got splashed by water from their wings as they shook themselves off! 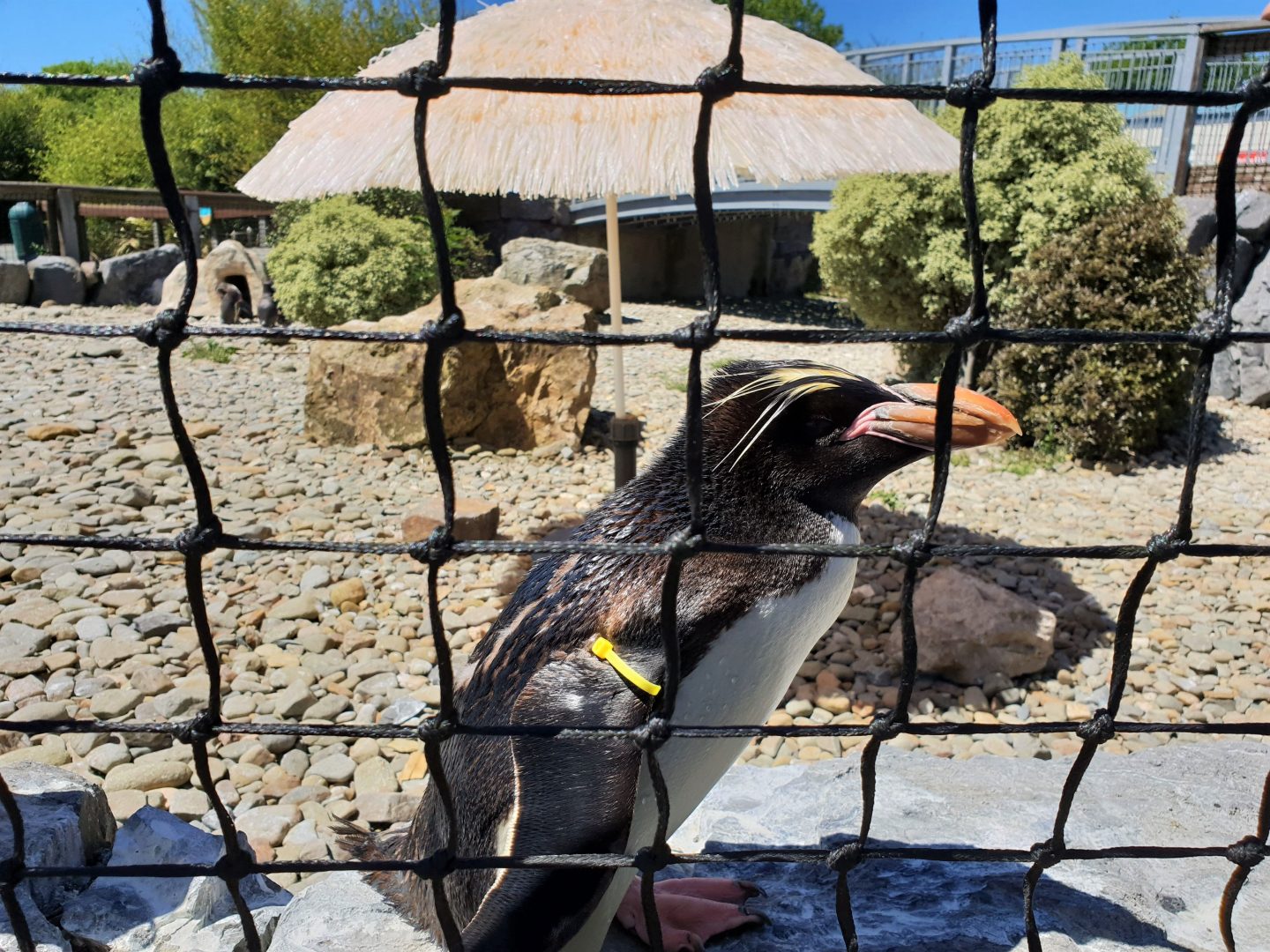 We’d made sure we got to the penguin enclosure for feeding time. Unfortunately, it was bang in the middle of Autumn’s nap time so she fell asleep. However, my husband and I enjoyed watching all the penguins gather and dive into the water as the fish was thrown! A visitor was helping to feed them as one of the feeding experiences that Folly Farm offer for an additional cost. 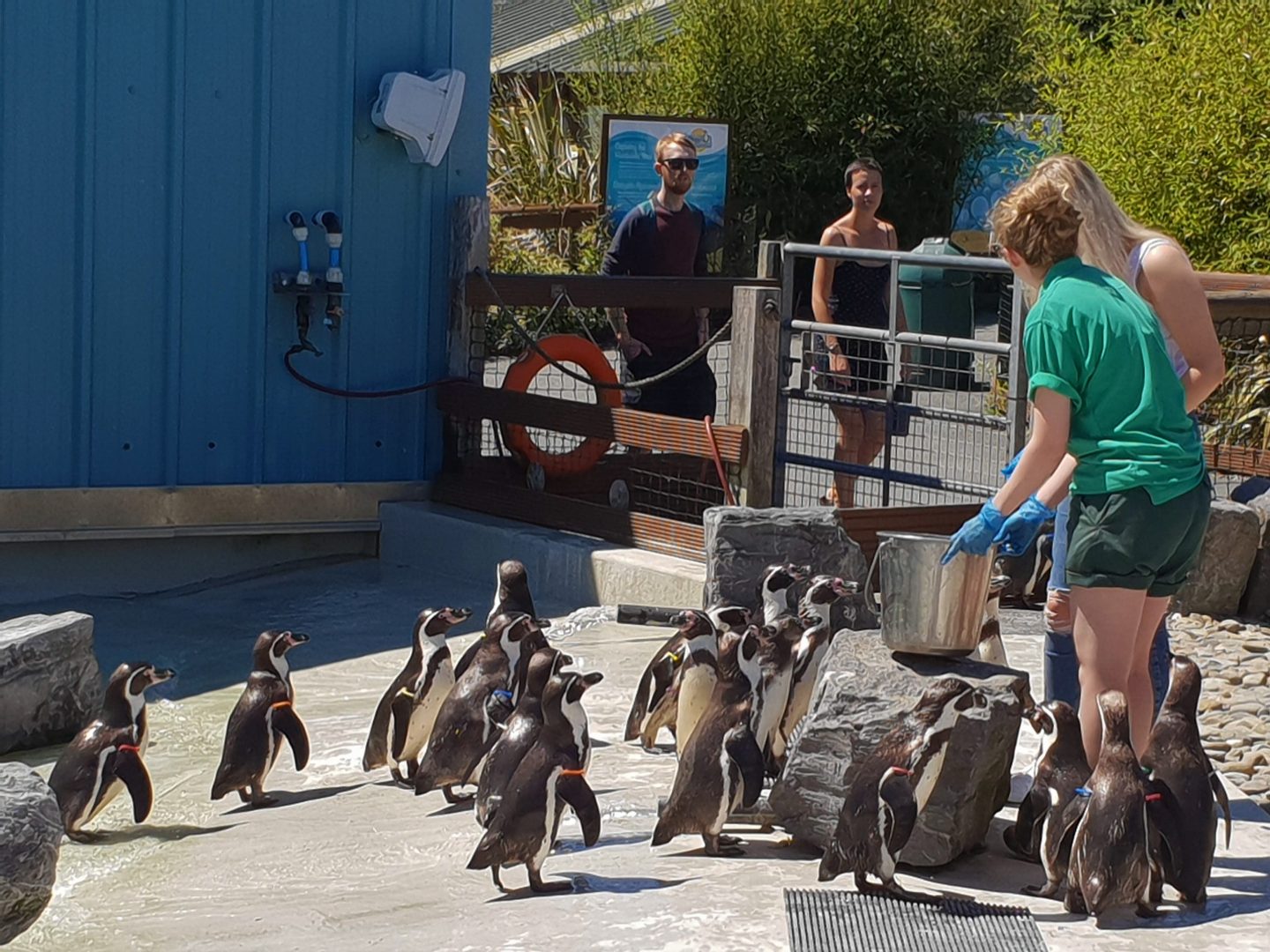 However, possibly my favourite part of all was that there is a large glass window undercover where you can watch the penguins swimming past you. This Humboldt Penguin moved so gracefully through the water; it was both relaxing and amazing to watch. 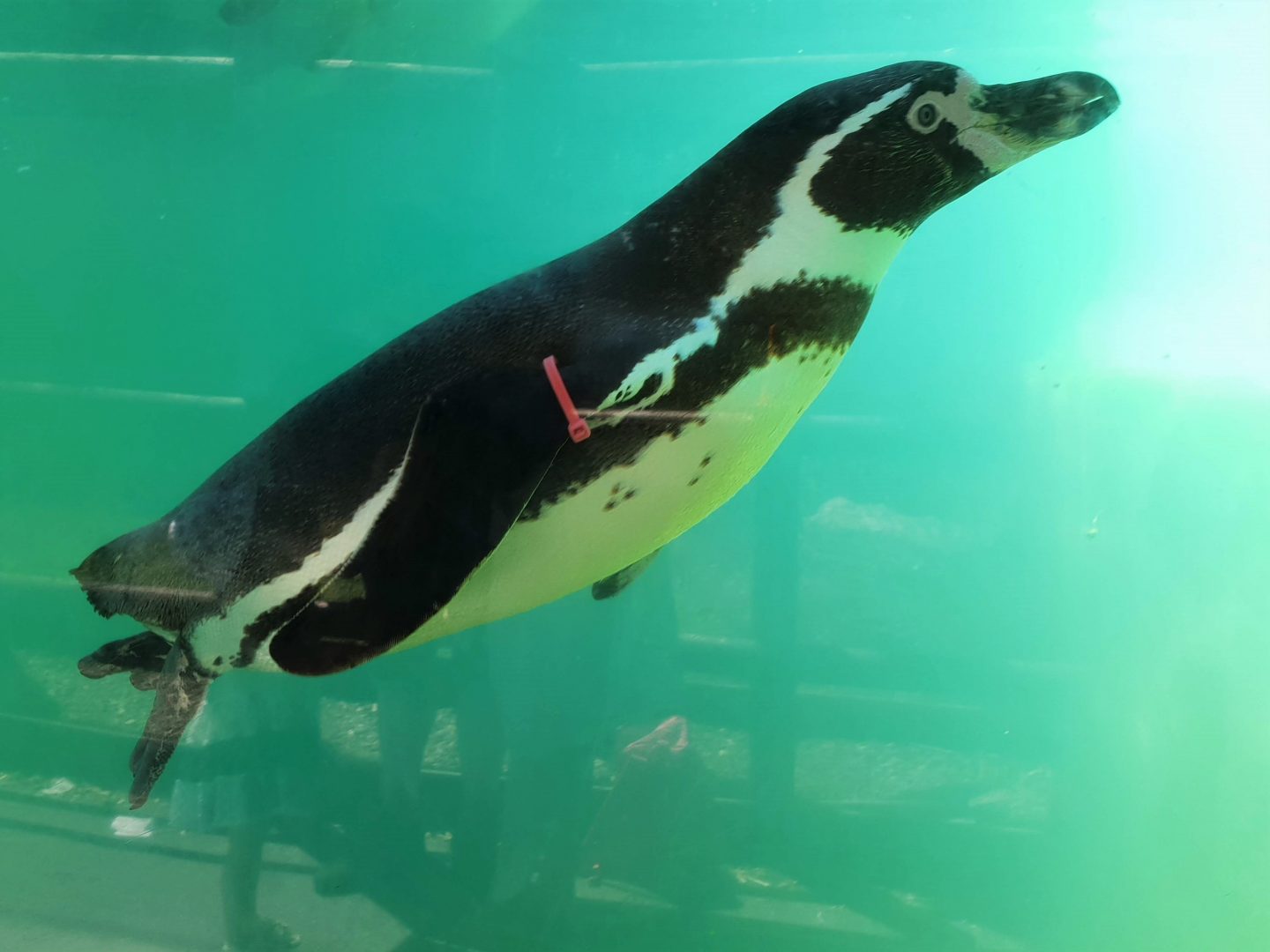 My husband and I continued to walk around and enjoy looking at the animals as Autumn napped. Continuing to move around is often key to keeping her asleep in the pushchair! However, she woke up as we got to the rhinos. A zoo keeper was just chopping some branches off of a bush as we walked past the enclosure. We watched him call the rhino over and throw the branches into her, which she thoroughly enjoyed. It was fascinating to watch and listen as she chomped her way through the wood. 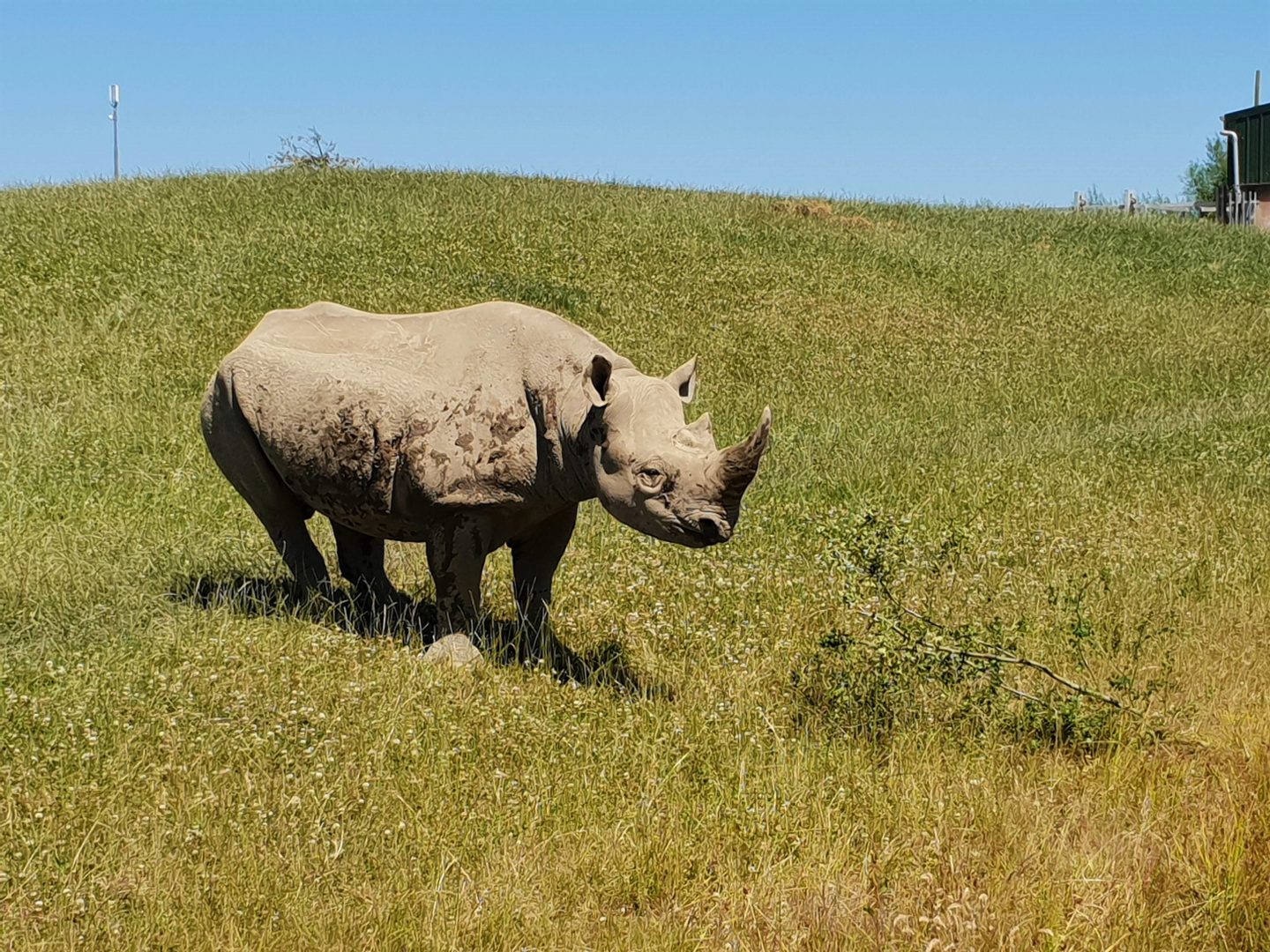 One of my favourite things about Folly Farm is that around half of what they have to offer is undercover. As it rains a LOT in Wales, it’s important to have somewhere you can hide out and entertain the kids. The fairground has plenty of rides to do just that. At the back of the fairground is a Wurlitzer Organ, which you can hear play twice each day. Next door is soft play, so there is definitely a lot to do while you wait for the darker clouds to go overhead. 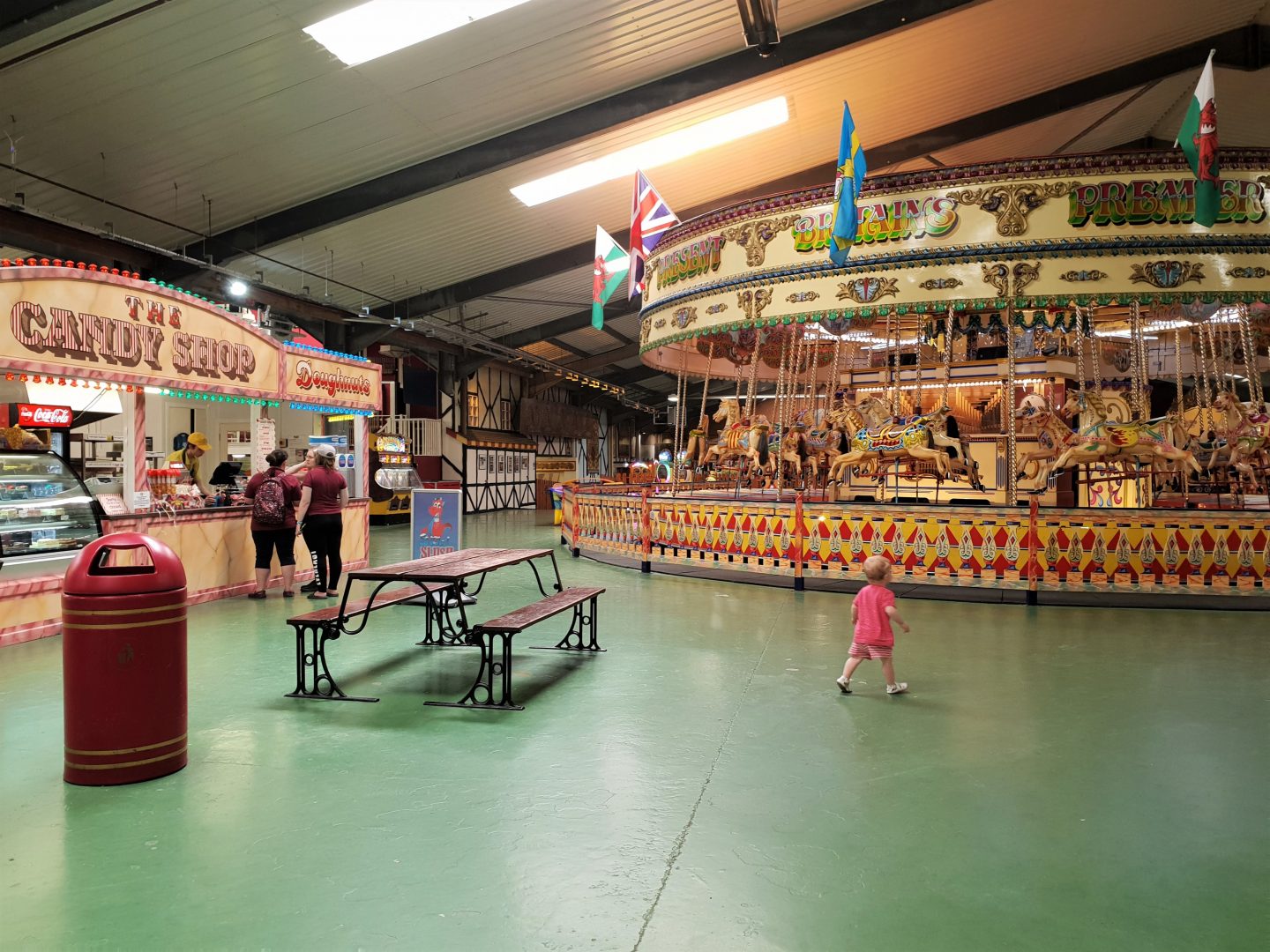 In the play area outside, there was a lot of work being done. Presumably this is to make sure that improvements are made before the school holidays begin! Autumn was fascinated by the big wheel. 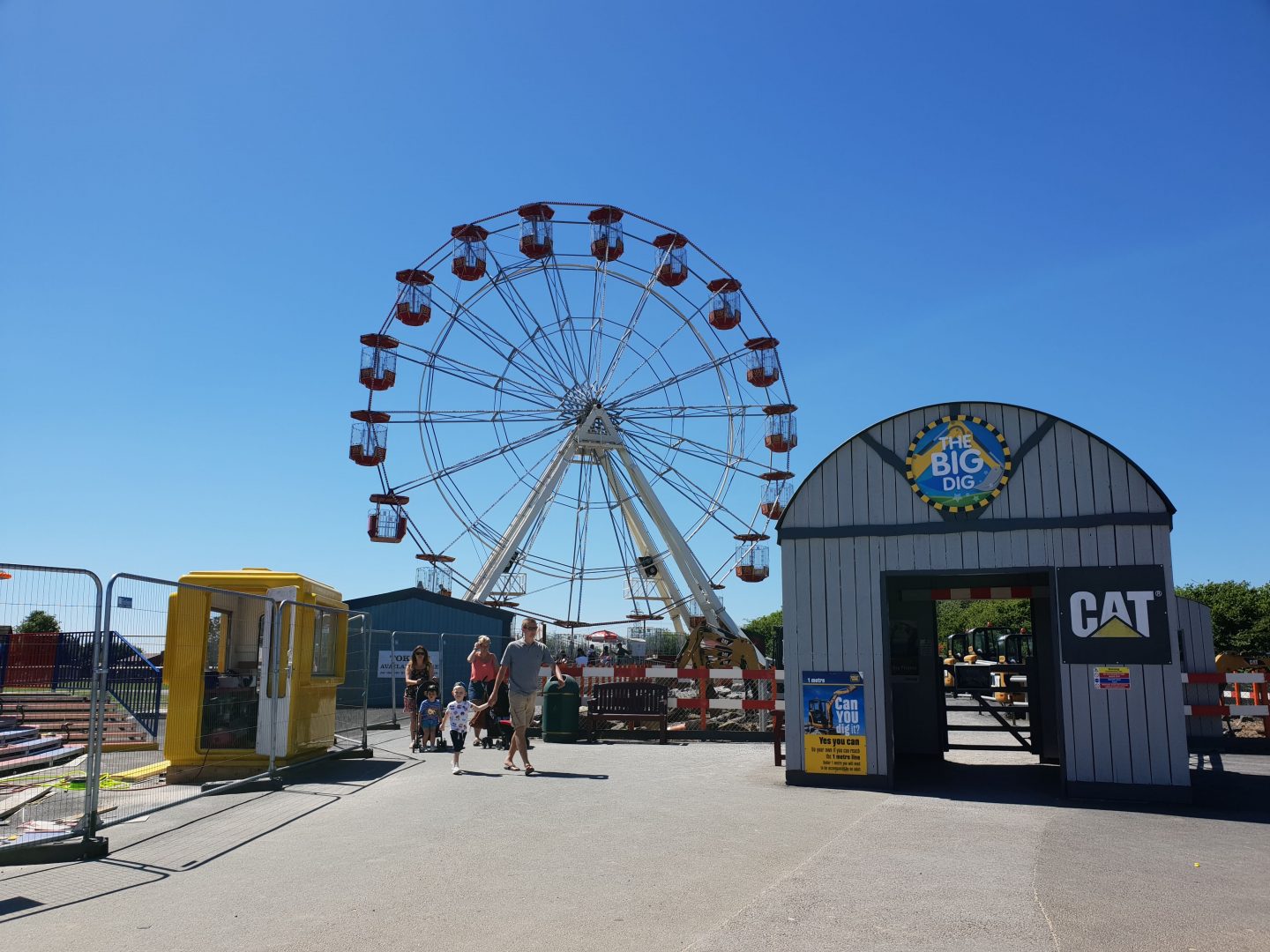 She loved the destruction playground. Although some of it was a bit old for her, she still gave everything her best shot! 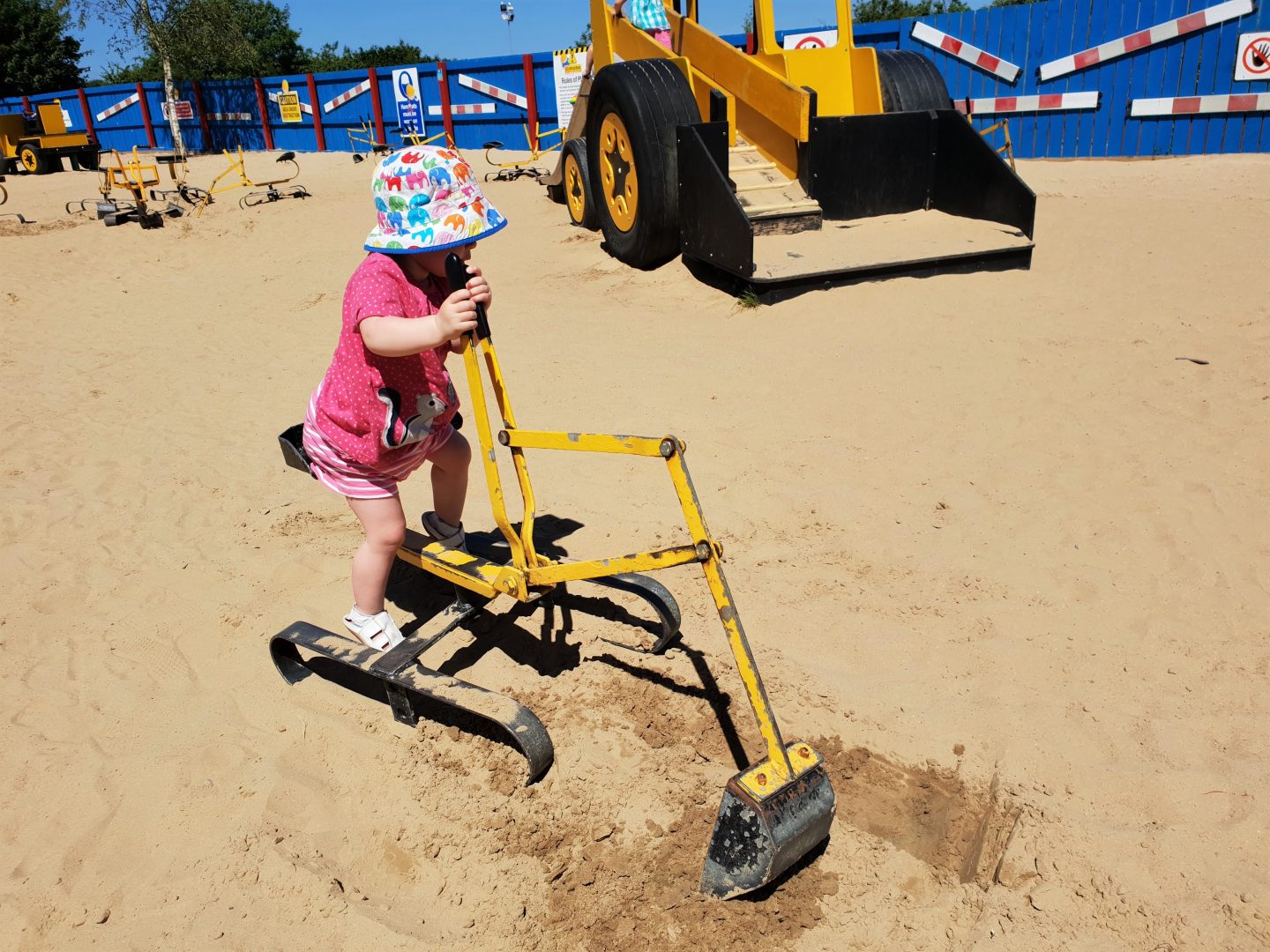 She even got her hands on the steering wheel of a Land Rover. 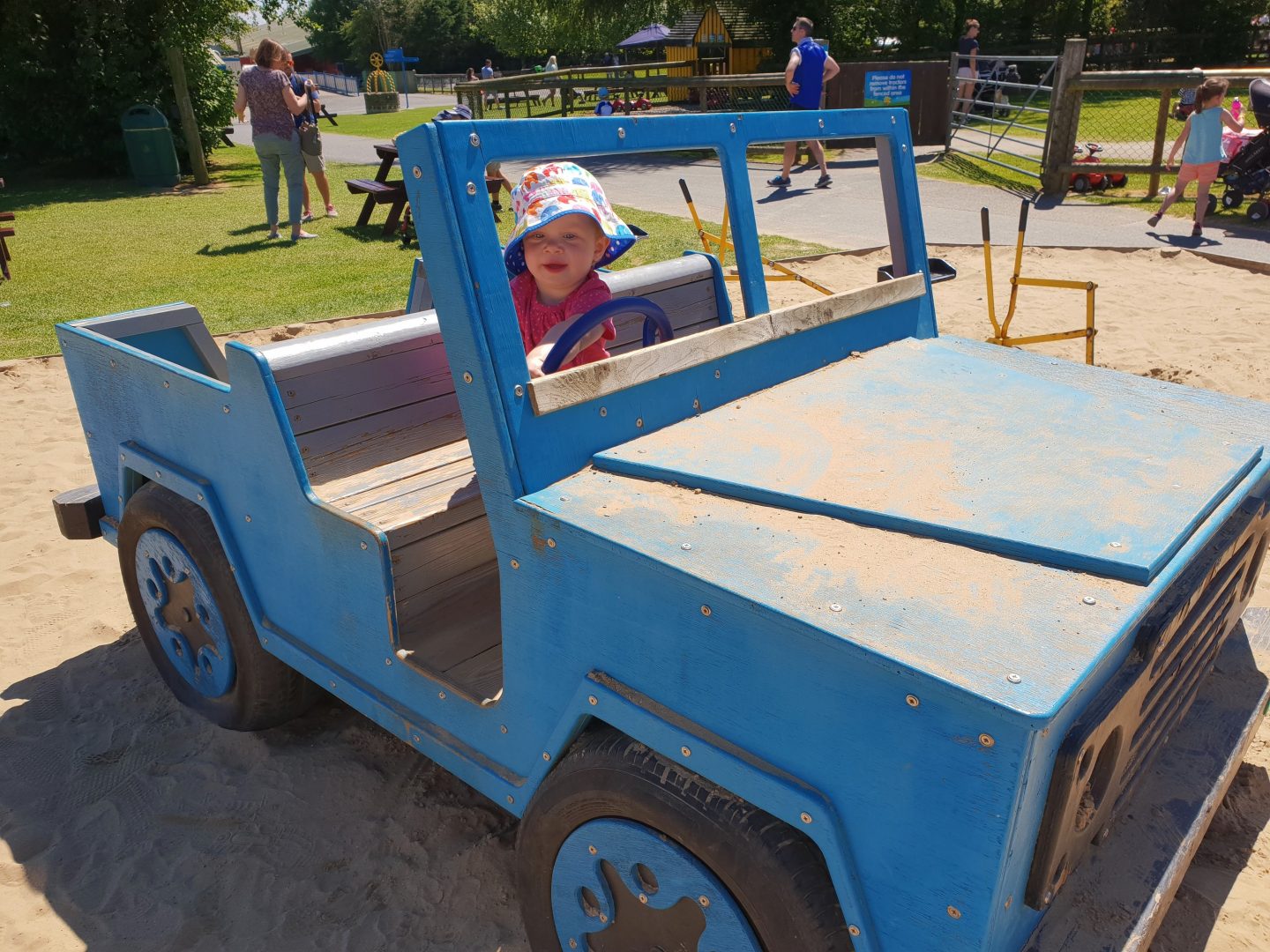 I just had to mention the gift shop in my review. It is truly the most amazing gift shop I’ve ever seen; even I felt excited! 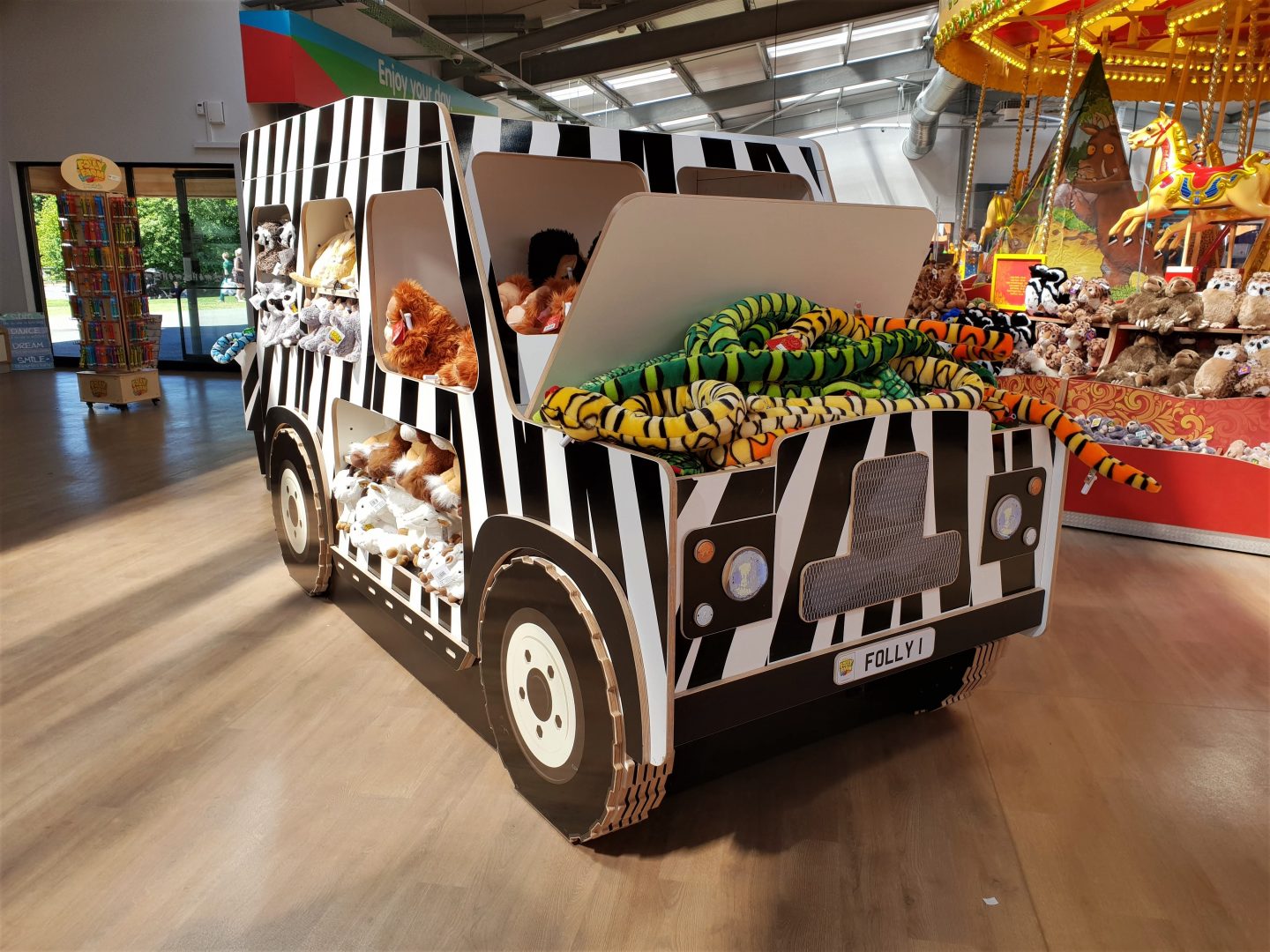 There are toys and souvenirs everywhere, all presented in such fun ways. There were Land Rovers full of snakes and a huge carousel with cuddly animals all the way around it. The Folly Farm clothing was all absolutely gorgeous too, I was just disappointed that it seemed to start at 3-4 years as I really wanted to buy some of it for Autumn!

We left with a cuddly penguin and rhino that Autumn chose, as well as an alpaca for me. We had a lovely day at Folly Farm and we were very impressed by it. It is no wonder that it has won awards and currently has a 5 rating on Trip Advisor! It is very in touch with what children require from a day out and I had no problems using the pushchair as it was all very flat and accessible. I was also delighted to see that they have Changing Places facilities!

Folly Farm is an ideal attraction to visit if the weather looks changeable or is raining (if you don’t mind getting a little wet to look at the zoo animals!) If you’re staying at Bluestone, it’s a 10 minute drive away and well worth a visit. I’d recommend putting aside at least 4 hours, but you’ll probably want to give yourself the whole day there to get the full experience!

Disclosure: I visited Folly Farm free of charge for the purpose of this review. As always, all views and opinions are honest and my own.