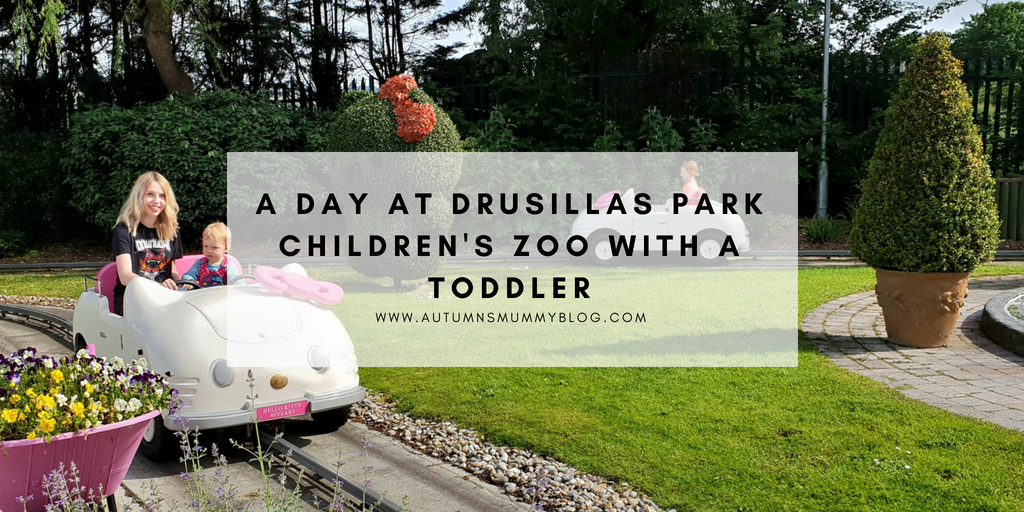 We were recently invited to visit Drusillas Park on a press day to find out about all the fun they have to offer families who live in or are visiting the South East of England. Based near Alfriston, East Sussex, Drusillas Park is an 8.4 mile drive from Eastbourne. We were very excited to visit, as we’d heard great things but had never been before. Meanwhile, we thought Autumn would love it as she absolutely loves animals!

What animals are there?

Well, the short answer is lots! Drusillas Park boasts 196 different species and is home to over 1600 animals. There certainly  a  large variety of creatures, sure to delight children and adults of any age.

There are many zoo animals, mostly of a smaller type. There are many kinds of primate, including Sulawesi crested macques, brown capuchin monkeys and the striking black and white colobus monkeys that Autumn is admiring in the picture below. 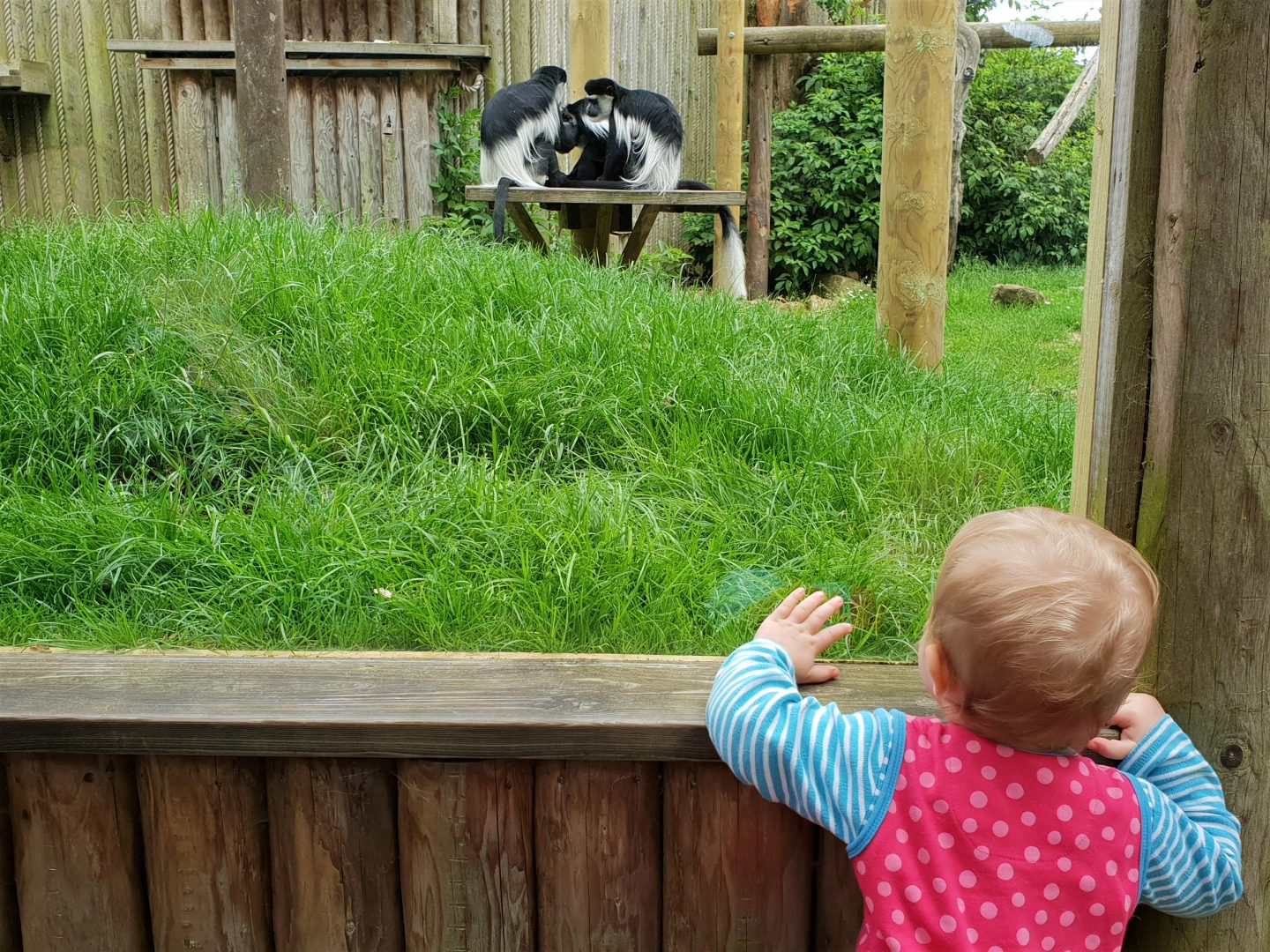 Unfortunately, when we first arrived at Drusillas Park, Autumn was in a bit of a grumpy mood. She was pretty much just running past everything. Due to this, there were several animals I missed. Still, that’s a good excuse to visit again, if you ask me!

However, other animals the park has include red pandas, African crested porcupines, Humboldt penguins, alpacas, fruit bats, anteaters and servals. Autumn did let me stop for long enough to admire a Kookaburra! This was probably helped by the fact that I burst into song about it. 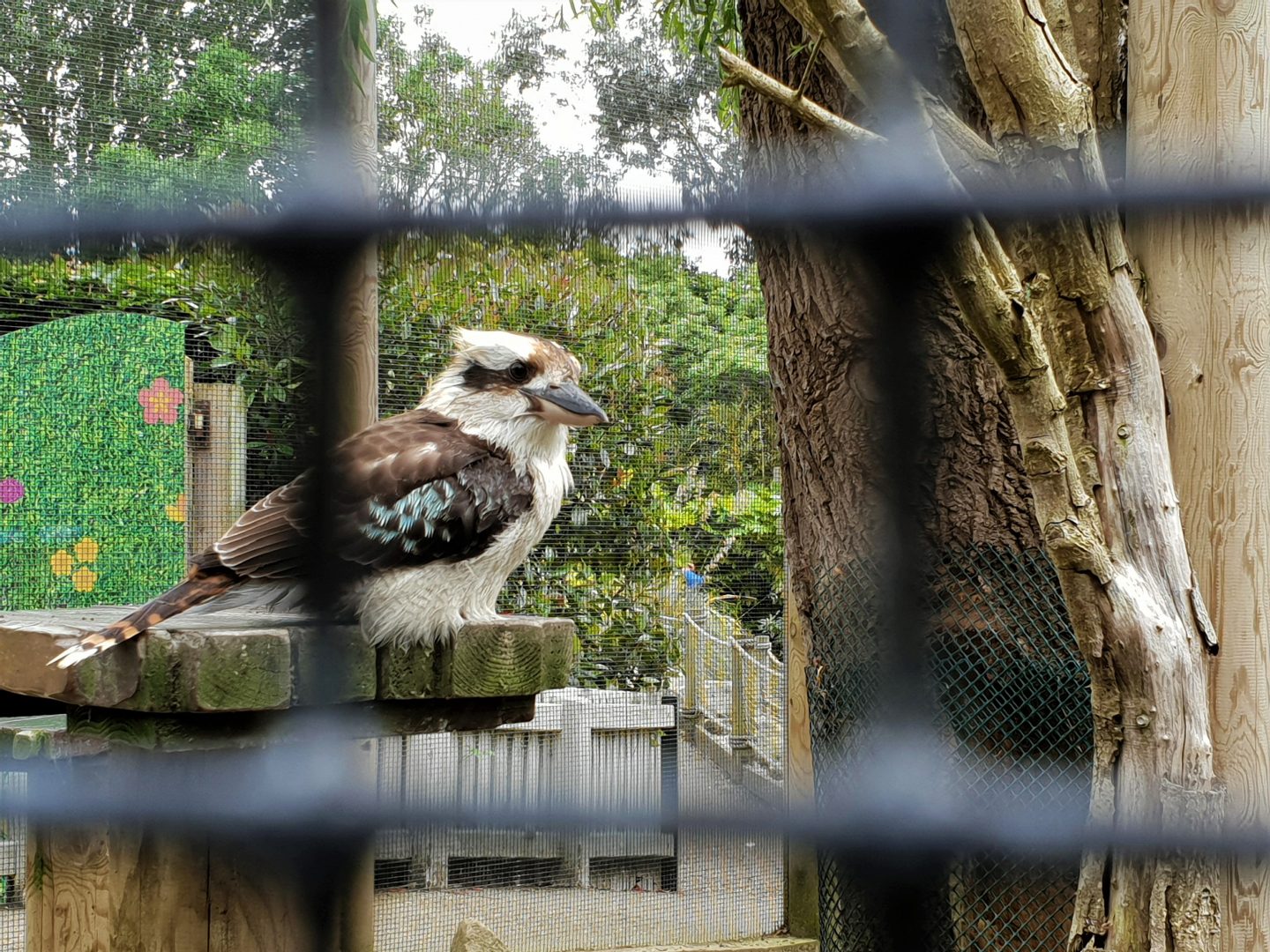 One of Autumn’s favourites were the flamingos! She kept putting her arms out, trying to coax them towards her. I was intrigued by the mirrors in their enclosure. This is to make the birds happier by giving them the illusion that there are more flamingos than there really are, as they are flock birds. 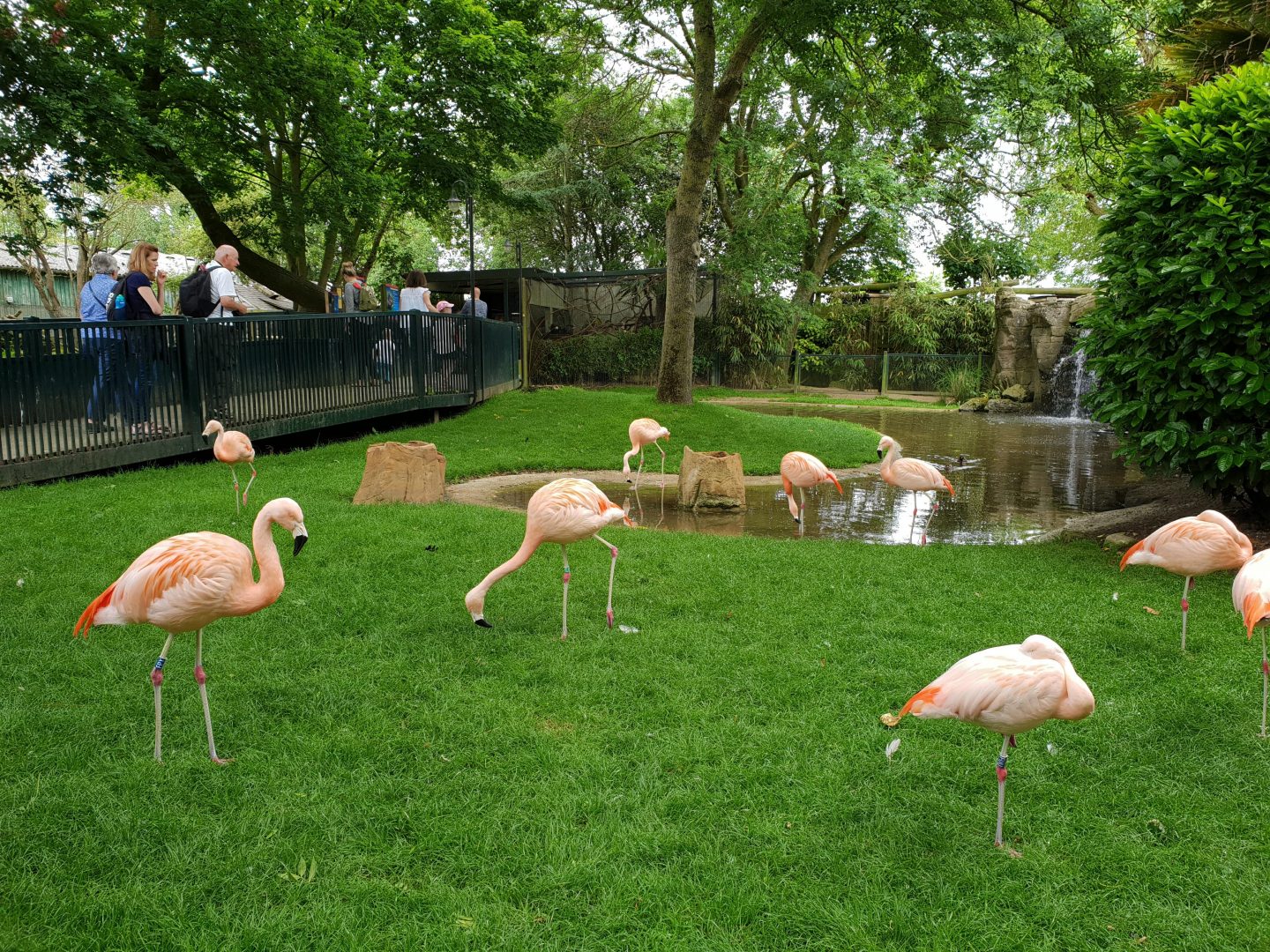 Fortunately, Autumn began to behave a little better after eating the sandwich we’d packed her for lunch and started to enjoy looking at the animals a bit more. 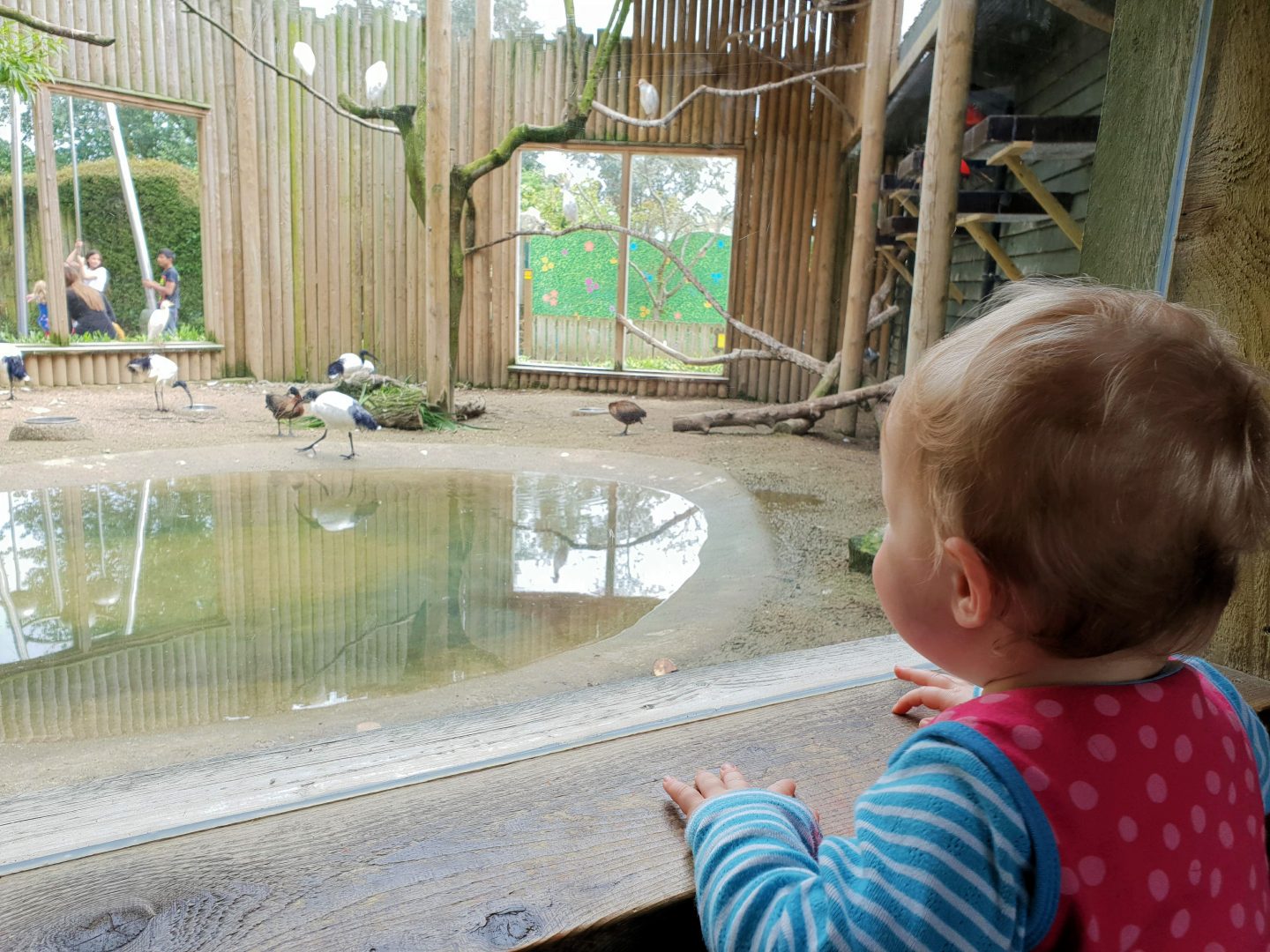 She really liked the otters! As she loves water and swimming so much, I think she wanted to get in the water and join them. 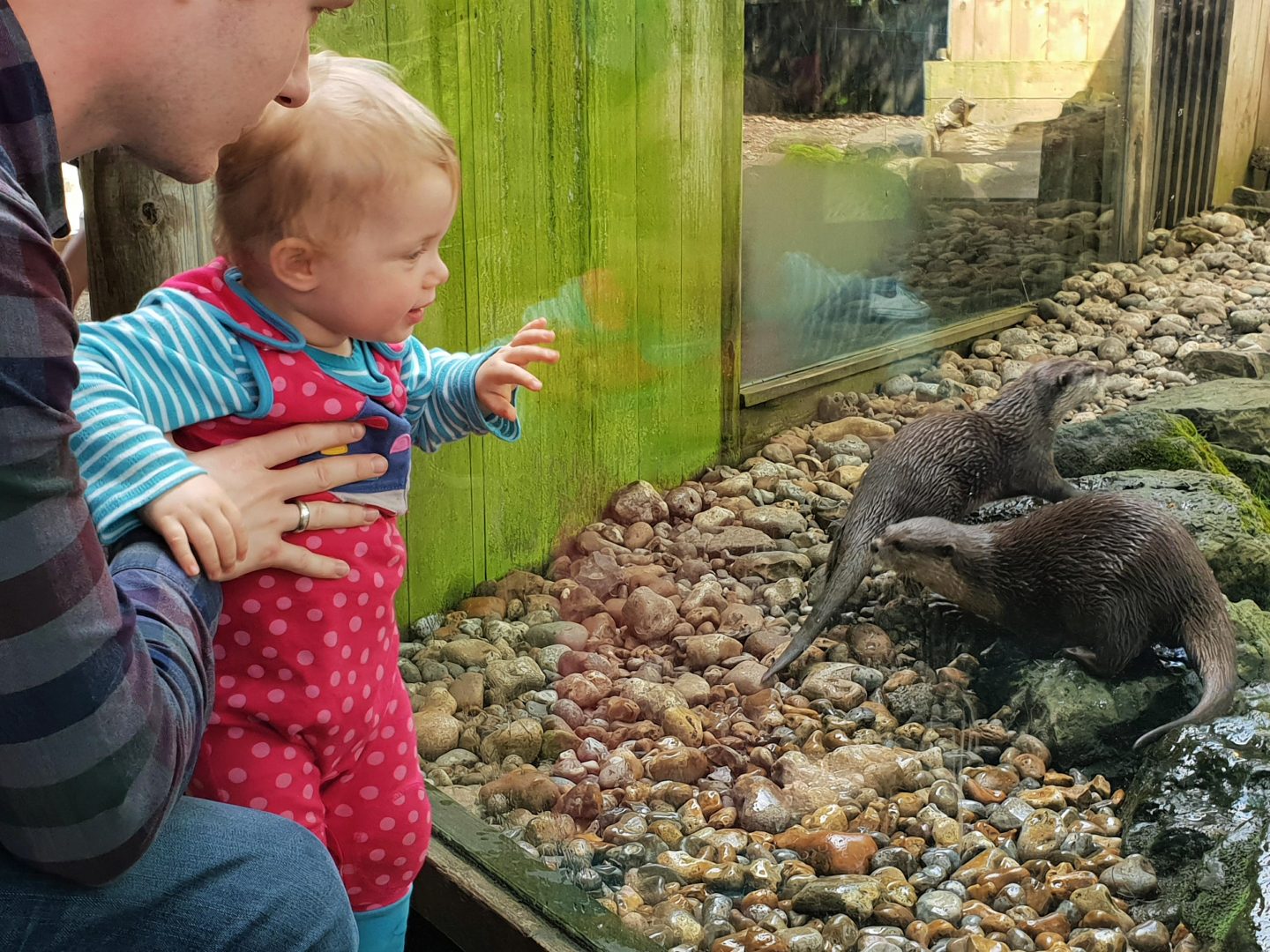 As well as the enclosures that you walk past, there are also two enclosures that you can actually walk through! One of these is the lorikeet aviary. You can feed these beautiful, colourful birds a pot of nectar (£1) and see them up close as they perch on your arm. Unfortunately, they had already had lots of nectar and the sun had come out when we got to them. A lovely volunteer apologised profusely. However, I’d feel like sitting on a perch too if I’d already had a lot to eat, I can’t blame them.

The other walk through enclosure is Lemurland, which was one of my most favourite parts of our trip. I was actually taking photos of some of the lemurs through the fence, when one jumped up onto the fence and sat just above my head a couple of inches away from me! My husband had to restrain Autumn as she we could see she desperately wanted to give the lemur a hug! 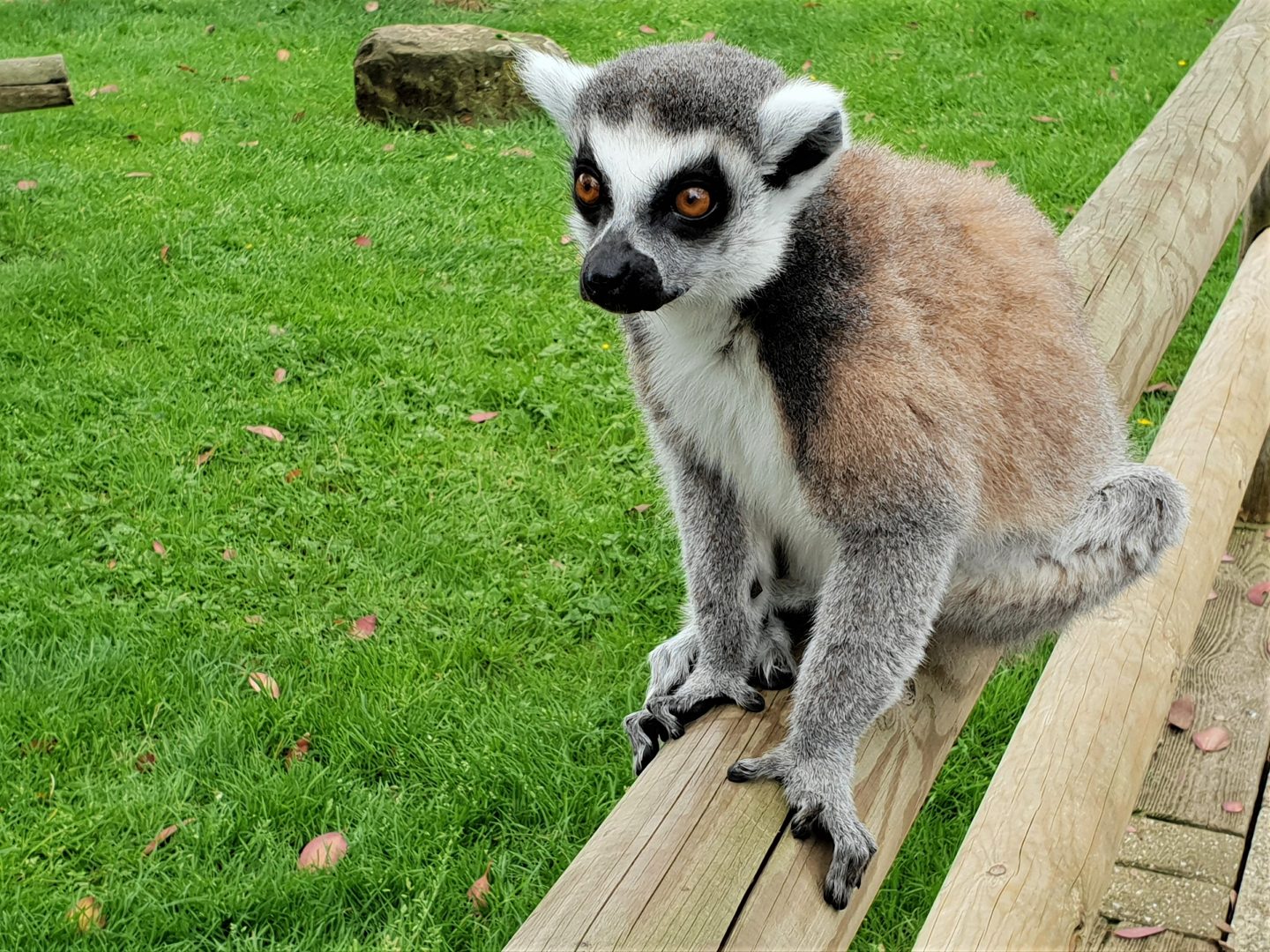 The farm animals are quite near the beginning of Drusillas Park, so unfortunately I ran past most of them trying to keep up with Autumn! We did stop for long enough to look at a sheep and say “Baa” though. 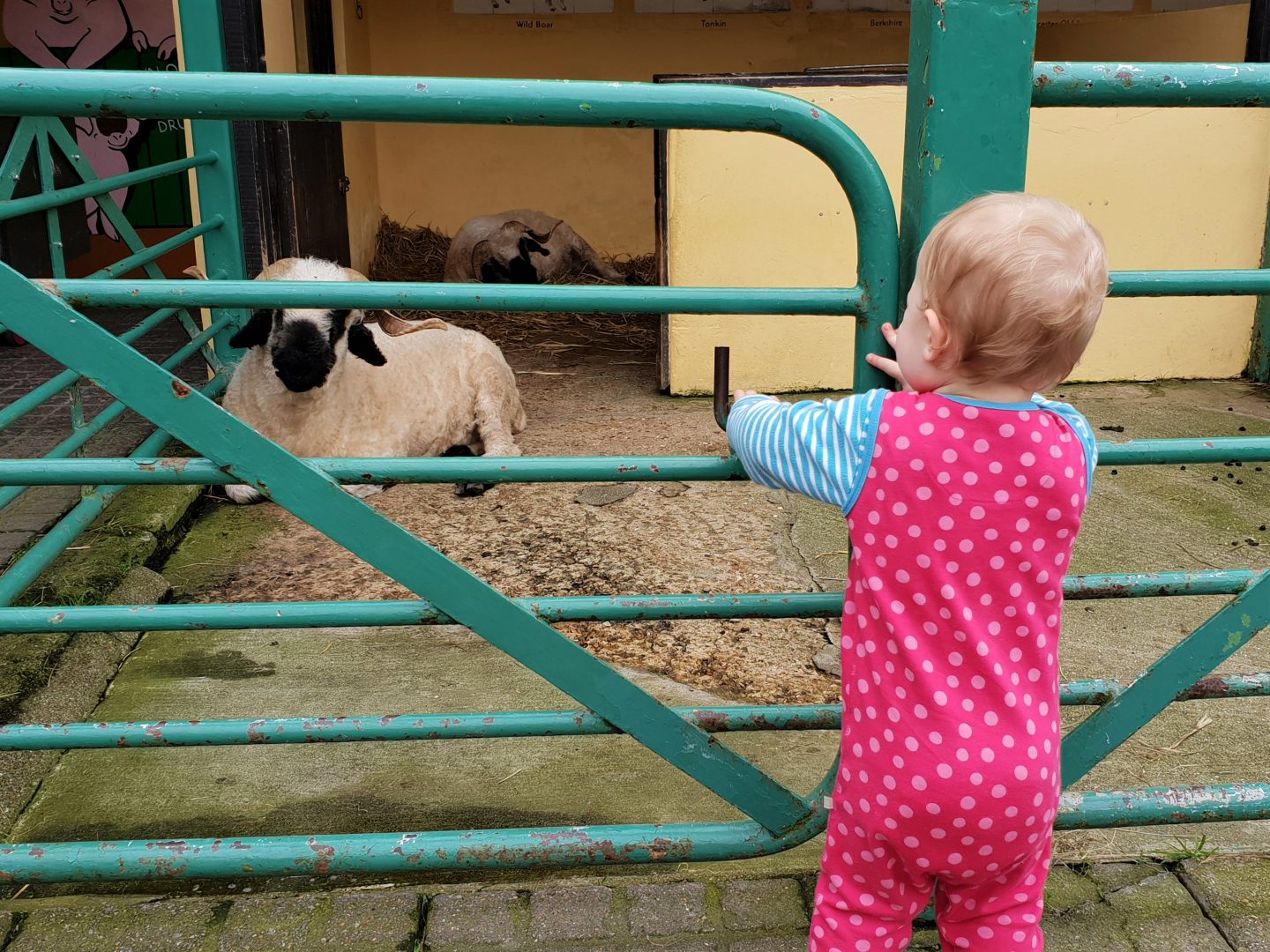 Autumn even tried her hand at being a sheep! 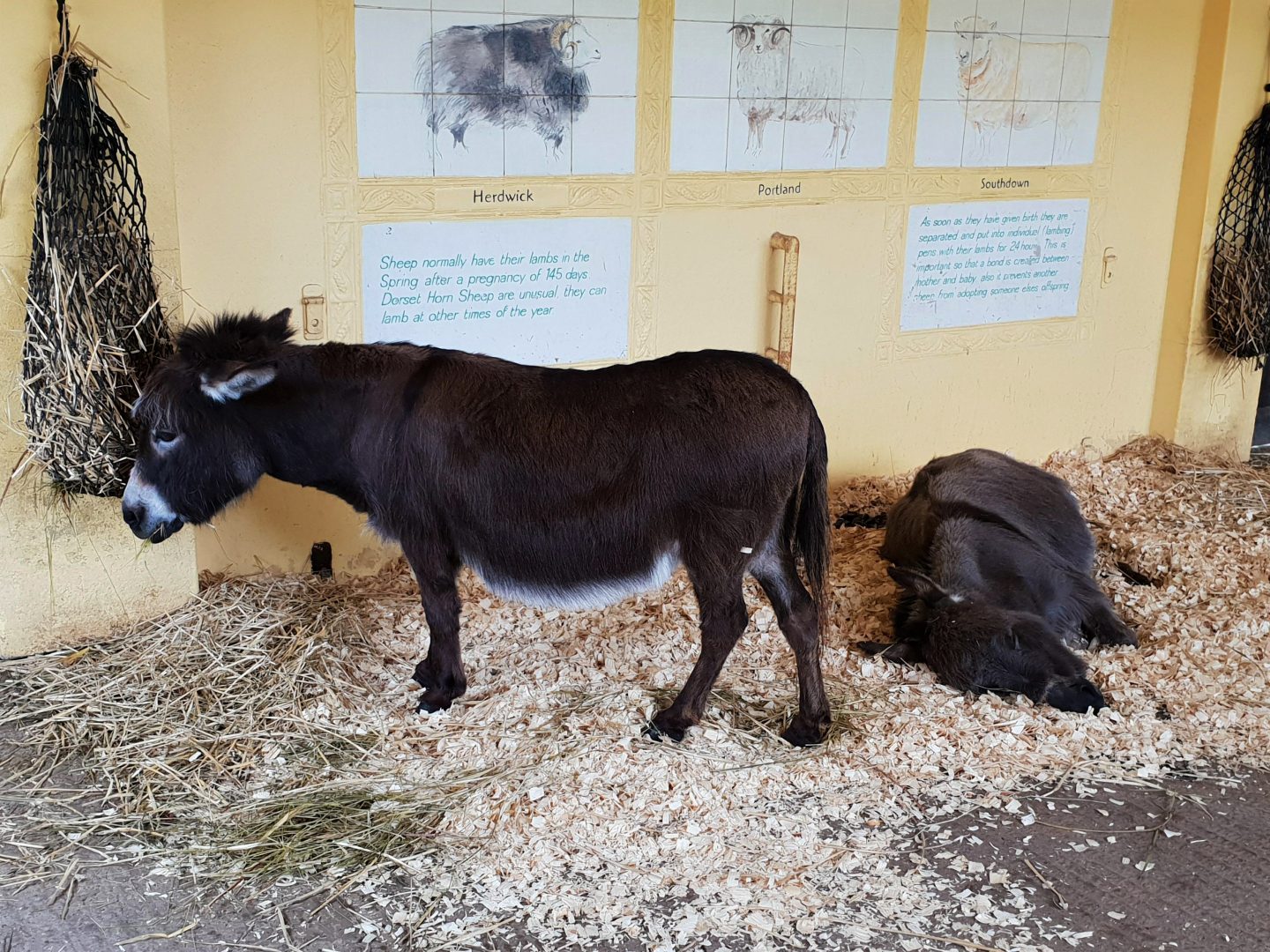 There are also some animals at Drusillas Park which may a little more familiar to your child as they are often kept as pets. The guinea pigs who live in a replica of the Tellytubbies house were very sweet and took me back to my childhood. 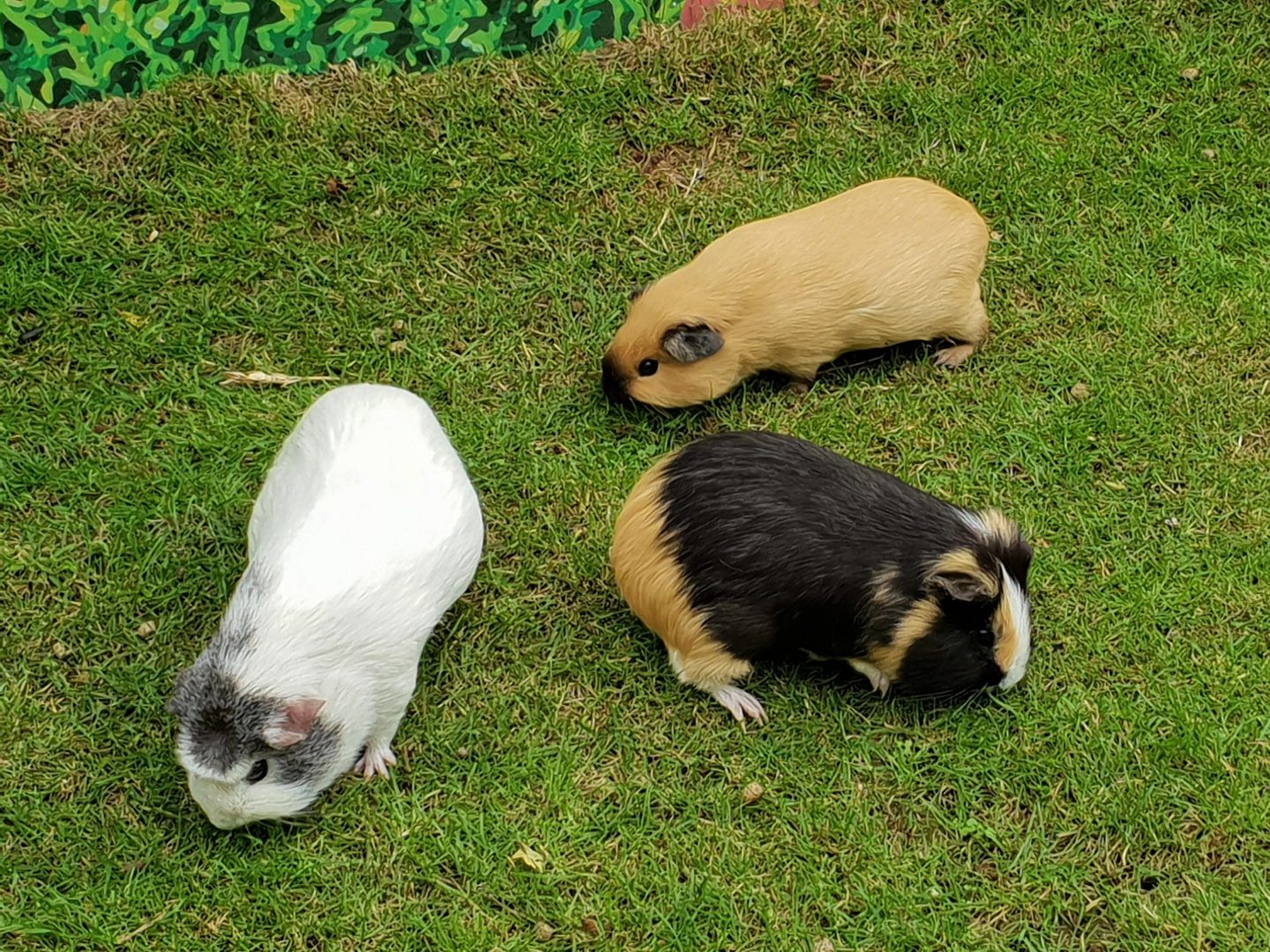 There are also rabbits, birds and fish. Autumn especially enjoyed the latter. 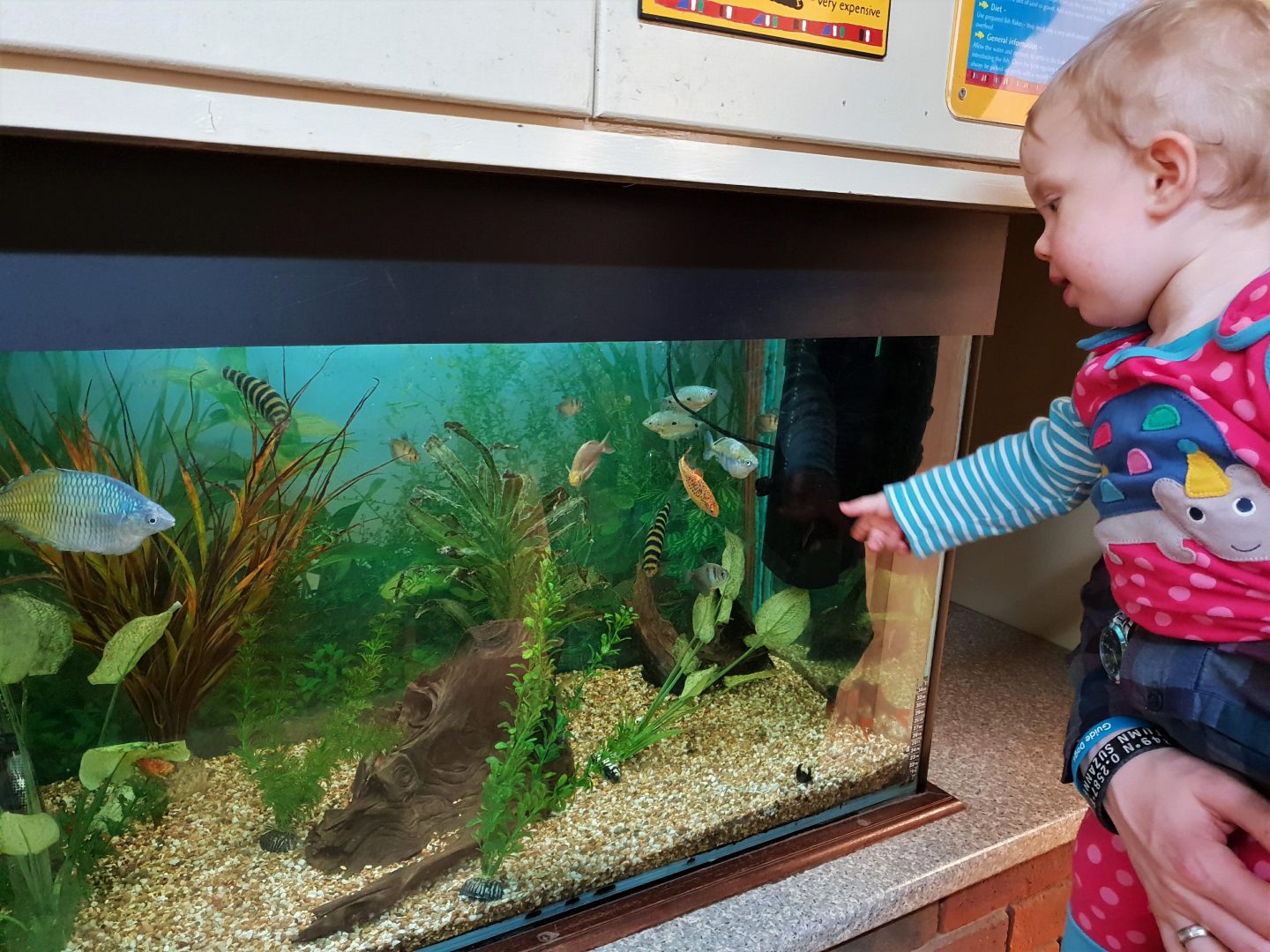 There are also somewhat more unusual pets such as tarantulas, snakes and iguanas!

For many of the animals at the park, you can go and watch their feeding times. You can also pay for an experience in which you look after some of the animals!

For more information on the animals you can see, visit Drusilla Park’s website.

What else is there to do?

There are lots of other things to do, including three rides in an area called Go Safari! This looks great, but is for children older than Autumn. It was very busy when we visited as it was the school holidays. Judging from the amount of noise coming from the rides, everyone was having a great time!

There is also soft play indoors and a couple of fantastic looking playgrounds. We didn’t visit them, however, as we were very conscious that time was ticking away and the M25 is no fun of an evening! Unfortunately, I’d had to work in the morning so we couldn’t get to Drusillas Park as early in the day as we would have liked.

As well as the playground, there was a water park area. The forecast didn’t look very good before we went, but it came out very hot and sunny in the afternoon. I really regretted not packing a swimming costume for Autumn as I know she’d have had a whale of a time!

The Safari Express Train caught Autumn’s attention when we saw it pass us as we were walking around the park. It’s a short ride of around 3 minutes in which you pass some animal enclosures and there are lots of animal themed joked on the way! Autumn seemed a little bewildered by it, but I think she really enjoyed the “choo choo” (as she called it). 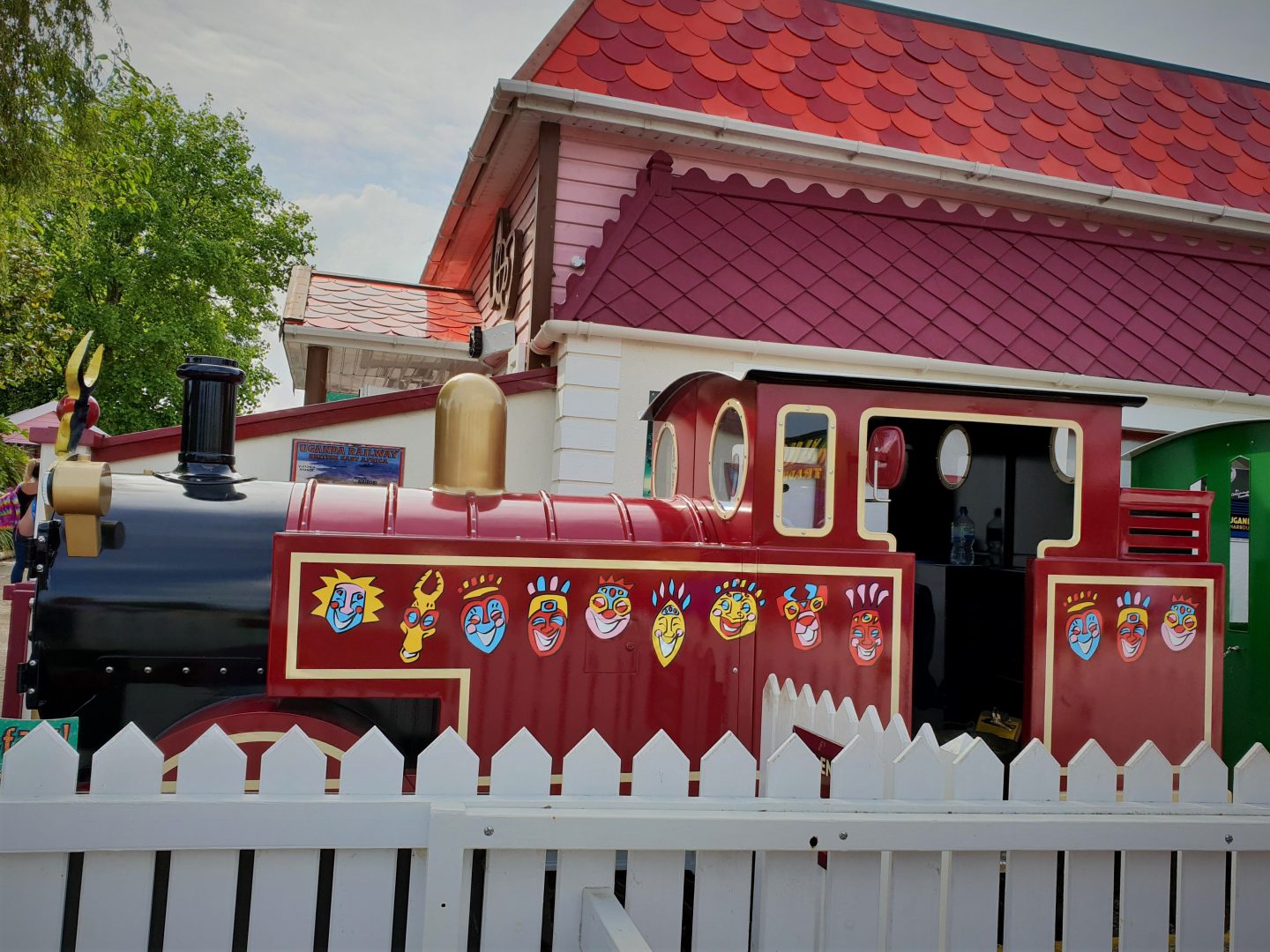 Last but not least, if you or your children are as big a fan of Hello Kitty as I am, you’ll also be pleased to know that Drusillas Park has the first permanent Hello Kitty themed attraction in Europe!

Hello Kitty’s house has a parlour where you can pay for children to have hair braiding, face painting or temporary tattoos!

On selected days throughout the year, you can also meet Hello Kitty herself! Autumn was so excited from the second she saw Hello Kitty and absolutely loved meeting her. 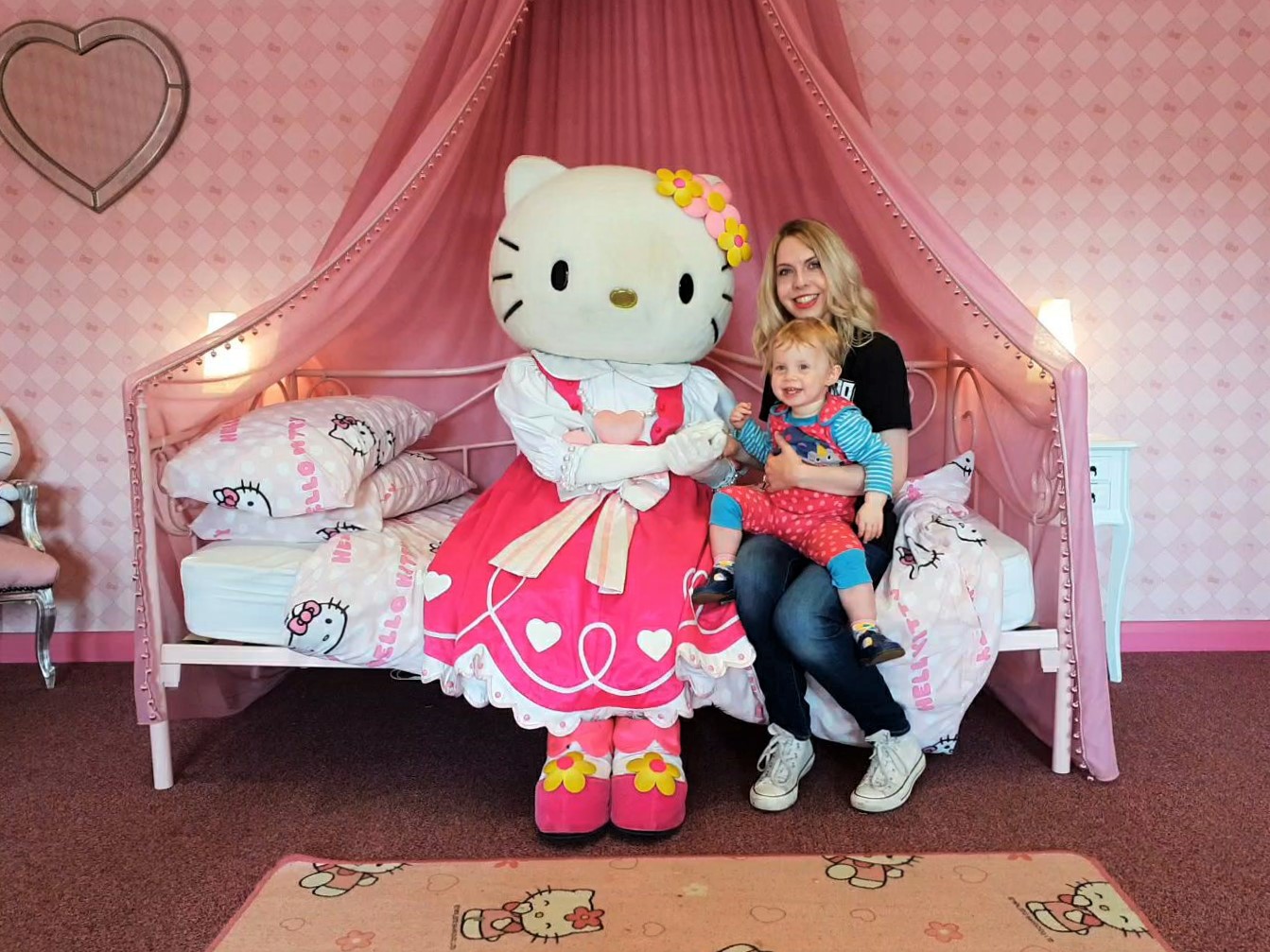 Autumn was delighted when Hello Kitty held her hand and tickled her face. She didn’t stop giggling! It was a lovely experience. 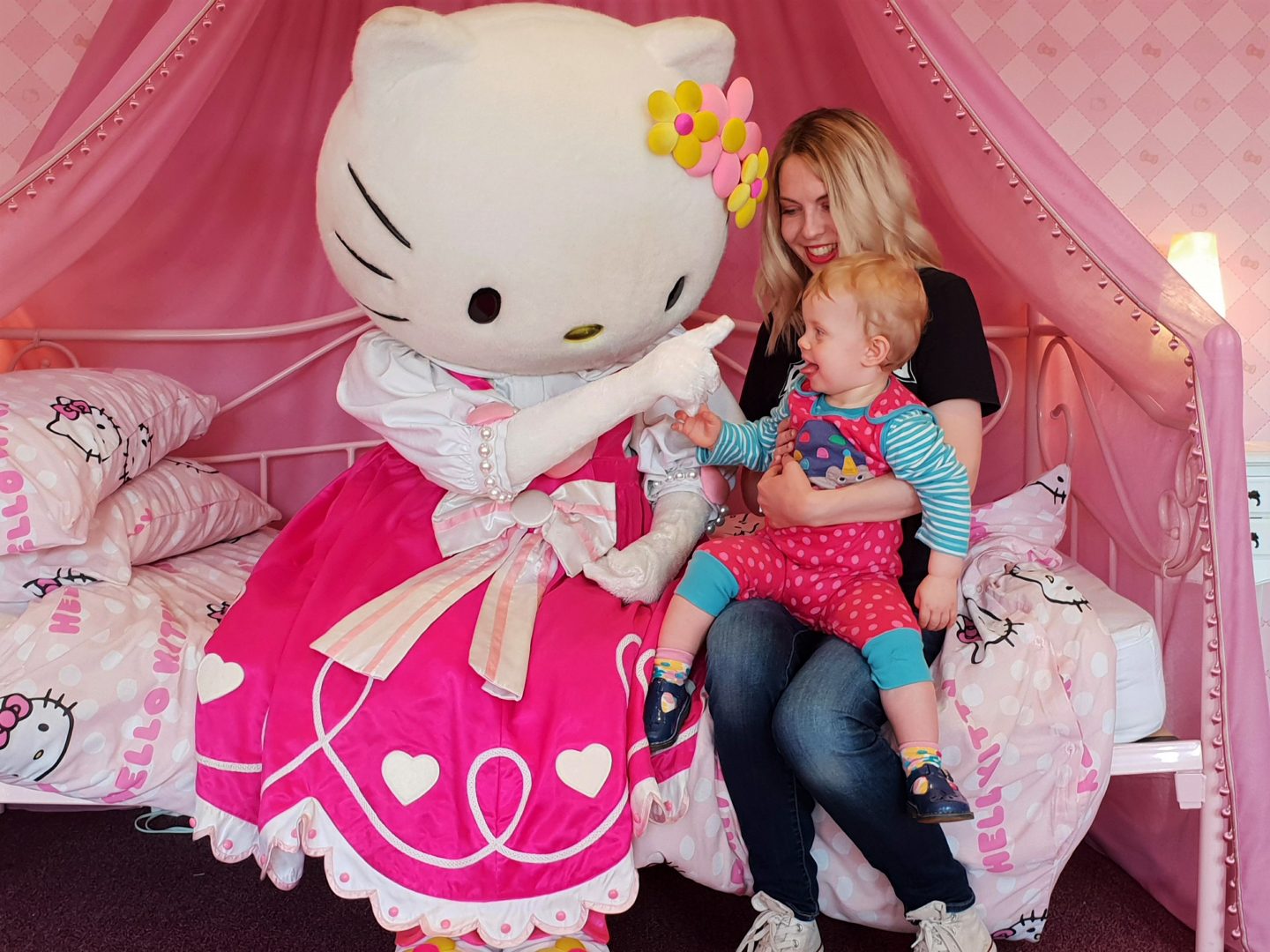 The secret garden is beautiful! There’s a little shed with a bench, which is a perfect photo opportunity! 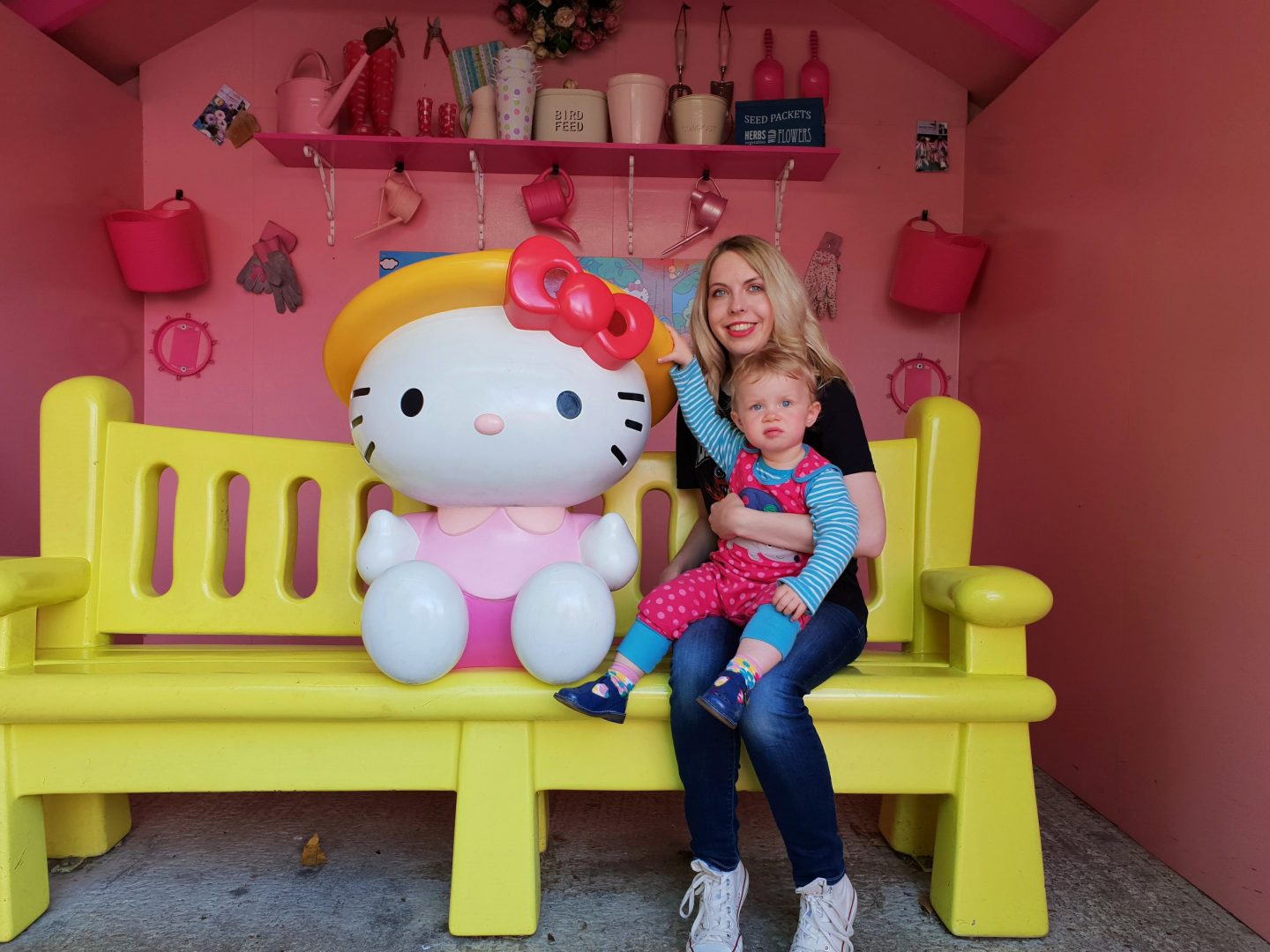 In the garden itself, there are three rides: a hopper, a car ride and a tea cup ride. Autumn is too small for the hopper and tea cup rides have always made me too dizzy, so we went on the car ride! It was all so pretty and we both really enjoyed it so much that we didn’t stop at one ride. I think Autumn could have happily gone round on it for hours! 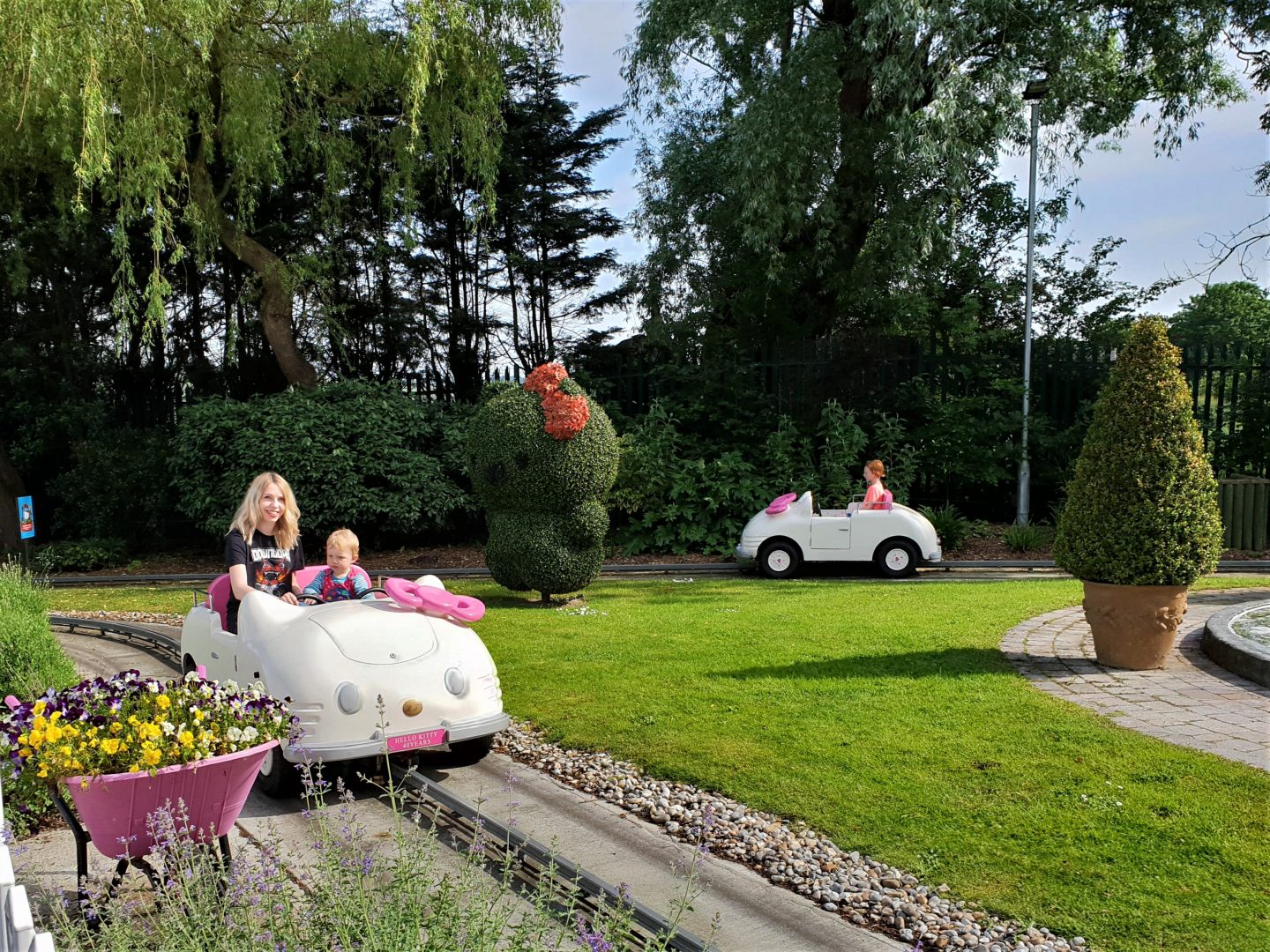 Where can I eat?

There are several cafes at Drusillas Park, which look lovely! There are also a couple of picnic areas if, like us, you bring a packed lunch.

I was pleased to find that there are several gift shops, rather than just one at the end unlike most places I’ve visited. This means that the people in them are less concentrated and you don’t have to worry about getting to the end of the park in time to go to the gift shop.

Choosing Autumn a ring-tailed lemur like the one we’d made friends with earlier, I winced before looking at the price tag. However, it was a pleasant surprise to find that the gift shop wasn’t overpriced like most similar attractions! As well as animal cuddly toys, there were also Hello Kitty cuddly toys as well as stationary, ice creams and drinks available. Each shop and what it stocks is slightly different, however. 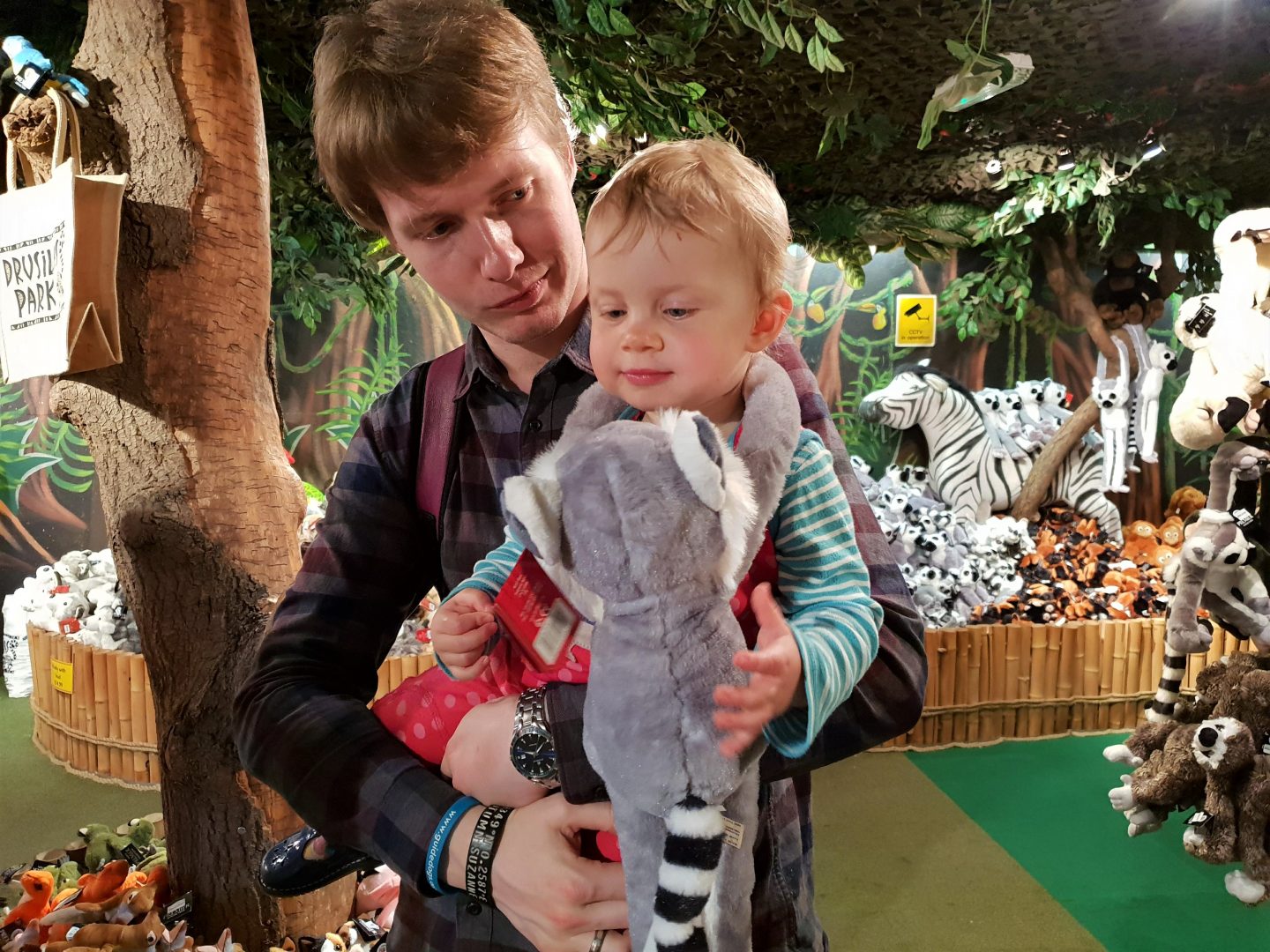 We had an absolutely wonderful day and I hope to make many more visits during Autumn’s childhood!

You may be interested in watching this short video I made of our day:

To find out more about opening times, prices and events throughout the year, please visit Drusillas Park’s website.

Disclosure: We were invited to Drusillas Park for a press day in return for this review. As always, all views and opinions are honest and my own.