In recent years, it has become very popular to go pumpkin picking in the weeks leading up to Halloween. There are several in Kent, but the most local to us is PYO Pumpkins at Beluncle Farm in Hoo, Rochester. Entry is free, there’s ample parking, there are toilets and refreshments and they even accept card payments! They also support Crohn’s & Colitis UK and CICRA, causes close to the organiser’s hearts as their son suffers from Crohn’s disease.

I visited them for the first time in 2015 with two of my best friends. However, after the birth of Autumn last year, I decided to start a family tradition!

Last October, Autumn was seriously ill and the weekend we went pumpkin picking, we weren’t sure whether she’d need an operation on the Monday or not. As she was only 5 weeks old, I was worried about what the extent of the surgery required may be and whether there was a possibility of losing her. Although I was very ill myself at the time, I decided that along with my family, I’d go to Beluncle Farm and try my best to have a good day.

We had a fantastic afternoon and Autumn looked so cute perched on top of the pumpkins in her little pumpkin outfit. Please excuse how awful and ill I look in this photo: 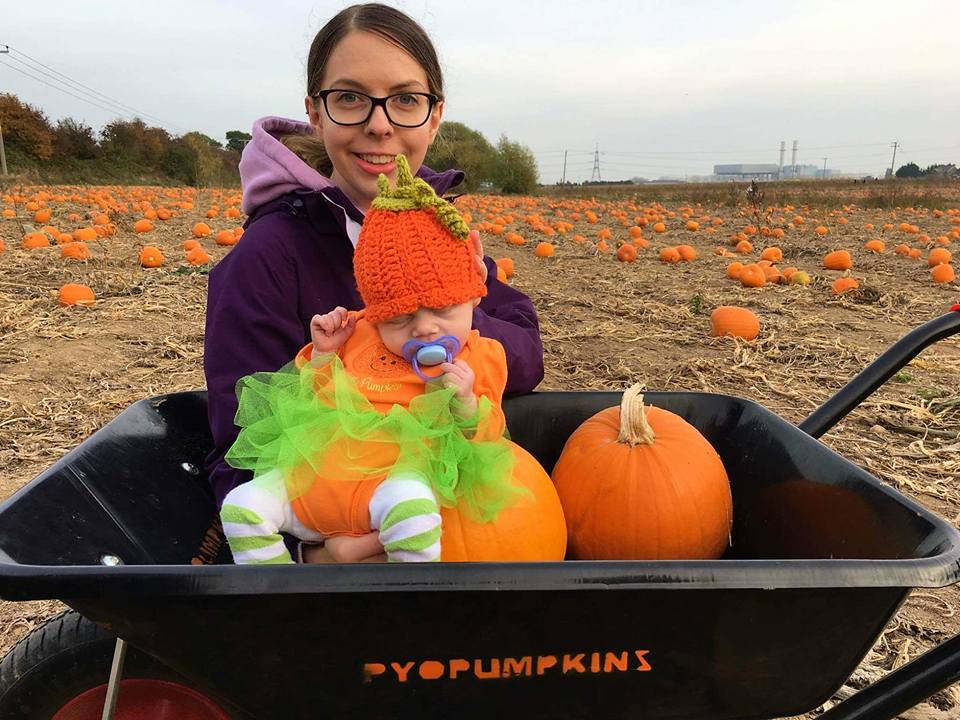 We managed to get the same outfit for her this year – just look at the difference a year makes! 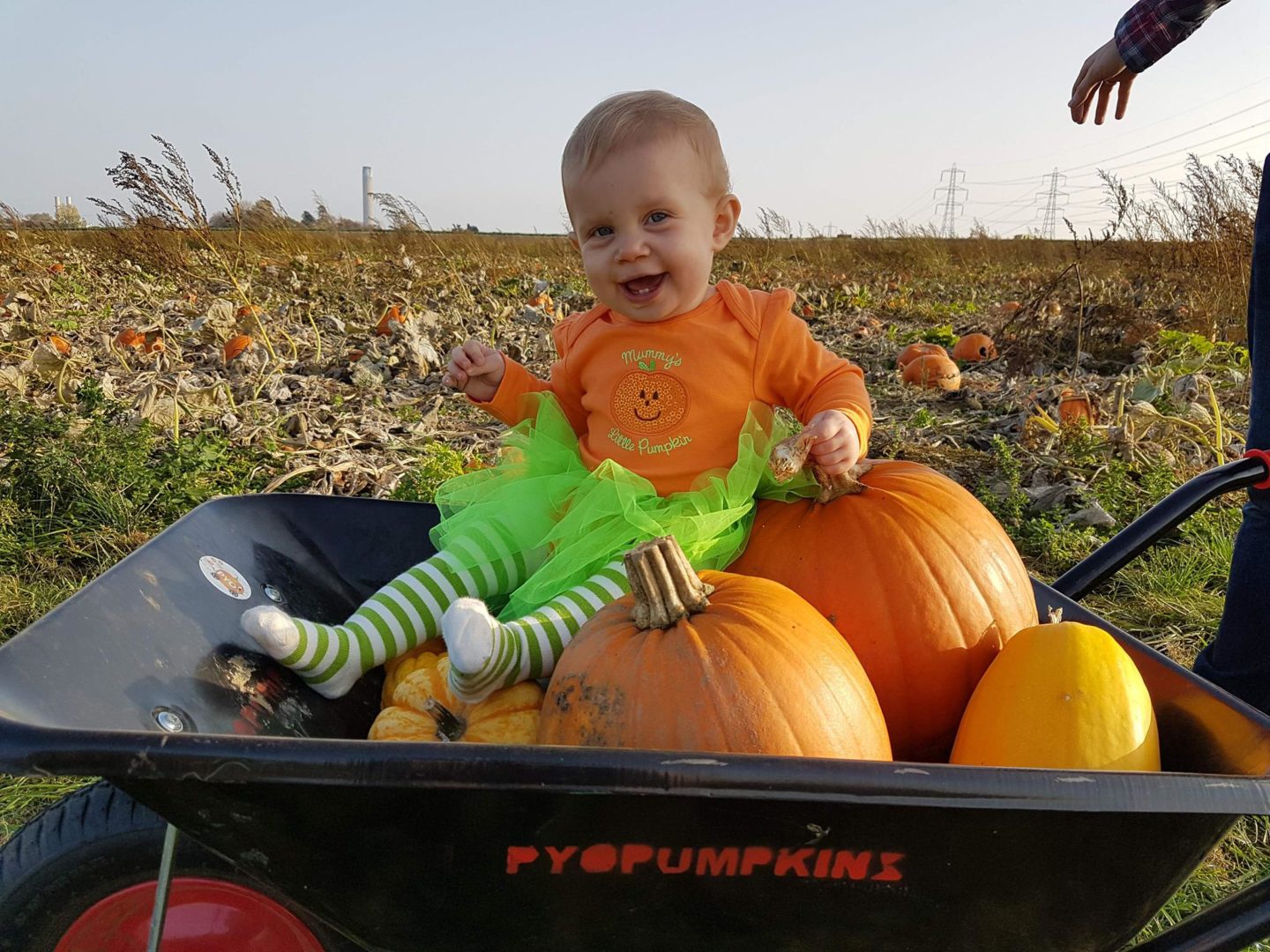 One of the things I was most surprised about when I first visited PYO Pumpkins was the variety! I was just expecting a small field with a few of your typical orange pumpkins. However, that was not the case! They are so popular that they have two huge fields full of pumpkins. As well as the type you’d expect, there are several other varieties in various colours and sizes. There are also different kinds of squashes, maize and gourds waiting to be picked up and put in your wheelbarrow too!

In this photo you can see spaghetti squashes and white pumpkins, as well as the spooky caravan in the background! Inside there are cobwebs and skeletons, which are sure to give young children a little spook! 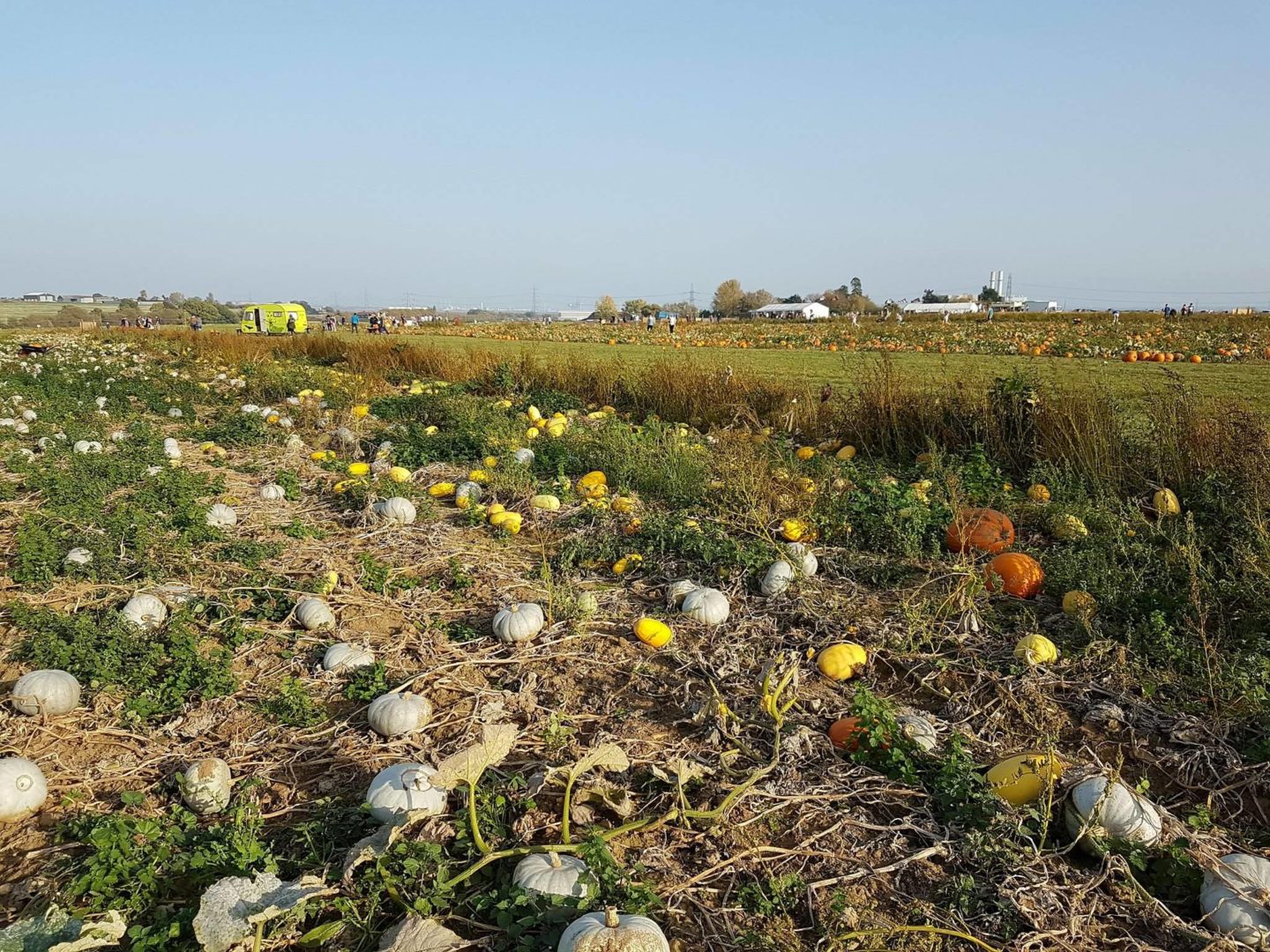 From this sign positioned next to one of the fields, you can see the sheer variety of pumpkins available: 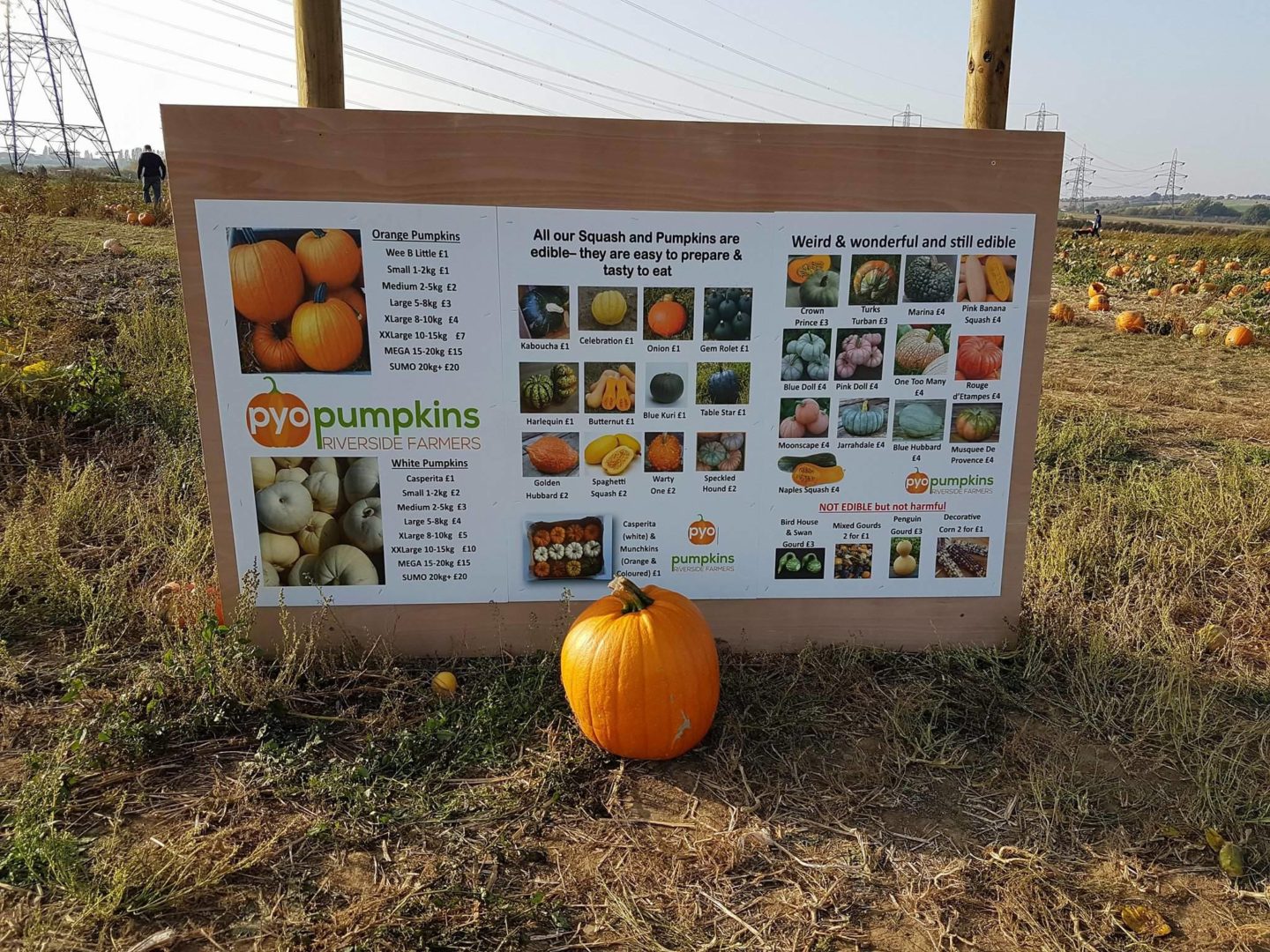 Oh, and just look at this giant squash I found! 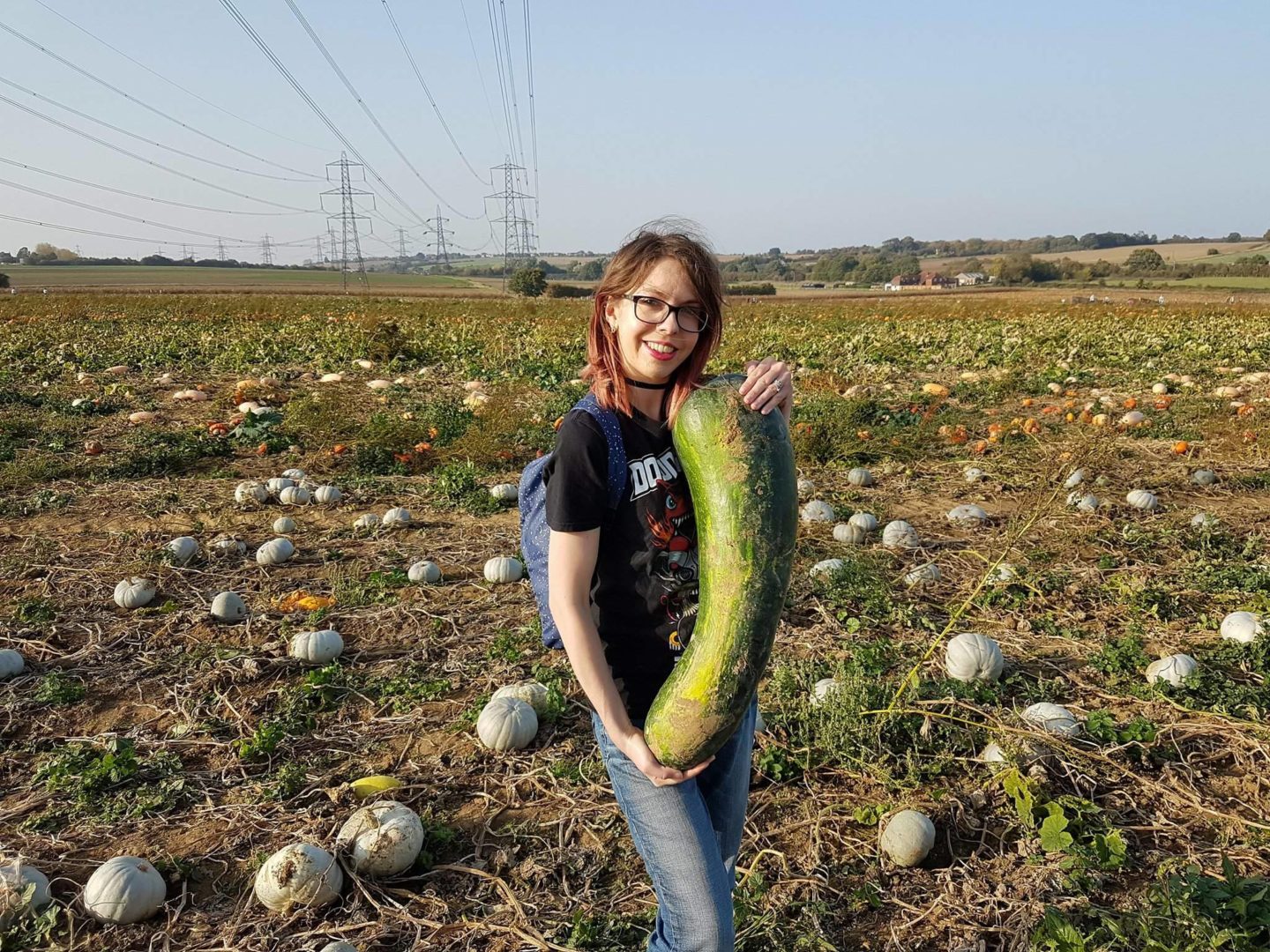 By the end of our visit, we had quite an impressive haul. There are huge wooden boxes full of pumpkins at the end. As such, if you didn’t find some types on your ventures across the fields, you can pick them up there!

I’m still working out what to do with our squash and pumpkins. I think I’m going to make a nice dinner with the squash using mozzarella and tomatoes. As for the pumpkins, we’ll probably carve some and make some soup and perhaps a pumpkin pie! Fortunately, PYO Pumpkins have some fantastic looking recipes on their website here! 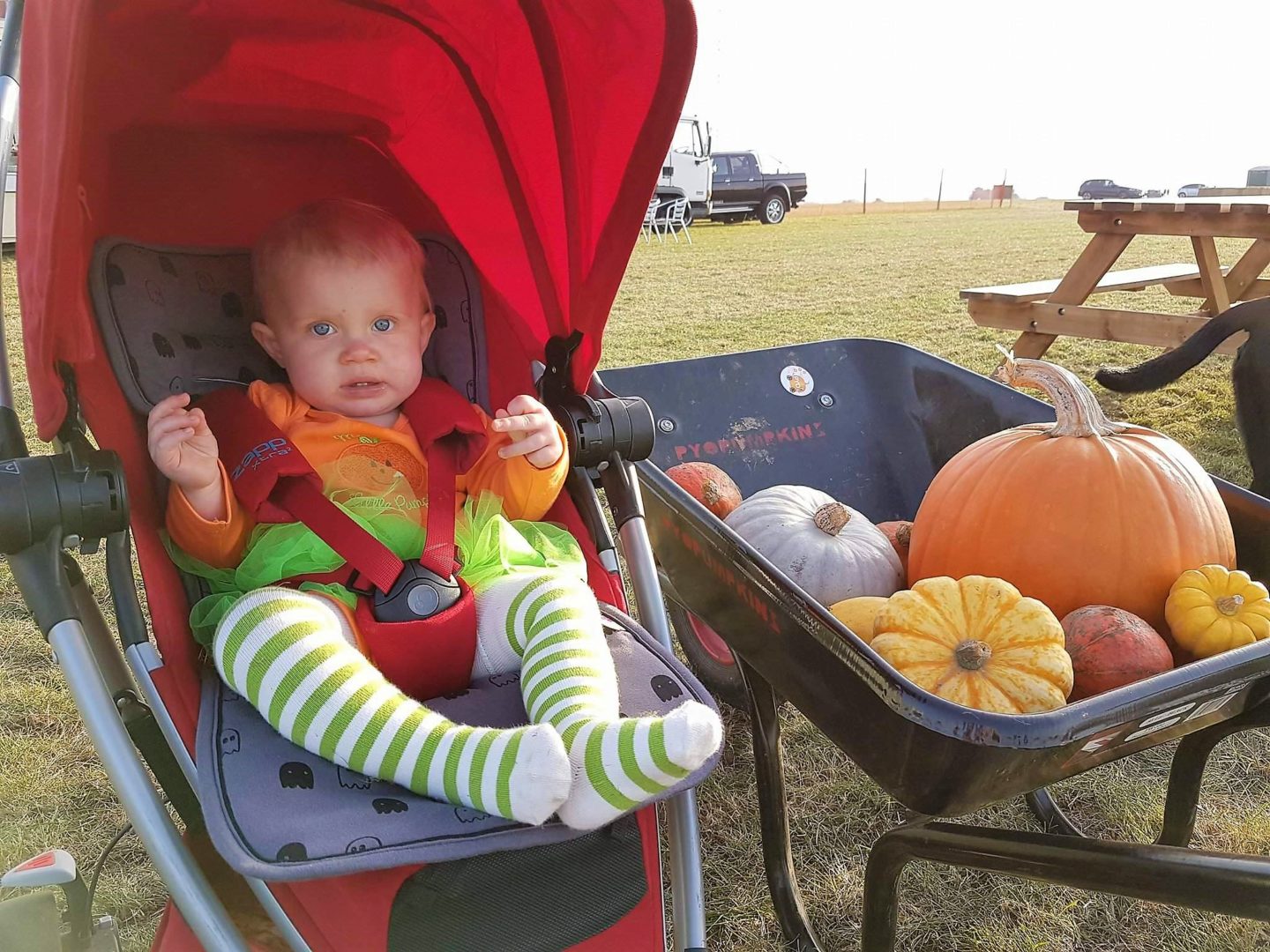 There are portaloos in the field at PYO Pumpkins and I believe there are proper toilets in the farmyard.

Food and drinks are available from a burger trailer. I had some chips, but as someone who is still largely vegetarian, I can’t tell you what the burgers were like. I believe they’re the same people as last year, though, and my family seemed to like theirs when we went in 2016. 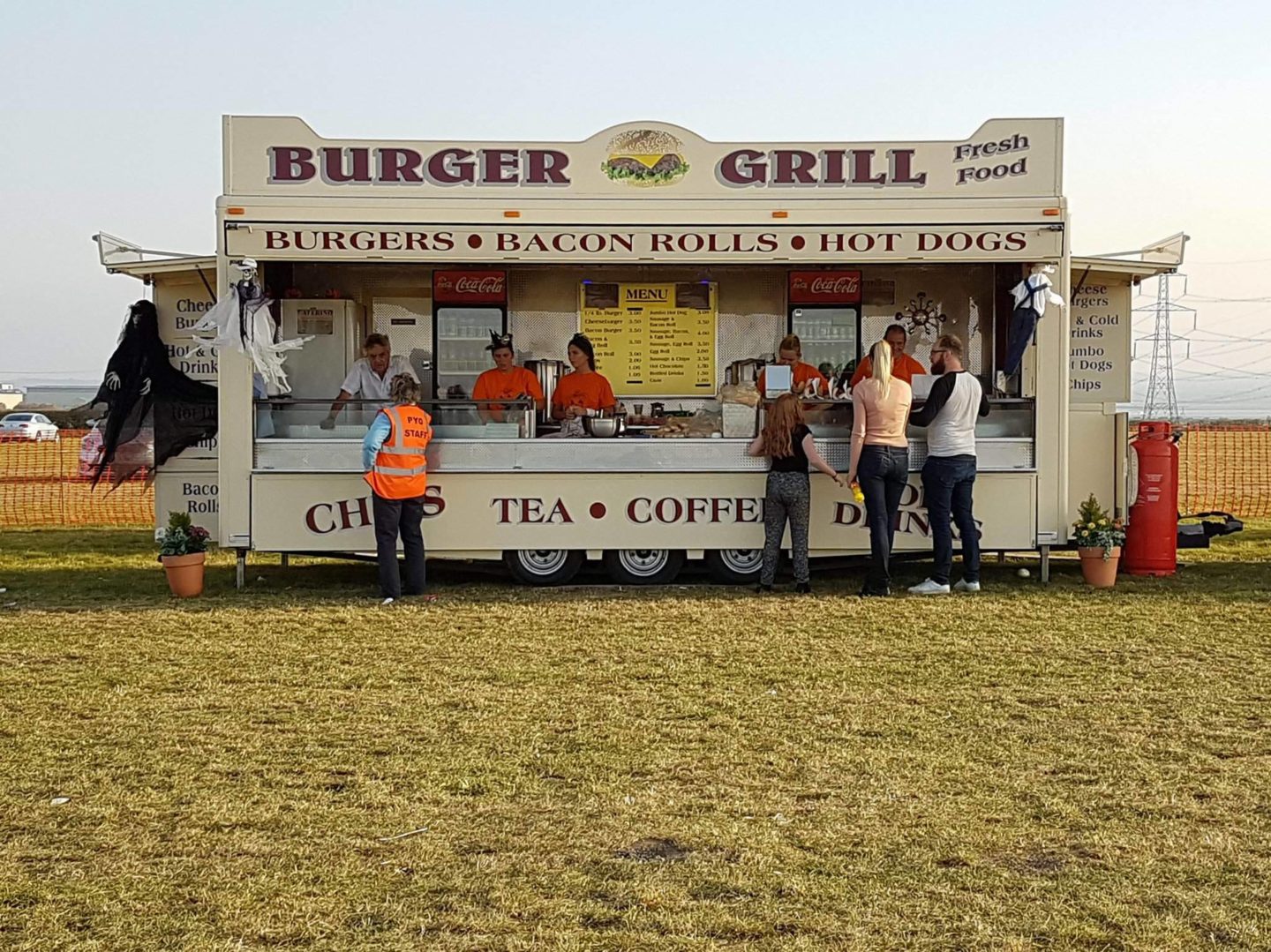 The fields are very open and the wind seems to blow right across the Hoo Peninsula from the River Medway. All of my photos are terribly windswept, but fortunately it was very mild when we visited. In previous years, I’ve worn hoodies or jumpers with a windproof jacket over the top.

Of course, sensible footwear is needed as you’re walking across bumpy fields. If it’s rained fairly recently it can get very muddy, so you’ll need wellies or walking boots. If it hasn’t, like when we visited this year, trainers should be fine as long as you don’t mind a little dirt!

As soon as you arrive, there are some hay bales with a carved pumpkin to the side. Taking a photo there with the orange pumpkins in the field behind you makes a great photo. Naturally, the other fields and kids (and big kids) with wheelbarrows make great pictures too.

As with previous years, there was also a display where you could have photos taken. It looked brilliant, but unfortunately by the end of the day it was right opposite the sun. This meant it was impossible to take a decent photo due to the strength of the sunlight and sun getting in our eyes! 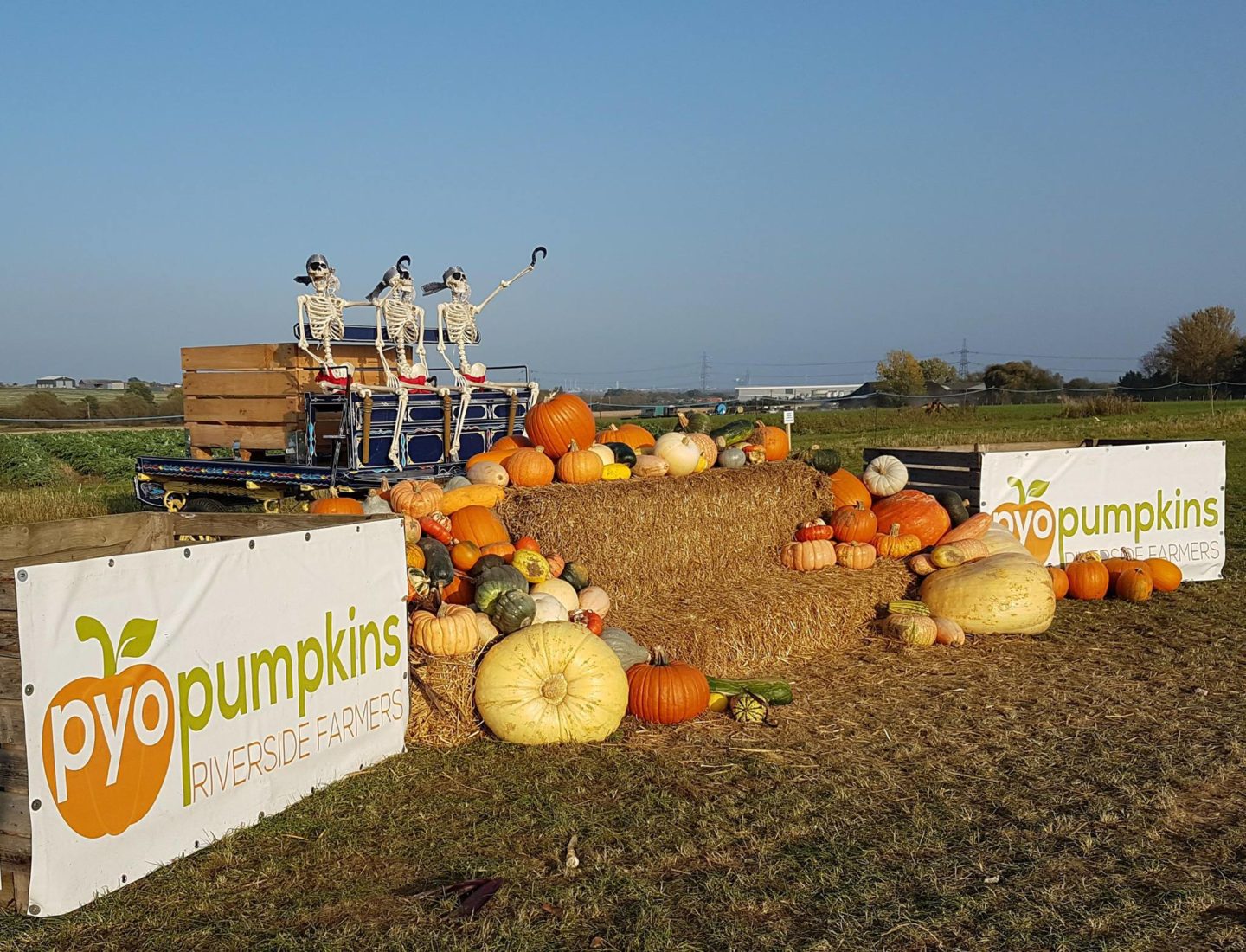 I’m sure that it will be fine on days that it’s cloudy (which will probably be most, it is October after all!) However, Autumn had fun sitting on the hay bales and looking at all the pumpkins on the display. 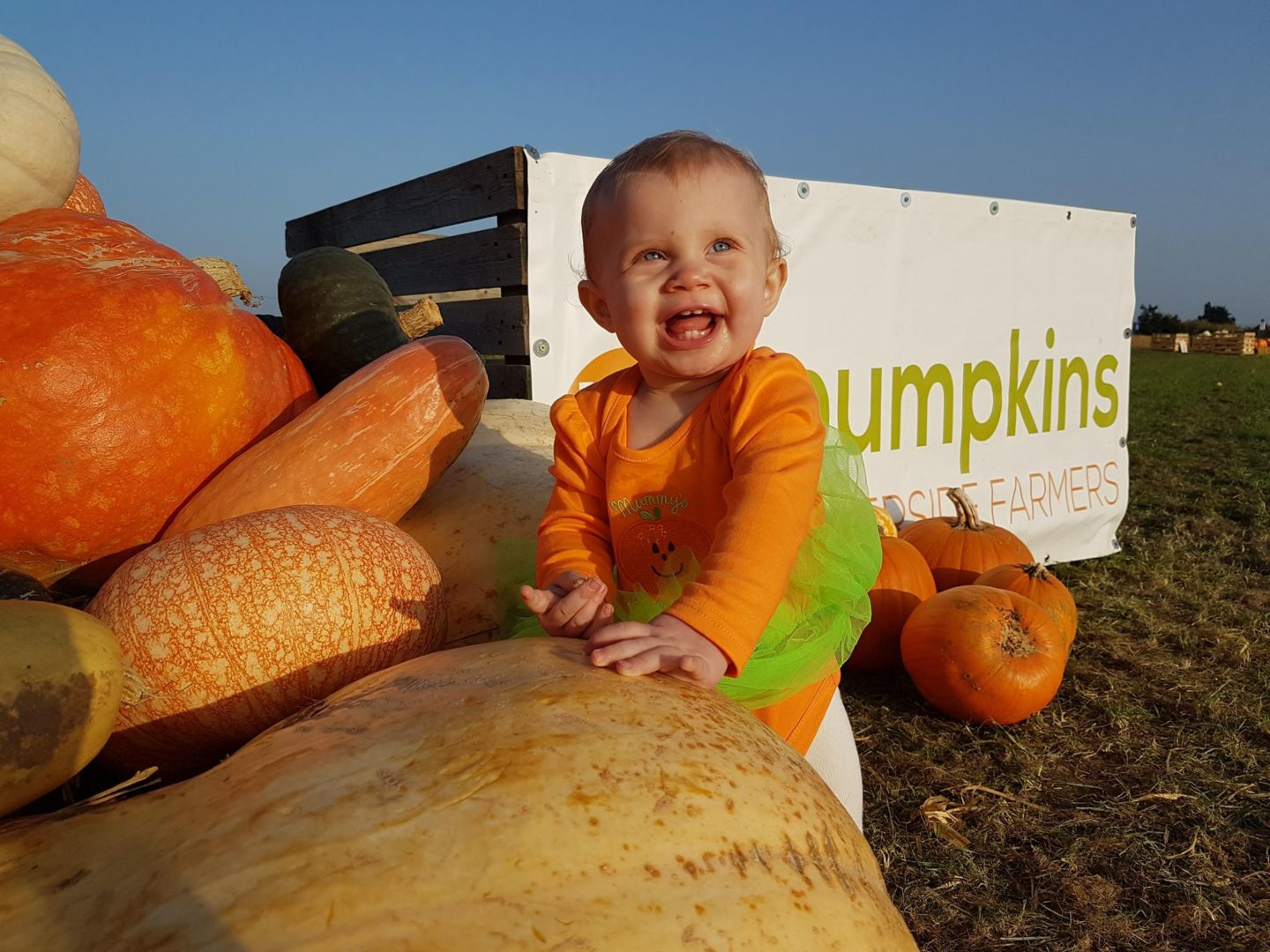 Every single year, this pumpkin farm has been great, no matter who I’ve gone with! Now that we can make this a tradition with Autumn, I’m enjoying it even more. Seeing our very own little pumpkin being so happy and well compared to last year and looking at everything was so wonderful. She found the pumpkins really interesting and had a whale of a time – there was so much laughter! We even gave her a tiny pumpkin of her own, which she adored: 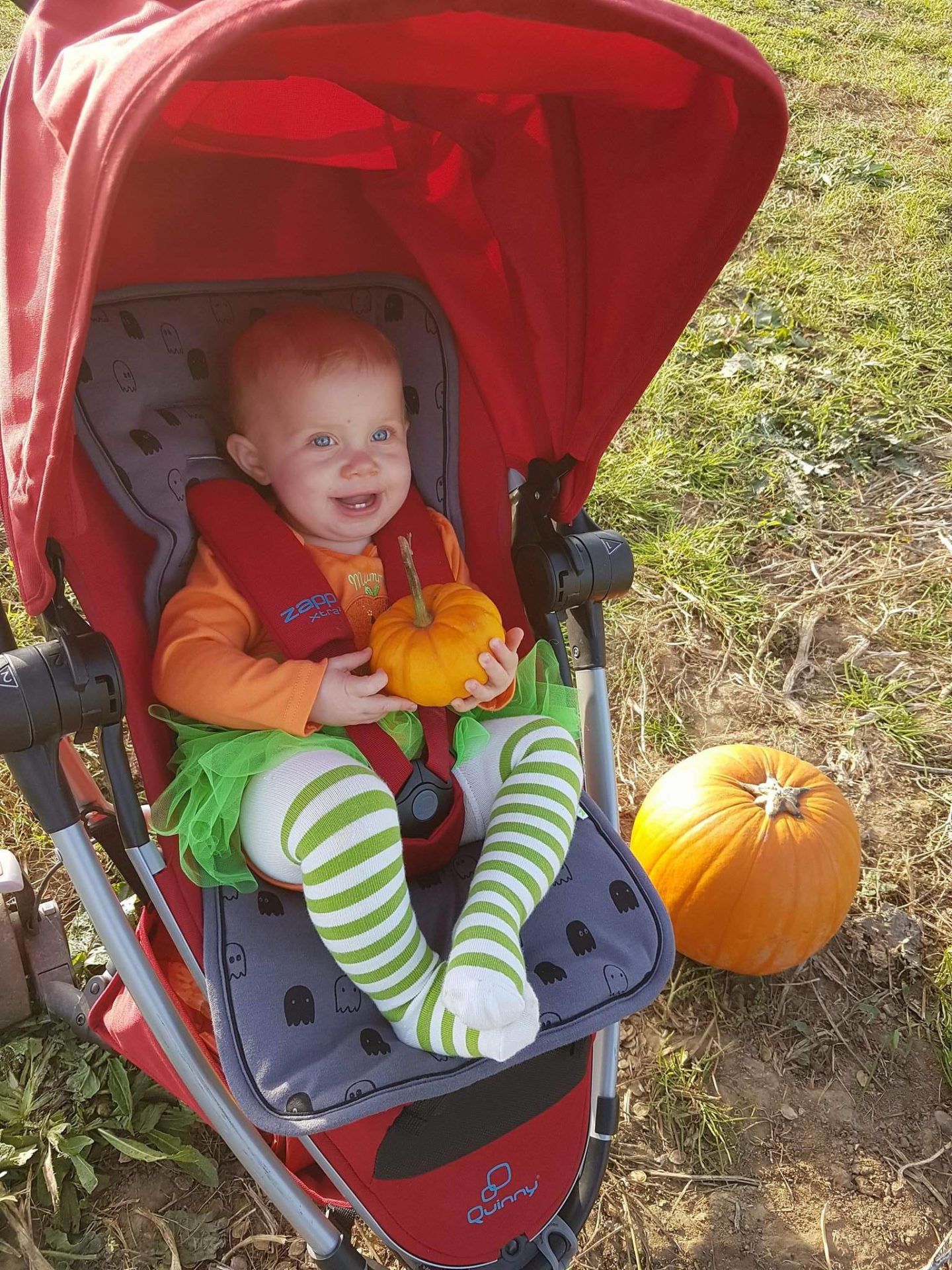 Picking times for Beluncle Farm are:

You can find them at:

One last photo? Oh, go on then… 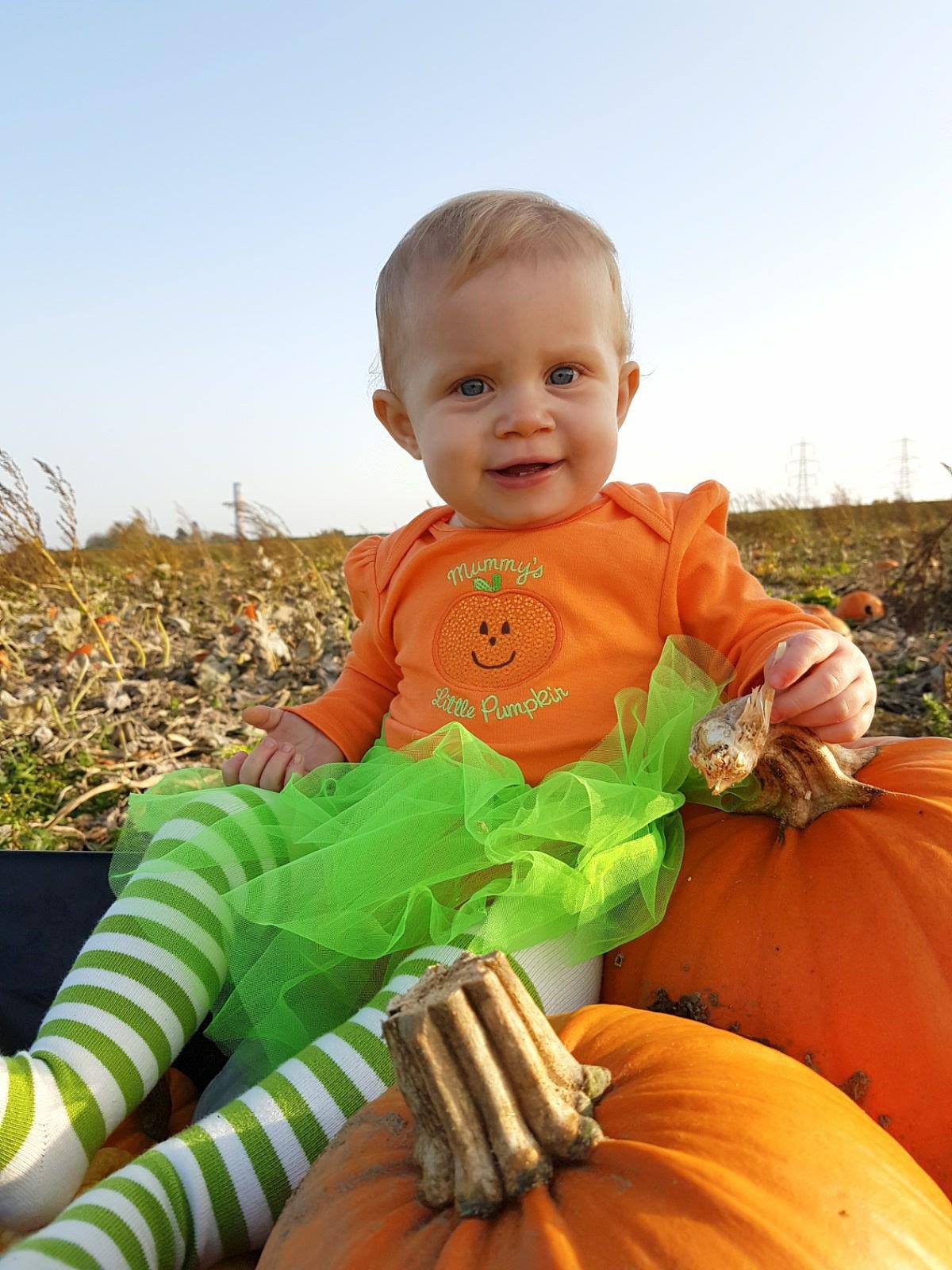 Disclaimer: This post was not written in collaboration with anyone. As always, all views are honest and my own.

Have you been to a pumpkin farm yet this year? Let me know in the comments below! 🙂

How to Not “Outsource Your Health” When Starting a Business

5 steps to being happy – International Day of Happiness