Day three of our midweek break at Bluestone was arguably the day that I’d been most looking forward to! Unfortunately, when it arrived, we were all a bit tired and grouchy. Autumn had had a bad night with her teething and we felt the effects too.

However, we were looking forward to our activities for the day. Dave was booked in to go tree climbing in the morning. In the afternoon, we were booked in for Christmas activities! First, we were going to be taking a trip to Elftopia (Kingdom of the Elves). Afterwards, we were going to visit Santa’s Workshop. We were already feeling incredibly festive from all the Christmassy signs around the park and the Christmas lights in the village.

We started our day in the village for the Advent countdown. Each morning, a couple of the elves have a sing-a-long where there are prizes to be won. At the end, they announce how many days it is until Christmas! I imagine this is more and more exciting the closer you get to Christmas. 30-something still felt like quite a large number when we visited!

Autumn seemed to really enjoy dancing along to it, although she whined about having to wear a coat. 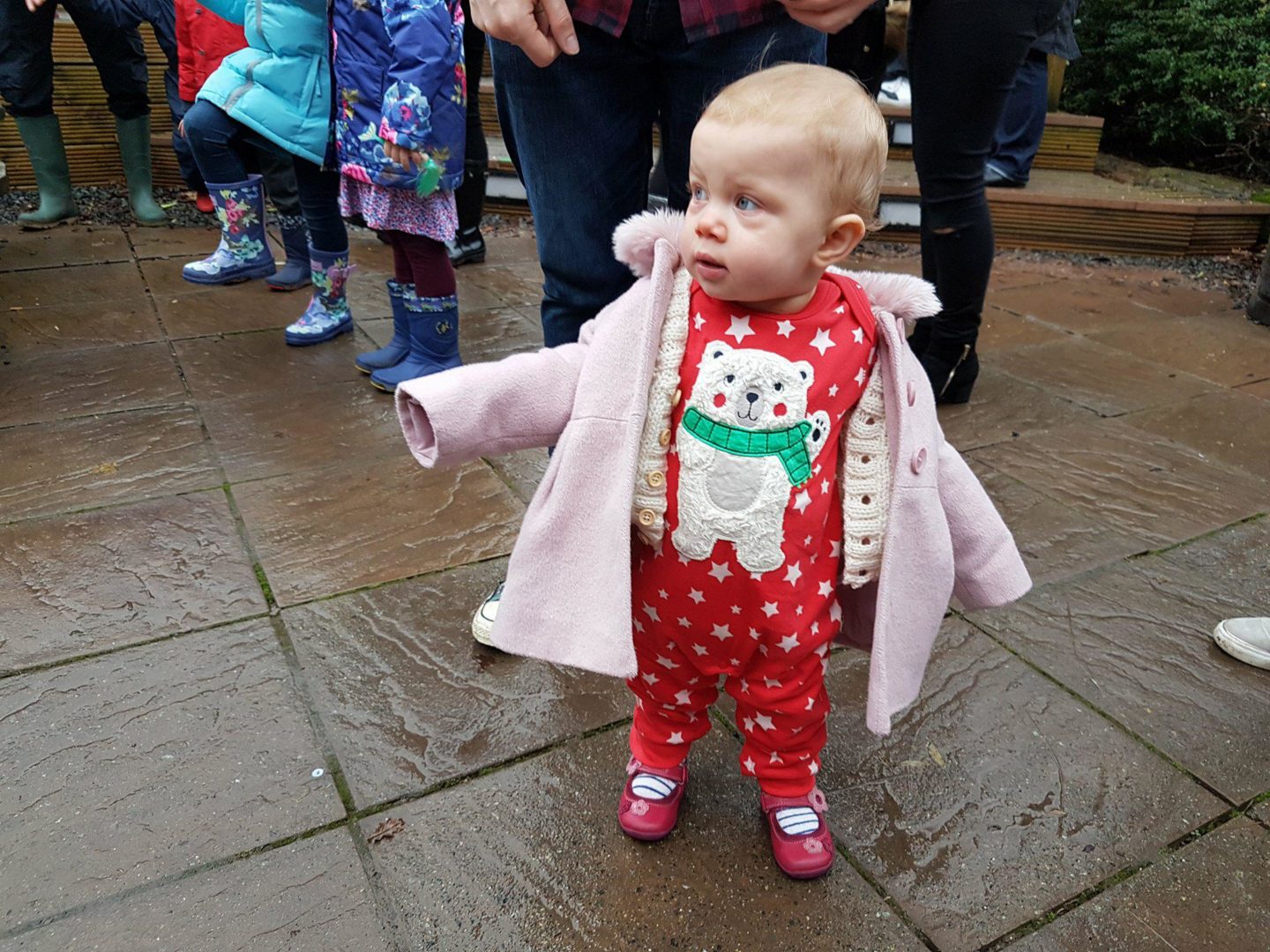 You can see just how tired she was! 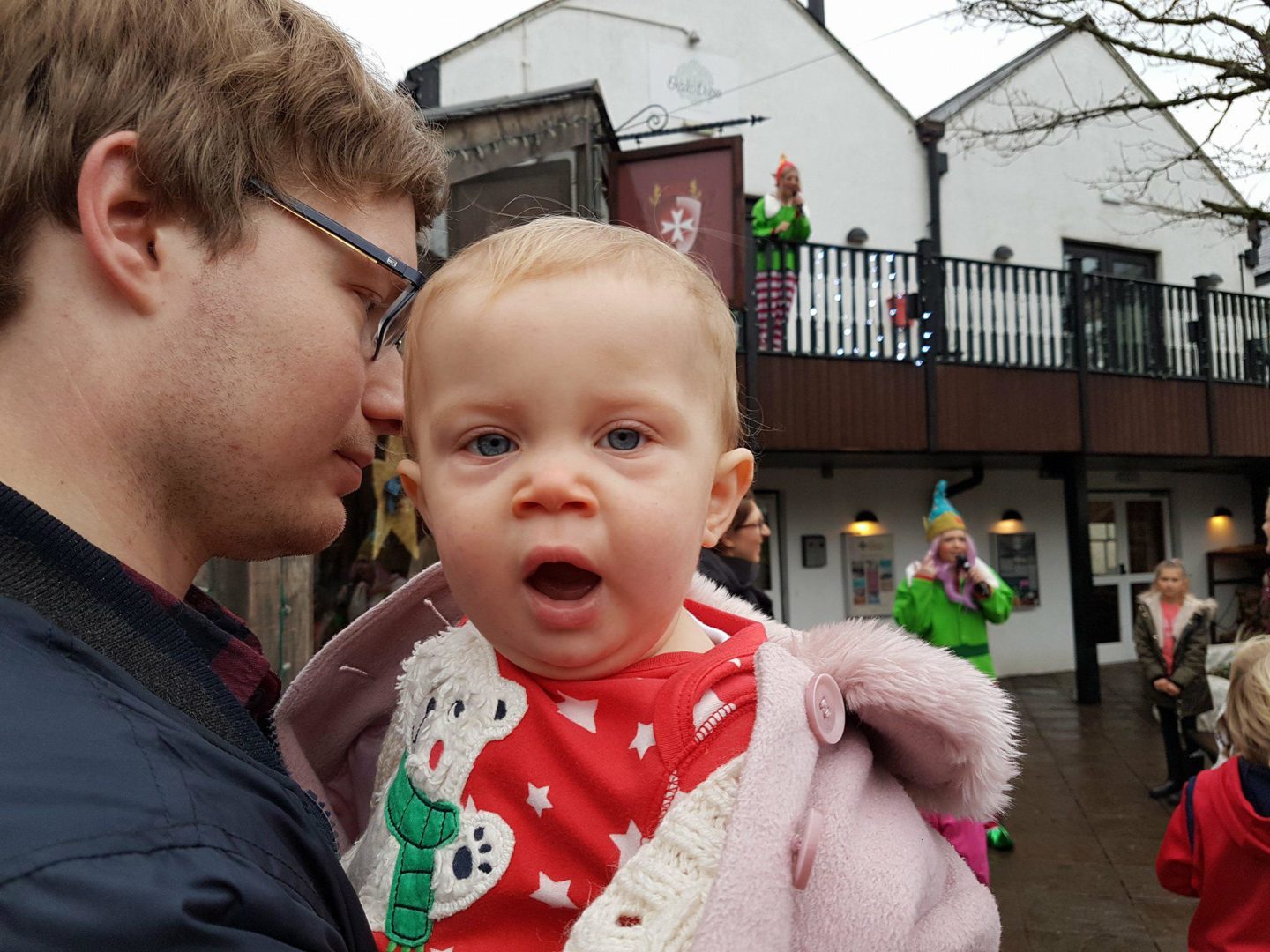 Dave had had a phone call shortly before 9am to say that he couldn’t do tree climbing due to weather conditions. To be honest, we’d woken up to torrential rain and howling wind outside and thought that may be the case! Instead, he was booked in for wall climbing at the Adventure Centre. He had great fun, although when booking he had forgotten his slight fear of heights! 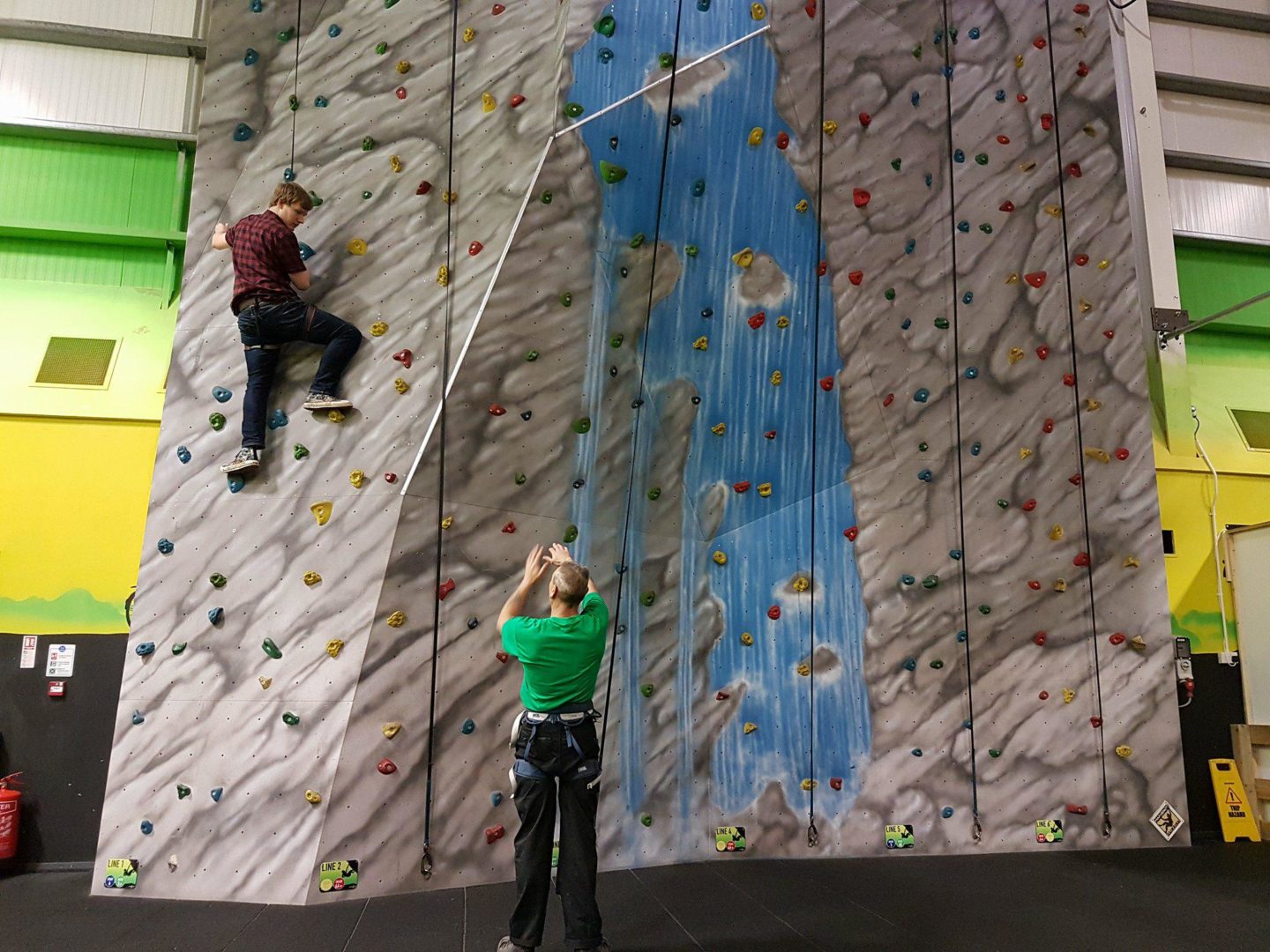 We watched him for a while and played a bit at the Adventure Centre. However, Autumn was far too grouchy and didn’t want to play ball with anything. I planned to catch the Land train and get her down for a nap. However, she threw a massive tantrum in the doorway of the Adventure Centre and refused to get up. She’s getting quite heavy for me now, so I have difficulty getting her up! I managed to get her outside and up the first bit of path. Then she spotted a golf buggy and wanted to chase after it. I picked her up and, of course, she started screaming. As I got half way along the path, I saw the Land train. Great. Thanks Autumn!

I really should have taken the pushchair as I then had to take a 15 minute walk with a toddler who either walked very slowly and didn’t want to walk in the right direction, or hold a howling toddler. Neither are my idea of fun, particularly! I decided we’d go to the playground in the village and wait for Daddy. I did get some smiles while she was on the swing. 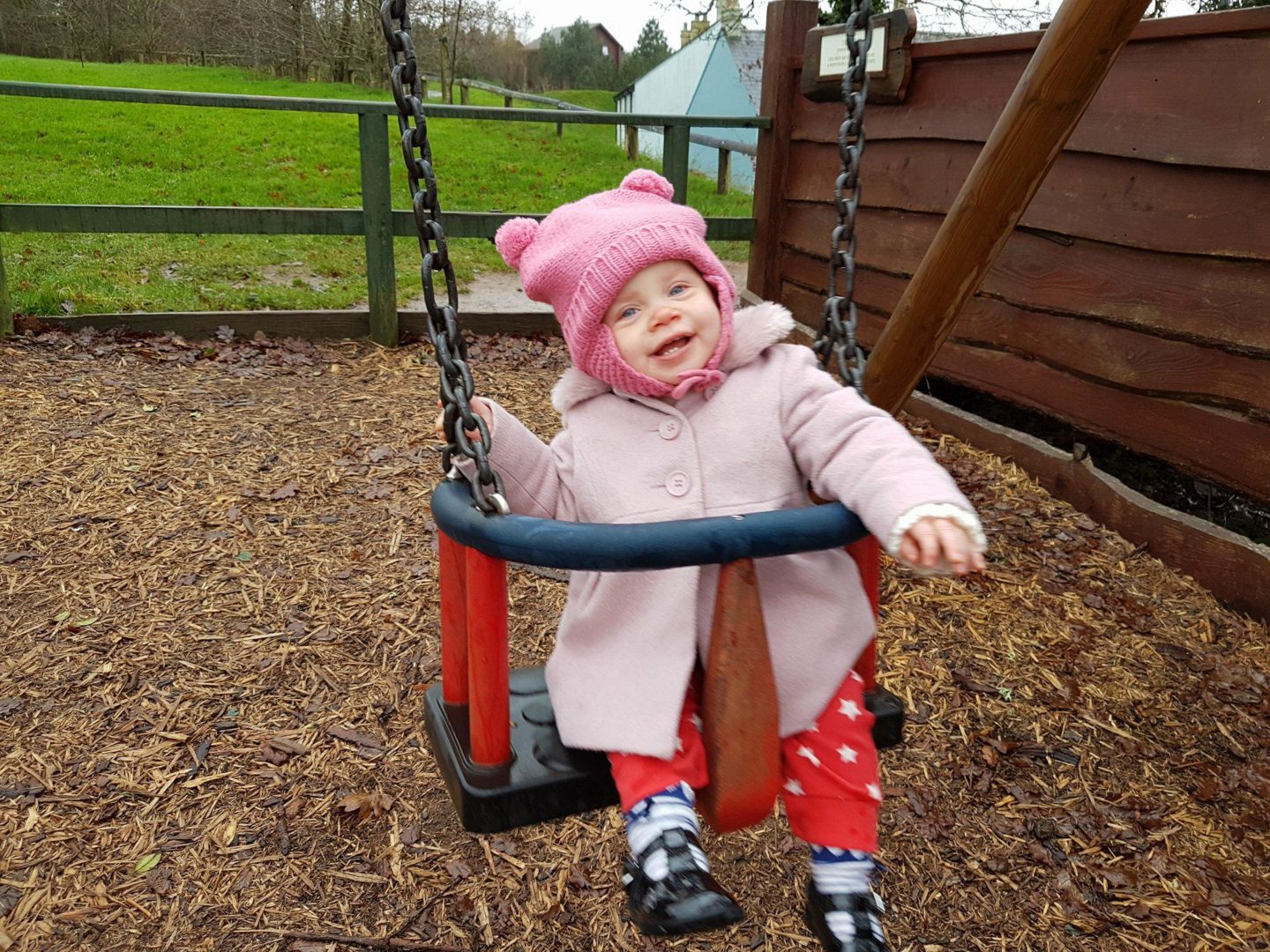 However, she was mainly just grumpy and wanted to do her own thing. 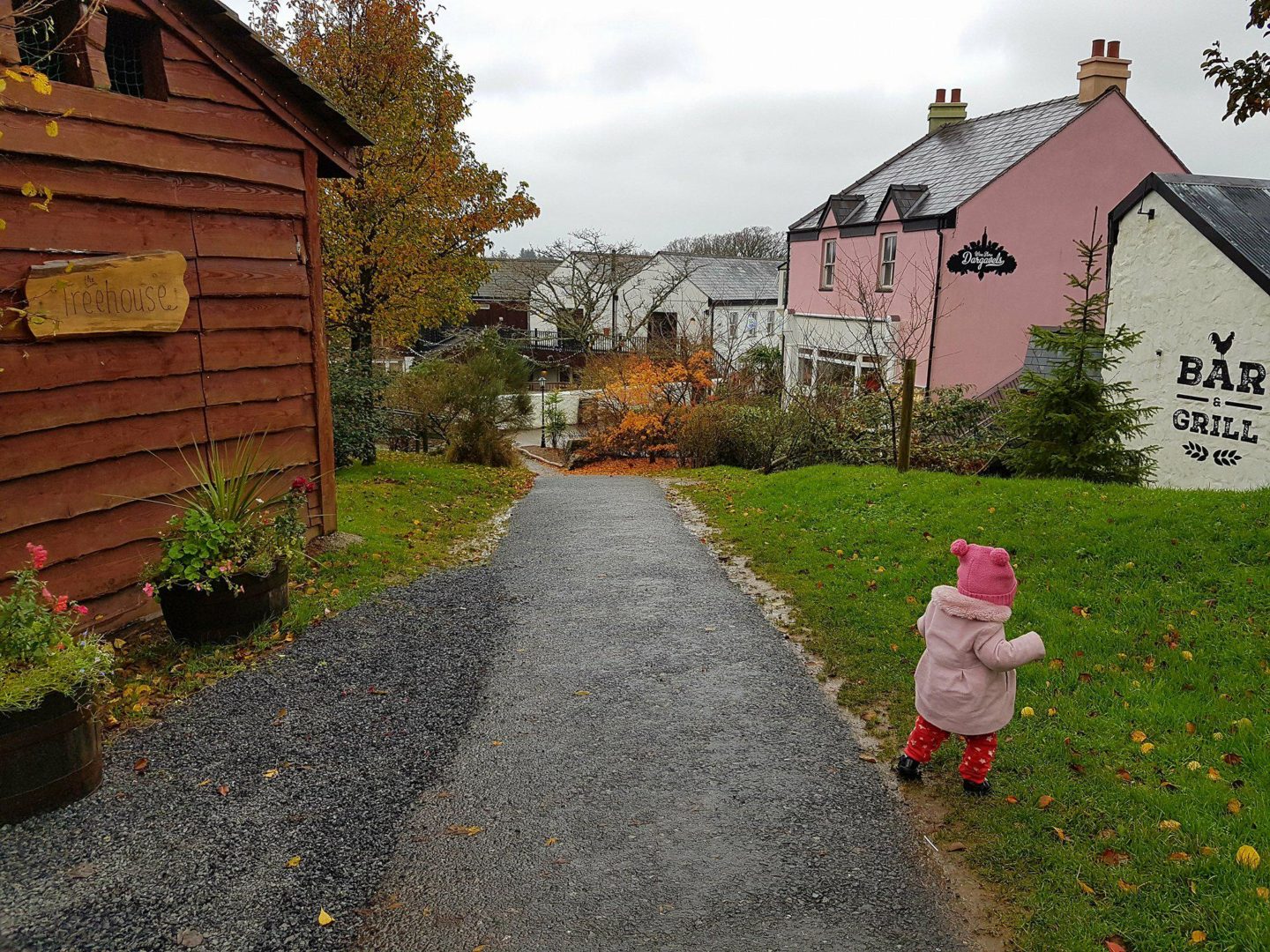 We managed to get Autumn down for a nap, eventually. She found it hard to sleep as she coughs a lot from excess saliva when she’s teething. Dave and I had some soup to warm us up. We watched it raining cats and dogs outside and felt very relieved that our activities for the day were all indoors!

Once Autumn had woken up and we’d all eaten, we caught the Land train back up to the Adventure Centre. Our journey started at Passport Control. There, we were issued with a passport and all given our red elf cheeks. All elves need red cheeks and a big smile, after all! 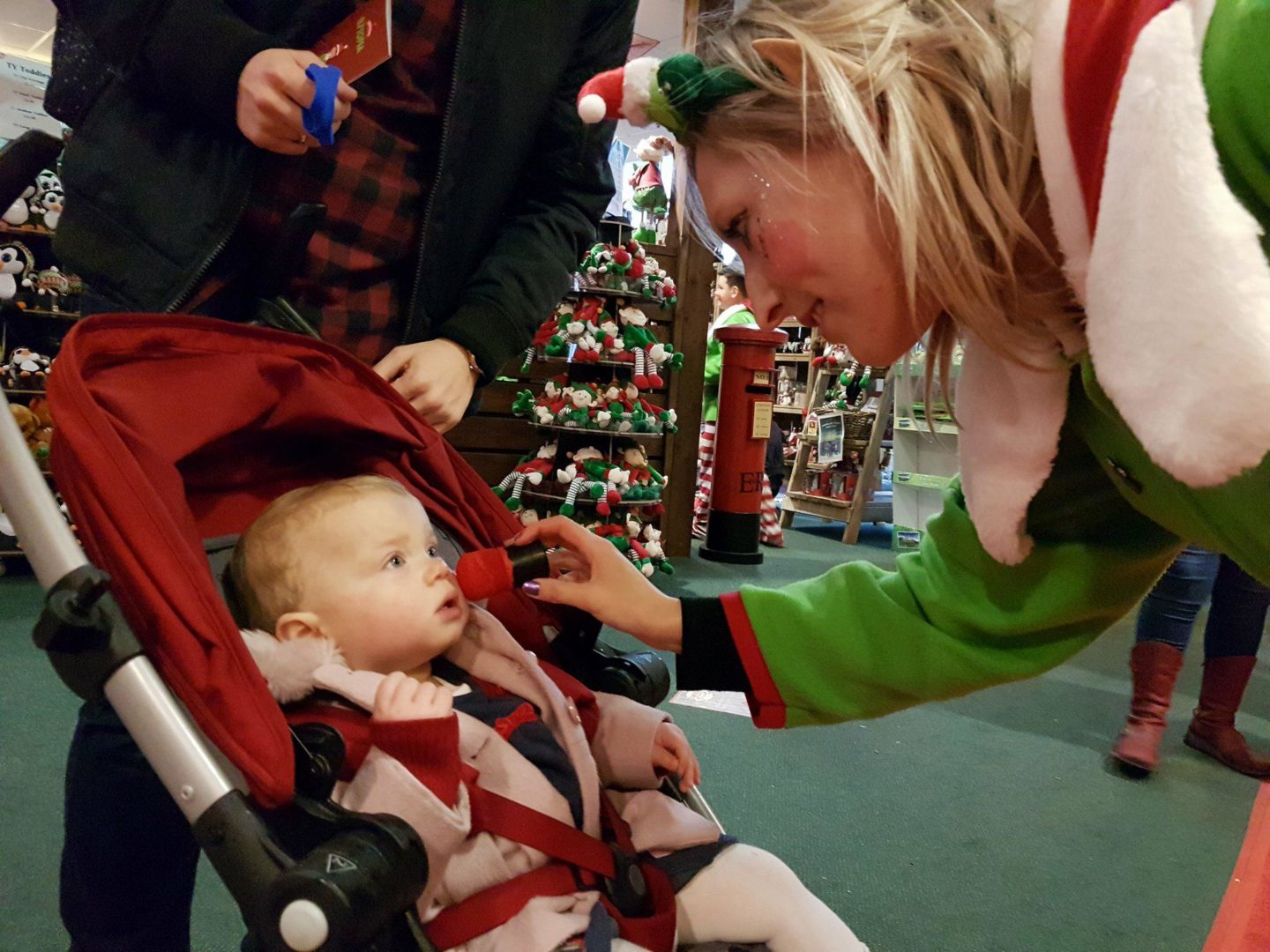 Next, we went to get Autumn’s flight suit. Only, there were none small enough! Instead, she got a cuddly elf toy. Our photo was then taken before we went through elf control. Children got to go through first and I accompanied Autumn. As each of the adults through, they had to perform various tasks such as their best dance or joke to prove their Christmas spirit.

We boarded the sleigh and went on a journey through space and snow, until we arrived at Elftopia. Our captain was great, although we did all get covered in snow at one point! 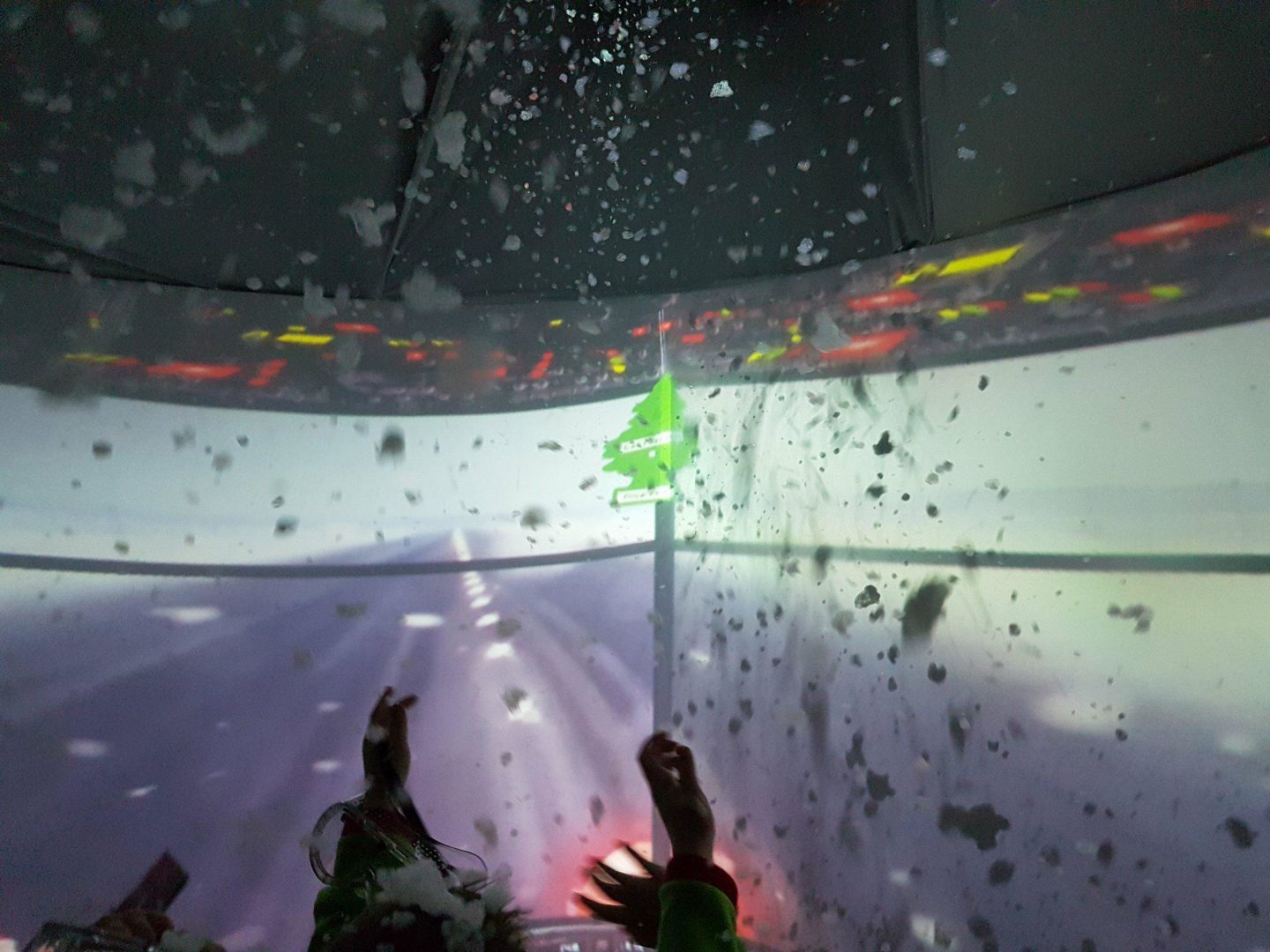 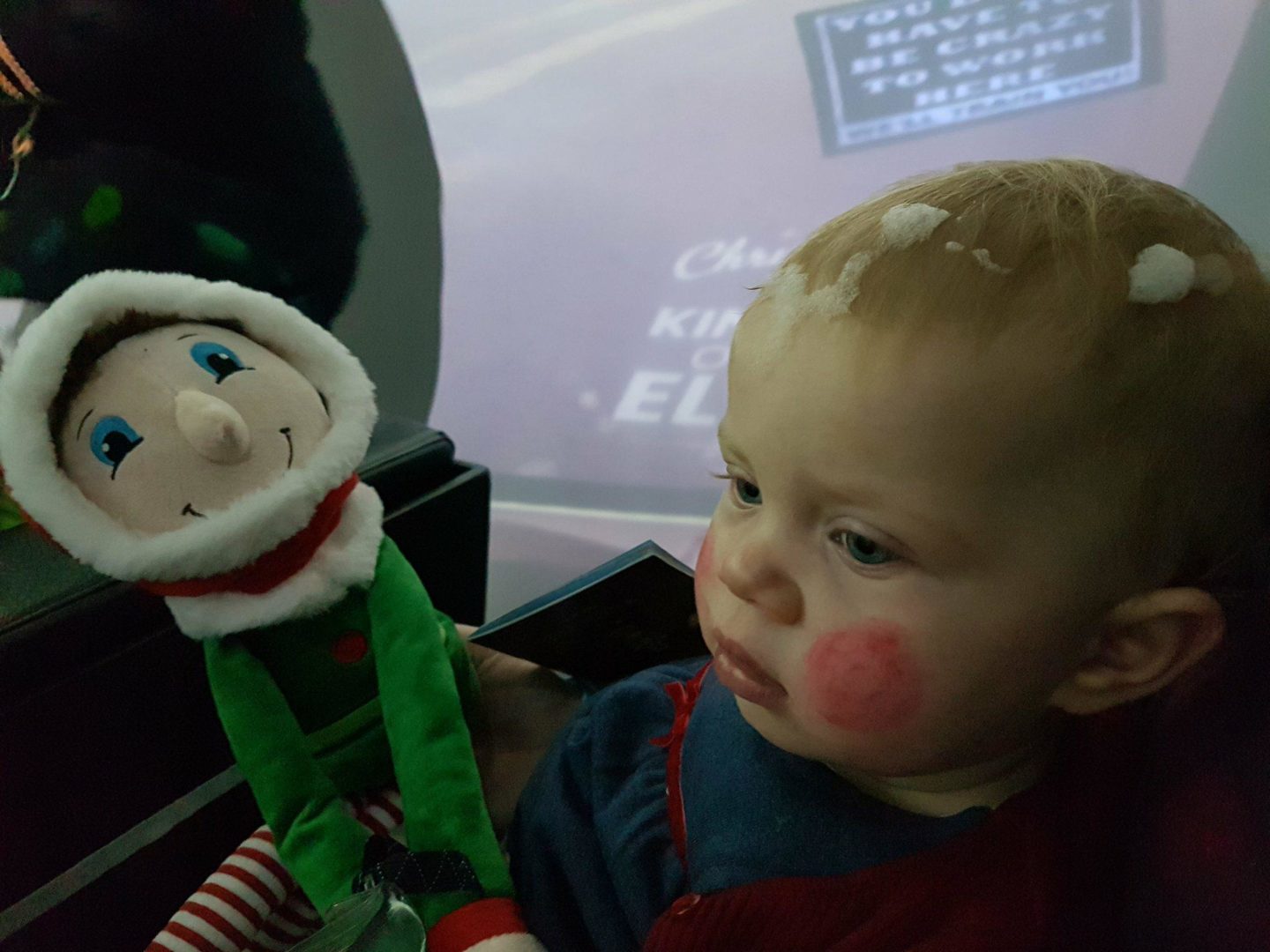 I was worried that at 14 months old, Autumn wasn’t going to like sitting still. However, she was happily entertained by it all – especially the captain!

Our first stop was in a magical room, full of glittery volcanoes and a huge glittery rainbow. The elf in training there was called Seren, which means star in Welsh. She asked the children to help her find the stars around the room to put in her volcano. Then, we assembled around tables to make magical reindeer food. Autumn loved the pom poms and metallic sandwich ties, although most of it was lost on her. You could really tell how much all the older children loved it though! 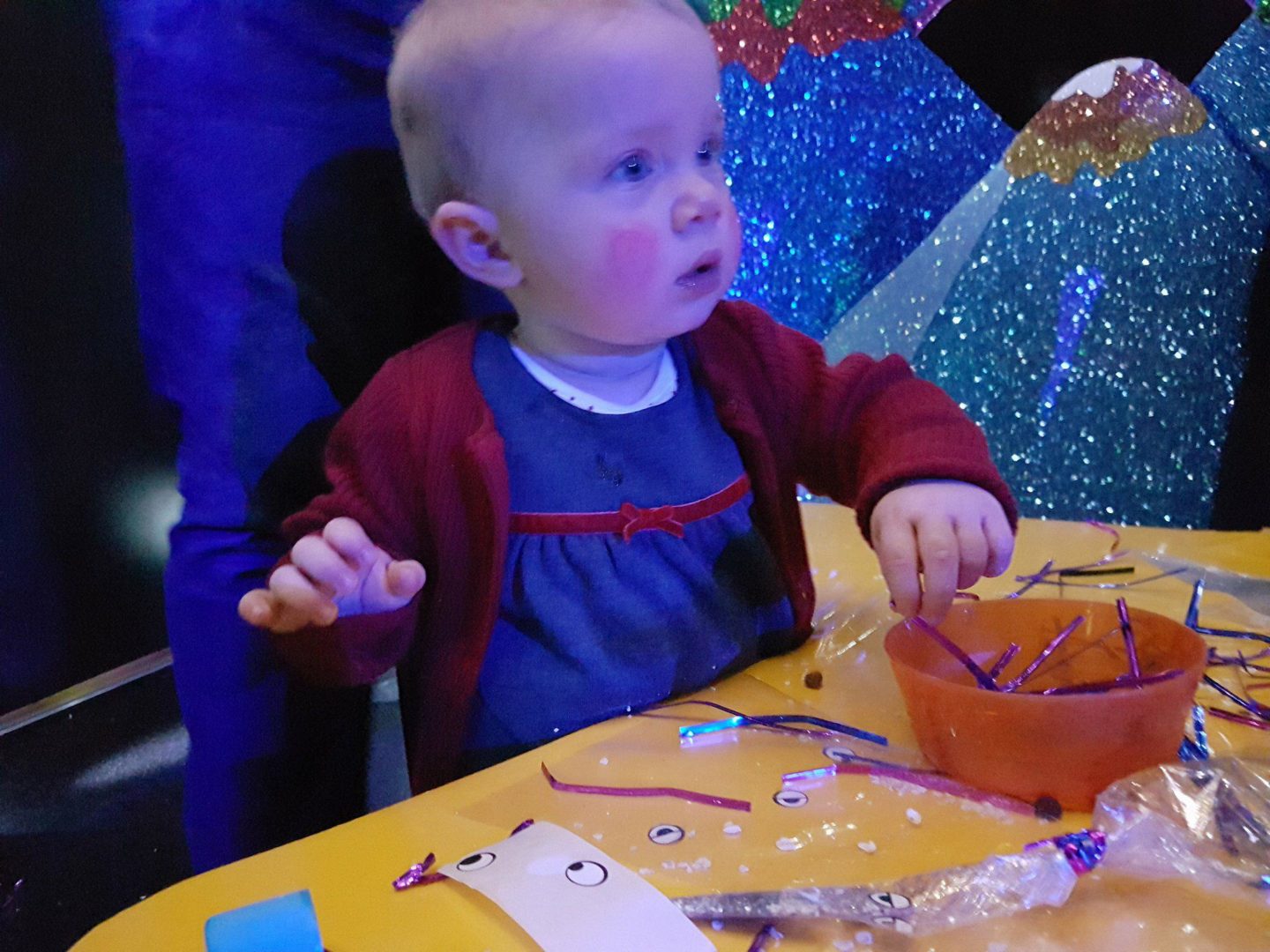 There was a light tube that Autumn was mesmerised by, just like when we did sensory play when she was younger. 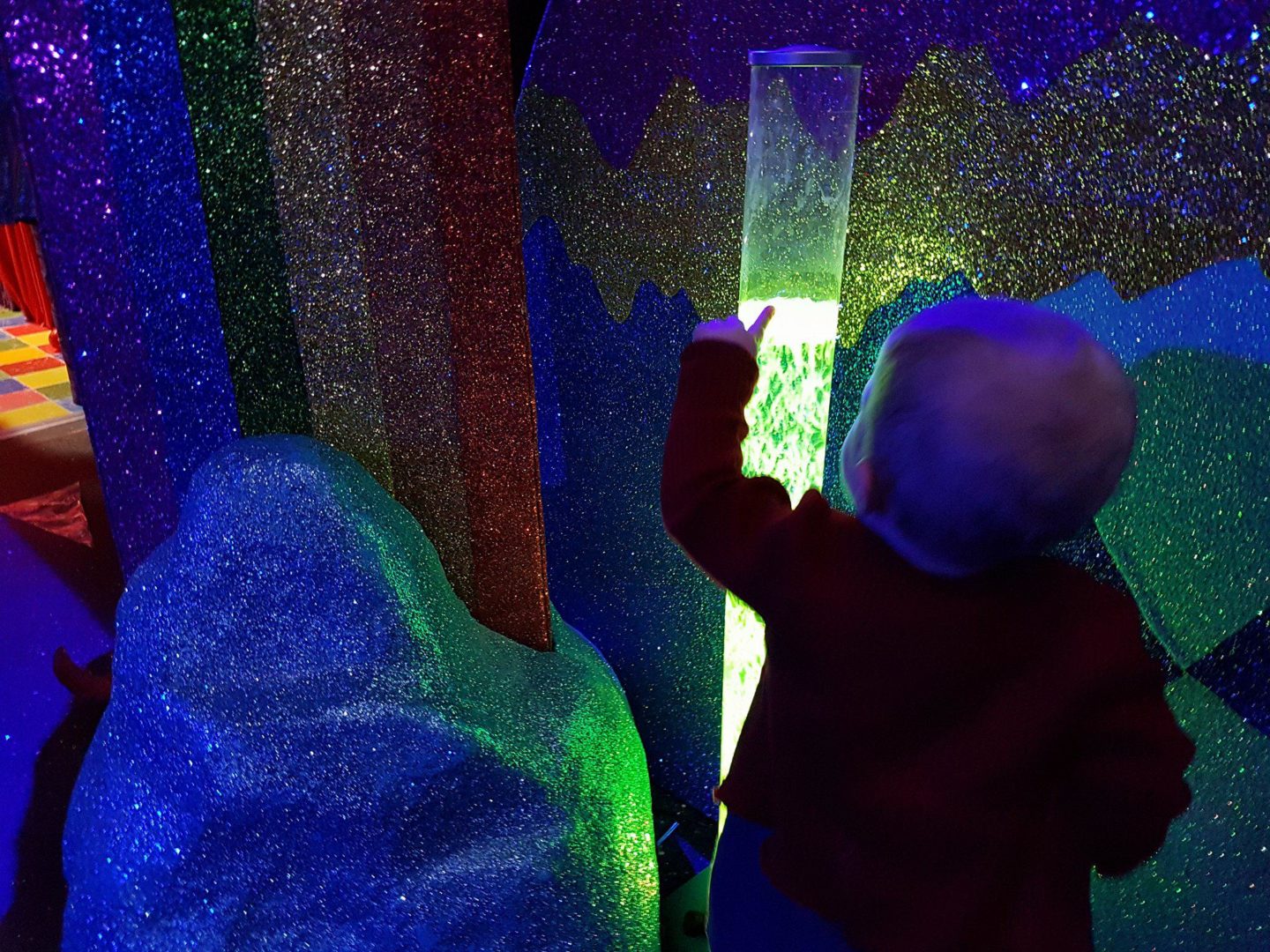 Our second stop was in a Fun House themed room. I adored Fun House as a child and always wanted to go on there, but it ended before I was old enough! The elf in this room even had the Pat Sharp mullet! 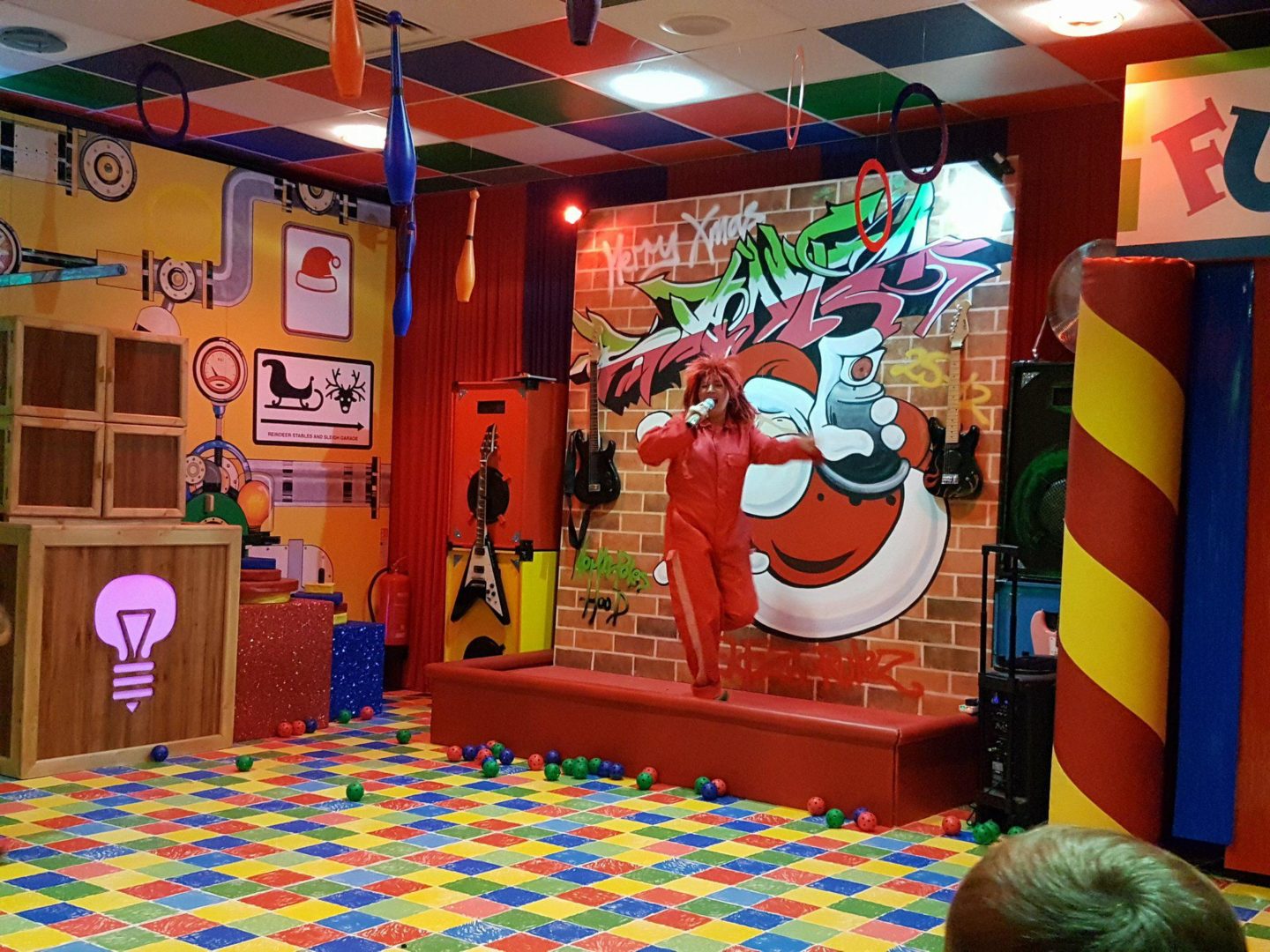 As well as music and dancing, the children had to beat the adults by getting the most balls from around the room into a basket. Of course, the children won! 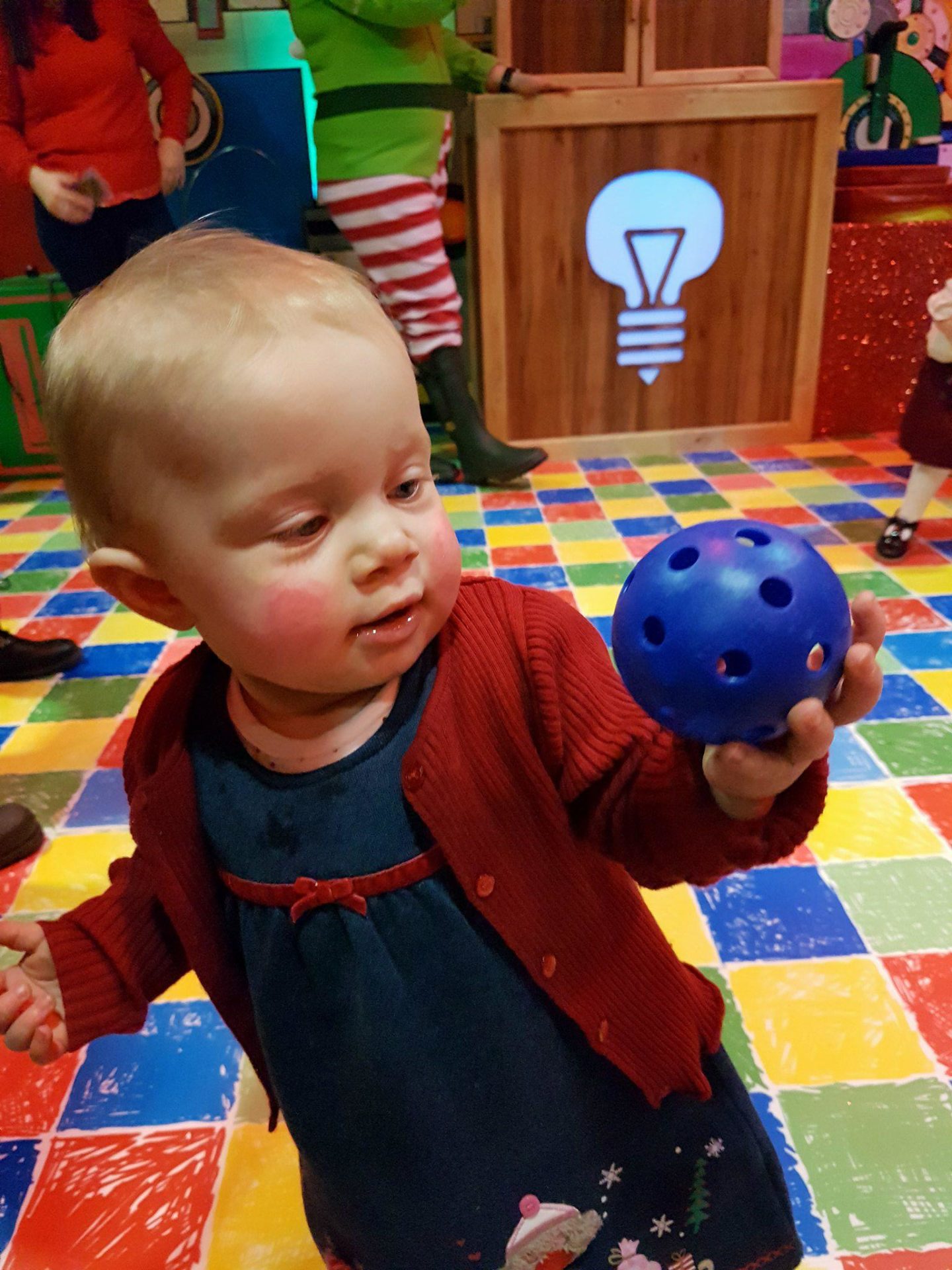 Last but not least, we met the Snow Queen in her magical ice cave. 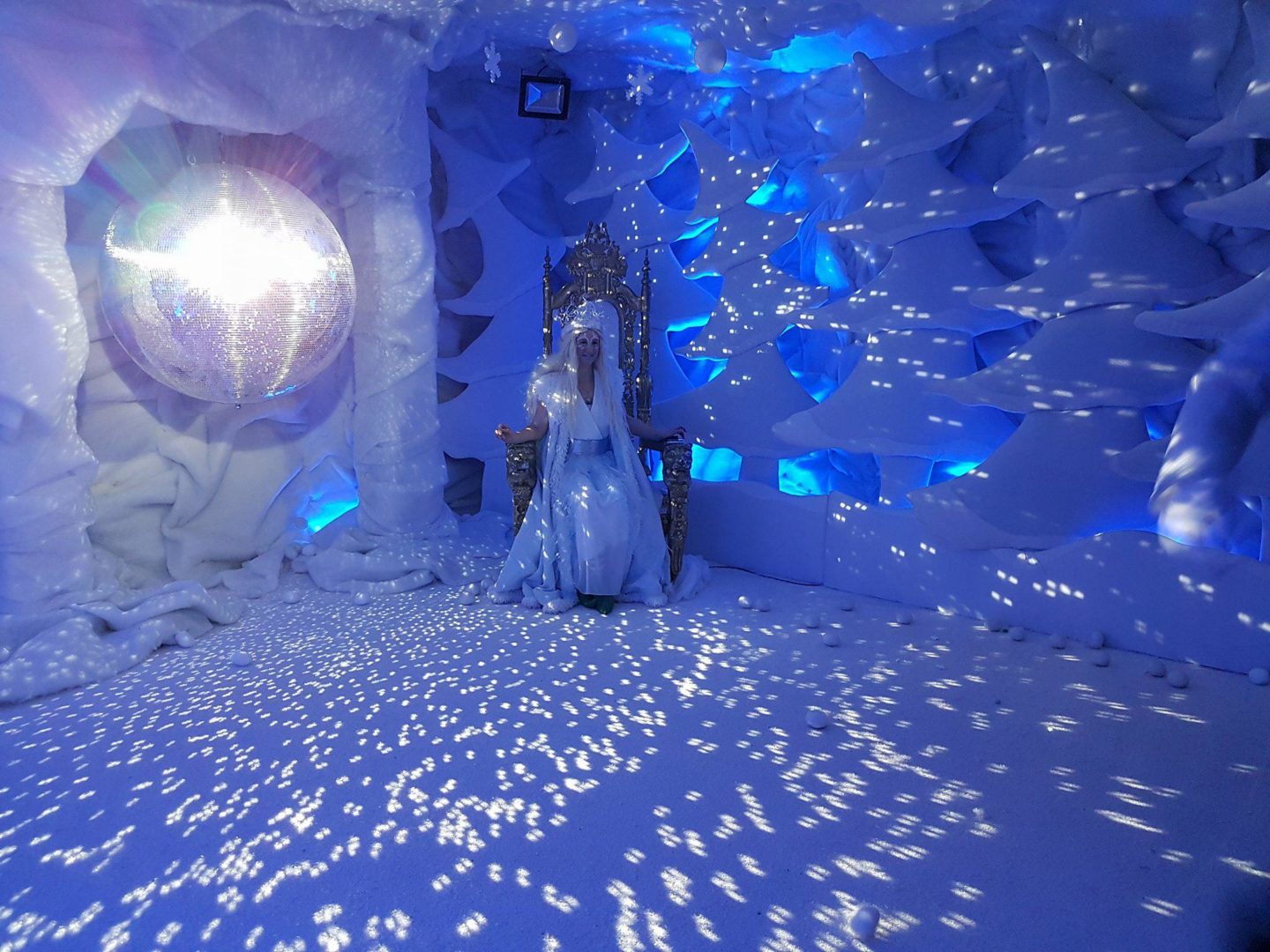 We had a magical sing-a-long and even had a little snow ball fight! I think Autumn really enjoyed it. 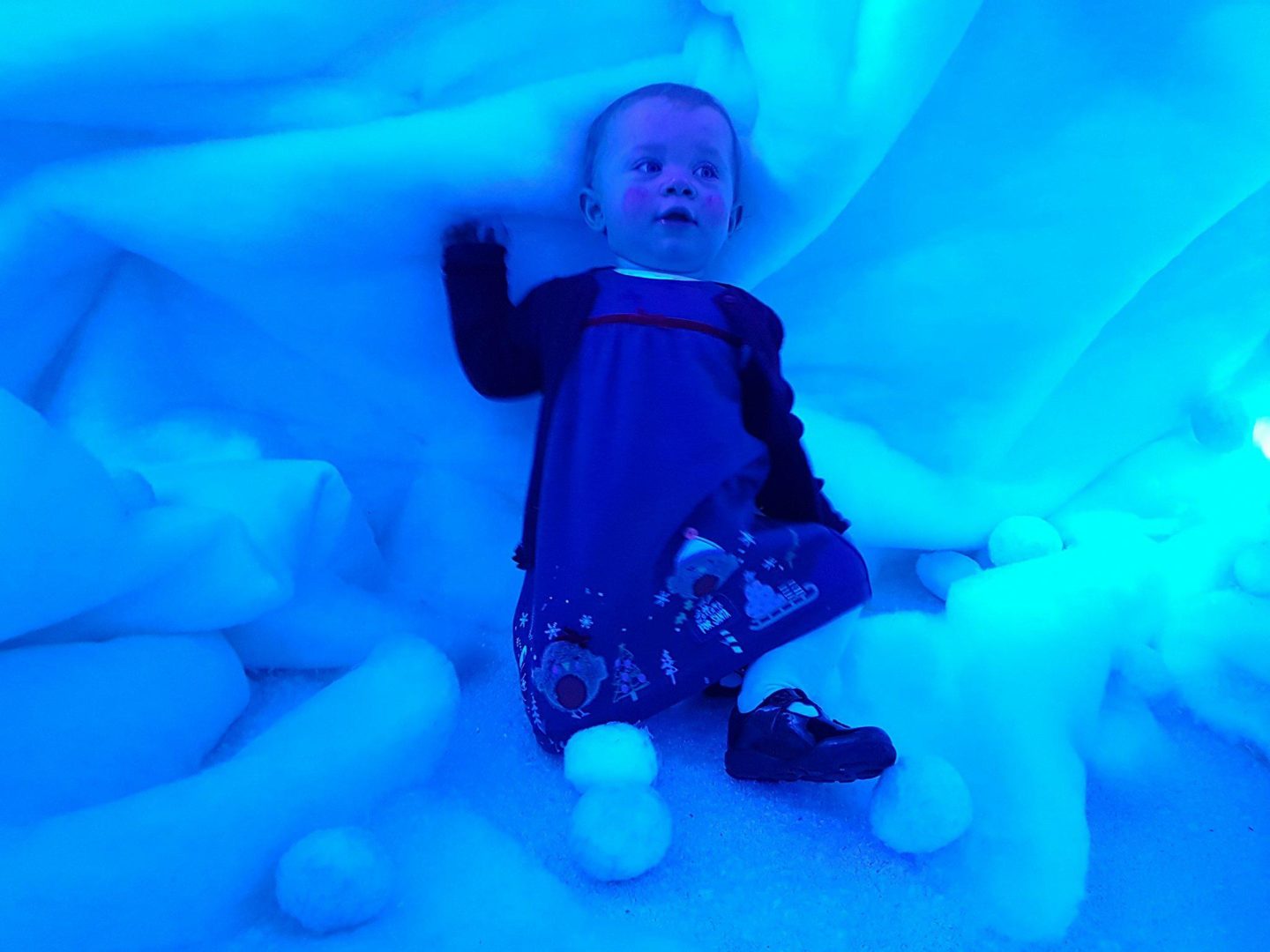 She loved the snow at the end, too! All-in-all, it was a truly magical experience. I kind of wished I could have become small again and enjoyed it as a child! 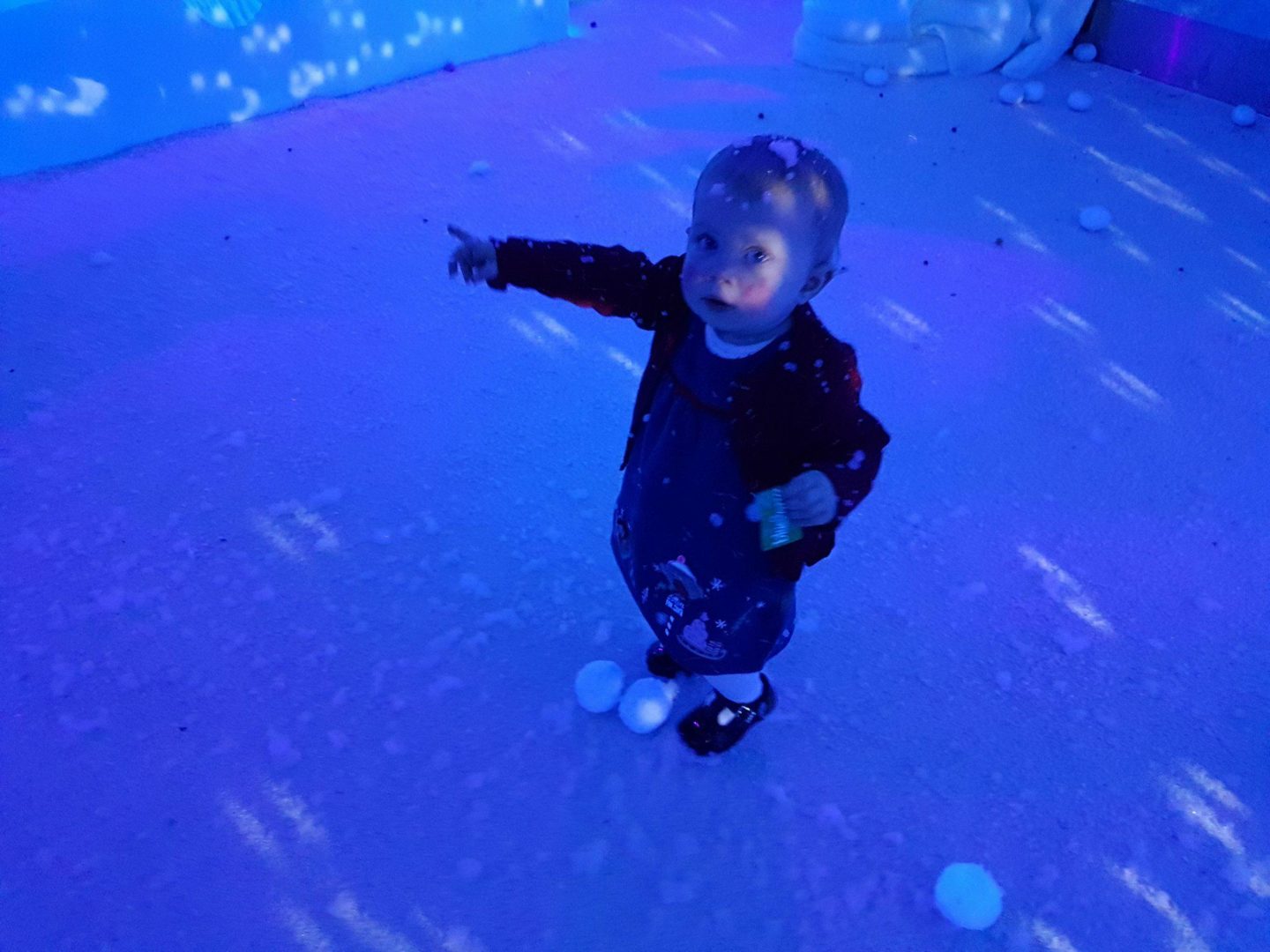 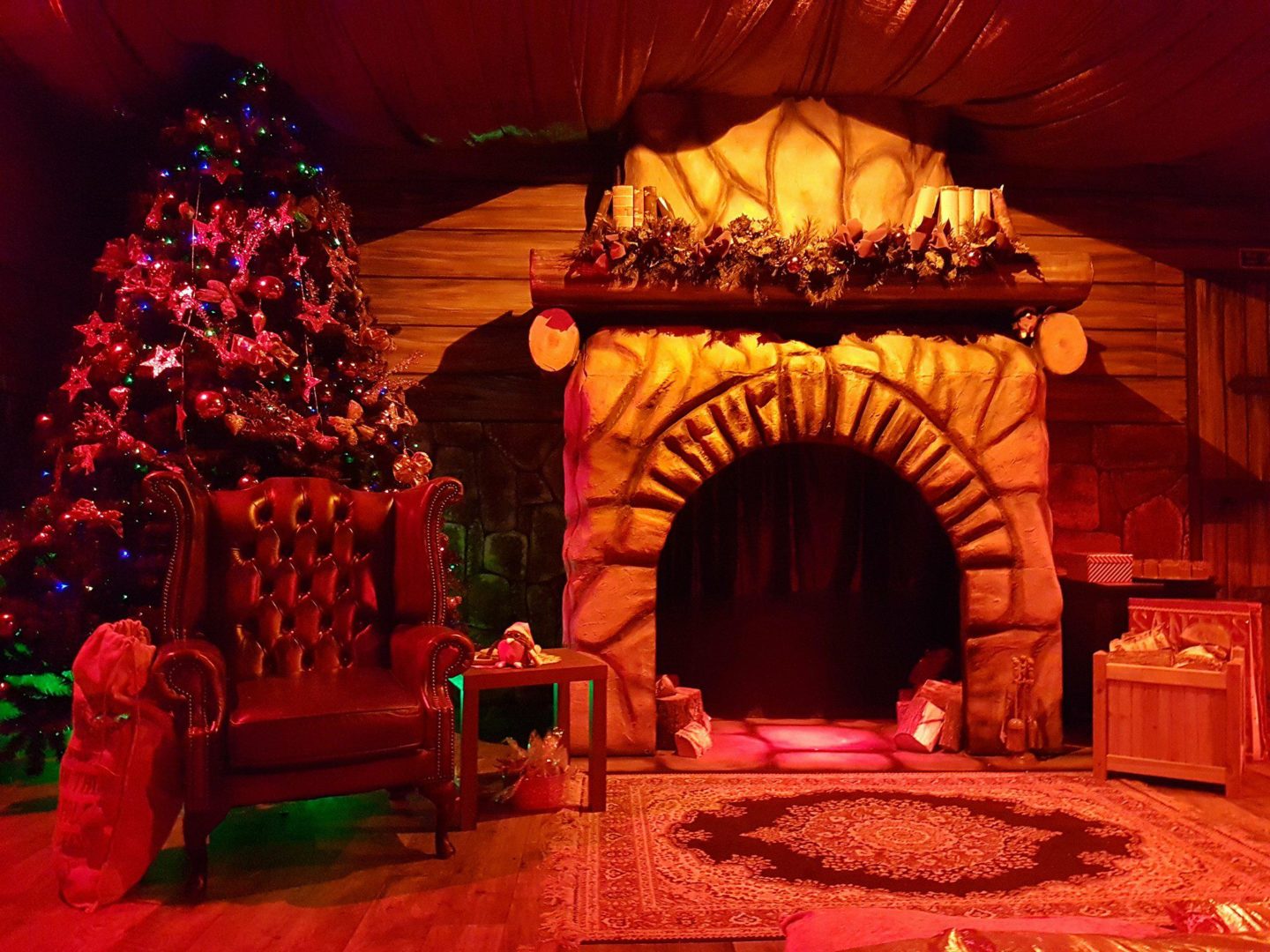 There, children were invited to gather round and sit on plush cushions around the fireplace. After a few minutes of speculation, Santa came down the chimney!

Father Christmas sat in his cosy chair in front of the tree and read us a story about a Christmas robin. I won’t spoil it for you in case you’re going, but it really is such a beautiful story. Autumn decided to roll around on the cushions a little while it was being told and rolled into Jingles the elf! They smiled at each other and he gave her a little tickle – it was so cute. 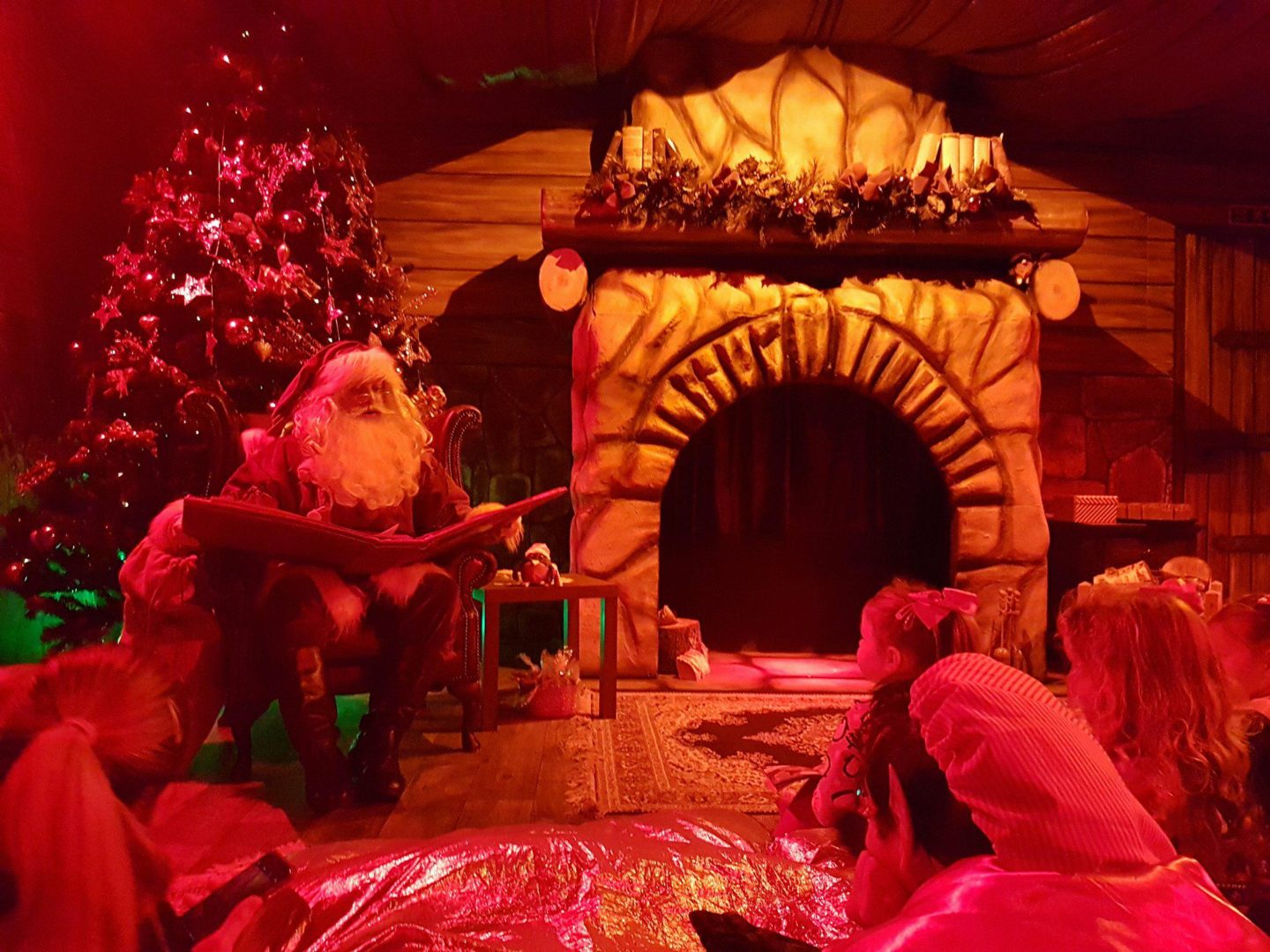 Once the story had been read, we went to the craft benches at the back of the room. There we made bird feeders with clay for our Christmas robins. We were later also given some bird food to put in it. During the craft, each child was invited to the front to meet Santa and have a photo taken. Santa told Autumn that he doesn’t start judging children on whether they’re bad or good until 18 months, so she had nothing to worry about this year! 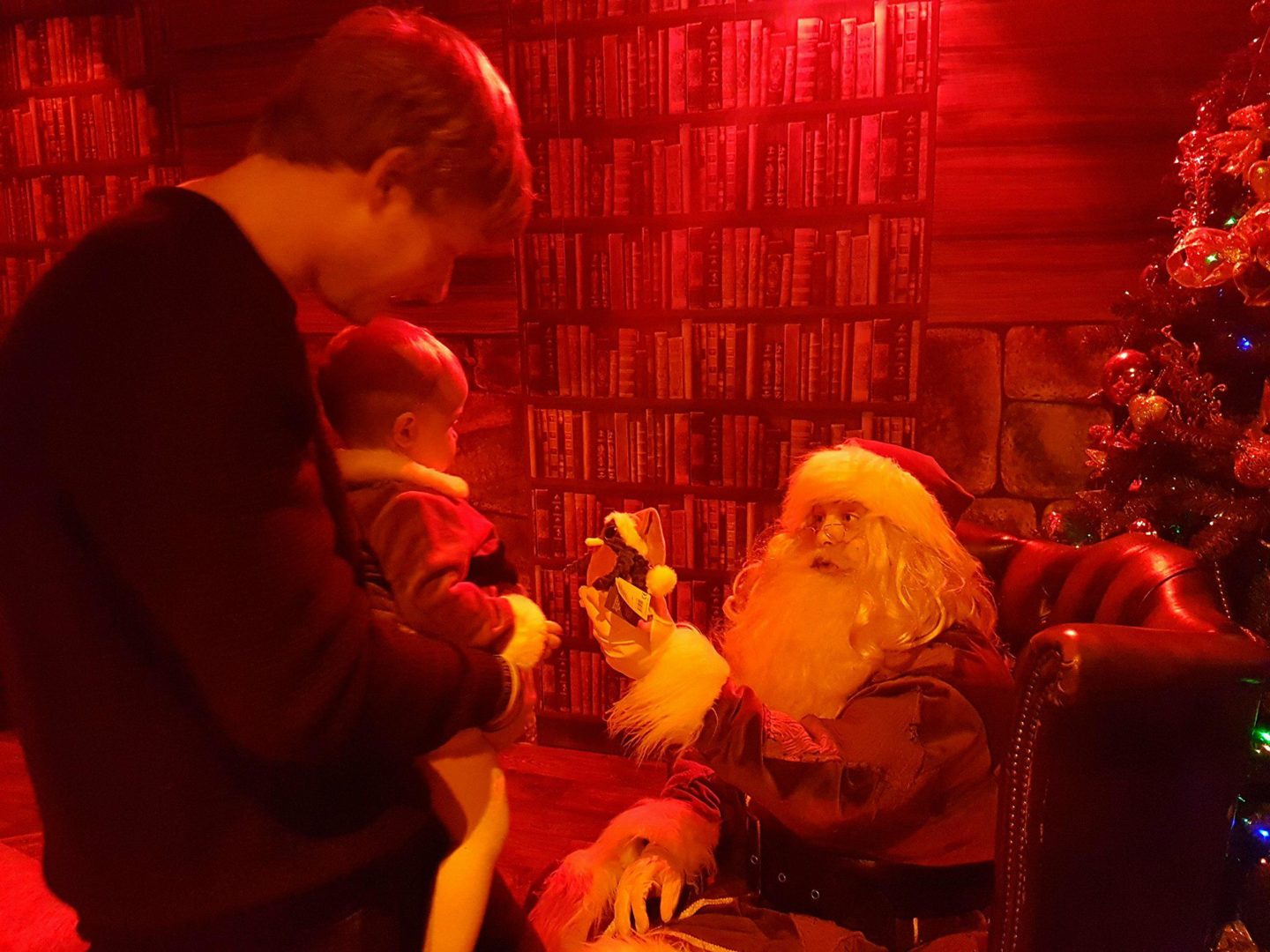 It was such a magical experience and I felt so festive and happy afterwards, as we walked through the beautiful lights in the village back to our lodge. Autumn was given a Christmas robin cuddly toy from Santa. Cuddly toys come and go, but I have a feeling this will be one we’ll treasure forever.

Dave and I finished off the evening with some tasty Welsh bread, cheese and wine. Perfect! 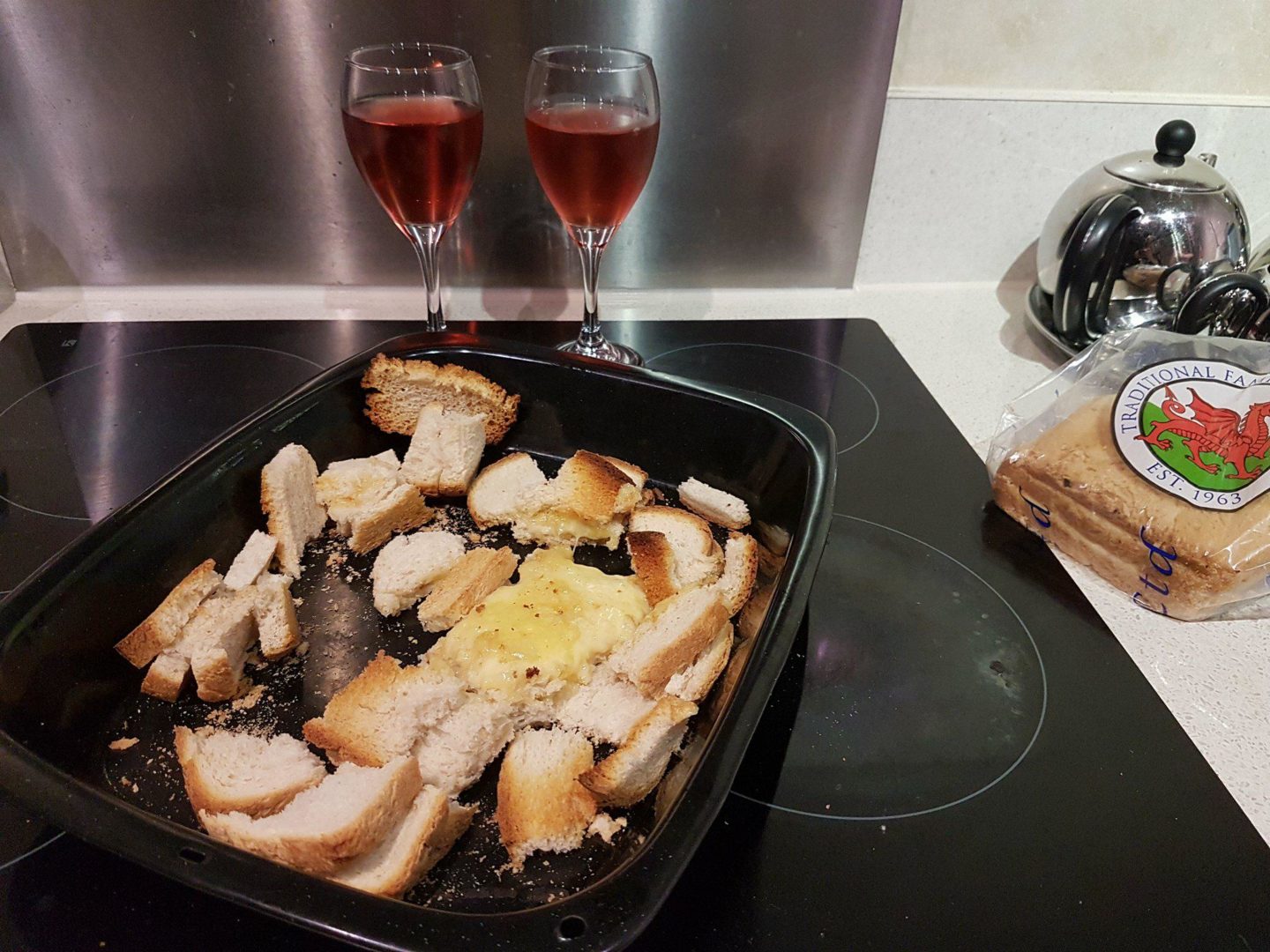 How Your Family Can Save Money in the Home

5 responses to “Christmas at Bluestone: Day 3”