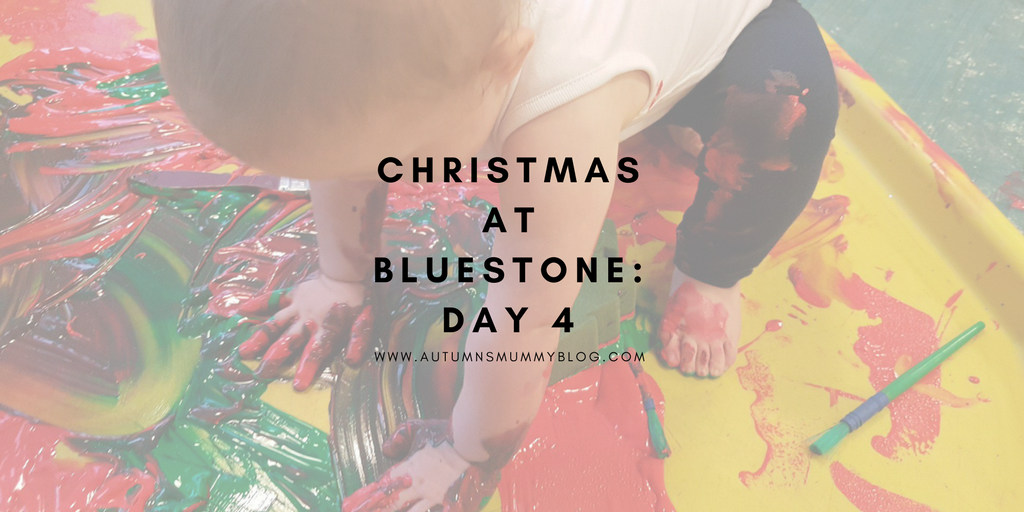 Woohoo, this is my 200th blog post! I couldn’t let this slip by without a casual mention. I love that it’s happened to fall on this blog post. Our Christmas midweek break at Bluestone was so wonderful. I’ve really been enjoying reliving it on the blog this week!

By our fourth day at Bluestone, I was beginning to feel quite sad. The week had gone so fast! I wanted to visit Santa’s Workshop and Elftopia and do all the Christmassy things again!

On Monday and Tuesday we’d got drenched. On Wednesday, we only avoided it by doing indoor activities all day! Ridiculously, not getting soaked through and cold felt something of a luxury.

To wake up on Thursday morning, open the curtains and see sunshine was just wonderful! 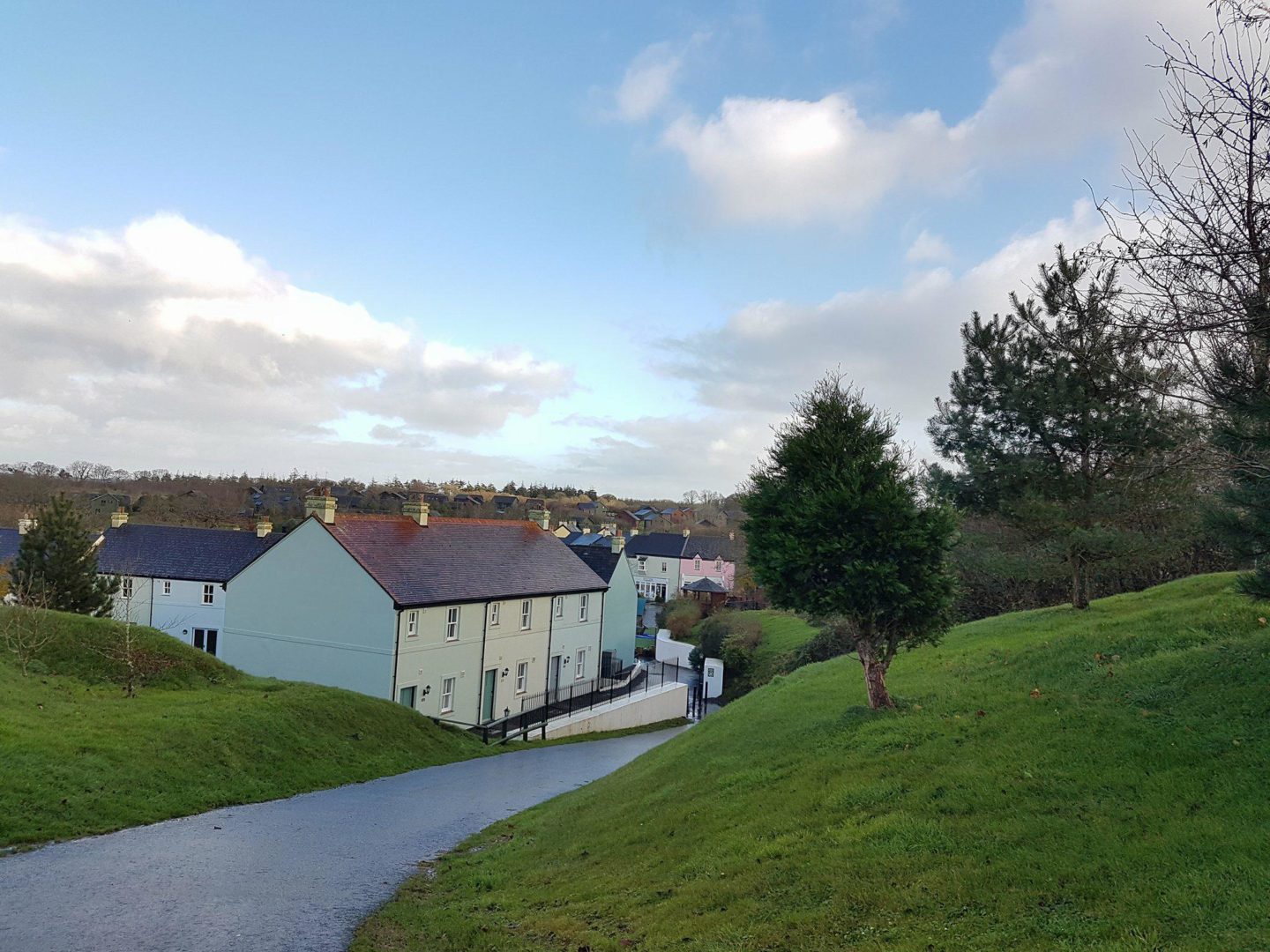 “Typical” we thought, knowing that we had to leave the next morning. Still, we planned the day ahead and decided to make the most of the sunshine.

We missed the first Land train we wanted to catch. While we were waiting for the next, we decided to have a walk around the beautiful lake. 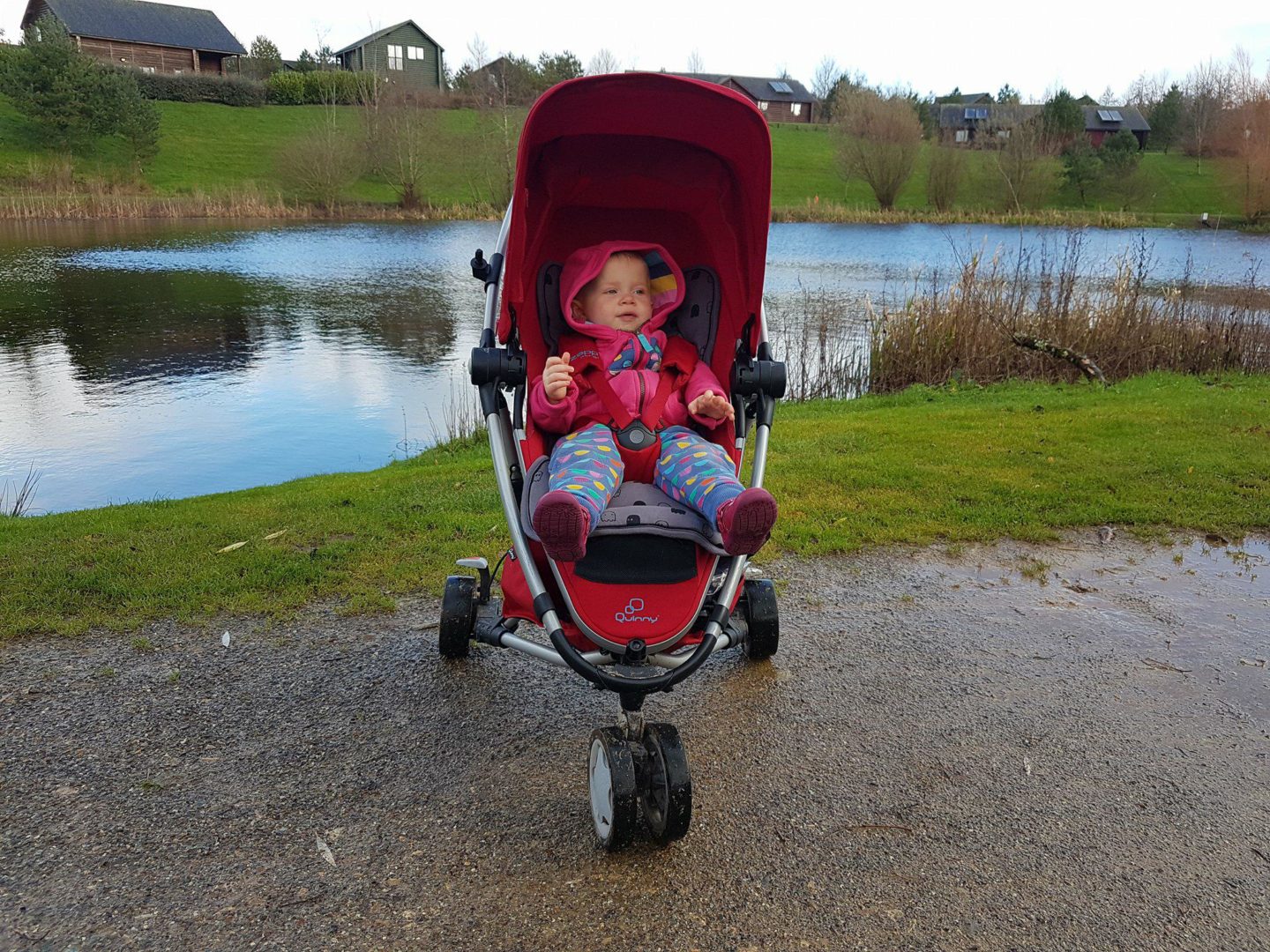 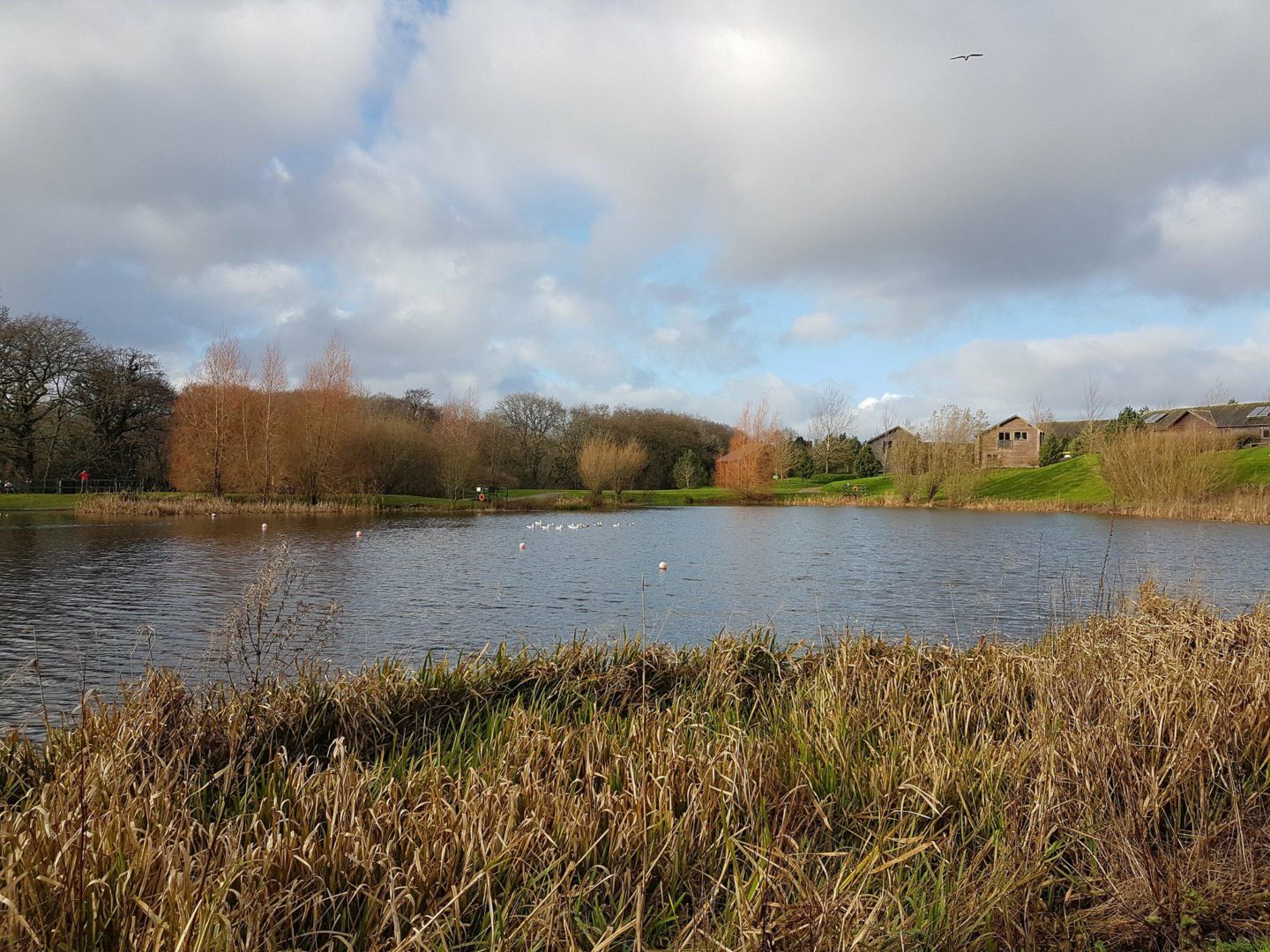 It was only a short walk, but Autumn and I really enjoyed it. We also had a look at the nearby bug house, which was pretty cool! 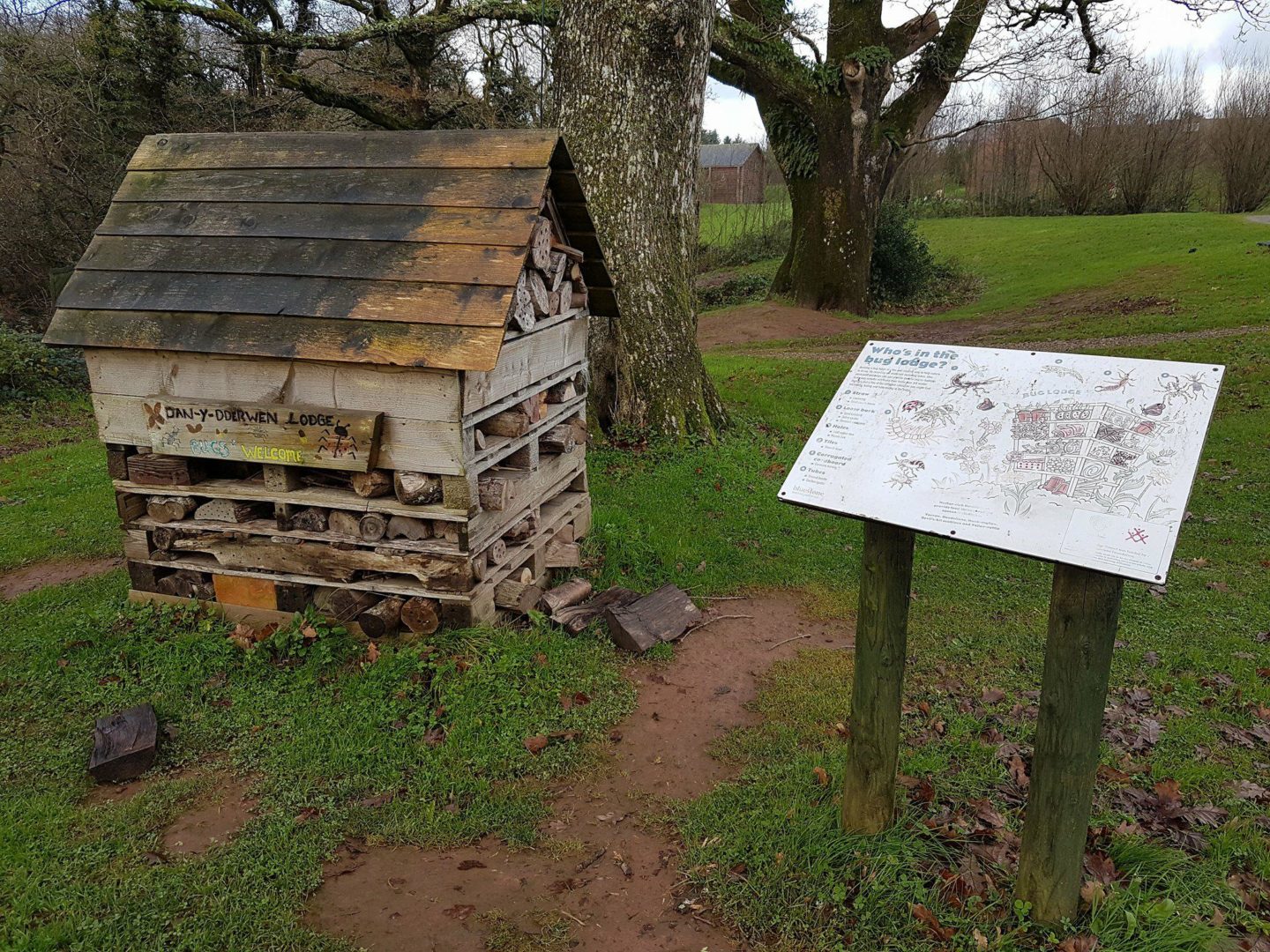 Before long, the Land train was back in the village. 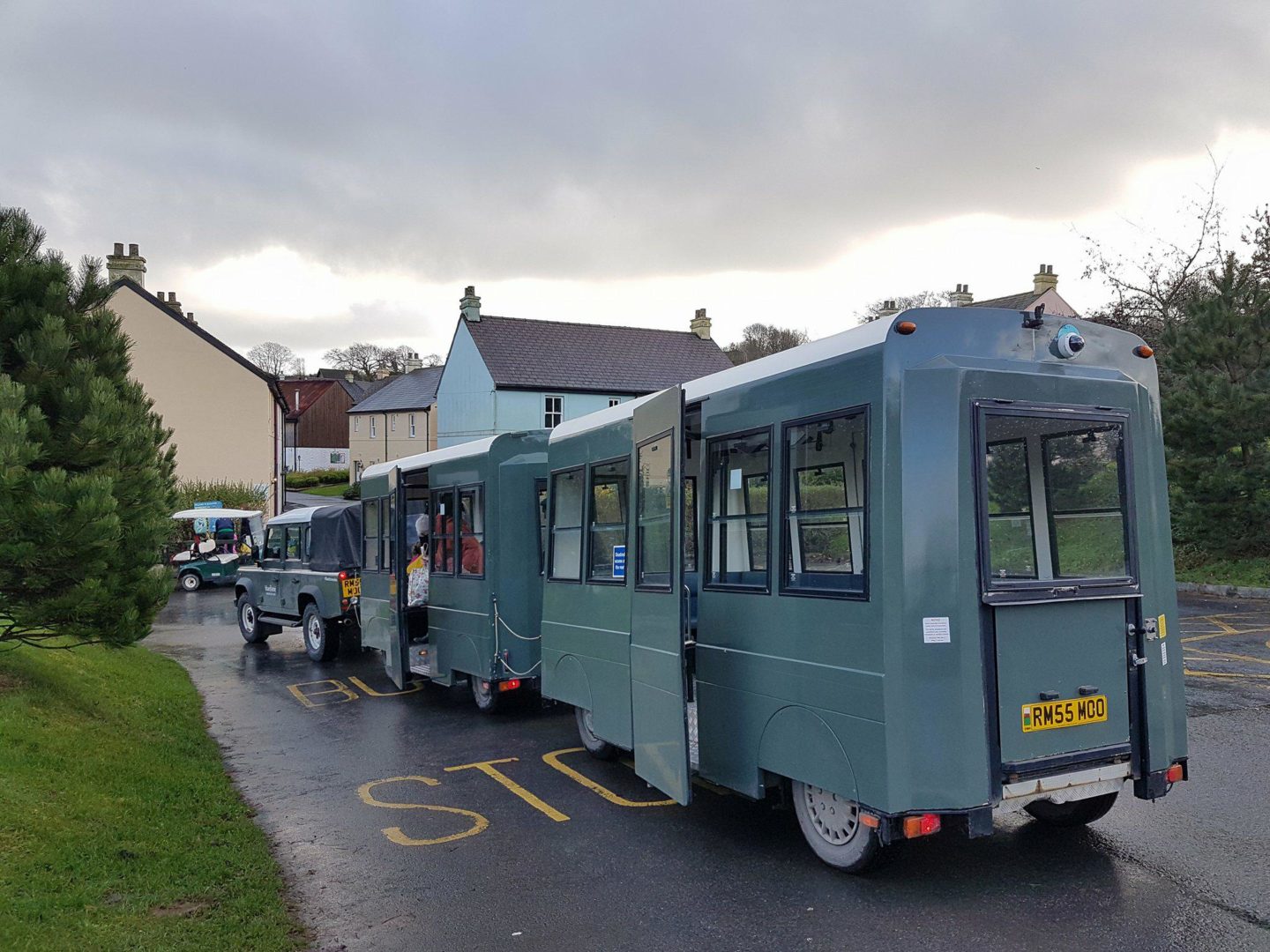 We boarded, heading to the car park. Autumn looked tired already, bless her! 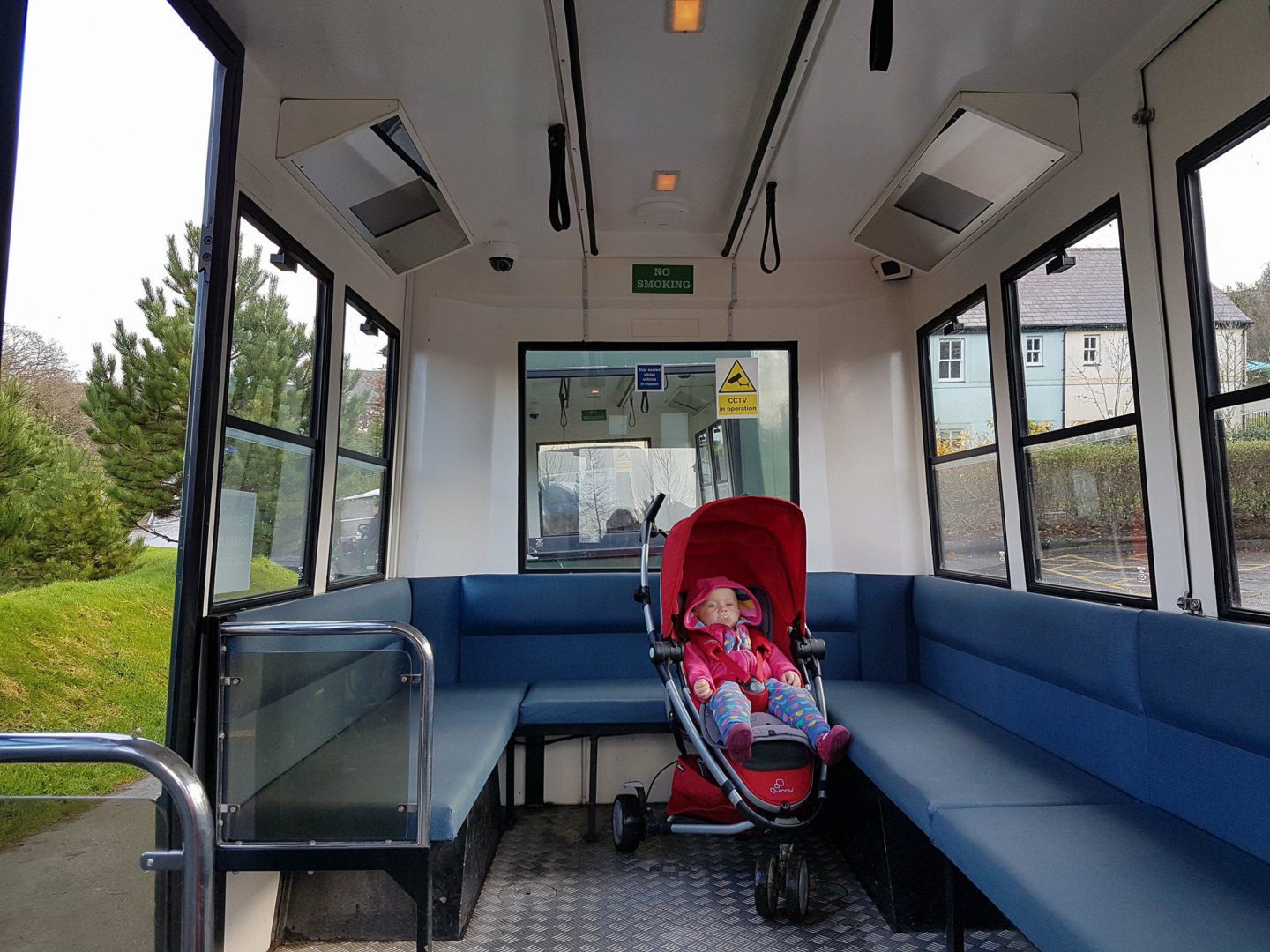 Once we were all in the car, we made the short journey to Kilgetty. When we went on our babymoon to Pembrokeshire last year, we discovered The Lovespoon Workshop. We bought one with a stork carrying a baby on it and had our initials and the year carved on it. At the time, the man there said we could send it back once the baby was born to have his/her initial carved on it.

We never got round to it, so we thought we’d take our lovespoon with us. It was great visiting again, this time with our baby there too see it all too! It’s a brilliant place to visit, the Thomas family are so friendly and have so much talent. Apparently when Bluestone first opened they had a surplus of wood. As such, some was offered to The Lovespoon Workshop for them to make their spoons with!

While we waited, Autumn had fun playing with the little boy there’s combine harvester toy. He kindly agreed when his dad asked him to share. Prior to that, Autumn had been getting too close to knocking mugs and gifts off of the shelves for my liking. She seemed delighted when we showed her her initial carved on the spoon. So much so, she tried to snatch it right off of us! 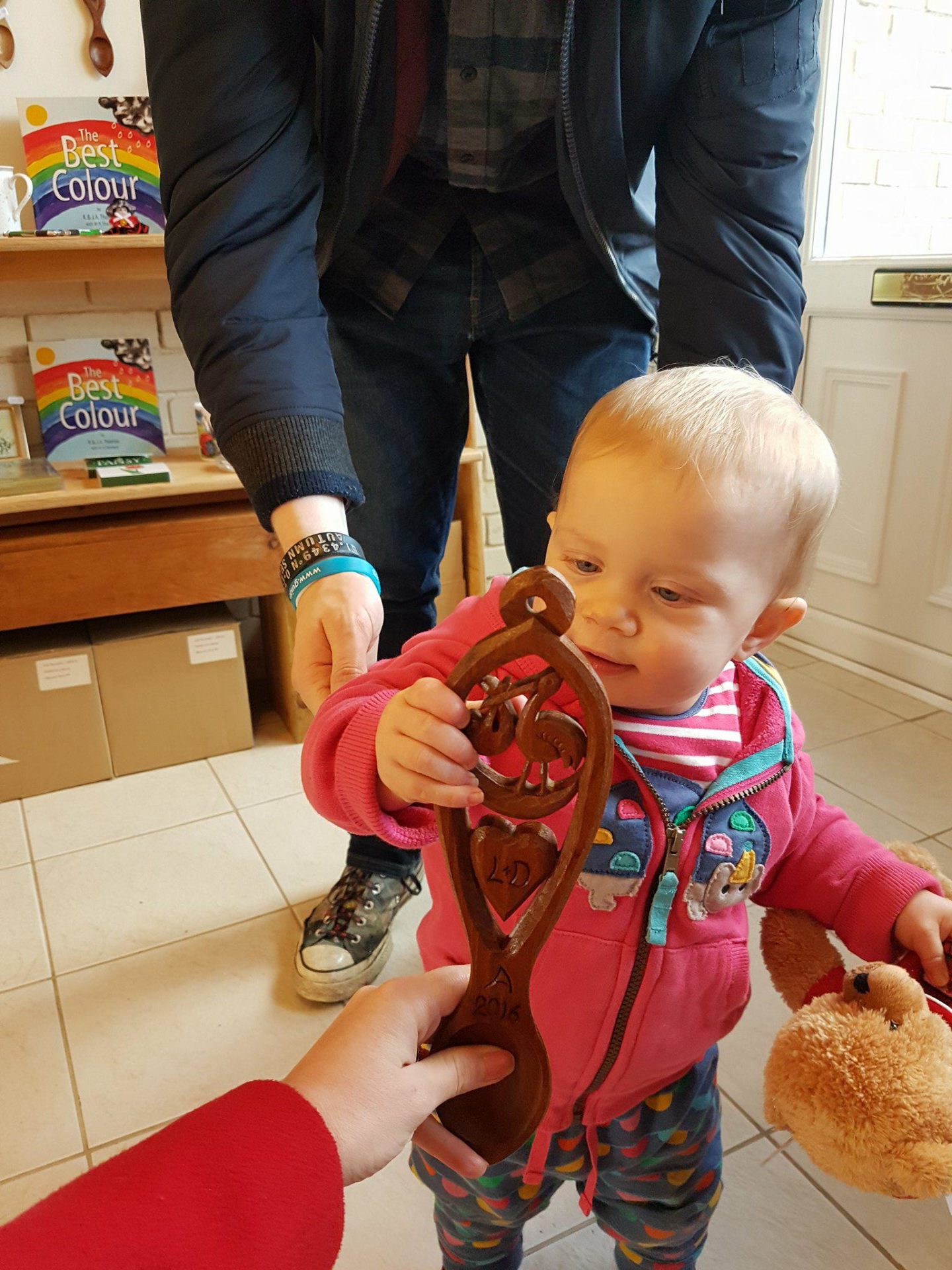 She also picked up a teddy bear wearing a Wales jumper. We named him Bryn!

We briefly visited Saundersfoot in the hope of getting some cupcakes from the amazing Sue’s Pantry afterwards. However, they were closed for DIY and not reopening until Saturday. We were very disappointed, but visited one of the gift shops and looked over the beautiful beach. It was Autumn’s nap time and she fell asleep as I was trying to take her picture with Bryn! 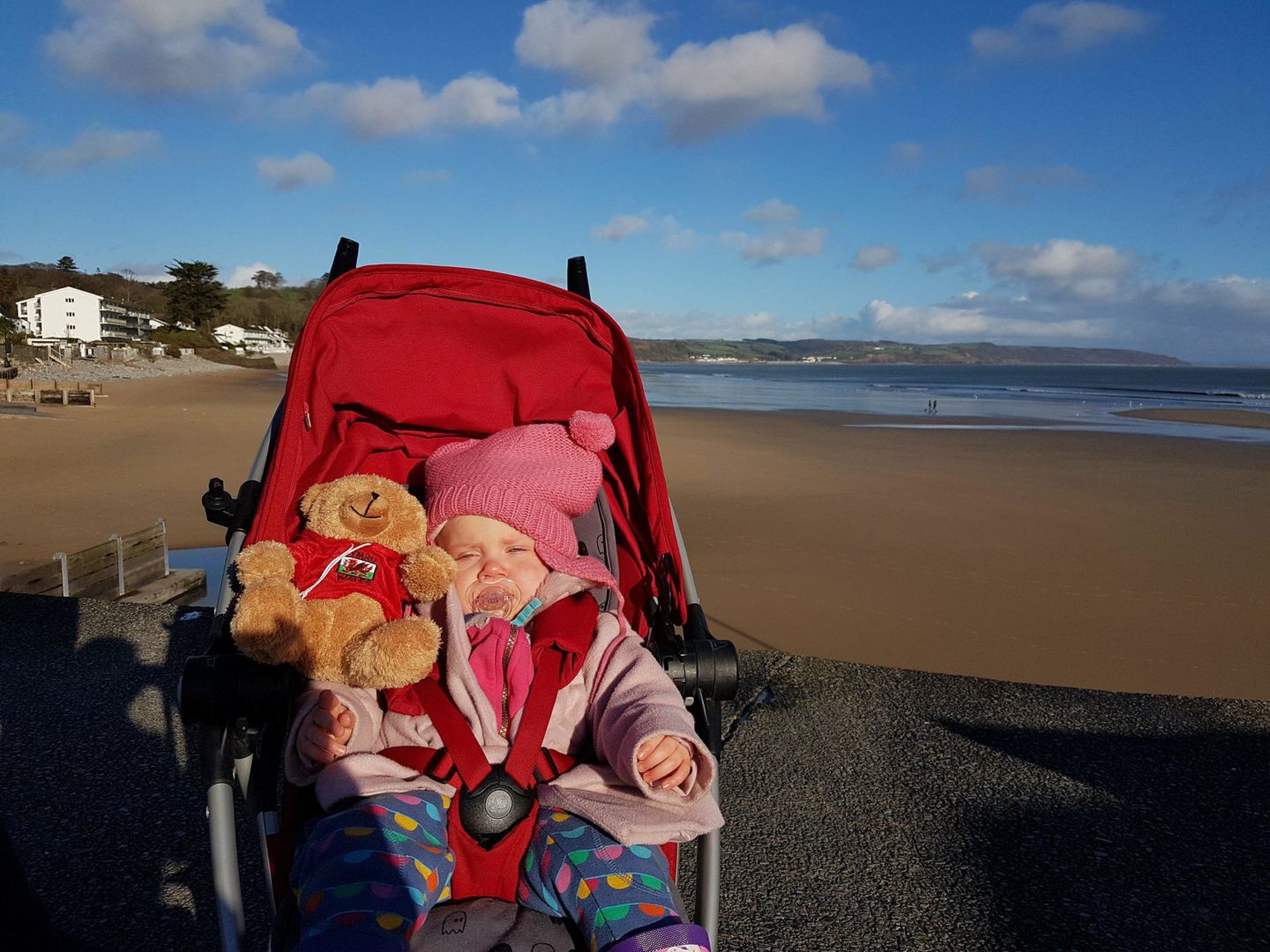 When we got back to Bluestone, it was 2pm and definitely time for some lunch! We were due for Shelby Snail’s messy play in the adventure centre at 4pm. As such, we decided not to venture into the village. Instead we went to the Wildwood Cafe which is upstairs in the adventure centre. It’s an enchanted world that becomes even more magical at Christmas time! 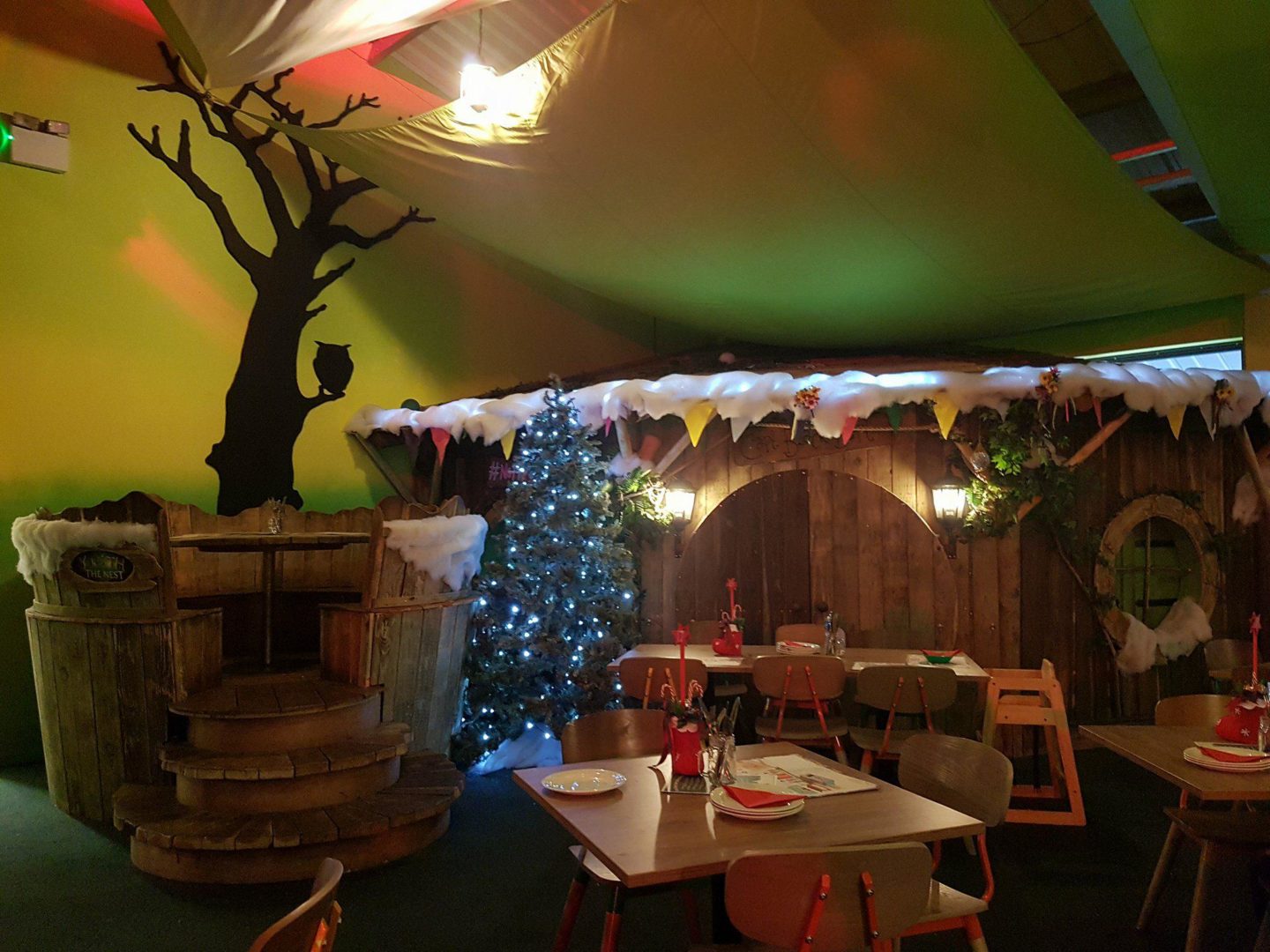 The menu is quite reasonably priced and very child-friendly. Autumn enjoyed a lunch of pizza, chips and beans! I’m quite a fussy eater, so the menu was good for me too. I chose a jacket potato with cheese and beans. 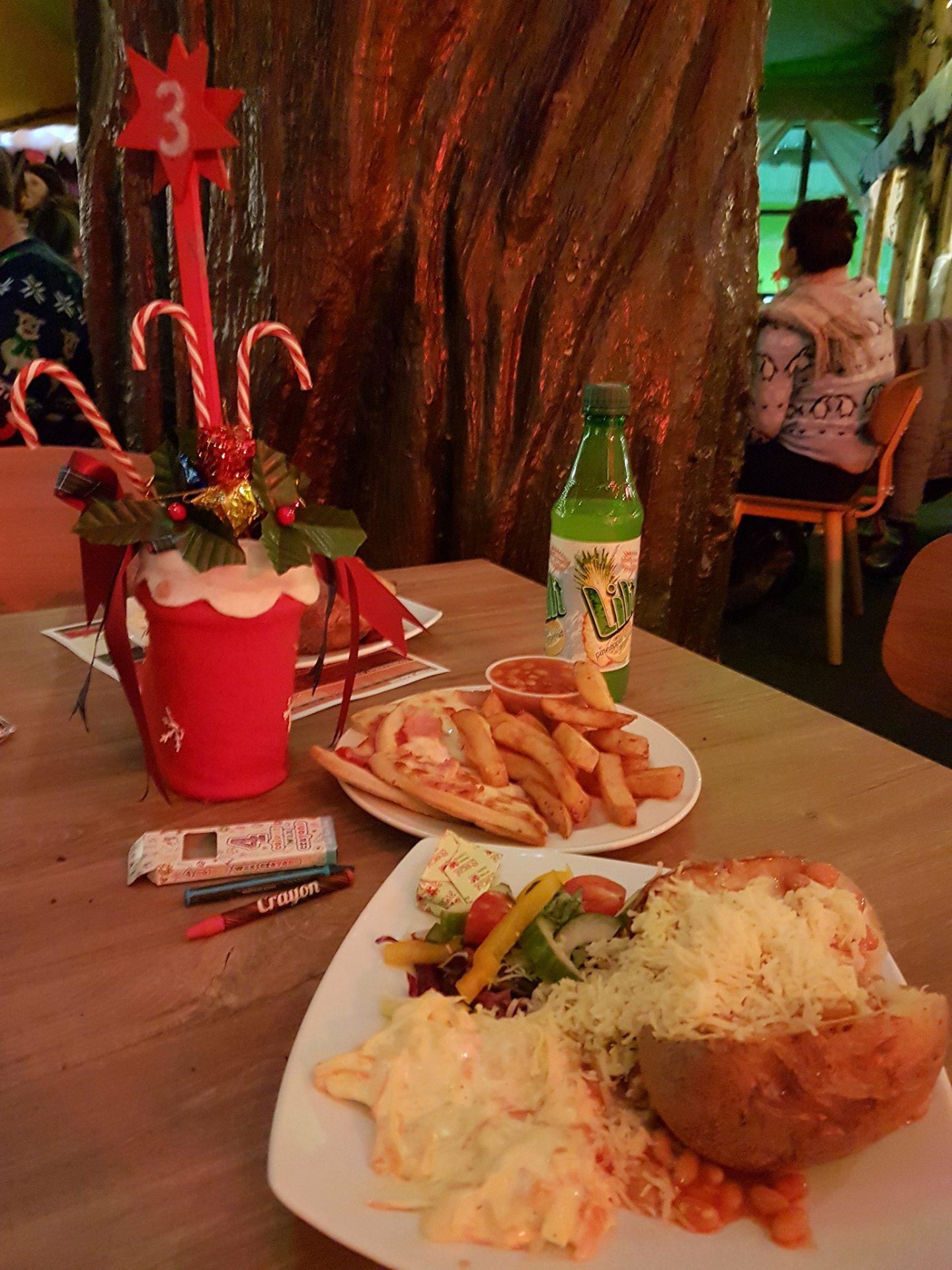 While we were in the cafe, Autumn got to meet Rudolph. 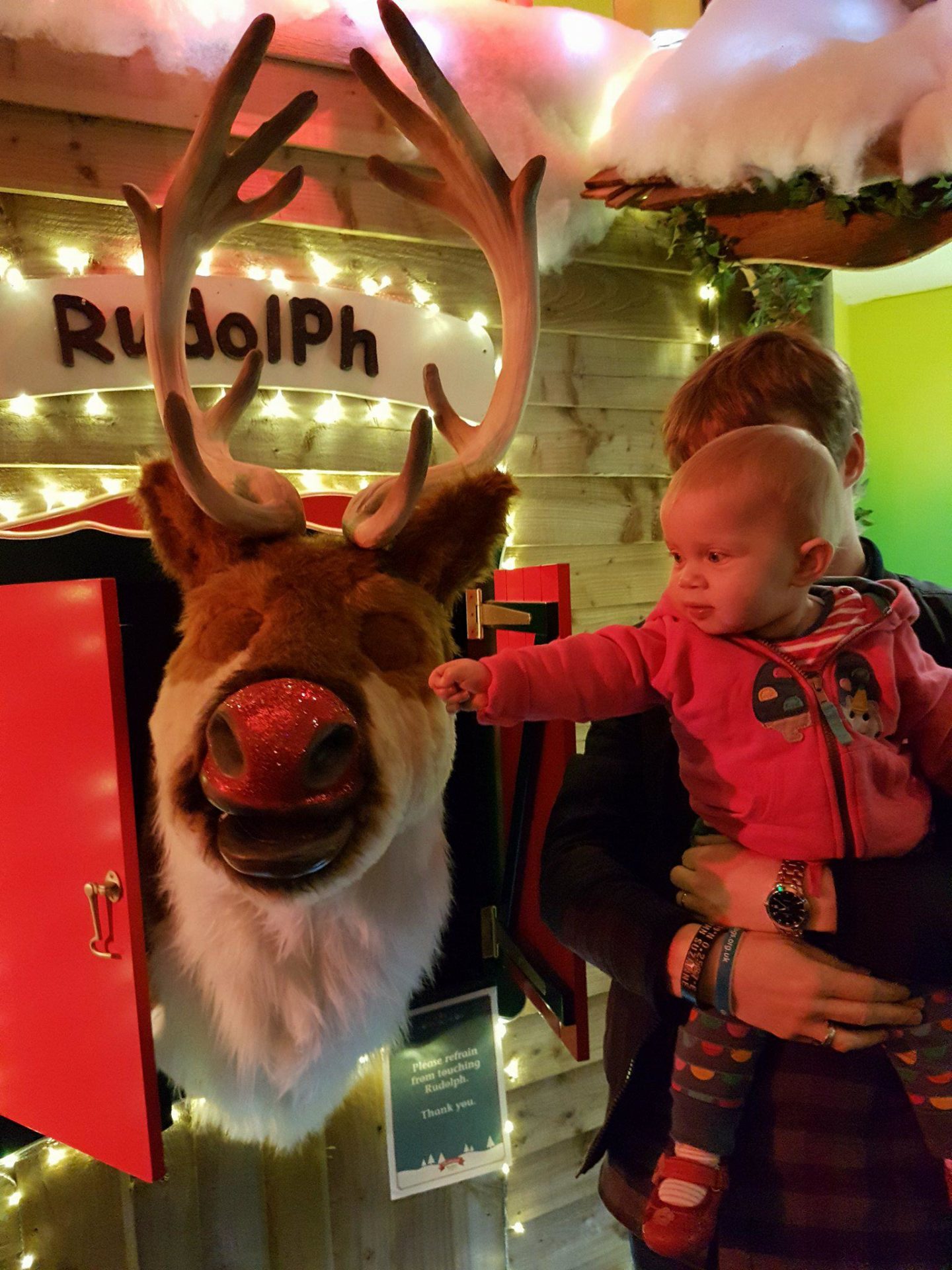 The stage also looked perfect for a photo opportunity. Autumn had different ideas though, as she just kept trying to walk off! 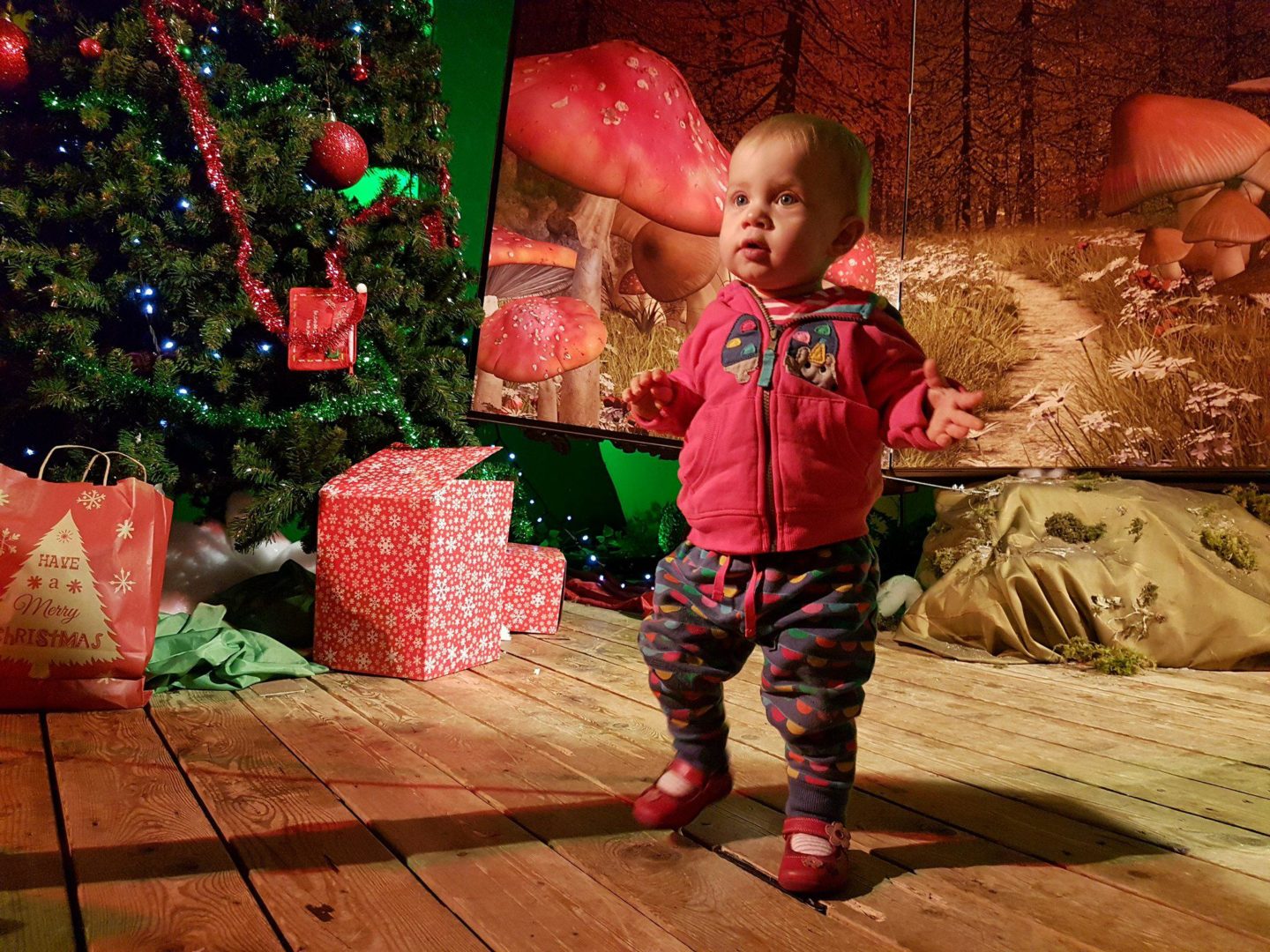 Autumn has done some messy play before, with both us and her childminder. At home, I always try to keep mess to a minimum to some extent. I know I have to clean it up afterwards! As such, I was looking forward to this activity. When we arrived, a member of staff called Megan explained what there was to play with, before letting us unleash our children!

There were four pits:

To the side of the glittery water and mud, there were also trays filled with natural things such as pine cones and leaves.

I stripped Autumn down to her vest and leggings (although I later wished I’d got her down to her nappy). She ventured over to the green and red paint first. She tentatively looked at the sponge and I showed her how to make a print with it. Before I knew it, though, she was moving her hands around in the paint…Then she fell in the paint, getting quite a lot on her face! There was quite a lot of chuckling from around the room. 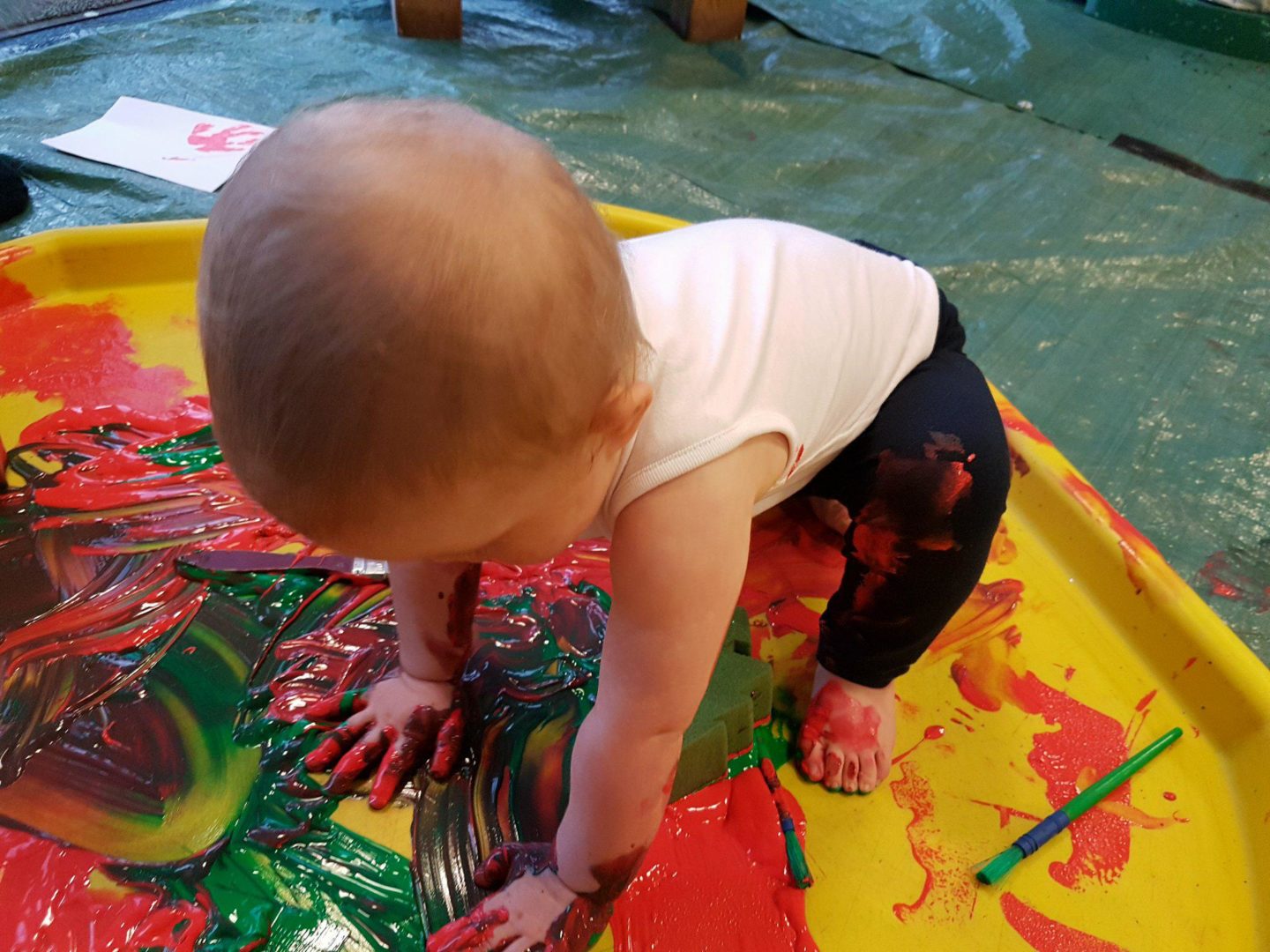 Next, she walked over to the slime. She felt it a little, but wasn’t too sure. Instead, she decided to go and look at the glittery water with Daddy. 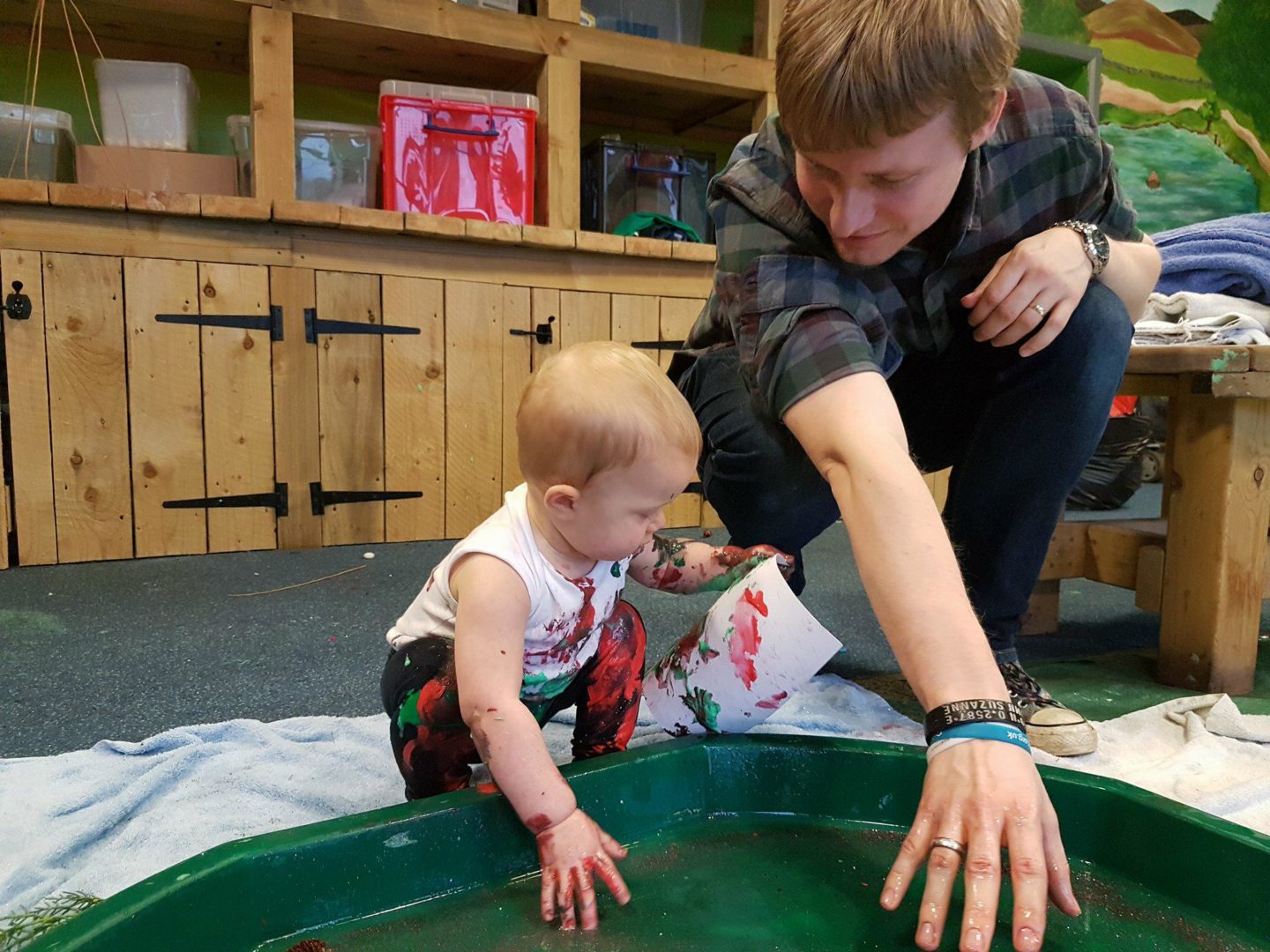 We went and had a look at the glittery mud, but Autumn wasn’t especially interested. I made a clay snail, but she wasn’t too interested in that either. Instead, she went back to the slime. This time, she got right into it and seemed to love how squishy it was.

We got to the point where she was smacking it and waving her arms around, getting Dave and I both slightly splattered in slime. She briefly decided to go back to the paint, where she wasted no time in just diving into it. Just look at that slimey bottom! 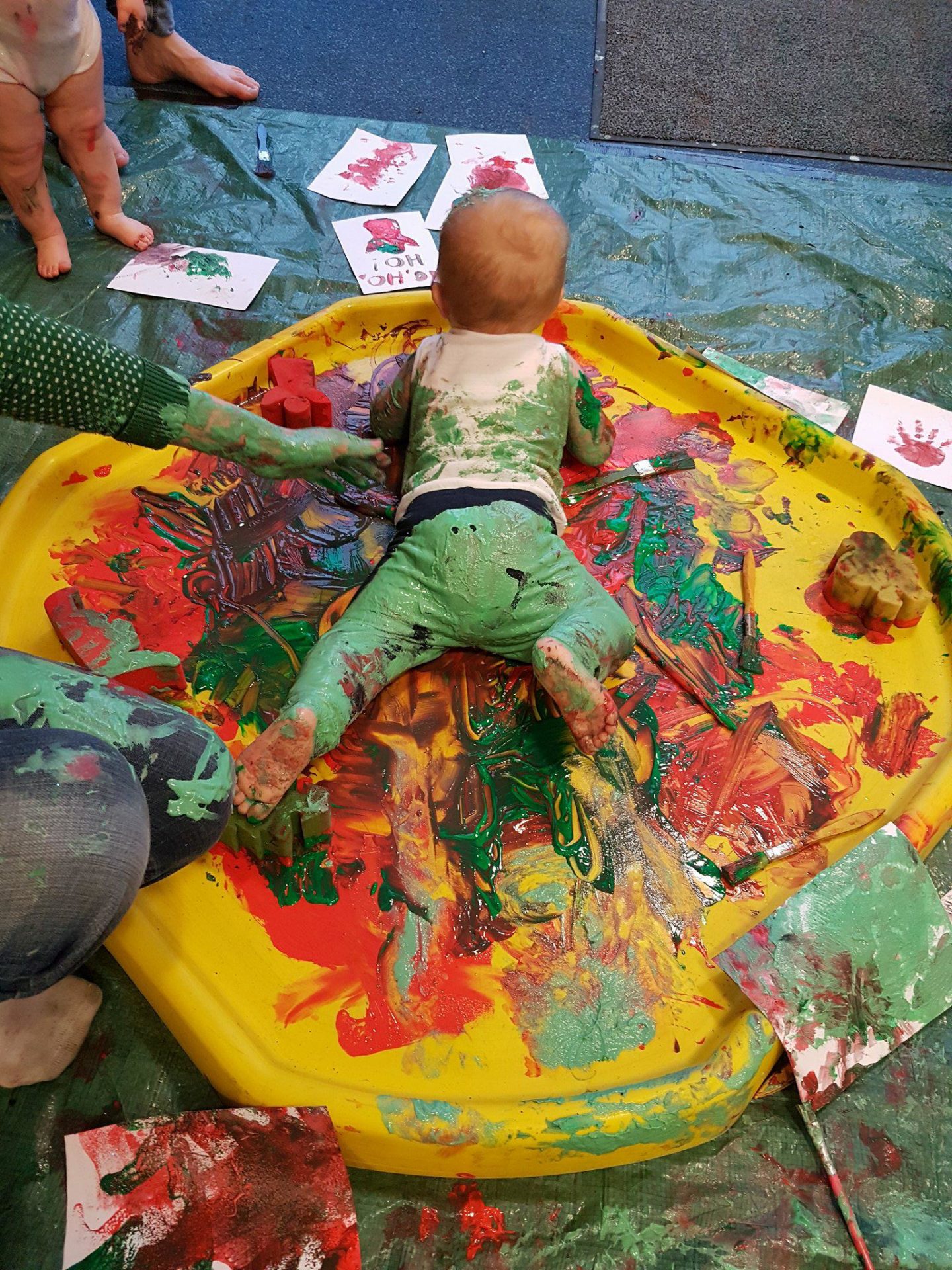 However, the slime was what really captured Autumn’s interest. We stayed there for most of the session. She was delighted by standing and moving her feet around, which was very slippery. She’d fall onto her bottom, laugh, stand back up and keep repeating it!

Megan said that Autumn was THE messiest child she’d ever seen in messy play. Trust my child! We could physically see other parents and children recoiling in horror as this weird alien child got anywhere near them. 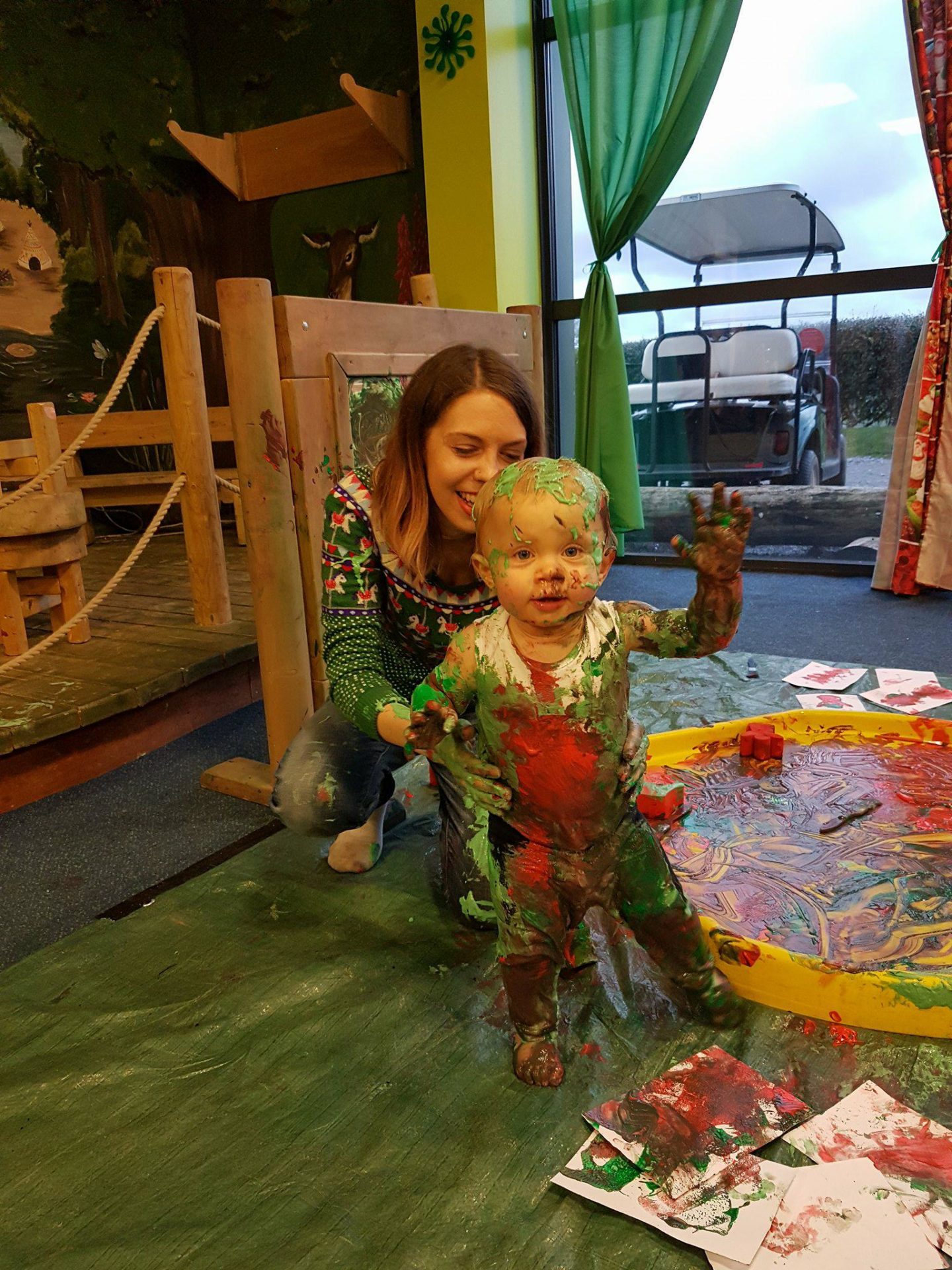 Thank goodness there was a shower in the disabled loo and there were some towels available for us to borrow! 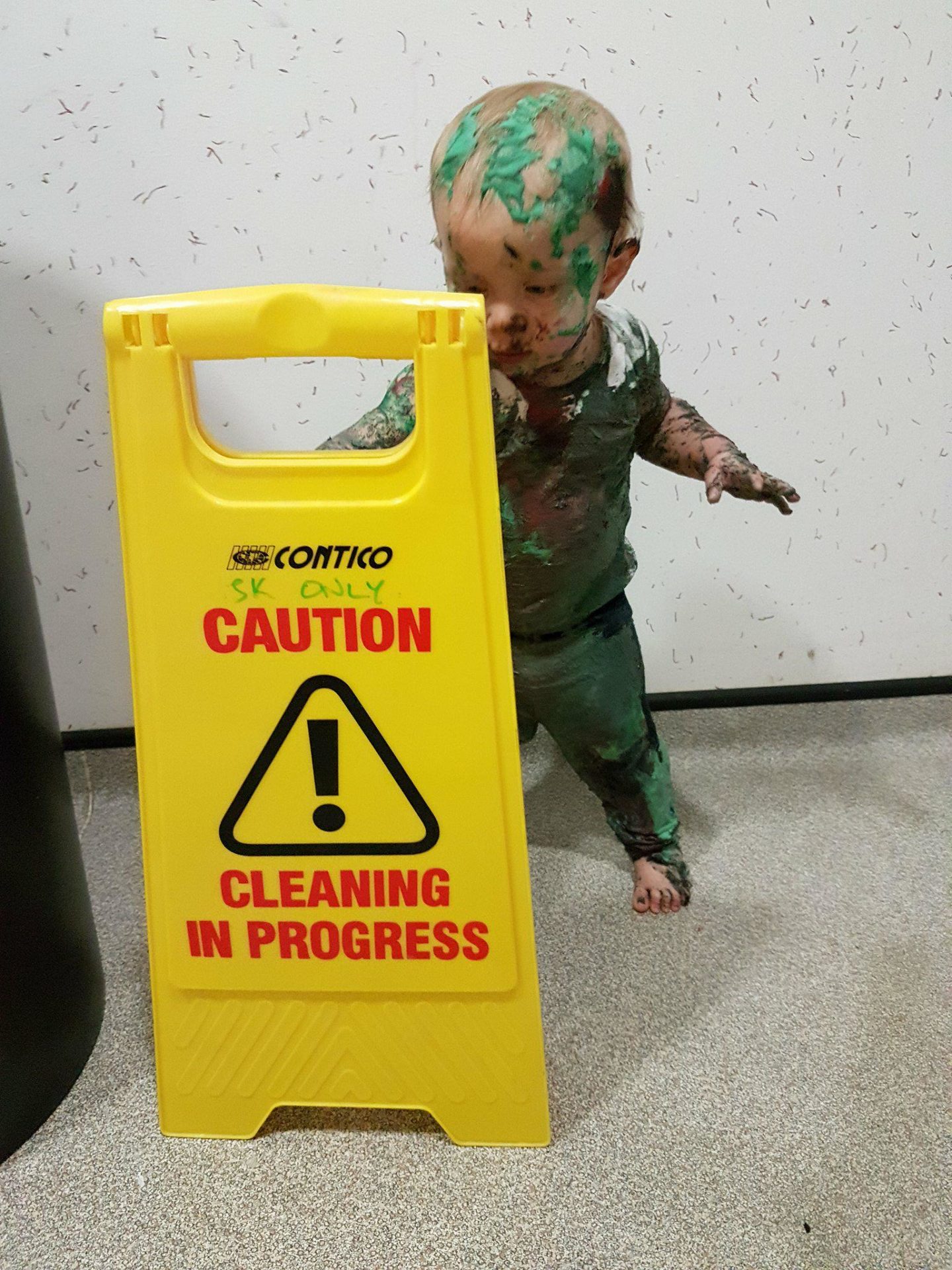 Before the end of the session, Shelby snail came to meet the children. Autumn didn’t notice him enter the room, but as soon as she saw him, she was obsessed! I had to hold her back so that the other children could take their turns. I have to admit, it wasn’t easy due to the amount of slime. She just stared at him when we got to the front of the queue, but got upset when I let the next child have their turn. She kept trying to run back to him! As he left the room, she  waved and said bye whilst trying to chase him. 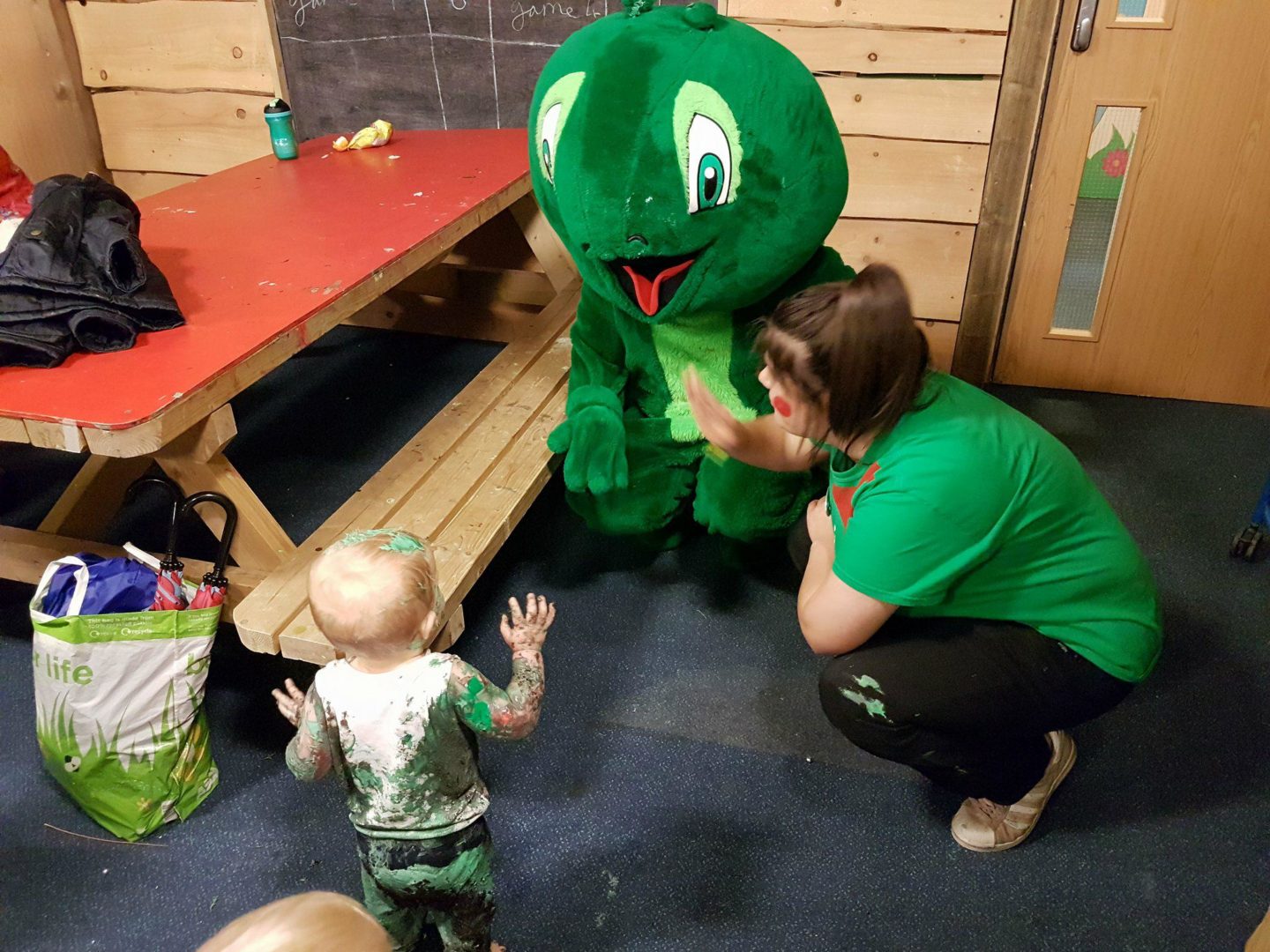 By the way, please don’t let this put you off of Shelby Snail’s Messy Play! None of the other children got anywhere NEAR this messy. Besides, Autumn had a whale of a time!

After all the fun of messy play, we decided to wind down at the Blue Lagoon. I have never been to such an amazing swimming pool. I wish we had something like it in Kent! There was a shallow pool that we explored for a little while. Autumn liked patting the animals on the tiles at the bottom.

When we got into the main pool, we went straight to the lazy river. It was lovely and warm, even as we went outside into the cold November air! The stars were out later in the night, but it must have been cloudy at that point as I couldn’t see any. It was a really amazing experience though, regardless. Autumn hadn’t been in a swimming pool since July so I wasn’t sure how she’d take to it. She absolutely loved it though, and I felt guilty for not taking her to a pool for so long. We’ve just started lessons with Puddleducks again and it’s amazing how much she actually remembers from the summer.

After swimming, we walked down to the adventure centre just in time for the Christmas Parade! We followed a giant snowman down to the village. Many buggies had got caught up for a while at the adventure centre while we gathered. As we went round the corner and they came down the hill, they were all beeping their horns. Something about it really added to the festive spirit!

Once we’d got to the village, the Christmas Festival began. It was bitterly cold, but so lovely and Christmassy to gather with so many other families to sing Christmas songs together! During it, we made a visit to The Chippy which helped with both warmth and post-swimming hunger! The chips and battered halloumi were absolutely amazing from there.

I felt so happy, but also tinged with sadness that we had to leave the next day. I really felt like I wanted to stay until Christmas, just enjoying all the festivities and spending quality time with family!