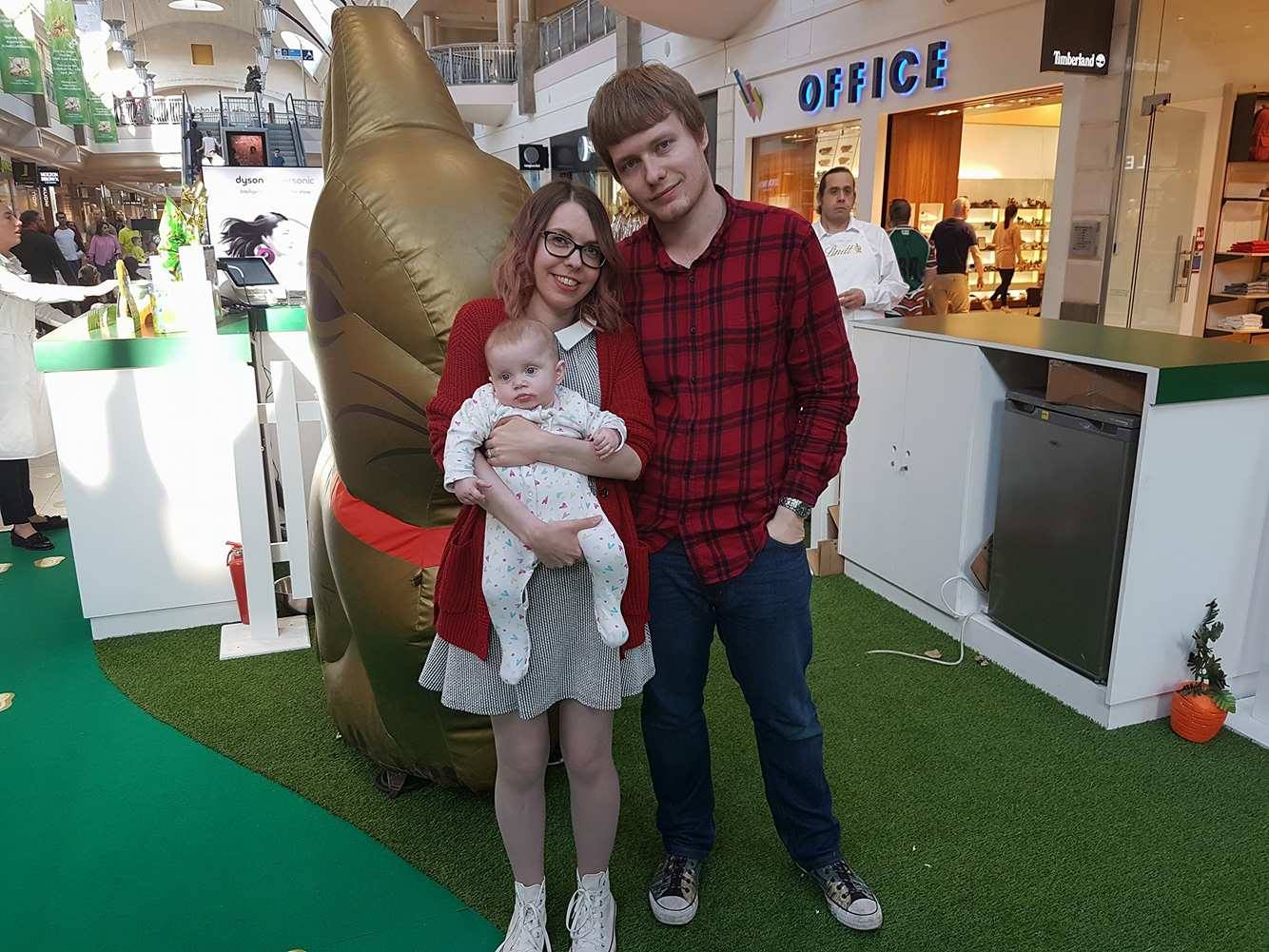 We had a lovely day out on Saturday (8th April). We went to the Baby & Toddler Show at Sandown Park in Surrey. I’m always on the look out for new brands whose products I can try with Autumn. Of course, being a blogger, I’m always interested in working with brands too! Later in the afternoon we found some Lindt bunnies at Bluewater before we went home.

Sandown Park wasn’t too far from us. After a relatively quick journey around the M25, we arrived after about an hour of being in the car. Autumn didn’t look too impressed though! 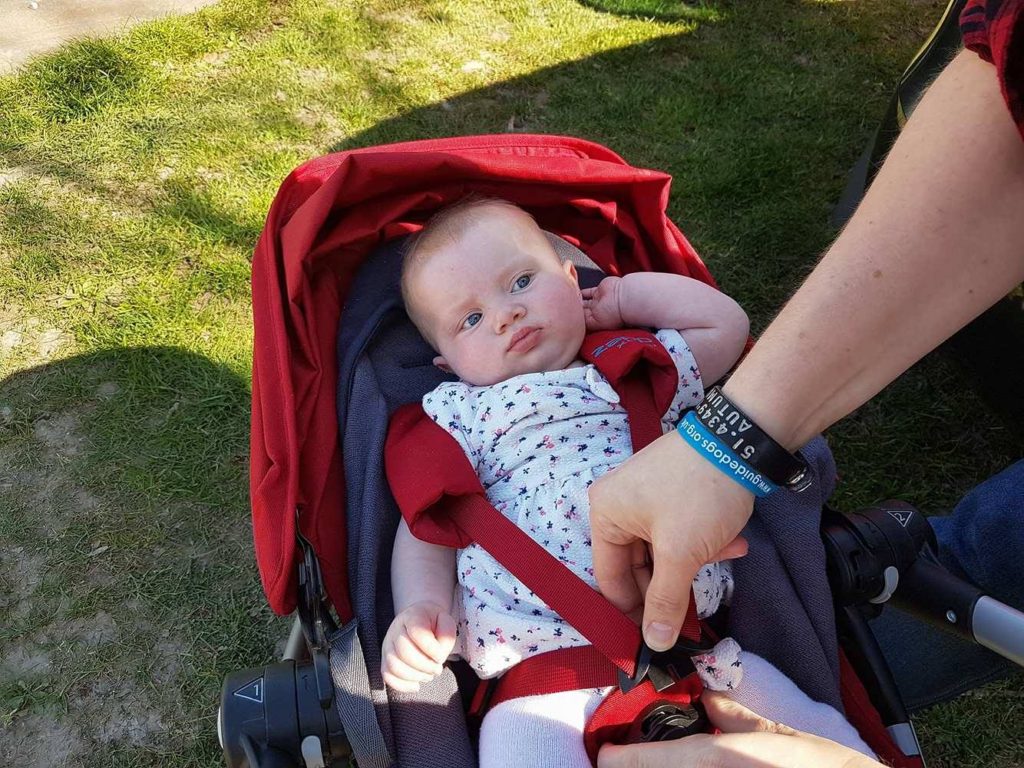 Although the M25 is never particularly fun, some of the rest of the journey was lovely in the sunshine! When we arrived we were raring to go, ready to see what the show had to offer! 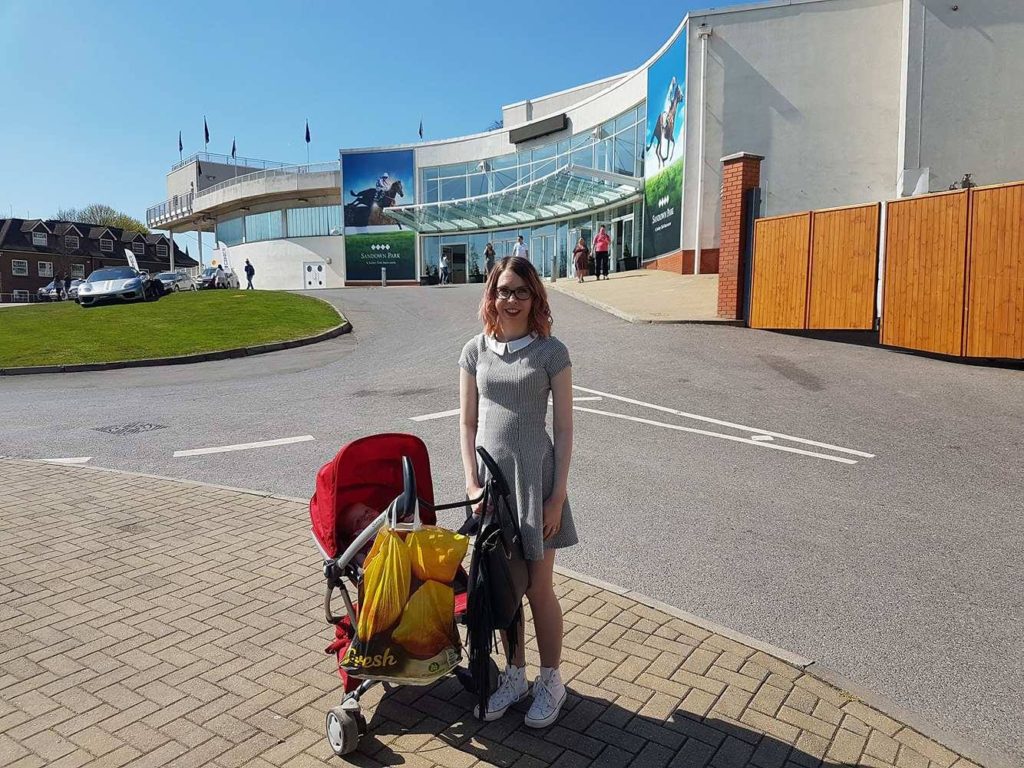 Our first stop was to collect some free samples of Surcare liquid and Metanium nappy rash treatment. Our second stop was at Izmi to borrow a baby carrier. I’d heard about it prior to going to the show, so I sought it out before we got started. We had to leave our pram as collateral (Dave later wished we hadn’t as he had to carry everything!) I’ve not had much success in the past, so thought I’d give it a go while there was someone around who could help. I found it quite straightforward and very comfortable! 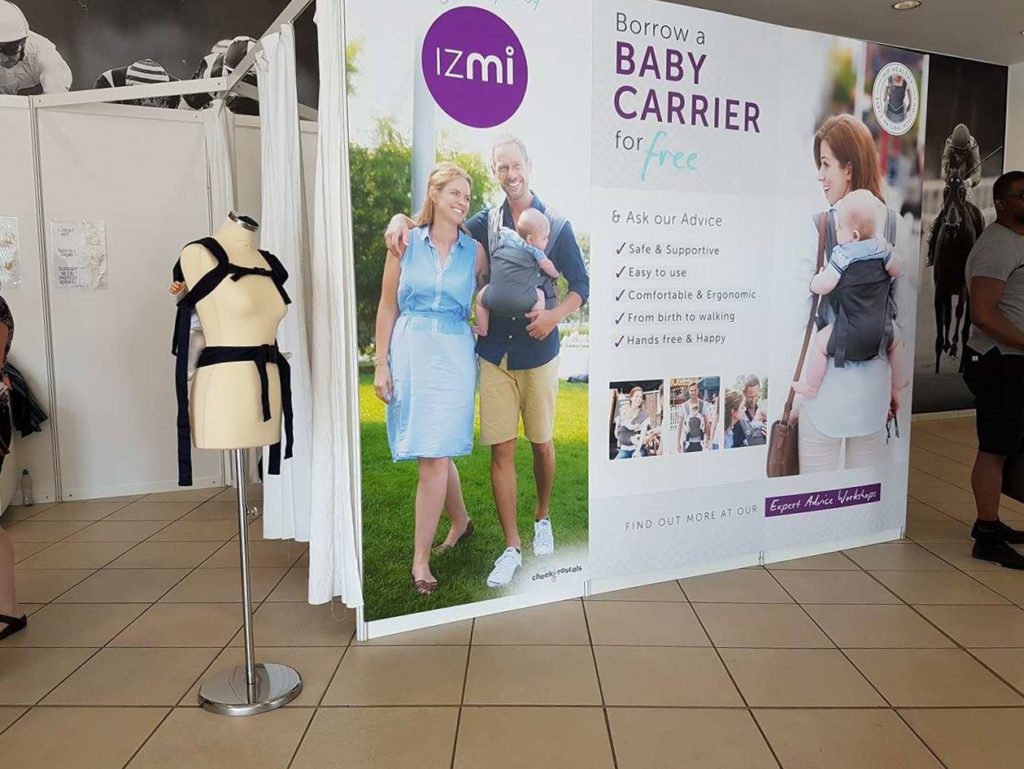 I decided to put Autumn in the carrier facing forwards so that she could look at everything going on around her. She’s very inquisitive so I thought she’d like it. We couldn’t even get her to look towards Dave for this picture, because she was so interested in all the other people around us!

Now that Autumn was comfortable, I was hands-free and Dave had both our bags, we were ready to get started. Seeing the pink carpet and bustling stalls, I couldn’t wait to see what was on offer! Our first stop was MAM. 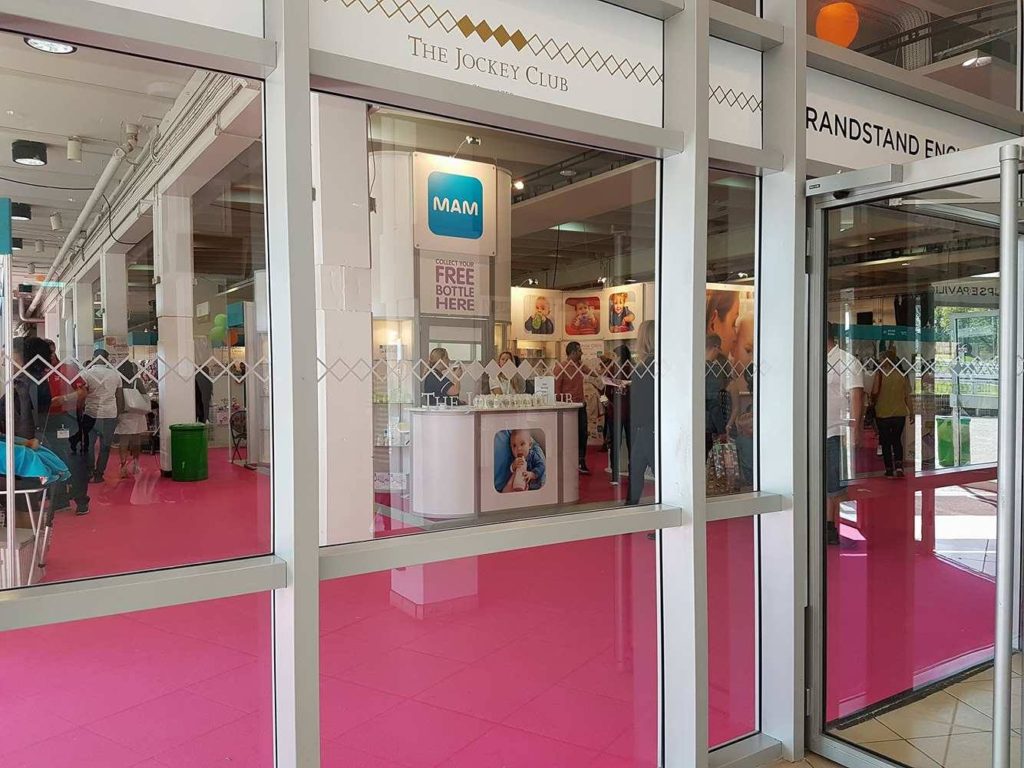 We collected a free bottle from MAM. They were giving away free 4 fl oz bottles. Although Autumn usually drinks 7 or 8 fl oz, we still find the smaller bottles useful sometimes. Autumn seemed to see lots of things she liked at the MAM stall especially the bottles. I think she liked her hands best of all, though! 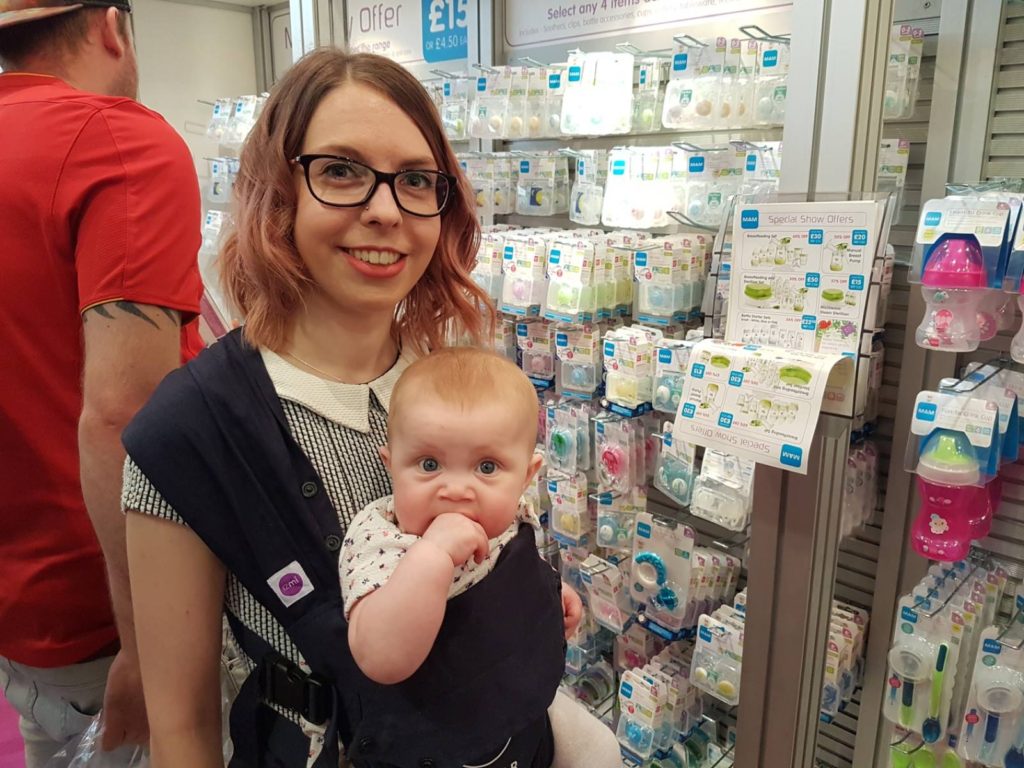 I took advantage of the show offers and lack of postage and packaging. They were doing an offer where you could buy 4 items for £15. Autumn needs the next size teat for her bottles, so we got some of those. We also needed some more dummies and dummy clips. As a bonus we got a little teething toy that we thought she’d like to have a chew on. 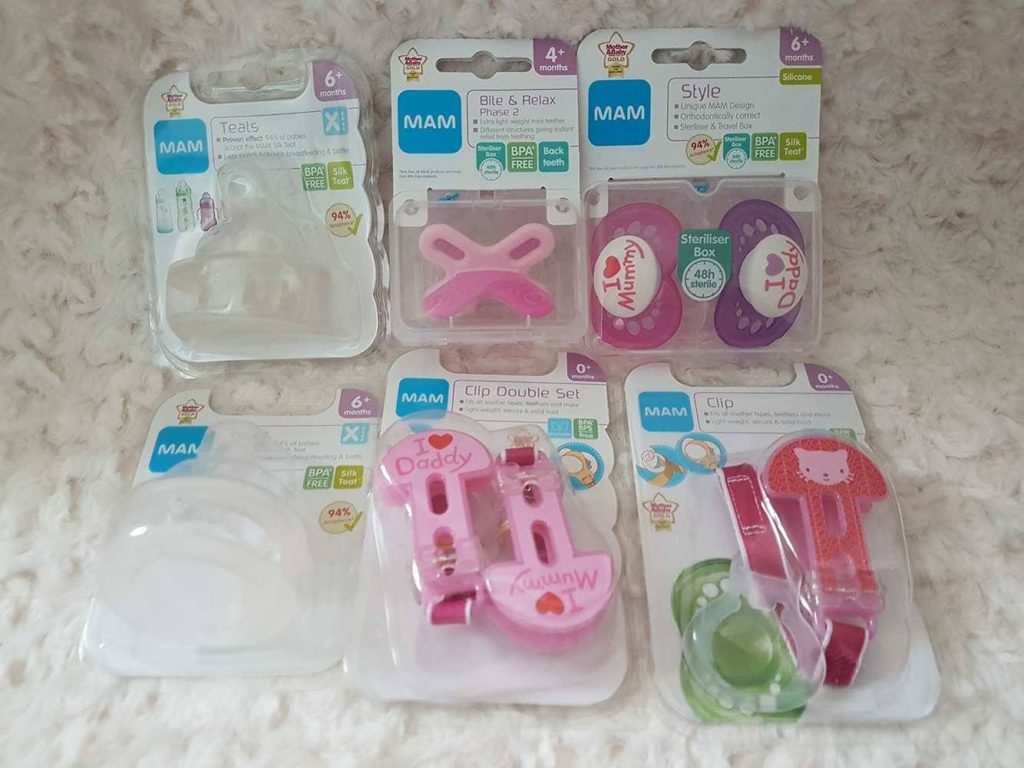 Next, we visited the Babease stall. The man there was called Tom was lovely and very passionate about Babease. I’d heard about them before and actually bought one of their products last week for Autumn. However, I wasn’t aware just how good they were! Tom explained how they’re not “baby food”, they’re “food for babies“. They ensure that they have the right amount of nutrition and calories required for babies. I was stunned to find out that a lot of baby foods don’t contain enough calories and protein. Most have almost 20% less calories than they should, in fact. Babease are carefully put together so that you know that your baby is getting exactly what they need. Tom gave us 6 pouches for Autumn to try. She had pumpkin & pea for lunch yesterday. If I’m honest, it didn’t look especially appetising, but she loved it! 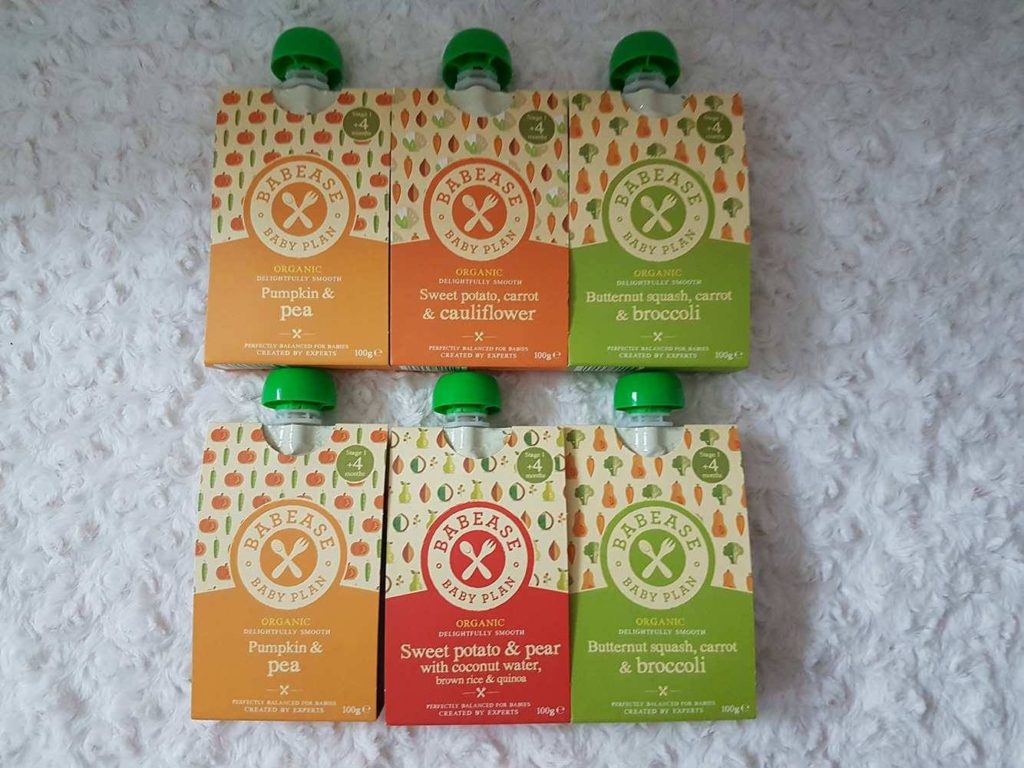 As well as the pouches, Tom also gave me us a Babease canvas bag and bib with a butternut squash on them. With such a cute design, I’ll definitely be using them! It could be a good talking point at baby groups. He also gave me a couple of vouchers to use in Tesco – brilliant!

I was so excited to see that Gerry the Giraffe was at the show. He is a friendly looking giraffe that rocks babies for you so that you don’t have to. Autumn has mostly outgrown the need for rocking now, but I thought she’d love a book about Gerry the Giraffe! The illustrations and story are lovely and it has textures for her to feel.

We visited the Nattou stand, which had such beautiful products. I was so tempted to get a rocking elephant or unicorn for Autumn, but settled on a unicorn “Baby on board” sign for my car.

The Cheeky Chompers stall was also definitely worth a visit. There were so many gorgeous designs of bibs, as well as comfort blankets. I chose two neckerchew bibs for Autumn, as she loves chewing on her bibs and I thought it might help her with her teething more than just chewing on material. One of the ones I chose has a beautiful Joules print on it.

At the Nibbling stall I chose a beautiful dummy clip for her in white, mint blue and pink. I can think of a few outfits this summer that it’ll look gorgeous clipped to. 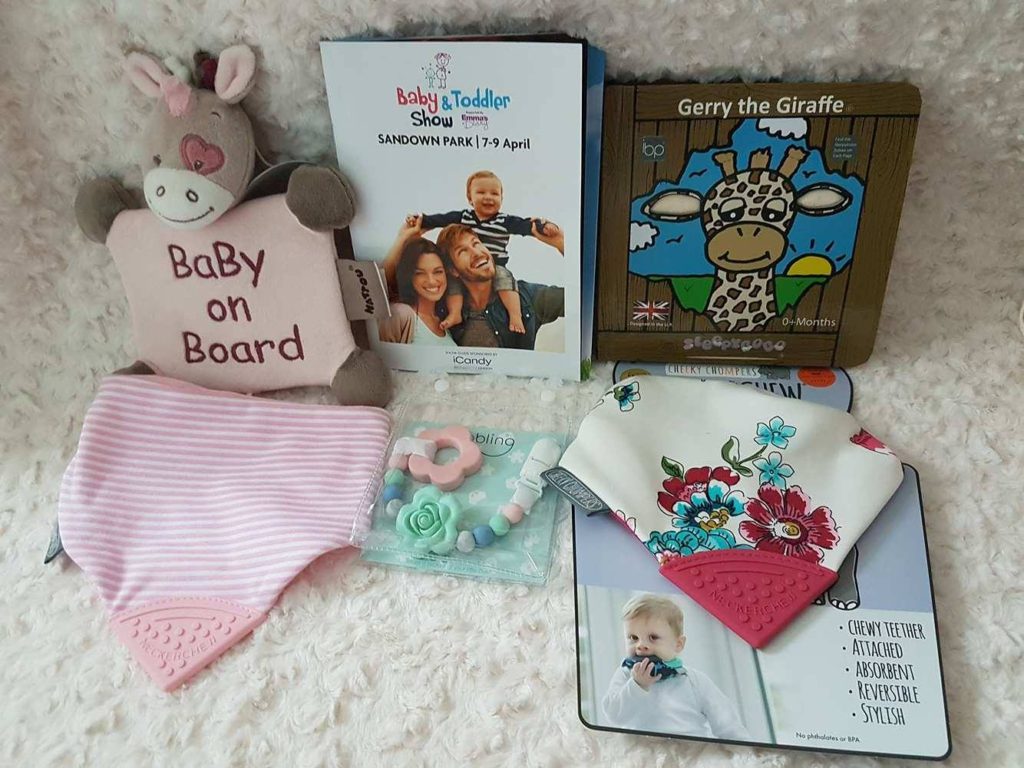 We walked past the big ticket items such as cots and prams. We already have those and there’s no budget and little room in our house for more! We went to the changing area which was well equipped with nappies and baby wipes. While we were there we also picked up a free sample of Emma’s Kitchen The Yellow One while we were there. Then it was time to return the baby carrier and leave. Autumn seemed happy that it was time to go! 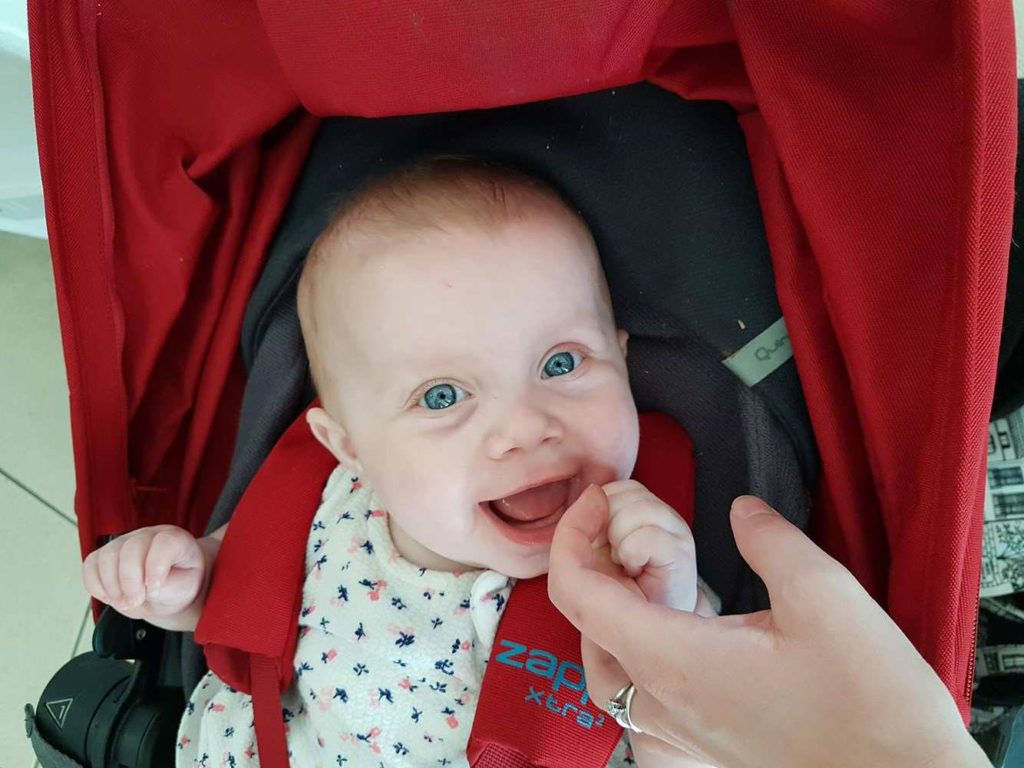 Dave was also happy to leave and have the Quinny back. He’d been carrying all the bags that you can see next to it here! You can see that Autumn has now outgrown her from birth inlay and now needs to use the pushchair in the usual way. Unfortunately, she had to use it like this as Dave hadn’t realised she’s such a big girl now and forgot the necessary attachments. 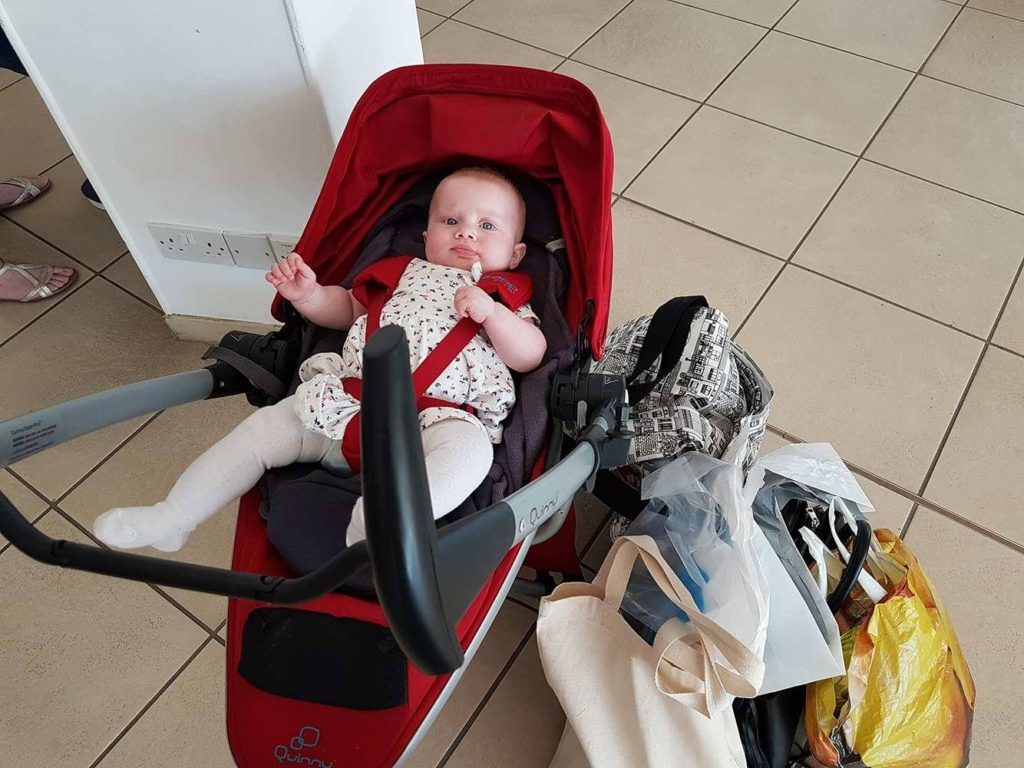 Despite changing her nappy only 5 minutes previously, when we got back to the car there was a suspicious smell! As such, we ended up having an al fresco nappy change in the car park.  She ended up having an outfit change too! We got a few strange looks, but Autumn was happy enough giggling at her daddy. 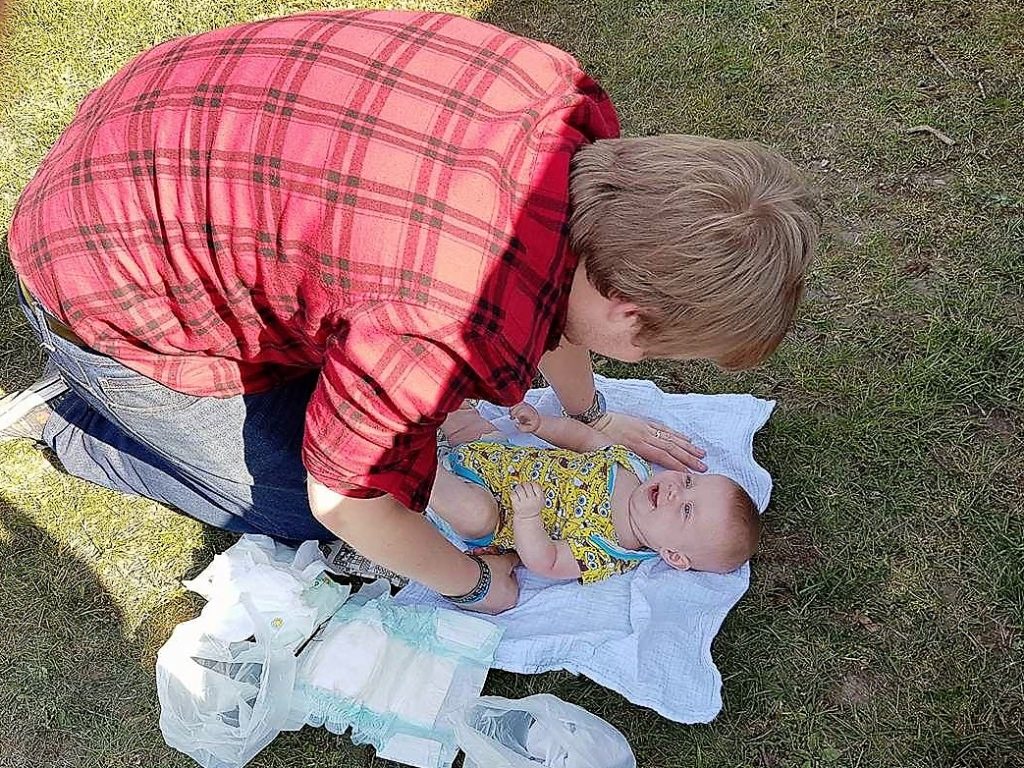 We decided to visit Bluewater shopping centre on the way home. We needed a few bits and bobs from Mothercare, including flatter feeding spoons than the ones we had. As we were walking along, we were approached by a man in a white apron who works for Lindt. “Would you like to come and count the bunnies?” he asked us. “But…isn’t she too little?” I asked him. He laughed and said we were welcome to go in. “You need to help these guys out with their counting!” he said to Autumn, tickling her arm.

We went into the Lindt Gold Bunny Hunt and started counting the bunnies, but once again, Autumn was more interested in chewing her hand! 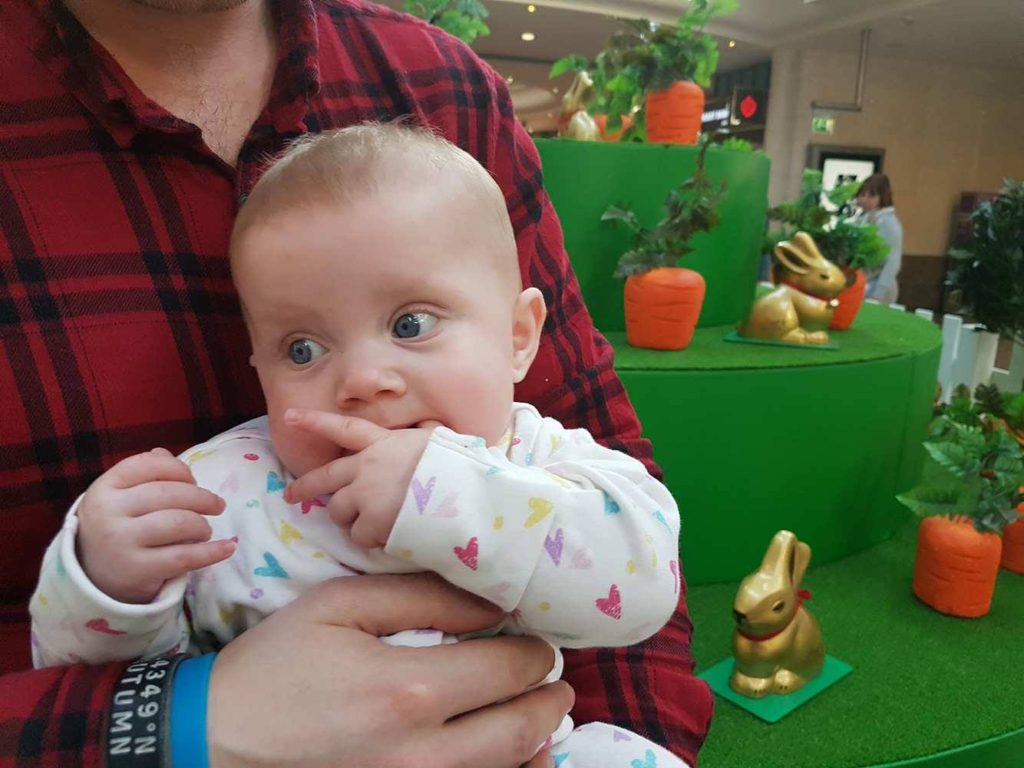 There was a large inflatable Lindt bunny at the end of the trail. I’d actually quite like to have one in my garden! The lovely staff took our photo with Autumn by it. 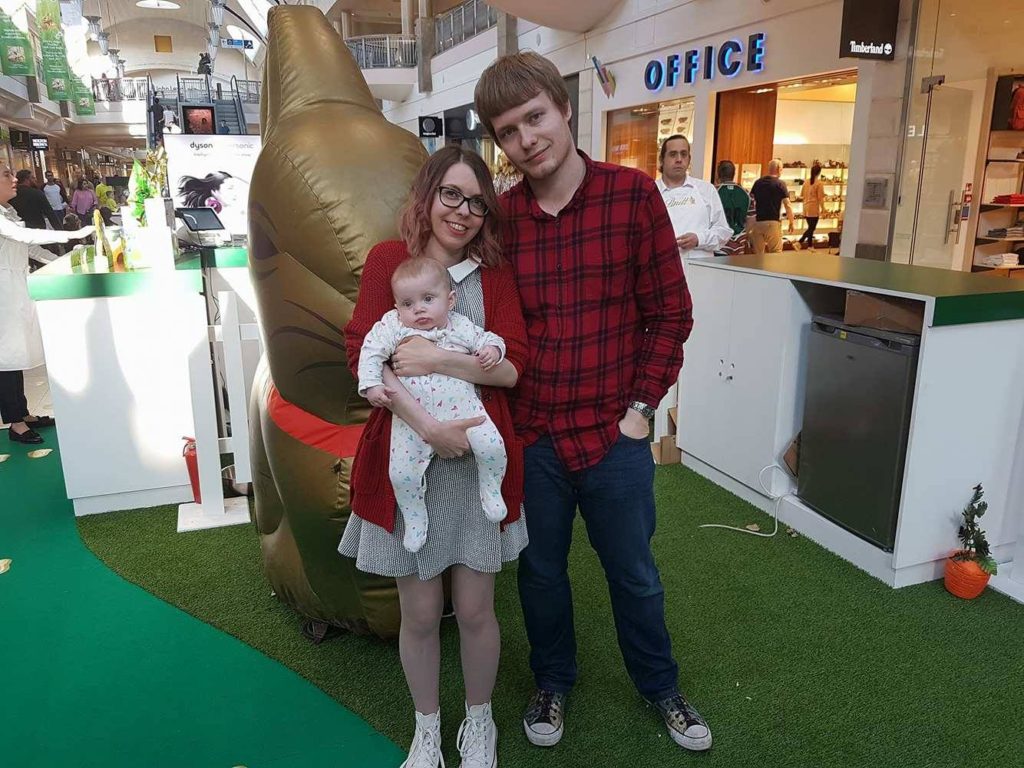 As we left the trail, we were asked how many bunnies we’d counted. I’d counted 12. I don’t know whether it was correct or not, but we were awarded with 3 small Lindt bunnies. Yum! You can find out where your nearest Lindt Gold Bunny Hunt is here. 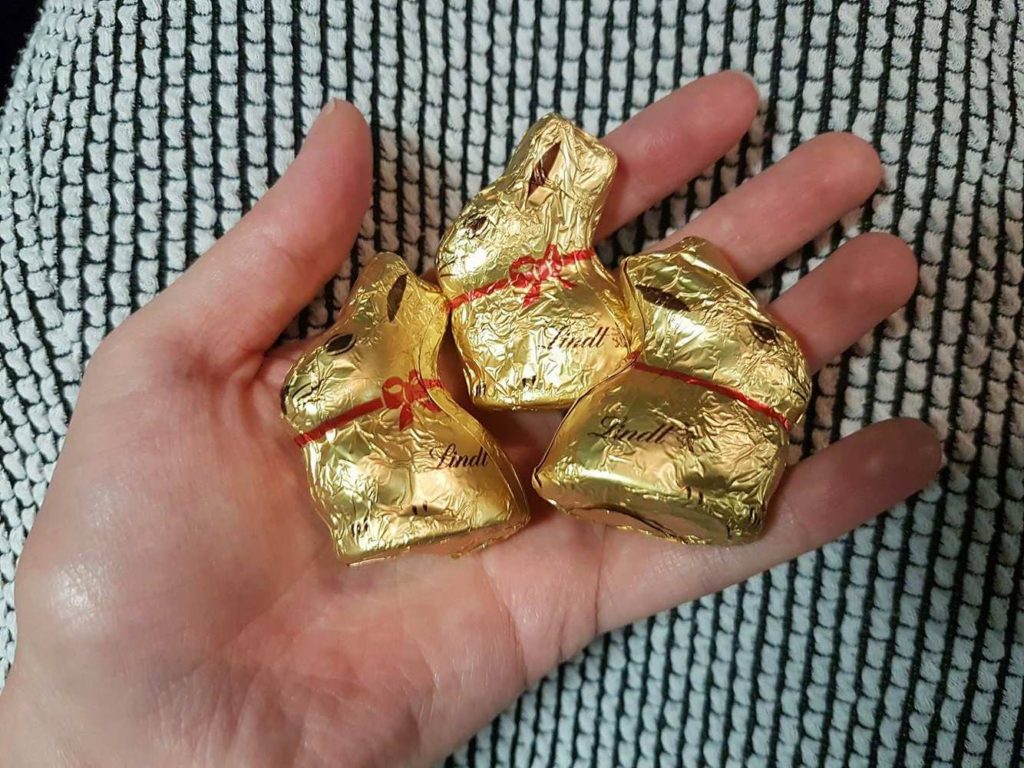 When we left Bluewater, we saw a HUGE inflatable Lindt bunny outside on one of the roundabouts! If only they made a chocolate version this big! 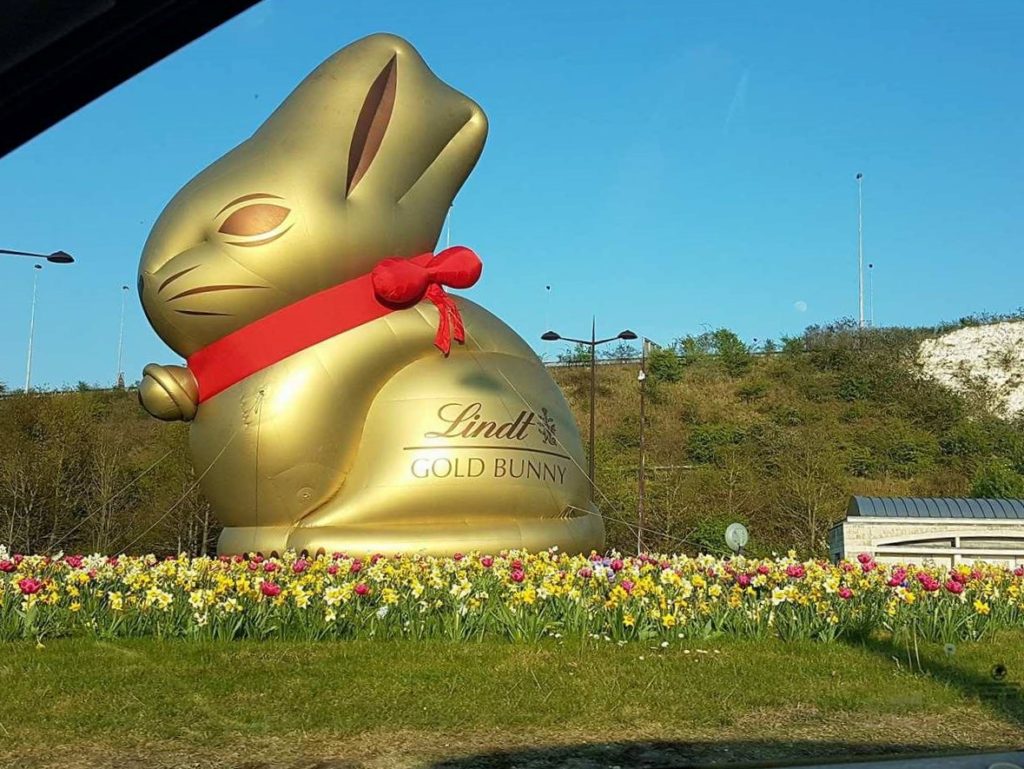 Have you ever been to a baby and toddler show?  Would you eat a massive Lindt gold bunny? Let me know in the comments below!