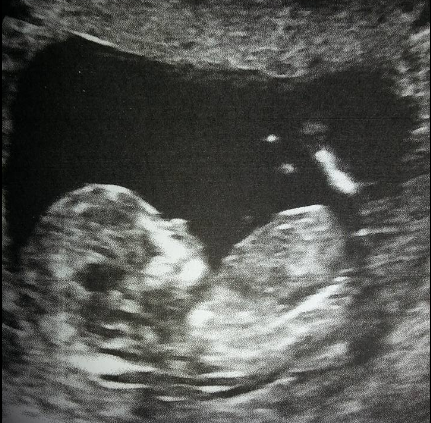 I personally started feeling like I was a mum as soon as I saw the word ‘Pregnant’ on the pregnancy test I’d just taken.

My responsibilities as a mother started from that point:

To me, although the baby was only just beginning to grow and was the size of a poppy seed, there was a tiny little life inside me already and I was its mummy. I was already acting like a mum, doing everything I could to keep my child safe and healthy.

I think the first time I started to properly feel like a mummy though, was when I began to have a bump that was defined enough to make me look pregnant. As I’m so petite, this happened quite quickly. In my mind, I looked undeniably pregnant by 12 weeks and I rotated the same 2 baggy jumpers when I was at work to hide it until I had my scan.

This was taken when I was around 14 weeks pregnant:

As time went on, my maternal feelings intensified. Particularly after the scans at the hospital, as we could see that there was a proper tiny human in there! When I was in bed the night after the first scan, I felt flutters for the first time. Those tiny little kicks made it feel so much more real too. I’d talk to her, sing to her and place my hand where she was kicking so that she could feel my presence. I loved how the kicks intensified week after week (although not quite as much later in the pregnancy as sometimes she’d kick me so hard it was painful and left me feeling bruised!)

My maternal feelings intensified again after we had the 4D scan. As I could see in much better detail what she looked like and that she had hair, it felt almost like I’d met her. By the time she was born, I definitely felt like her mummy already. However, I know some women don’t properly feel like a mummy until their baby is born, or even for a little while after birth and I can understand that too.

When did you first feel like you were a mum? I’d love to hear from you, please comment below!

37 thoughts on “When do you start feeling like a mother?”