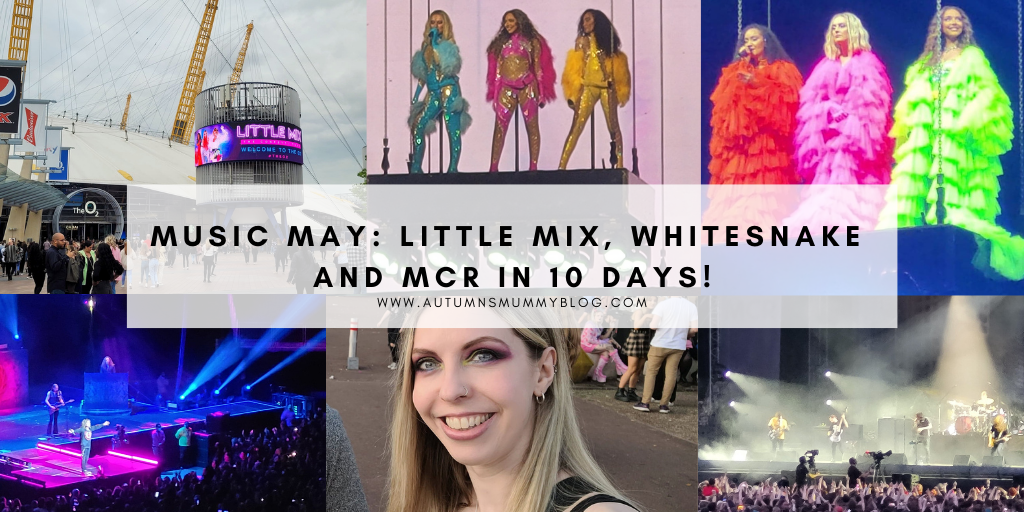 In the wake of the pandemic, shows and concerts are finally coming back and it’s so good to see live music again. Due to Covid-19, a lot of things I was meant to go and see in 2020 were rescheduled. As such, I’m going to a lot of shows in the space of a month or so. May has been especially busy! In fact, in the space of 10 days in the last fortnight I went to see four shows. Bearing in mind I’d never been to the O2 Arena in London before, I actually ended up there 3 times in the space of 6 days. It’s funny how things work out!

The first group I went to see was Little Mix. Yes, they’re not my usual taste in music. However, there’s something about them that I’ve loved since the start when they were put together on the X Factor. I’ve never been to see them on tour before, so when I found out they were going on hiatus I spent my birthday money on tickets for Thursday 12th May, which was the first night at the O2.

Who I was going with changed several times due to unforeseen circumstances. It was a school night, which made it harder to find someone to go with. Although I had to be at work for 7am the next morning, apparently nobody was quite as crazy as me! Fortunately, my brother stepped in at the last minute so I wasn’t on my own.

We were in a VERY high up seat, which was a bit anxiety inducing at first. However, we soon got used to it and we had quite a good vantage point to see everything that was going on on the stage. It was such a good show that really felt like a celebration of the last 10 years. The outfits and choreography were amazing.

As for the vocals, even my brother was surprised about how good they were live. Unfortunately, Perrie had a throat infection. Her doctor had told her to rest her voice, but she said she wasn’t missing the last three nights of the tour. She was clearly taking it easy and got the crowd to sing where some of her more challenging vocals would have been. It was understandable and I wouldn’t have wanted her to push herself any more, but I still missed what could have been!

I was absolutely buzzing after Little Mix and wished so badly that I could be there on the last night. Still, I accepted that I wouldn’t be and was looking forward to watching the live stream of the last show (for now…) Autumn had been disappointed not to come with me to the O2, but of course I couldn’t let her as she had school the next day. However, I was happy for her to stay up on Saturday 14th and watch the live stream with me. She was really excited about it!

Still, on the day, I thought I’d just have a look and see if there were any tickets available. To my surprise, there were! While I was asking my husband if I could go with Autumn, they unsurprisingly were snapped up. Now I knew there could be tickets available, though, I kept checking. About an hour later, quite a few came up and I pounced on two of them. My heart was beating fast as I managed to secure them. I was so excited! Autumn was going to be going to her first show and would be so excited!

This time, we were down on the floor near the back. Autumn could just about see the stage sometimes, standing on her seat. The rest of the time, she could see the screens. The atmosphere was amazing and I couldn’t quite believe we were there.

When Little Mix came out on the flying stage, we were so close that we could clearly see their facial expressions and makeup glittering.

We had so much fun dancing and singing along. While I’d taken lots of videos and photos on the first night, this time I soaked up the atmosphere more. Autumn was clearly having a brilliant time too! One of the best things was that I got to see Love Me Or Leave Me performed live. I’ve always really loved that song and thought it would be amazing live. I was not left disappointed at all. All the girls have such stunning voices. Perrie didn’t seem to be holding back either, as it was the last night! Autumn couldn’t wait for Confetti and she was delighted as each blast of confetti fell from the ceiling!

Being there for the last performance of Between Us and seeing the girls and dancers taking their final bow and waving as they left the stage was an experience I’ll never forget. It was so special sharing it with my baby girl, too.

Only two days later, I was off to see Whitesnake, Europe and Foreigner with my Dad! This time, we were in one of the business suites. Although we still had to queue up for merch, it felt like such a VIP experience not having to queue for snacks and toilets after Little Mix!

The scary thing was that the lead singers of all these bands had more energy than me, despite all being around twice my age (or more!) Growing up listening to them all, it was great to hear them live on Whitesnake’s farewell tour.

I didn’t find the acoustics as good as they were for Little Mix, disappointingly. However, it was still a great show. All bands had great stage presence and really entertained us. Also, the solos from the drummer and guitarists of Whitesnake were absolutely mind blowing!

I feel like this one needs it’s whole own separate post really! What can I say? Wow. I’ve been a fan of My Chem since I was 12. When The Black Parade came out, suddenly everyone else around caught on to them. Unfortunately, by then I had bad anxiety triggered by the death of my Grandad. It was heart-breaking for me seeing their pictures of going to see MCR on MySpace and listening to their excitement at school before and after the show while I was stuck at home.

As such, my feelings about this show unlike the others weren’t just like “Yay! I’m going to see this awesome band/group!” It was a lot more emotional than that. My Chemical Romance and their music were so important to me in my teenage years. I just kept imagining how amazed and excited my 15 year old self would be to know I made it to one of their shows and how beyond proud she’d be! They were so important to me, that I actually wrote my GCSE English Language essay about Gerard Way. After sitting there, writing away for an hour about him, his substance abuse and overcoming it, I worried that I’d just completely messed up. I’d just been writing so passionately that I hadn’t paid much attention to what vocabulary or grammar I’d been using. On results day, I couldn’t believe my eyes when I saw my results for English Language. A*. For writing about Gerard Way!

Goodness knows what my husband thought when, aged 16, he came to my house for the first time and saw my walls adorned with Gerard (as well as other rock and metal musicians). Even my Nan was in on it. I fondly remember watching MCR performing on the Jonathan Ross Show one week and gushing about him to her and her reciprocating. She was definitely excited for me to be seeing them the other day!

Anyway, Gerard obsession aside, they were important. Their music got me through a lot and when this tour came up, I just had to buy tickets for it. The show was originally meant to be in 2020, but hello Covid-19 pandemic. I guess in a way, the additional 2 year wait to see them just made it all the more sweeter after the 16 year wait I’d already had.

For some reason, they didn’t come to London so my Dad and I trekked up to Milton Keynes to see them. It was an hour and 40 minutes in the car, followed by a 15 minute walk, going to the wrong bus stop but then eventually finding the right one and taking the 10 minute shuttle bus to Stadium MK. For me, it was all totally worth it. There was so much excitable energy on the bus and in the stadium was palpable.

I couldn’t believe I was there, I really just felt like I needed to pinch myself. I think the smile on my face says it all, really!

MCR were changing up the set list every night and the third night at Milton Keynes miraculously was my favourite yet. It was practically my perfect setlist. I just couldn’t believe my luck. It was so amazing and I had the best time jumping and singing along!

Plus, there was the Gerardboard moment (you had to be there).

They were so good live and I just…can’t even describe how insanely happy I was to be there. I still can’t quite believe it!

2 thoughts on “Music May: Little Mix, Whitesnake and MCR in 10 days!”