It was really weird trying to get back into homeschooling after two weeks of Easter holidays! However, I think we both welcomed the routine of homeschool back in our lives. Although, I did miss not having to wake up as early! Autumn was so excited to start “Apple class” again on Monday…although why I scheduled in Joe Wicks first thing on a Monday morning after a break is beyond me. Needless to say, I was not quite as raring to go!

Here’s what we got up to (with approximate timings):

9.30 – Discussion about the weather, day and date

9.45 – We looked at the life cycle of a butterfly, acting out each stage. For example, curling up as an egg and wiggling as a caterpillar. Our caterpillars had formed chrysalises at the beginning of the break, turning into butterflies at the end of the second week. We discussed their journey and how we released them on Sunday 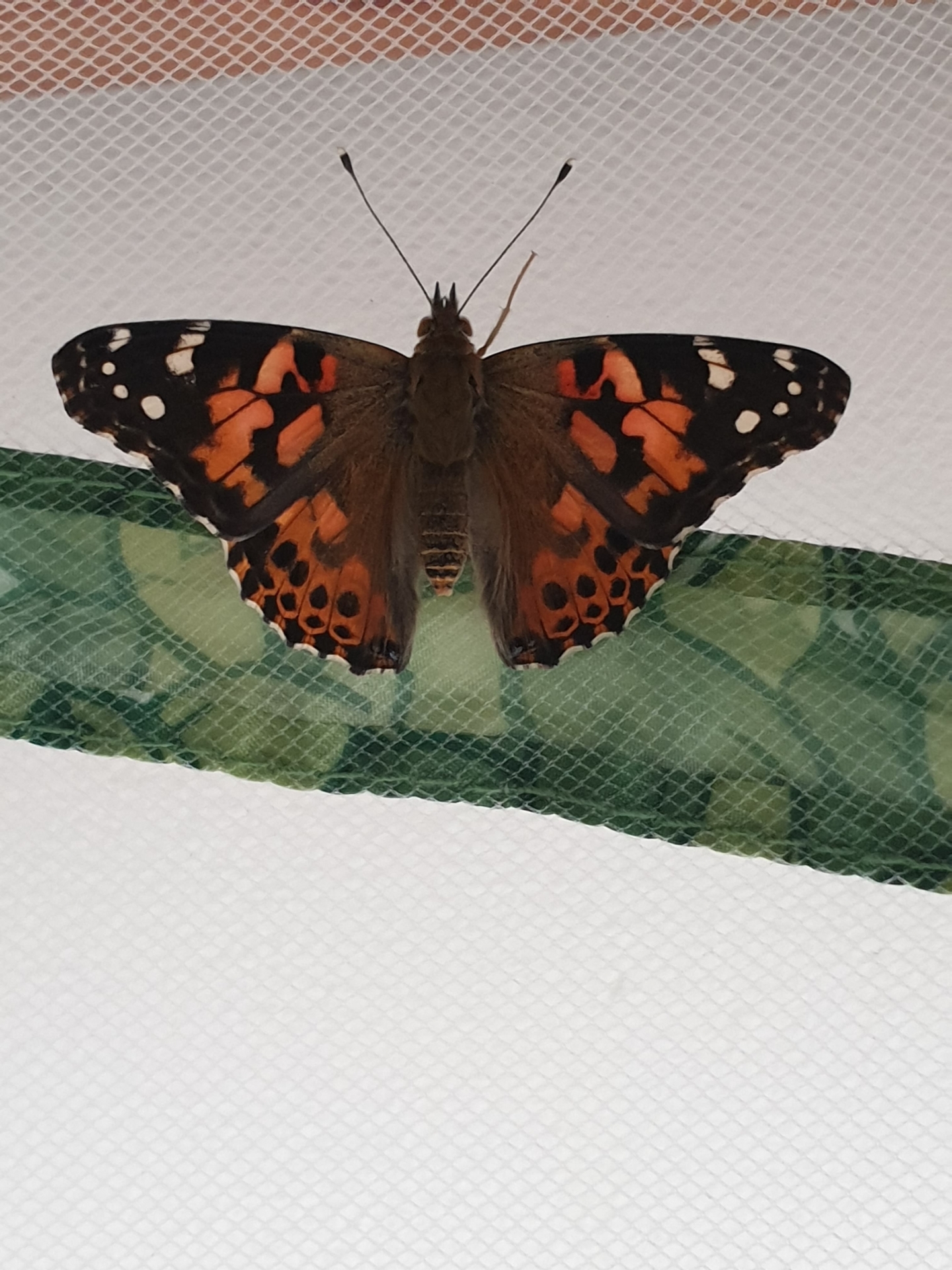 10.00 – We made a hand print butterfly! Autumn chose the colours red and green for it

I adored the end result – definitely one of those artworks to be treasured! The expression she gave it is fantastic. 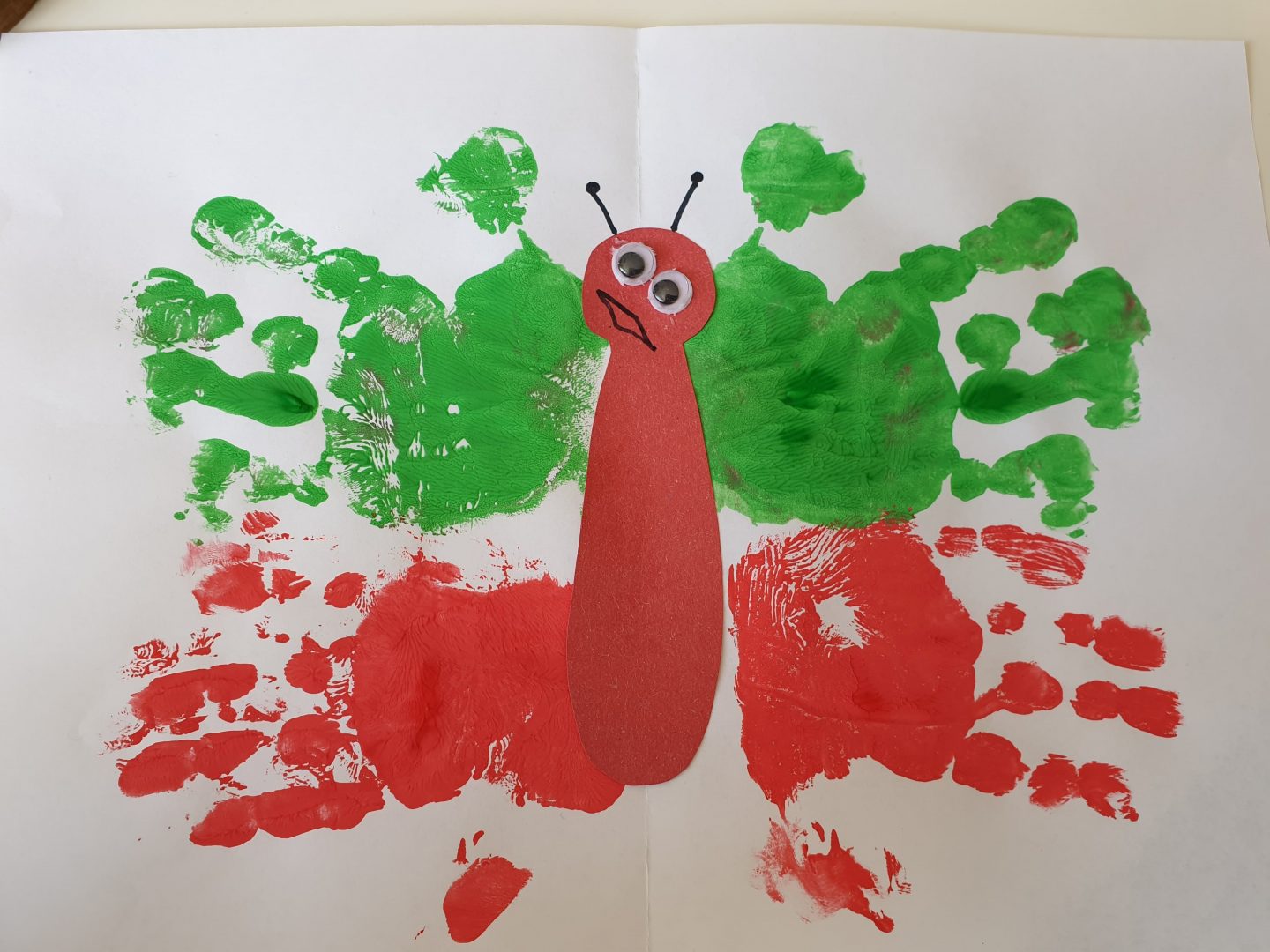 10.45 – We headed to the garden, where Autumn helped me to pot a fig tree and plant potatoes, strawberries and rhubarb! She can be a bit fussy about dirt sometimes, so I was proud to see her getting stuck in with mucky compost hands. We had lots of fun and she was so excited every time she found a worm! 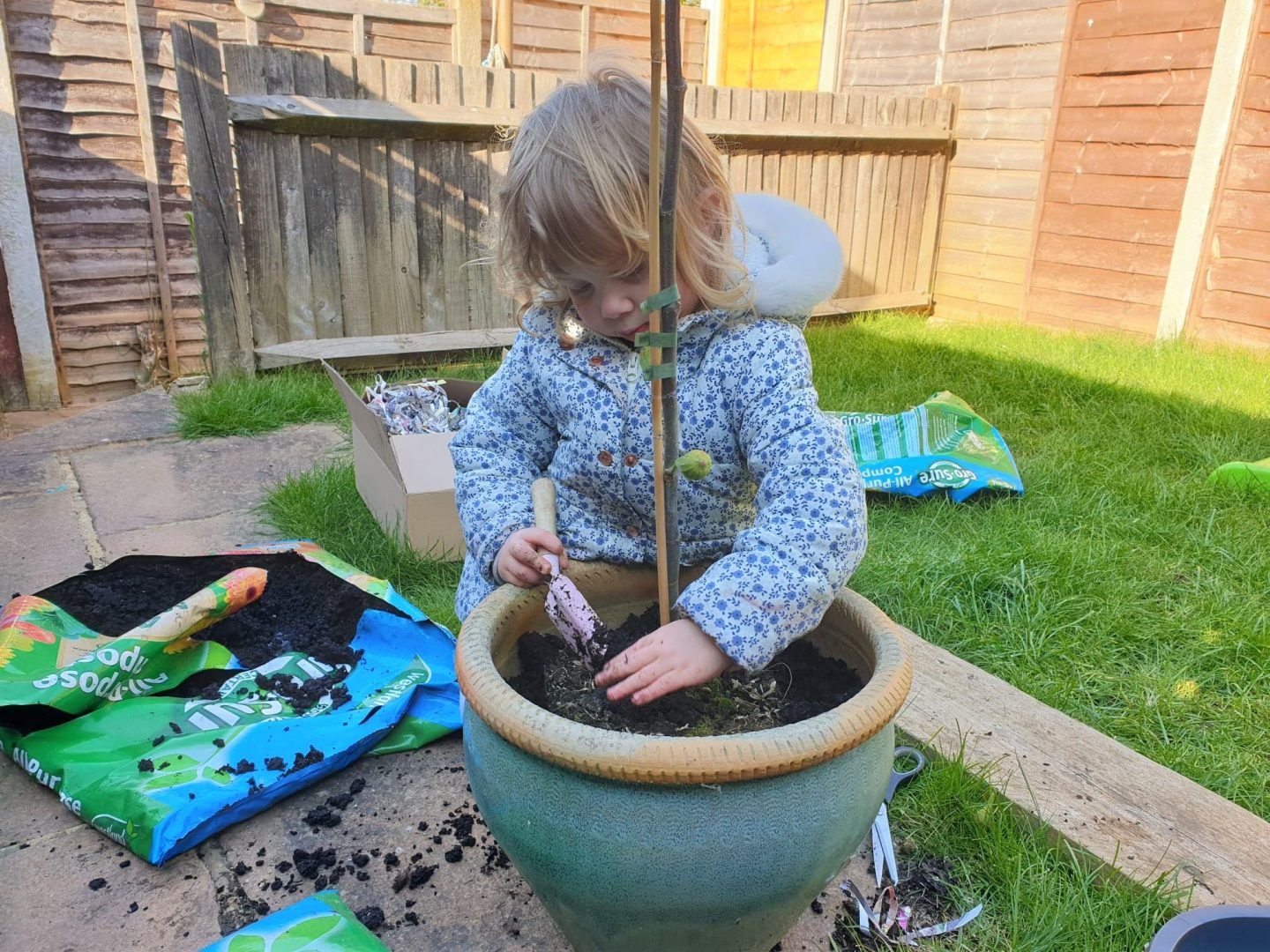 9.00 – Discussion about the weather, day and date. I showed her a picture of the Queen and asked her if she knew who it was. I don’t know whether she actually knew her face or if it’s because she was wearing a tiara, but she guessed correctly! We talked about it being her birthday and how we were going to do some activities to celebrate!

9.15 – I asked Autumn how many homes she thought the Queen has. She guessed 1. I told her she has a lot of houses and she counted upwards, pausing for validation, until I nodded at 6. I showed her pictures of each of the Queen’s residences and we discussed them. Autumn asked if we could visit Buckingham Palace again once the ‘naughty germ’ is gone – as well as all the others! Her favourite one that she’d like to live at was Windsor Castle, because of its towers. 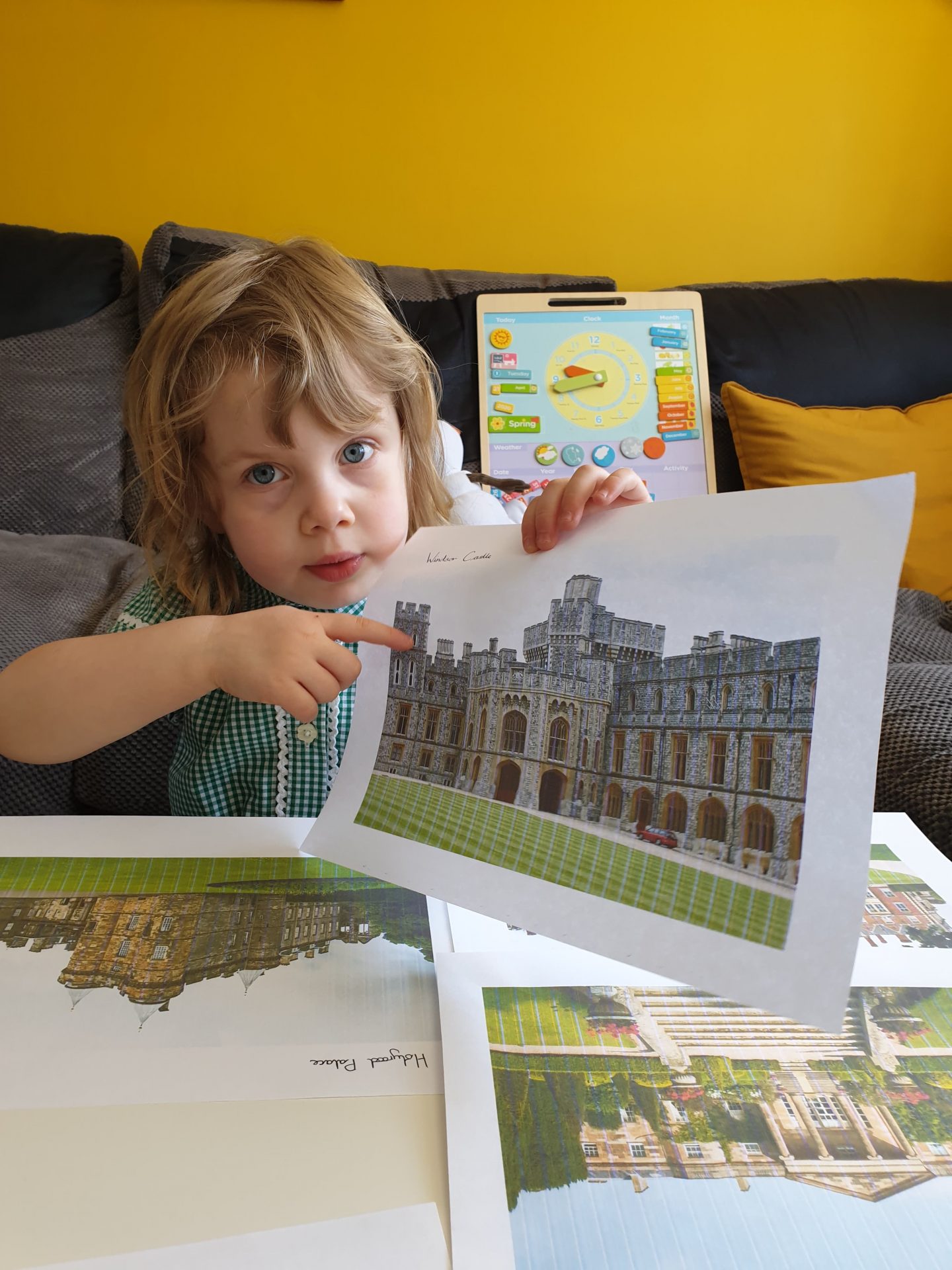 9.30 – We found some boxes and toilet roll tubes and Autumn junk modelled her own castle, complete with towers and turrets! 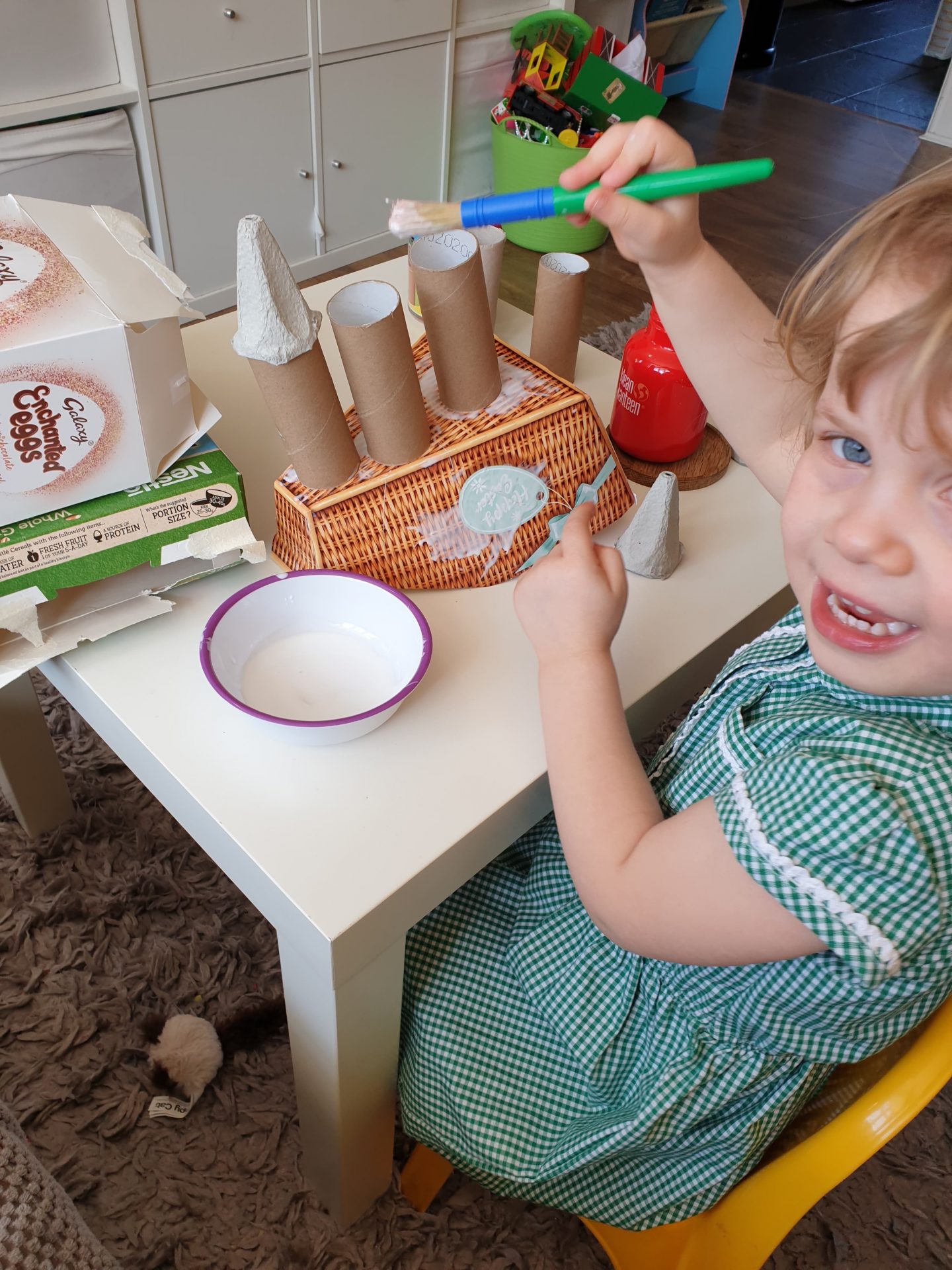 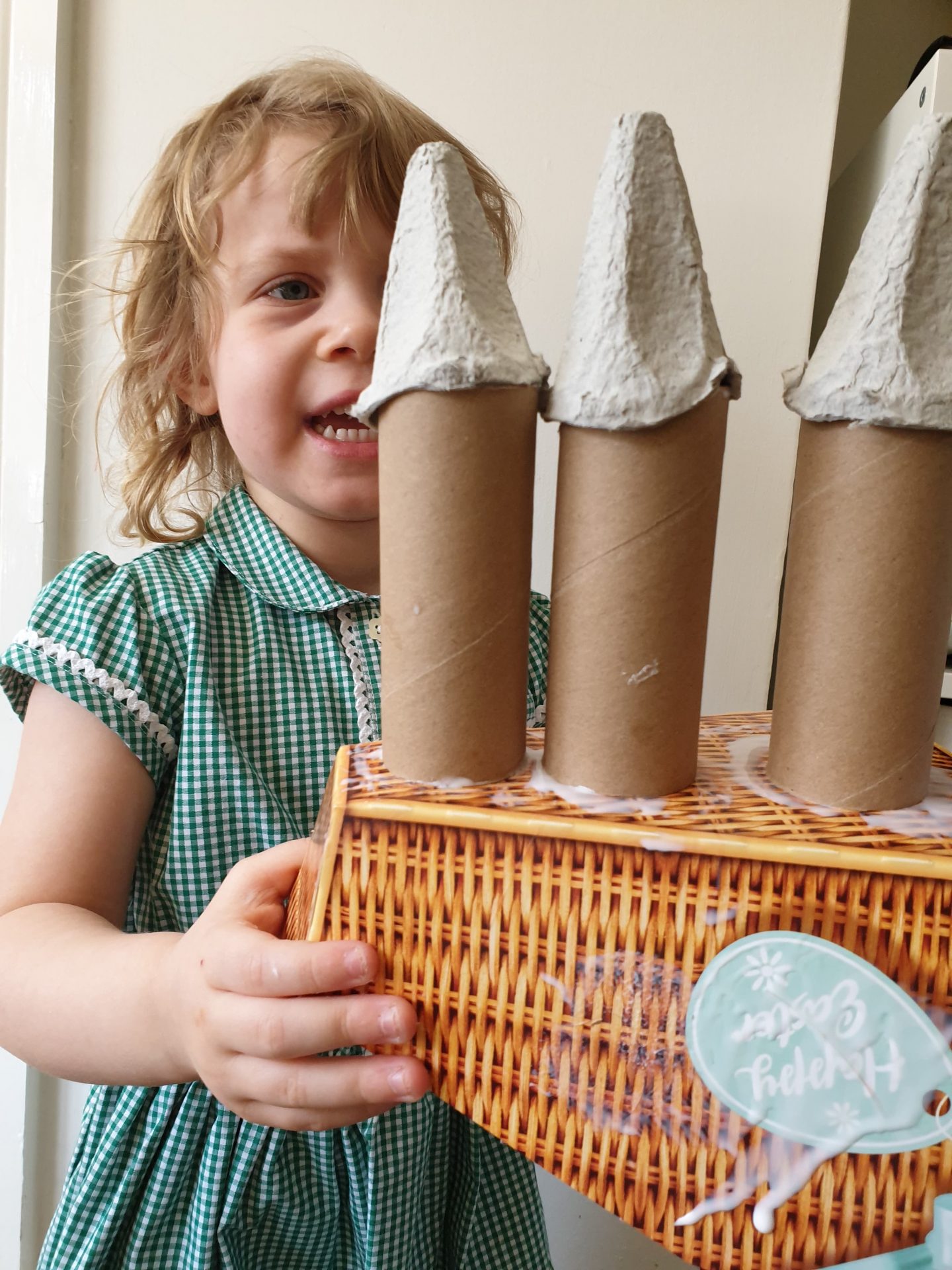 9.45 – No birthday is complete without cake, so we headed to the kitchen and made some fairy cakes! Autumn really enjoys baking and is getting really good at mixing the ingredients in a bowl.

10.45 – We discussed what kind of food the Queen might like to have at her birthday party. Autumn made an apple, biscuits, a doughnut with sprinkles, some pizza and a sausage out of Play Doh. 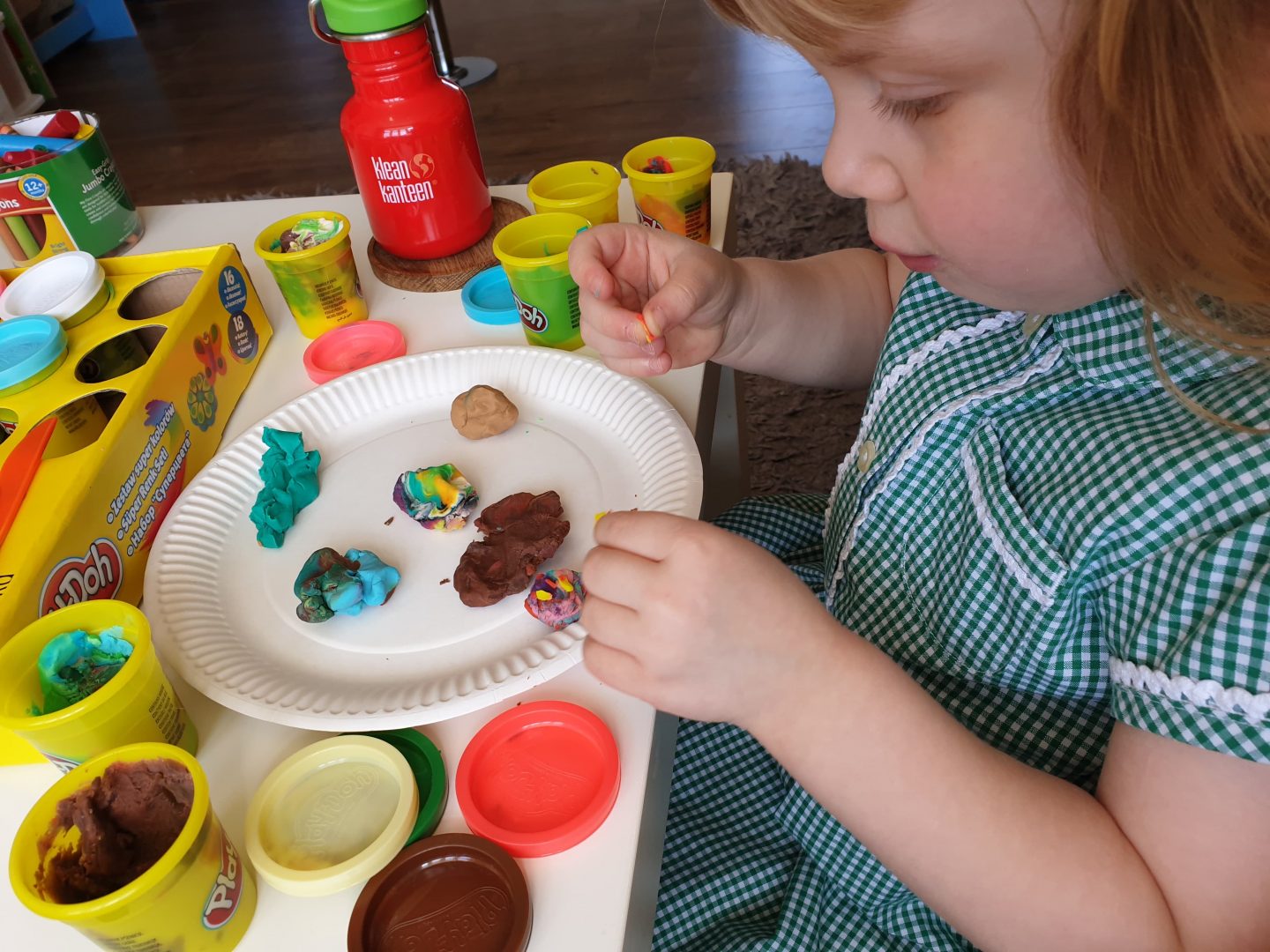 11.00 – We decorated the cakes with white and red icing. We were going to make them red, white and blue. However, the blue food colouring we had went out of date last month. It’s not like we can just nip to the shop for non-essential things right now.

Naturally, we had to taste test them before the icing had set. They were delicious!

9.30 – We went for a walk, taking a different route. Autumn spotted some blossom on trees and we noticed lots of rainbows in people’s windows!

10.45 – We talked about people in our society who help us. Autumn named quite a few! We then looked at some flashcards, naming more people who help us in different ways. The window cleaner arrived and started cleaning our windows just as we were discussing this. Autumn pointed him out as someone that helps us by keeping our windows clean. We took a pause so that she could go and wave at him!

11.00 – We looked at a powerpoint about the police, learning more about them. We also played a game, labelling the things that police officers have to wear. Autumn correctly told me that we can find police officers in the police station, in their cars or out and about helping people. She also coloured in a picture of a police woman. She insisted that she needed to be a rainbow police officer with pink hair like Mummy! You certainly wouldn’t miss this officer out on the beat. 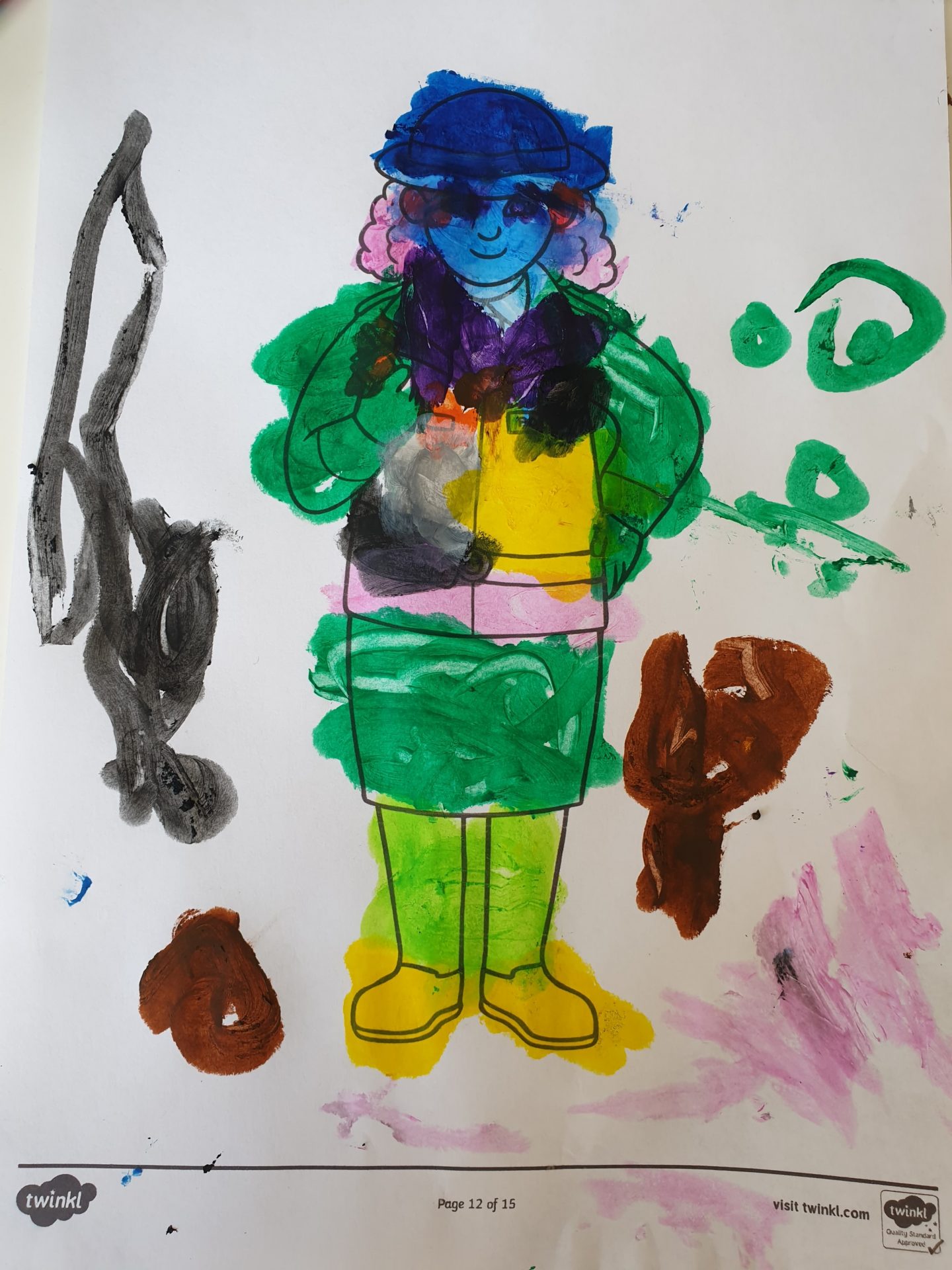 11.15 – We finished off the morning watching a couple of episodes of Numberblocks

9.30 – I told Autumn it was St. George’s Day and explained that countries each have a patron saint. We read the story of George and the Dragon, discussing things such as how we thought George felt at various points and how the dragon might smell.

9.30 – We headed to the garden to roleplay the story of George and the Dragon, attracting attention from a couple of neighbours who grinned over the fence! Autumn was George and gave me the role of the dragon and her Dad the role of the princess (good casting, Autumn!) We had lots of fun and had to reenact it several times! 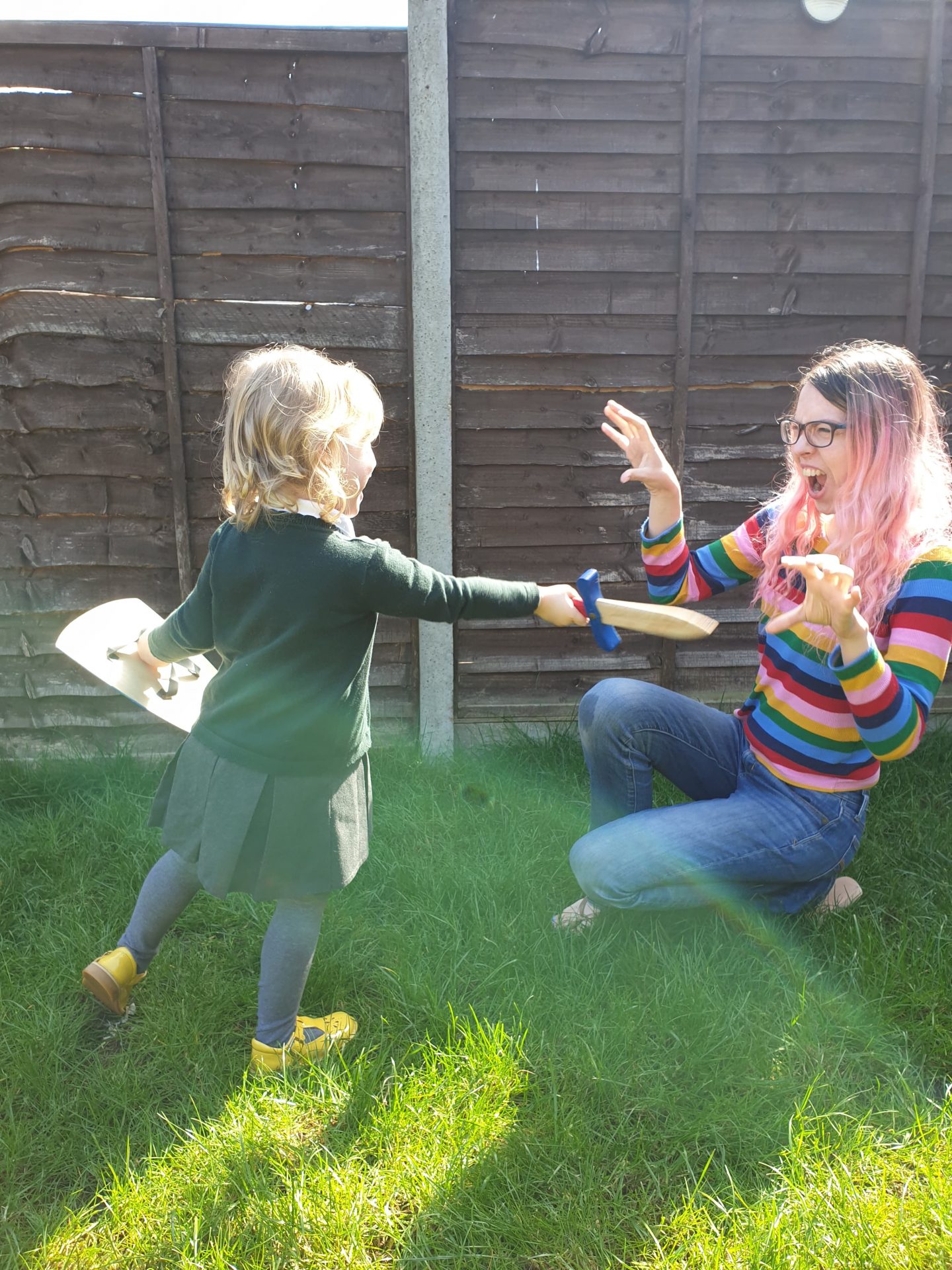 The princess was so happy to be rescued by George, that she gave him a big kiss! 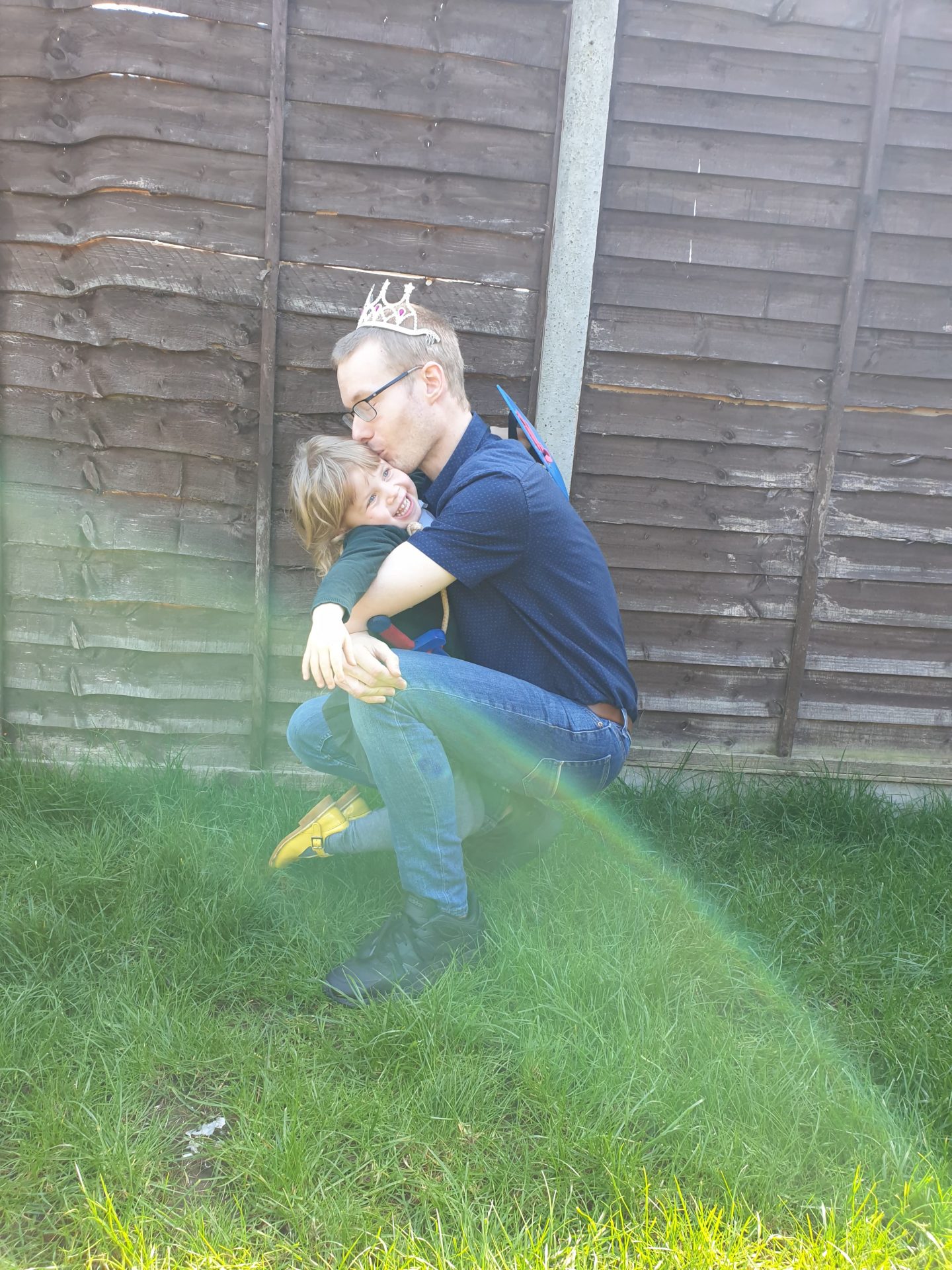 9.45 – Back indoors, Autumn coloured in a picture of a dragon. She decided it needed to be a rainbow dragon and named it Sophia. Apparently, its special power is ‘zoom power’. 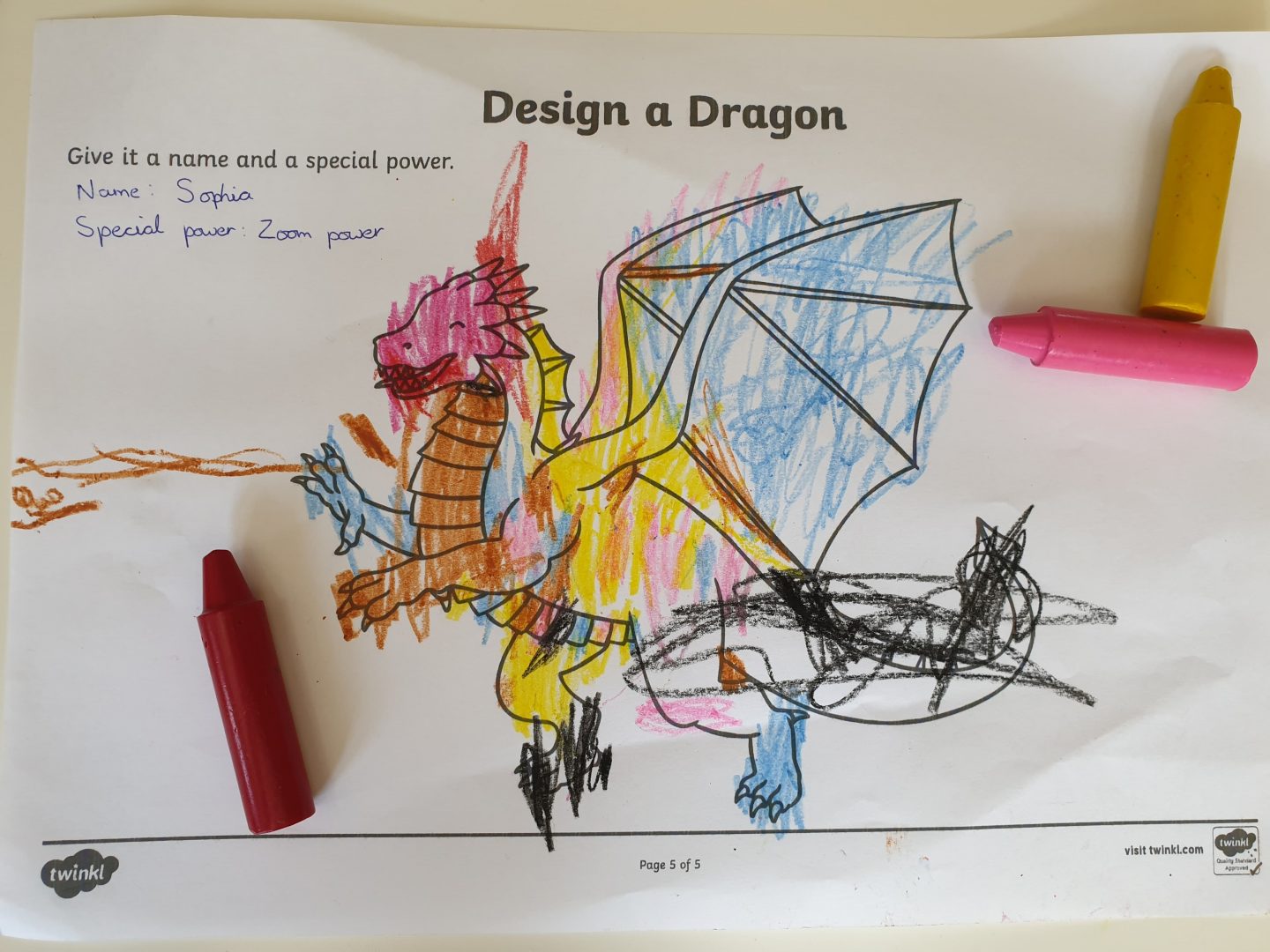 10.00 – Autumn loves board games, so I knew she’d love the St. George’s Day board game that I found! We really enjoyed playing it.

10.45 – Autumn had a go at a dragon themed pencil control worksheet and did a very good job!

11.00 – We did some dragon themed yoga with Cosmic Kids

I woke up with a migraine and Autumn was in an extremely non-compliant mood. Friday, unfortunately, was a write-off!

Disclosure: I realise a lot of the resources I’ve linked in this post are from Twinkl. I’m not working with them, I just really like their resources!

Incredible reasons why you should light your home with LED bulbs

A “Case” of Concerns: Making Moving Easier With Children

The Power and Safety Tradeoff in Used Cars