I know, I know. A round up post? We’re a good couple of weeks into 2020 now and nobody is saying “Happy New Year” anymore… Well, I only had this idea when I looked at my nails the other day and I thought it would still be a fun post! 🙂 I had cute nails for most of last year and experimented with them a lot more. Thanks to my new manicure routine, they also grew a lot longer than they’ve been for years!

My first nails of the year were in late February when I had a job interview on the horizon. (I got the job, yay!) I didn’t want my nails to stand out, so I went for a cute pinky peach colour. Unfortunately, I don’t have any photos of them when they were first done (I didn’t have plans to write a blog post at the time!) However, I did find one of them growing out after one of Autumn’s sticker attacks:

At Easter, I decided to go for something a bit different! I changed up my shape to squoval and had Mini Egg inspired nails! Mini Eggs are my favourite Easter treat and I loved having such cute nails that reflected that.

Yesterday I decided to go with my favourite Easter treat as nail inspo! Yep, I got Mini Eggs nails! 😍😂 I'm loving the spring-like weather today, too. I've actually just written a blog post about bringing your winter wardrobe through to the spring, which will be really useful as it gets warmer this week🌷🌷🌷 Check it out, link to blog in bio! ❤⤴️ #EasterNails #NailsNailsNails

As we progressed into May, I changed my nail shape again to and got green nails! I loved this shade so much; it was perfect for spring. Along with the delicate glittery white, looking back they actually remind me of snowdrops! I think I might actually go for this exact combination again soon. 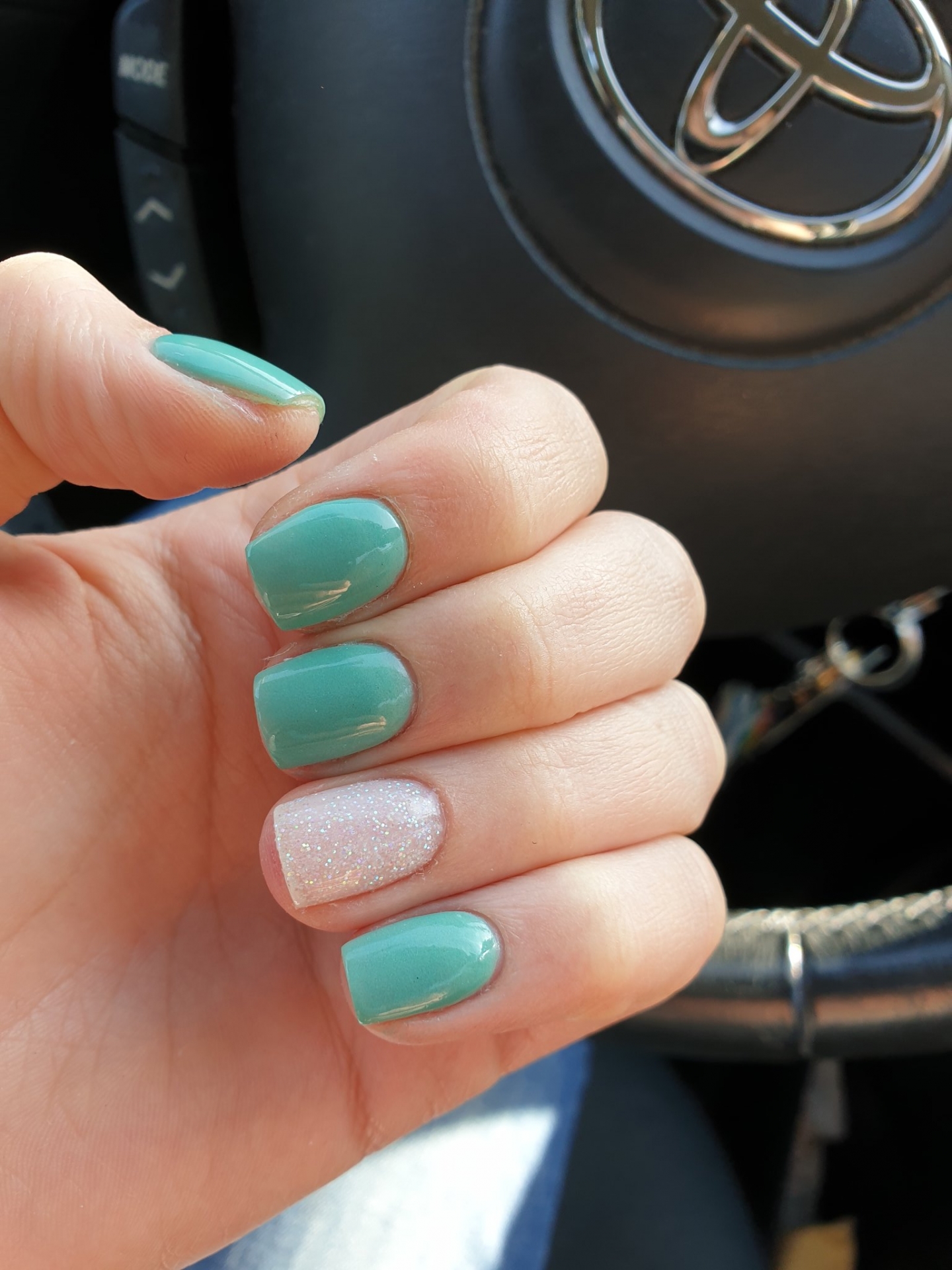 In May, I had the privilege of being Matron of Honour at a friend’s wedding. The colour scheme was royal blue, so understated nails were necessary. As such, I went for a gorgeous pale pink for all of my nails. 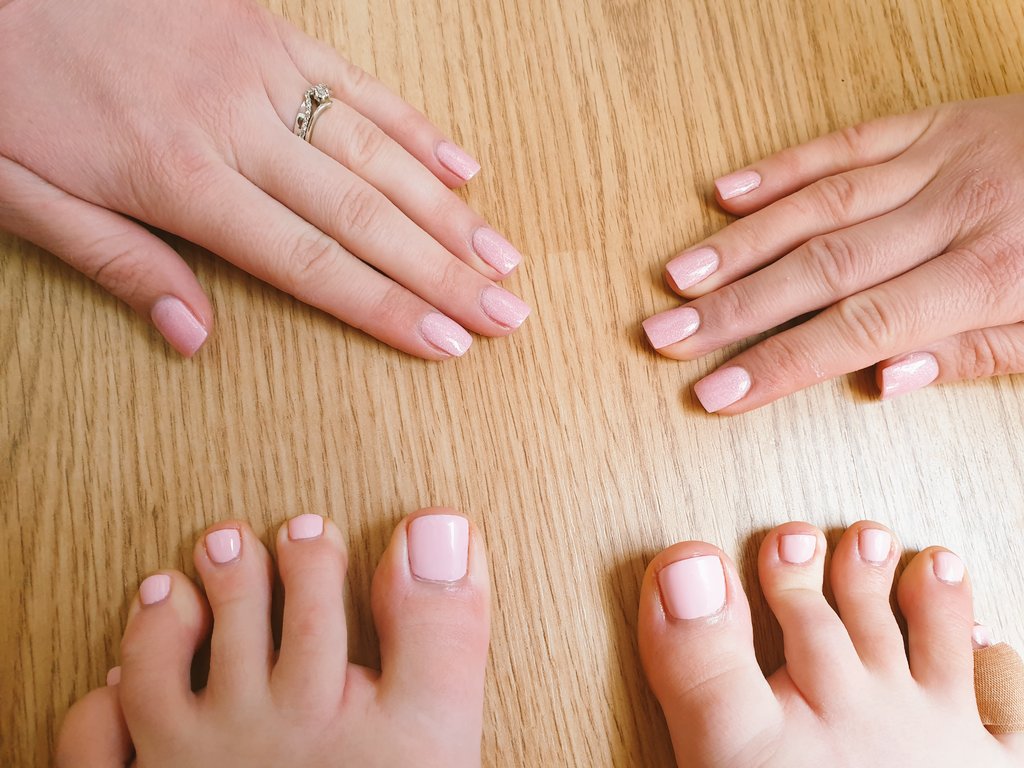 Here’s me on the big day:

…And just like that, my Matron of Honour duties are done! You know it's been an amazing day when your face hurts from so much smiling 😄 Congratulations to the beautiful bride and groom 💒👰💕 On a side note, I didn't really get any decent pictures with Autumn (who was a flower girl) as she was more interested in watching the ants on the path (see pic 3 😂) This is a real problem in our lives currently it takes ages to get anywhere as she's fascinated by them 😂 Unfortunately, part way through the day she became unwell, although we initially thought she was just tired. She didn't want any dinner before she went to bed, just wanted cuddles and was hot to the touch with a temperature. I hope things don't get any worse and she feels better in the morning 😣 I'm glad she got to walk down the aisle and do her bit beforehand though ❤ #matronofhonour #wedding

As July arrived, I went for bright and beautiful fuschia nails! These weren’t my favourite, although I really liked the colour of them (which was a lot more purple irl). Something about them just didn’t feel like ‘me’. 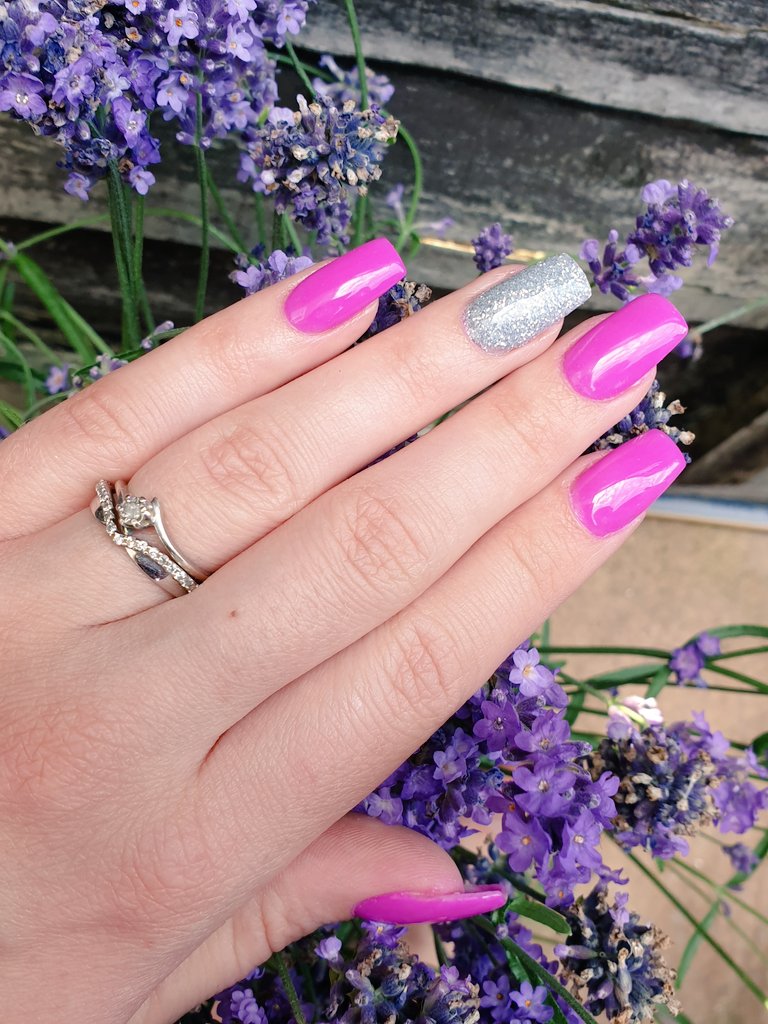 With summer fully underway, I went for more bright nails. By now I’d changed to a coffin shape and they had grown much longer. Inspired by one of the girls on Love Island, I chose this colour! It was just the perfect colour for summer and I loved these nails so much. I didn’t want them to grow out.

As autumn arrived, I knew I’d have to have a pretty special colour after loving my previous nails so much. Luckily, I spotted the perfect shade for the new season. My nails had also reached new lengths in their coffin shape! I got so many compliments on this beautiful colour. 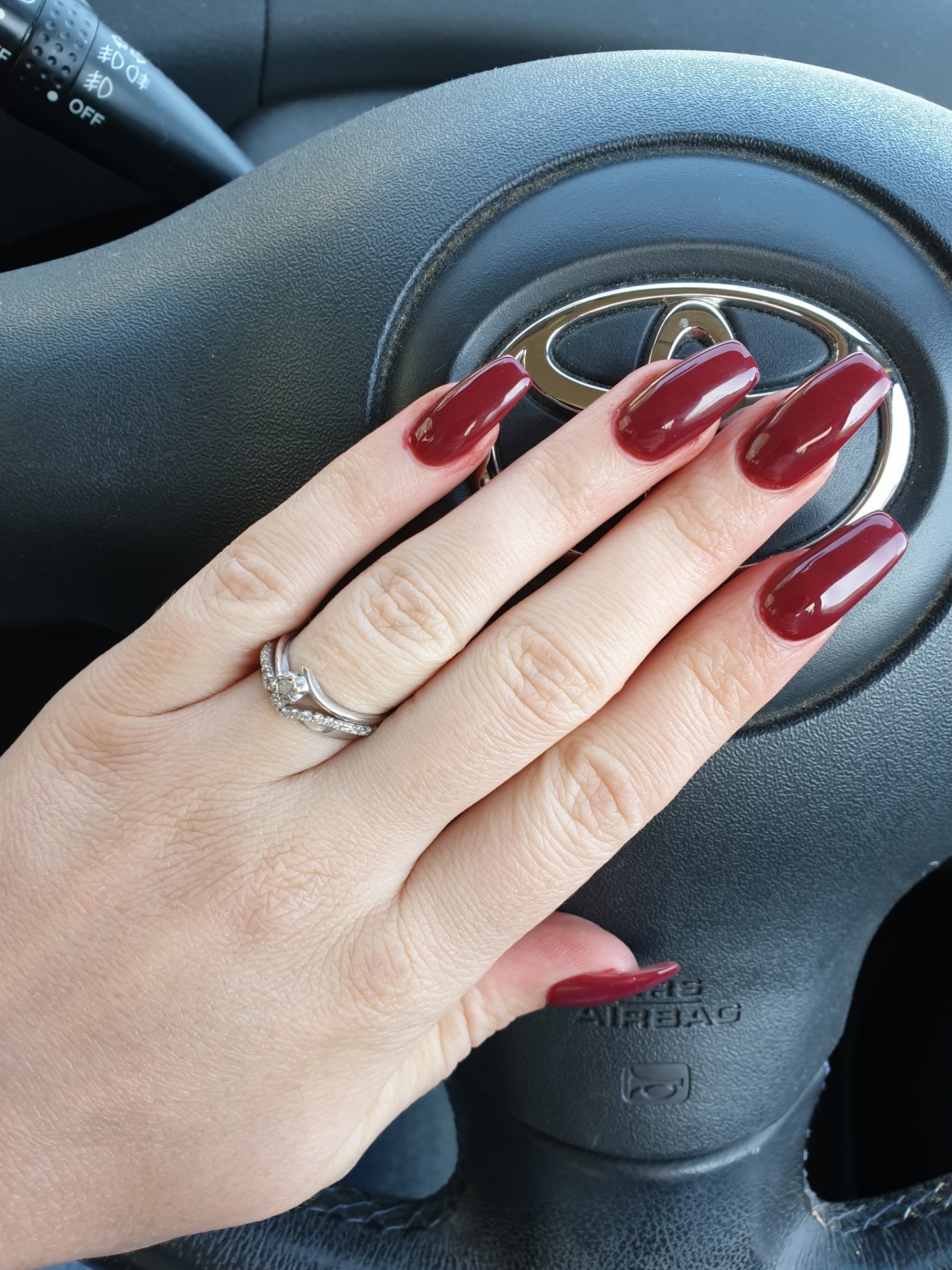 These were my least favourite nails of the year. I chose a shimmery dark purple for Halloween. However, the pot had the wrong number on it. After I said that I was sure it was the wrong colour, the technician insisted that it was right and just looked different in the pot. Well, I’d never had one look THAT different before but I went along with it. It was only after a couple of layers that he realised. He found the purple and layered in on top, saying it should be fine. Well, it was not. I was left with a weird dark colour that looked brown and purple in different places under bright light.

The only reason I didn’t complain and ask him to re-do it all was because I’d already been in there for TWO HOURS and Autumn was starting to act up. 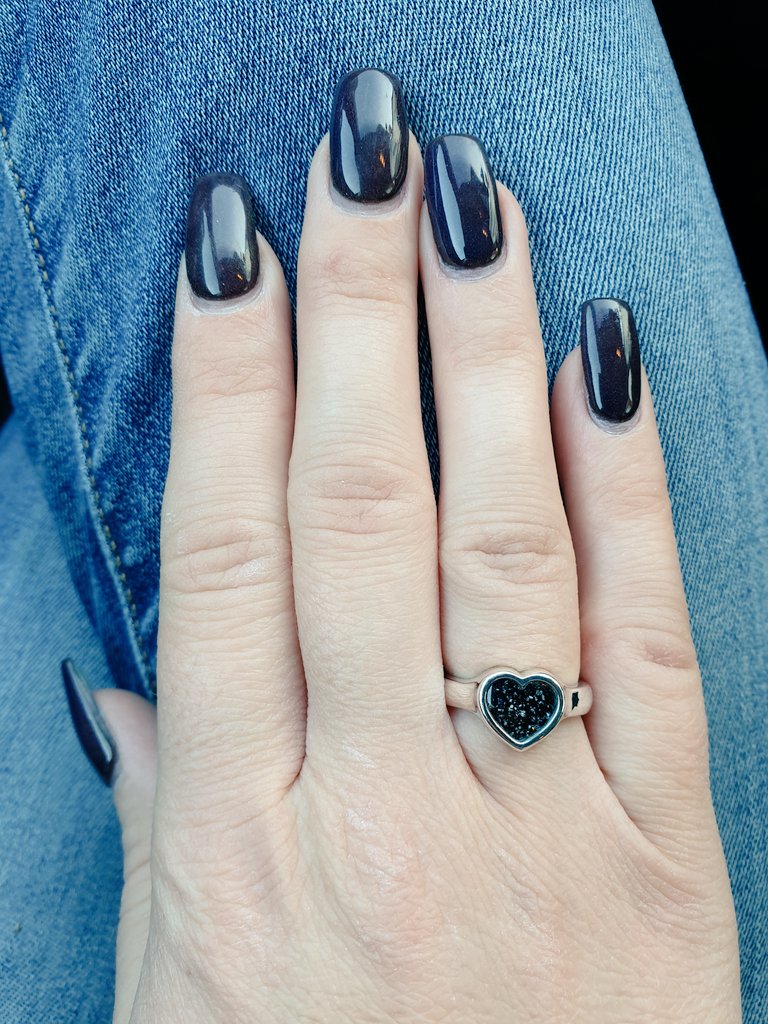 With Christmas around the corner, I fancied a bit of sparkle. I’m annoyed I didn’t take any pictures of these as they were really pretty! I only have a blurry picture of me holding my kitten’s paw…oh and a picture of a pregnancy test. These were the nails I had during the start of my pregnancy and my subsequent miscarriage. Pretty apt as I was feeling blue, really. 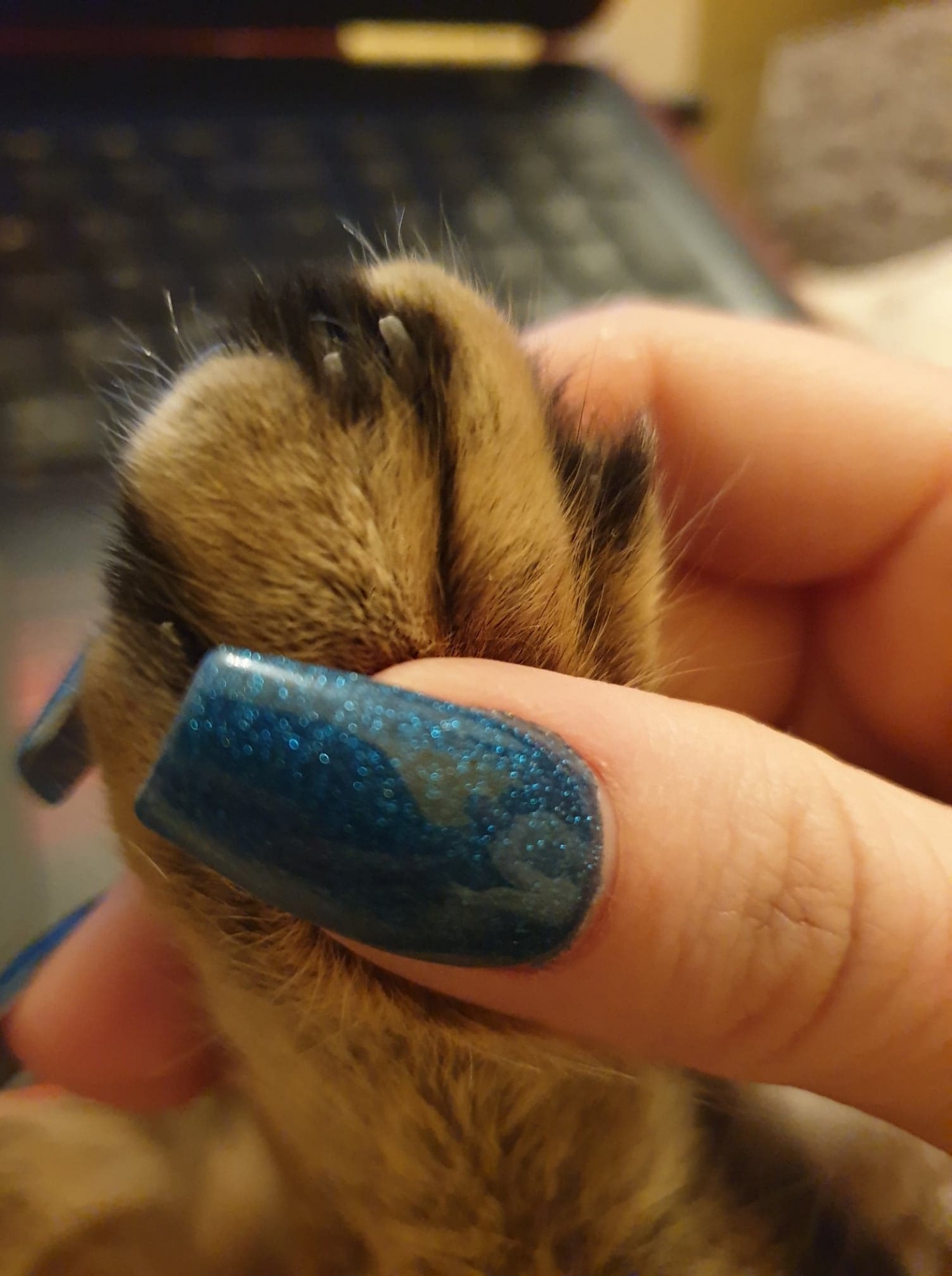 Along with my summery red nails, these are my joint second most favourite nails of the year. I didn’t set out to go for this pink glitter, but it just caught my eye. It was so dreamy with the little snowflakes on for Christmas. 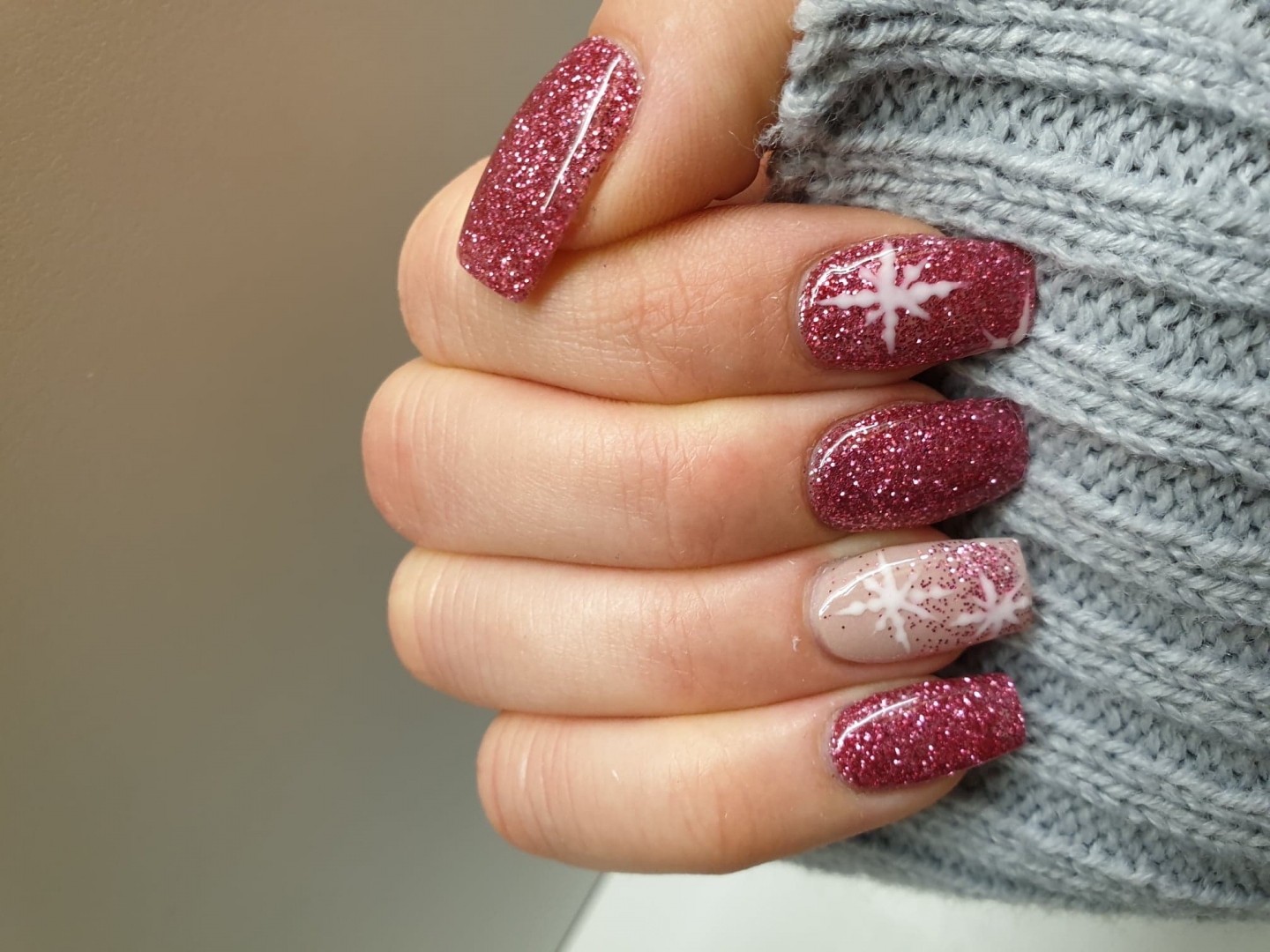 I usually just have grown out Christmas nails for my birthday on New Year’s Day. However, I decided that this year I wanted birthday nails. After all, I would if I was born at any other time of the year! I went for blue with holographic stars and a holographic feature nail on my ring fingers. They were super cute, but unfortunately the stars didn’t last long. Boo 🙁 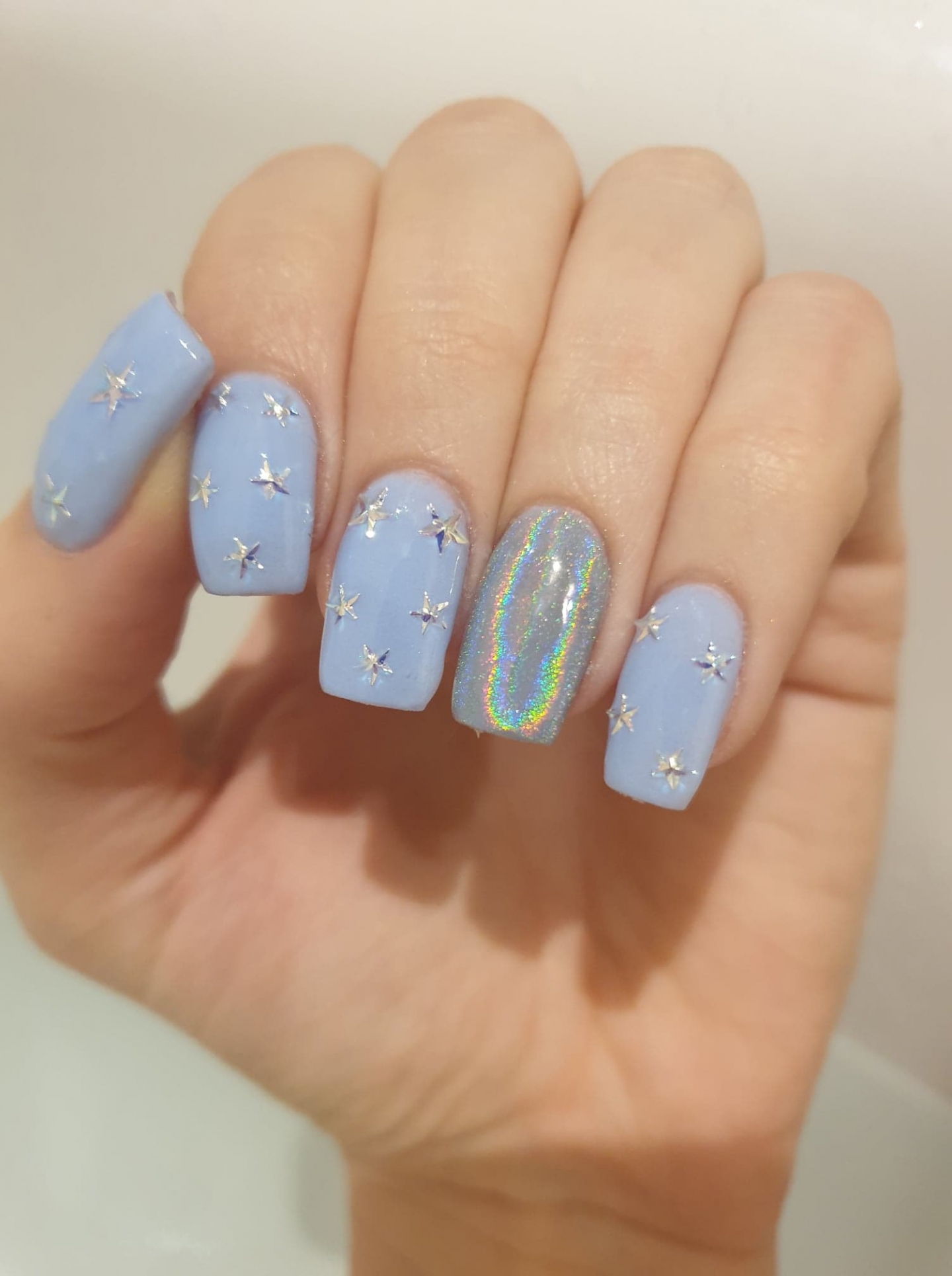 Which nails were your favourite? I’d love to hear! 🙂

A Quick Guide To Healthy Skin

Different Jewellery to Suit Every Personality