Alice in a Christmas Wonderland at Hever Castle

Gifted¦ Whilst Hever Castle is wonderful in any season, I think Christmas has got to be my favourite time to visit. The castle and its grounds become extra magical, so much so that even adults are left with wonder. Rather fittingly then, this year’s theme was Alice in a Christmas Wonderland.

Upon our arrival on Friday evening, we could see lights in the distance and were raring to go. We followed the path to the castle, admiring the lit topiaries and reflections in the water as we went. 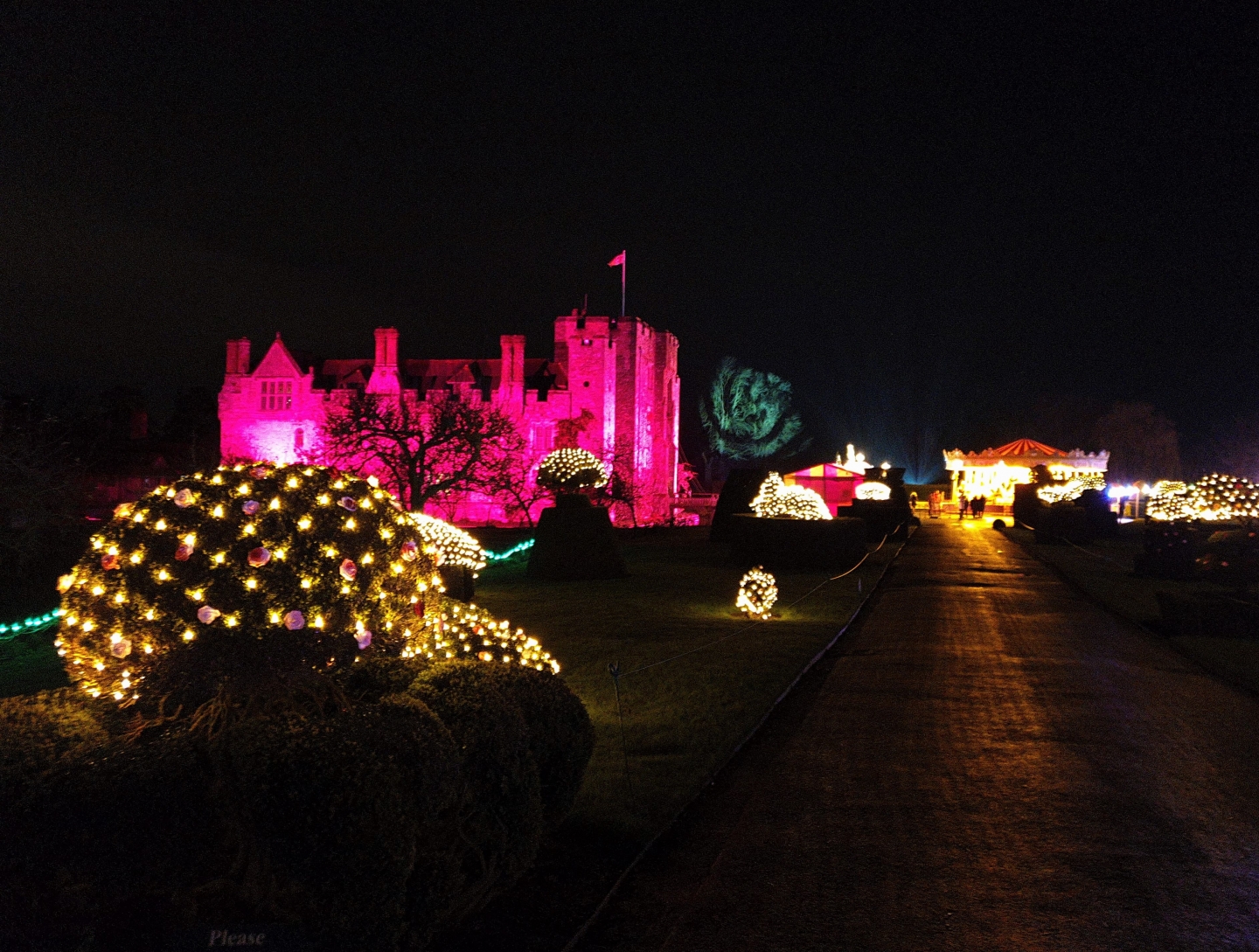 We were greeted with the festive smell of mulled wine and mince pies as we entered the castle. Autumn and I headed to the dining room and started to explore while my husband waited in the queue. It was beautifully set out for Christmas; you could easily imagine the chatter and laughter around the table during Christmas dinner. 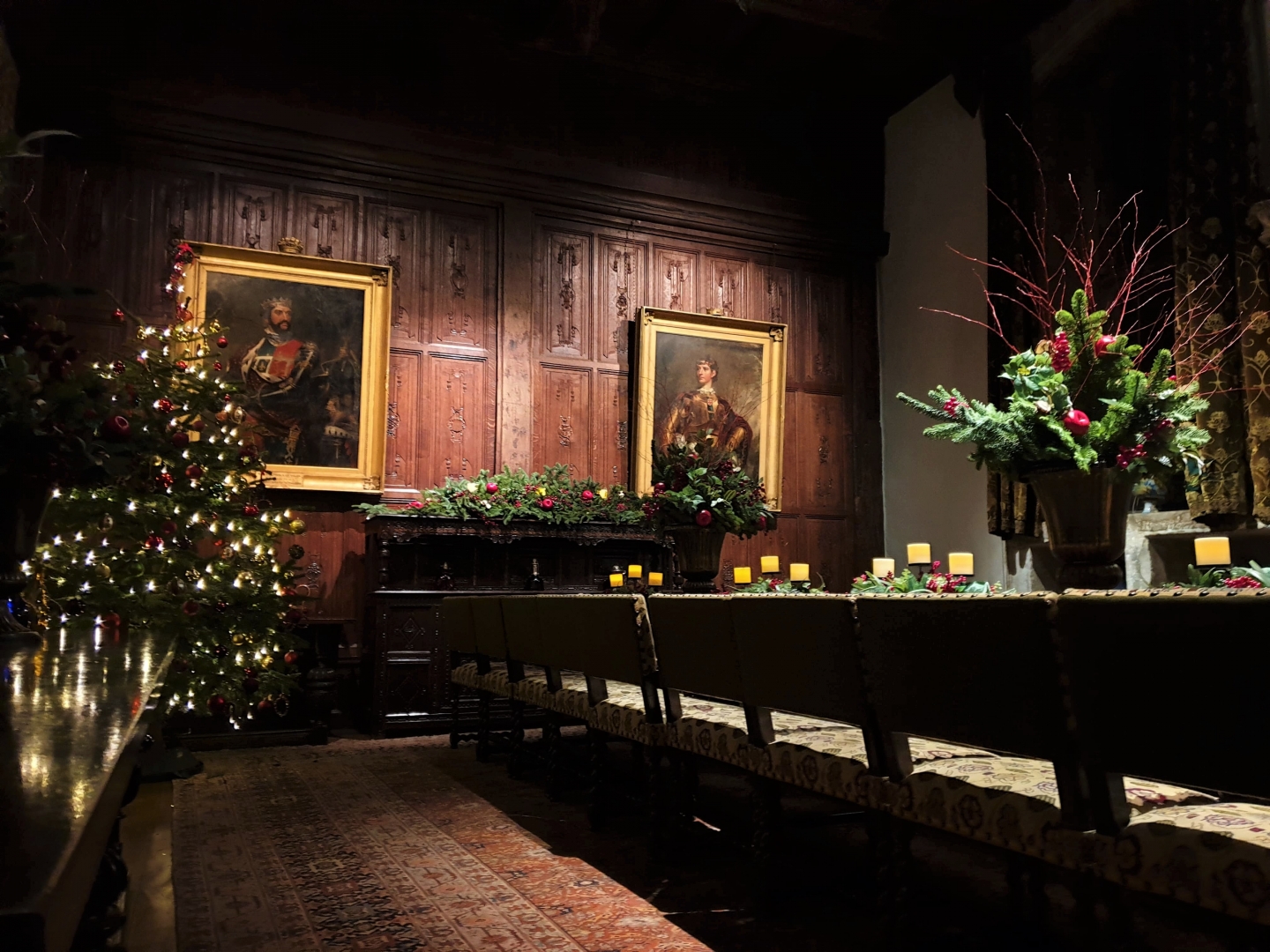 As we moved from each amazing room to the next, every single room had been decorated festively. There were even two nutcrackers stood at the end of the bed in Henry VIII’s room. 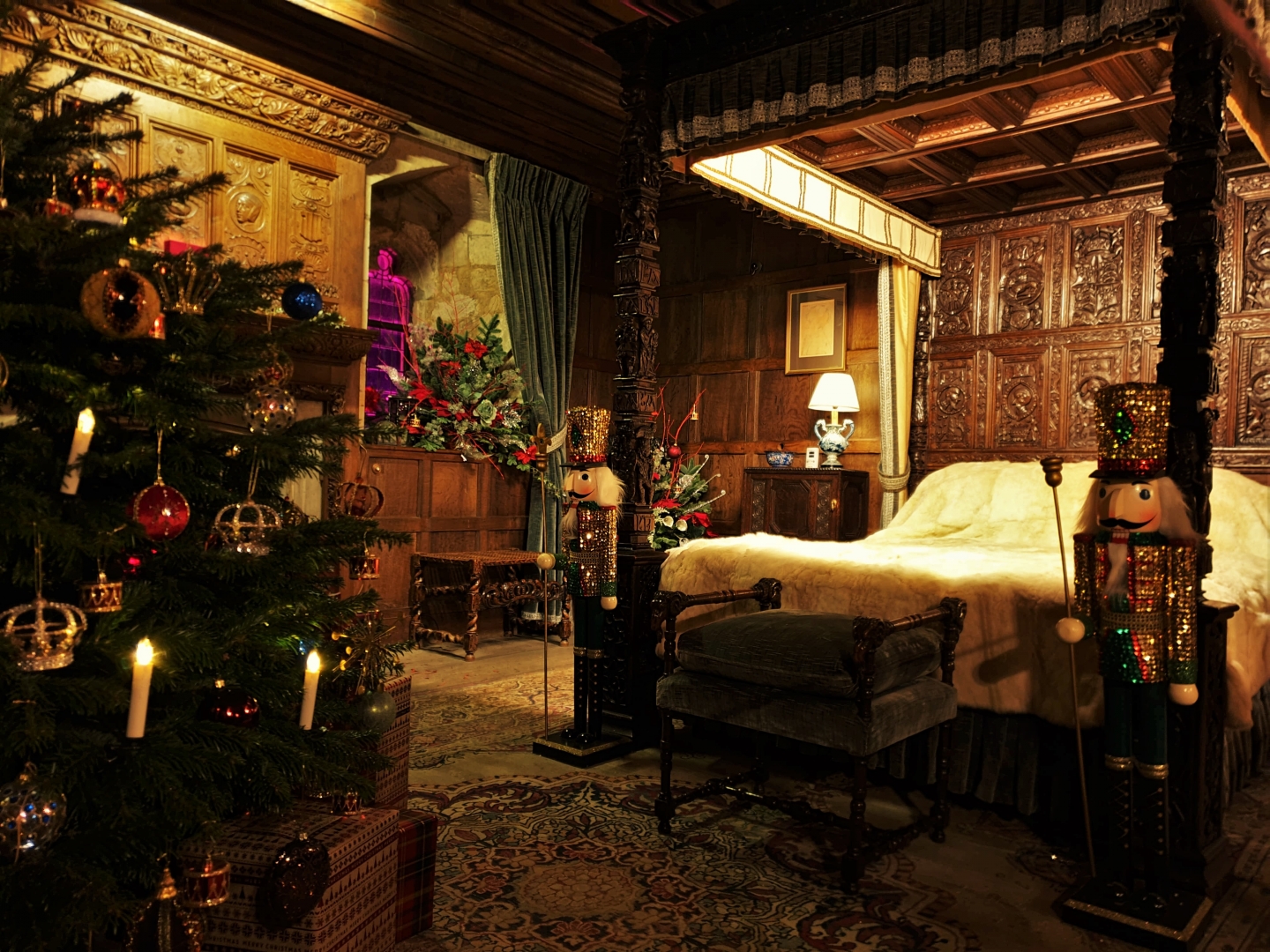 Each Christmas tree had been adorned with decorations relating to this year’s Alice in a Christmas Wonderland theme. From white rabbits and clocks, to playing cards, to miniature Alices, each one looked wonderful. 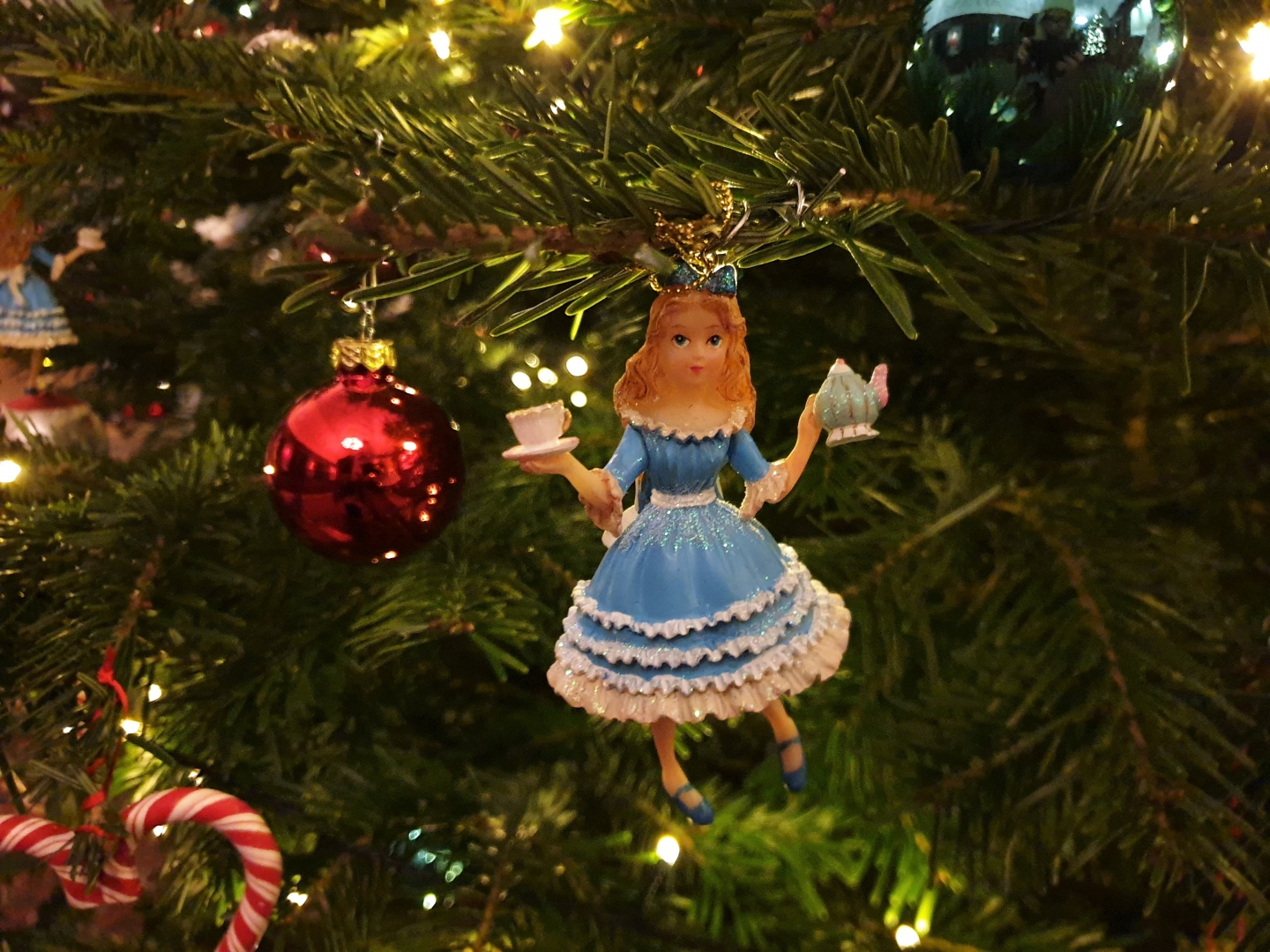 After a quick half an hour exploration of the castle, it was time for us to go to meet somebody that Autumn was very excited about. Passing the carousel and hall of mirrors outside the castle, she couldn’t stop talking about Father Christmas!

After walking along a path lined with Christmas trees and candy canes, we found Santa’s grotto. I tried to take a photo, but Autumn was in far too much of a hurry to see him! After being greeted by Mrs Christmas, we sat down to write a letter. Autumn asked for some Peppa Pig and Baby Shark toys that she saw in a garden centre with me the other day, as well as the Paw Patrol jet. 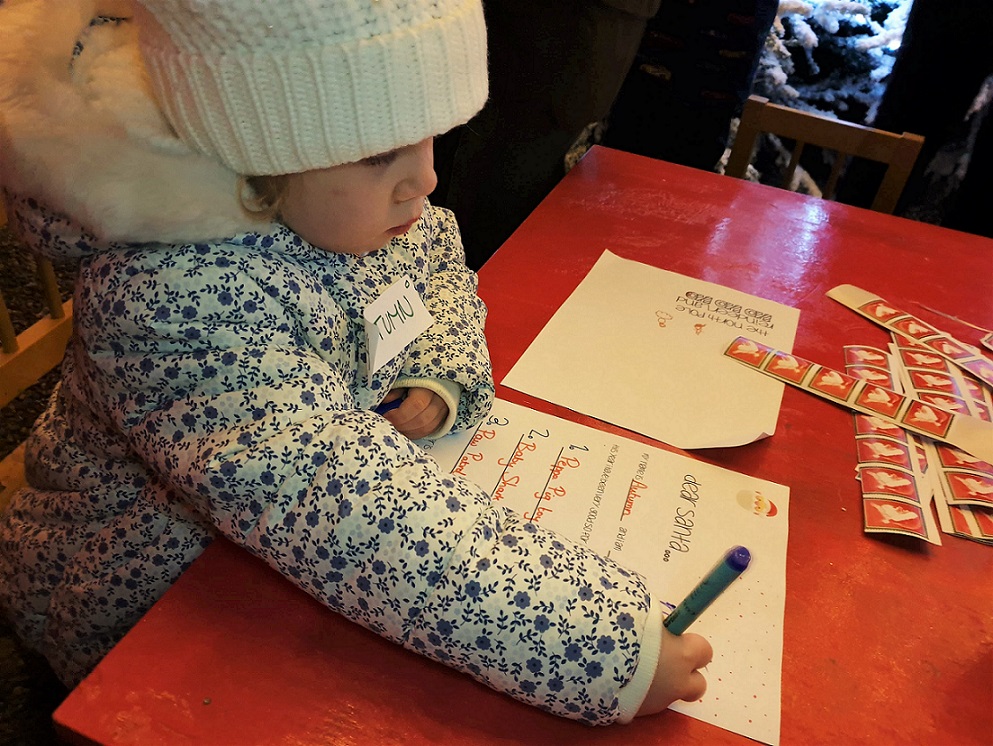 After she had carefully decorated it with pens and crayons, she hurried to post it in the post box. 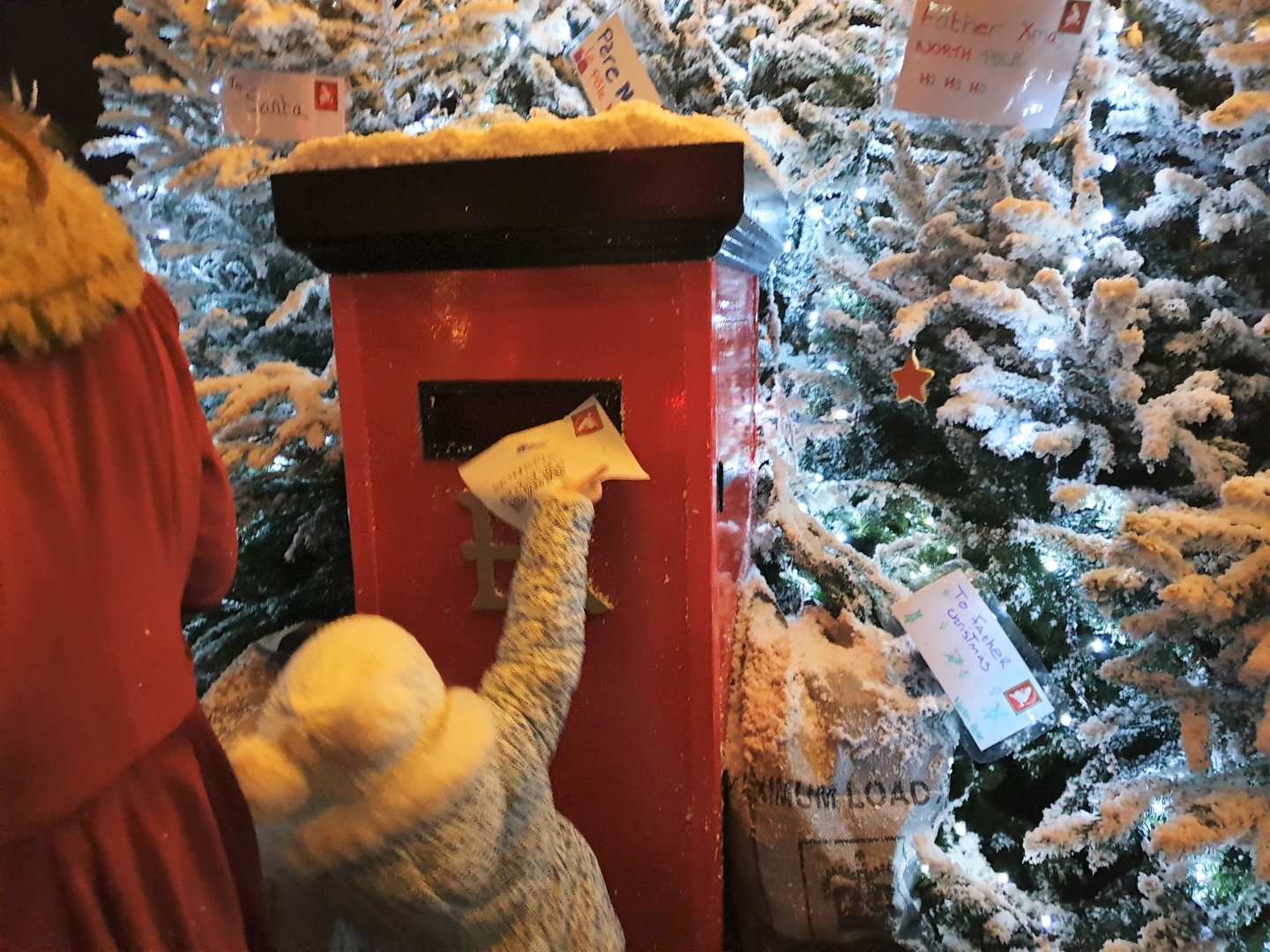 Soon afterwards, we were called by a friendly elf. He led us through the magical snowy trees, spotting reindeer, rabbits and other wildlife along the way. 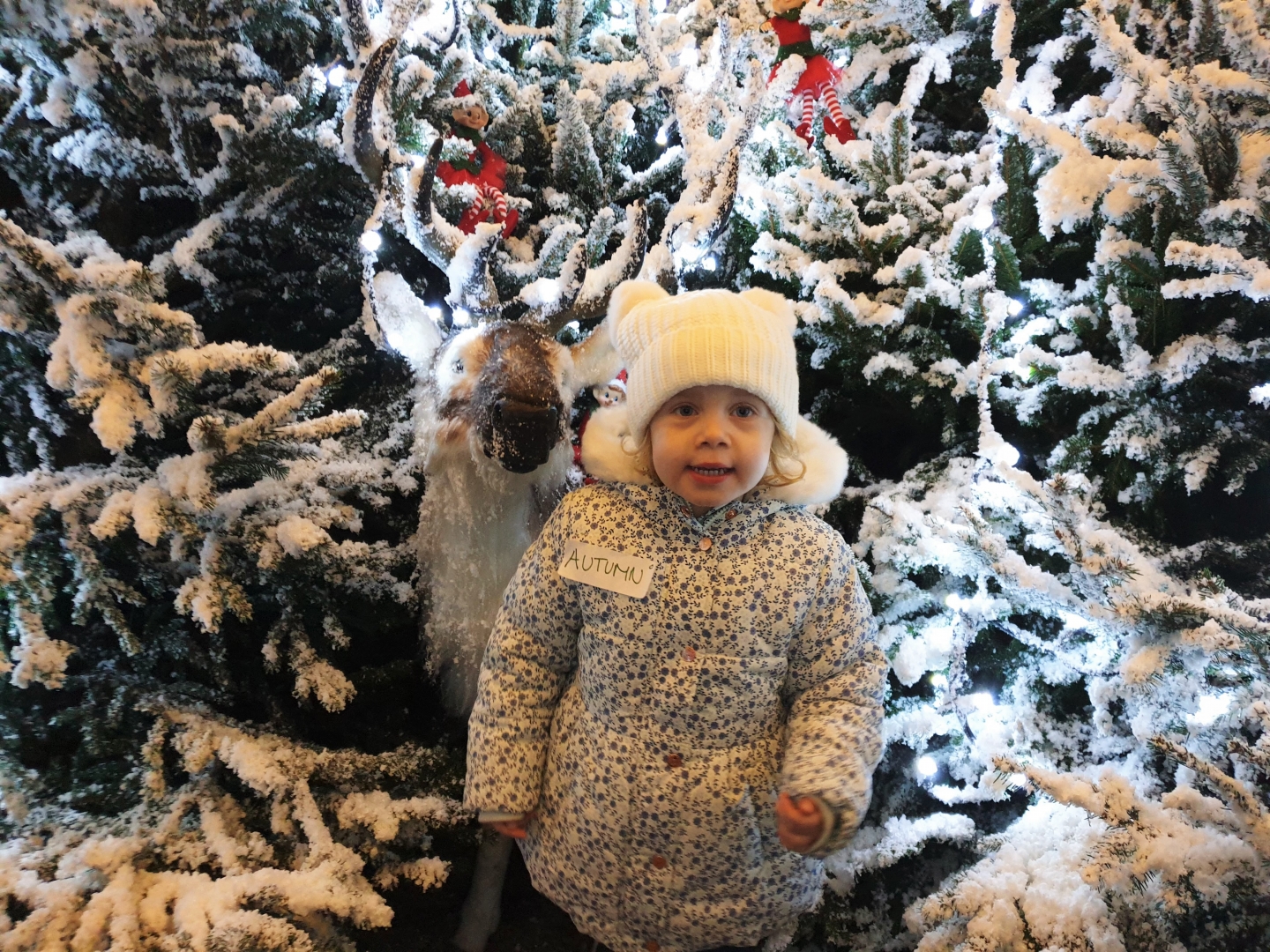 Around the final corner was Father Christmas’ cosy little hut. Autumn was a little star struck, but quite happily spoke to Santa. He gave her a lovely little Wilberry fox as a gift for coming to see him. 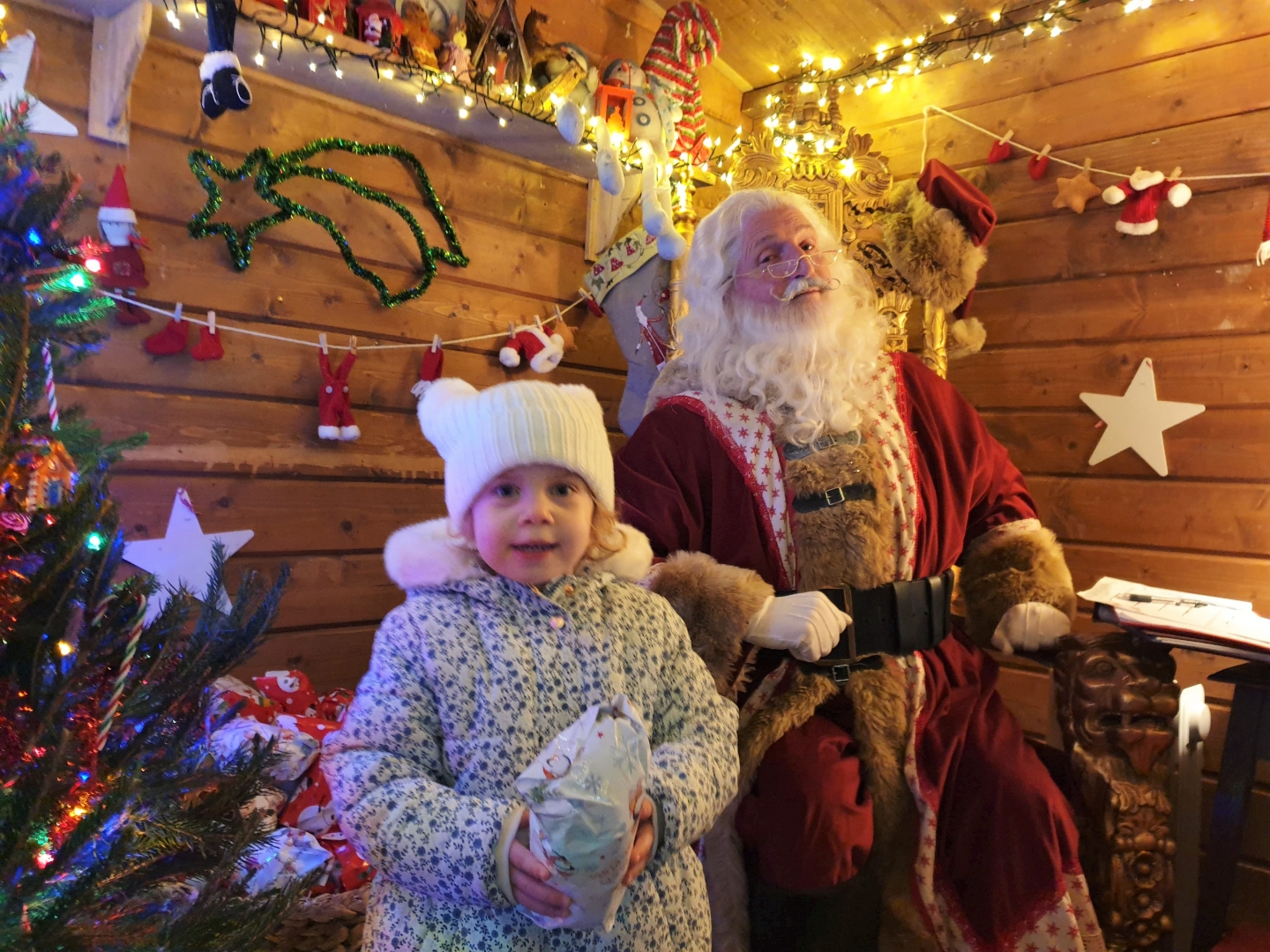 As we were leaving the grotto, there was a colourful frame, perfect for those post-Santa family photo ops! 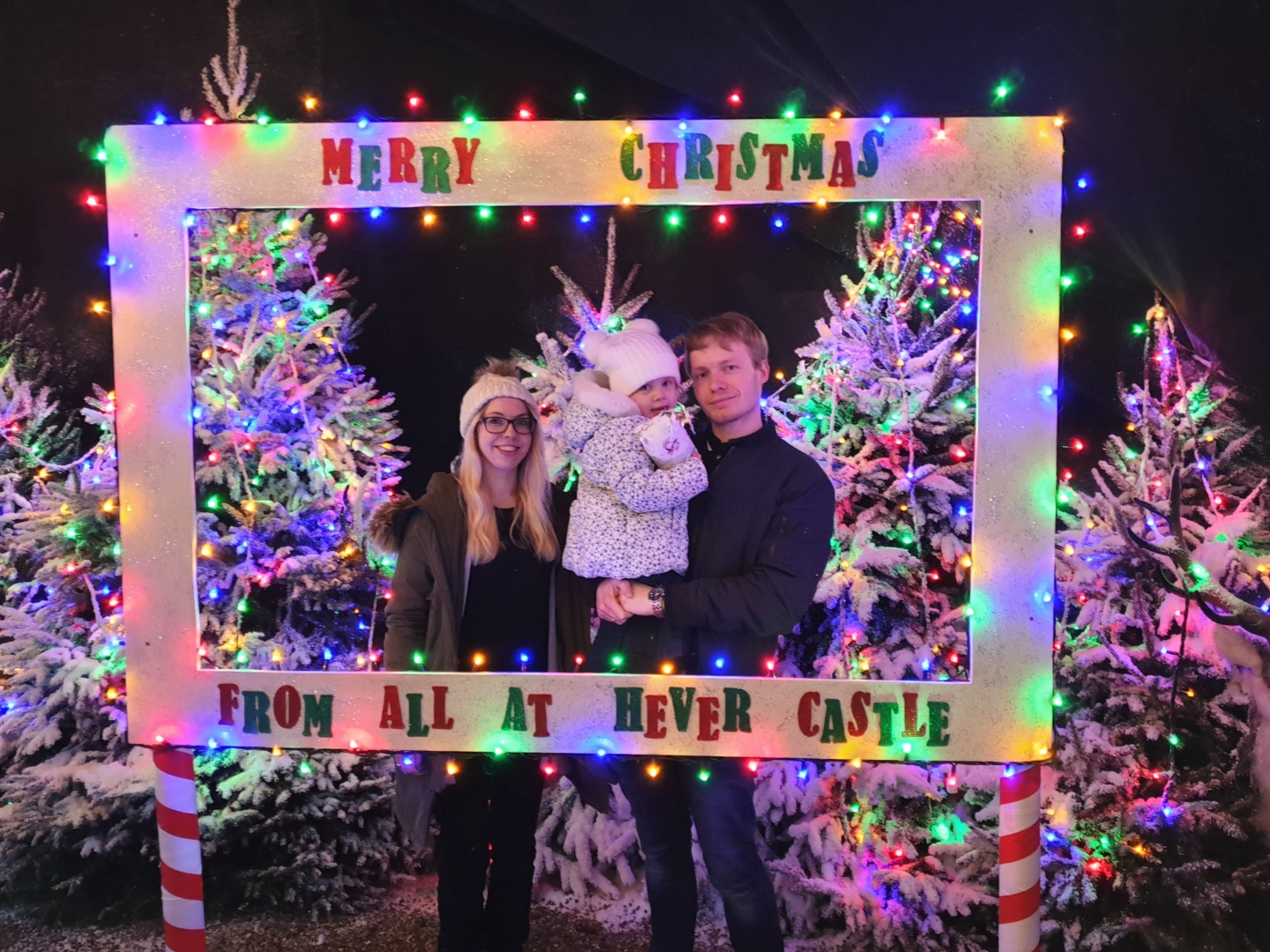 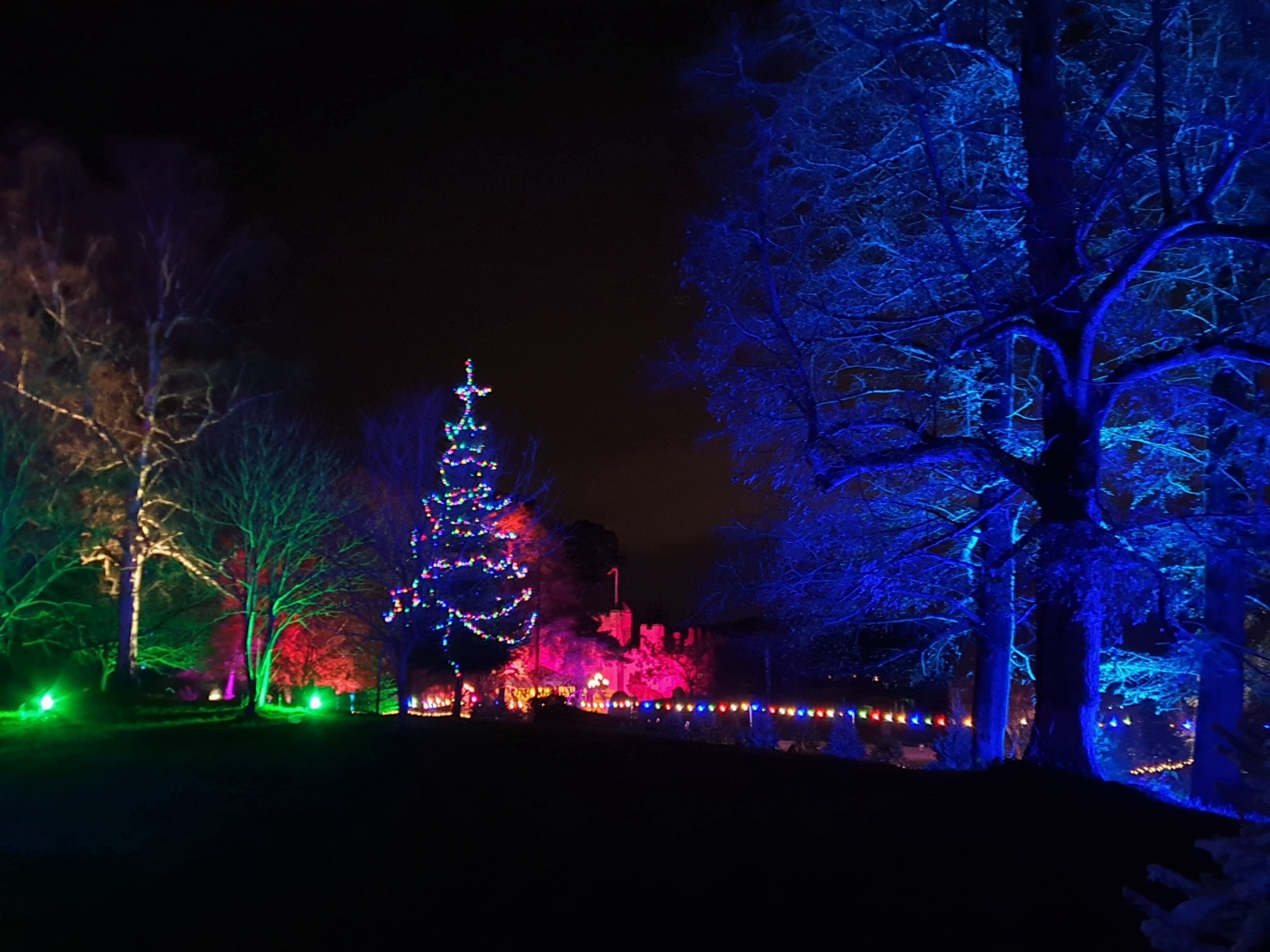 We even spotted the Cheshire cat widely grinning at us from a tree! 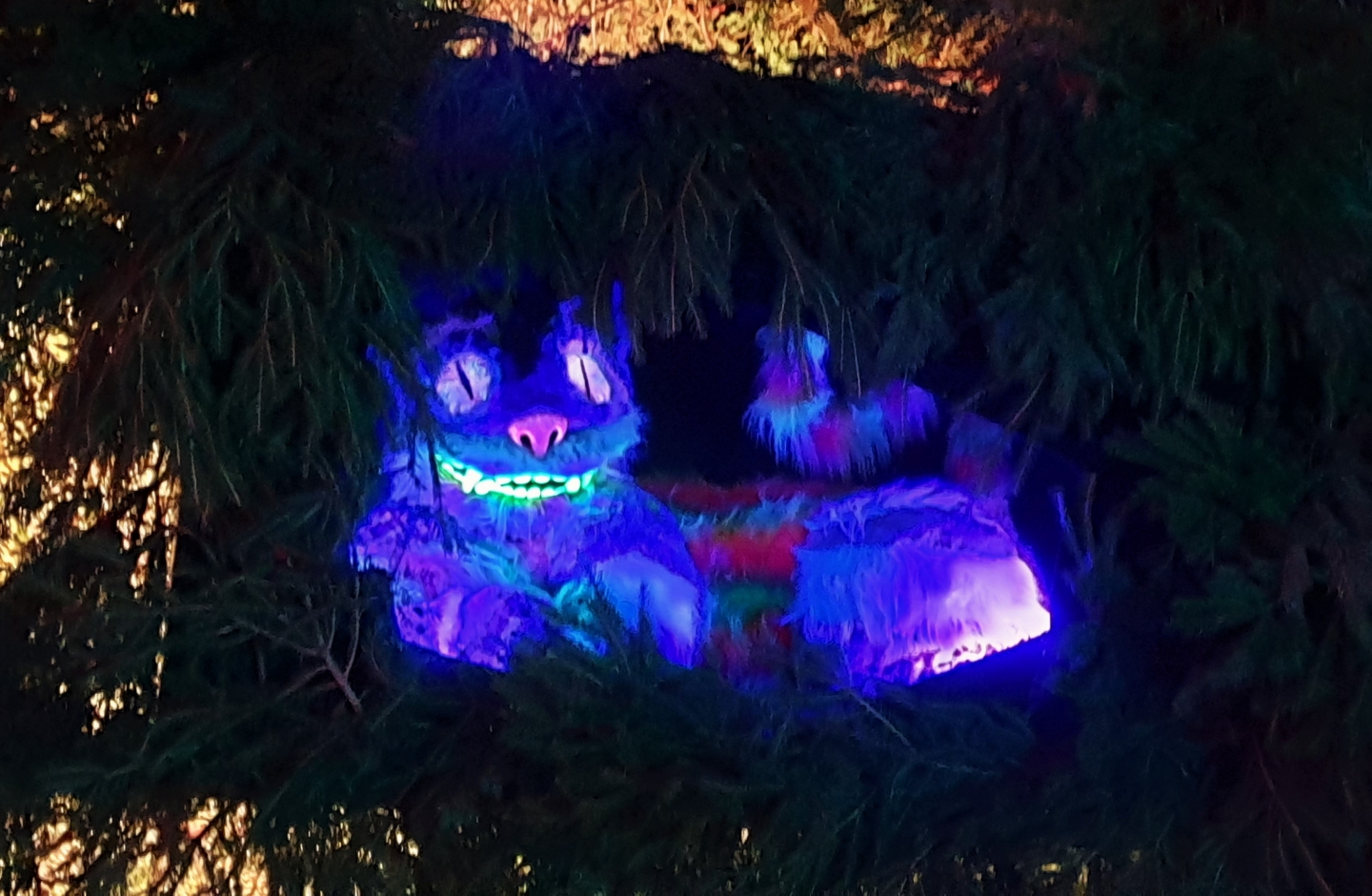 My personal favourite was The Mad Hatter. Autumn was invited to sit down at his tea party, where he wished her a happy unbirthday and asked for her opinion on what was the best hat for the Queen. Rather than opting for the obvious choice of the crown, she pointed at her own!

Before long, we came across the brilliant King and Queen of Hearts themselves! 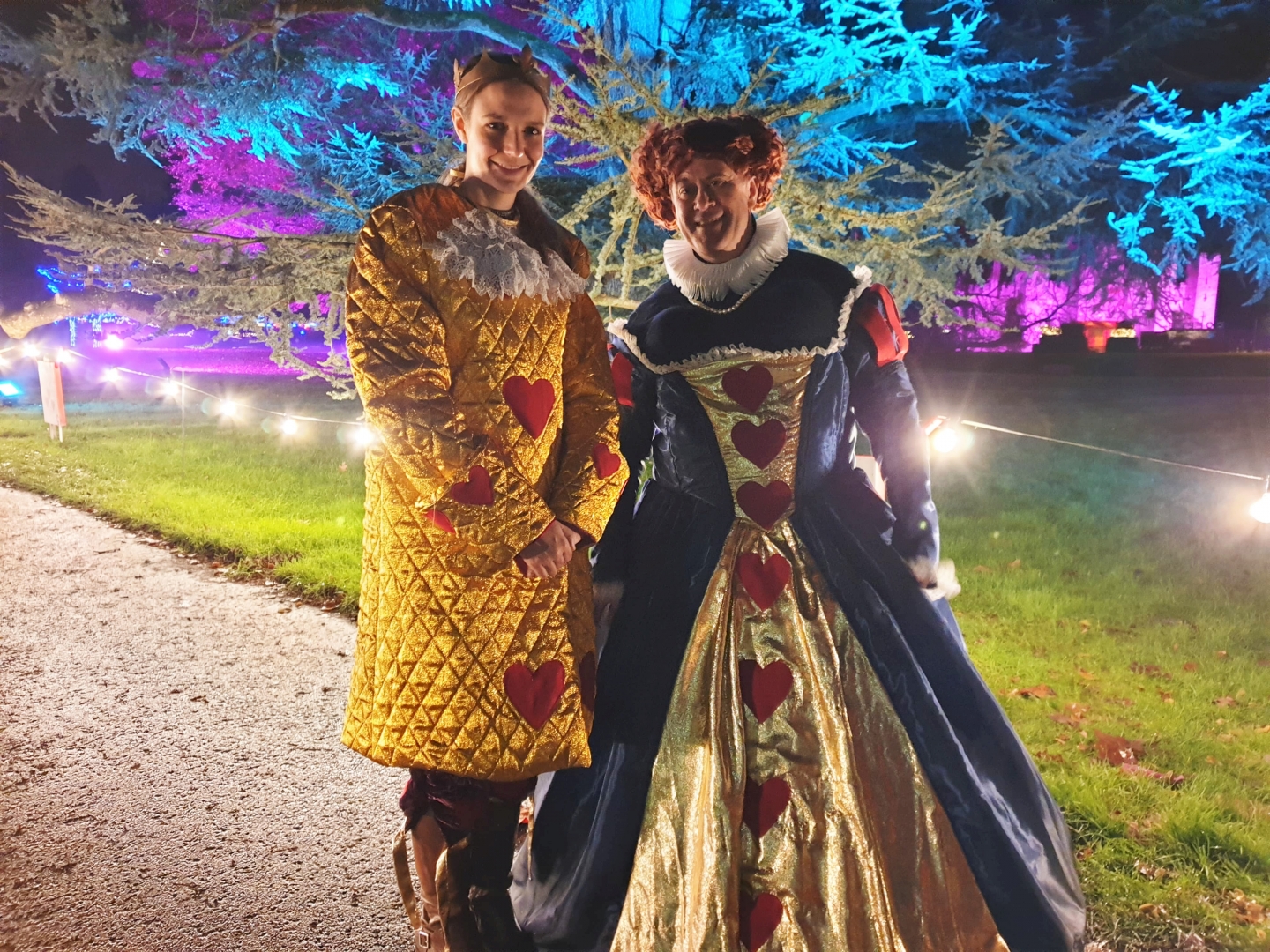 With the clock nearing Autumn’s bedtime and the night air becoming increasingly colder, our visit had come to an end. For me, the only disappointment was the absence of the light show on the lake. I really enjoyed that last year!  We had such a lovely evening at Hever Castle and I’ll continue to recommend it to anyone wanting to do something ‘Christmassy’! 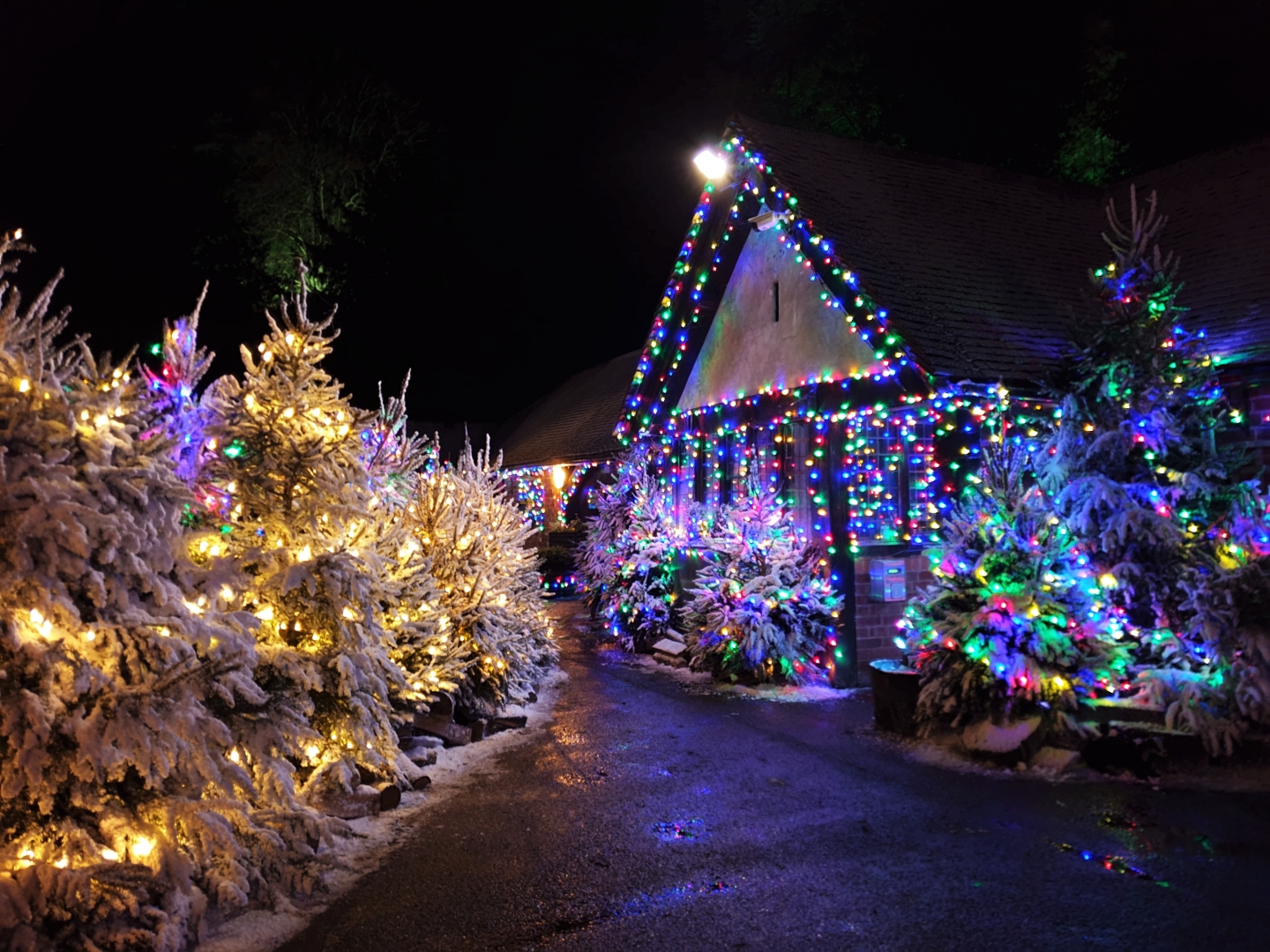 Disclosure: We were invited to Hever Castle to visit Father Christmas and

What’s On In Medway & Gravesham February Half Term 2022

One response to “Alice in a Christmas Wonderland at Hever Castle”