Misery in Margate and fun in the sun

Do you ever have days where you feel like everything is conspiring against you, despite your best efforts? Of course, we all do. Although, I actually have a sneaky suspicion that I have more than the average person. On Saturday, the hottest day of the year so far, I was desperate to have a lovely day on the beach at Westgate with my little family. However, the day didn’t go entirely to plan.

Please note: This blog post may be a trigger for some as it discusses anxiety and panic attacks.

During the week, the weather forecast had shown that it was going to be a scorcher. Knowing that I wasn’t scheduled to work on Saturday, I had instantly started thinking about going to the beach. We hadn’t been yet this year (apart from in the winter, which doesn’t really count as a proper beach day!) Autumn had so much fun playing in the sand on holiday last summer and I was really looking forward to the idea of doing it again. I was also intrigued to see how much her sandcastle building skills had developed over the last year!

My husband, however, wanted to go to the zoo. I wasn’t so sure, as going to the zoo entails a lot of walking. When it’s super hot, I want to chill out with a sea breeze, not trapse around. Exhausted, I didn’t bother arguing with him. With no real plans set in stone, he arranged to go out to breakfast on Saturday morning. Messaging him, he still clearly wanted to go to the zoo. His reason? Everyone would be at the beach and he didn’t fancy the traffic! As such, I came up with a plan. If he didn’t want to drive, we could catch the train to the beach instead. Doing my research, I decided on Westgate-on-sea and started packing swimwear and beach towels. Of course, I packed a bucket and spade for the all important sandcastles!

Disorganisation is not the way forward

It turned out that the lack of knowing what we were doing really set us back and we didn’t get to the train station to catch a train until about 2pm. It was so hot I felt dizzy and the train was packed (but fortunately, cooler). We were hoping Autumn would have a nap, but she kept crying as she insisted on sitting on a chair. There was only one seat so I sat her on my lap whilst Dave (my husband) stood with the pushchair.

Autumn was a total pain the whole journey, probably due to her tiredness. She was throwing herself around, accidentally kicking the guy next to me. She wouldn’t keep still and was noisy and the whole thing just gave me a headache. I felt utterly depleted and so fed up about everything. If only I had insisted on the beach and argued for it in the first place, I’d have had half the problems I was facing.

Unfortunately, our train had arrived 2 minutes late due to how busy it was. Before the delay, we had worked out that we had 5 minutes to get to a different platform for the train to Westgate. As such, we rushed off of the train. Or we tried to, anyway. Autumn was being a nuisance about it as she wanted to walk rather than be carried and goodness knows what else, I didn’t have time to listen.

Once we were off the train, Dave took the pushchair and bags, I took Autumn and we walked along the crowded platform as fast as we could to the lift. It was broken. Typical. So we headed to the steps instead. I was struggling to keep up with the weight of Autumn and called to Dave to swap as it was slowing us down. He came back and we swapped over quickly, me racing along with the pushchair and folding it down mid-walk so that I could carry it down the steps and back up the other side to the platform. It was all such hard work in the heat. This was met by our train leaving the platform just as we got there.

I really couldn’t believe it when we were told by a man on the platform that it would be another HOUR until the next one came in. I didn’t really want to talk to Dave or Autumn, but tagged along to the toilets as Autumn needed a nappy change. We then headed outside to see if we could get a bus to Westgate instead. We saw one pass on the main road shortly after we got to the (wrong bus stop) and then decided it wasn’t worth waiting for the next one.

Meanwhile, Autumn was still being a nuisance. She wasn’t listening and kept running off. That combined with the heat, period pain and my hunger were making it difficult to think. The next bus wasn’t going to be for ages either. Instead, I suggested we go and get something to eat as we were all hungry. Autumn was running around again making it difficult, so we put her in the pushchair, much to her upset. People were staring at a completely deflated me as she hollered next to me. Once Dave brought us over sandwiches, she cheered up a fair amount.

I, however, was not feeling cheery. Everything was just too much. I had just wanted a nice family day in the hot sunny weather on the beach. As I often work weekends, my husband works weekdays and the British weather is so unpredictable, I didn’t know whether a suitable day would come up again this summer. As far as I could see, the day was ruined. We weren’t even going to get onto the beach until 4.30pm at the earliest.

The sandwich was the last vegetarian one left and contained spring onion which sometimes gives me stomach cramps and bloating, so that wasn’t right either. Half way through it, I burst into tears. Not wanting to be stared at any more, I walked out of the cafe and sat on a bench near the train station just crying for a few minutes. Once I was done, I walked back and managed to find Dave and Autumn on the platform. Soon afterwards, we caught the train one stop to Westgate. 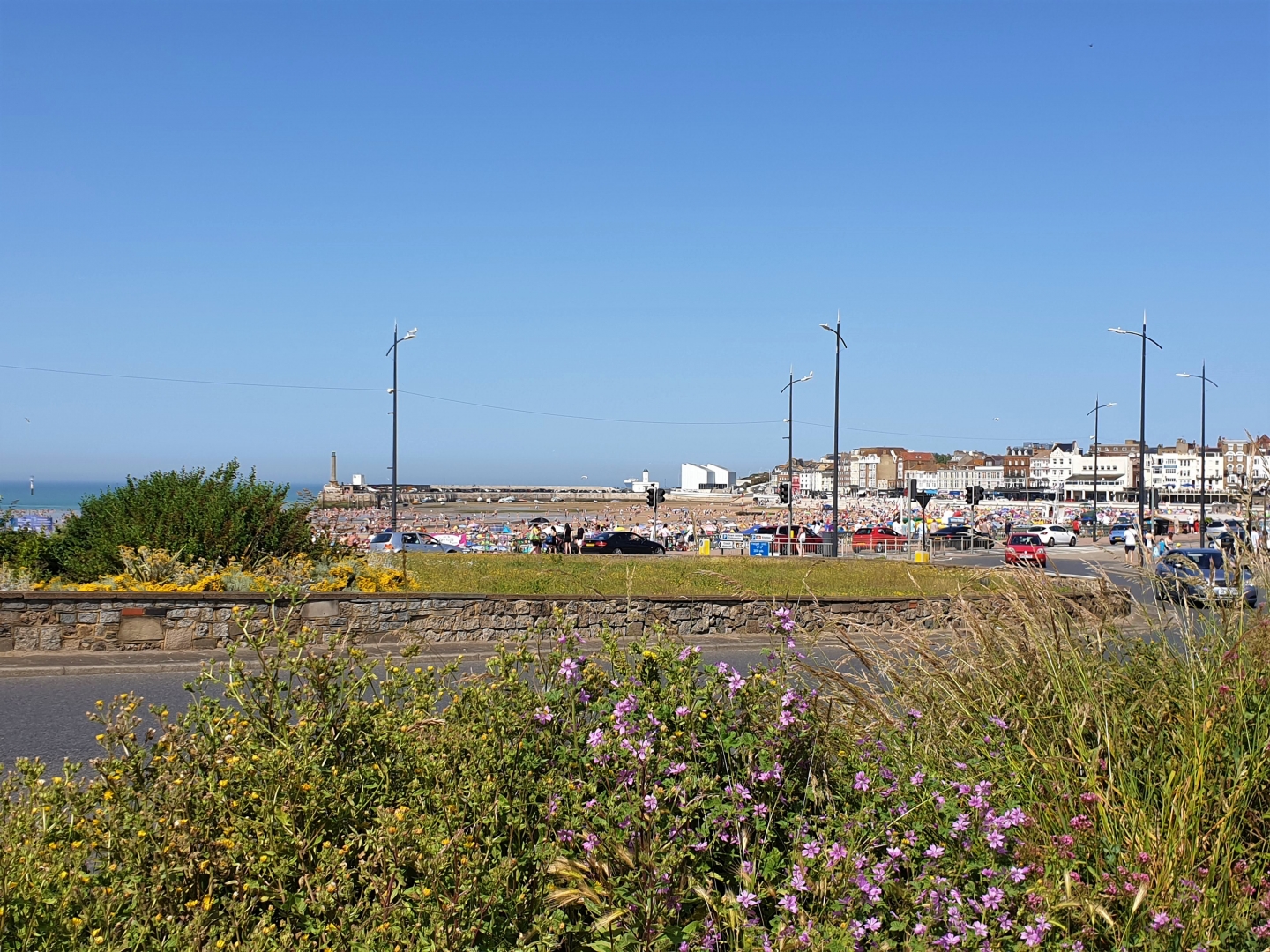 My view of Margate from the bench

Fun in the sun

Arrival at the beach

Fortunately, it was still lovely and hot when we arrived at the beach after the short walk from the station. It’s a fantastic little beach for taking toddlers and young children to. You can easily keep them within your eyesight and there are toilets and refreshments very close by. We could also use the pushchair on the beach with ease and it was the perfect kind of sand for building sand castles! There was also the reassuring presence of lifeguards on the beach. When Autumn’s a bit older, there are even some little rock pools and a tidal paddling pool.

Once we had settled down, it was almost 5pm. So much for a “beach day”! Still, I tried to make the best of things and got down to building sand castles with Autumn. She is brilliant at making them now, hardly requiring any input from us at all! I think her favourite part is tapping the bucket with the spade. 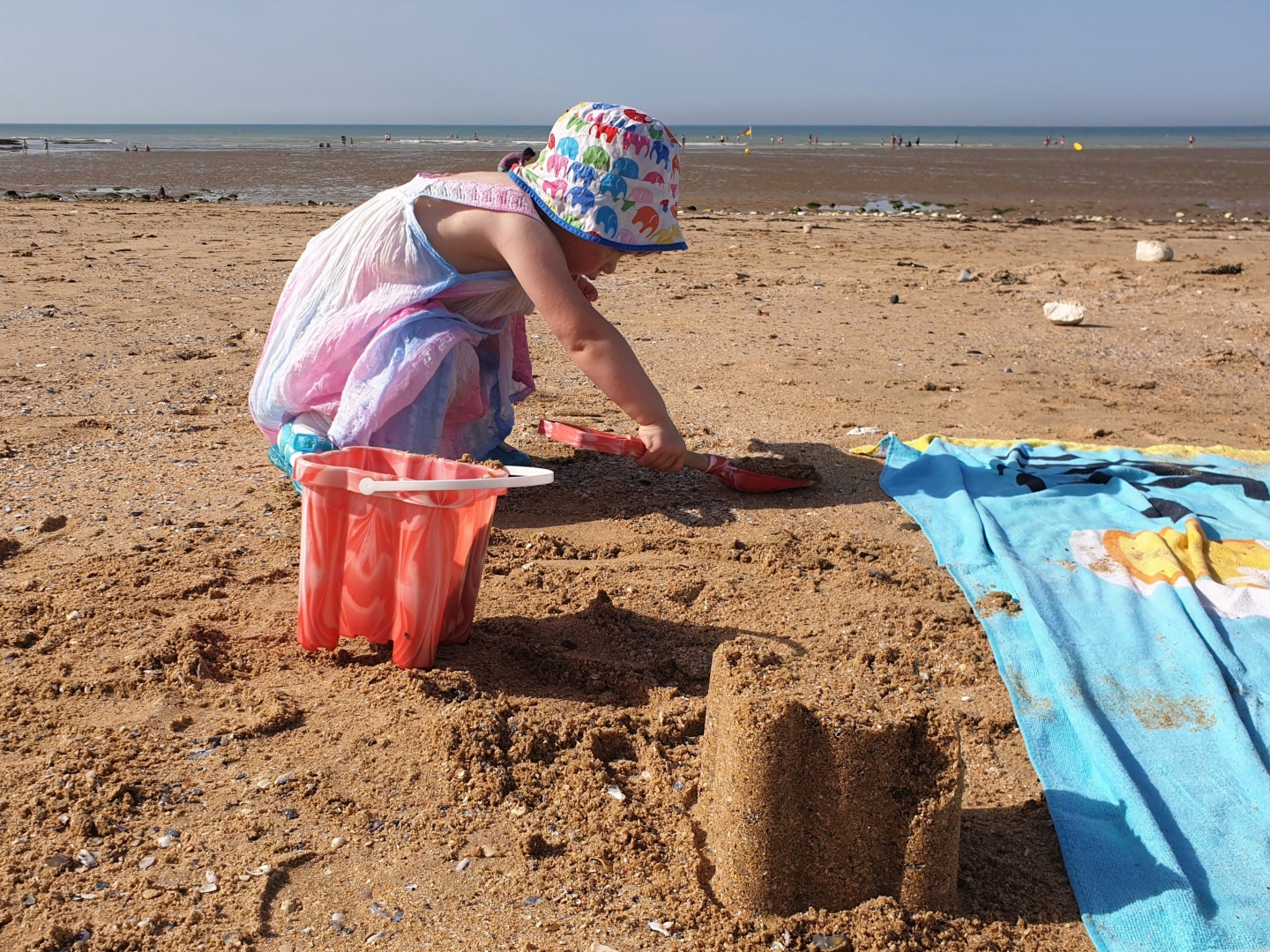 Dave went to get us all an ice cream. Autumn had a strawberry Mini Milk and we both had refreshing lemon sorbet.

Splashing in the sea

After we’d finished our frozen treats, we asked Autumn if she’d like to go for a paddle in the sea. She wasn’t keen on the idea. I think she may have remembered falling over in the sea in Wales in January and getting upset. However, I was keen to have a little cool down so I headed off on my own. Only a couple of minutes passed before I saw Dave and Autumn heading towards me. She took a little convincing at first, but I talked her around to the idea of splashing and having fun. Once she stopped being so unsure she loved it! She didn’t stop splashing, kicking, jumping and giggling.

Autumn actually loved the sea so much that she didn’t want to head back to the beach. Of course, when we suggested making some Paw Patrol characters out of sand she changed her mind though. We had a lovely couple of hours, meandering between splashing in the sea, making things out of sand and looking at shells. I even got a few minutes on my own to just lay there, attempting to relax! The sky was a beautiful colour and the sun felt wonderful on my face. I always enjoy the sounds of the waves crashing and children having fun, too. 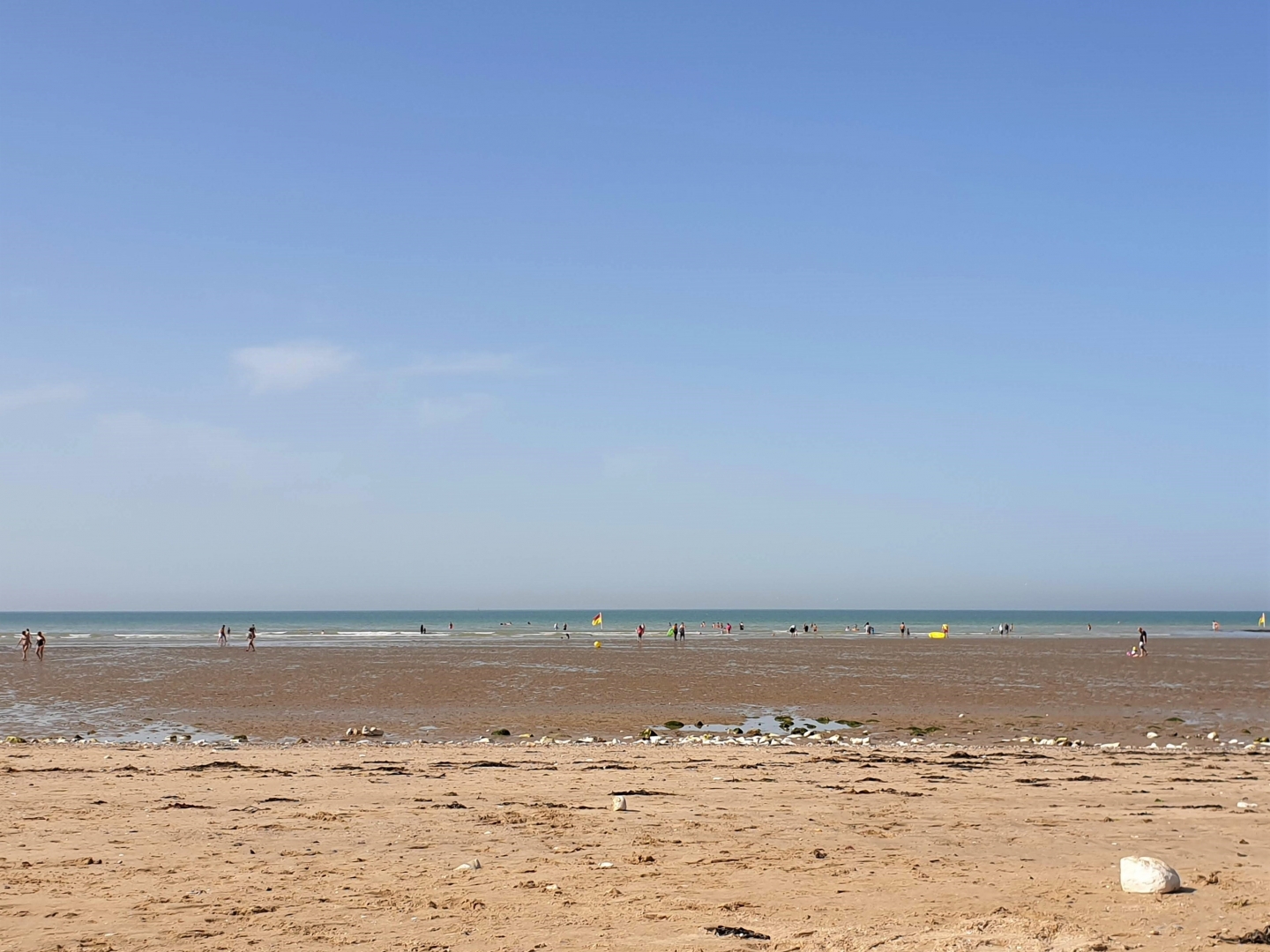 My view of the sea from my spot on the beach

Unfortunately, the time flew as we’d got there late. It was soon time to head back to the train station as I had to wake early the next morning for work. Even more unfortunately, it was a bit of a rush as we wanted to get there well ahead of time. We wanted to make sure we didn’t miss the train, as it was going to be another hour until there was another one. I was overheating and I think a combination of over-exerting myself and the stress of the day finally got to me as I suddenly felt very anxious. I sat there, trying not to go into a panic attack.

Annoyingly, when the train arrived, I did go into a full-blown panic attack and refused point blank to get on it. For the second time in the day, I burst into tears. It took almost the entire hour between trains for me to calm down enough to get onto the next one. I think Dave was extremely relieved that I actually got on it. I still felt quite anxious, but as the journey went on, I found myself starting to get back to normal.

In the scheme of things, I know that I can’t really complain. It was just that I had an expectation of how things were going to be in my head and they went so differently. I’m only human and sometimes things just do feel a bit much when you’re going through them. Beach days are really special to me and I don’t like the thought that that could potentially be the only one I get to have with Autumn this year. Even more so as the day went so wrong and we barely had any time.

Sometimes when these things happen, I think you just need a really good vent. Talking to my mum as it was going on and writing this post on the train home really helped me. If nothing else, it goes to show that if you’re reading this and you’ve gone through similar, you know you’re not alone. It’s a reminder that behind all the picture perfect stories you see on Instagram, there’s quite possibly a story like this behind it that you don’t know about.

Review: The Lion in Farningham

2 responses to “Misery in Margate and fun in the sun”