Last Friday was a very exciting day indeed. We were invited by Netmums to attend the press launch of This Morning Live. This was held in the studio of This Morning itself, at ITV in The London Television Centre. The event was full of fun and information about This Morning Live, which is being held at the NEC Arena, Birmingham from 18th-21st May 2017.

This Morning Live is an exciting event happening in Birmingham next month. The website says “It will bring your favourite TV show to life!”

What will be there?

There are going to be four areas; here is a summary of them:

Who will be there?

I was both excited and nervous, but most of my energy was focused into looking after Autumn. 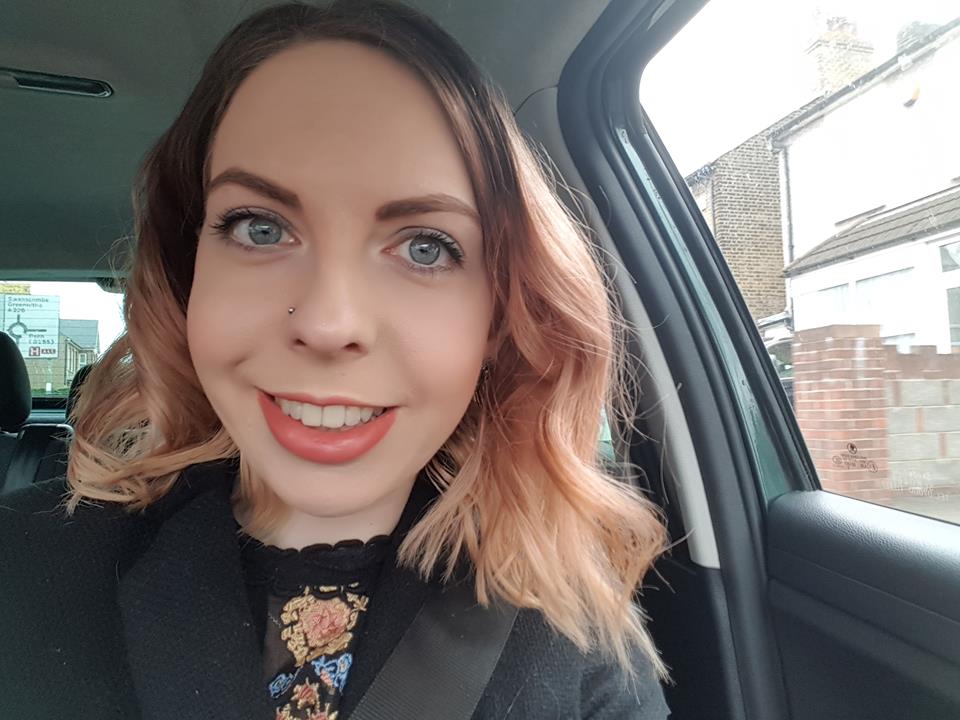 It was Autumn’s first train journey and visit to London, so I was a little worried. However, she seemed to love it and was fascinated by the world passing her by! She got so excited that she did a little dance at one point. 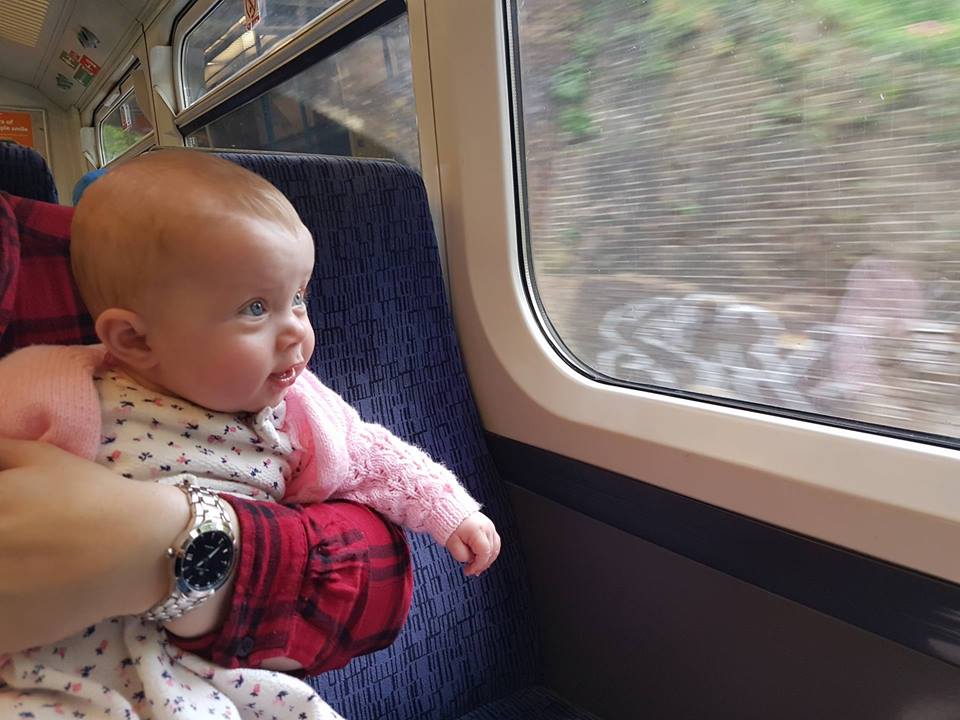 When we arrived at ITV, we waited in reception for someone to escort us up to the studio. 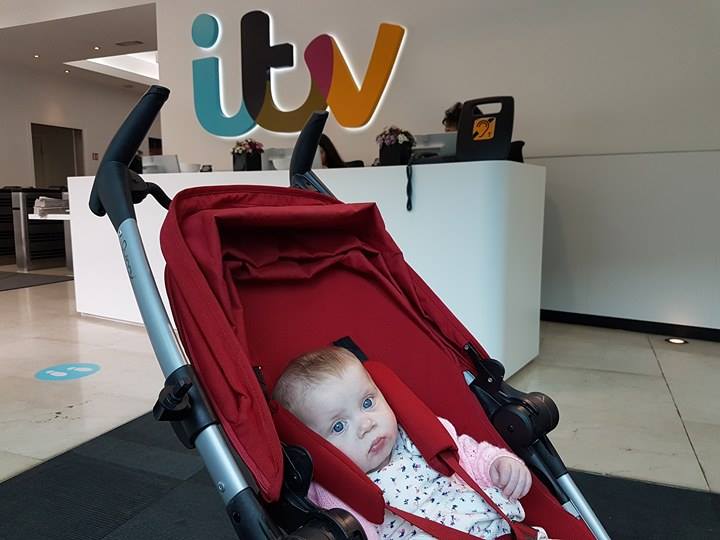 It was amazing to walk past the props and go in the lift that so many famous faces have stood in! It was even more amazing and surreal to walk into the studio that I’ve watched on TV so many times.

What I found out

What the presenters eat for breakfast

When talking about the Food & Drink area, the presenters discussed what they have for breakfast. Rylan Clark-Neal has never really been a breakfast person. However, he said that he wants to eat granola because he thinks that it sounds fancy!

Dr. Ranj likes muesli because it’s convenient, quick and easy. Of course, muesli is healthy too!

Trinny Woodall has LOTS of delicious foods for breakfast. I was surprised by how much she has! One of the other presenters joked that she probably has a watermelon. It actually transpired that she often does start the day with watermelon! She then has cereal with strawberries and blueberries. Later in the morning she then goes to Pret and gets a cappuccino and croissant.

Bryony Blake starts the day with avocado and marmite. After Rylan’s earlier suggestions that granola is posh, she revealed that she makes her own granola! At this point Rylan revealed that he has never tried an avocado. 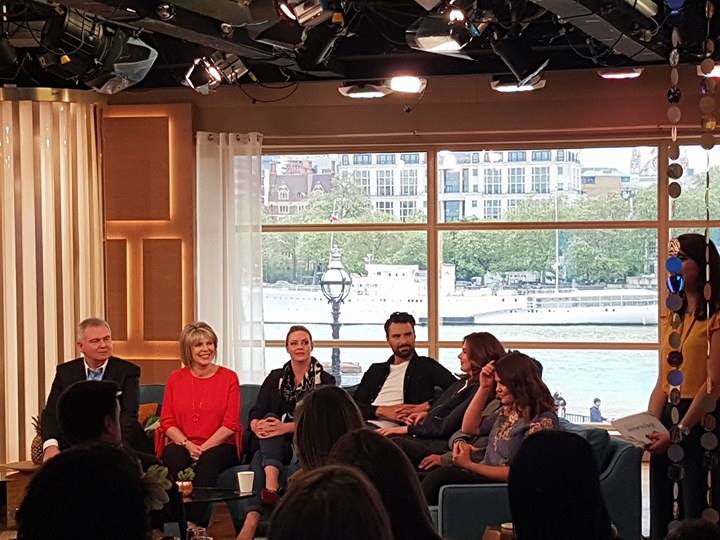 Her top tip is to buy a cute pair of shoes that you can pair with different outfits to change things up a bit!

She suggests having basics in your wardrobe that you can mix and match. You should consider things like whether to have tops/blouses with collars or not. Trinny says that if you have a short neck, collarless tops will be more flattering.

My personal favourite was that you should have some fail-safe items in your wardrobe. Things that you can just put on and feel amazing in! I have to say, no matter what is going on, there are some dresses in my wardrobe that I can put on and just feel so much better in. Sometimes in my mum uniform of a jumper/top and cardigan and jeans, I can feel a little frumpy. The dress I wore to the launch is one example of that!

Trinny reminded us that when you have baby weight, you shouldn’t worry about it soon after giving birth. After all, you didn’t put it on in a couple of months, so you shouldn’t expect to loose it in a couple of months! I agree, in producing and birthing a child our bodies have done a wonderful thing. As I said in my previous blog post “Things that have changed since I became a mum“, we shouldn’t put so much pressure on ourselves.

A funny but embarrassing encounter between Ruth, Eamonn and Will.i.am

Once, Ruth Langsford bumped into Will.i.am while she was talking to her husband and This Morning co-presenter Eamonn Holmes. She suddenly said mid-conversation, “Oh my God, it’s Will.i.am!” Will.i.am apparently just looked at them. Trying to diffuse the awkward situation, Eamonn told him “We’re not two deranged fans, we’re TV presenters, Eamonn and Ruth!” Will.i.am just gave them another strange look and shook his head slightly; he had no idea who they were!

The presenters are all hilarious and have great banter

Talking to Dr. Ranj, Eamonn said “All you get is people coming in and complaining, my feet, my bowels…” However, in his Northen Irish accent it sounded like he said balls! Of course, the other presenters picked up on this and everyone laughed.

According to Rylan, all the crew and presenters know each other by name and are always having a laugh. He also had his share of funny moments, including gushing over Steps and telling us that if you could mime on X Factor he would have won!

Ruth proves that older women can be attractive

You don’t have to be a supermodel in your early 20s to be beautiful! Ruth looks lovely on the television screen, but she looks even prettier in real life. Her hair and makeup were perfect and she has a gorgeous smile.

At one point, Rylan was kind of on his own, looking for where he had to go next. I took my chance and said “Rylan!” loudly. “Yeah babe?” he said looking down at me (he’s SO tall!) For a second I was slightly star-struck and didn’t know what to say. I’ve been watching him since he was on Katie Price‘s reality show, Signed, back in 2011!

“I love you, I just wanted to say hi!” I said, thinking “OMG, why did I just tell him I love him? That’s SO unprofessional I probably seem like some crazy fan now”. To be honest, he’d been getting giddy over meeting Steps earlier in the day, so hopefully he could understand to some extent!

“I just think you’re really awesome, I’ve been watching you since you were on Katie Price’s programme”, I said. “Oh my God, way back!” he replied. “Yeah”, I said, “My Nan loves you too! Do you mind if I take a picture?” “Yeah, go on!” he said, as I got my phone out and took a selfie. 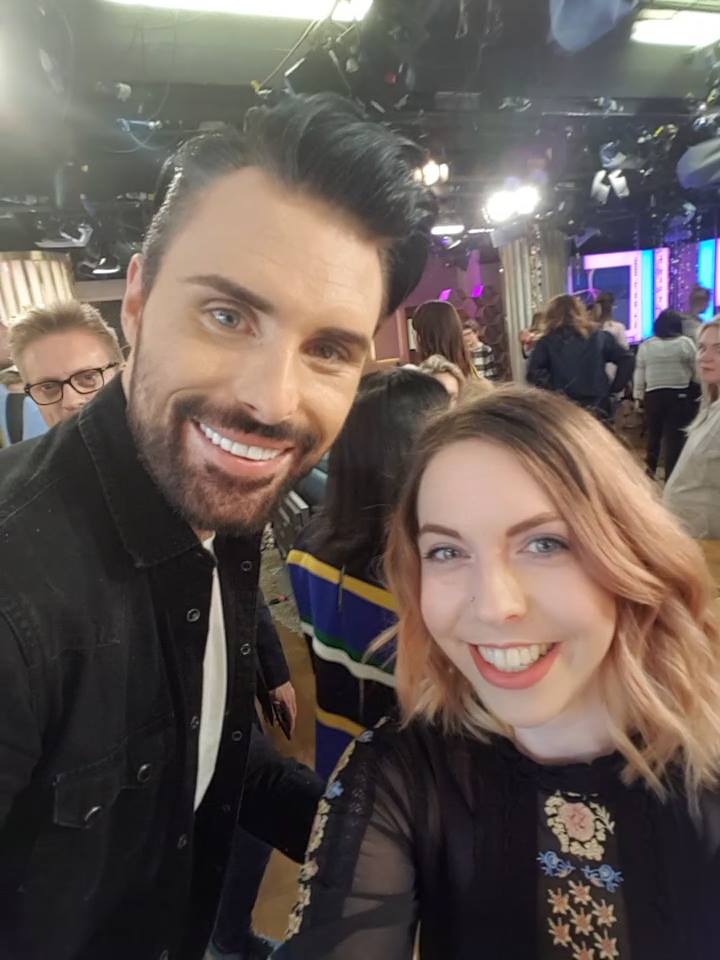 “There you go gorgeous!” he said, looking at the photo on my phone, “Tell your Nan I said hi!” he told me. “Thanks, I will do!” I said grinning as he walked off. My Nan was thrilled when I sent her the picture and told her! “Aww, he’s lovely!” she said.

A minute or so later, I went over to the This Morning sofa where a lady was interviewing Eamonn and Ruth. Eamonn saw me standing there and smiled and mouthed “Hello!” at me. “Hello!” I mouthed back. Unfortunately, I missed out on taking a photo with him. I also missed out on seeing him in the corridor later, as I needed the loo. “These have got to be the best behaved babies in the world”, Dave told me Eamonn said beaming at Autumn as he passed her and another couple of babies with their mums. 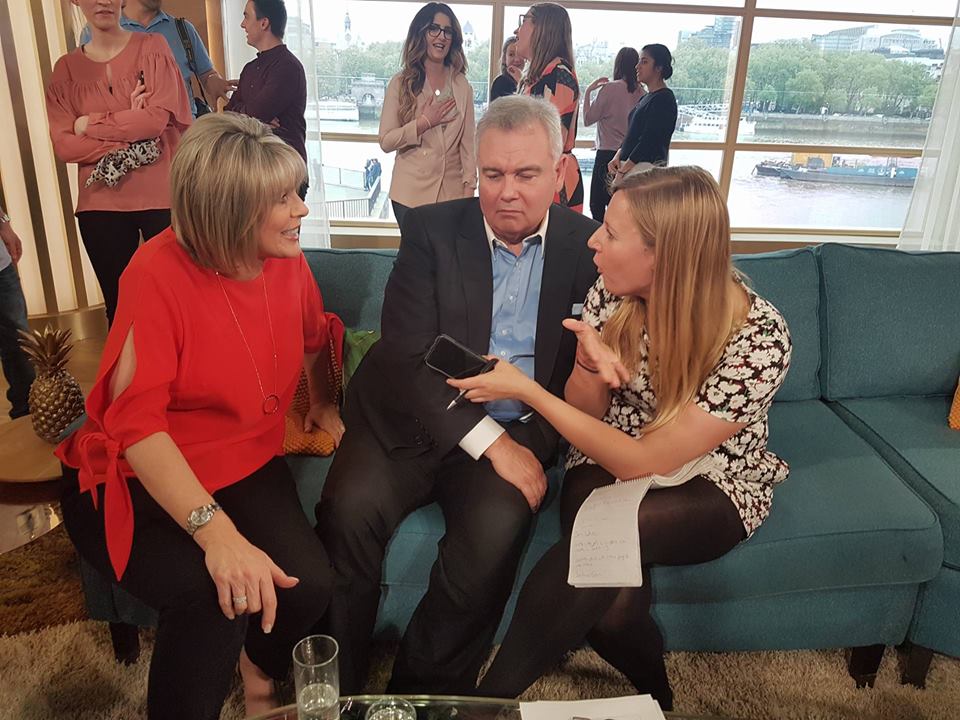 The green room and studio have amazing decor

I love the decoration in the green room at ITV, I wish my lounge looked like this! 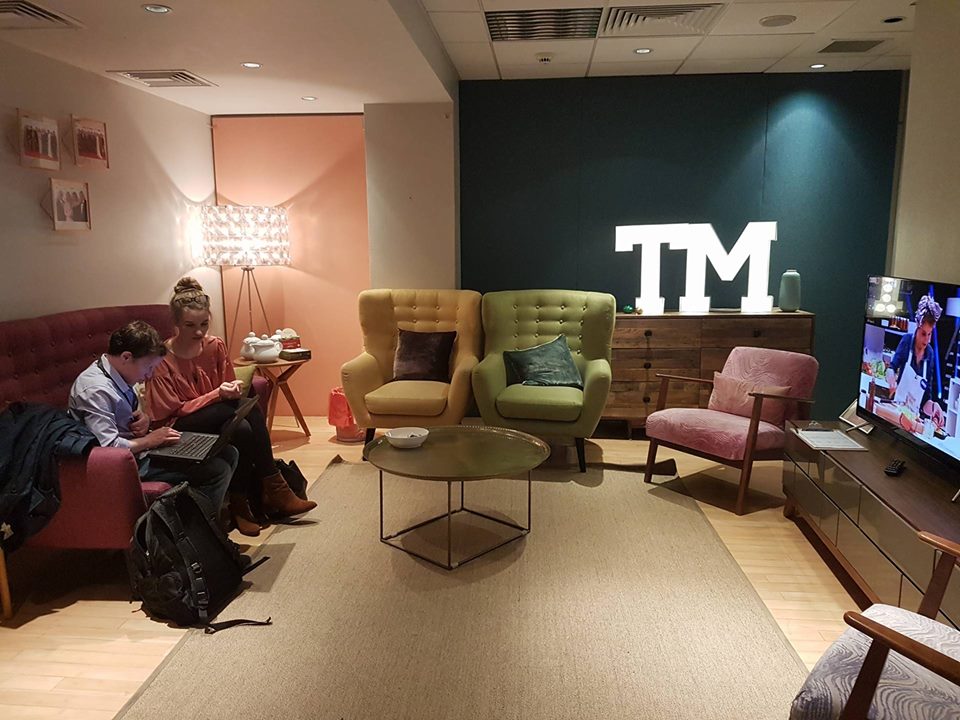 The studio was beautiful too. 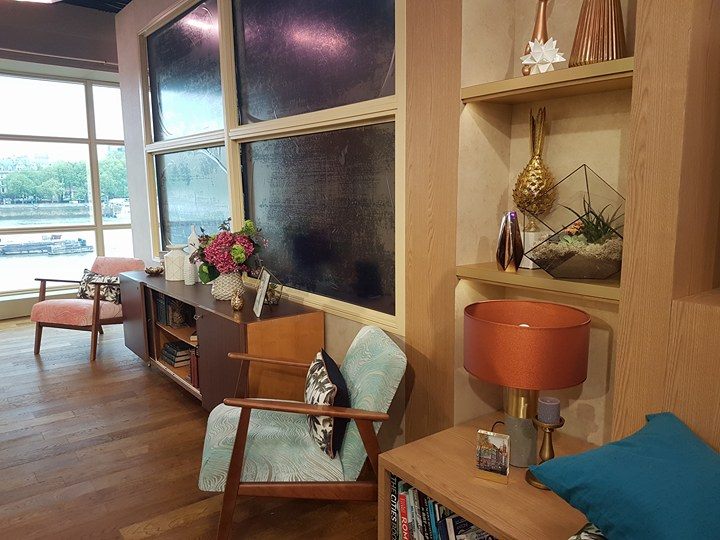 Even Autumn admired the cushions in the studio, I loved the contrast between them and the sofa. It was amazing to sit on a sofa where so many famous people have sat. 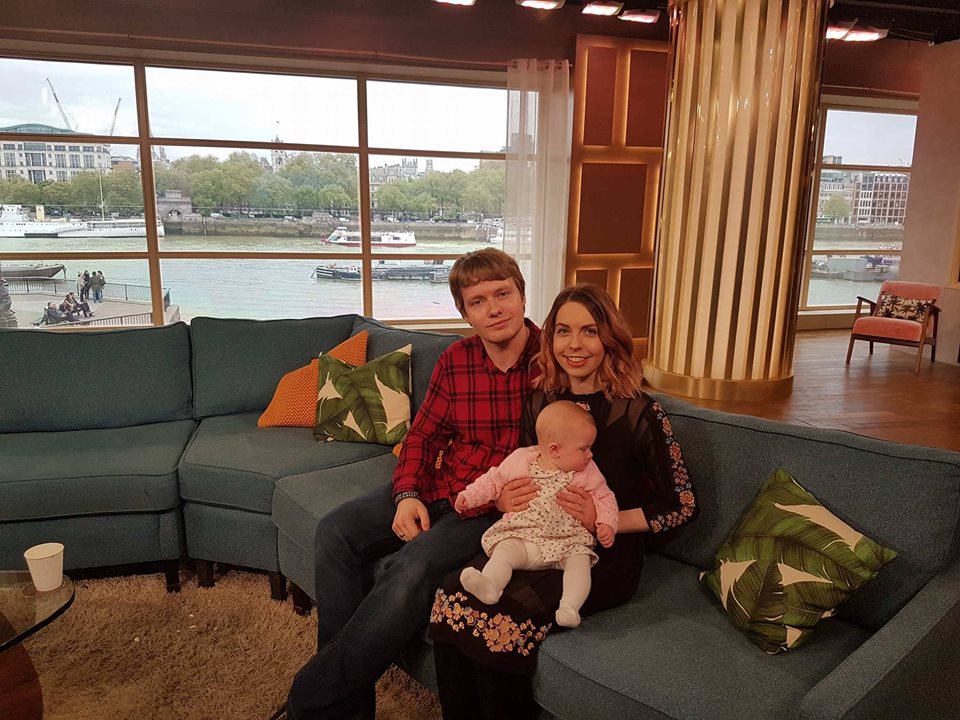 Unfortunately, the lighting wasn’t right in the photo Dave took, but I sat Autumn on the sofa too! 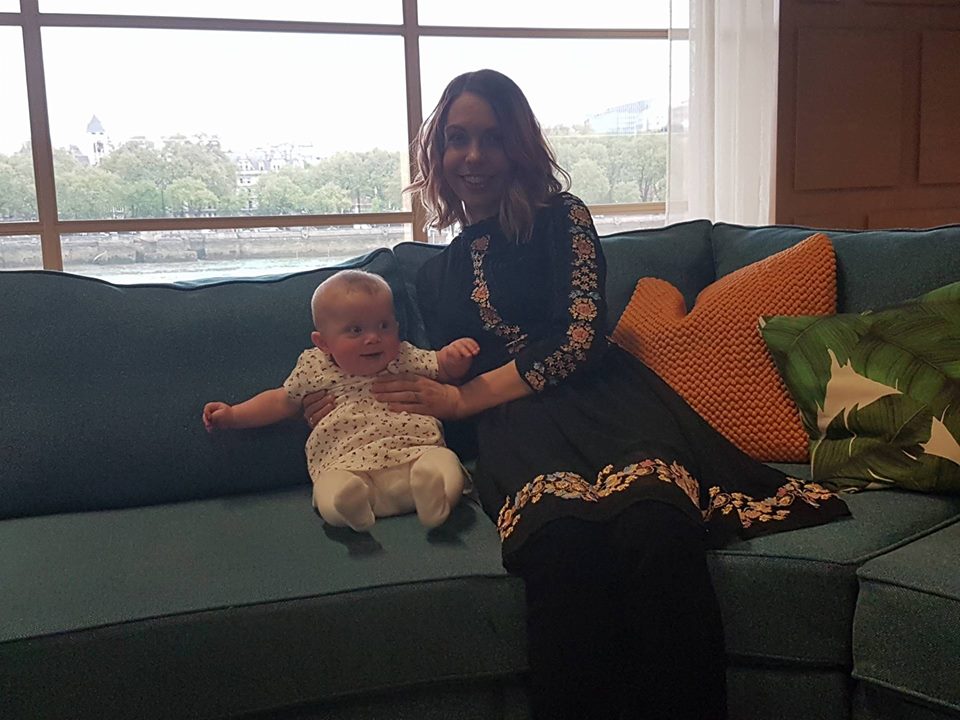 Just like the rest of the studio, the kitchen was absolutely gorgeous; white with contrasting copper utensils and gadgets. 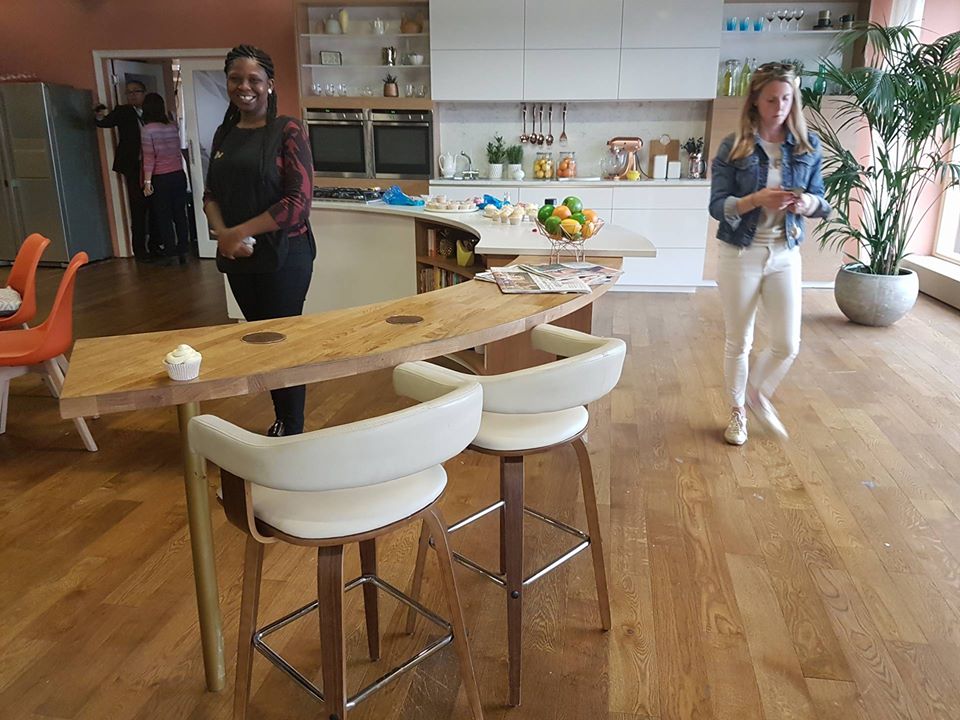 Of course, it looked even more gorgeous with the beautiful cupcakes that Charlotte White had demonstrated making! 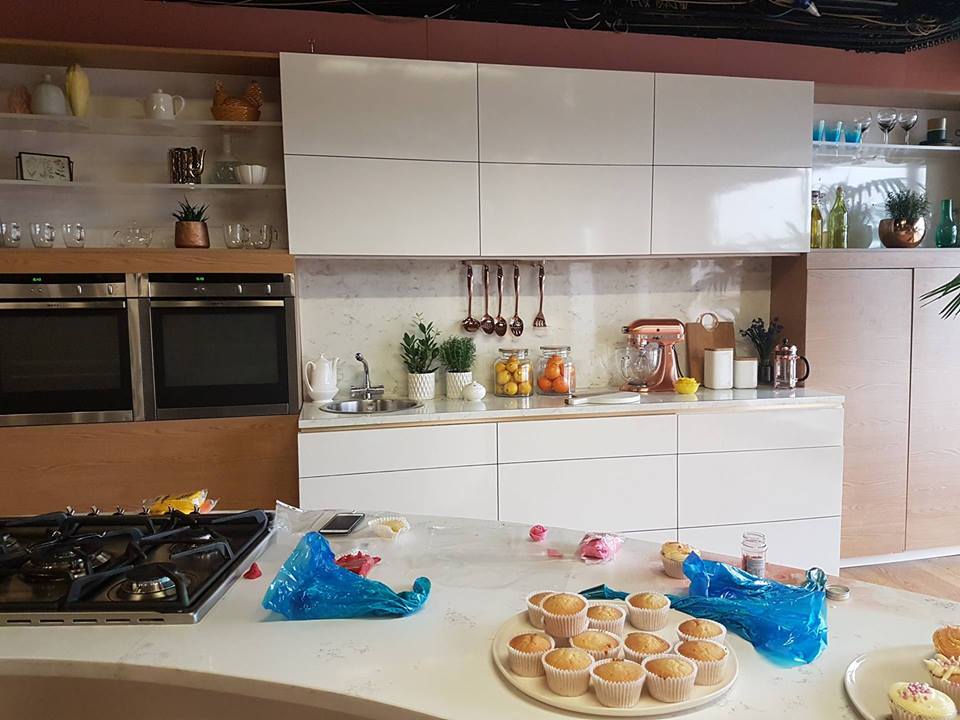 By the way, that really is the river that you can see behind them when you’re watching This Morning. It isn’t a green screen! 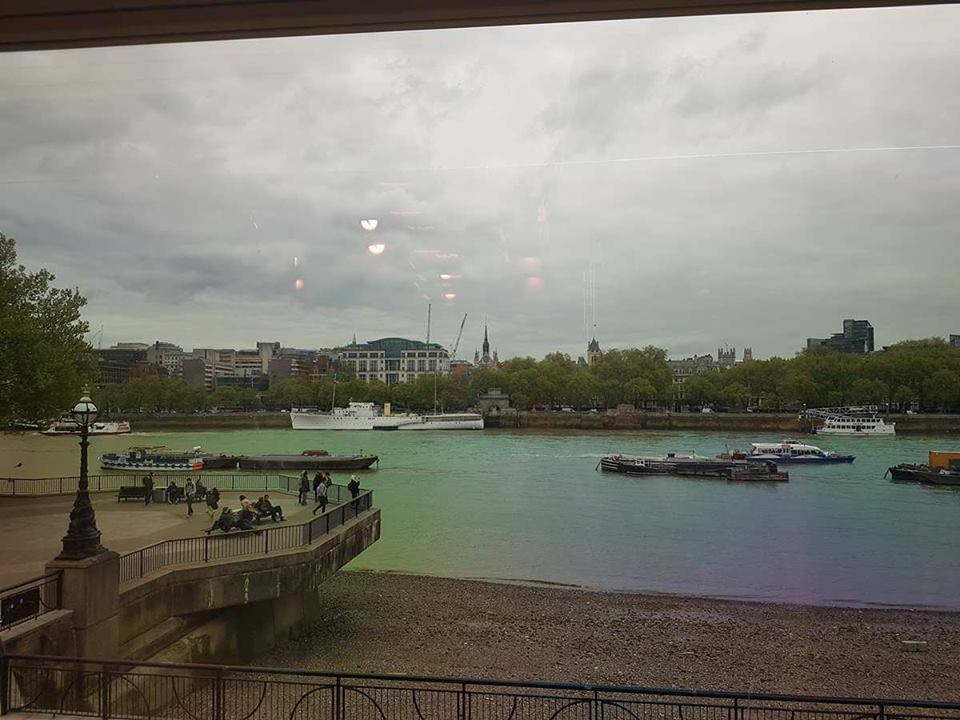 What else was at the press launch?

We had an amazing afternoon tea, which was provided by Lo Salt. There were pink and blue macaroons on napkins of the same colour to match the studio. 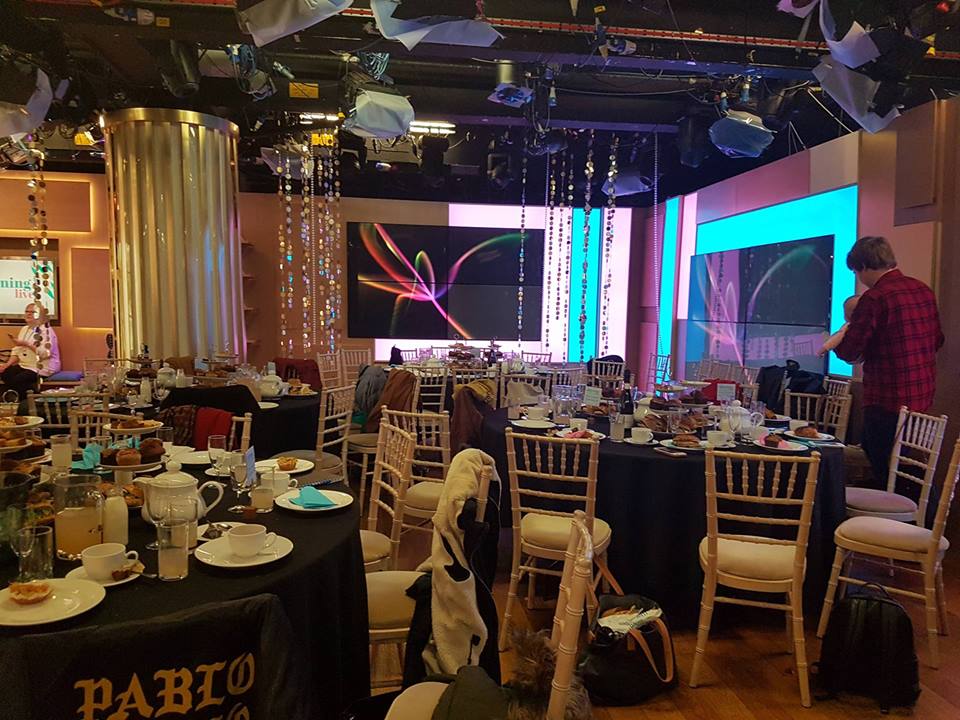 There were gorgeous cakes and rolls. Much to the delight of many, there was also prosecco on each table. Sally Jee of the Netmums PR team was kind enough to pour us a glass! 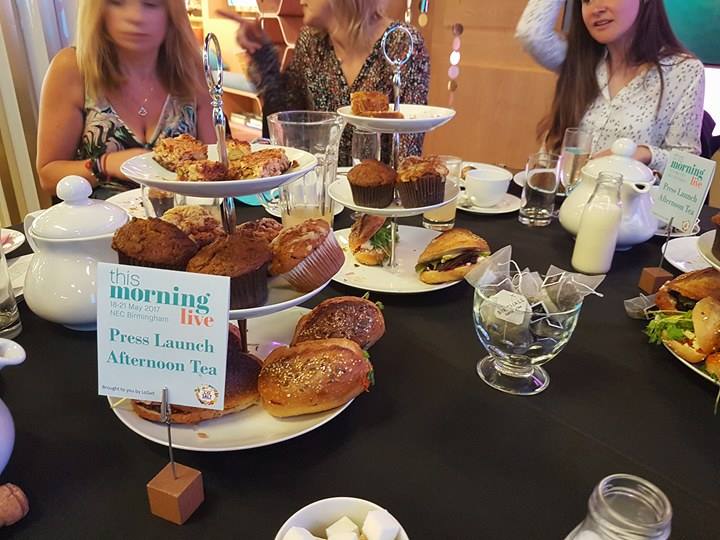 We had the opportunity to meet two beautiful guide dogs, Lexy and Luna. Luna is the guide dog puppy that is on This Morning twice a week. 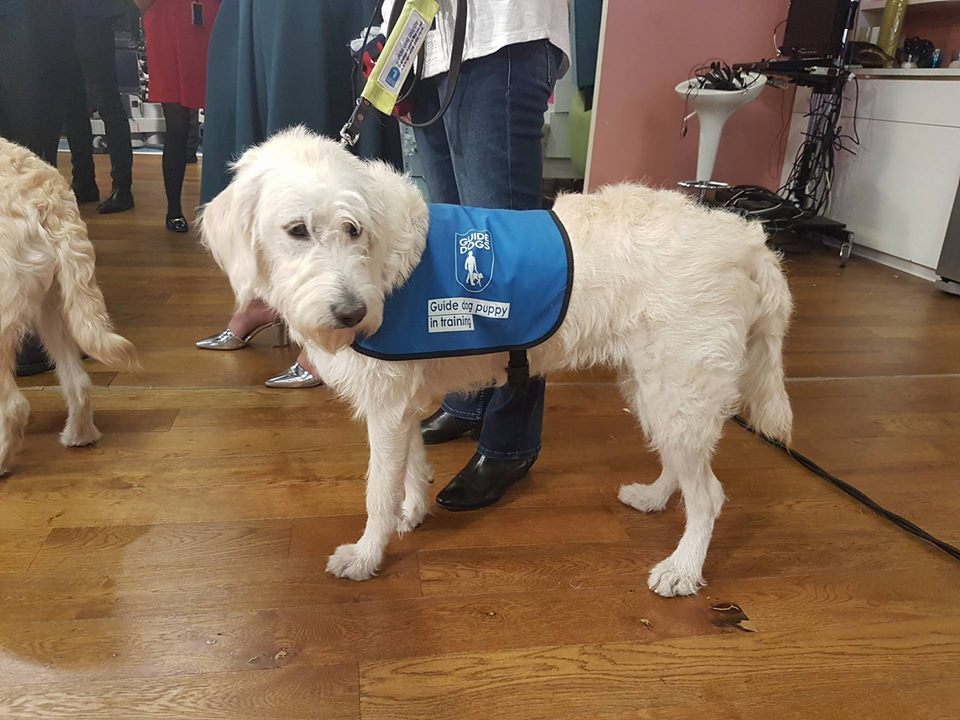 Autumn and I loved meeting them and giving them a good fuss! 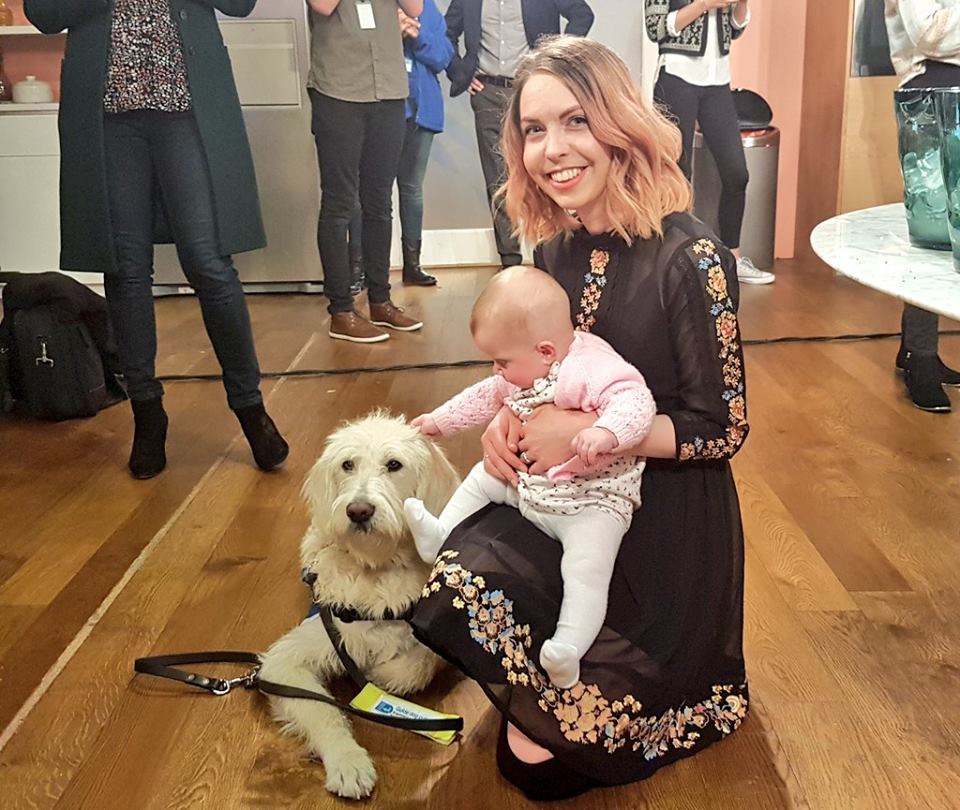 We had the most amazing goody bags! See what was in mine here:

Autumn seemed to enjoy her time in the studios. 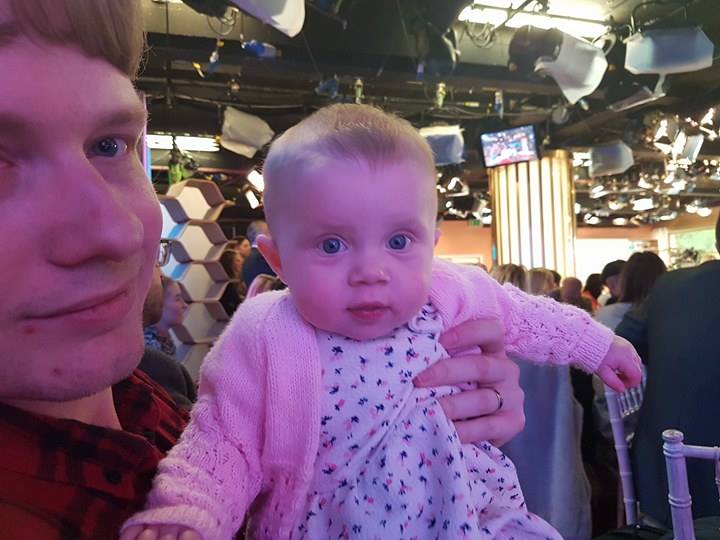 She enjoyed it even more when a man who seemed really nice gave her the Guide Dog from his goody bag. 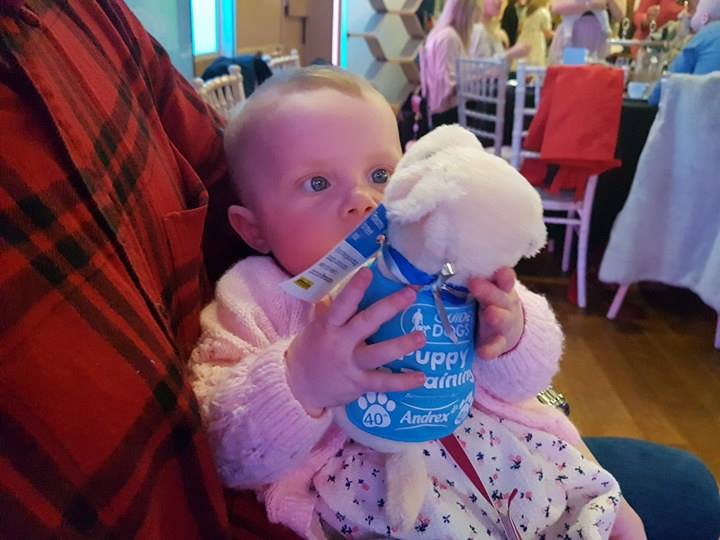 As with everything at the moment, she tried to eat it! As we have two now, we’ll call them Luna and Lexy after the two we met at the studio. 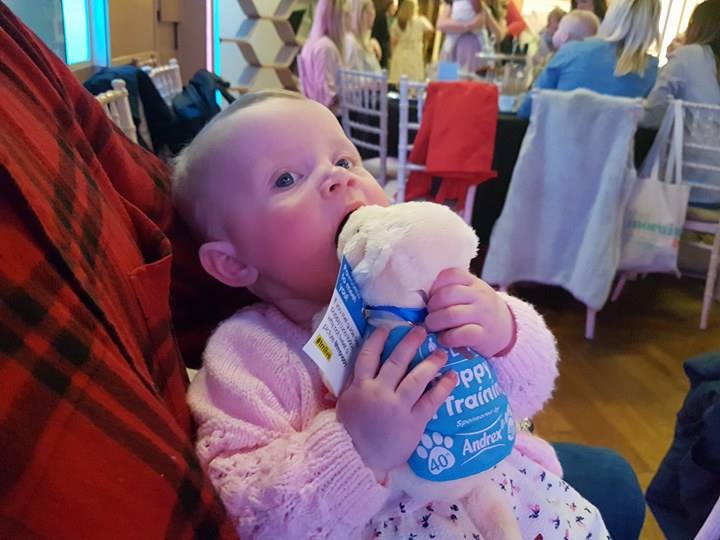 According to Rylan, at This Morning Live “[The presenters] get to do what we’re not allowed to do [at work]…and the channel can’t sack us!” The atmosphere in the studio at the press launch was so exciting, it was a really fun afternoon. If that was anything to go by, This Morning Live next month is going to be absolutely amazing and I can’t wait! 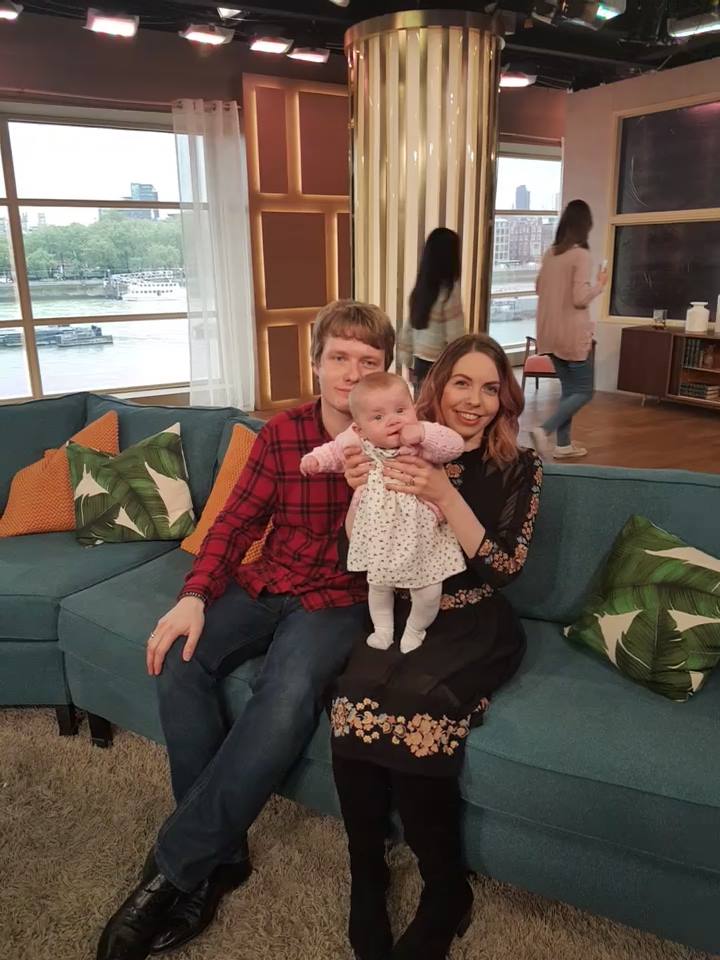 You can see a list of exhibitors here and tickets are available for purchase here.

6 things to consider when buying your first home

Ways Your Body Can Change After Childbirth

Why you should use a mortgage broker