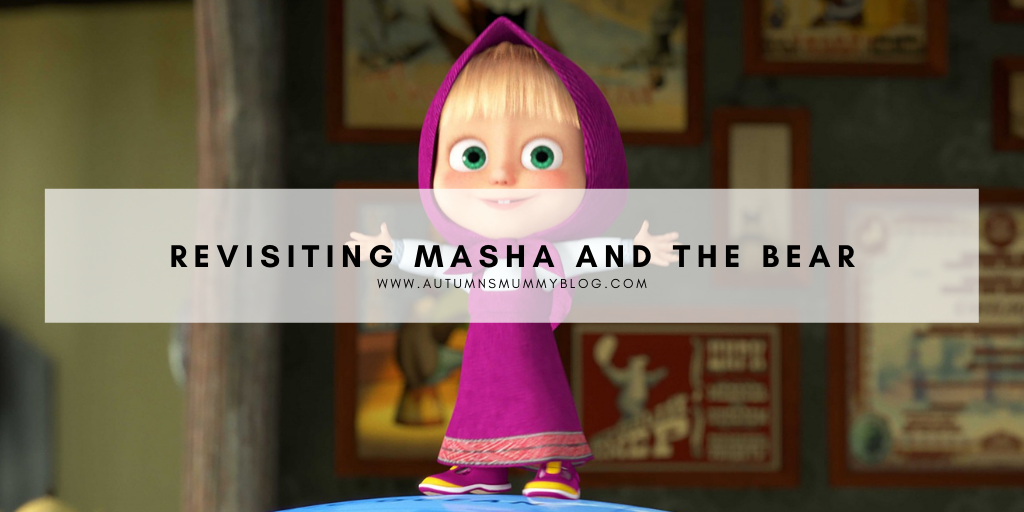 It’s been over two and a half years since I wrote a blog post about why I banned my toddler from watching Masha and the Bear. It quickly attracted a lot of attention and I spoke on the radio about it. Even today, it remains one of my most read blog posts…and my most trolled. Many people are  supportive in an over-the-top kind of way about Masha and the Bear, it would seem. However, I’m sure everyone has programmes they don’t like their child watching. Especially if it effects their child’s behaviour in a negative way. Even more so if their child gets scared or upset by it. I don’t personally see how changing the channel as a result of that makes me a ‘pathetic millennial snowflake’. Quite recently I’ve had a couple more weird comments from people which brought Masha and Masha back to the forefront of my mind. It feels like time to revisit it.

Masha and the Bear is aimed at pre-schoolers and has been a global success. However, I think it’s too complex for them to understand the lesson to be learned behind each episode. In fact, it isn’t even always clear to me where the moral message is. If they see a cute character with big eyes that is the same age as them, (Masha is 3), they will relate to her. This may well lead to them imitating her behaviour. Before someone says it, no, I’m not saying that they will decide to dress a pig in clothes or go off into the woods on their own. Yet it isn’t just my child who mirrored Masha with hyperactive, naughty behaviour after watching the programme. It’s not a coincidence.

The fact that it scared my daughter as a two and a half year old is proof that it’s a bit above pre-schoolers’ heads and may be better suited for slightly. Someone commented on my previous post “It’s stupid to think that a tooth is going to make people feel like that”. Well, it’s not stupid because that actually is what my daughter thought. The message from that episode was that eating too much candy will make your teeth fall out. However, my 2 year old made the illogical connection that it was the tooth brushing that made Masha’s tooth fall out. No amount of trying to explain her fixed what she thought for weeks. That’s 2 year olds for you! Not stupid, just illogical and difficult to reason with as they haven’t developed certain skills yet.

I’ve watched a few episodes since and I can see how the storylines are interesting and appealing to children. The animation is really cute and attractive too. While Masha is a pest to the animals much of the time, they do clearly care for her. There is a sweet message there that we still love those we care for even if they irritate us at times. However, in one episode I saw Masha throw a pine cone at some animals who laughed at her. They get angry with her, but there is no instant message of “You shouldn’t throw something at someone who is mean to you” or how to properly deal with it. Masha also smiled when she knew she had done wrong. She’s not just mischievous, she is naughty.

There’s use of a hammer going on in another episode. Now, I know that a lot of cartoons show characters boarding windows up using a hammer. However, they don’t usually have children the same age doing it. Cartoon or not, children are too young to differentiate! Some children could potentially think that it would be okay for them to use tools unsupervised if they found one.

Masha and the Bear certainly isn’t the fluffy, light-hearted kind of programming I’m used to seeing for pre-schoolers. Although, that said, I can remember there being some quite dark storylines on Noddy back in the day! Yet, I never worried about our car being stopped and stolen in the woods. So that considered, it probably is best to take it with a pinch of salt as some children will be effected negatively by it and others won’t. I personally wouldn’t put it on for a preschooler due to the negative behaviour it sparked in mine. For me, I think my 5 year old daughter is only recently of an age where I’d be comfortable with her watching it again. She has a good sense of right and wrong and we would be able to properly discuss Masha’s behaviour now.

3 thoughts on “Revisiting Masha and the Bear”