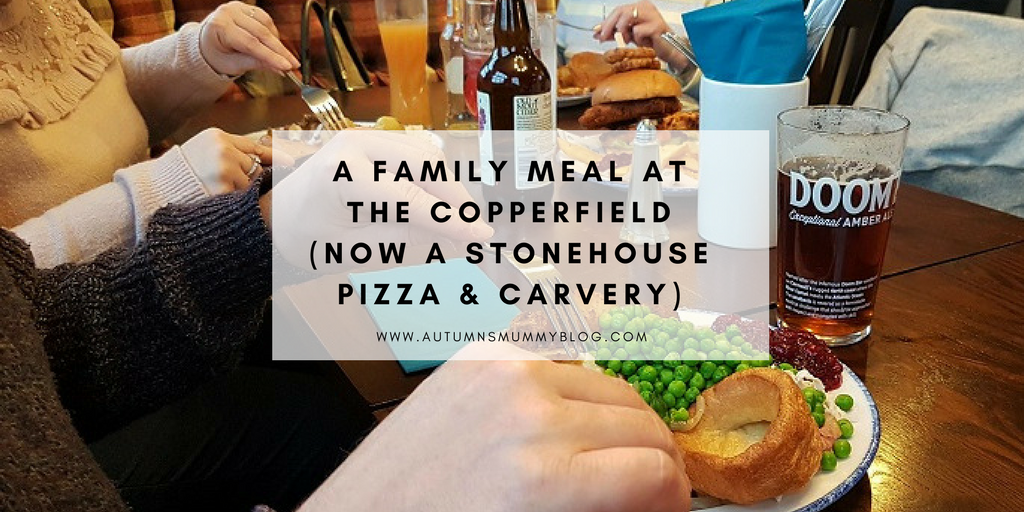 Like many locals, I was intrigued when I found out that The Copperfield was changing from a Crown Carveries to a Stonehouse Pizza & Carvery. With its great location on Gravesend Road in Shorne, it’s a perfect meeting place for families like ours who are spread between Gravesham and the Medway towns. As such, I have visited many times over the years. Recently, I was delighted to be invited to visit the newly refurbished restaurant to sample the menu and write a review.

I’ve driven past The Copperfield several times during and after the refurbishment. The new branding is very eye catching and the outside has been spruced up. On our visit on Sunday, we found that the inside had had quite the makeover too! There is a new colour scheme and rustic decor. 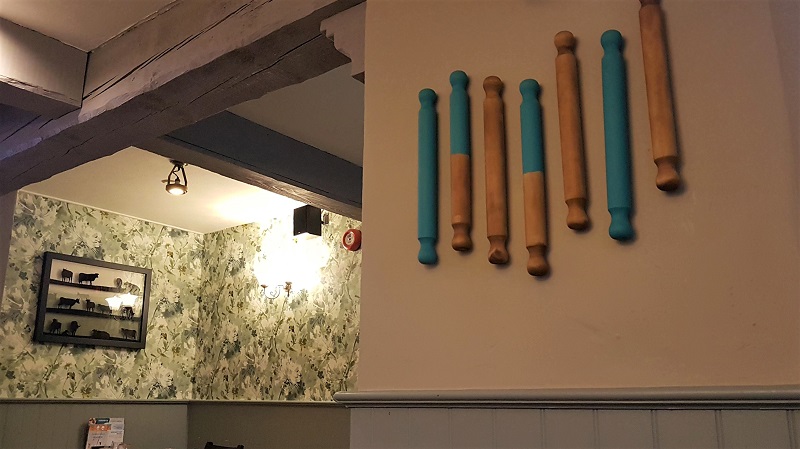 Around the carvery and pizza deck, there were neon signs. It’s certainly much more modern than it used to be. 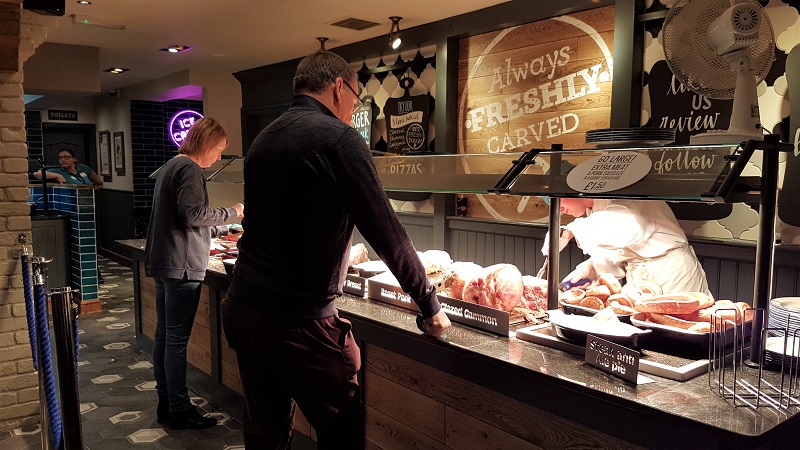 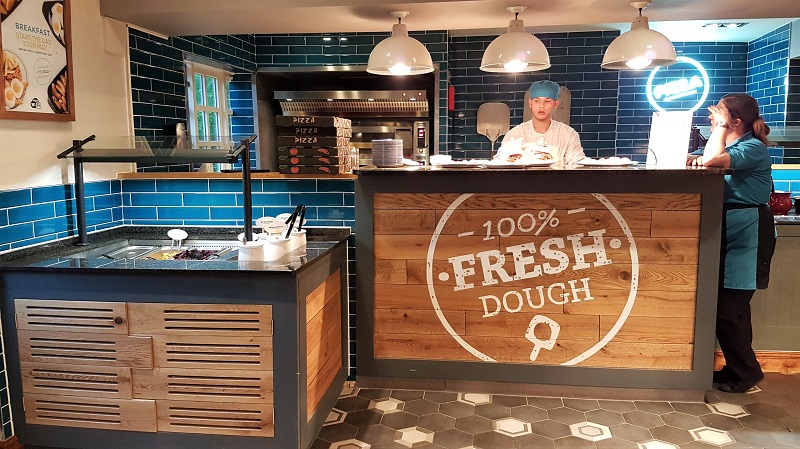 It was just after 5.30pm on a Sunday evening when we arrived, so it was one of their busiest times. Despite this, we were welcomed quickly and shown to the table that had been reserved for us. Staff were friendly and there was a very nice atmosphere.

We were a group of 7, spanning four generations. Just over half of us opted for a carvery (my Nan, parents and husband). You are given a ticket for the carvery, after which you can go down at any time to go and get your meal. You are asked whether you’d like a Yorkshire pudding, what meat you’d like and then you can choose from a variety of vegetables. My Dad found that the portion of meat was smaller than it used to be as a Crown carvery. However, if you go large for an extra £1.50, you can have extra meat, a pork sausage and a giant Yorkshire pudding. If you have a healthy appetite like him, that would be the best route to go down. He’s decided that’s what he’ll do next time. 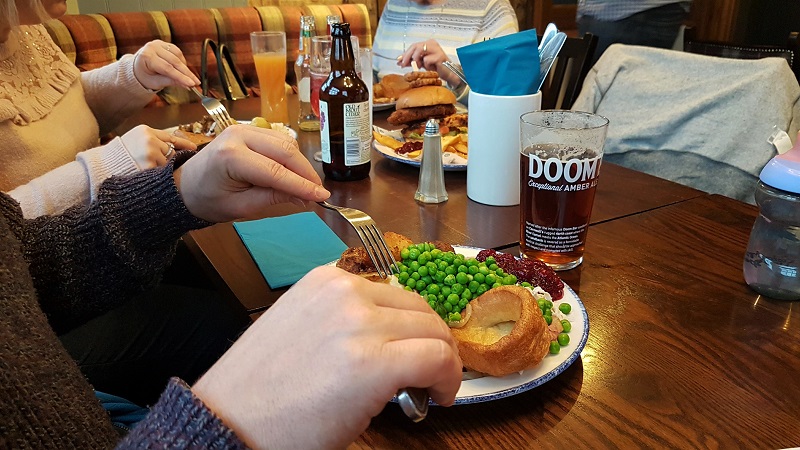 My parents and husband all agreed that the vegetables were nice and fresh. My husband’s only disappointment was that he loves white cabbage and there was none! The potatoes were ‘perfect’ according to my Mum, as they were lovely and fluffy on the middle and crispy on the outside. We all agreed that the carvery is reasonable value for money.

My brother and I decided to take advantage of the new pizza and burger menu. We were given a buzzer which went off when we could go down to the pizza deck and collect our food. My margherita pizza was delicious and I loved that it had had lots of herbs sprinkled over it. It was so large that I took the rest home in a box and it covered my lunch the next day! 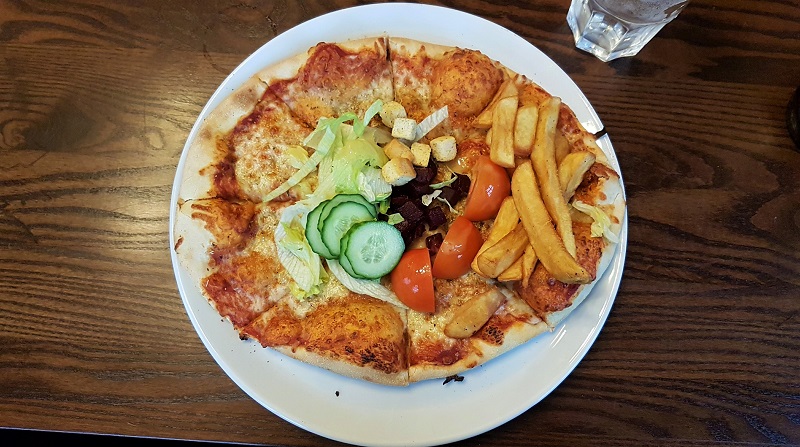 My brother had The Hen Party burger. Usually, when you see pictures of a burger on a menu in a restaurant they look amazing and then you’re disappointed when they arrive. However, this monster of a burger lived up to its photo and description. Apparently it was very tasty – if a little hard to get your jaws around! 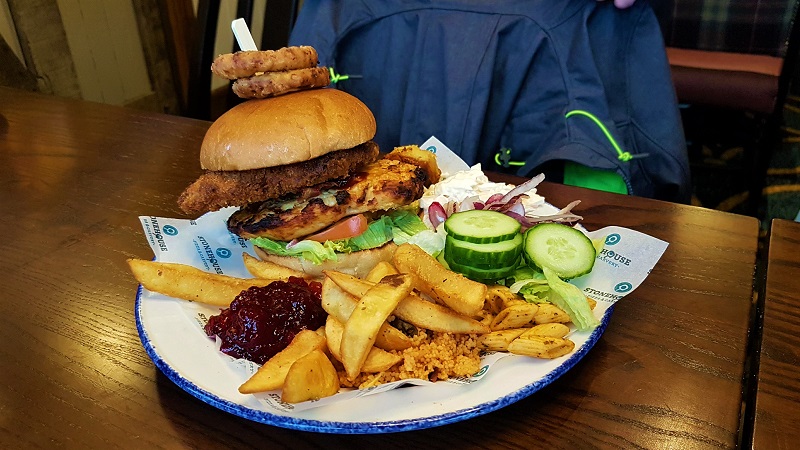 When you go down to the pizza deck, you can add chips from the carvery which are just as perfect as the potatoes. There is also a small salad bar where you can add salad, croutons and sauce to your plate. It was quite a small selection, but I wasn’t disappointed by it. To be honest, they couldn’t really add any more as there simply wouldn’t be the space! Seats and tables have already been lost in that area to make way for it. 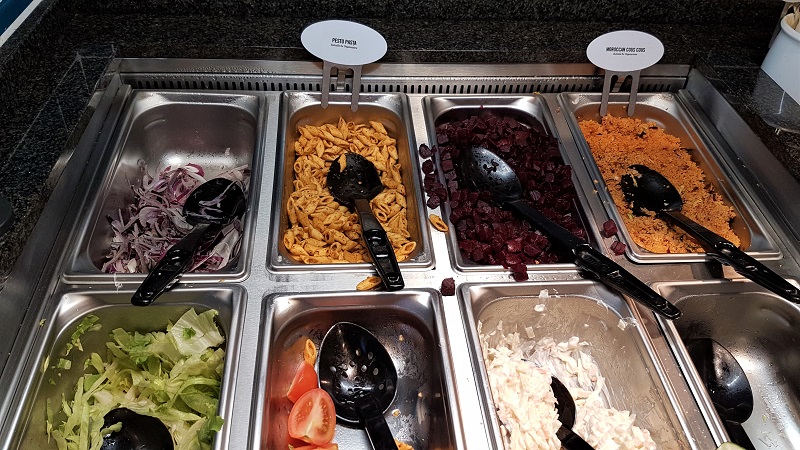 The choice of meals for children was brilliant! In fact, I think all the menus have improved. I was impressed to see that there were meals for under 5’s offered. Usually, we order a children’s meal for Autumn. However, as they’re for children up to the age of 10 in most places, they’re always huge! As such, was great that there were a couple of options for younger children. Unfortunately there were no meatballs, so we ordered her the tomato penne pasta. She was smiling lots and saying ‘yum, yum!’ so I think she enjoyed it! 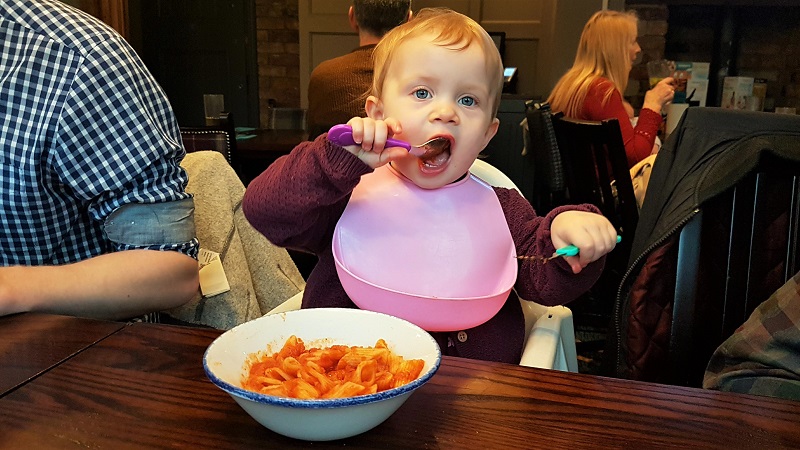 As a sweet tooth, the dessert menu got my eyes almost popping out of my head. There was a very good choice, some quite unusual. We were made aware that a couple of options had run out, which you can’t really be too surprised about at 7pm on a Sunday evening. Unfortunately, the ice cream machine was one of the options that was unavailable.

My brother and I chose Chocolate Malt Ball Crunch Pie. Unfortunately, for us at least, it didn’t live up to how amazing it sounded on the menu. 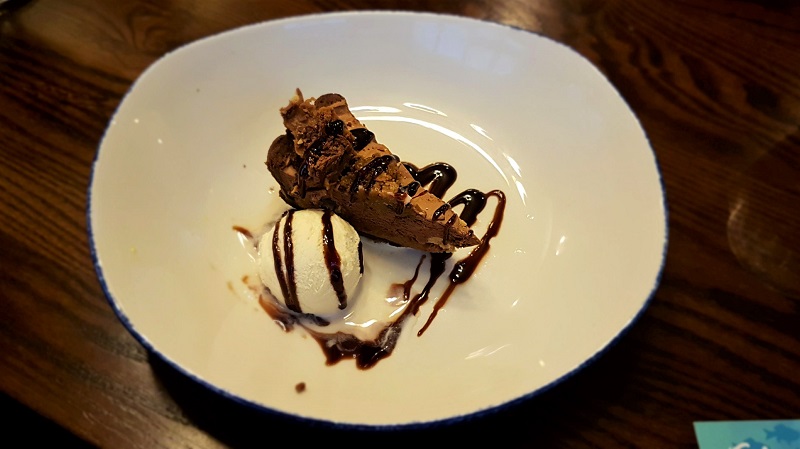 My Mum chose a home baked lemon sponge. She enjoyed it, although it was a bit dry despite the custard. 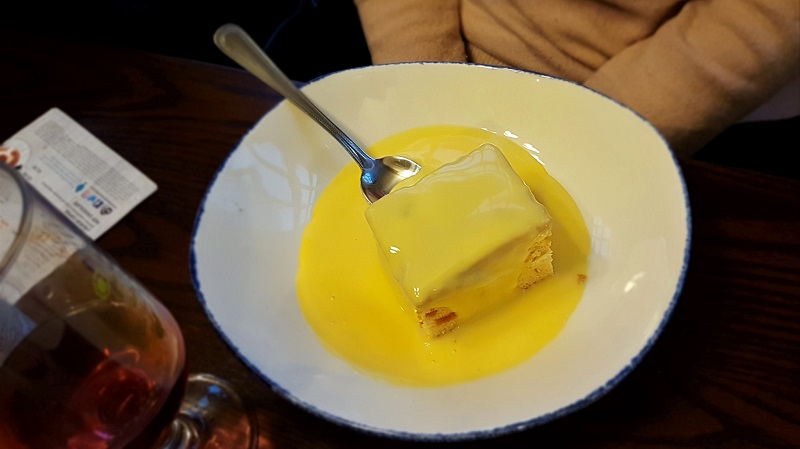 Meanwhile, my Dad had a rocky road sundae. He thought it was nice, although it only just met the description on the menu as there were only two chocolate brownie cubes in it! He also thought it could have done with a bit more chocolate sauce. 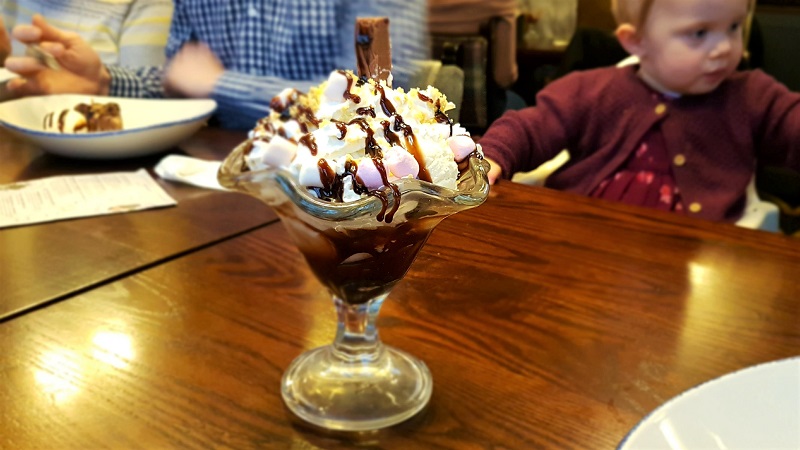 Still, Autumn and my husband both enjoyed their desserts without any qualms. My husband had a black cherry cheesecake, which he said had a good firm biscuit base and a good flavour. Autumn enjoyed some of the whipped cream that came with it too! 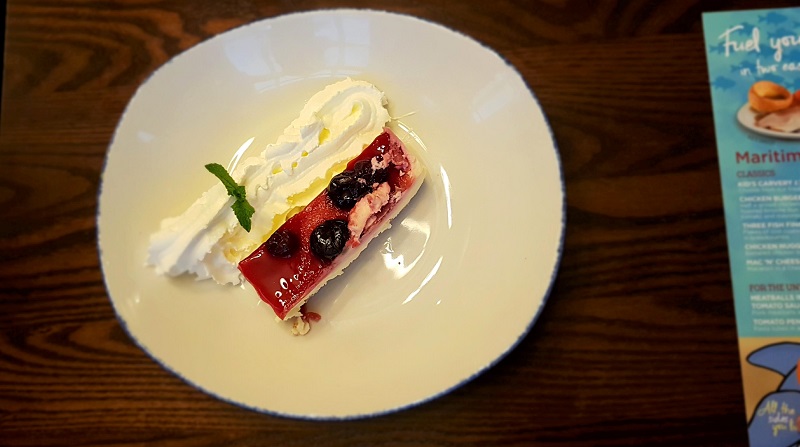 A few minutes later, her dessert arrived. She had custard with a smiley face and chocolate buttons. 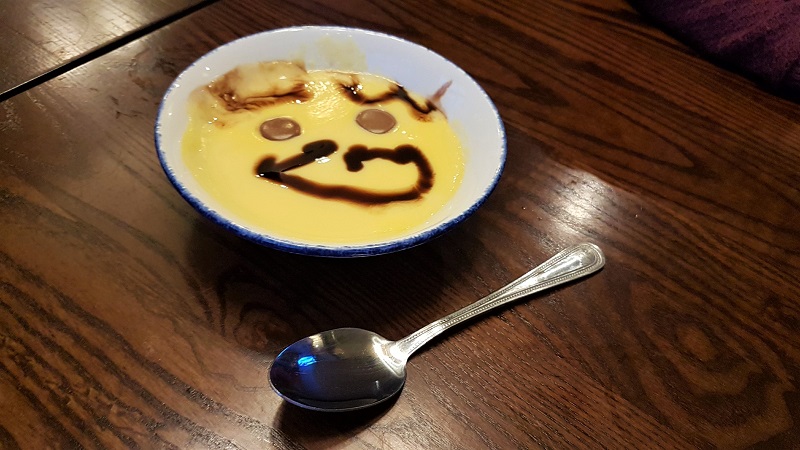 We didn’t sample many drinks, but my Mum and I thought the selection of cocktails looked very nice. My Dad was also very pleased to see that one of his favourite beers, Doombar, was on tap. Autumn tried to share it with him, reaching out for the glass! Meanwhile, there was a good selection of cider too, which my Mum and husband took advantage of. 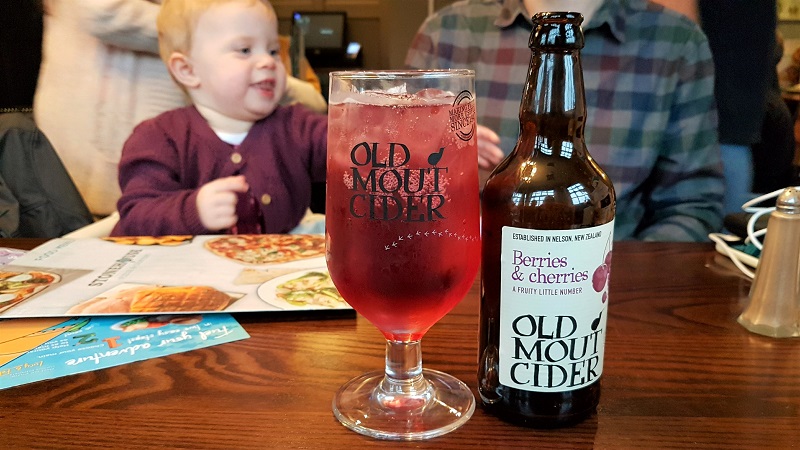 We thought that the staff were very friendly and attentive and we enjoyed our food. We all thought that the menu had improved and that the selection was good for spanning across generations and catering for fussy eaters. Despite the fact it was very busy, there was a good atmosphere and nothing seemed to take that long. However, Autumn’s main and dessert both took longer to be ready than ours. This led to her getting upset and we had to share some of our food with her and think of inventive ways to entertain her. It would have been good if they were ready at the same time, or if they had the forethought to make sure a child’s food was ready first to avoid upset. 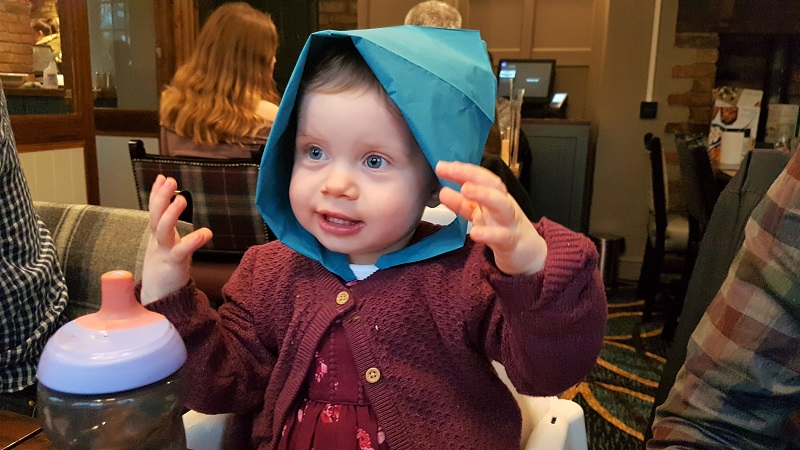 In the past when we’ve visited, things have been a little dirty and the tables have been sticky. However, despite it being a busy time, everything was very clean. We all had a great evening and I left with a big smile on my face. My Mum is keen to go back to try a burger and I’d also like to sample some other things on the menu. Based on our experience during this visit, we thought it was an improvement on The Copperfield before the refurbishment and will definitely be returning. 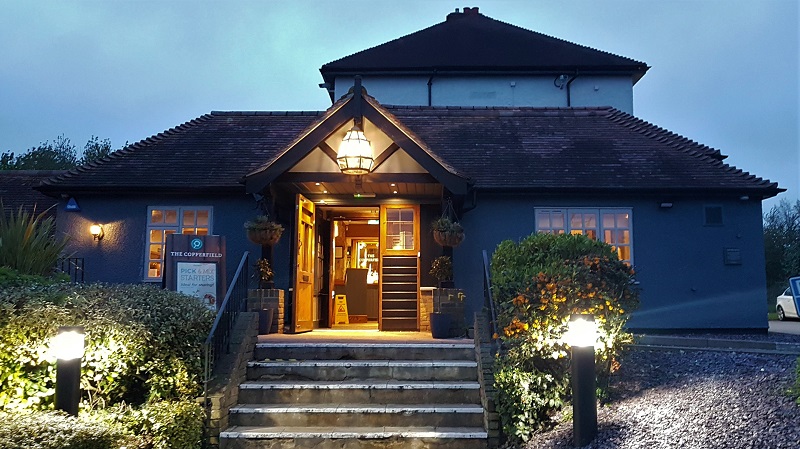 Disclosure: I was invited to sample The Copperfield’s new menu and received a voucher to cover the costs of part of the meal in exchange for this review. As always, all views are honest and my own and this feedback has been passed to the team at The Copperfield.