A few weeks ago, one of my best friends went to Bluewater and saw the following advert for black pantyliners in a changing room: 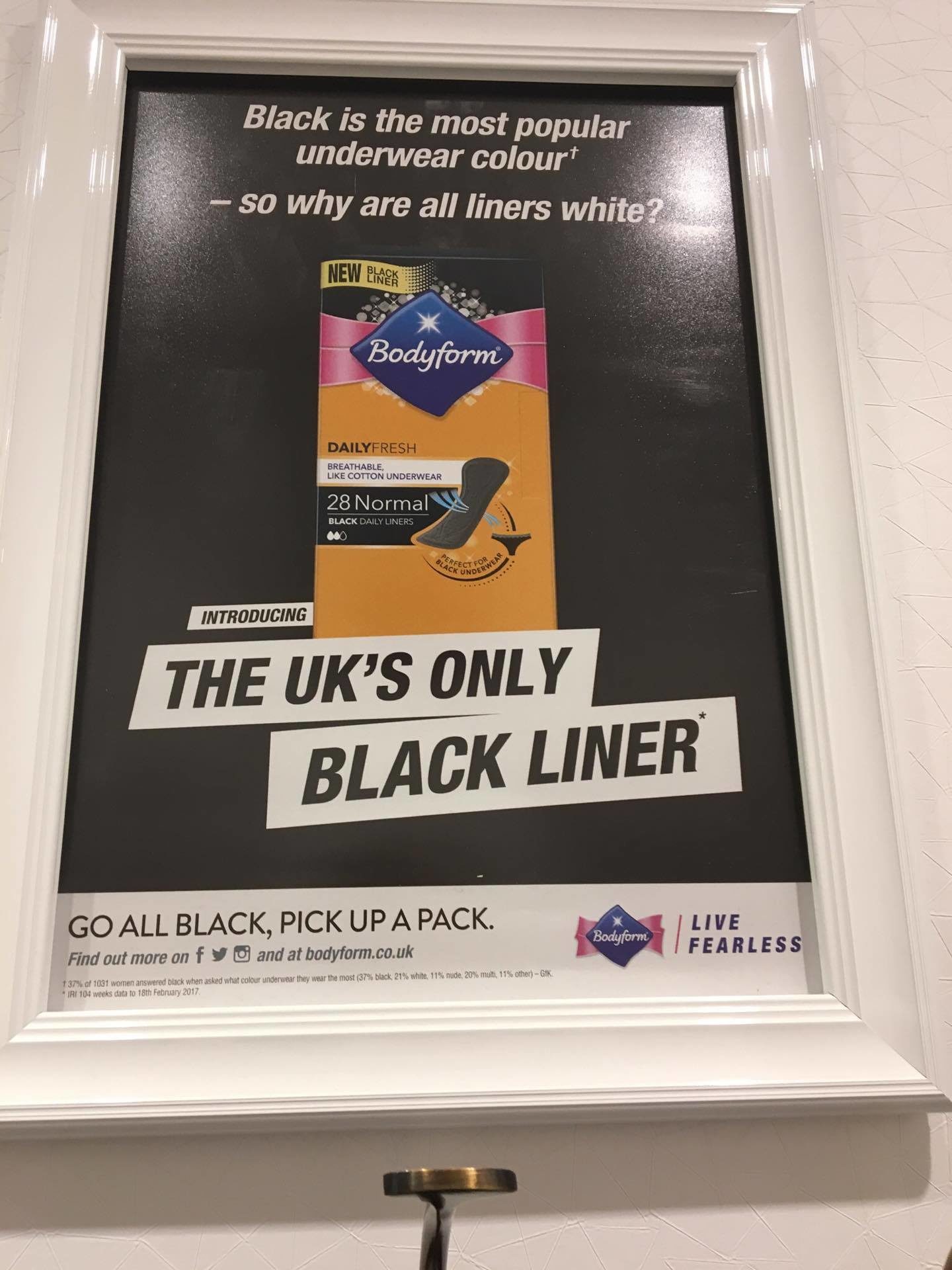 She took a photo of it and sent it to our Facebook messenger group. A whole conversation ensued. Why were Bodyform making black liners? It almost seemed like it was something that could be an April fool. However, it is actually a real product!

As someone with an inquisitive nature, I just had to try them.

Is there any point?

Okay, I’ll be blunt. The first thing my friends and I thought was “What on earth is the point of that?” We just couldn’t think of a situation where it would be…necessary. It’s only us who sees our pantyliner and even if our husbands did see it, he’d know what to expect anyway. However, I can understand that if it’s not a long term relationship in question, you may not feel so comfortable. If you’re wearing a pretty pair of black lacy knickers, I guess it isn’t the sexiest thing to undress and have a bright white liner flashing through the gaps in the lace!

Another thing that my friends and I discussed was that we all use pantyliners when a period is due. It saves both our underwear and ourselves from potential embarrassment should we be caught unaware! White ones show EVERYTHING, but with a black pantyliner would you be able to actually see if you’d started? As gross as it sounds in discussion, every female has discharge. It’s a healthy fact of life. However, would a black pantyliner allow you to check that what’s coming out is healthy? Well, I’m taking one for the team and finding out for you! 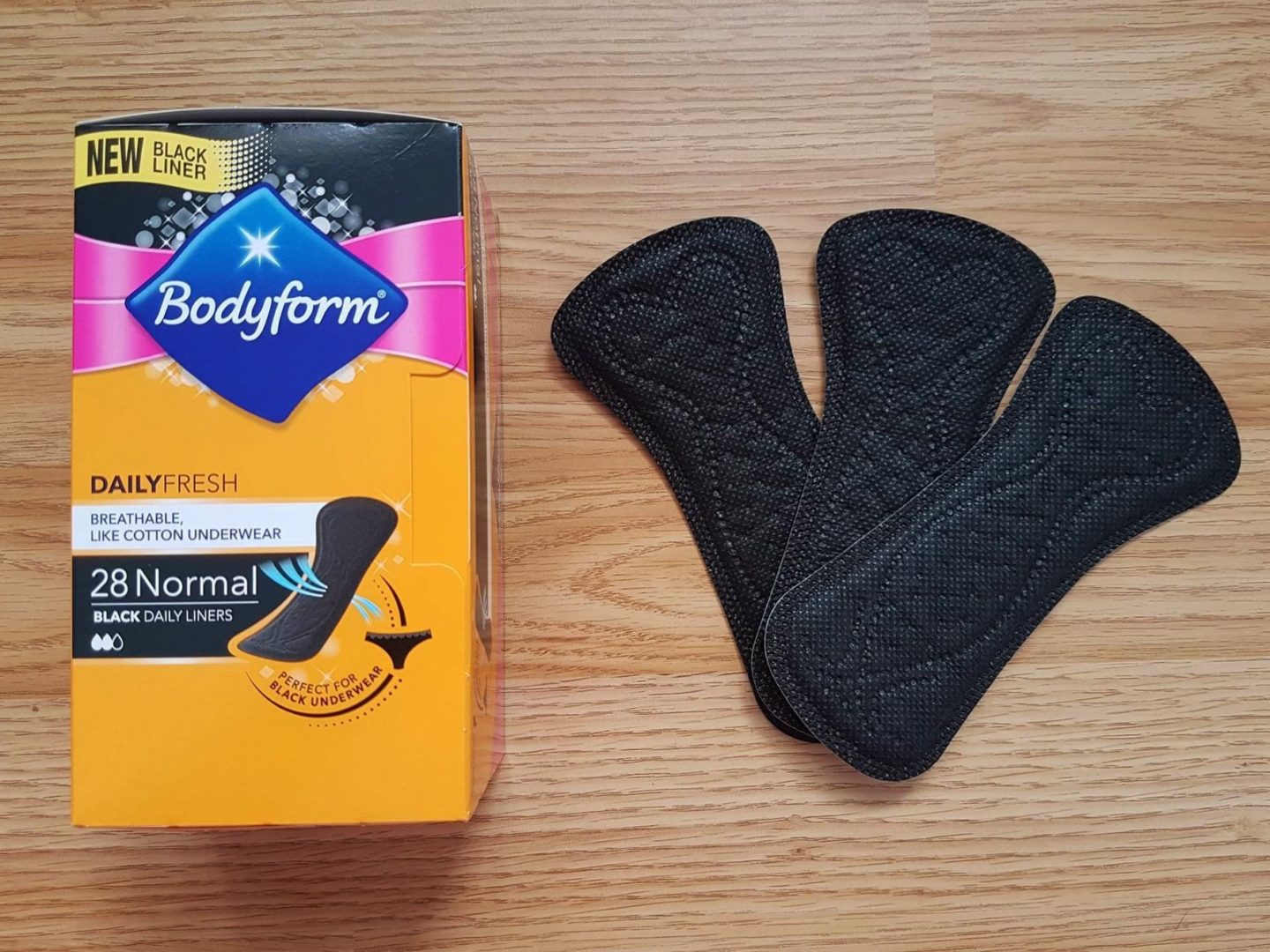 So, what is the point?

Well, the obvious one is colour matching! Apparently, black is the most commonly worn colour of underwear. Therefore, it does kind of make sense that you might want your pantyliner to match. After all, when you’re sitting on the loo and you look down, a white pantyliner does kind of glare at you if you’re wearing black knickers.

Just imagine if Bodyform brought out a whole rainbow of colours to match all of your underwear, though!

When I take Autumn swimming, everyone in the class gets changed in the same room. Even though you’re obviously not staring at other people and what they’re doing, you do see other women in a state of undress. The fact that I’m in front of other women in my underwear means that I always make sure I wear a decent pair of knickers. However, if my underwear has a pantyliner in it, for some reason I do feel concerned in case anyone looks across and sees. These black pantyliners offer a lot more discretion in these kinds of situations, as they’re a lot less noticeable in black knickers. 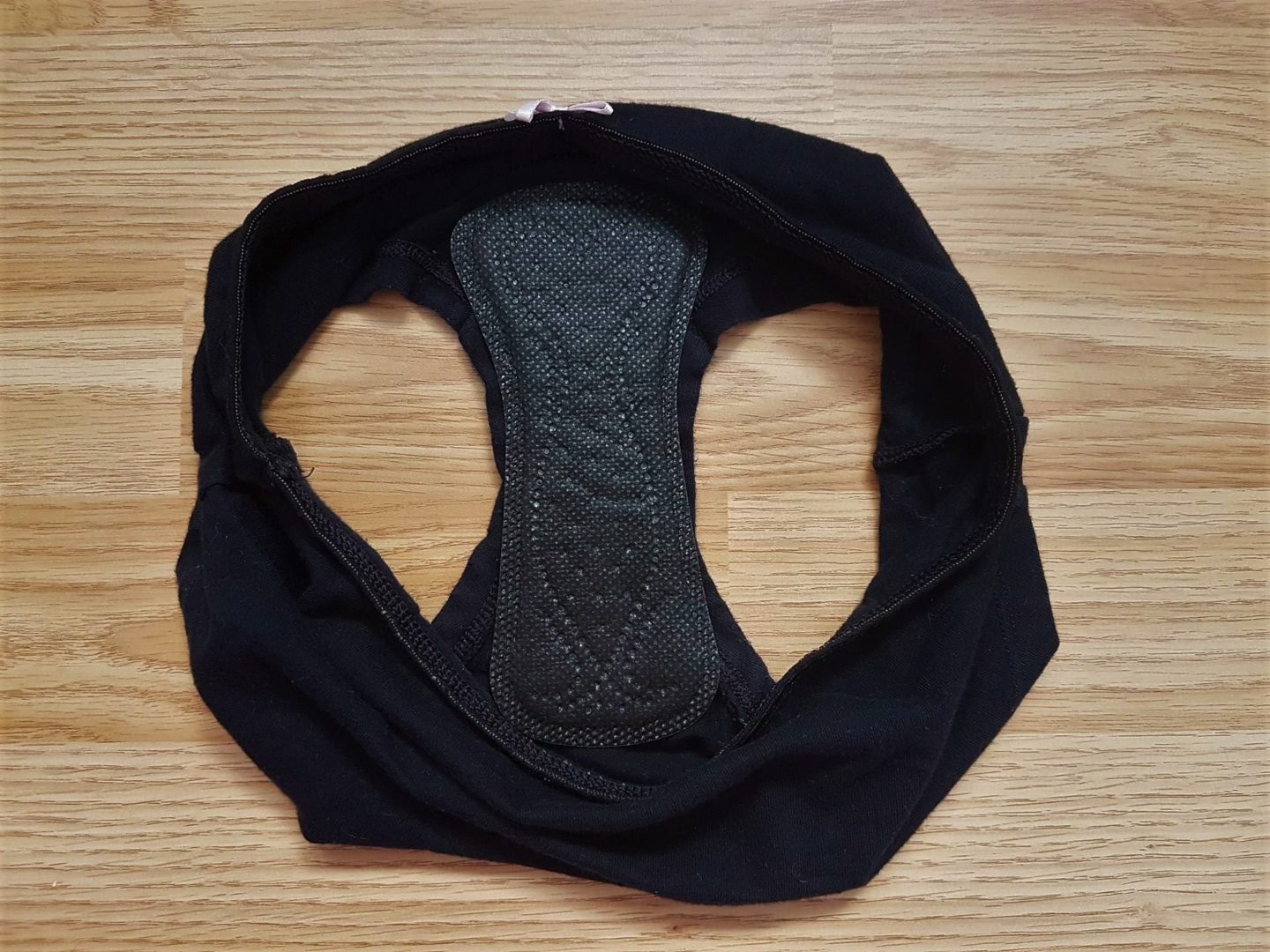 As well as that, I remember worrying at school whether my pad/pantyliner might slip out during a P.E. lesson. Whilst the situation isn’t avoided, these pantyliners are shaped to make them more secure. Also, if you’re wearing a black leotard for gymnastics or dance and it slightly slips, it’s going to be far less noticeable than a white one trying to make an exit! I think these would be fantastic for dancers and for wearing with black leggings.

What did I think?

I found them comfortable to wear and not too thick. Due to the colour, I couldn’t actually see anything on them when I used them. As long as you use toilet roll when you use the toilet like a civilised human being, I don’t think this should be too much of an issue though. Just check out your period situation when you have a wee 🙂 On a final note, I actually did enjoy the fact that these liners matched my underwear and the extra discretion that gives!

Disclosure: I received 3 boxes of Bodyform black pantyliners for the purpose of this review. As always, all views and opinions are honest and my own.

Increase Your Odds on Winning by Hiring a Criminal Lawyer

Does America do enough for its veterans?