Last Friday, we went to check out Dinotropolis Adventure Park which opened at Bluewater last month. Autumn loved dinosaurs, so as soon as I heard about it I thought she’d enjoy it. In fact, the night before, we’d had dinner at neighbouring Rosa’s Thai Cafe and she’d been excitedly shouting “DINOSAUR!” at the advert on the wall! As we headed to our booking at 2pm, we were looking forward to some lunch and dinosaur themed fun.

Dinotropolis is located in what used to be the ‘Glow’ area of Bluewater and is situated at the back between Rosa’s Thai Cafe and Showcase Cinemas. When we arrived at Dinotropolis, the staff all seemed very friendly and helpful. I was pleasantly surprised that there was a pushchair park. This area is staffed at all times, so you can feel quite comfortable leaving them there along with any coats.

As soon as we entered, Autumn heard one of the animatronic dinosaurs roaring. She clung to me with her arms wrapped around my neck, saying “Mummy, I’m scared”. My Mum and I soon managed to reassure her about them – and by the end of our visit she was quite happily walking up to them. 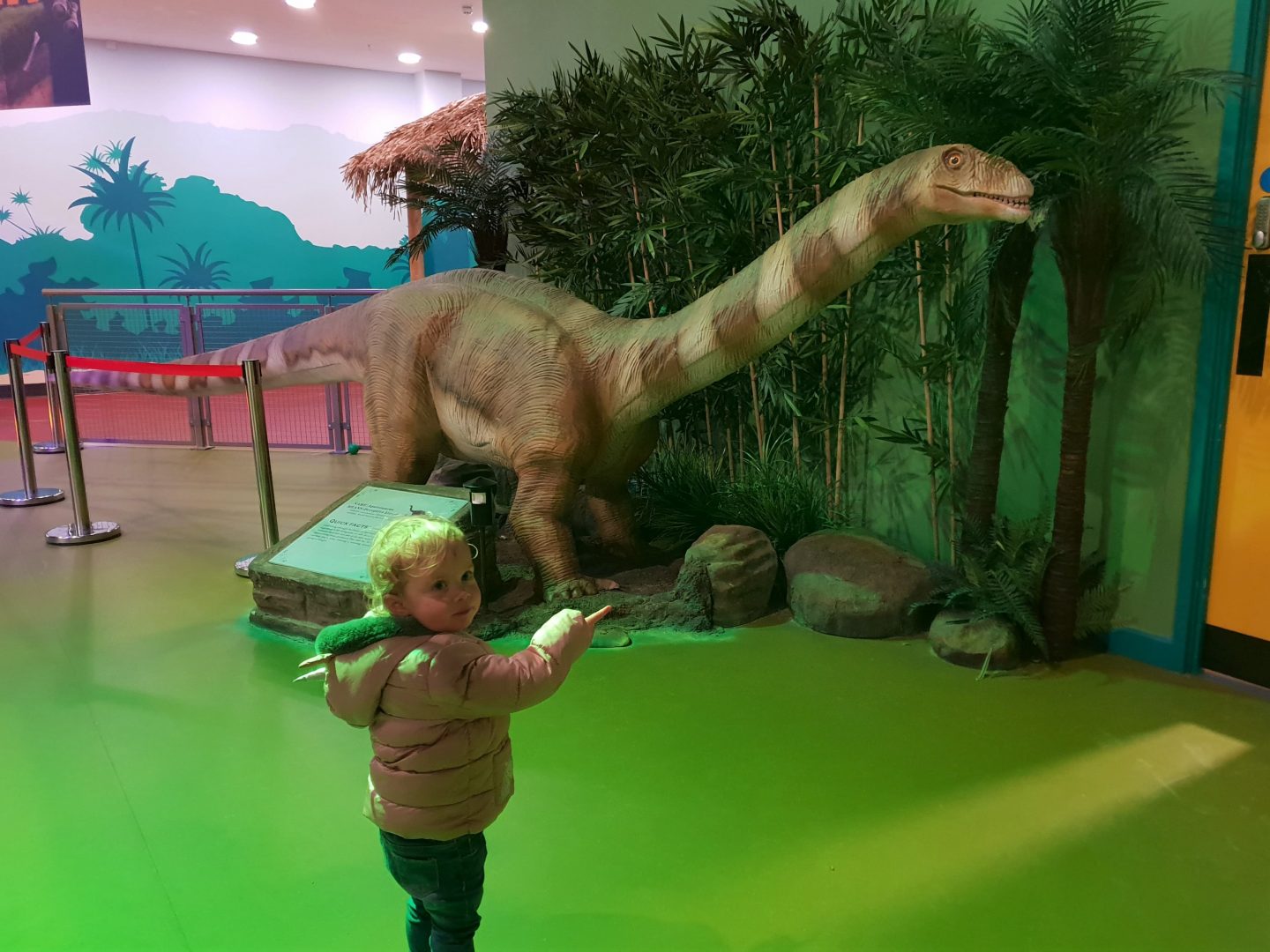 They were brilliantly realistic looking and it was fascinating to watch them move. Each of the dinosaurs also had facts about their species next to them. 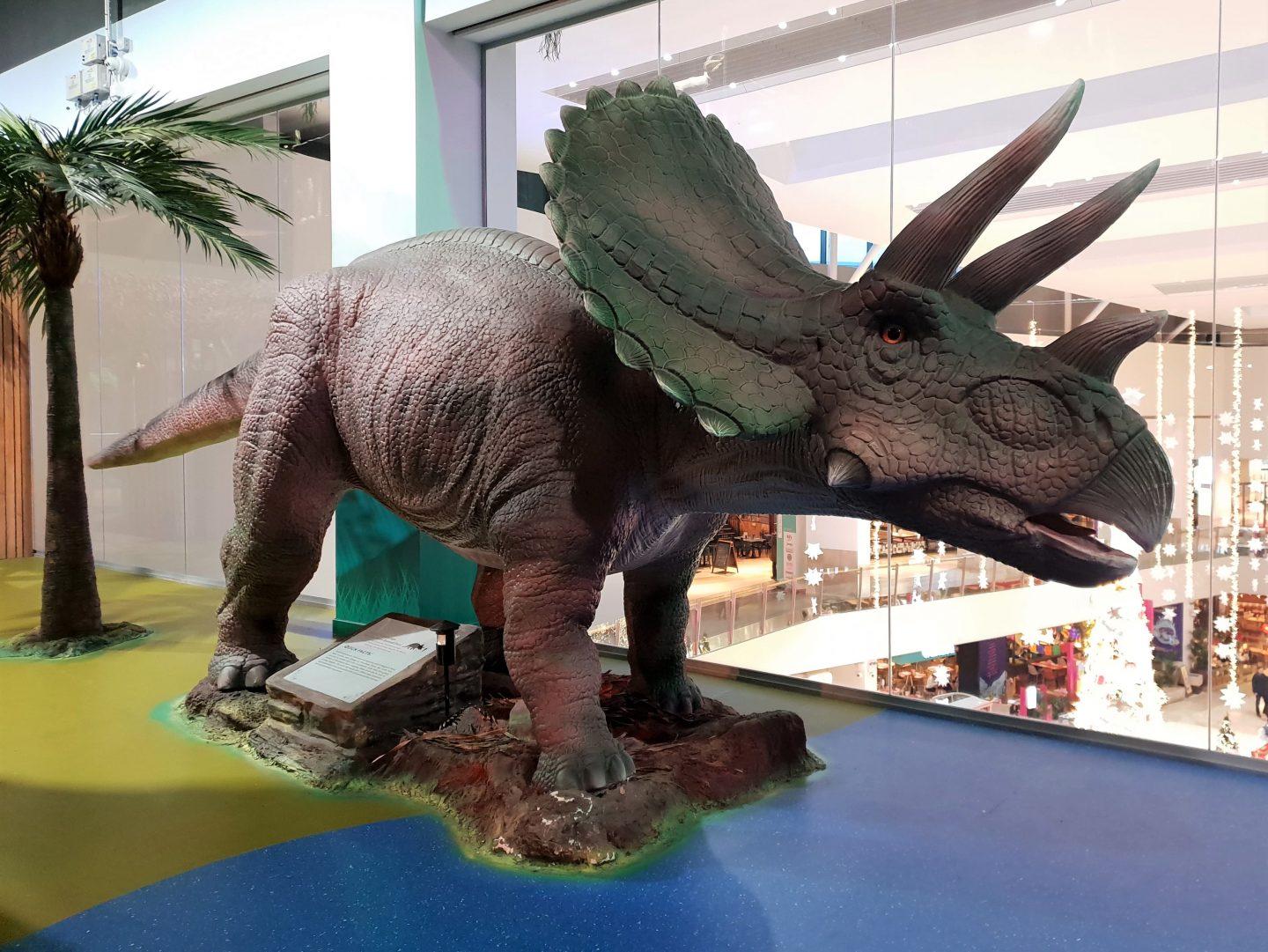 Discovery cove was my favourite part, and what sets Dinotropolis apart from other local soft play centres. There is a sand pit where you can uncover fossils. 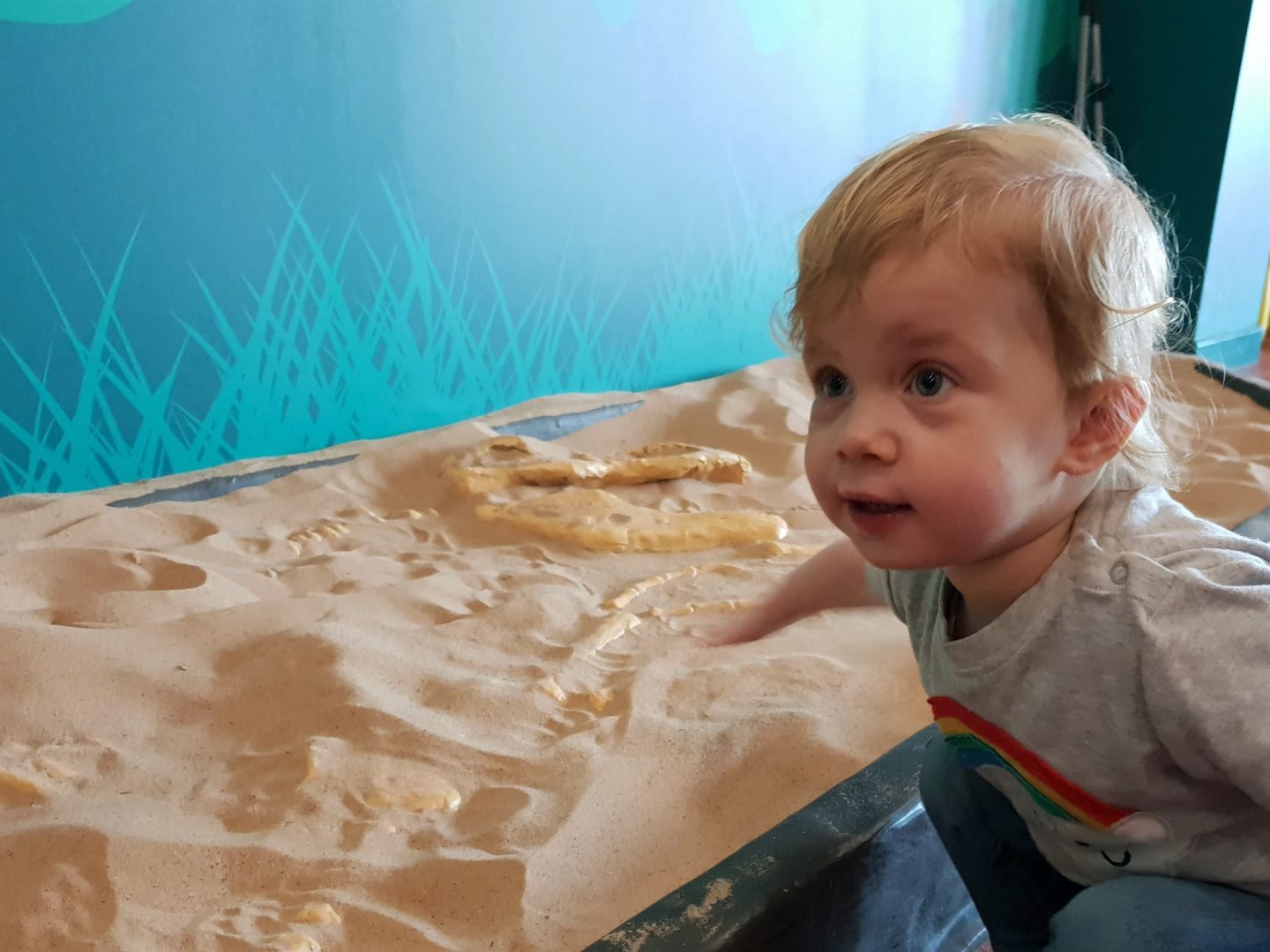 There is also a raised sand table that has dinosaurs and trees projected onto it. The dinosaurs walk around and it looks amazing. Autumn kept trying to throw sand at them – and I’m not sure whether she thought they were real! The most impressive part of it was that if you dug into the sand, the light project a colour change onto it. It went from normal coloured sand to pink and then blue as you dug deeper. It was fascinating and I couldn’t quite work out how it worked.

However, my most favourite part of Dinotropolis as a whole was where you can create your own dinosaurs. In a lovely area flooded by natural light, there are round tables with colouring pencils and pens in the centre. Around the tables are sheets of paper with various types of dinosaurs on them. Both Autumn and I had great fun choosing a dinosaur and colouring them in!

Once you’re done, if you put your picture into a shelf in the wall, it springs into life in a tropical virtual world with other people’s creations for a limited amount of time. I was absolutely amazed by this. You write your name on the sheet and this also pops up above your little dinosaur! 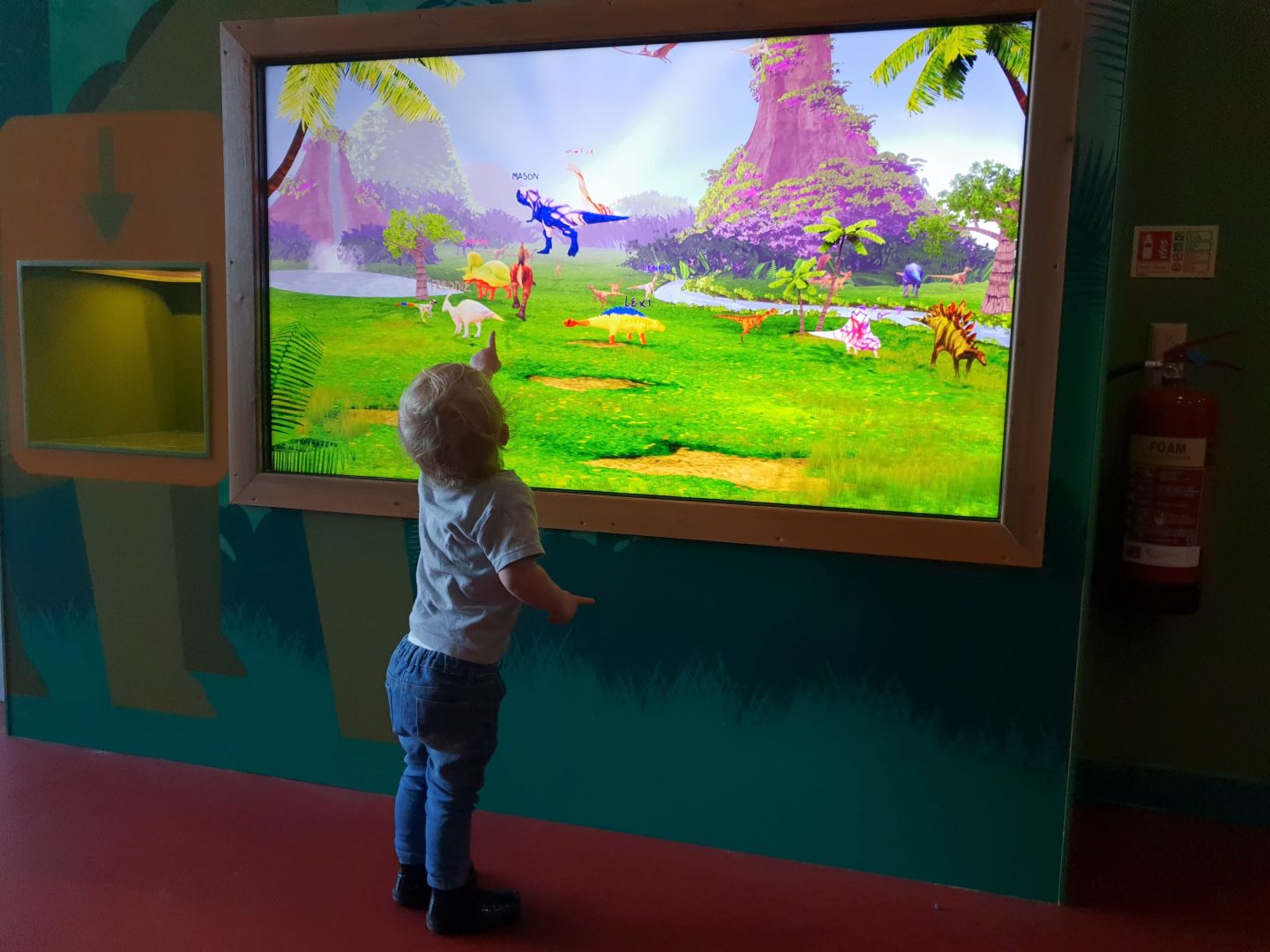 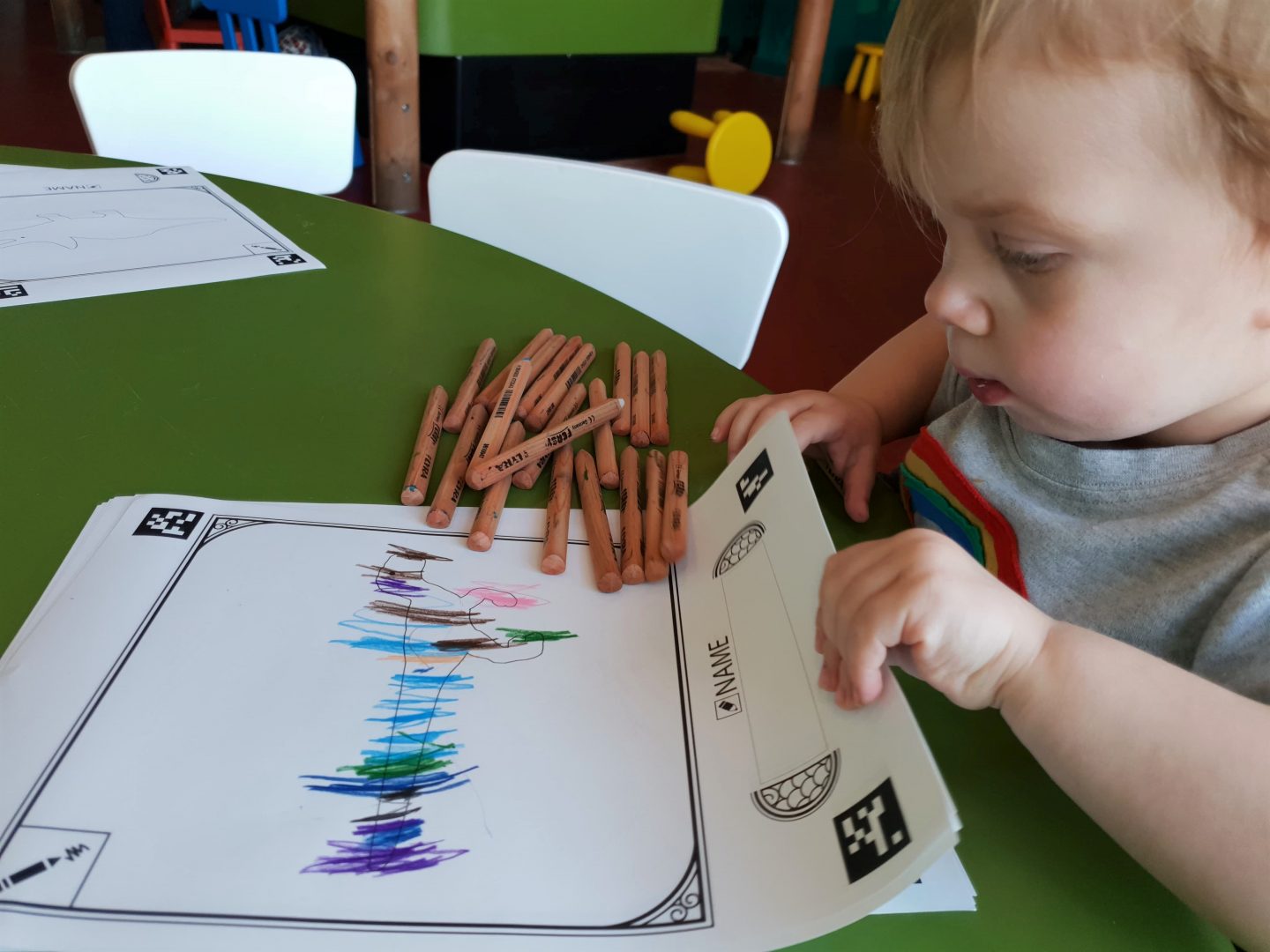 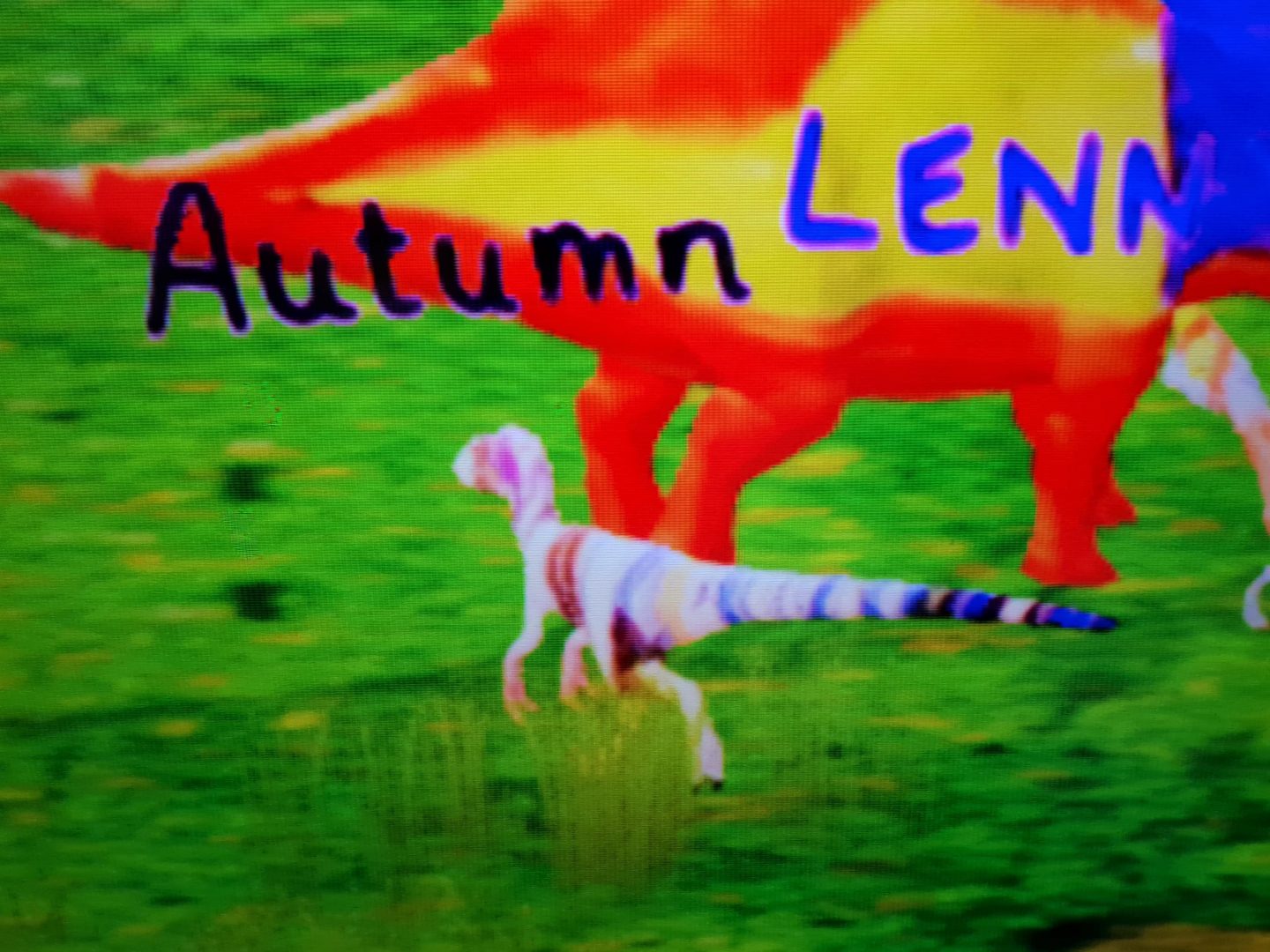 The soft play area is the main part of Dinotropolis. There’s a large area for older children which is high up and looks great fun! However, for toddlers the play area is quite small and basic. It consists of some soft padded shapes, a couple of large dinosaur velcro puzzles, a ball pool and two small slides.

Despite the lack of things to interest her, Autumn loved the ball pool and slide and spent ages playing there! 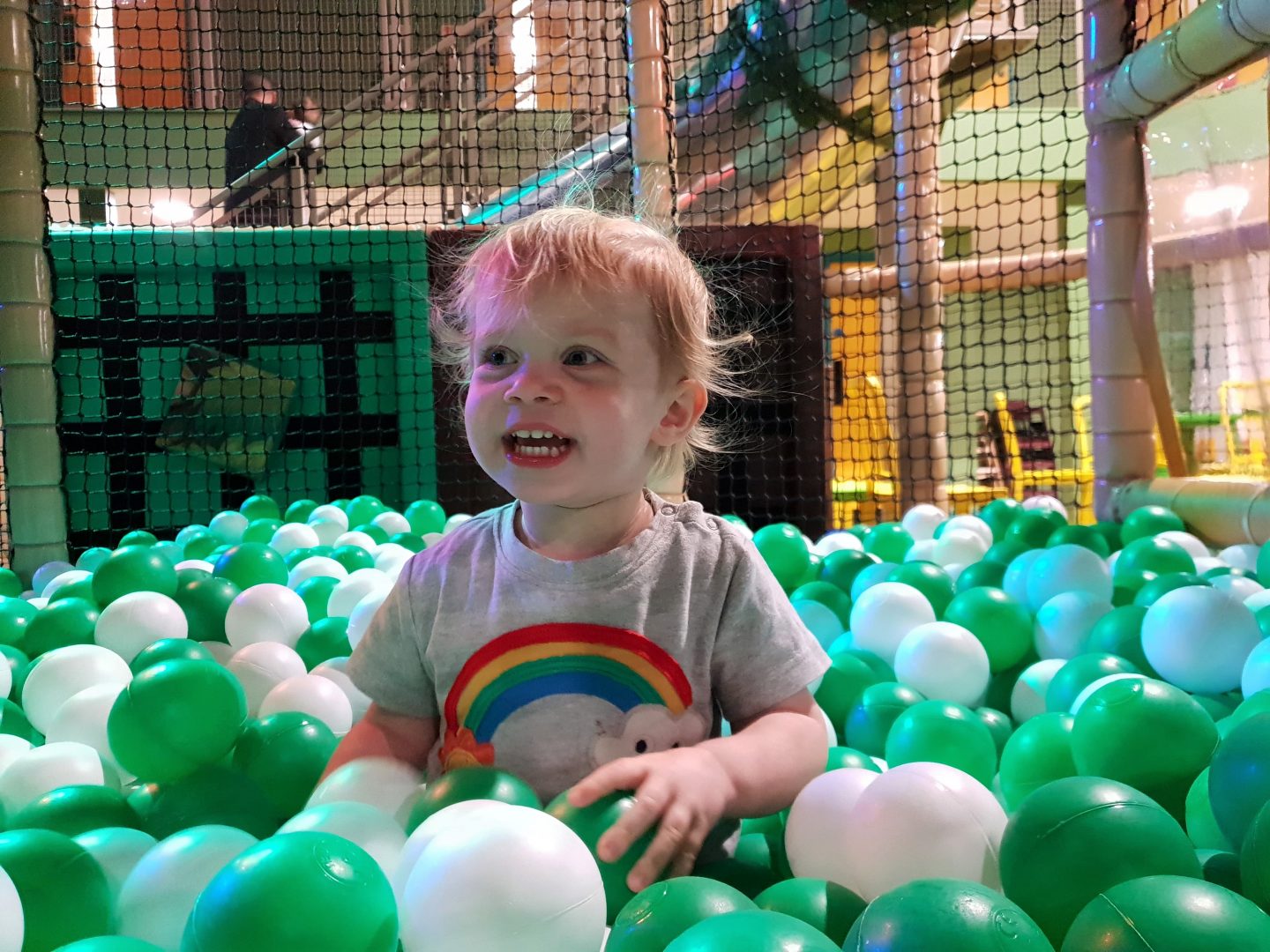 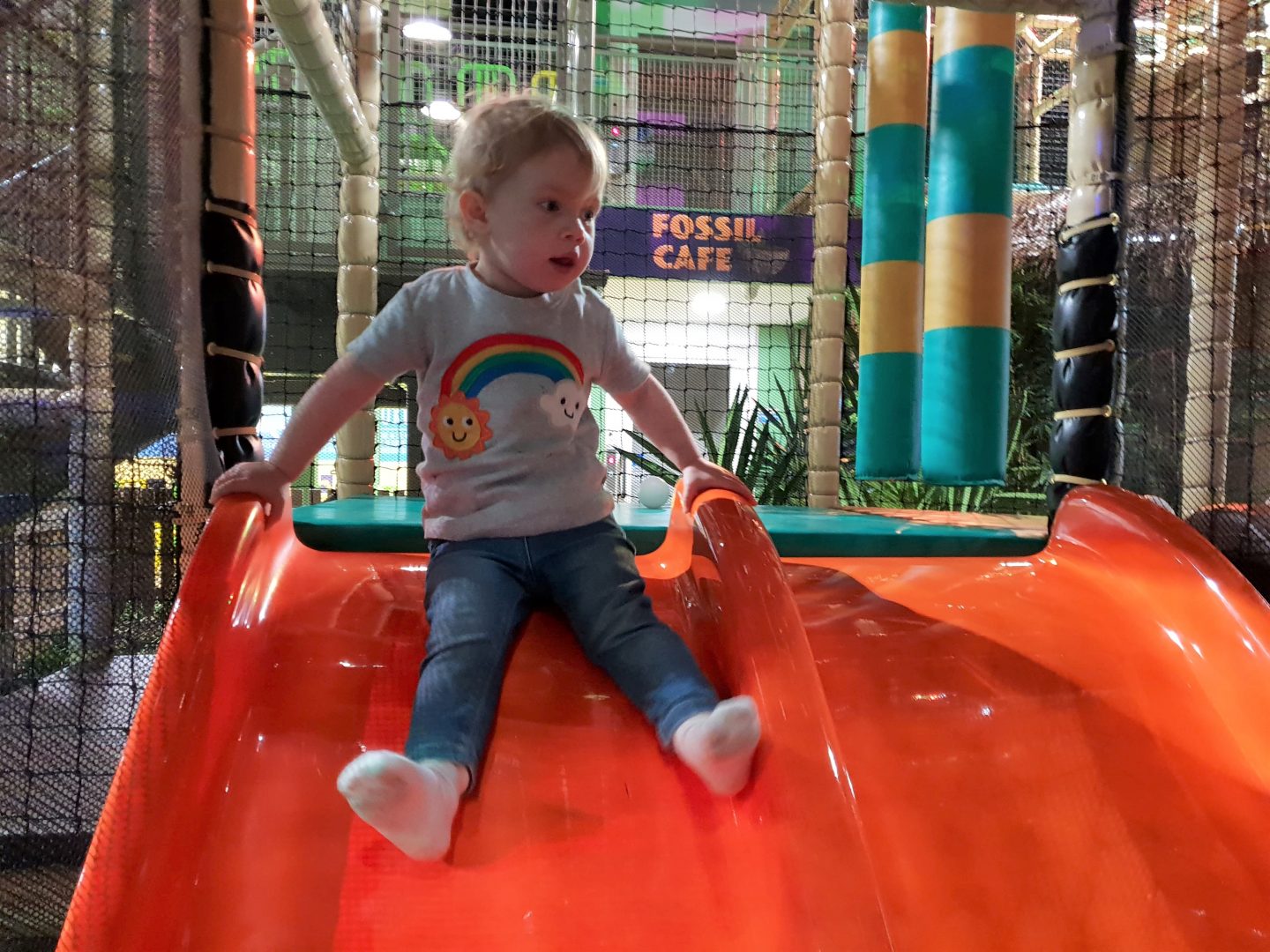 If you have older children, there is also Raptor Run where you can race around a track on go-karts. I can’t lie, I really wanted to join in with that. You can also pay extra for Dino Escape for older children, which is a dinosaur themed escape room where you are avoiding lasers and booby traps against the clock.

We were really hungry as we hadn’t eaten lunch, so we decided to eat at the Fossil Café for convenience. When we’d entered, we were given yellow tickets for the cafe but not told what they were actually for. As we sat in the cafe, it became apparent that nobody knew what they were for as everyone was asking the cafe staff! It transpired that you could claim a cup of tea or bottle of water for your ticket.

Our overall experience of the café wasn’t too great, unfortunately. Large parts of the menu were off limits as they had run out of tomatoes, lettuce and most other vegetables! The staff were very polite and apologetic, though. I expect teething problems when somewhere is new. However, Dinotropolis has been open for almost a month now and it was a school day, so it wasn’t like it was really busy. My Mum and I didn’t really enjoy the food we did have from the limited choice and the ingredients tasted quite cheap. Autumn seemed to enjoy her fish fingers, chips and beans though! 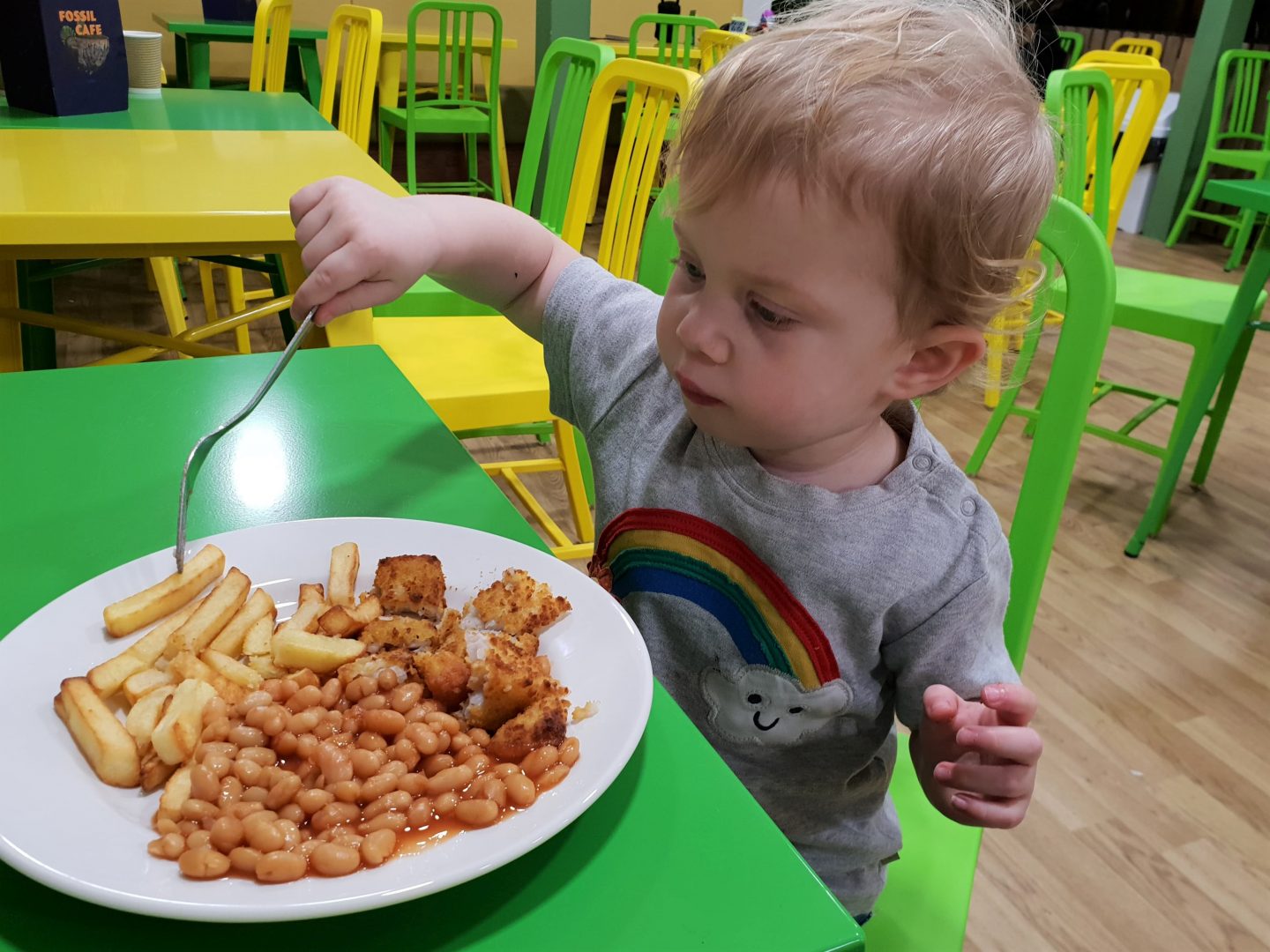 However, in the future I would definitely choose to eat elsewhere at Bluewater. You can eat far nicer things for the amount of money you spent in Fossil Café. If you just wanted a cup of tea and a snack, it would be okay though.

The other thing that frustrated me, was that I found out that are allowed an hour and a half at Dinotropolis. I hadn’t been informed of this. As such, I don’t know if I was allowed as much time as I wanted for the purpose of this review. Alternatively, perhaps the staff were just relaxed about it as it was quite quiet. However, if you consider the amount of time it takes children to eat, it seems very unfair that your entry time includes time in the café.

Considering that you’re paying at least £12 for a a child of over 18months, depending on whether you pay for food or other extras, they could be better about this. £12 seems pretty steep to me for an hour and a half. Of course, with children you’re likely to lose some of that time eating or in the toilets! However, Dinotropolis also costs £5 for adult entry too. I don’t really understand why, as it is really soft play with a few extras and I’ve never had to pay for soft play entry anywhere else.

Yet another thing to add insult to injury is that depending on ticket type, children from 19 months up to 18 years of age cost between £12 and £20. As I’ve already discussed, there were a lot of things Autumn was too young to be able to join in with. It would make more sense if the price changed depending on the age of your child, as it seems unfair paying a full ticket price when your child is unable to take part in half the activities.

I thought that the concept of Dinotropolis is great. I loved the part where we created our own dinosaurs, however that isn’t enough to give me an overall good opinion when cost and food is taken into consideration! If the pricing was fairer, time in the café was considered separately and the food was better then my opinion would have been very good. A bit more for toddlers to do would have been good too.

There is definite room for improvement. However, I’m hoping that my comments and others will be taken on board as we did have fun and I do love the idea of Dinotropolis.

Want to visit Dinotropolis? Walk-ins may be available, but to avoid disappointment, you can book on their website.

Disclosure: My Mum, Autumn and I were given complimentary entry to Dinotropolis for the purpose of this review. As always, all views and opinions are honest and my own.

Preparing a short break to Devon

Review: Jaques of London toys and board games