On Saturday (9th September), Dave and I decided we’d visit Dover Castle with Autumn. Birds of prey, particularly owls, are one of my many interests. As such, I really wanted to go and watch their historic falconry displays. Whilst I’ve watched several displays before, this one is different as it looks at the historic elements of falconry. In this case, the focus was Tudor falconry.

When we arrived, Raphael Historic Falconry were part way through their second display of the day and there was a good sized crowd. My first impression was that there’s really something extra special about watching these majestic birds soaring around in such beautiful, historic surroundings. 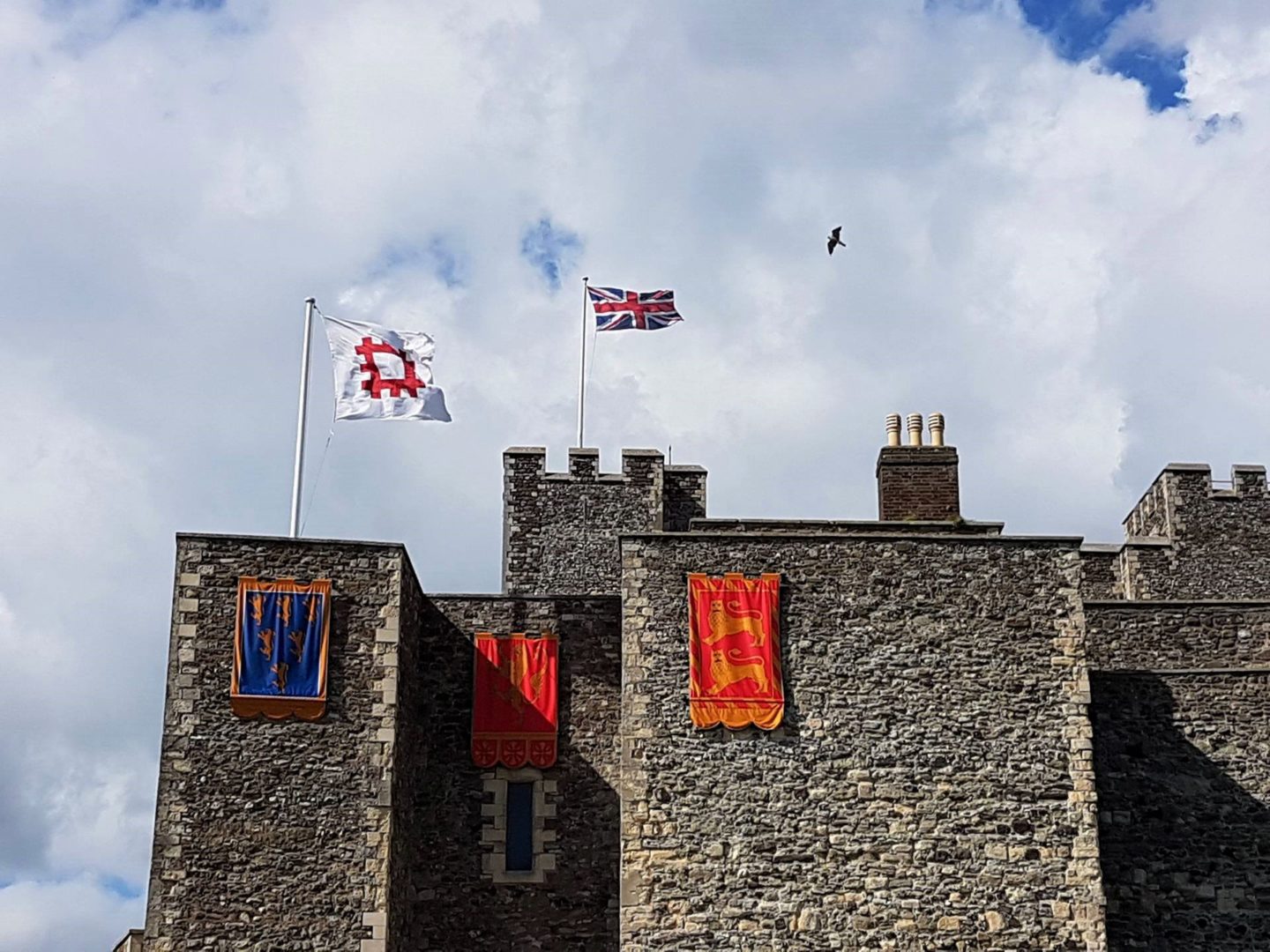 It was great to learn a little about saker falcons as I don’t believe I’ve seen one before. We got to see Cilla (the killer) up close once the show had finished. 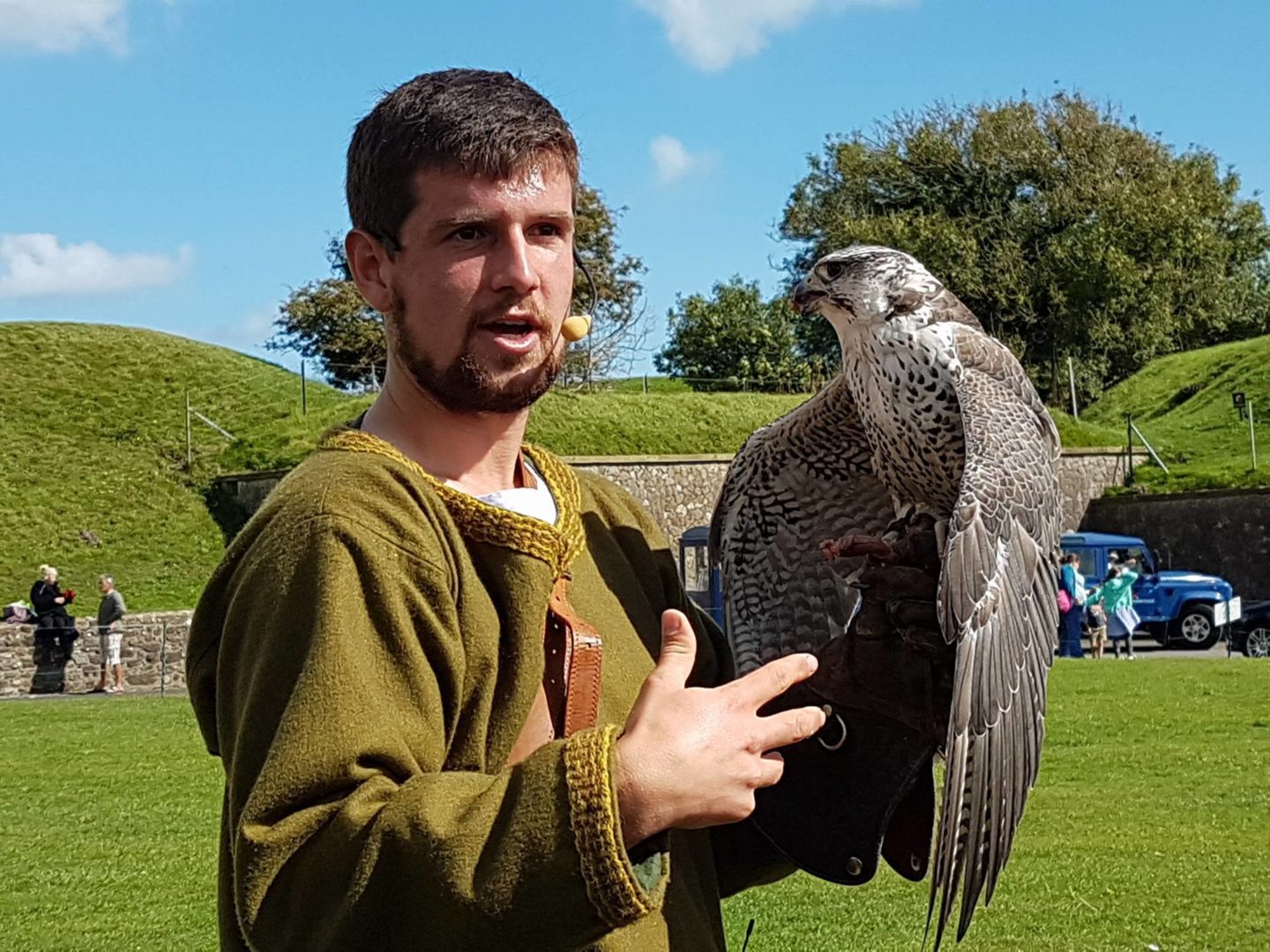 Waiting for the final show

There was an hour to play with while we waited for the final show of the day. As such, we decided to climb to the top of Dover Castle. I haven’t visited since I was 11 and had forgotten just how many steps they were. Having Autumn in the sling changed my centre of gravity in such a way that my knees absolutely killed by the time I got to the top!

It was worth it though. The weather was incredibly windy, but the views were fantastic. 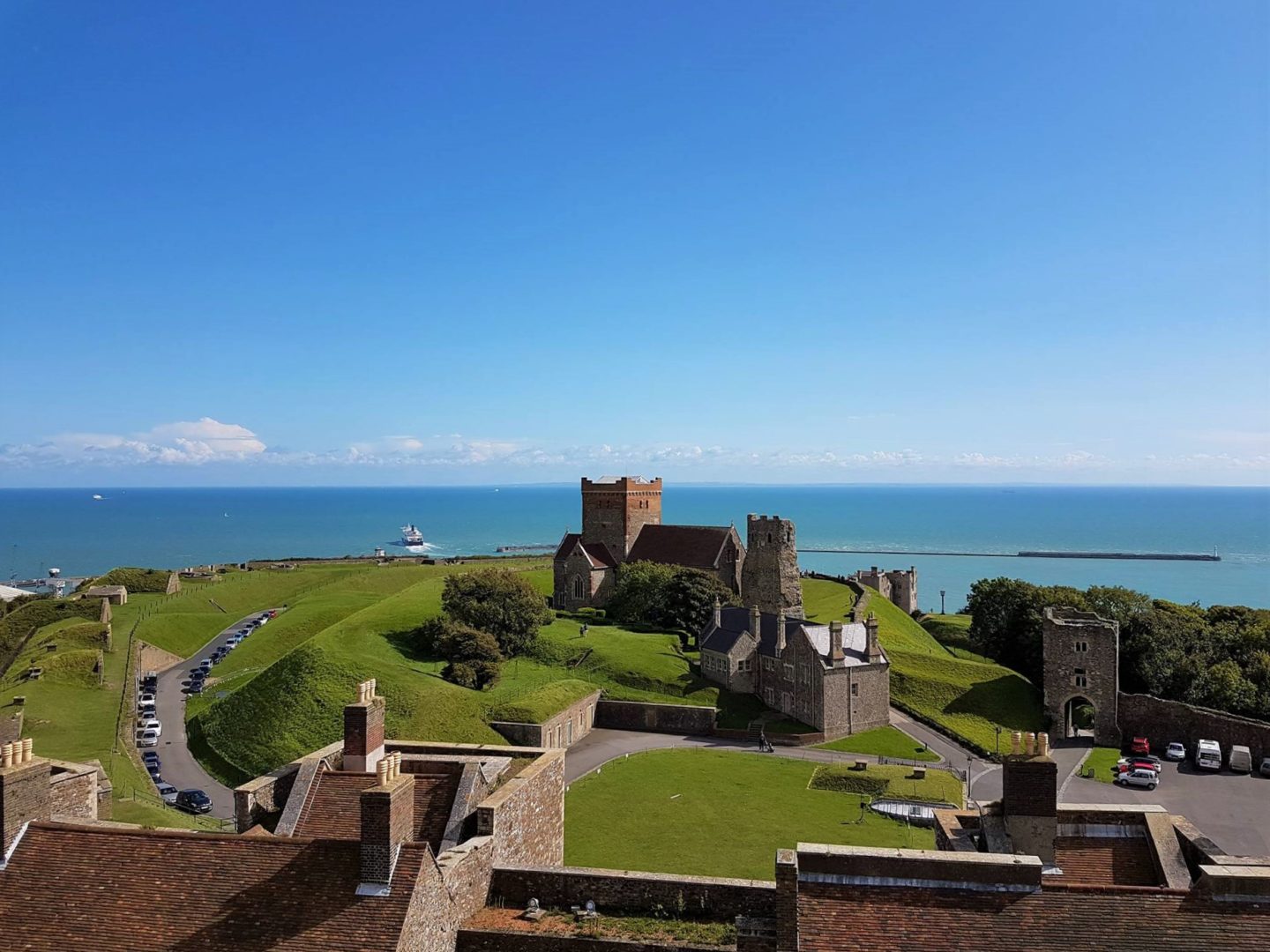 It looked as though some rain clouds were on their way to spoil our fun, but fortunately rain didn’t come until the evening. 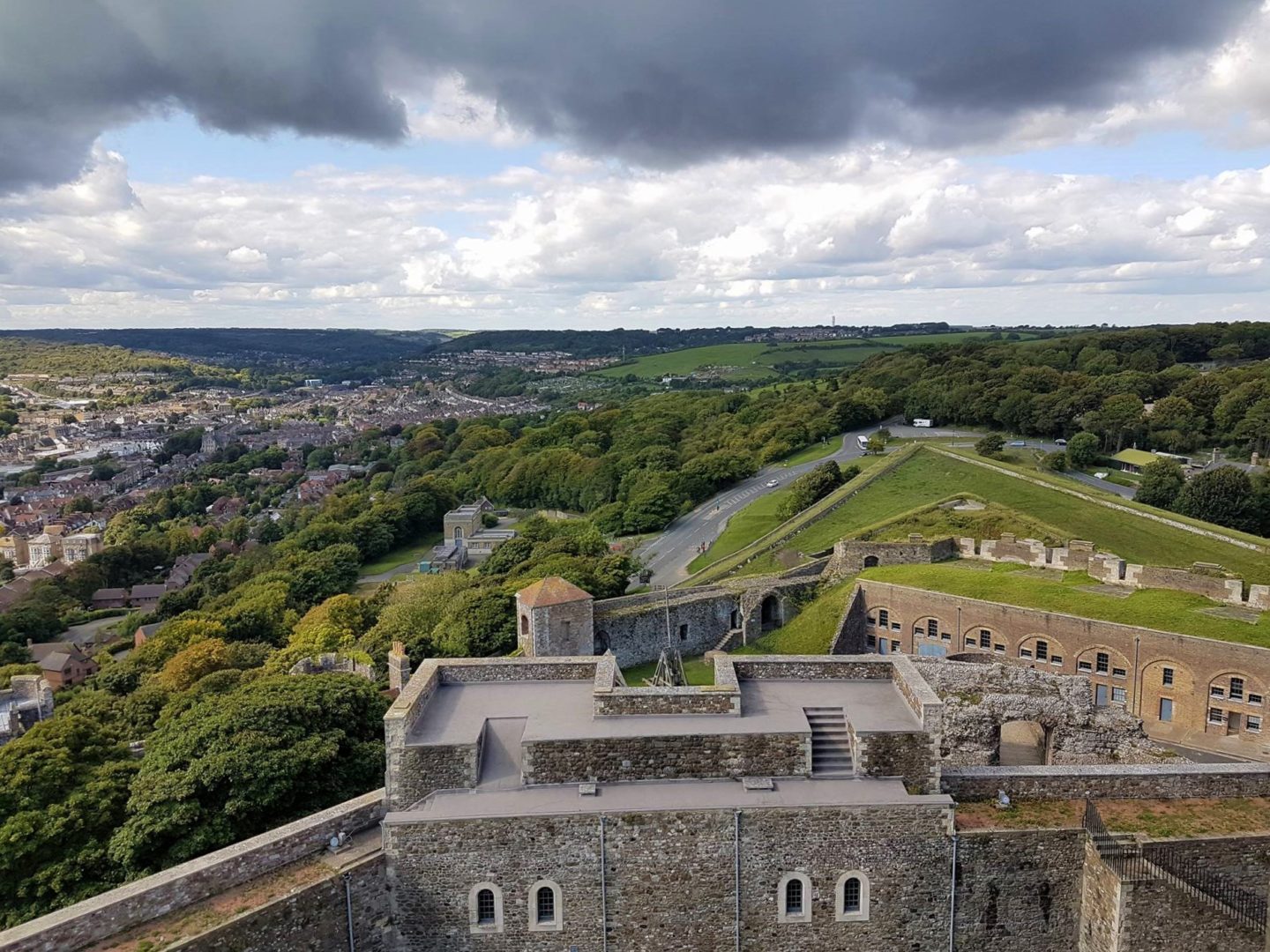 When we got to the bottom of the castle, we ate our sandwiches. Autumn took a liking to a seagull and was babbling away, shouting and smiling at it. She then started to try to get to it, lurching herself forward.

Once Autumn was clean, we set off to explore the castle grounds where there was a large catapult, as well as some canons. These were both very popular with children. 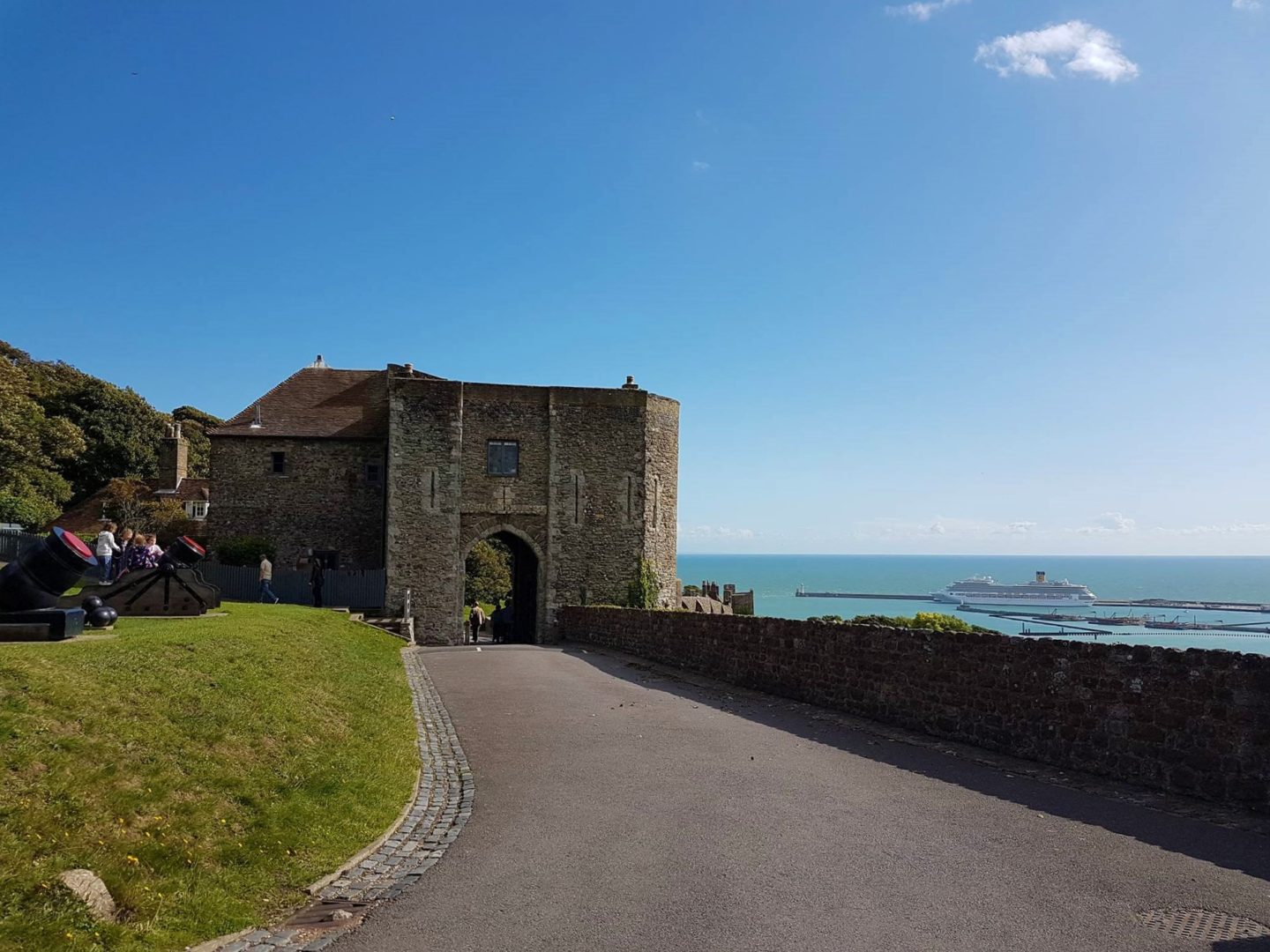 Even when you’re not right at the top of the castle, there are wonderful views across Dover and the English Channel. Of course, these excellent views are why Dover Castle was built where it is. It’s interesting how unlike many other castles I’ve been to, its grounds and structure are built across many levels. 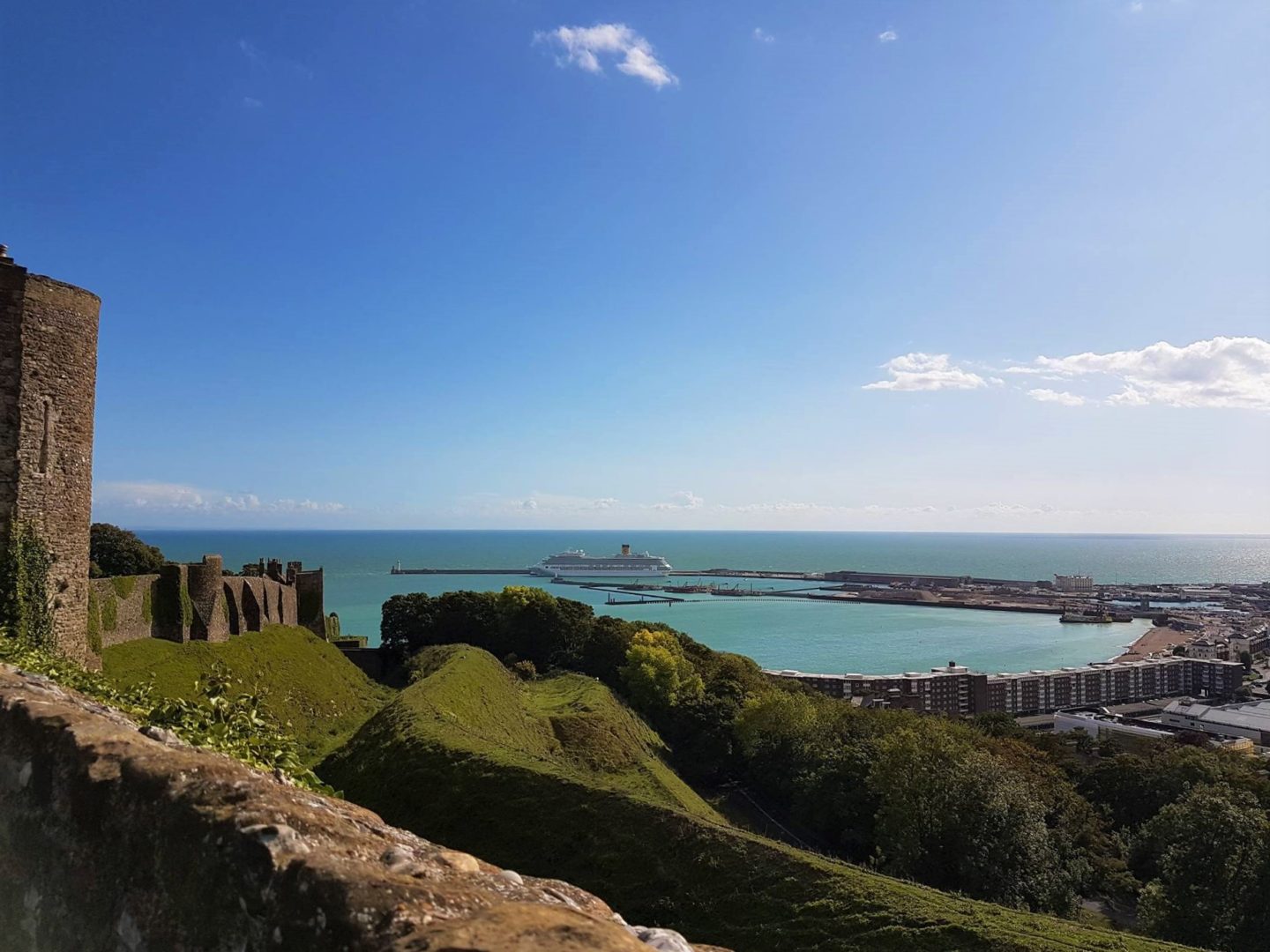 In this show, a buzzard was flown. James told us about the bird and why they’re not the best birds to use for hunting in a very comical way. They’re incredibly lazy and will sit in the same spot for hours waiting for something interesting to come to them. Centuries ago, they used to sit on church roofs defecating over them. The task of cleaning the roof was very time consuming and expensive. As such, if people killed a buzzard and took its head to a church, they would be rewarded with money.

I believe that the next bird we saw flown was a type of falcon, colloquially known as the King’s falcon. This was because due to being from overseas they were very expensive – roughly £250,000 in today’s money. Therefore, only a King could afford them! While this majestic bird was flown around, we were told some fantastic stories of medieval falconry. It was so interesting, I just wish I could remember it all. With a wiggly baby strapped to me and a swooping falcon I wanted to watch, I didn’t take notes.

Perhaps my favourite bird was the final one flown. Like some of the other birds, it kept flying in front of the sun in a bid to trick its prey. It was SO fast! At one point it swooped right between Dave and I and I heard the crowd “Ooh!” I think it was largely because it had been inches away from our baby (who was completely unfazed!) 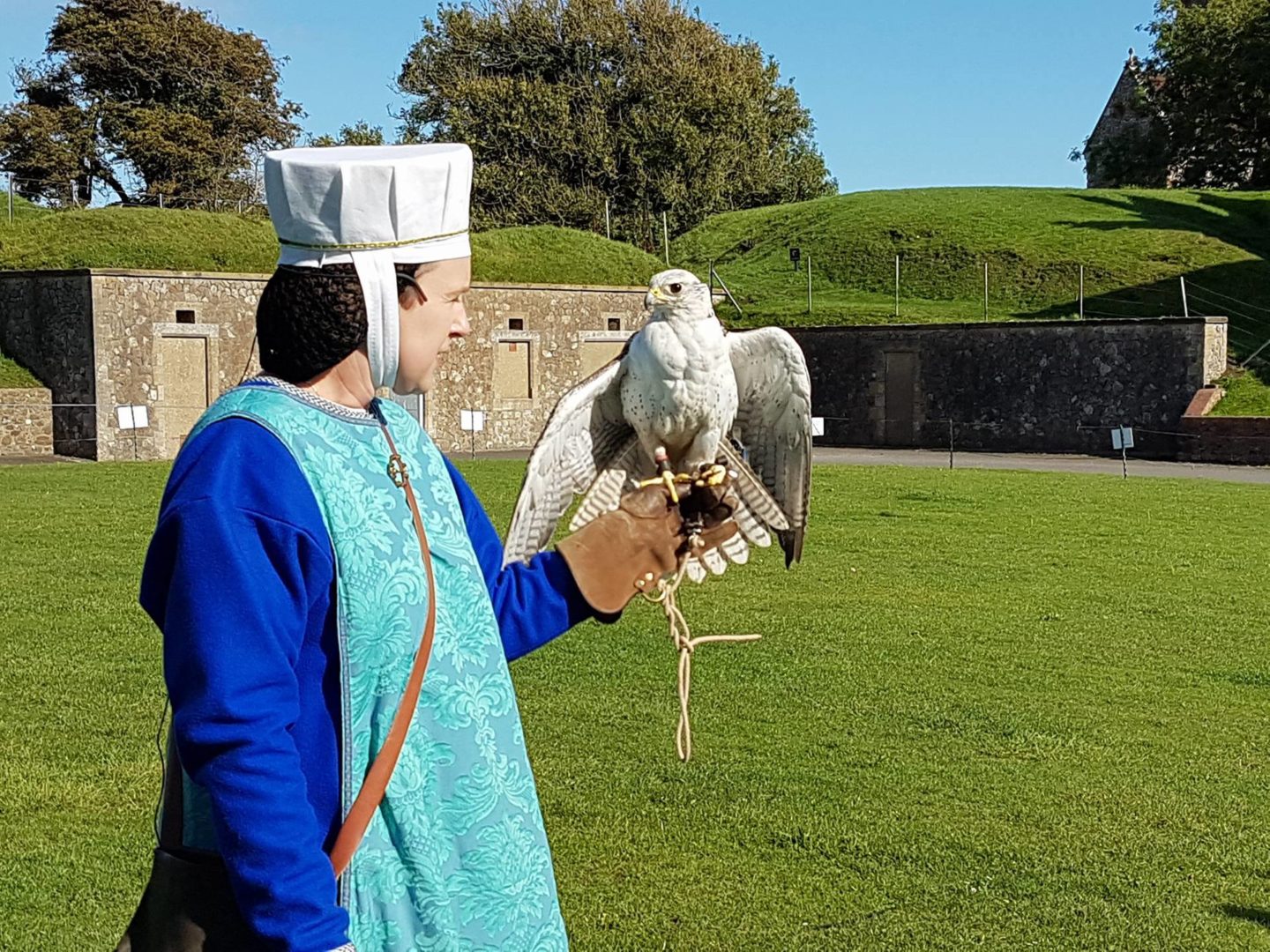 With great people, amazing birds of prey fantastic medieval outfits and interesting storytelling, Raphael Historic Falconry were great to watch and we really enjoyed our afternoon at Dover Castle. 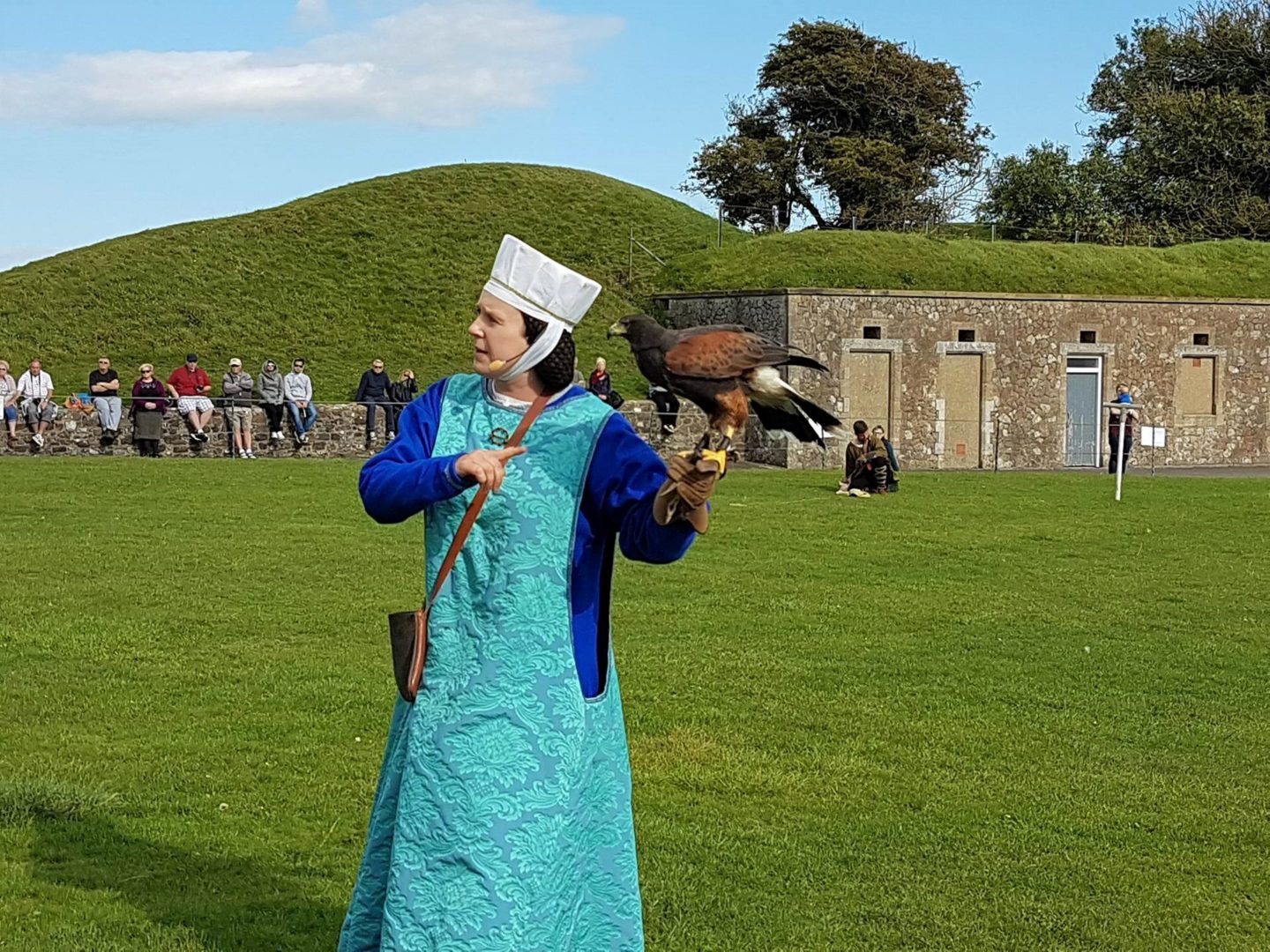 After the final show had taken place, we left. The wind was picking up more and it was starting to get chilly. However, I don’t recall ever going to see the white cliffs of Dover before, despite being from Kent! As they’re a 5 minute drive or less from the castle, we decided to go and have a look.

First though, we spent some time just watching ferries come and go. 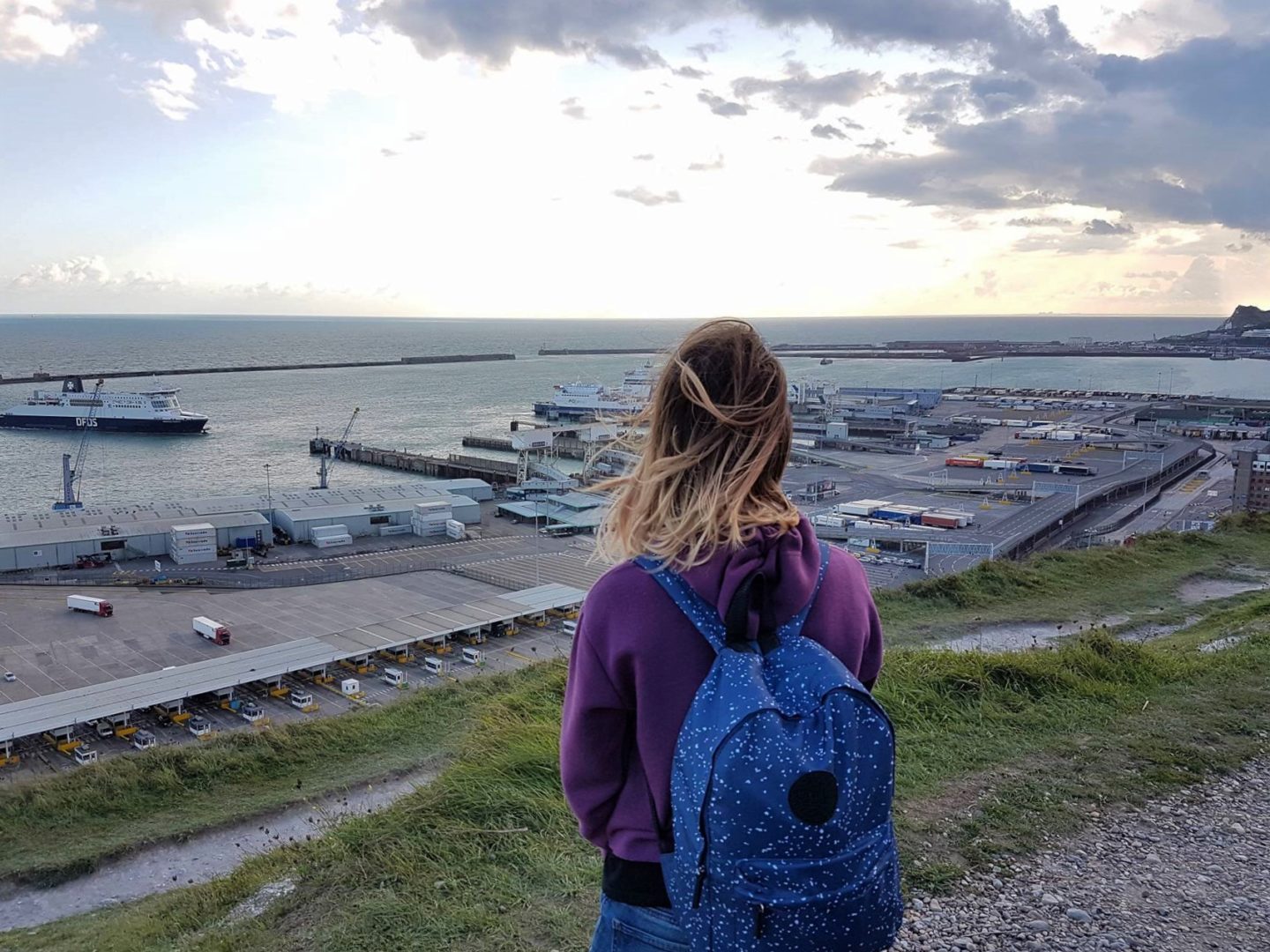 We walked along the path for a couple of minutes until we saw some chalky white cliffs, where we took a few photos. However, we were tired after a long day and the weather was really beginning to turn. 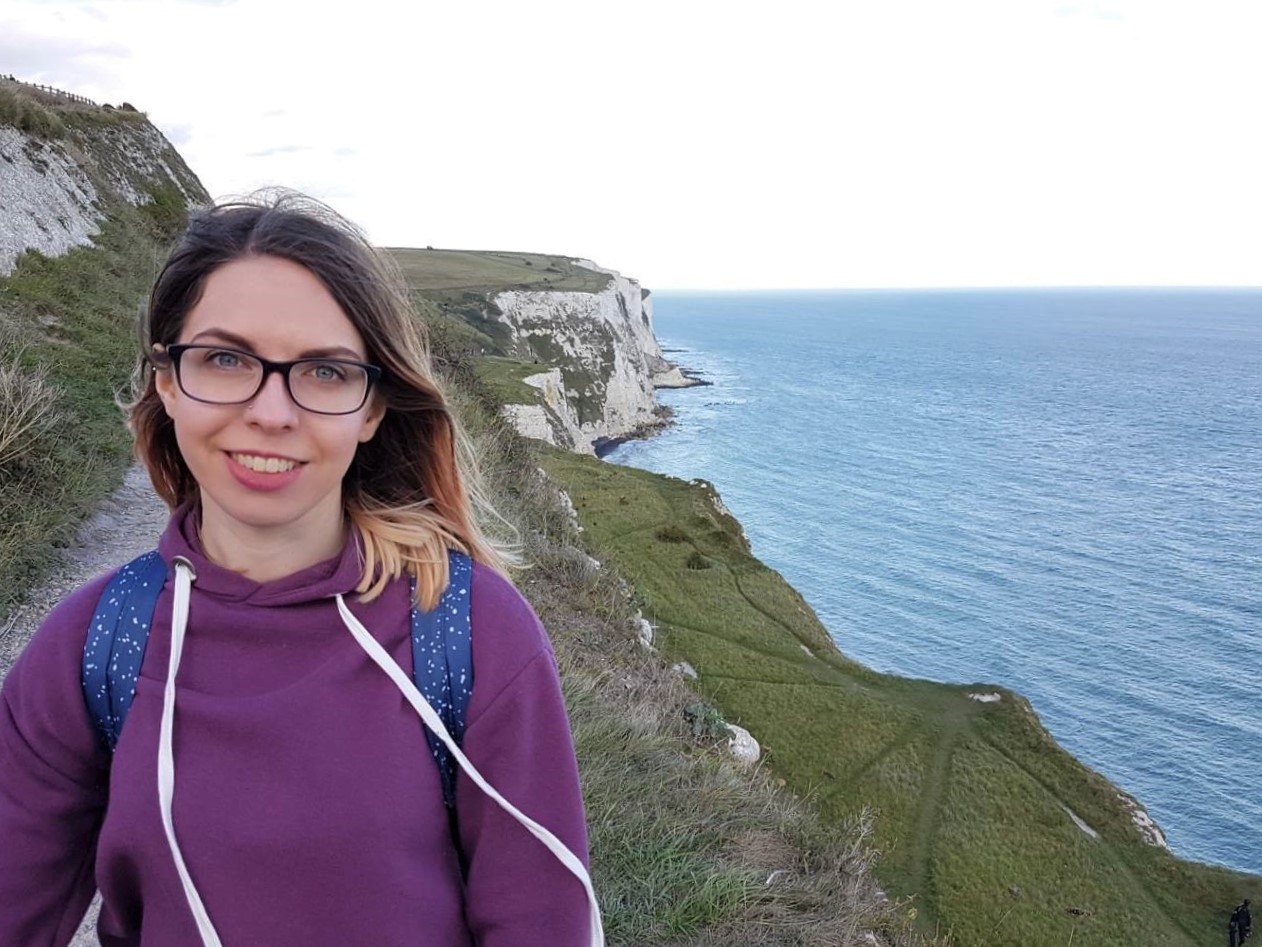 Autumn had the right idea! 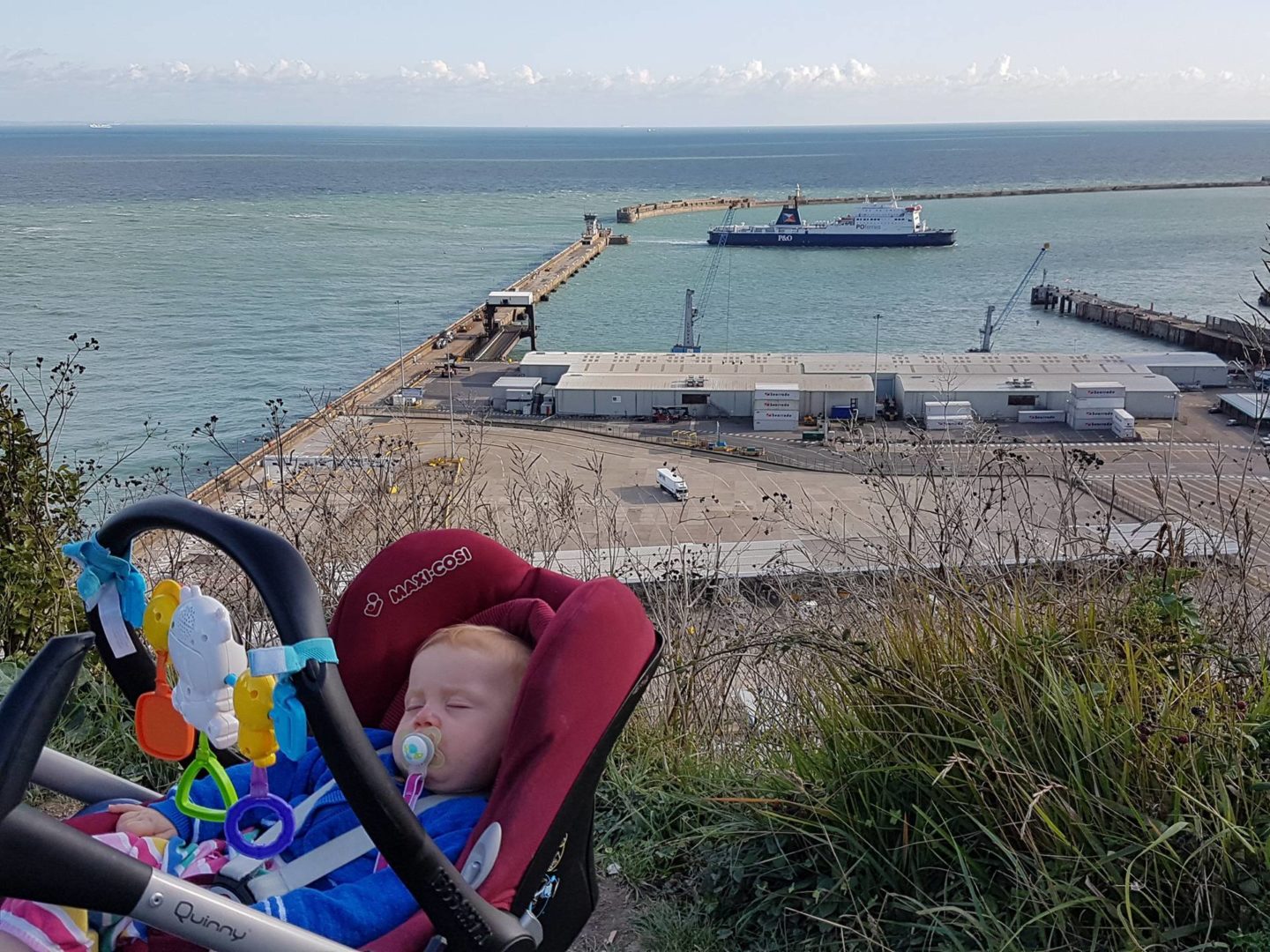 About 5 minutes after we got into the car again, it began to rain. Torrentially. We were very glad we’d not decided to walk along the path much further!

Once I was cosy at home and tucking into a hot dog, I thought about what a wonderful day it had been. On further inspection into Raphael Historic Falconry’s website, it looks as though they focus on other historical periods too so I’ll be keeping an eye out for any of those near us.

Acorn Dell at Hever Castle: A day in pictures

How to make your home office a hive of productivity

5 simple ways to refresh your bedroom over a weekend