I decided this week I’d like to review one of Autumn’s baby toys. So, which better one to choose than one of her most favourites? Her Nuby Zoo Chimes lion, which we’ve named Lionel, always seems to make her smile. He’s a great distraction technique while I’m tiredly stumbling around the room of a morning trying to find a jumper that doesn’t have baby sick on it, do the clips on my bra up correctly and trying not to put my knickers on inside out (I have an 80% success rate).

Lionel is a buggy toy, but has been clipped in the side of her crib since she was about 4 weeks old. According to the Nuby website, he’s not actually suitable for babies under 3 months. While she enjoyed looking at him and his bright colours when she was younger, he was always well out of her reach.

When Autumn started babbling, one of the first times I heard it was when I was waking up and in a slight daze. When I rolled over to look at her, she was looking up at Lionel and babbling – trying to talk to him! This has continued, she still loves trying to have a conversation with him.

When she got to 3 months old, she loved to hold him and look at him. However, it’s only recently that she’s been able to shake him around enough to make the zoo chime noises. Unlike a rattle, it takes a little more force to get him to make noises and she only just has that amount of force and coordination.

He’s great for tummy time – you can see the look of determination on her face as she tries her hardest to crawl towards him! Since she’s been teething she also likes having a good chew on him too. I’m so pleased that she likes him; they retail for £6.99 on Nuby’s website but I think I got him for less than that in a baby event at Aldi in Spring 2016. He was one of the first things I bought for her when I knew he was expecting and I remember making the chimes go above my belly in case she could hear him. Whether or not she could, she definitely enjoys his noises now. 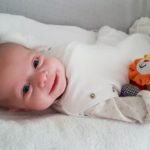 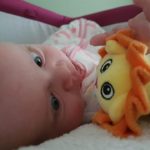 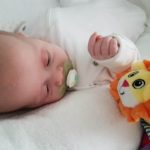 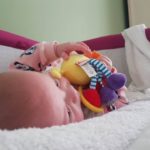 As well as a lion, they also do a bug and a zebra. I’ll definitely be keeping an eye out for them as she loves Lionel so much!

Thank you for reading this review. I purchased Autumn’s Nuby Zoo Chimes lion with my own money and this post was not written in association with Nuby, all views are my own.

Going Into Labour; How Do You Know?

When I found out I was pregnant – Beauties and the Bibs